The 1938 look out tower still stands in Wombat Hill Botanic Gardens in Daylesford, giving superb views over the century-old trees and the distant dormant volcanoes on the horizon

I must have driven through Daylesford 100 times, never realising until now that the Wombat Hill Botanic Gardens are just a couple of blocks up the hill, and clearly visible from the road. 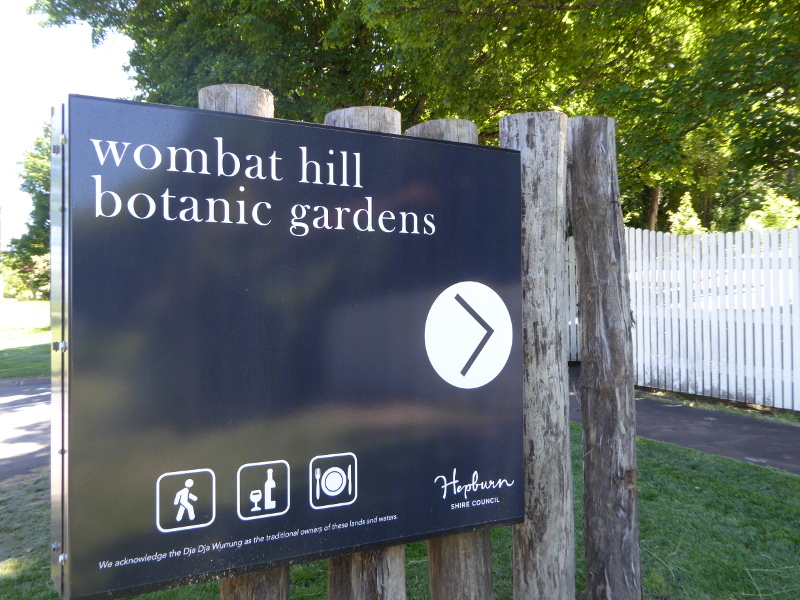 One thing we can say after visiting about eight of the botanic gardens in Victoria now is that they are all so different, and each worthy of a visit in their own right. 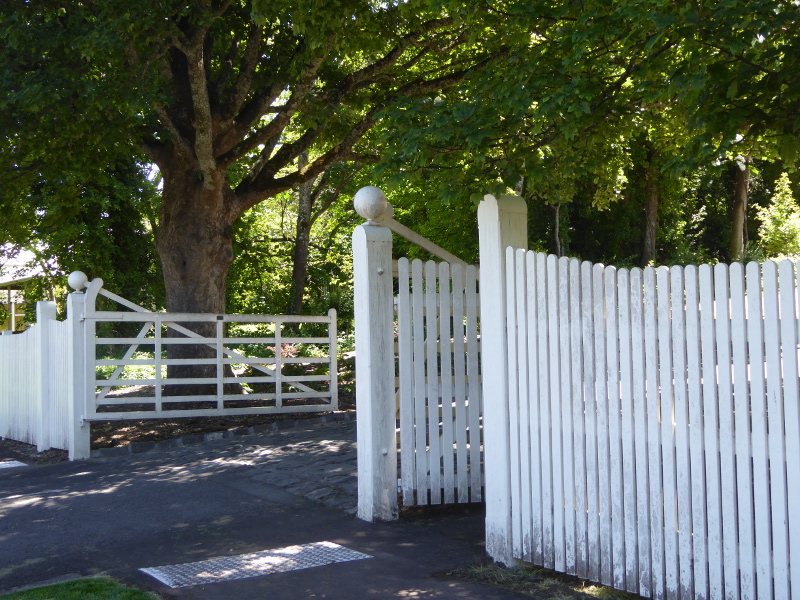 The botanic gardens in Daylesford seem to have no sport or recreation areas, meaning they never went for the tennis or bowling greens set among the trees. There seemed also to be fewer actual flower beds than in many other gardens we have been to so far, though that could also be the time of year (the rhododendron, for example, looked as if it had just finished blooming, with purple confetti on the ground under some trees, and only a couple still hanging onto the last moment of flowering for this year). 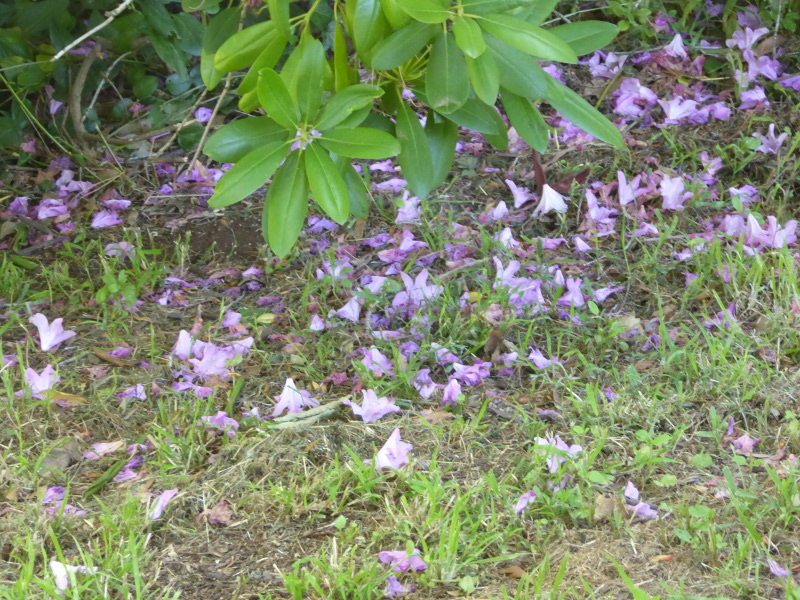 But Wombat Hill does have magnificent old trees, some clearly so tall now that they block the extensive views over the surrounding lands, which early commentators talk of. 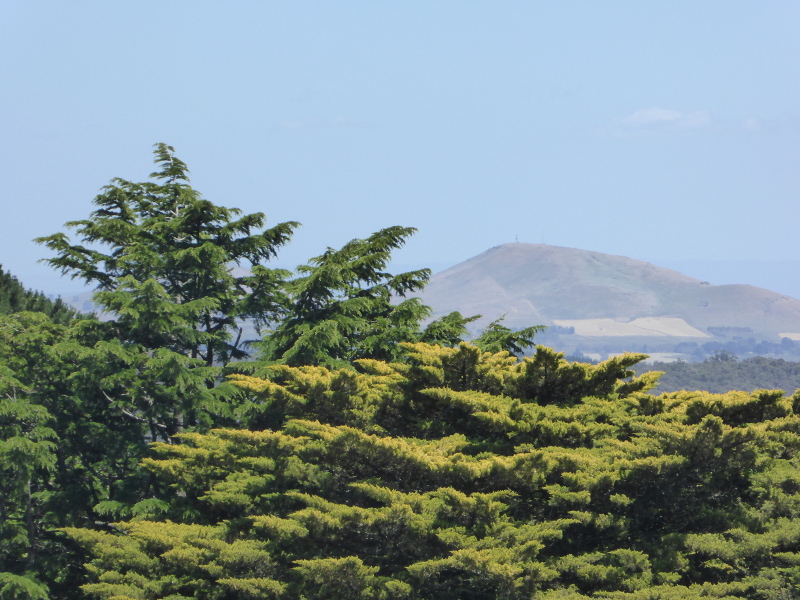 These gardens also have something unique:- a 1938 look-out tower, and although it’s fairly austere looking., it does have some nearly art deco features.

The climb up here is steep and narrow. You need to negotiate the 78 stone steps of the spiral staircase, and it’s dark in places, so mind your footing on the way down. The few windows there are in the tower all pretty much face the same way so there isn’t much to make you stop on the way up. 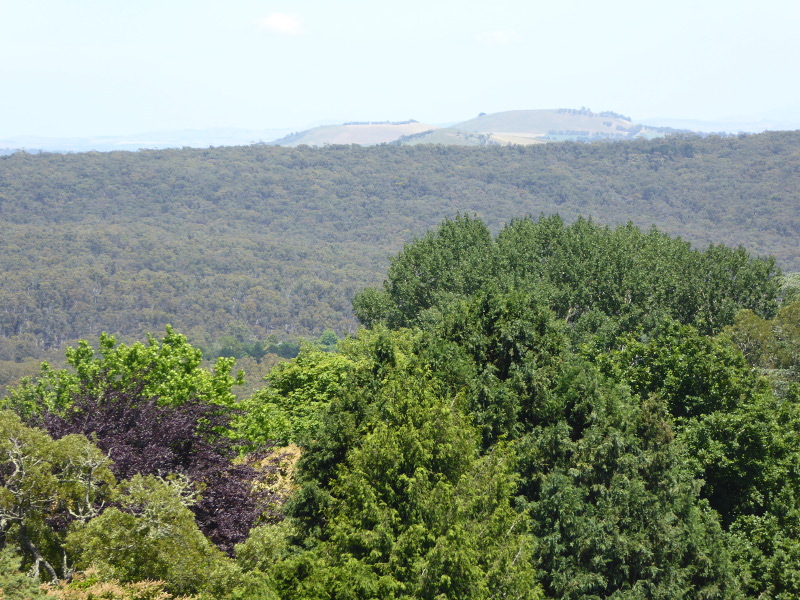 But the views are stunning up at the top. Just beware if, like me, you tend to get a bit of vertigo. I didn’t stay long up here, and it was definitely more exposed to the breeze. A great spot to look out and spot the volcanoes lining the horizon all around. 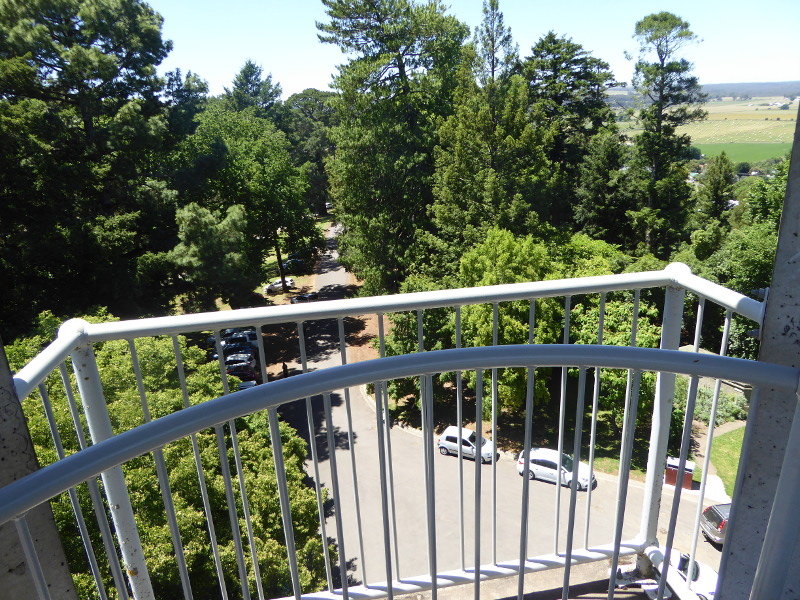 It’s apparently the volcanic soil of these gardens which made them so fertile in comparison with much of the land around here, spoilt also by years of gold-digging in the years just before these gardens were established. 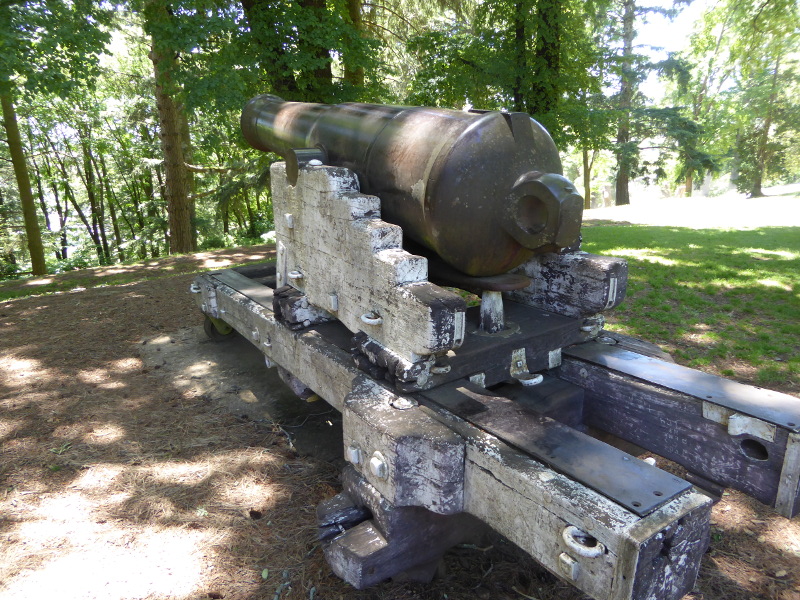 Next to the tower is a large cannon, with no labelling I could see to tell us when it dated from or why it was placed here – but see one of the stories below for a guess at which war it might have seen action in… 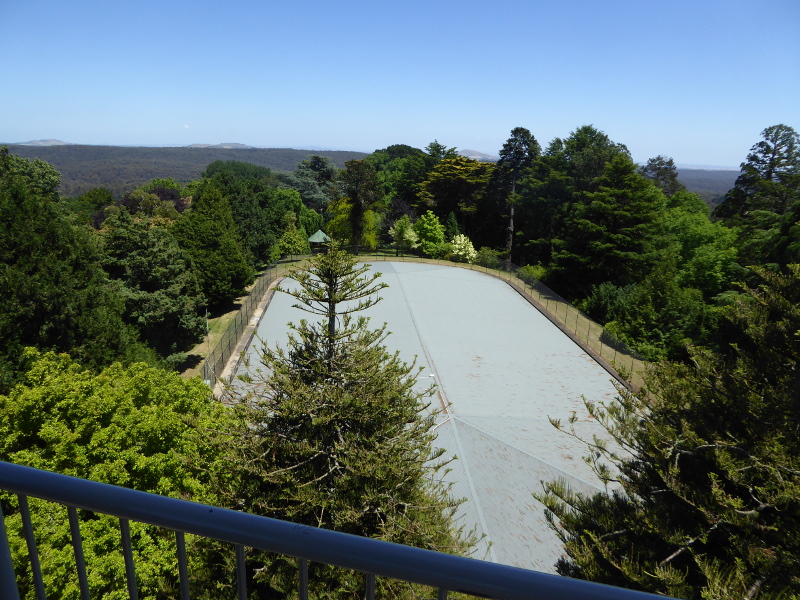 There is also the covered reservoir, its roof visible from the top of the tower. I think it might once have been a lagoon or lake (and I think I read of a small boy drowning here over a hundred years ago), but it clearly supplies the gardens (and probably the whole town with its water supply). 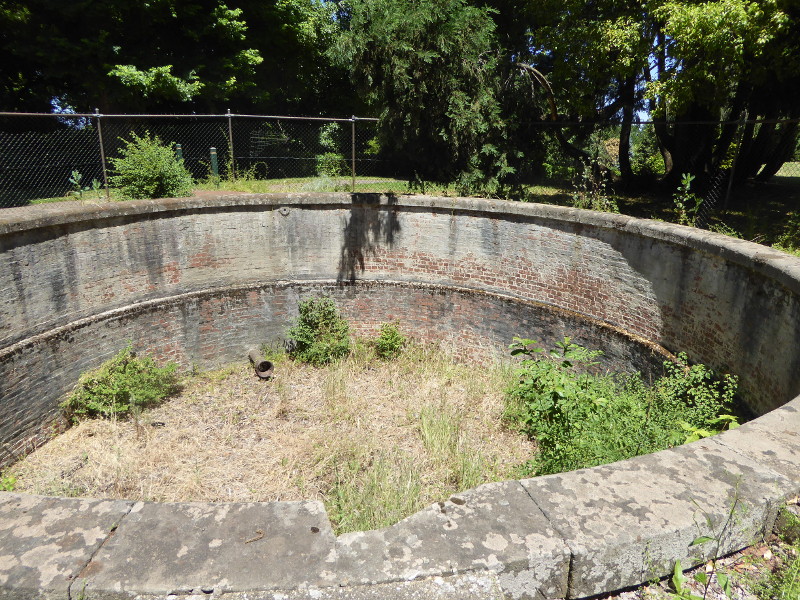 I have no idea what this brick structure next to it is, and again no signage to help out. Anyone know? 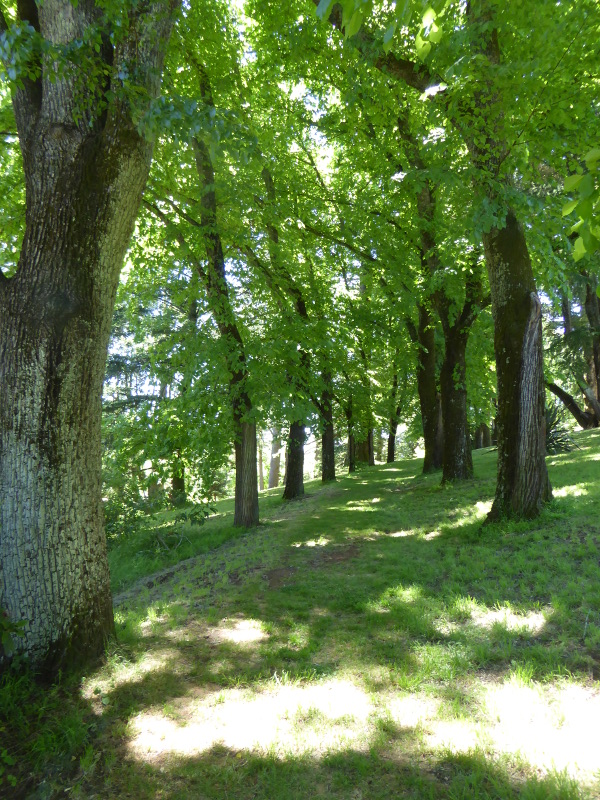 Apart from the watch tower (apparently used in WW2 to look out for planes), my favourite things in the Wombat Hill Gardens are the two dutch elm avenues. I had no idea dutch elm still thrived anywhere in the world after the disease which ravaged the tree from the 1970s, but these are magnificent, one dating from the 1860s and one from the 1880s. Judging by the size of these trees, I can imagine some of the specimens still date from that era? 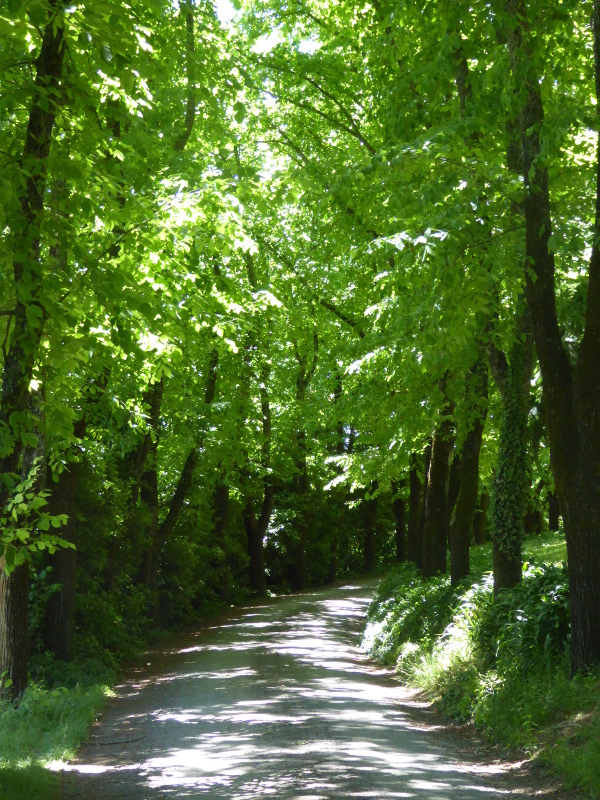 One avenue is grassy and has a walking path; the other is part of the scenic drive through the gardens, so you’ll have to watch for cars here. 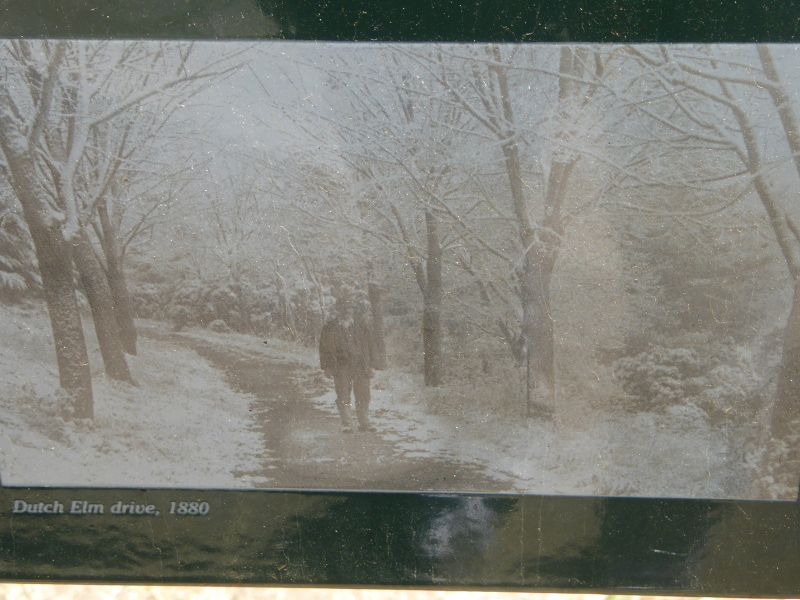 Overall the gardens have a feeling of wildness, of being maybe initially designed but then left to grow almost organically. Even the bedding plants had a cottage garden feel to them, which we much prefer to the manicured beds you see in some botanic gardens. 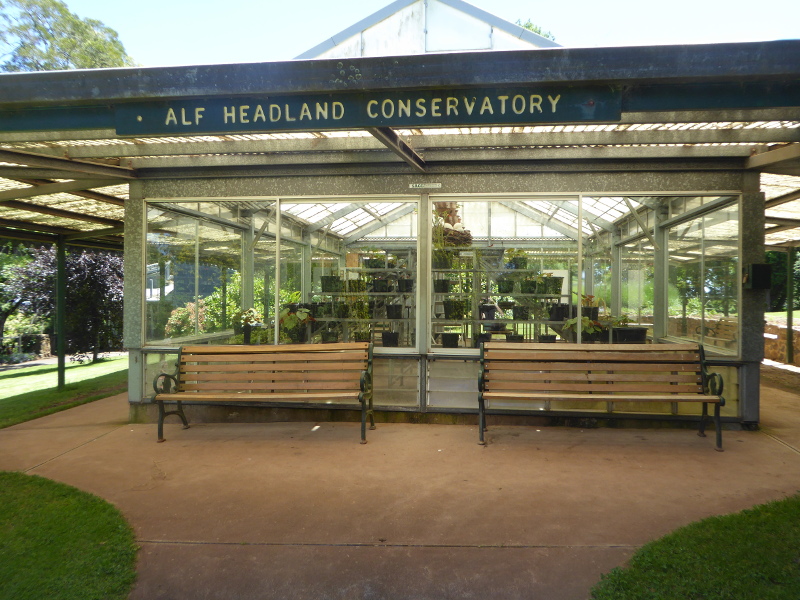 As usual the various curators and gardeners left their mark in different ways. Curator Gascoyne (his name alone seems to have been spelled in many different ways) started a begonia collection in 1885. I’m not sure how long they were left to fade away, but there is a nice story by the (1980s) greenhouse of how gardener Alf Headland found a few begonia tubers in 1956, and he nurtured the collection back to life, so the greenhouse is named after him. 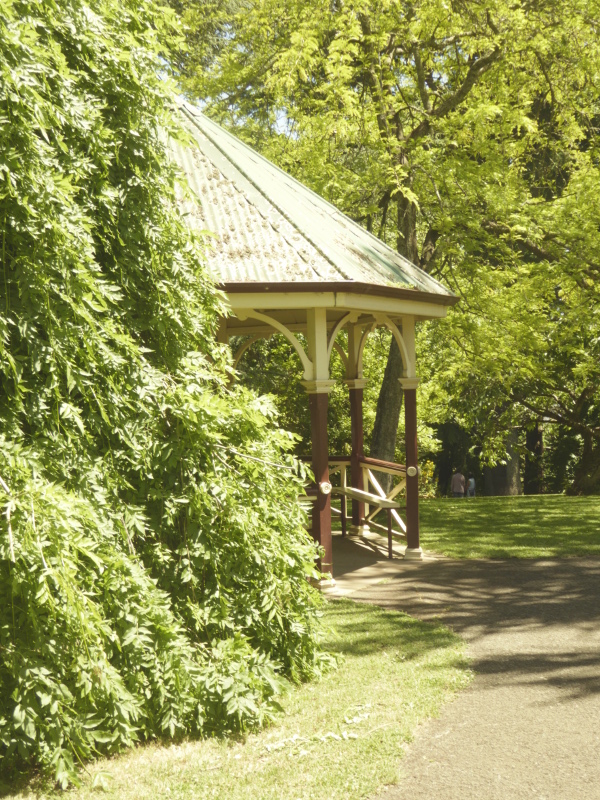 Gascoyne was also apparently responsible for having a bandstand or rotunda installed, but this is no longer with us, sadly. The current rotunda is apparently not vintage, but quite attractive still anyway. 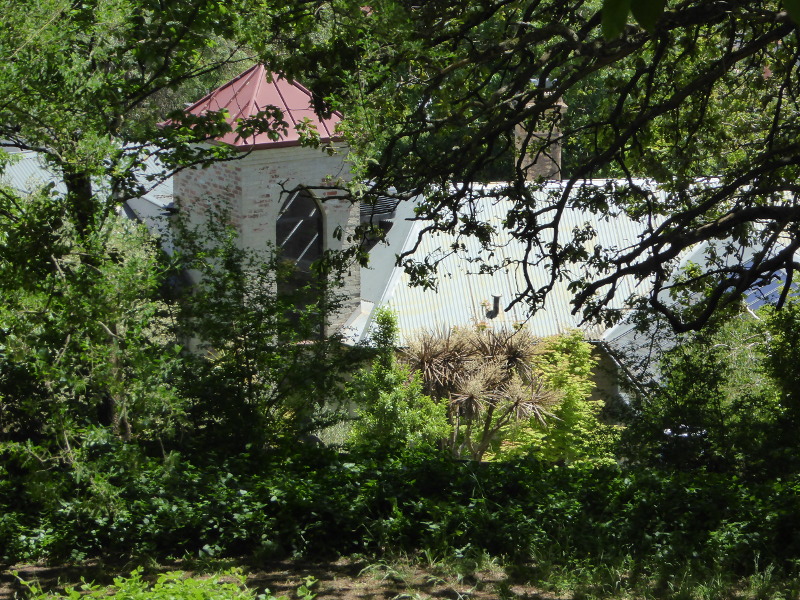 Down at the lower level, as you walk along the roadway elm avenue, there is a glimpse of the convent, with its attractive walls and roof visible down through the undergrowth. That must have been a magical place to go to school – provided the nuns let the kids roam a bit in the woods… 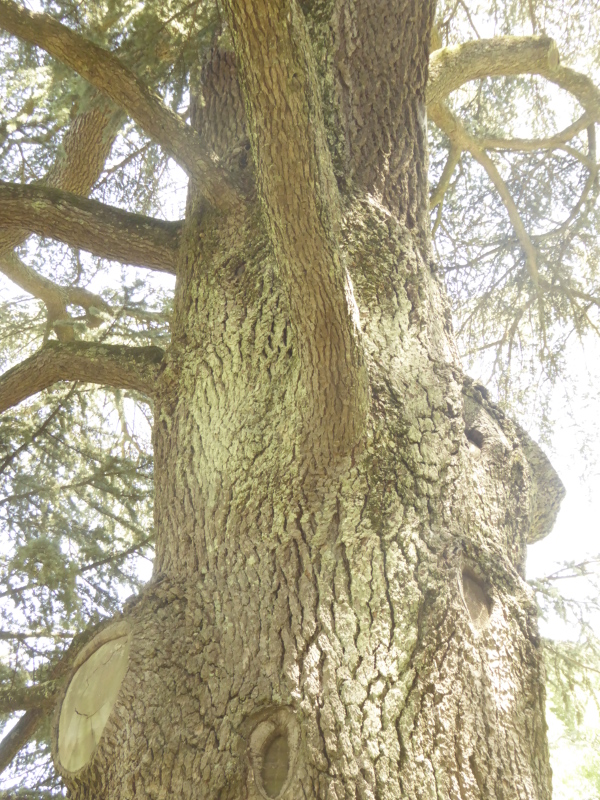 Some of the cedar trees here were absolutely massive, bigger than any we have seen elsewhere. We didn’t spot the Californian redwood, though – is it still there? And we just didn’t see the redwood for the trees?? 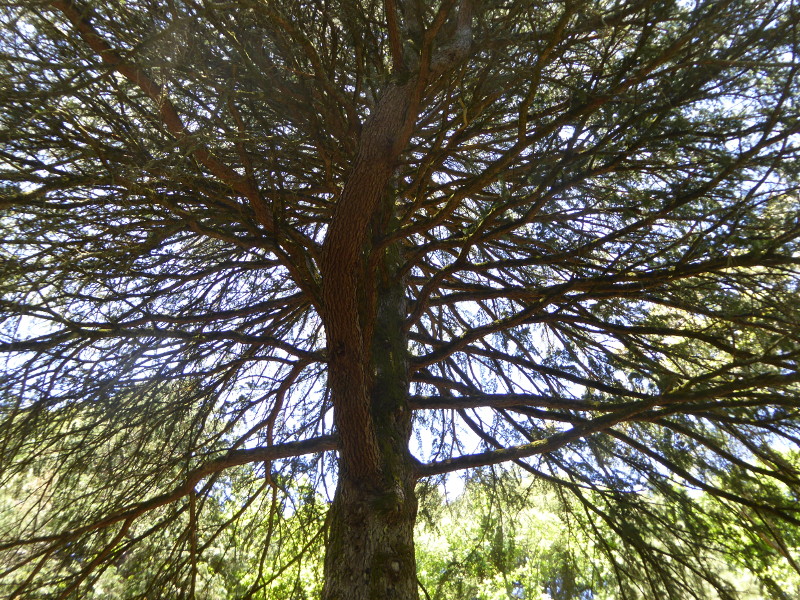 Other trees were just stunning in their size and spread. And came from very exotic origins – the West Himalayas in this case. 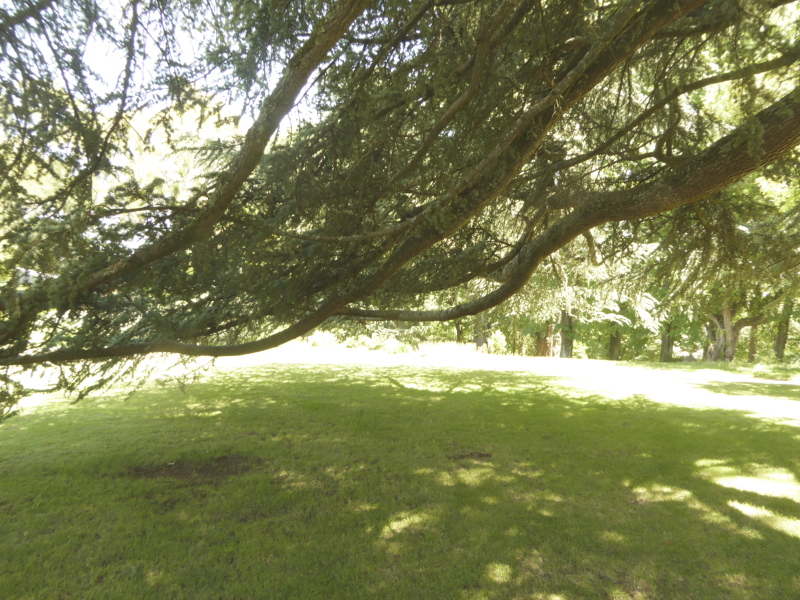 We really liked Wombat Hill Botanic Gardens, and resolved to return to test out the shady walks on a steamy hot day in mid-summer just to gauge how much cooler it is up at this height and under these trees. Can anyone confirm how lush that is from their own experience?

Oh, and as for wildlife, the best we could come up were the wombat and snake sculptures, which I’m sure are a more modern addition, but rather attractive too. 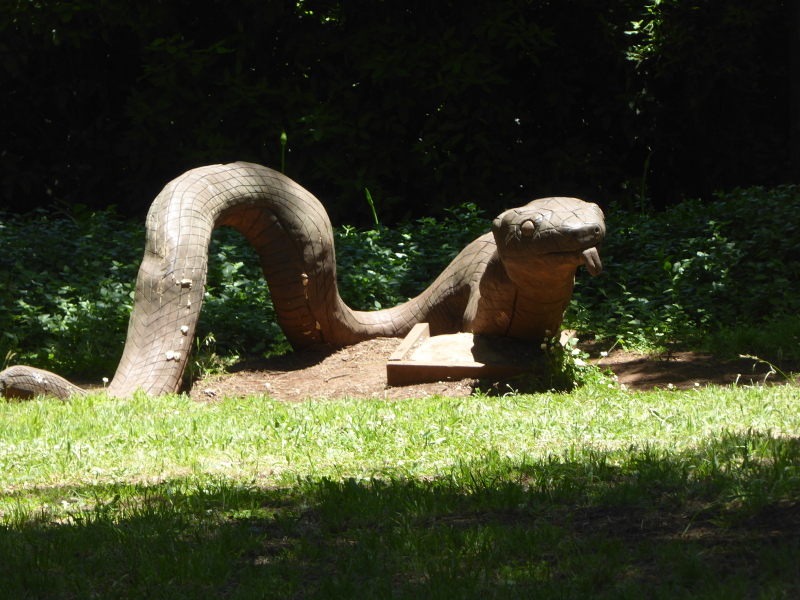 Some small animal did scurry across our path at one point but it was too quick for us to identify it, let alone take a photo.

As far as I could see, access to the Wombat Hill Botanic Gardens is possible at all times.

There are probably fewer benches than we had seen in other botanic gardens.

There are toilets in the cafe complex in the centre of the gardens..

According to one newspaper marking the moment 40 years later, 9 November 1869 was the date a number of Daylesford residents turned up at Wombat Hill with picks, shovels and a plough, to mark out the pathways and plant beds for the new gardens. Apparently, such was the local excitement that local brewers provided casks of beer, local grocers, cheese and biscuits, and local bakers loaves of bread for the willing volunteers!

According to later reports, a bullock was roasted whole to mark the opening of the Gardens.

An early curator was a Mr Allen, who went on to be employed choosing and planting trees for railway stations around the state. I wonder how many of his efforts are still alive today? In the 1880s the curator was Mr Gascoyne; In 1917, a Mr Cooper managed to keep up the blooms even in wartime. Mr Cooper was apparently so well-liked that even the principal of the local state school asked the council to lend him out to advise on improving the look of the school grounds. This also in wartime.

Views down over the Daylesford area – 1882 during severe bushfires, crowds climbed up to the Wombat Hill Gardens to watch the fires on the surrounding lands. Then some decades later, presumably with the trees by then starting to grow taller, in 1914 a snow storm led to joyous street scenes, with views from Wombat Hill particularly striking, newspapers reported. A Ballarat photographic company had postcards printed within hours of the people in the snow.

A 1905 grass fire got a bit close for comfort to the gardens, burning part of the Convent fence just below the perimeter of the gardens.

An 1885 piece spoke of the improvements in the Gardens since the arrival of a new curator – Mr Gascoigne – a year earlier. He had managed the careful system of watering, from the large reservoir, which still exists today, although now covered, and then using gravity helping to direct the irrigation over the slopes of the Gardens from the summit of the hill.

There may not yet have been a dedicated cinema in Daylesford, but by 1915 the Town Hall was hosting occasional movie nights, including one featuring footage of the Hospital fund-raiser concert in the Wombat Hill Gardens. Probably none of that footage survives over 100 years on…

A 1924 letter from a schoolgirl to a newspaper reveals that the lagoon was not covered then, the big gun was already there (so maybe a WW1 relic?), and there was still a rotunda and shed in the gardens.

Reports linked to the Gardens were nearly all about band concerts and the curator’s displays, but in 1925, the gardens got caught up in a police operation, when a man was arrested for stealing bottles of beer, a case of whisky and a case of schnapps and then burying his booty in the Gardens. Most of the drink was found by police. I wonder if the rest of his haul is still buried somewhere?

A 1935 report mentions a Californian redwood, which I think might have gone by 2020 (or correct me if I’m wrong – and tell me where to find it?). A 1937 report spoke of two acorns being planted to commemorate the coronation of George VI – did the oaks survive to 2020?

In November 1938 the tower was opened to look out over surrounding hills. A tea kiosk opened not long after that, followed by a glasshouse.

Again Trove stories dried up after that, so I’d love to hear from anyone with an anecdote or an experience to recall in the years after 1938…

What are your experiences at Wombat Hill Botanic Gardens?

Has anyone got any stories to bring us up-to-date from 1938 to today – stories linked to the botanic gardens, of course?

Can anyone help by telling us what the empty brick structure is next to the look-out tower?

Did I miss the Californian redwood, or is it no longer with us? And did the two oaks planted for George VI’s coronation survive to 2021?

Or does anyone just have a good memory about a visit to Wombat Hill Botanic Gardens that they’d like to share here, even from the last few months or years?

Other links and writings on the Wombat Hill Botanic Gardens

The Friends of the gardens have their own website.

I see the Talking Plants blog liked the same horizontal trunk of the Himalayan spruce.

Cowboy JoJo’s adventures channel on YouTube has a nice video shot in the Botanic Gardens.