Beautiful 1920s arcade in Terang, in Victoria’s West. Lots of original features still, though I wonder where they used to hold the tea dances in the arcade’s early years.

Johnstone Court is a delightful little art deco gem of an arcade in the Western District of Victoria. Since there is no website for ‘arcades of Victoria’, and most people searching for vintage arcades will go to Melbourne’s beauties already reviewed here on Vintage Victoria, Johnstone Court probably isn’t that well-known outside Terang, but I read about it somewhere on my travels, and the more I researched it, the more I wanted to see it. It was well worth the long drive on a cold Sunday morning, with the town of Terang quiet as Victoria slowly emerged from the COVID-19 restrictions. 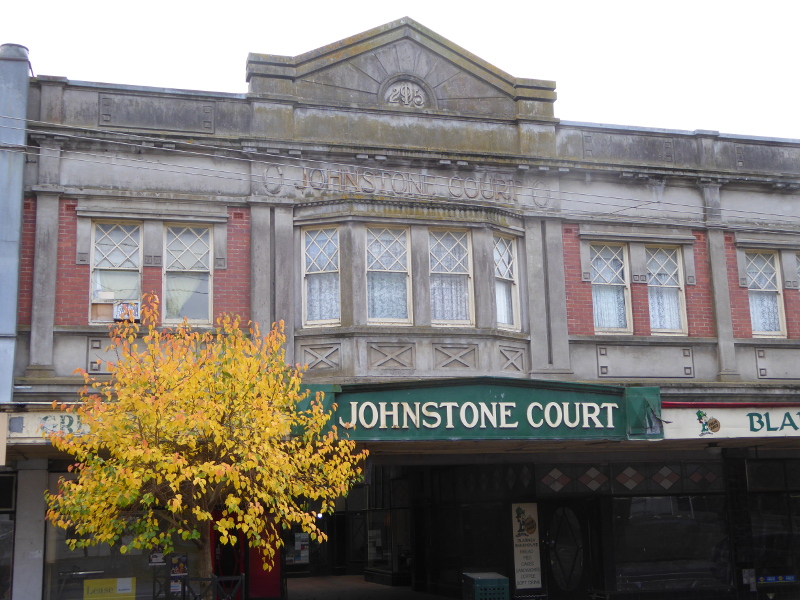 Johnstone Court was built in 1925, the year carved out on the stone façade looking out over the Terang High Street. Even the lettering here is intricate, though, and you have to look fairly carefully to decipher the numbers. 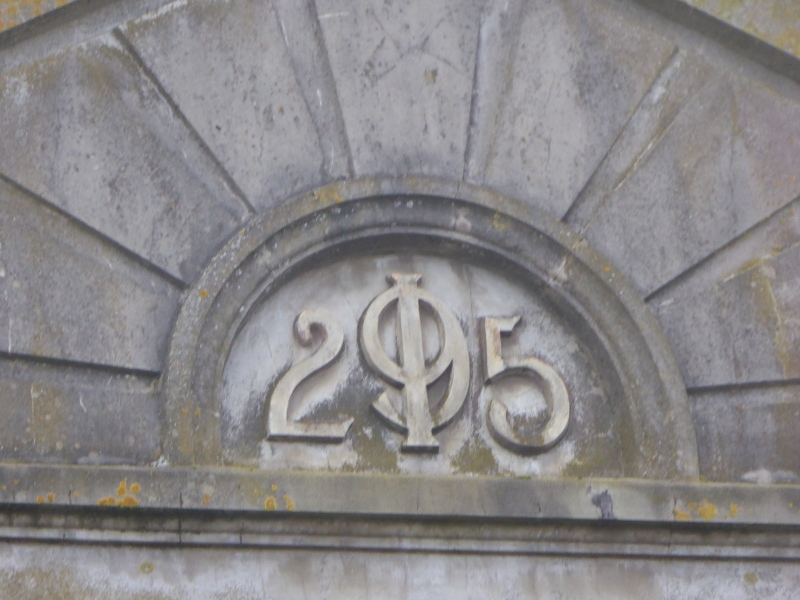 There are several shops still resident on the street frontage of the building, including the bakery and greengrocer, the latter being the only business open on this Sunday with little footfall around the town. 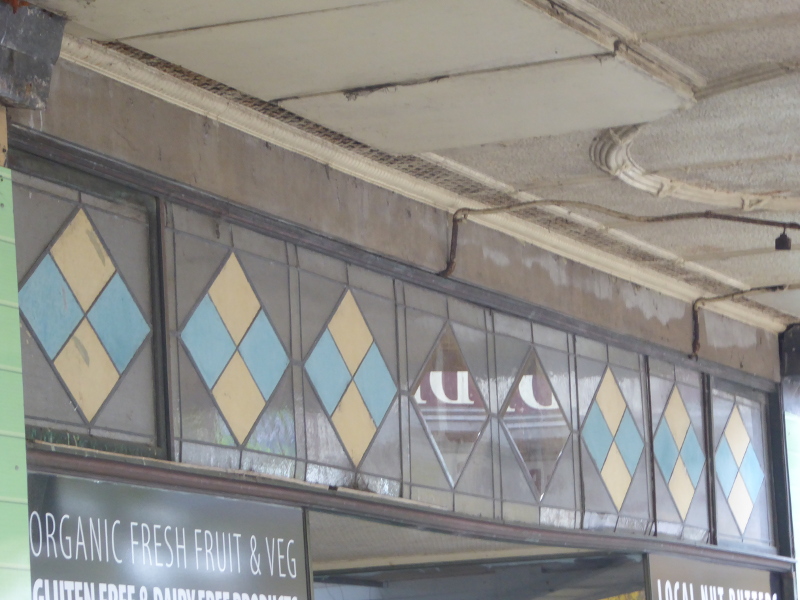 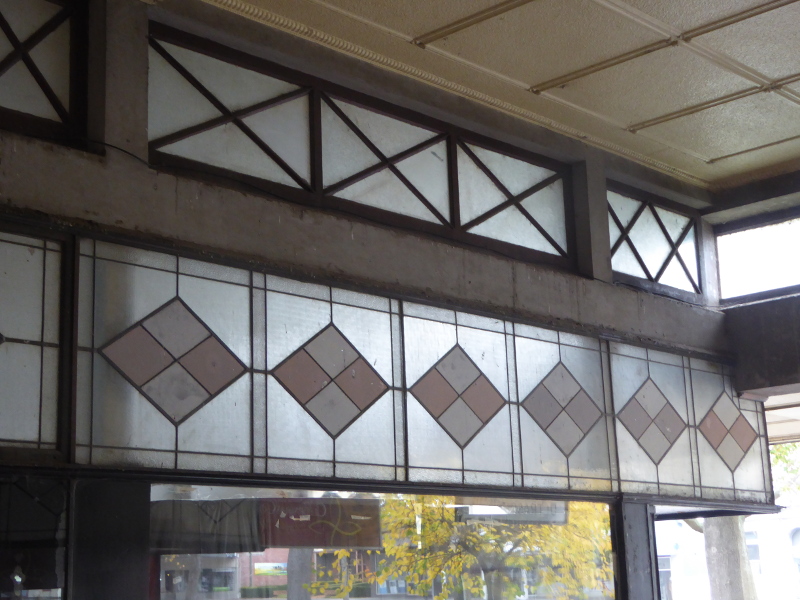 And the name of the arcade is spelled out in the lovely tiled entrance, with autumn leaves still blowing about to give it some colour. 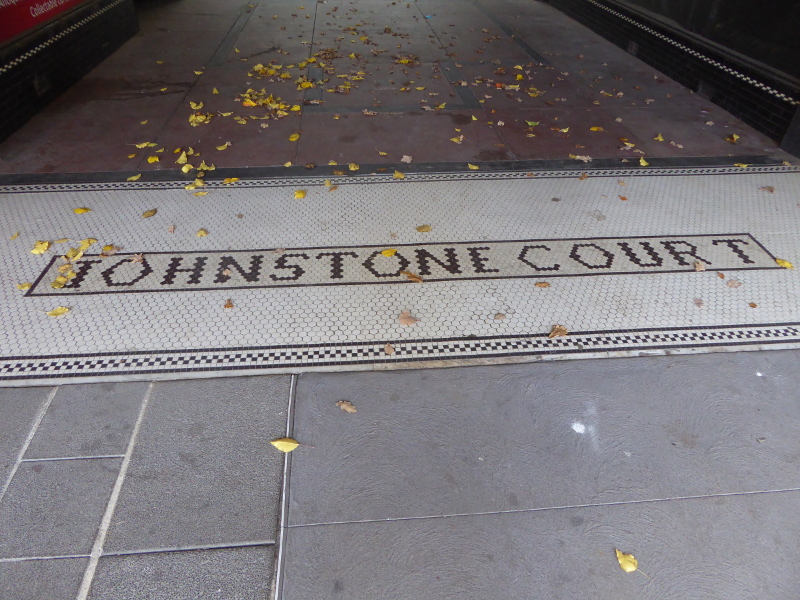 It’s only a short arcade, and there only ever were three businesses at most trading onto the internal court of the covered section, but I found myself wondering where the café used to be, which figured in most of the press clippings I found on Johnstone Court, and how on earth they managed tea dances in the small space under the glass roof. But I guess in a small town like Terang, a good tea dance might have only had a handful of couples moving about, and maybe there was enough room for that. 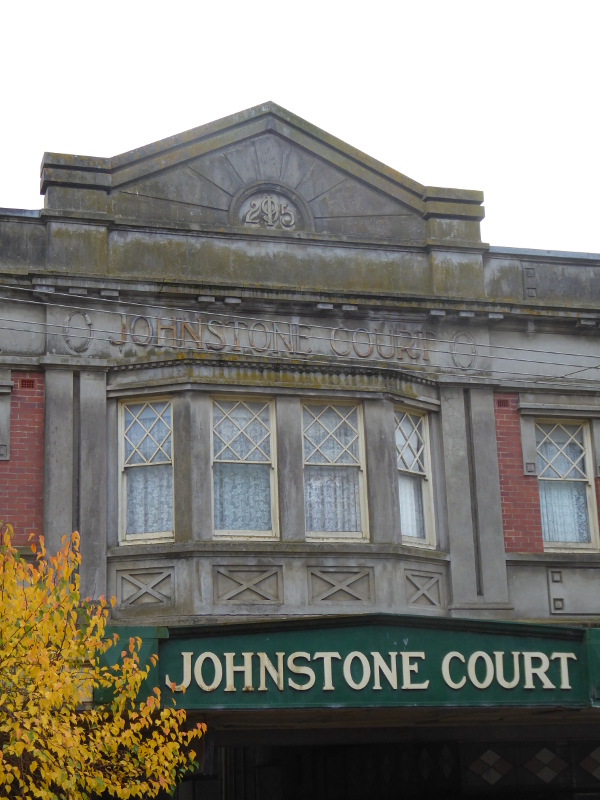 Up above in that open area at the back of the arcade is the name of the State Electricity Commission, which was one of the early tenants in Johnstone Court. 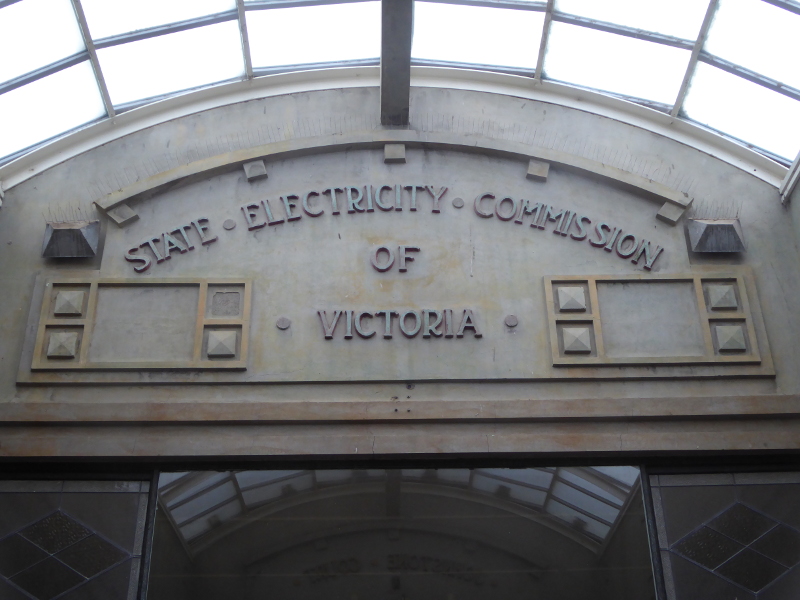 But turn around in that space, and you’ll see a little cluster of plaques and engravings, showing the builders, the architects, and the initials of Winifred Johnstone, the lady who commissioned the arcade in the first place. 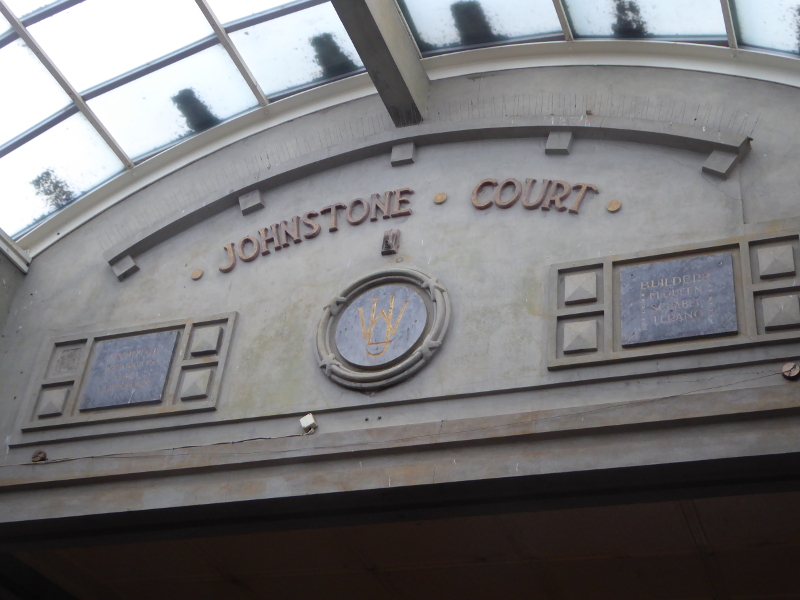 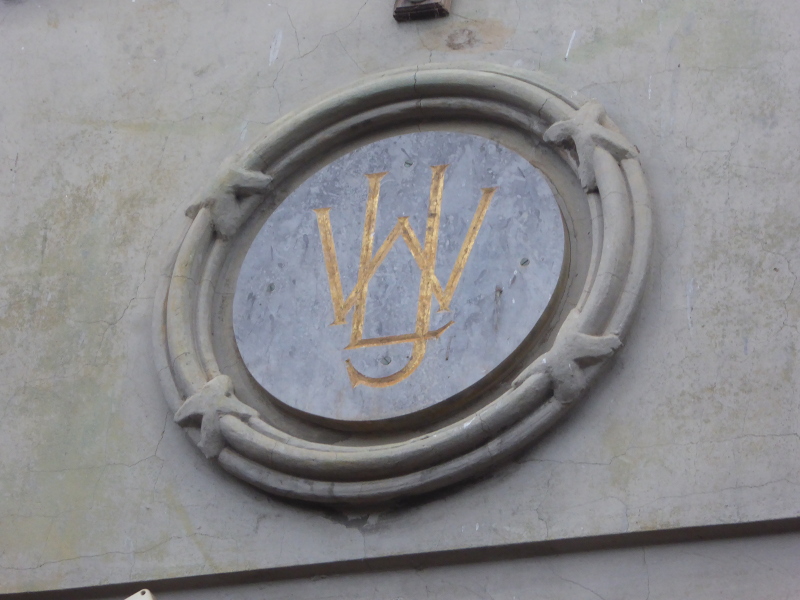 There are lots of lovely little touches, like this classic deco window, with a beautiful oval shape (shame about the bird repellent spikes). 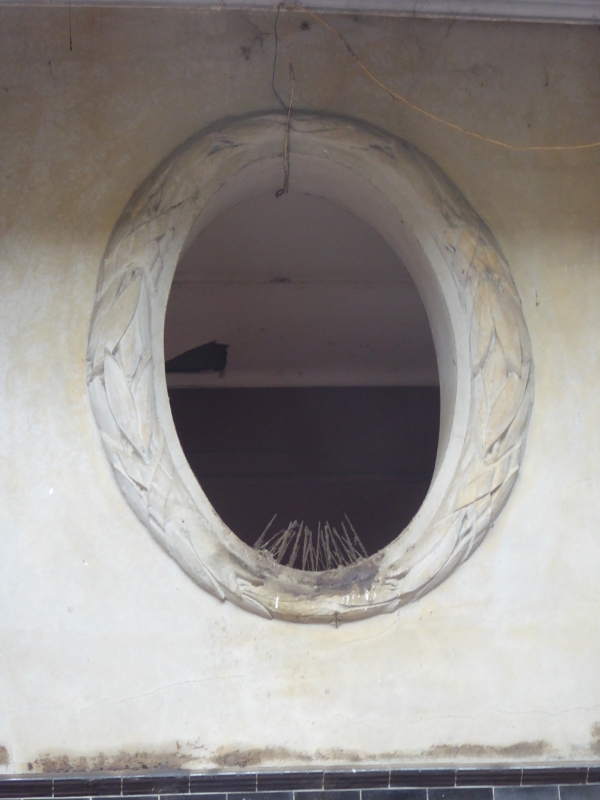 The tiling around the door frames of some premises is distinctive. 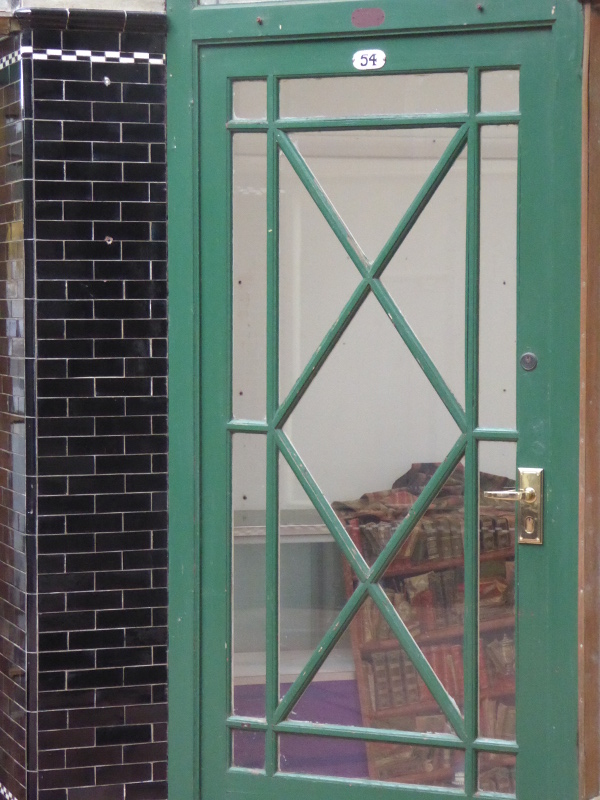 And even the doors themselves were worth a closer look, I thought, though I’m not 100% sure they were all original from the 1920s. 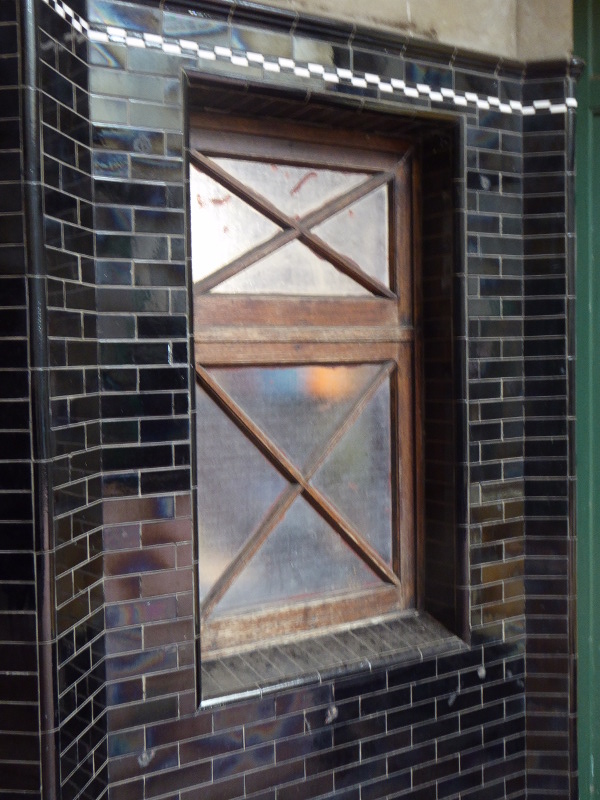 There is a lovely antique furniture shop in residence in one of the internal premises. This fireplace was part of the shop rather than being for sale! 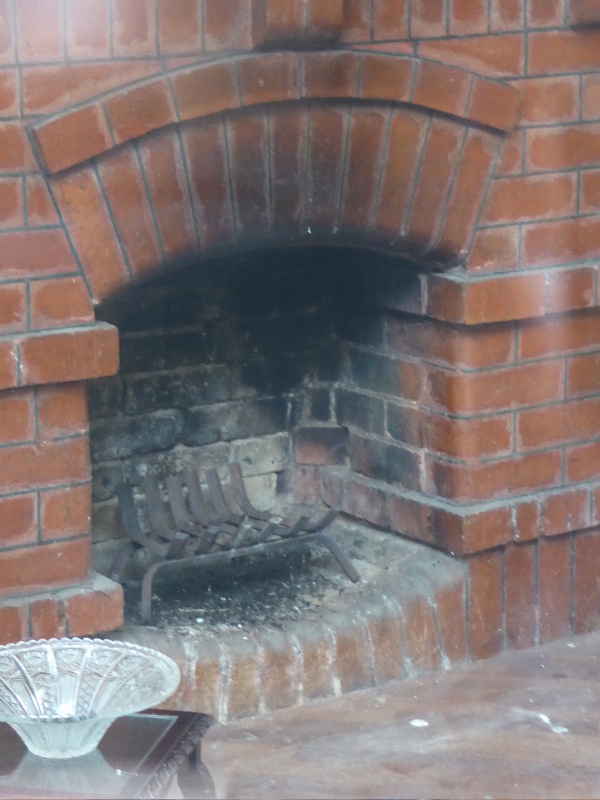 It’s just a shame that not all the shops were occupied, and what an opportunity it should be, you’d think, for an absolutely lovely art deco presence in this pretty little town. If we had a business idea, I’d certainly be thinking about going in here, and trying to make Johnstone Court a destination for both every day footfall and art deco lovers across the land.

Unlike many arcades in country Victoria, Johnstone Court seems not to lock its front doors at the weekend, so you can wander in and have a look around even on a Sunday, when all the internal shops are closed.

Nearest public toilets on the High Street up the road a little from the centre of town.

History and stories about Johnstone Court arcade in Terang

I actually want to begin the ‘history’ section with a mention of the avenue of oak trees that line the High Street in front of the arcade even today. The sign out the front refers to 1890, but I found an article on Trove from 1885, expressing concerns that the oak trees were not ‘progressing as well as had been hoped’, so it looks as if they were planted earlier than that signpost suggests. 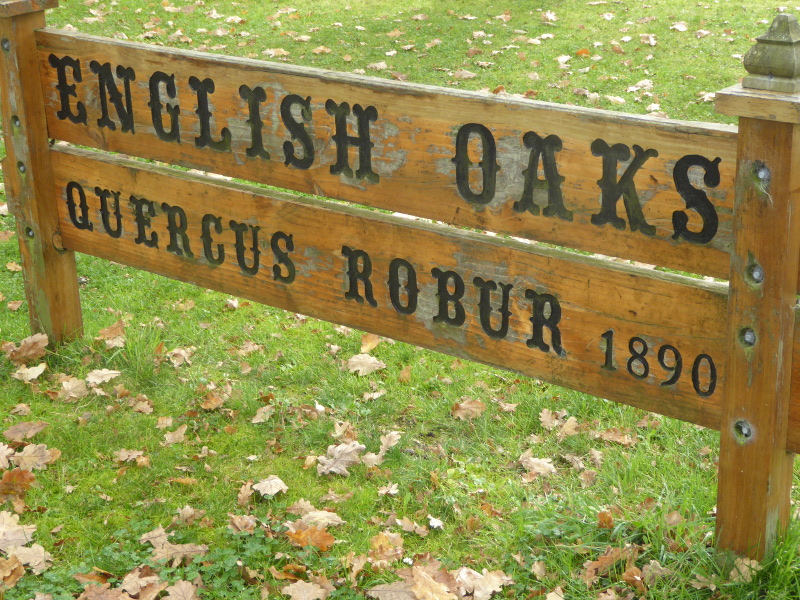 I did also find clippings from 1897 and 1898, with complaints that local goat owners were letting their beasts nibble away at the oak barks and were damaging the trees, and then no sooner had the goats been cleared off then cattle were found to be doing the same in the High Street. Terang was clearly a very rural town in those days. 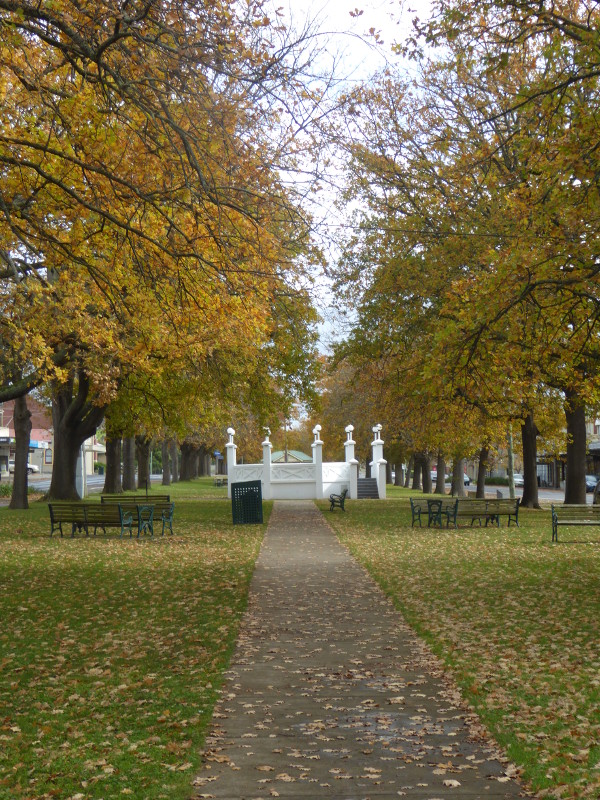 Johnstone Court was built in 1925, by Winifred Lilian Johnstone, who was the widow of a man who had made his fortune in NSW opals, according to the Victorian Heritage Database entry on this arcade.

It was described at the time as “the largest block of shops and the most up-to-date business premises in the Western District” (VHD).

The initial plans were for six shops facing on to High Street and three onto an internal court. The State Electricity Commission of Victoria was an early tenant, along with a grocer, a baker, a draper, a jeweller and an estate agent. The upper floor contained residences and workshops for the shops below (VHD website).

One of the internal shops was to be a tea room, which would become a cabaret in the evenings, with a dance hall on the central court area. It all sounded fabulous and very much of its era, the 1920s.

I loved the 1928 news article announcing the opening of an ‘elegant retreat for country women’. This was when the local Country Women’s Association opened their ‘Rest Rooms’ in Johnstone Court, apparently upstairs somewhere.

Lots of wedding receptions were held in Johnstone Court, at least through to the late 1930s and into the war years, though I didn’t find any press mentions of wedding breakfasts at Irwin’s Café in the arcade after 1942. The same café seemed to be venue for lots of organisations’ social get-togethers. I read of the local riflemen’s group and the teachers union having their annual socials in the court café over that same period in the 1930s.

So there really weren’t too many stories to be had from the Trove database, and I’d love to hear from any Terang locals who can add in some inside knowledge on how the arcade developed after the War and how it has managed to survive through to the 2020s.

Other links and writings on Johnstone Court

The Victorian Heritage Council entry on Johnstone Court is useful for background notes on the origins of this arcade. The photo leading into this entry seems to show tables from a cafe which must have been open quite recently still.

This article in a local newspaper dates from 2015, when the arcade was last up for sale.

This ABC piece from 2011 interviews a man from the local Historical Association who remembers the arcade being a bustling place – I wonder if anyone else has such memories to share with us?\

What are your stories and memories of the Johnstone Court?

Can anyone remember a time when they still held tea dances in the arcade, or even remember talk of wedding receptions in the cafe that used to operate out of Johnstone Court?

Does anyone have a favourite shop that is or was once housed in Johnstone Court, on the High Street or in the inner court?

Do you have any other stories linked to the arcade to help fill in the gaps, since the Trove database doesn’t tell us much after the end of the second world war?