Wodonga Racecourse has witnessed bushfires, hurricanes and army occupation during WW2, as well as drama on the track itself. The vintage grandstand has a few stories to tell, too.

I came to Wodonga racecourse really just for the vintage grandstand, and I was delighted to see the structure in place in 2021 looking remarkably like the one pictured in a local newspaper just after it reopened after renovations in December 1947. 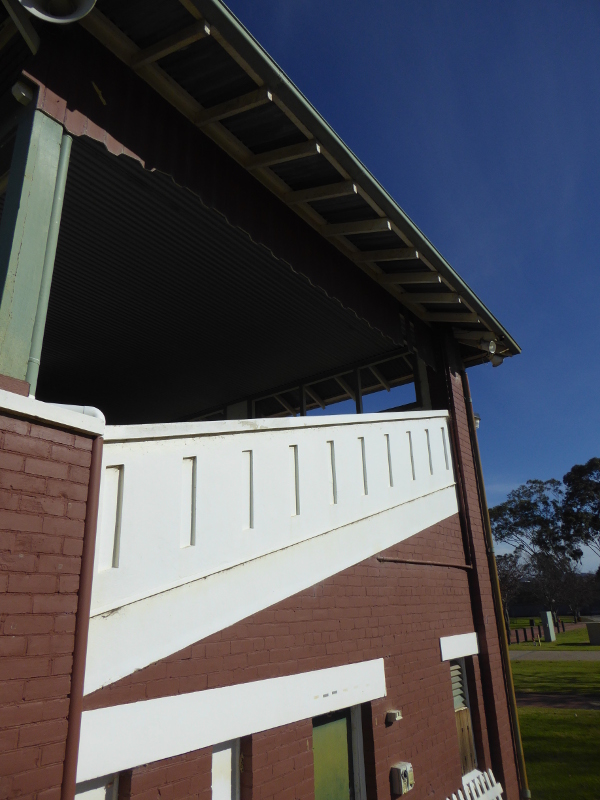 It’s not obvious from my research on the Trove website, or from any signage on the course today when the Wodonga racecourse grandstand was actually built – it may well be the basic structure that went up in 1907, but I have no proof of that, so would love to hear from anyone who can confirm or otherwise. Another rebuild in 1925 may well also have left the grandstand looking pretty much as it does today, too. 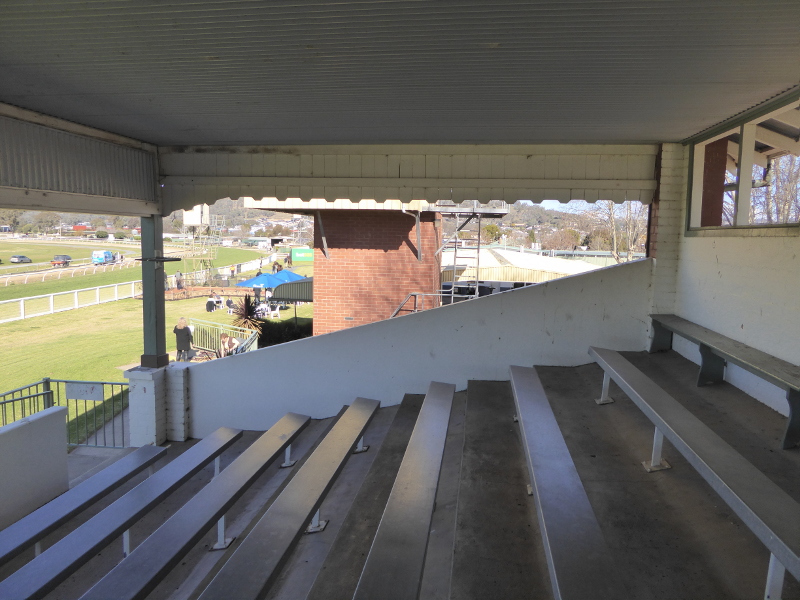 The one I sat in for most races must seat about 750, though only one big family plus a few oddball loners like me were there for this race day. It may well be the grandstand built around 1910, though there is no signage, and the descriptions in the newspapers when that grandstand opened did not go into enough details for me to compare. 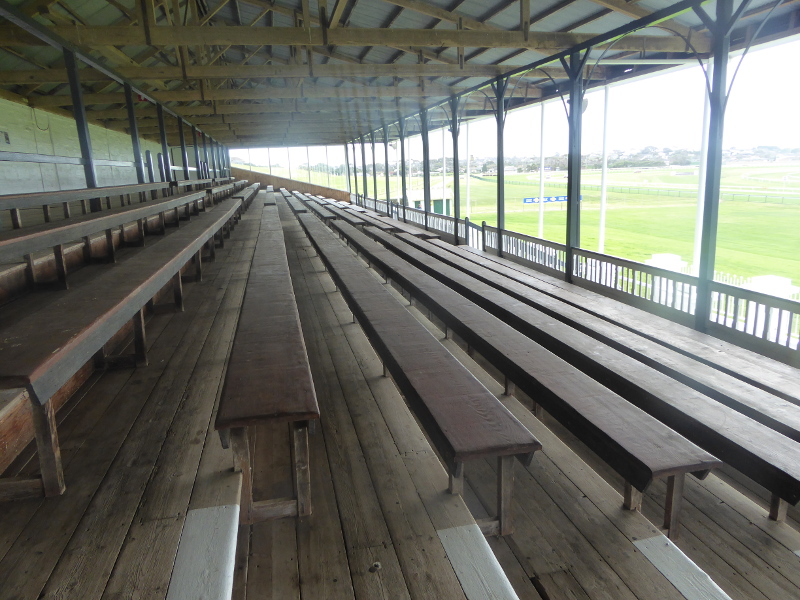 I overheard many racegoers saying what a perfect day it was for racing: bright sunshine and relatively warm for winter after a pretty cold, damp spell, so the mood was positive, though it did get a bit more sombre later on as a jockey fell in the 3rd race, and was down being looked after on the track for so long that I had to leave to make my way home, so I’m not even sure how badly he was injured. 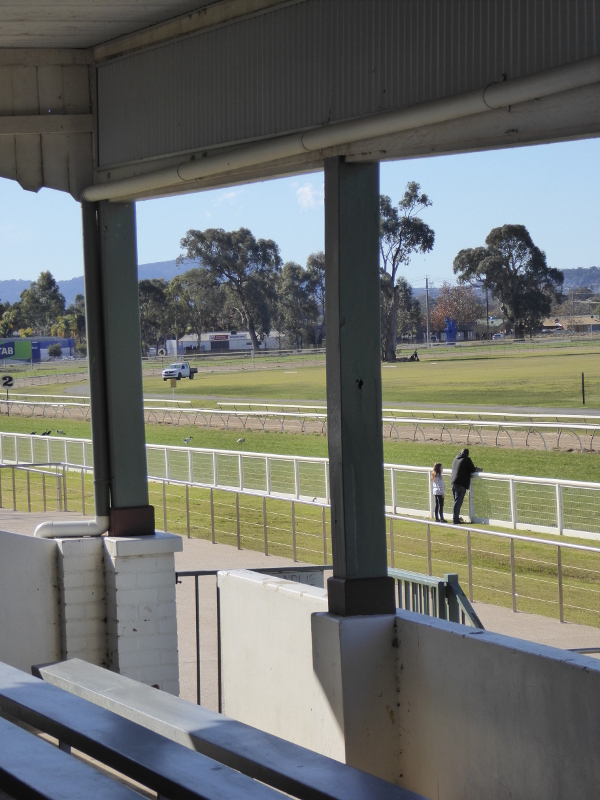 Nearly all the facilities at Wodonga have been modernised since the racecourse’s vintage days, so really all there was for Vintage Victoria was that grandstand. 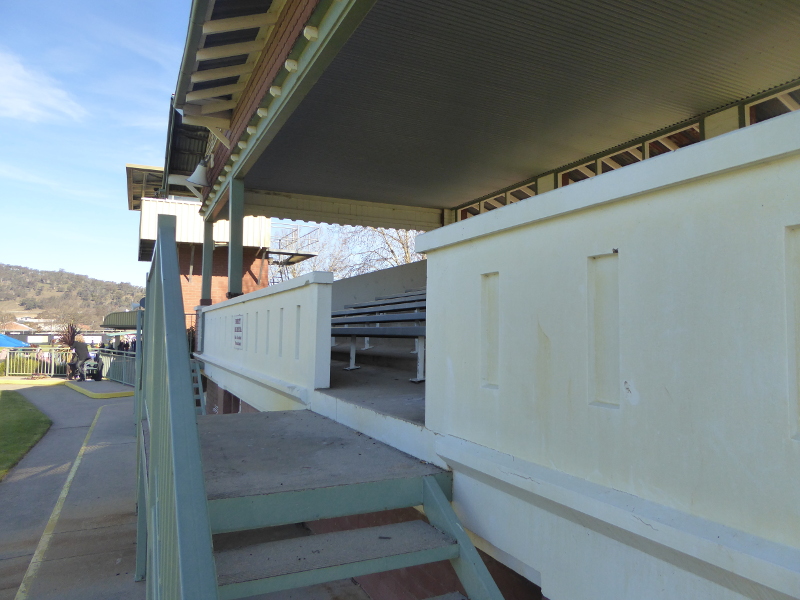 It has quite a simple design, with three staircases leading up to a seating area with 8 rows of simple benches (the benches are metallic but not as vintage as the ones I sat on recently at Warrnambool or Terang). 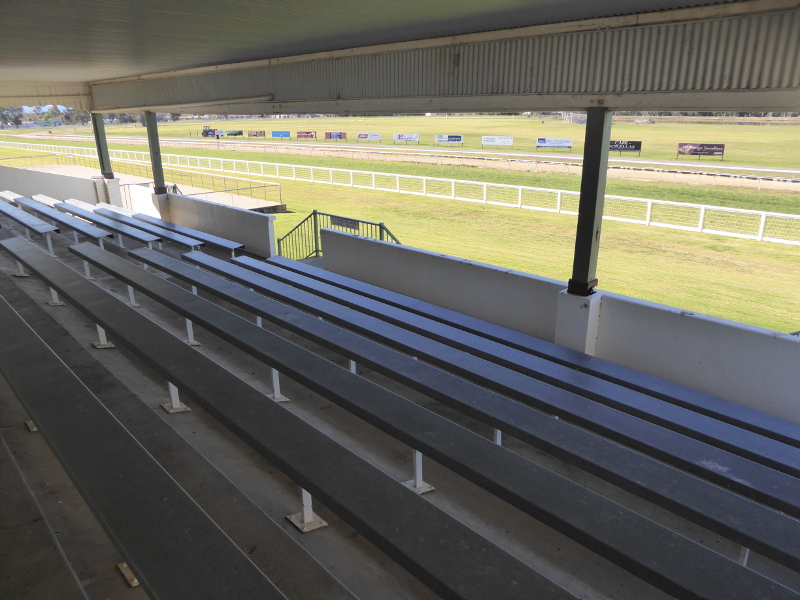 The window panes are all missing at the back of the grandstand. This may well be intentional to allow for good ventilation on hot days, or they may simply never have been replaced after the hurricane that blew through the area in the 1920s. 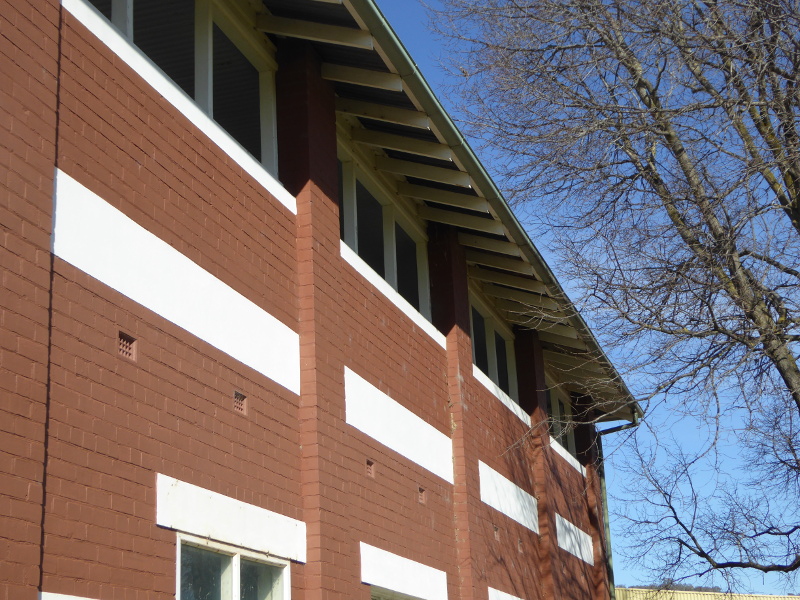 The grandstand gives great views over the wide expanse of the race track itself, and the hills rising above Wodonga in the distance. 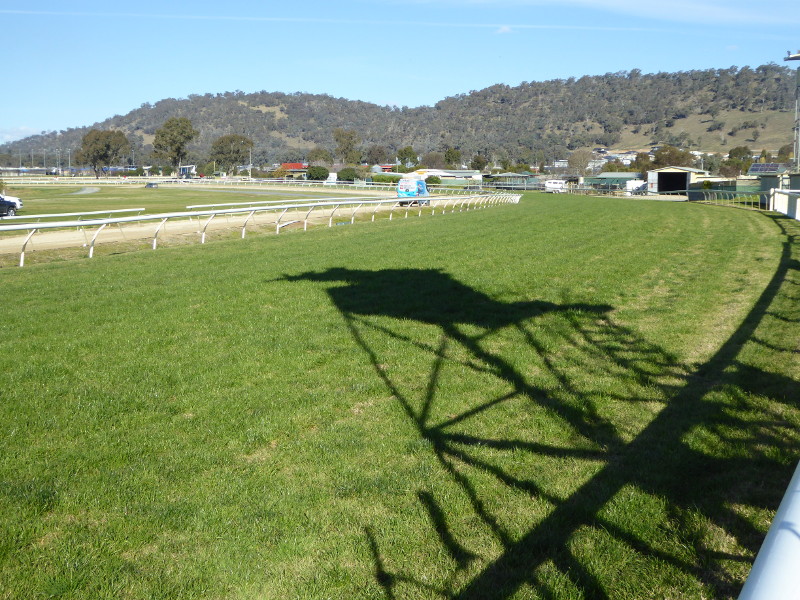 It was fairly well-used on the day during the running of each race, though not full by any means, with attendances probably down due to restrictions on movements from across the NSW border due to Covid. 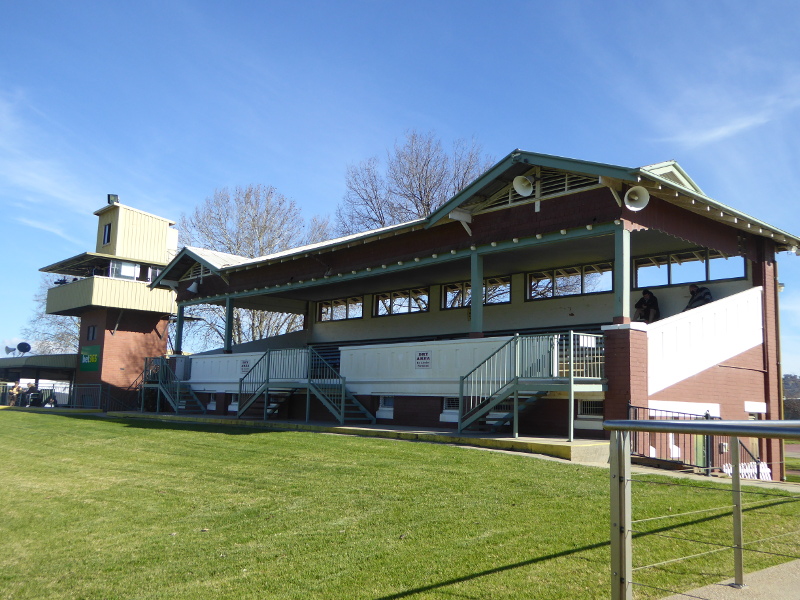 Two blokes sat in one corner on their laptops for the whole time I was at the track – I don’t think they moved once, so for them it clearly served its purpose.

Quite a few of the horse handlers also watched the races from the back row of benches, one group gleefully skipped down the steps after – I assume – watching their horse come home first.

The sun made it difficult to take a decent photo of the front of the grandstand. 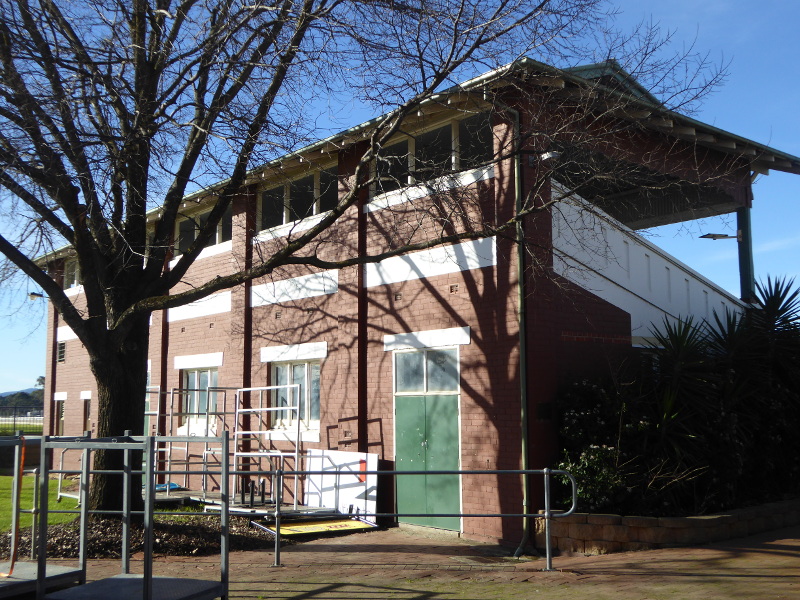 But actually, the rear of the Wodonga racecourse grandstand is almost as attractive as the front, with its sturdy brick, and nice wooden window frames.

And the big gum tree just to the side set the structure off nicely, too.

Nothing much more to say on this grandstand, or on the course as a whole.

I found no old photos of past champions, no plaques to remember stars of old. Even the finishing post had a modern look to it.

So, considering all the numerous modifications made to Wodonga racecourse over the decades, we are probably lucky the vintage grandstand still exists at all, and is still being used by spectators today.

There was a nice, relaxed feel to Wodonga racecourse, without the glamour of a big cup day, and no big entertainments as we probably might have seen in pre-Covid times. But I liked the place, and for once, I came out on top in my trifling bets, so that always makes for a positive outcome. 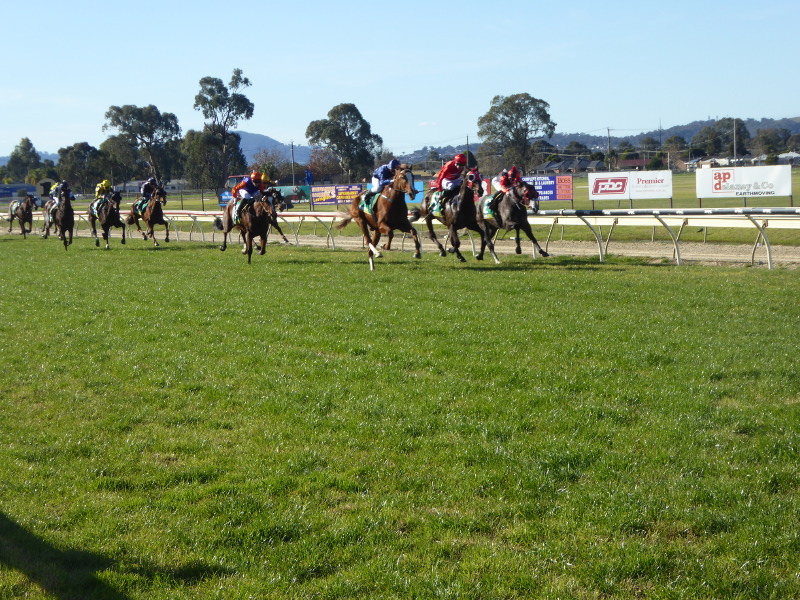 I just hope that injured jockey came through OK. His riderless mount is somewhere in the pack in this photo at the finish, though I didn’t see him gallop past.

History and stories from Wodonga racecourse

I’m not sure when racing began on the current site, but in 1872, an article in the local newspaper covering Albury and Wodonga complained at the lack of shelter from the elements that a grandstand would afford. But their comments on other improvements needed give a hint of how racing was conducted in those early days. The newspaper understood if fencing the track was beyond the means of the turf club, but argued that even a rope would help keep spectators from bunching in close to the passing horses (sounds more like the Tour de France in 2021).

By 1874, the first grandstand at Wodonga was being built (a falling piece of timber narrowly missed a worker on the site). By 1879, when Wodonga races were an annual event, on Boxing Day, the grandstand was almost filled to capacity, the newspaper noting ‘a larger proportion of the softer sex’.

When the first winter meeting was held in 1891, the rival club over the river in Albury also decided to hold a meet the same day, so many assumed that the Wodonga racecourse would be hard-hit. In the end there were more entries at Wodonga than Albury.

In 1894 the winter meeting had to be held over two days because at the end of one race it had become so dark that the judges couldn’t tell which horse had won; the jockey who reckoned he’d won was understandably upset!

“Disgusting epithets” were shouted by a drunk who was arrested right in front of the grandstand in 1897, within the hearing of ‘ladies in the stand’. Police cars were in short supply in those days, so the police had to take a cab to the local lock-up; the man’s fine included the cost of the cab.

A ‘Hibernian’ sports day was held regularly at the racecourse in the early years of the 20th century. These included tugs-of-war between workers of the NSW and Victoria railways, a bicycle race, and wood-chopping. I’m not sure how those events make it ‘Hibernian’, but if anyone has an idea, do let us know.

The Wodonga and Towong Sentinel newspaper argued strongly in 1906 that a grandstand was needed, and that trees should be planted to fill the ‘wilderness’ that was the reserve on which racing was run until then.

A new grandstand was built in 1907 after the previous one had stood for some 50 years. By 1909 there was an avenue from entrance gate to grandstand.

Boxing Day 1909 led to a court case over an allegation of ‘welshing’ by a bookmaker, who refused to pay out on a winning ticket, on the basis that the stewards were holding an inquiry into the race. He basically told the punter to come back the next day, but the man who had won his bet took the case to the police. In court it turned out the bookmaker had only £4 in his takings and the win involved a payment of £16. The outcome was the refunding of the punter’s stake, which ended up being donated to the Albury Hospital.

An enormous row broke out in 1911 over the siting of a tea room on the racecourse. Should it be primarily for the ladies attending races? Did they want to be mixing with the hoi polloi near the paddock? Should the tea room be part of the grandstand? Might it block good views of the races?

Bushfires came close to Wodonga racecourse in January 1914. And a hurricane blew through Wodonga in 1923, damaging parts of the grandstand, and blowing roofs off horse stalls.

There were more masks being worn in Wodonga during the Spanish flu epidemic of 1919 than were in evidence at the racecourse in 2021. Things were worse for the town in 1919, though, with several local cases, and a temporary tent hospital set up at the racecourse. One returned soldier, who had survived the horrors of World War 1, died of the flu at the racecourse in February 1919. The poor man had just got married, and caught the flu on his honeymoon in Melbourne.

19-year-old jockey Jack O’Meally was crushed by his mount and died at the racecourse in July 1924.

1925 saw a rebuild of the grandstand, which may well have been more severely damaged by the hurricane two years earlier than initially thought. So it is quite possible that the structure there in 2021 was built during this renovation.

There was a 5 year gap in racing at Wodonga between 1942 and 1947, the grandstand needing repairs to broken windows before spectators could return. Much of that time the racecourse was occupied by the army.

What are your experiences and stories from a day at Wodonga Races?

Anybody got nice memories of days out at Wodonga races?

Does anyone know when Wodonga’s vintage grandstand dates from?

Any other stories from your own days out at Wodonga Races, just leave them in the box below and we can add them to the post.

Other links and writings on Wodonga racecourse