The magnificent iron gates at the entrance to Williamstown Botanic Gardens were forged in Glasgow and shipped over some years after the Gardens opened in 1860. Still standing proud today.

Williamstown Botanic Gardens are relatively small. In fact we had been to Williamstown several times for pier reviews in the past, not to mention the Timeball Tower, and hadn’t even realised there were botanic gardens in Williamstown. 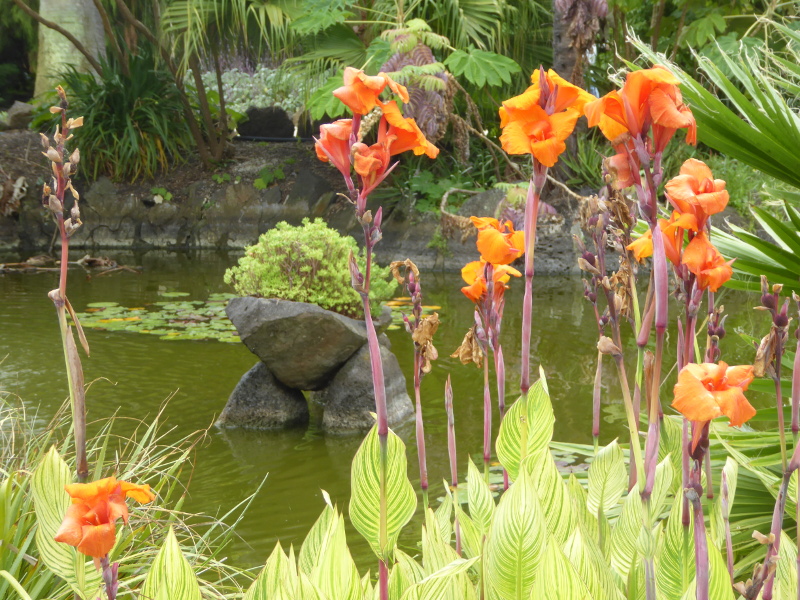 This is the Williamstown Beach part of the area, with some stunning residential properties lining the streets near the gardens, and a rather lovely sports scene in action as we arrived on a late summer’s morning. Two cricket pitches sit side by side right by the gardens, and you can spy on the games via a break in the wooden fencing that divides the botanic gardens from the boundary ropes. 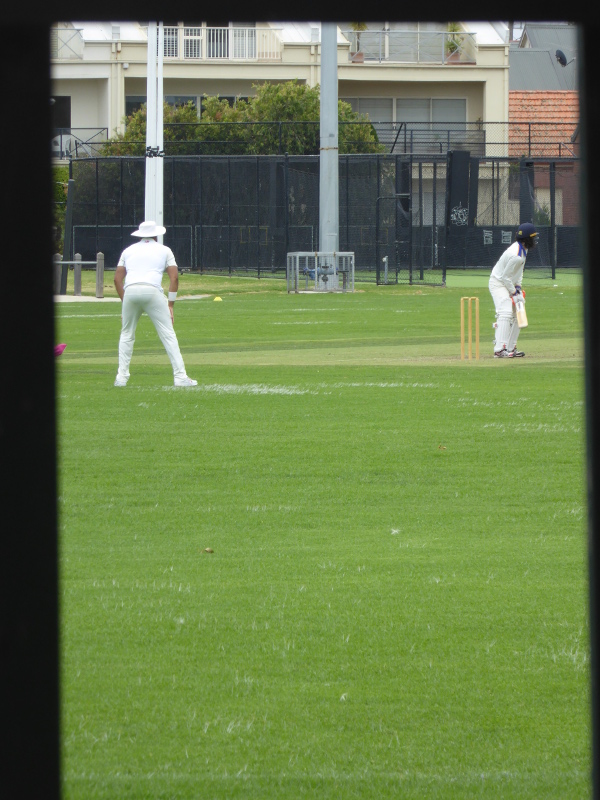 It was nice to see so many groups sitting in the gardens using the grassy areas for picnics, much as people have been doing for most of 160 or so years they have been here. I don’t quite see how 3 or 4 thousand people would have fitted in here during the peak years of garden usage, but there must have been at least 50 or so in there as we wandered through. 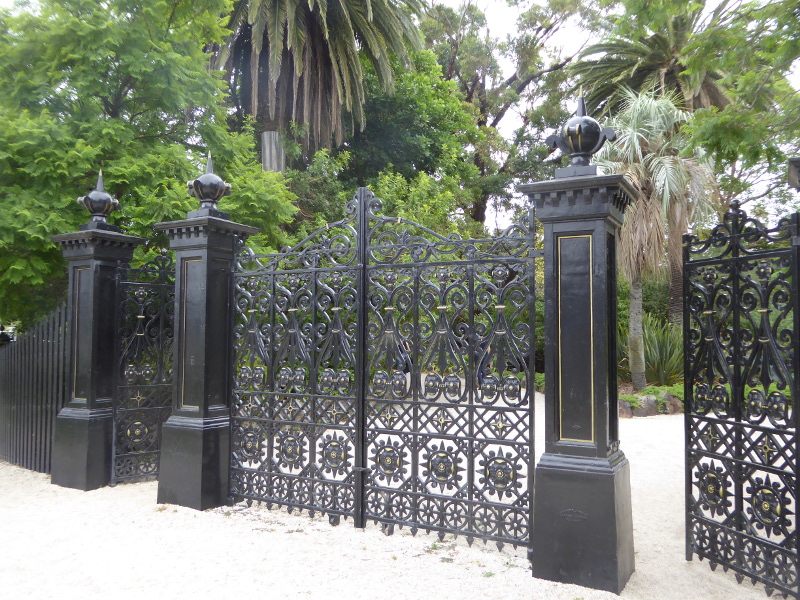 We approached via the cricket pitches actually, so these stunning iron gates, which probably mark the original entrance to the gardens, are right over on the other side of the area. 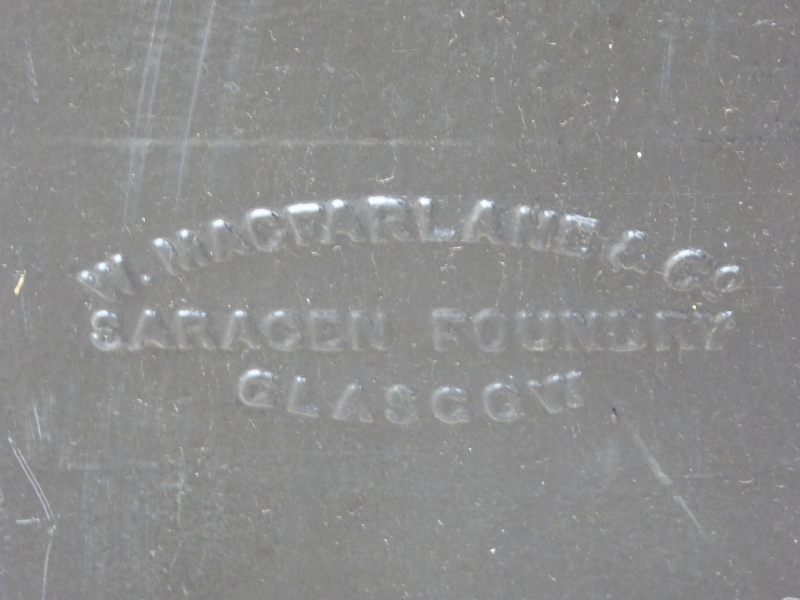 I loved the fact that they were forged in Glasgow by MacFarlane’s Saracen Foundry, which produced similar iron work for botanic gardens and other structures across the then Empire from the 1860s until the foundry closed in 1965. If I was active in Williamstown, I’d be looking to link up more formally with Glasgow Botanic Gardens and Bangalore Botanic Gardens in India, both of which have beautiful examples of MacFarlane’s work, as do the botanic gardens in Halifax, Nova Scotia. 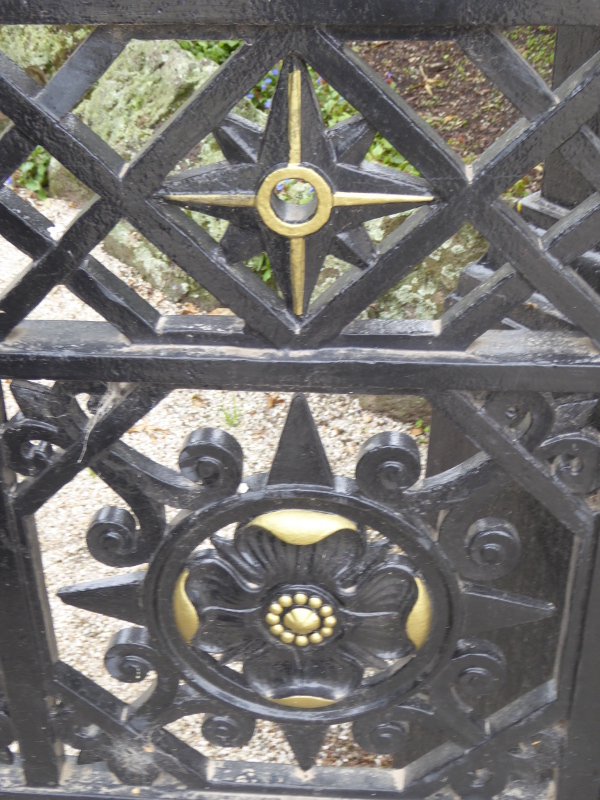 I was glad I had done the historical research before visiting these gardens. It meant we went looking for which might by the gum tree planted by George Arthurs in 1882 (see stories below): only a couple of eucalypts looked old enough; I wonder if anyone locally knows whether either of these might be the Arthurs gum? 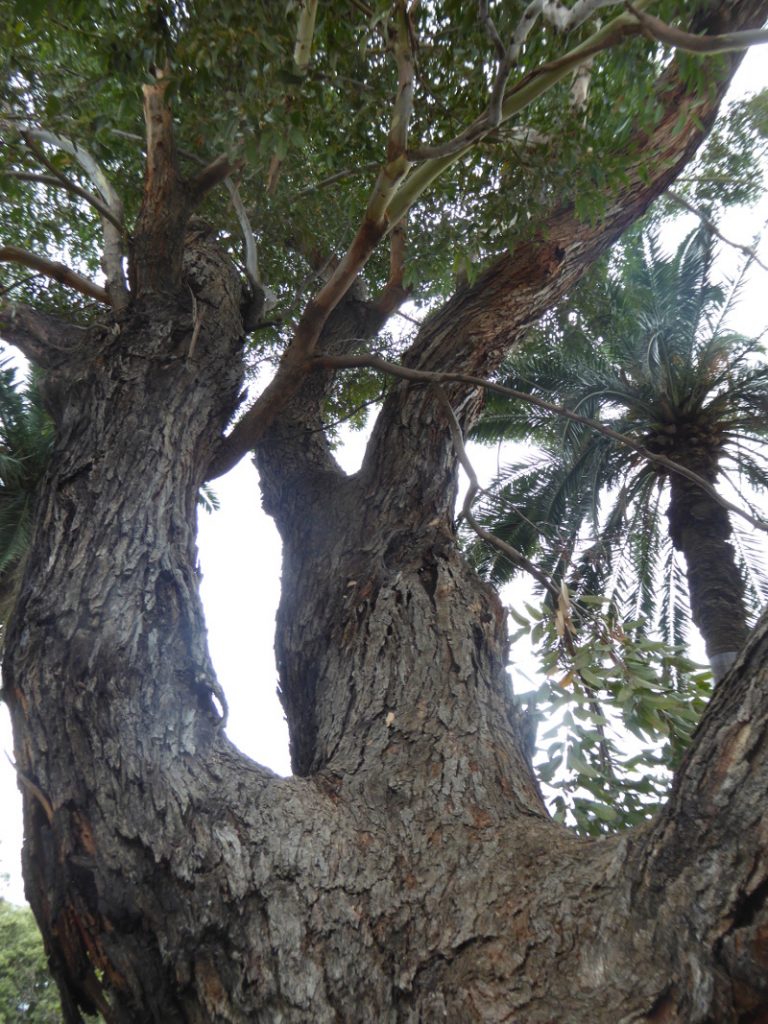 The lily pond Is still there (from the 1918 description below), though the bridge seems to have gone now, and the bougainvilleas, while still there 100 years on, were past their best in late February. 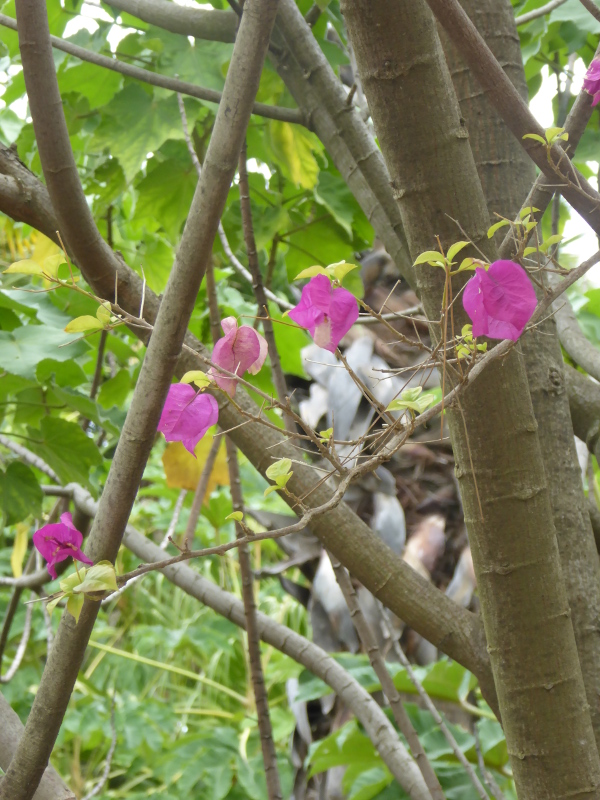 The 1906/7 water fountain was proving so popular with the kids that it took a while to find a quiet moment to photograph it. 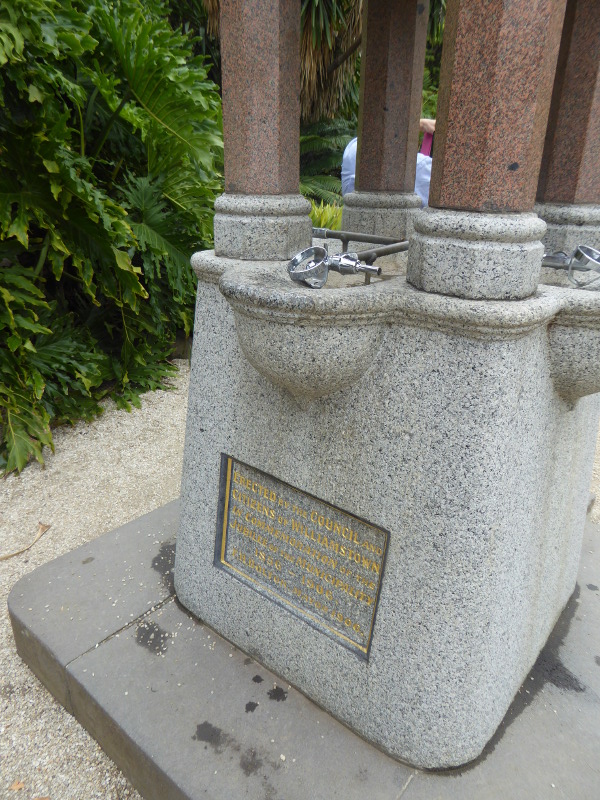 And the statue dedicated to A T Clark is still there (erected in 1891). He has a fine beard, but we find out little about him other than that he served as a local councillor. 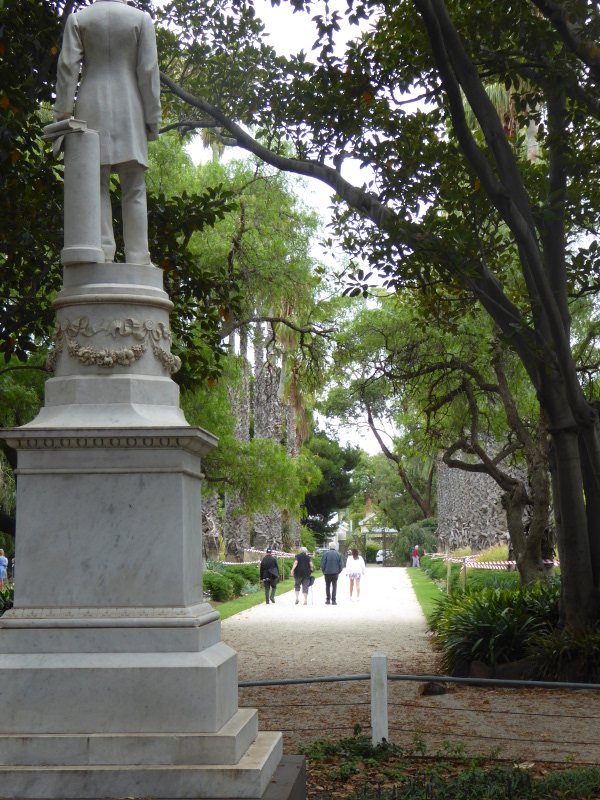 Other than that, there isn’t too much vintage stuff in Williamstown Botanic Gardens. This entrance sign looks as if it’s been there a few years. 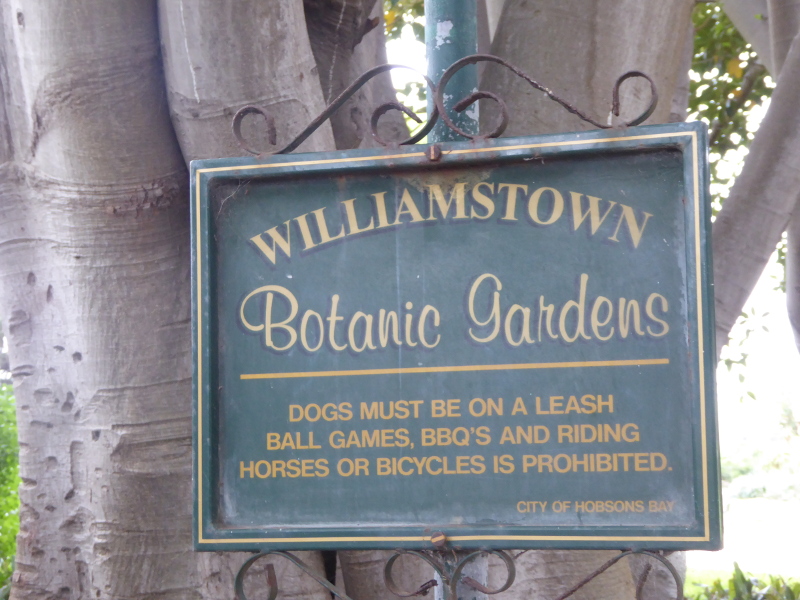 And some of the trees look pretty vintage, like this monkey puzzle tree.

But it is just a really pleasant spot to roam around, to picnic in or just to sit and read by the gently sprinkling fountain or the flower beds. 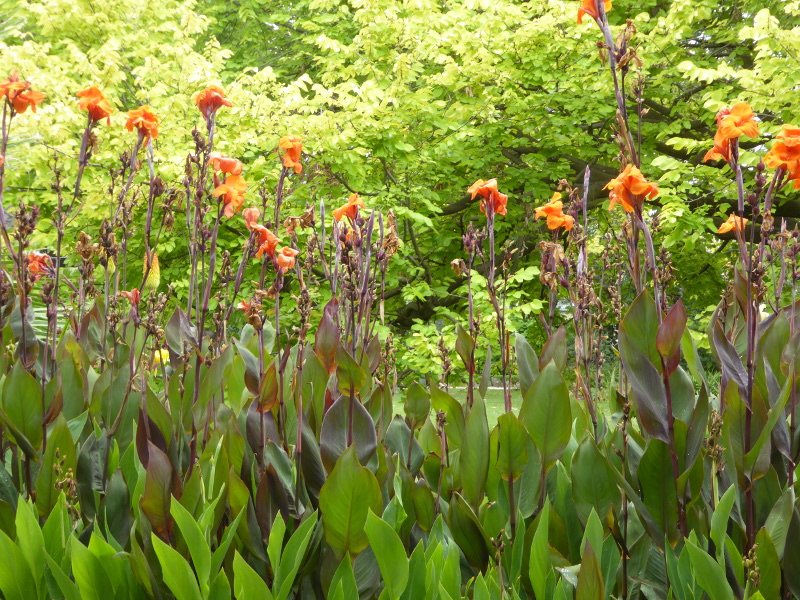 And then drop down to the beach for a paddle, or follow our route and take the road along the coast back to the Timeball Tower, which one kind Vintage Victoria reader had tipped me off was now working again. 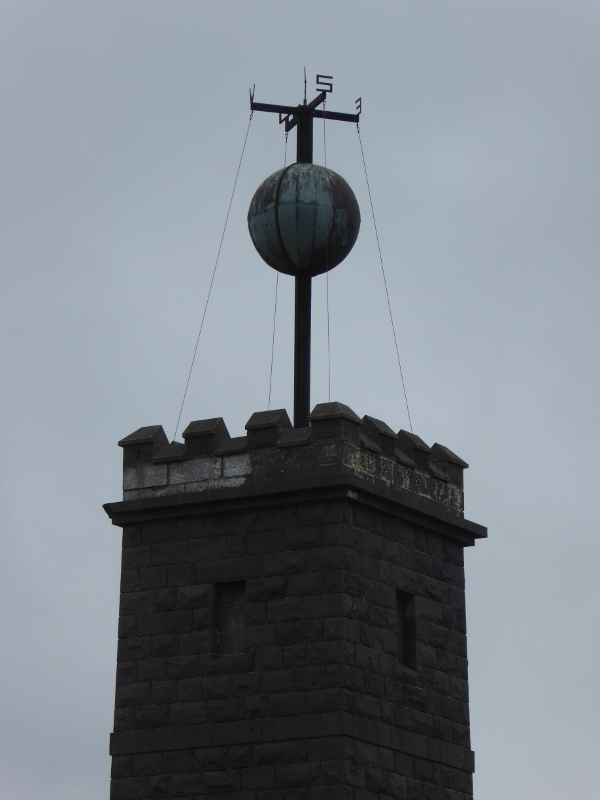 We timed our arrival to perfection, just as the ball was raised into position at about 12.55pm, before being lowered at precisely 1pm, not with a resounding thump as I had somehow imagined, but with a slow steady drop on its pullies. I guess the ship navigators watched quietly with the telescope rather than waiting to be alerted by the noise of the timeball falling? 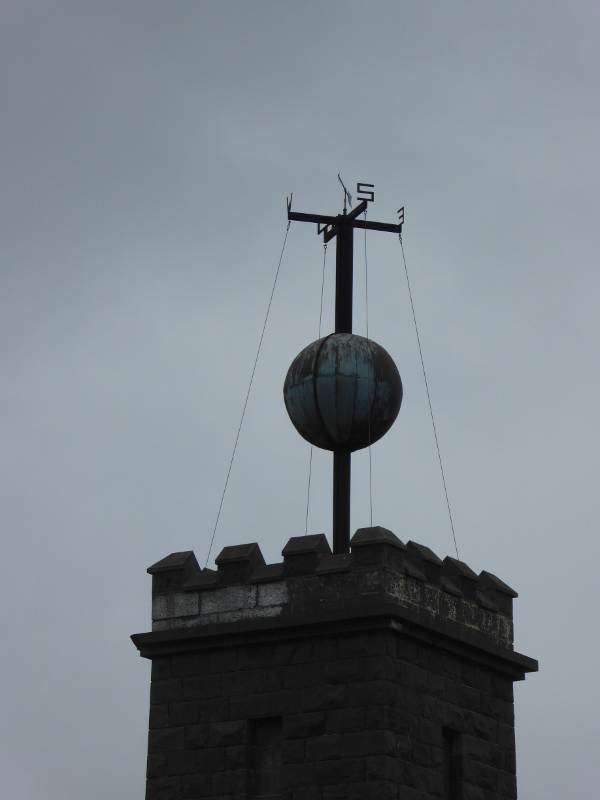 Still, it all rounded off a lovely morning visit to Williamstown, which has now provided gardens, lighthouse and piers for Vintage Victoria…

As far as I could see, access to the Williamstown Botanic Gardens is possible at all times.

There are probably fewer benches than we had seen in other botanic gardens – most people seemed happy to sprawl out on the ample lawns, though it was dry so that’s less attractive on a damp day.

There are toilets on the Esplanade, at the beach end of the gardens..

The first article mentioning them dates from December 1862, advertising a new year’s day fete to raise funds for the Mechanics Institute, with fireworks, ‘Caledonian’ Games, archery and something called ‘Monster Galvanic Batteries’, which sounds more like Mary Shelley’s Frankenstein than anything contemporary. And a new ‘French’ game called ‘Tourniquet’ was to be on offer, though I have no idea what that involved…

28 December 1868, The Age described Williamstown on one of these fete days in the Botanical Gardens. All shops shut, except for those providing refreshments to visitors, buildings and all the boats at the piers would be garlanded with flags and evergreens. 2,000 people entered the gardens and were entertained by acrobats on bars, a band of ‘negro minstrels’ (I wonder where they came from, reminding me of the black choir from Durham NC we used to love watching). There were the usual races, and dances in the evening, as well as Chinese lanterns and a game called kiss-in-the-ring (no idea what that involved).

The Eight Hours Day movement had quite a presence in Victoria in the 1870s, and achieved big success with the introduction of the basic 8-hour working day. In 1873, to celebrate a year of the new rules, a big picnic was held at the Williamstown Botanical Gardens, to which reports said 3,000 people came along.

There were no real dramas in the early years of the Williamstown Botanical Gardens, unless you count the complaints of poor handicapping at the races during one of the picnics or the poor design of hurdles at the same event. There were a few young cypress trees stolen from the Gardens in 1870; a 4ft long snake was seen in the Gardens in January 1883, by some young runners. 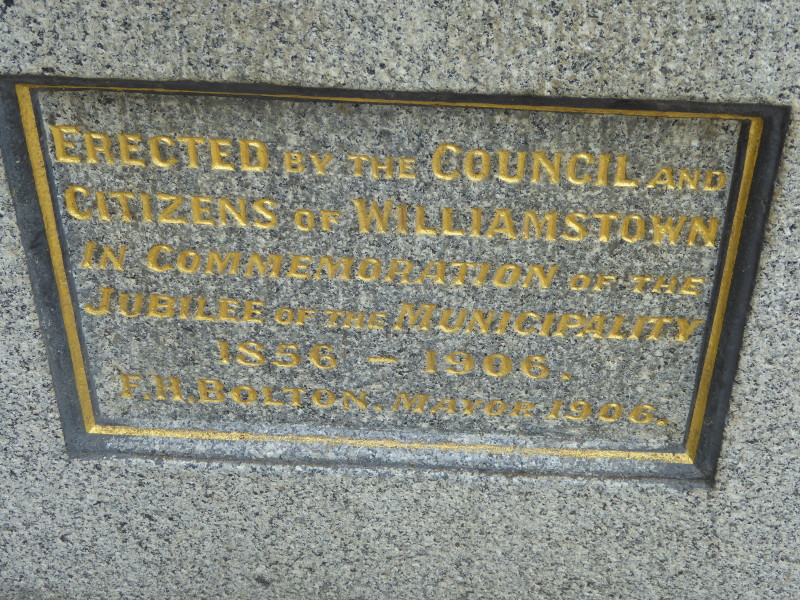 The 1907 fountain commemorated the 50 years Jubilee of the town; similar to the one that used to be corner of Collins and Elizabeth Streets, apparently – anyone remember that?

Also in 1907 the curator of the Gardens made a formal complaint to the Council about the goats wandering freely around the gardens eating various plants and gnawing away at many of the tree barks. The Council passed a motion that the goats should all be shot!

A more human (or humane) story a year later concerned the shock three young children had one Saturday afternoon, when they witnessed a middle-aged, well-dressed woman suddenly fall off a bench after suffering what sounded like a stroke. The problem was that she carried no ID, and nobody came forward at first to identify her or declare her missing. In the end her Mum made the connection after reading of the incident and worrying that her daughter had not returned home for a few days.

December 1909 saw a devastating fire in Williamstown with some 25 houses along three streets burnt down. The Police Band held a concert in the Botanic Gardens to raise funds for the families affected.

A December 1918 description of the Gardens spoke of: “Imposing iron gates at the corner of Gifford and Osborne streets.” A rustic bridge over a water lily lake, where lots of goldfish swam, and garlands of bougainvilleas.

The Mayor and Mayoress of Williamstown held picnics and garden parties in the Botanical Gardens for many years, with up to 4000 people attending. These appear to have been held right up to 1939, and maybe later.

In 1932, a man called George Arthurs died at the age of 94, after spending 71 years in Williamstown. In the notice of his death in The Herald newspaper, it was recalled that he had planted a gum tree in the Botanic Gardens 50 years earlier, i.e. in 1882. I wonder if it survives to this day?

What are your experiences at Williamstown Botanic Gardens?

Does anyone know the Mayor’s picnic or garden parties stopped being held in the botanic gardens? Is anyone still around who attended one in their youth?

Can anyone shed any light on ‘Arthurs Gum’? Is it still alive in the botanic gardens?

Or does anyone just have a good memory about a visit to Williamstown Botanic Gardens that they’d like to share here, even from the last few months or years?

Other links and writings on the Williamstown Botanic Gardens

Tot Hot or Not blog enjoyed their time here, too. (Headline not quite accurate, though)

The Friends of Williamstown Botanic Gardens have their own web page.

Melbourne Playgrounds has an entry on the Gardens.

And for a video tour of the gardens go to Melbourne Site Hunters’ page on YouTube.