The remains of the original Werribee Jetty, built in 1897, still stand on the other side of the Werribee River from today’s Jetty – a peaceful spot with lots of birdlife and lots of fishing.

Werribee Jetty is not a pier in the promenading sense of St Kilda Pier or the one at Frankston. It is very much a working structure with fishing seemingly the key to its survival into the 21st century. 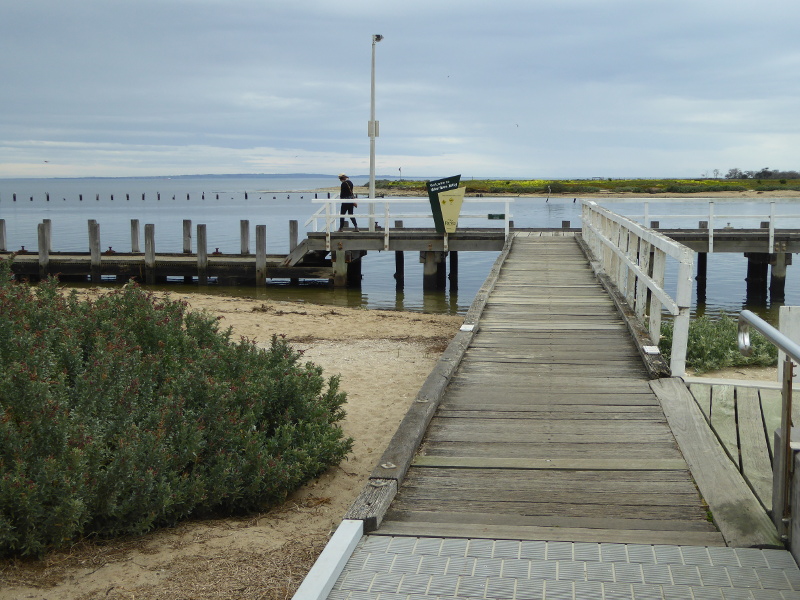 But it qualifies for an entry under Piers of Victoria as it does have an old boardwalk and is most definitely still in use, although very quiet the day we turned up to have a look. 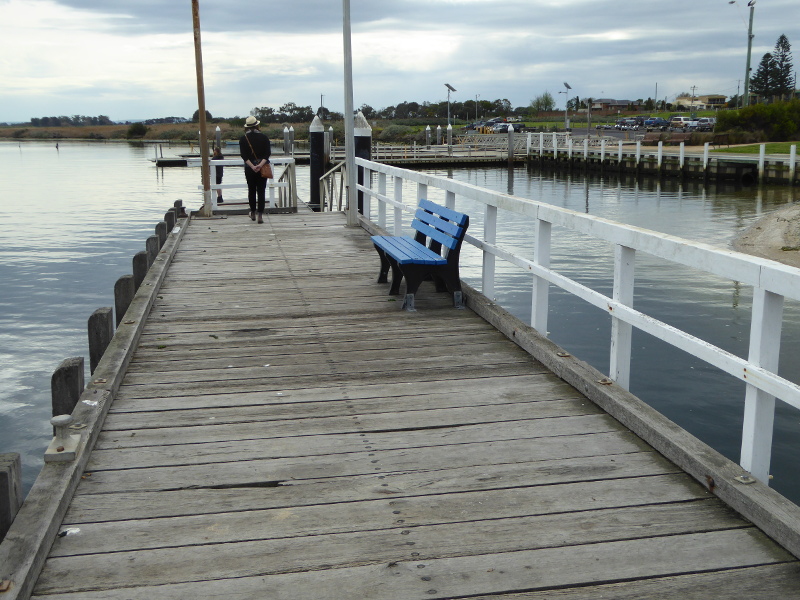 Werribee Jetty is also unusual in being more of a T-shaped structure than the usual long fingered piers stretching out into the sea. In fact, it must be one of the only jetties in Victoria where the boardwalk running parallel to the shore is actually longer than the section heading out over the water. 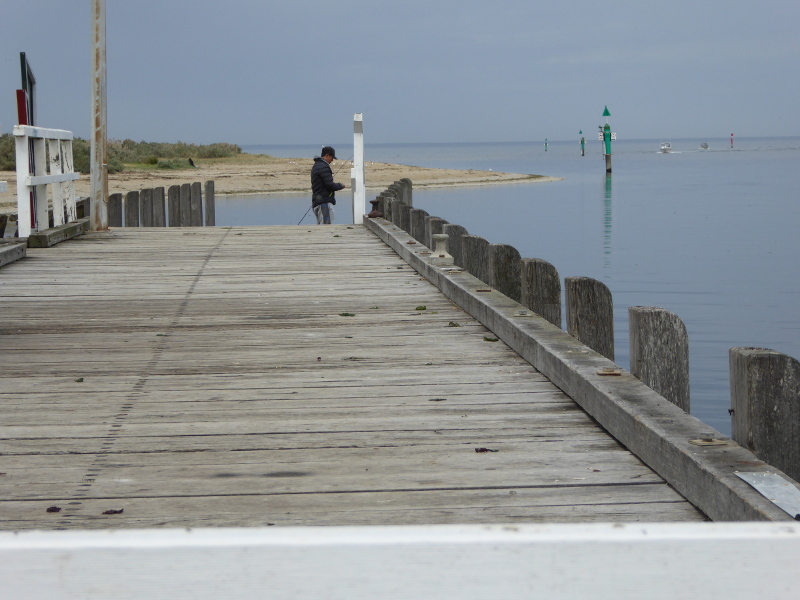 There was a solitary fisherman at each end of the T, but otherwise we were alone on Werribee Jetty this quiet Sunday in early spring, with no wind blowing and the air totally still. 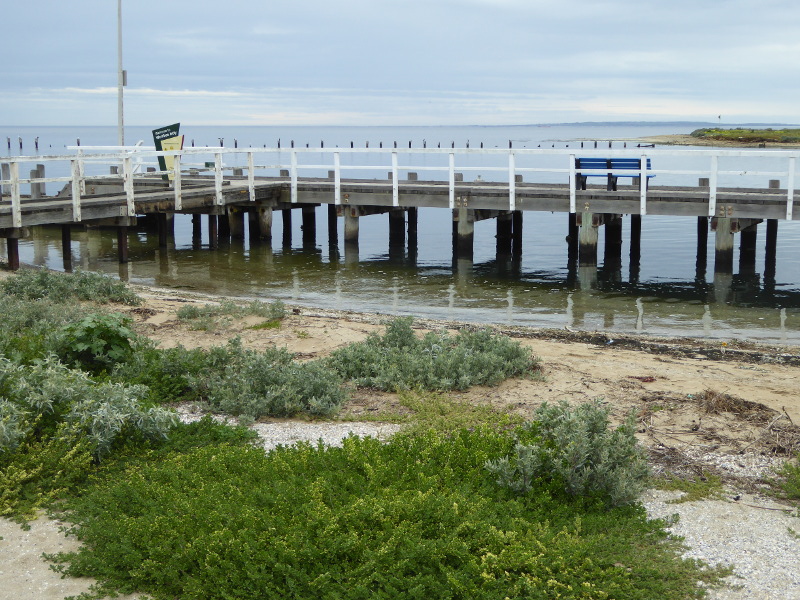 It’s the kind of situation where you realise just how quiet an activity fishing is, when the only sound was the distant screeching of kids in the playground a few hundred metres away. A couple of dog walkers sauntered along, but the peace and tranquillity even kept the canines quiet. 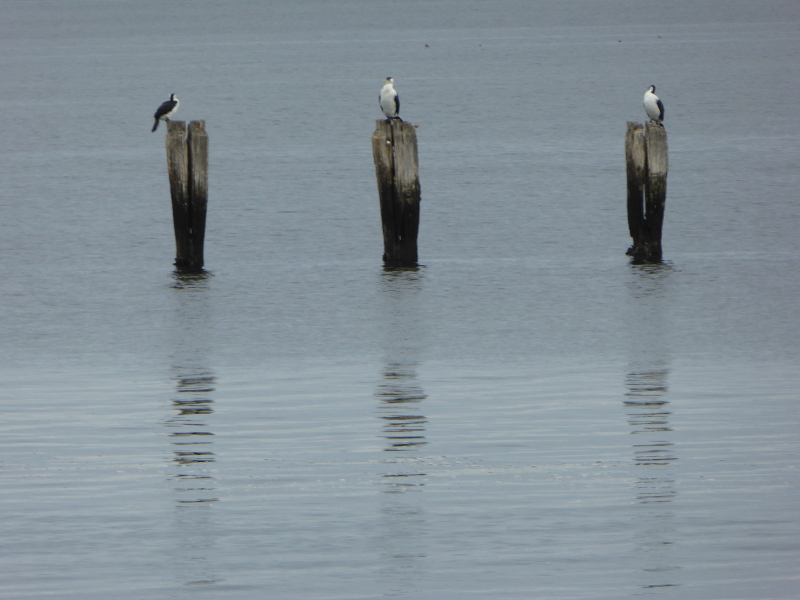 It’s also the kind of place where you want to just gaze out and watch the birds swooping by: there were swallows diving under the pier itself; lots of sea birds preening themselves on the piles opposite, and a little cluster of pelicans grooming each other over the water on the wasteland area across the way. 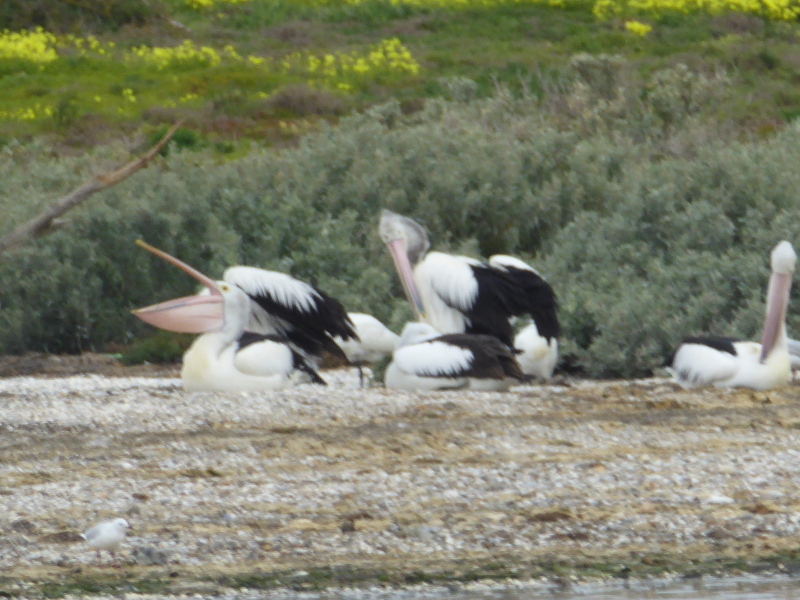 Those old piles must once upon a time have been the base of another pier down here at Werribee, though it’s hard to work out where people would have gone when they disembarked from their boats or ferries as the low-lying area of land opposite doesn’t really look as if it has any pathways or leads anywhere. 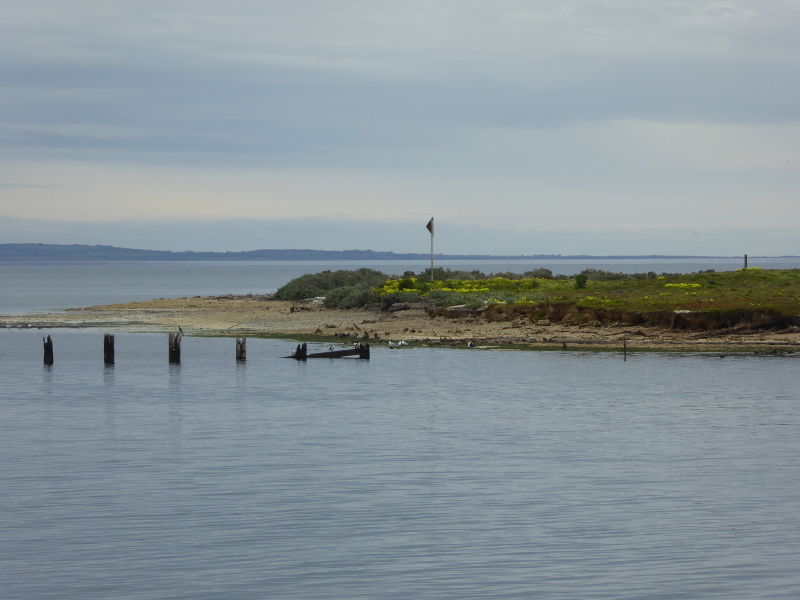 In fact, we managed the whole trip without realising that just out of sight over the other side of the river is an absolutely enormous sewage treatment plant. I only discovered that on starting my research after we got home, and I was staggered at the immensity of the site on Google Maps. There was no malodorous hint of its presence on the day we were in Werribee so it’s clearly doing a reasonable job in cleaning the water as it passes through the various ponds.

The enormity of the water treatment plant is also the reason this area is such a sanctuary for bird life, and I’m sure we only got a small sample of the species hanging out round here on our visit. 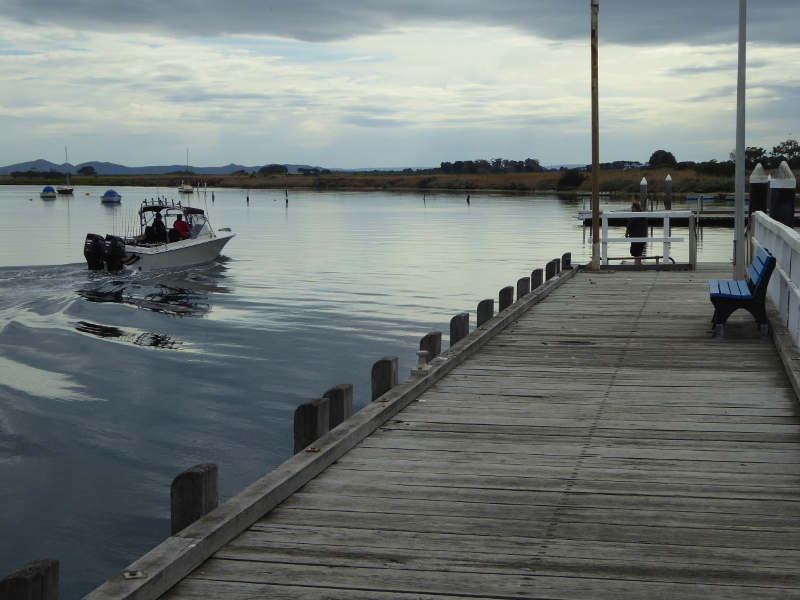 Even the boats that chugged past every few minutes did little to disturb the peace at Werribee Jetty. All of them were small vessels, landing up on the ramps next to the pier, but all quite varied in their crew size and level of activity on board.

One boat had a solo gent aboard, but with a dozen rods standing to attention behind him. Presumably he handles multiple catches at the same time, or he normally has a handful of mates with him on the fishing trips.

Others had two or three, some even four folk aboard. And nearly all were heading straight for the boat ramps, to be then hauled up onto the trailers of the vehicles they had presumably arrived in some hours earlier. 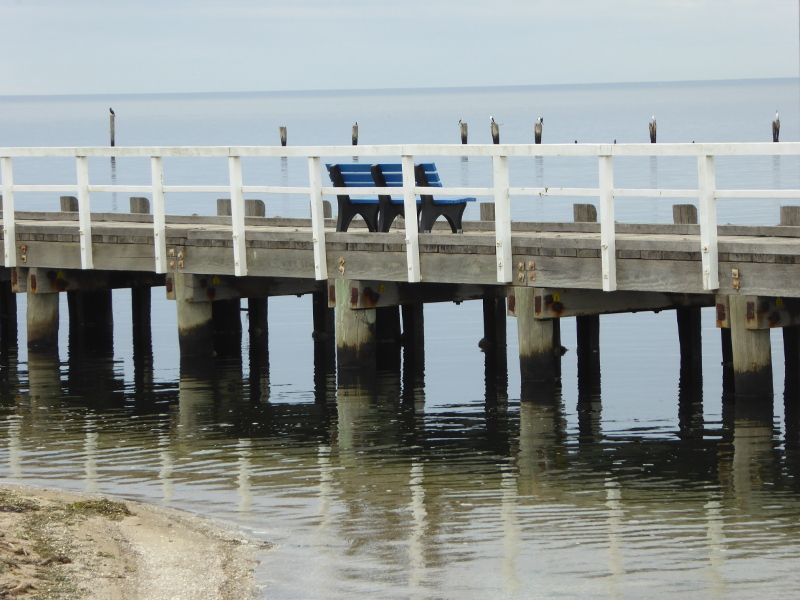 You see, Werribee Jetty itself might have the occasional mooring (mind you, I didn’t see any hooks or mooring posts), but the car park nearby is clearly designed to take a fair number of vehicles and trailers, so I bet this place is quite different on a steamy Sunday in the holidays. 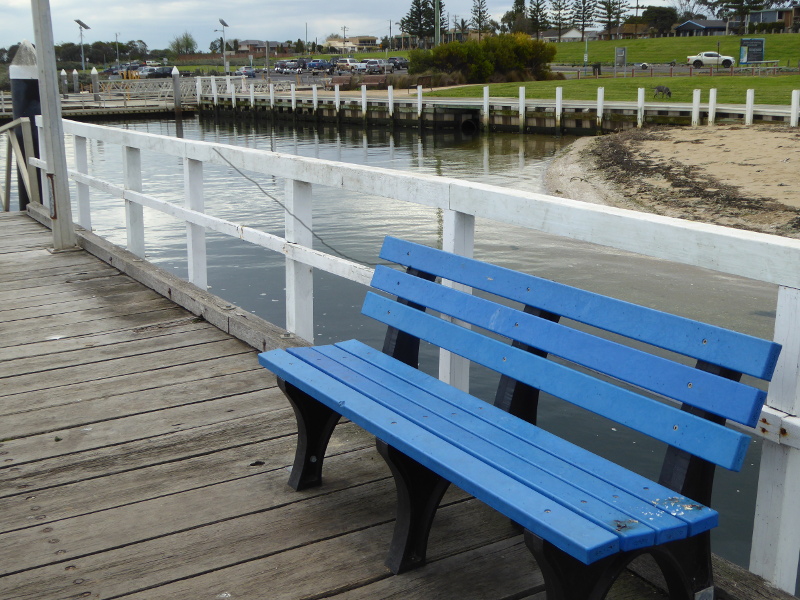 There is a nice blue bench to sit on and watch the water.

And I’m glad they’ve kept the wooden boardwalk for most of the pier structure: about 30m heading out onto the water and about 65m running parallel to the beach. There is a modern section in a bouncy metalwork, but it never feels the same as the solid texture of wood, does it? 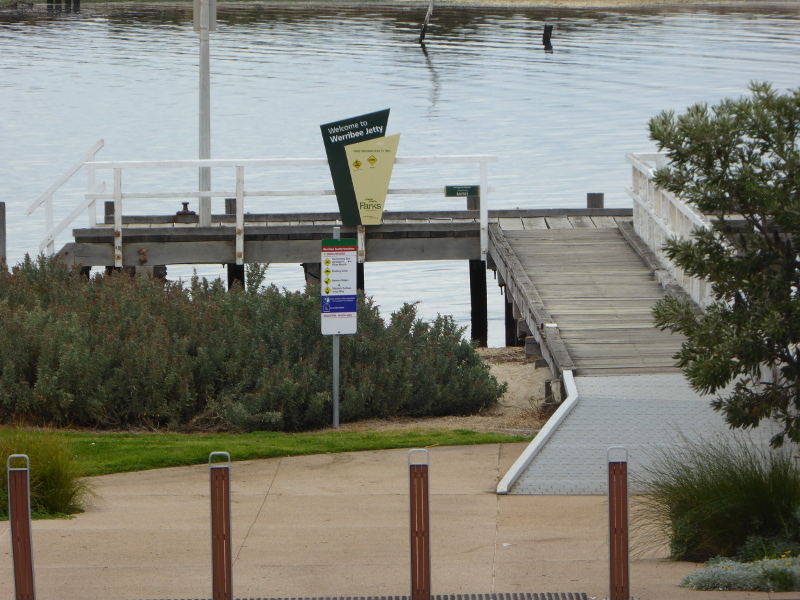 I wonder how busy it gets in summer down at Werribee Jetty. There is an extraordinarily wide staircase leading down towards the pier from the road – and a nearby campsite, which suggests that there are crowds jostling for position on that stairway, or carrying particularly wide equipment and toys? 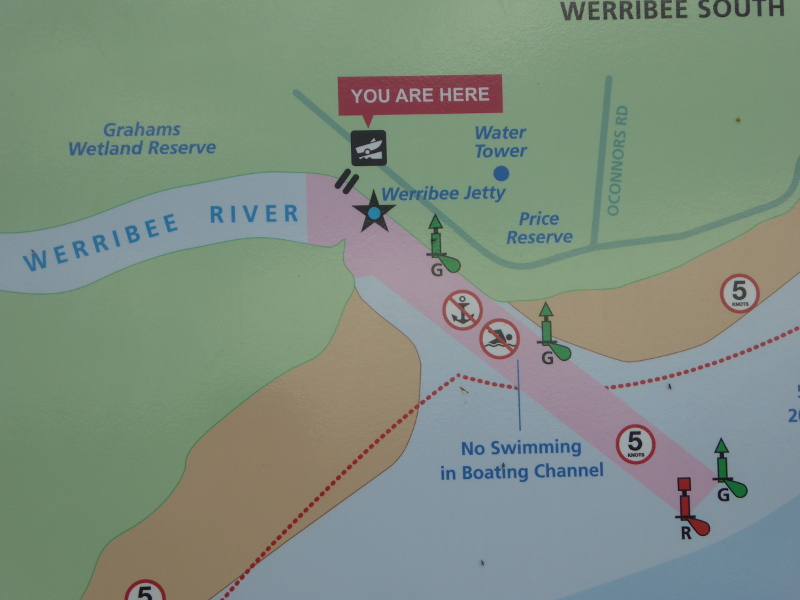 The map near the jetty warns against swimming in the boat channel, so I suppose in summer people also take the plunge here, but you wouldn’t get me in the water here, with much nicer spots not too far away, and I’d be especially wary given the sewage plant nearby and the reports from years gone by of shark-infested waters round here.

One brave toddler was wading up to her knees, though, with Mum keeping a watchful eye, so I reckon this beach must get crowded in holidays.

I’m glad we came when we did, though. Werribee Jetty made for a peaceful afternoon stroll to slow down after a busy few weeks in our lives.

No shelter from the elements here on Werribee Jetty but a bench to rest on.

Toilets in the building just near the car park by the pier. 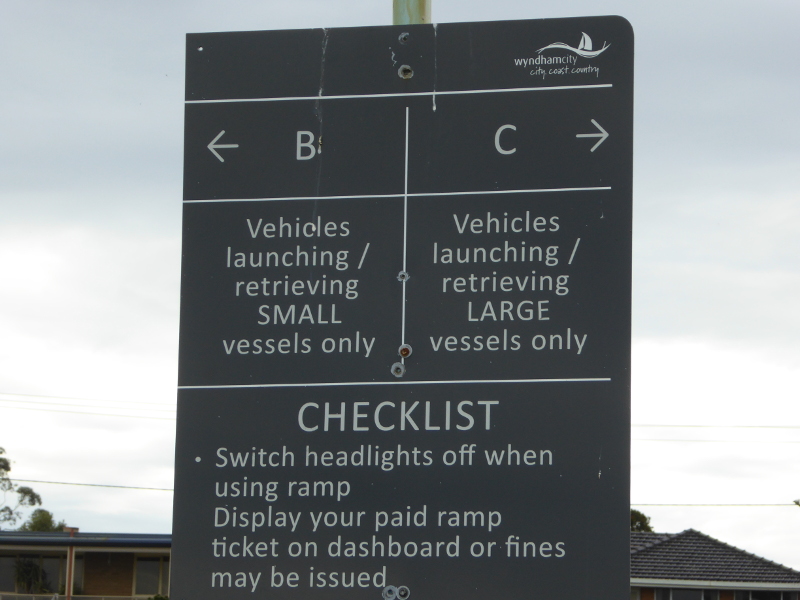 History and stories about Werribee Jetty

The current Werribee Jetty is probably of a 1950s vintage. The last article I found in Trove relates to a December 1949 discussion on the best place to build a new pier at Werribee South Beach to cater for the increase in fishing boats working out of this area. They also wanted to attract people to the Werribee South Beach itself. It’s hard to judge how successful that target was at this time of year, but the number of fishing vessels we saw in the short time we were at Werribee Jetty shows just how popular the boat ramps and jetty still are 70 years on.

However, there was already a jetty near this spot in 1948 as some guy had his boat stolen from its mooring here and that made the papers, so maybe someone knows when the first pier or jetty was built on this side of the Werribee River?

The remains of the original Werribee Jetty I’m guessing are now across the river, with a dozen or so decaying piles still standing as perches for the birdlife of this little estuary.

That pier dated from the end of the 19th century and seemed to be mired in controversy from the start.

The decision on whether to build the original Werribee Jetty caused great discussion back in 1896. At issue at the time was public funding for the railways, including the obligation on the sewage farm here to supply water for the steam trains, whether the land it was built onto was public or private, and who would benefit most from having a jetty (farmers who could sell more produce more quickly) or not having one (a local landowner who wanted instead a tramway to link this area to the rail network).

In the end, the Werribee Jetty was up and servicing boats by March 1897, with its first major visitor being the ‘Ozone’ which took 900 day-trippers, accompanied by music from the Bavarian Band, on a tour across the Bay to Sorrento. The original pier was 500m long and it was hoped that big ocean vessels would berth here so that goods could be exported around the world from Werribee. But ultimately, the pier needed to be even longer than that if it was to reach water deep enough for such large vessels, and the funds never materialised to extend it out further.

It was never used as much as had been hoped for trade, though, and barely five years after it was opened, there were complaints that it had been a waste of public money to build it.

The jetty did, however, start to become the destination for some day-trippers, including people taking part in ‘mixed bathing’. One correspondent to a Melbourne newspaper in 1906 thought such goings-on were ‘not pleasant for visitors’. He suggested baths be built, presumably in part to segregate the bathing again and keep genders apart, though it was couched in public service terms as a useful facility for children to learn to swim. He added that “those who bathe near the jetty do so at their peril as the locality is infested with sharks and stingrays.”

There were not many incidents in the vicinity of Werribee Jetty, though it did hit the news in 1899 after a yacht sank near here, with the loss of six lives. One body was found in the sand near the Jetty, with rather gruesome accounts suggesting it had been half eaten by sharks by the time it was recovered…

By 1918, the local paper reported that Werribee Beach and Jetty was becoming popular with people who liked quieter spots for a day trip than places like Altona, where the rowdy crowd clearly went. The editorial did, however, say that a toilet (‘a sanitary convenience’) would be useful down here (and in 2019 we do have those in place).

That original jetty was dismantled in 1935 as it was hardly being used, and they needed the timber for other projects in nearby Queenscliff. A report in The Age at the time says the last of the paddle steamers to come to this jetty ferried the annual farmers’ picnic for its day trip in 1914, but there were too many difficulties getting close enough to berth here, so it ceased to be visited by bigger boats.

Other links and writings on Werribee Jetty

There are a few nice fishing stories linked to the jetty on this Wyndham history website.

This Flickr discussion group has published all the Trove articles relating to Werribee Jetty so to see some of the articles I used as a source in full, go to the link here.

This is rather obscure, but a 2017 Tweet was trying to find out who Jasmin was – a message in a bottle found near Werribee Jetty.

Check out the last bullet point from a Werribee Rotary talk which looked really interesting for a mention of Werribee River history.

What are your stories and memories of Werribee Jetty?

Surely nobody is still alive today who remembers the old Werribee Jetty before it was dismantled in 1935?

Is this a favourite spot for a romantic stroll, a fishing trip, or maybe just walking the dog?

Comment below if you have anything to add, especially with stories that might bring the new jetty alive since the 1940s?

Coffee or tea near the jetty?

If you know of somewhere do let us know. We found places in Werribee itself but that it some 10 kms away.