This 1938 vintage cinema in Yarraville still towers over what was once a heavily industrialised – now gentrified – part of Melbourne. Beautiful art deco.

I love the Sun Theatre. They’ve converted it into a multi-screen cinema, but done a great job of keeping the overall art deco feel to the place, and on the morning we were there, it was buzzing with hundreds of kids in to see Dumbo! 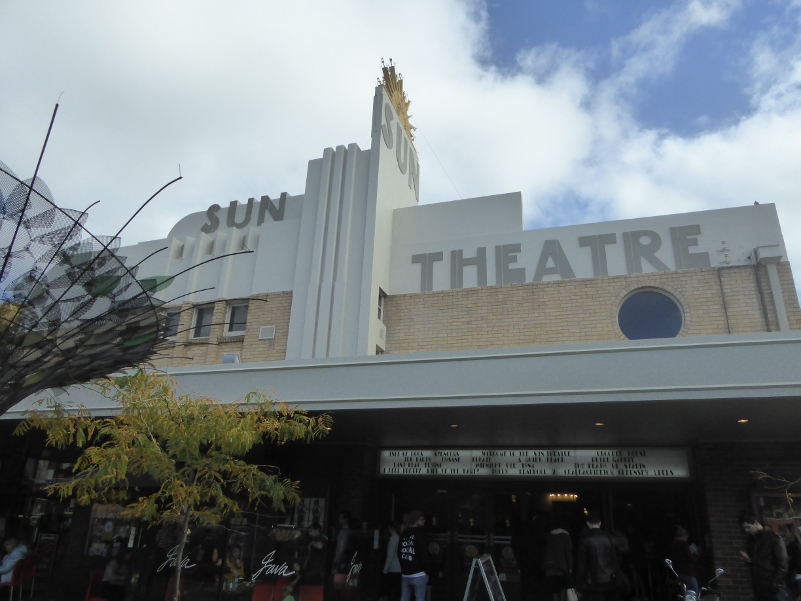 Now, I probably should have joined them to get a view of the biggest auditorium in the Sun Theatre, but I am also a film lover, so we ended up seeing a rather intense drama re-telling the story of the terrorist attacks on Mumbai a few years ago. But even in that room, with just 30 or so seats, the lighting and the feel was still in keeping with the 1930s theatre of old. 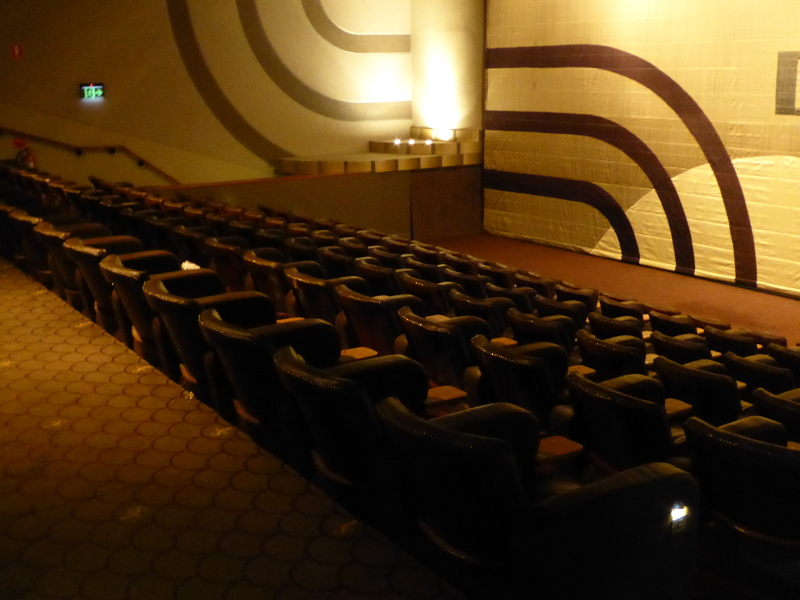 The Sun Theatre dominates the Yarraville streetscape even today so when it opened in 1938, it must have been an extraordinary place; a bright shining light (hence ‘Sun’?) at a time when Yarraville could hardly have been rougher or filthier with all the local industry round here. 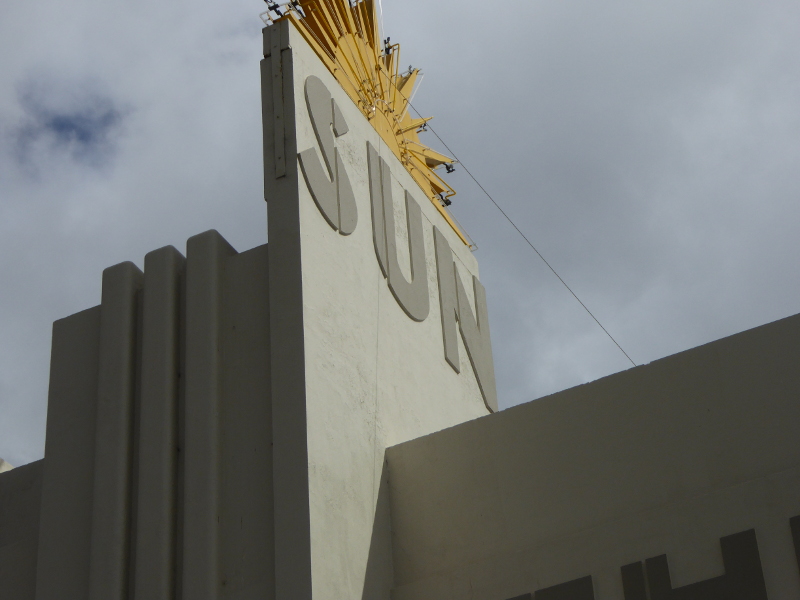 It’s all gentrified these days, with lots of lattes being drunk on sunny terraces, and kids skipping around on the pedestrianised section in front of the cinema. In fact Yarraville is one of those suburbs of Melbourne where you think: “Ooh, might it be nice to move here?”, until you view the property prices and realise it isn’t going to happen.

Yarraville is really easy to get to, though, and the train station is right by the back end of the Sun, so you can see the lovely murals high up on the theatre walls from the train as you get off. 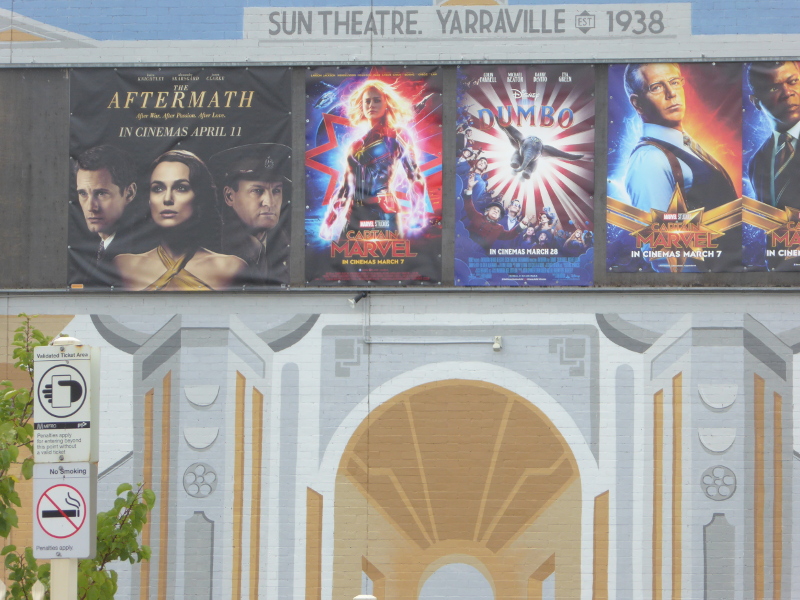 Round the front and the art deco façade looks down over the main street. It’s one of my favourite cinema frontages in Australia. And I love all the little details, like the ST in gold paint on all the front doors, suggesting these also haven’t been replaced since the place opened in 1938. 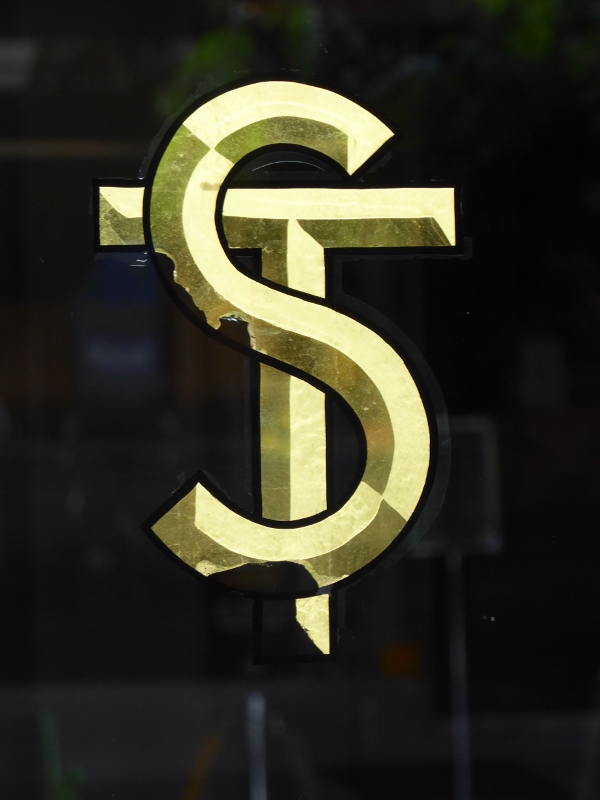 Even the bookshop attached to the cinema is a pleasure to visit. It’s my kind of cinema when you can walk straight from a bookshop into the cinema foyer, and I really must get here early enough one time to actually buy a book before going to the film. 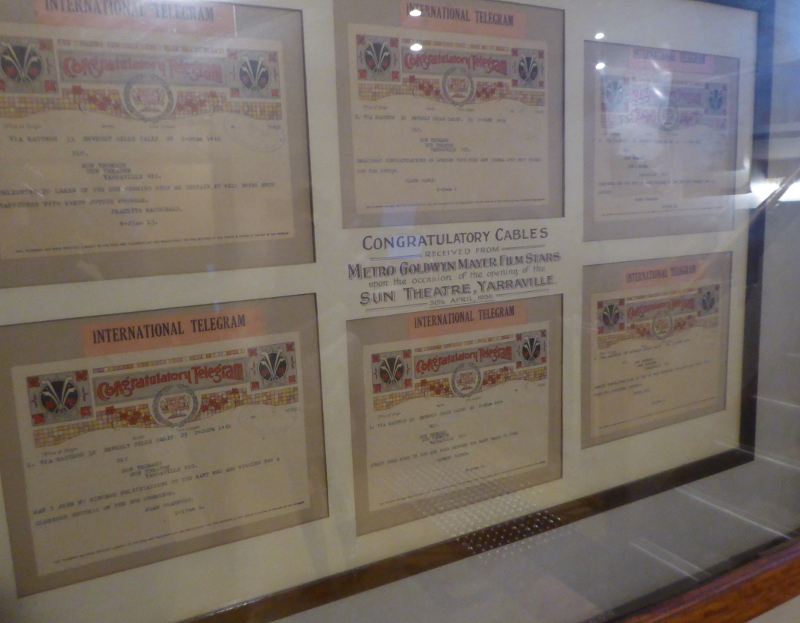 Inside, my favourite little vintage touch is the display of telegrams sent from famous film people to welcome the opening of the Sun Theatre in 1938. I love how that was such a ‘thing-to-do’ in those days, and we’ve seen these in other vintage cinemas, I’m sure. But in the Sun Theatre, they have telegrams from people as famous as Clark Gable and Joan Crawford – so how did that sort of thing work? Surely the Gables and Crawfords of this world didn’t keep a watchful eye on the industrial suburbs of Melbourne, and cinemas were popping up all over the world in the 1930s, so did their agents keep a kind of log of new cinemas on the way all over the world and arrange for these telegrams to be sent. Or what is the real story behind them? Anyway, it’s a concept I love and very much of its time. 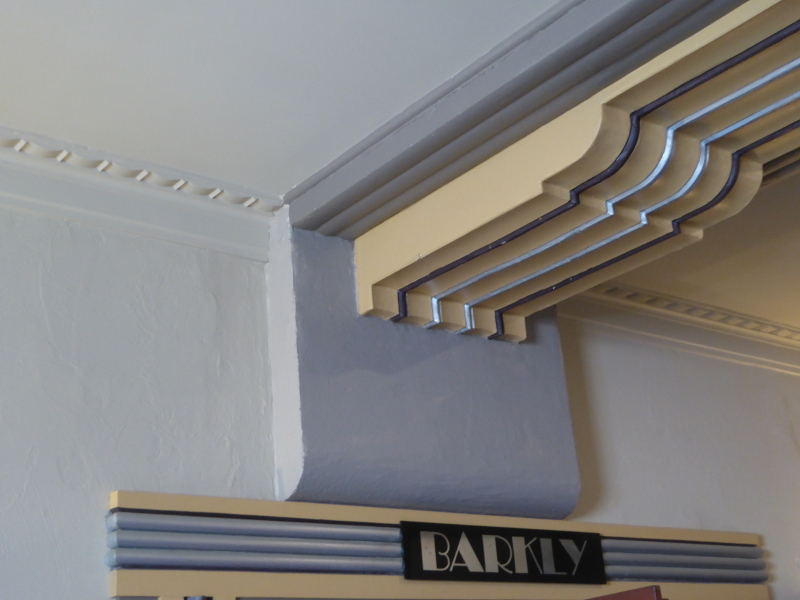 I’m guessing when the Sun first opened and it was a single-screen 1000-plus seater, there must have been a grand staircase of some sort to get folk up to the balcony level. As far as I can see, there is no big staircase these days. You do go up to get to some of the screens but my visits to the Sun so far have involved more narrow corridors (still lined with nice film posters), but I guess in creating a multi-screen, with this many rooms for screening, something had to give, and I still think they have done a fabulous job at the Sun, with a range of films that keeps all sorts of audiences coming back. 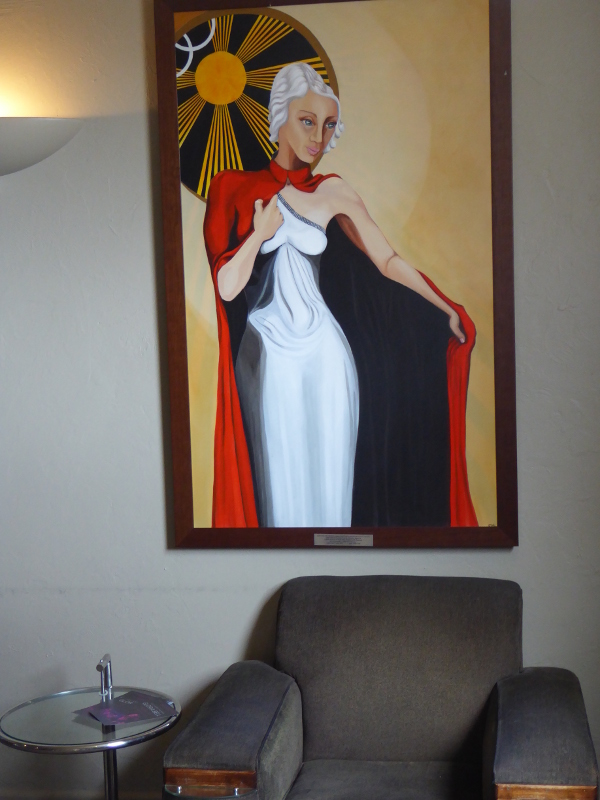 Oh, and final mention, is the little seating area with the big round window towards the front by the entrance to the big Barkly room. Some nice seats here and a good place to sit while you wait and to people-watch before the next film. 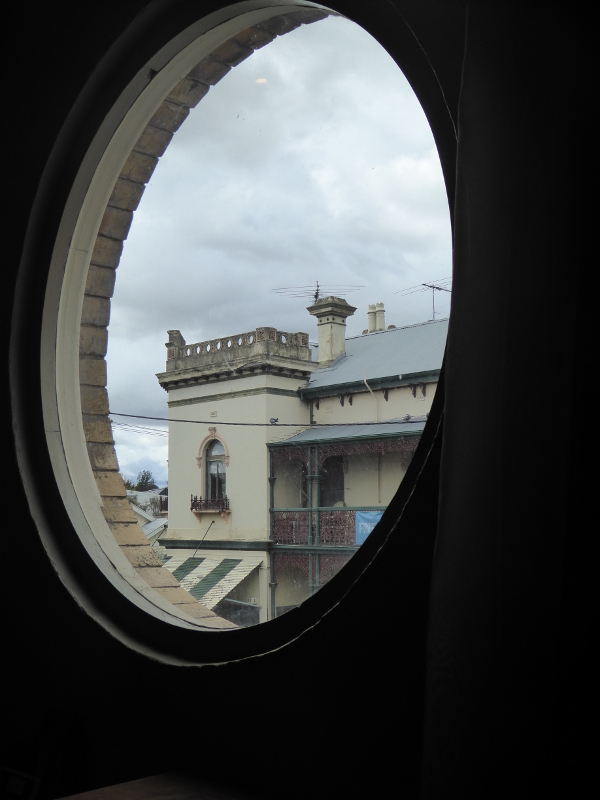 Sun Theatre, I’ll be back.

A standard adult ticket in 2019 is $19, but it’s a lot cheaper on Monday or Tuesday, and there are various concessionary rates.

They have a fantastically varied programme so there is always something on that we want to see.

The men’s toilets are pretty vintage, though they reminded me of toilets I grew up with as a kid in a rough part of Yorkshire, so don’t expect wonderful mosaic or tiling here. I’m still glad they kept the old fixtures, though.

History and stories about the Sun Theatre

The Sun Theatre opened in April 1938 as a 1050-seater single screen cinema.

The first ever film shown here was Maytime, a romantic musical made in 1937 about some lovelorn opera stars; it must have been one of those films that helped the working people of Yarraville escape from the drudgery of daily lives, though not a film I would run to see these days…

The display of telegrams welcoming the opening of the Sun come from Hollywood greats such as Clark Gable and Joan Crawford – some of them are on the wall by the staircase in the Sun foyer.

In 1940, a future top jockey Ron Hutchinson was selling sweets at the Sun Theatre to save money, and it was only when watching films about Kentucky at the cinema that he became interested in horses, and went on to be an internationally known character in horse racing. Even though I was a keen race goer in my teens (1970s), I had no idea Hutchinson was even Australian, let alone that I’d be writing about him some 40 odd years later in connection with this stunning vintage cinema.

The Sun Theatre website’s own history reminds us of the Pram Room, where babies were left in their prams while the parents got a chance to watch the movie, and received a card with a number. A bit like leaving your coat these days. If the baby started crying, your card number appeared on the film screen. Lovely touch.

The Sun was derelict for 13 years till the current owners took over in 1995. 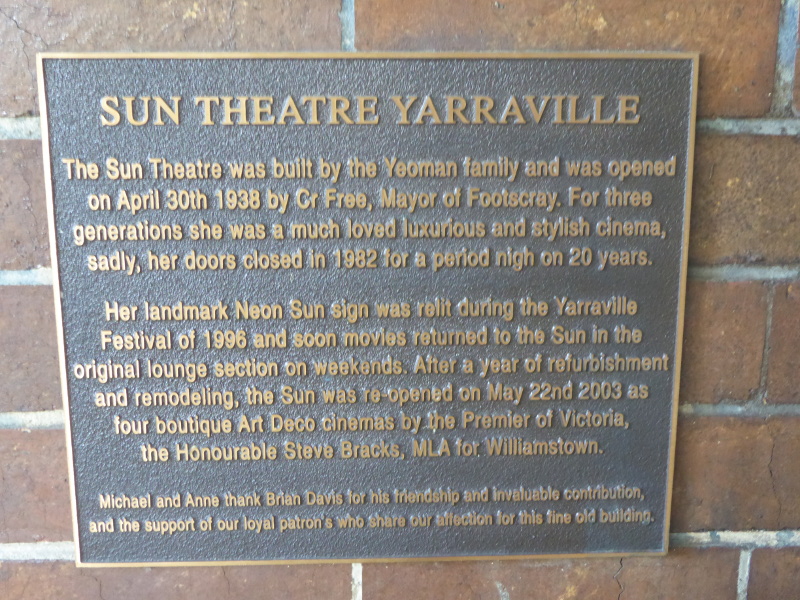 It was run as a film society until refurbishments were completed and there was a grand reopening in 2003 with Premier Bracks present and a bunch of people who had been there in 1938 when the cinema first opened. What a nice touch.

The Sun was used as set in scenes from The Dressmaker in 2015, and in 2016 Quentin Tarantino just turned up one night to see the screening of one of his films, and did an impromptu Q&A after the film! My God, how fantastic is that?

Just one question I still don’t know the answer to, from the Sun Theatre’s own History page of its website. They apparently pioneered the ‘Continental’ form of seating. But what on earth was that?

I had to go for current co-owner Michael Smith, who sounds like a man after my own heart in many ways.

He clearly has a thing for objects of 1938 vintage, flew a sea boat round the world in 2015, following a 1938 Qantas flight path – he went to 68 different cinemas on his journey, which was fuel for his own project at the Sun Theatre and his Masters on the perceived value of cinema to the community. The Herald Sun newspaper covered this on 20 November 2015, though the link to that article is sadly protected by a paywall. Have a look at Michael’s own website where he promotes the book and film that came out of his epic trip – It’s called Voyage of the Southern Sun.

Other links and writings on the Sun Theatre

This website promoting the western side of Melbourne has a video interview with Sun Theatre owner Michael Smith. There was no separate URL for this video but it came up as Video 1 when you click this link.

Deakin University student Jessica Meli produced a wordpress blog on the Sun Theatre Yarraville as part of her studies. It makes for a fascinating read on the history of the cinema.

This art deco buildings blog has a series of entries on the Sun Theatre Yarraville.

There’s more from Deakin University journalism students on the Sun Theatre via their Dscribe website.

Mamma Knows West also picked out the Sun Theatre as a go-to place in the west of Melbourne.

The Age newspaper celebrated the rebirth of the Sun Theatre back in 2003.

What are your memories of the Sun?

Can anyone help with an explanation of what “Continental seating” might once have meant?

Any other good stories or memories to share about a favourite moment at the Sun Theatre in Yarraville?

Yarraville is awash with good coffee these days, and we have tended to go to Wee Jeanie, on the main street round the corner from the Sun Theatre. On our last visit, though, we discovered a little coffee shop over the railway tracks on the side you need to head back into Melbourne. Dad and Dave’s Cafe was the rather unlikely name, but this has now become our top tip for best coffee in Yarraville.