First opened in 1859, St Leonards Pier is more a fishing haven these days than a ferry stop, but the old boardwalk still curves round to form a rather unique shape.

St Leonards Pier on the Bellarine Peninsula doesn’t have the charm and quirkiness of nearby Queenscliff Pier, but I’m glad I got to visit. I was there on a Sunday lunchtime and seemed to share the space with a whole lot of people fishing, a group of lads doing acrobatic dives into the water, and the odd family with kids peering into the water searching for stingrays. 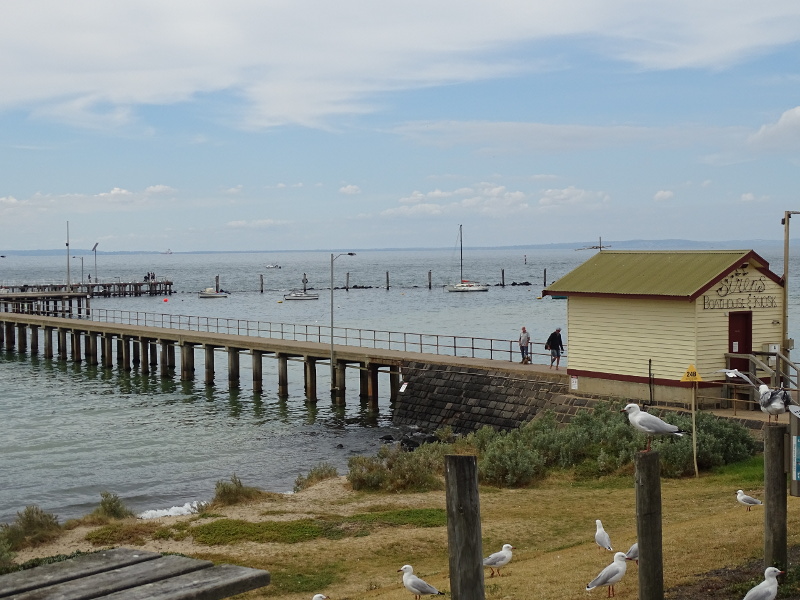 From the car park at the end of St Leonards’ main drag, you have a great view down over this pier, with its old shed on the land end, and then a long finger stretching out into the bay and then curling to the right, like an index finger. 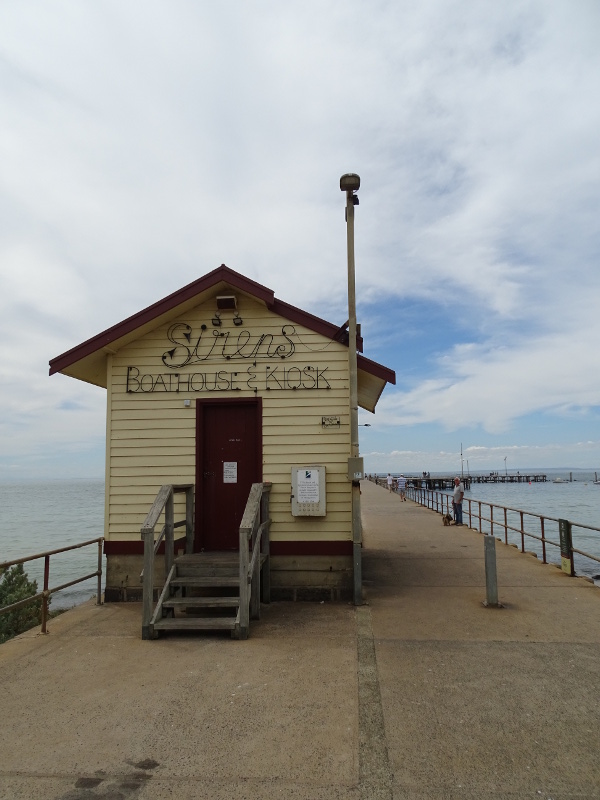 That shed might once have been a kiosk, and was probably originally built for sorting and storing fish, but it looks now as if it might be someone’s studio, it was locked up as I walked past, but there was a radio on inside playing music, so somebody was home and probably at work in there. But it no longer looks like a public space. 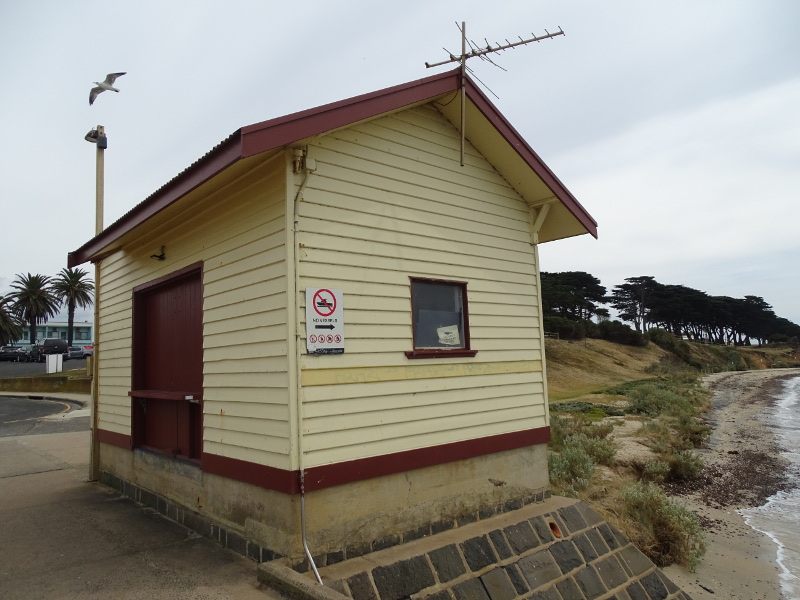 The first 200m or so of St Leonards Pier is concreted, so I wasn’t totally sure it would qualify for inclusion on the Vintage Victoria piers of Victoria pages. 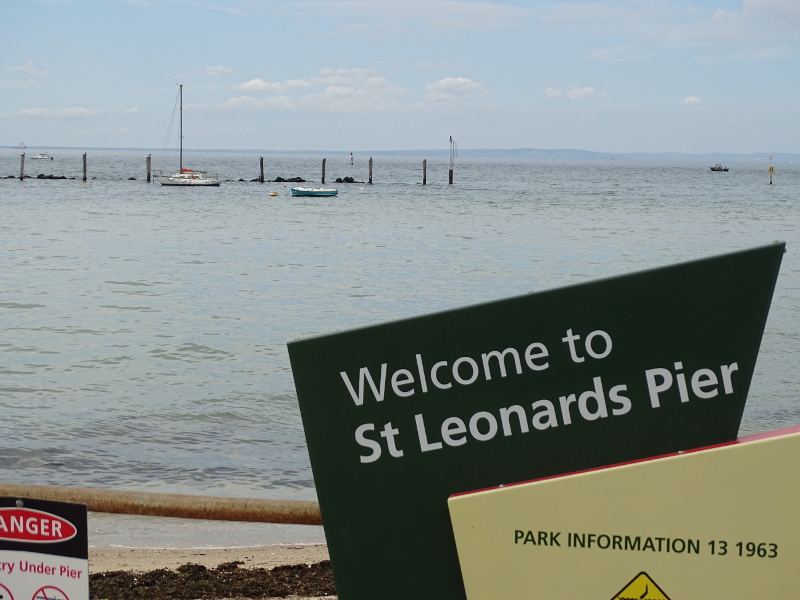 The water looked lovely, though, at maybe 1.5m, with good-sized fish darting about on both sides, and the occasional stingray gliding along close to the sand. 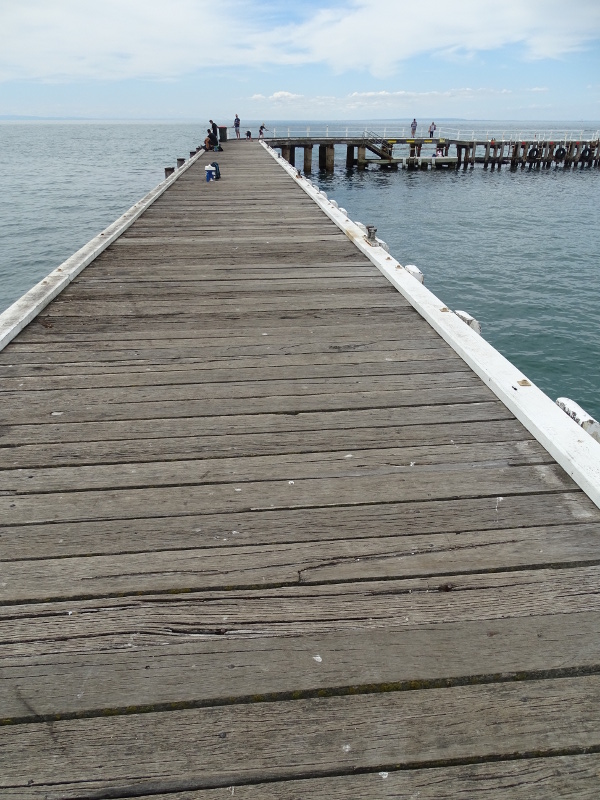 The pier switches to old timber boardwalk at this point, and it was here that the group of kids was performing gyrations in the air as they used the decking as a diving platform. The square landing area near here is probably the most rickety section of St Leonards Pier, and this mooring block – in timber – looks like it has suffered from the ravages of time and tides. 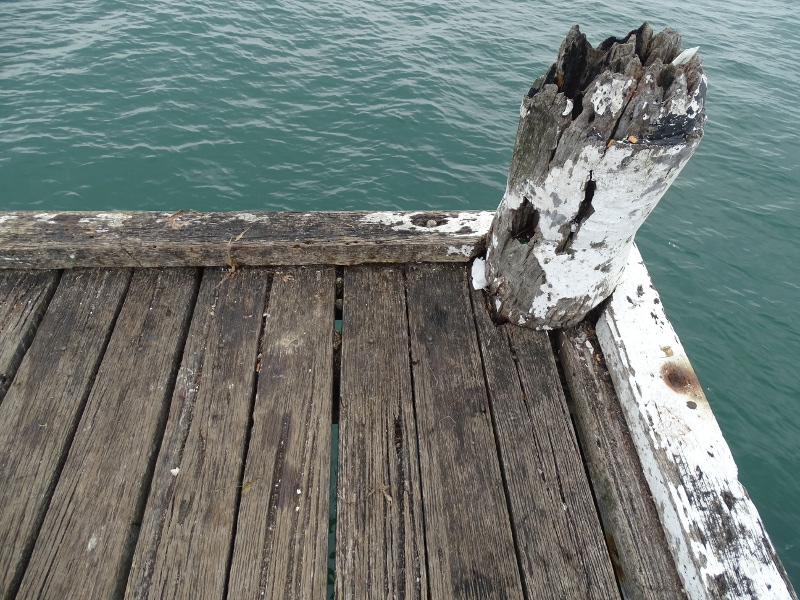 Beyond this section, the boardwalk continues in a gentle curve round to the right and stretches on another 100m or so heading towards the Heads. 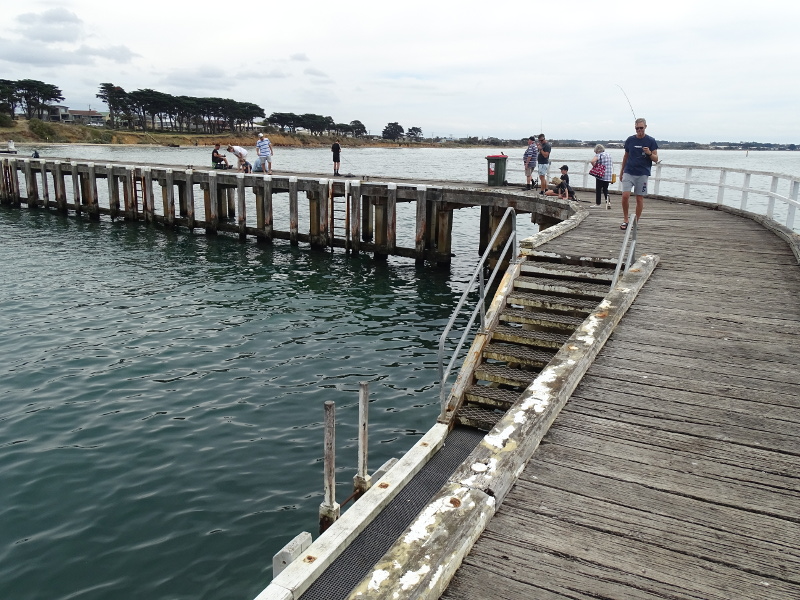 And then there is a final section to the pier, with a more modern walkway material, but timber railing and steps that look pretty vintage, so I’m not sure how they managed that. 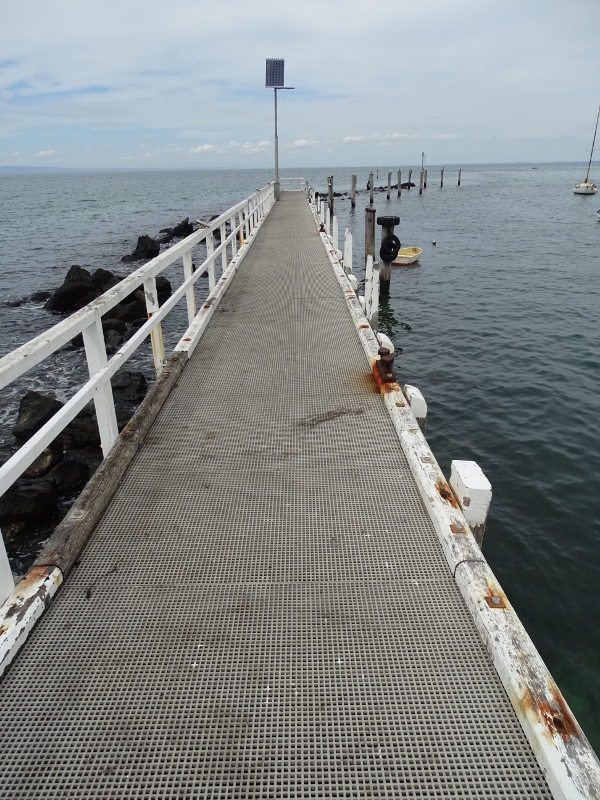 But there’s more still to St Leonards Pier, or it looks as if there once was. 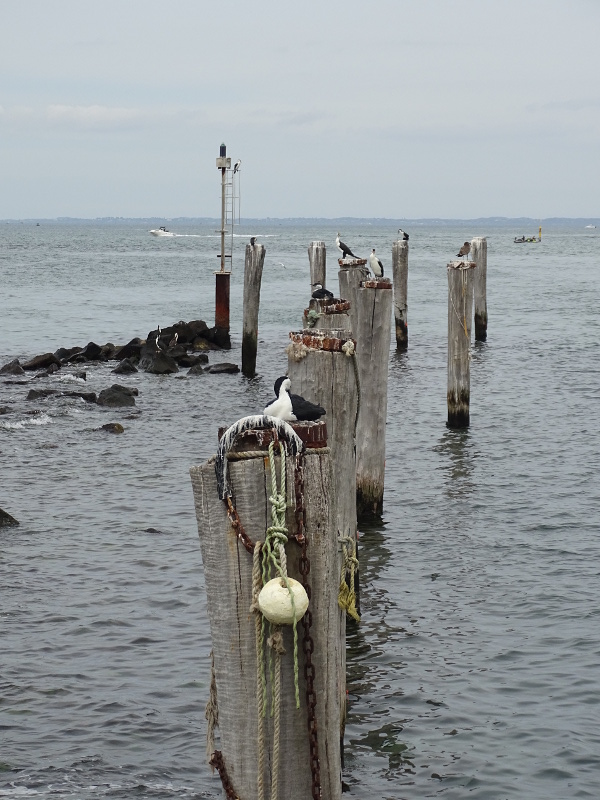 Beyond the end of today’s pier, there are half a dozen piles sticking up above the water, probably once carrying the pier that little bit further than it extends now, with only these impressive sea birds able to take advantage and take the air. 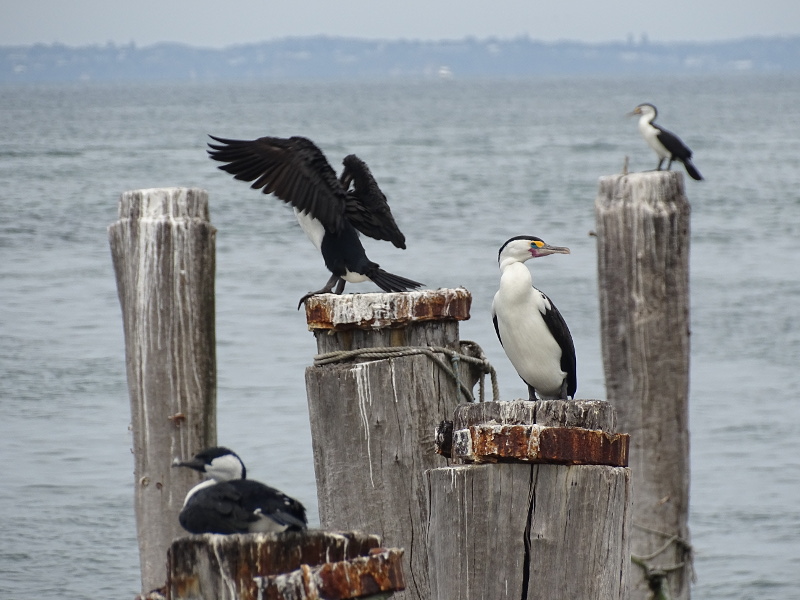 Back on shore, I checked out the sculpture on the reserve next to the pier (according to an information board next to it, it may not be there much longer, which seemed a shame). Carved out of cypress that used to line the shore here, it represents the four elements, but also provides nice framing of Melbourne’s CBD on the distant horizon – a clever use of art and space, especially as I might not even have spotted Melbourne if the sculpture had not guided my line of sight that way. 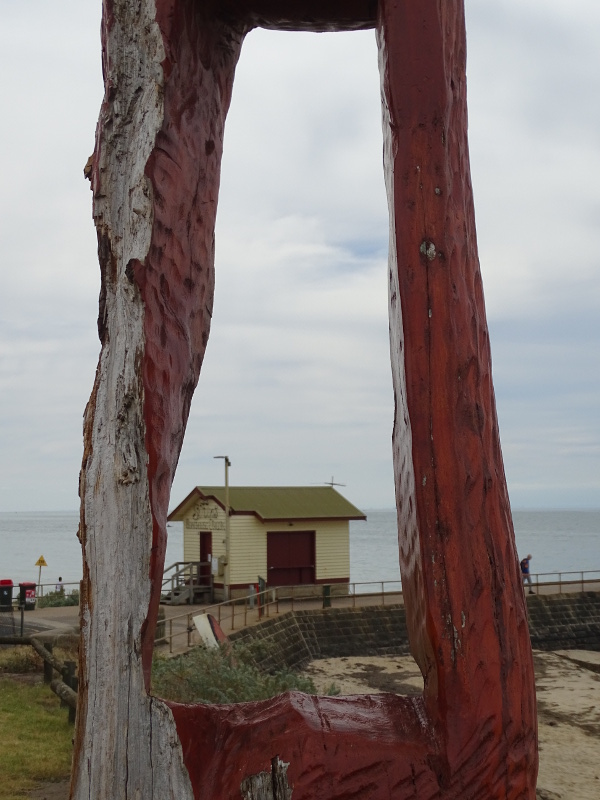 No benches and no shelter along the pier at St Leonards. A good sized car park looks right over the pier.

Nearest toilets are back along the main street, about 100m from the pier.

The first mention of St Leonards Jetty on Trove database dates from 1860, and was simply a list of roads in the area.

When the pier was first built, there was an old hulk sunk in the sand just beyond the pier – a red flag used to mark the spot, and some reports said that fishermen would cross the bay from Melbourne to retrieve copper castings off the wreck. A news report in 1939 claimed that when the pier was extended, they built over the hulk, but other reports from the early 1870s suggest contracts were put out to have the wreck cleared from the water. The 1939 report asked readers if anyone knew the name of the hulk – I wonder if they ever found out?

In 1879 there was a fight between workers on the pier, one of the men losing five teeth in the tussle.

The contract to build a shelter shed was awarded in 1880.

In 1900 a storm in the bay caused a boat to slip onto the reef near the pier when trying to deliver timber from Gippsland for the repair of the pier itself. The boat was freed at high tide, but the captain suffered cuts to his face from sails buffeting freely in the wind.

Another storm in November 1912 saw a local man’s racing boat smashed against the pier in heavy seas. The boat was called the Eiffel Tower.

There used to be a tramline along the pier, which was widened in 1912. 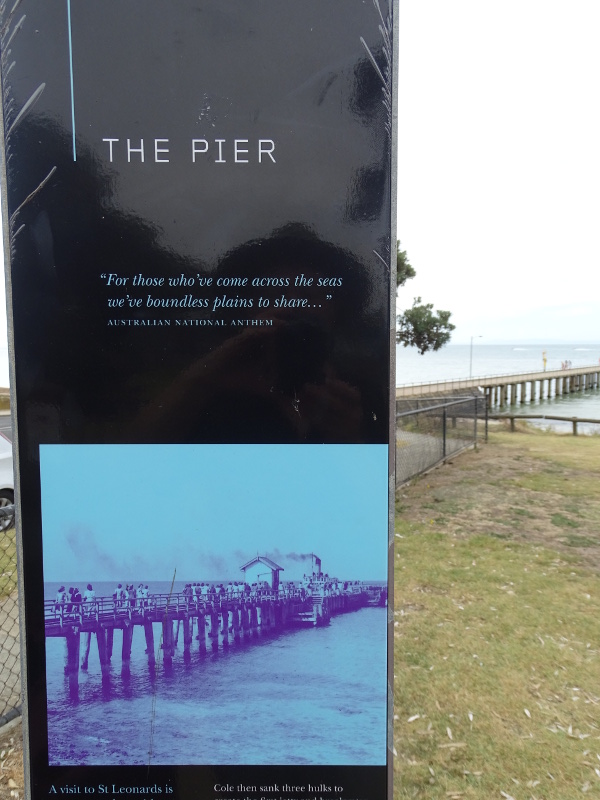 The body of a leading member of the Grand United Order of Odd Fellows was found floating in the water near St Leonards Pier in August 1932. H.G. Brice was his name.

6-year-old Thelma Norman was rescued from the water under the pier by an ‘elderly’ man in January 1937. He won’t be around anymore to tell the tale, but I wonder if Thelma is still with us?

There was drama for people promenading on the pier over Christmas 1945, as they witnessed a yacht in trouble when it ran onto a reef within sight of the pier. A fishing boat launched to bring the three-man crew to safety, but the yacht sank when it came off the reef.

A shark 14 feet long was caught off the pier by two professional fishermen in February 1947, a photo of the catch making the Melbourne newspapers the next day.

Other links and writings on St Leonards Pier

Victorian Places website has a nice entry on St Leonards – it gives a more general history of St Leonards but mentions the jetty.

The Victorian Heritage Database gives the name St George to one of 2 hulks sunk here before the jetty was built.

The Geelong Advertiser ran this 2016 story about a local stingray called Stumpy.

What are your stories and memories of St Leonards Pier?

Does anybody have any good stories to bring the history of St Leonards Pier more up-to-date than the last good Trove tale from 1947?

Does anyone know if Thelma Norman (quite possibly married to a different name) is still with us to remember her rescue as a 6 year old?

Can anyone still remember when the tramline was still in place (even if no longer used)?

Or just get in touch if you have a favourite memory of your own from a visit to St Leonards Pier.