There’s a mix of the modern and vintage in St Kilda Botanical Gardens. The rose garden and rotunda are my favourites, along with the Rain Man sculpture and the radiator from Hull

St Kilda Botanic Gardens are a really peaceful haven on the edge of this bustling seaside suburb better known for its cake shops and cafes spilling out into pavements. 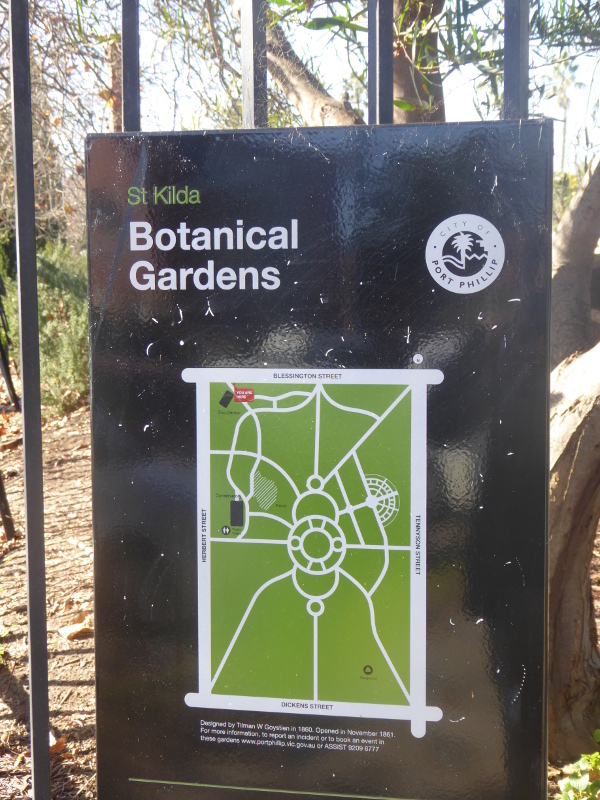 I visited on a warm sunny Sunday morning in autumn, a little too late in the year to catch much of the leaf turn but late enough in the morning to catch countless couples stretched out on the lawns, enjoying a quiet moment in the sun. 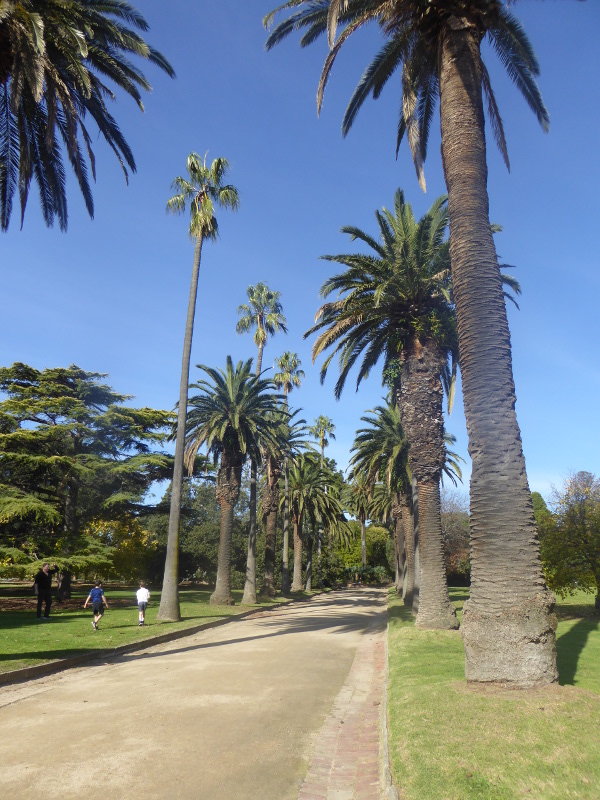 It’s not one of the Botanic Gardens with a ‘Wow’ factor – there’s no vintage viaduct or gold rush sculptures lying around the place, but it’s just a really lovely spot for some peace and tranquillity.

There are at least half a dozen gated entrances to the gardens, most of them with recently-commissioned ironwork. 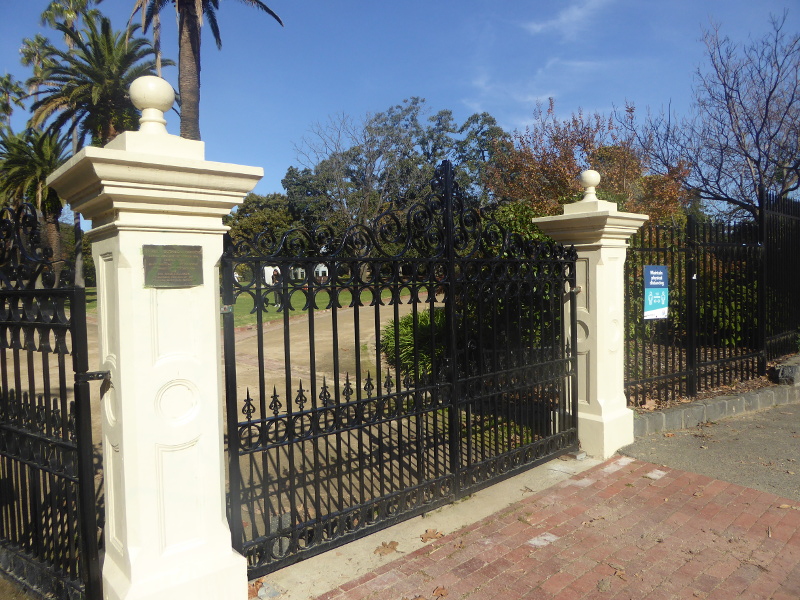 These gates – on Tennyson Street – looked more vintage but sadly there was no signage to tell me where or when they were made. 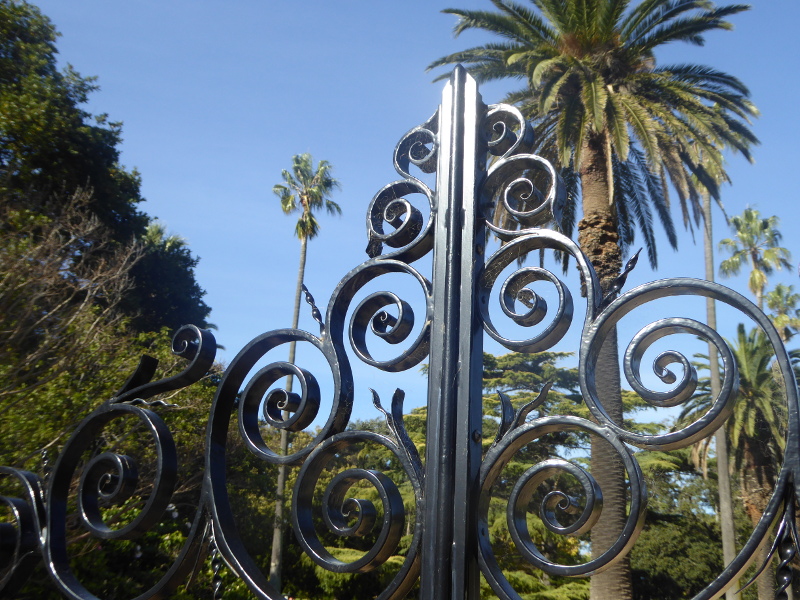 The ornamental pond is a 1980s creation, and I did like the ‘RainMan’ sculpture and fountain in the middle. But there was no sign of the lake or pond that was finally created in the 1920s after all the disputes and delays over the bitumen excavated in earlier years, about which I had read in my Trove trawl before the visit. 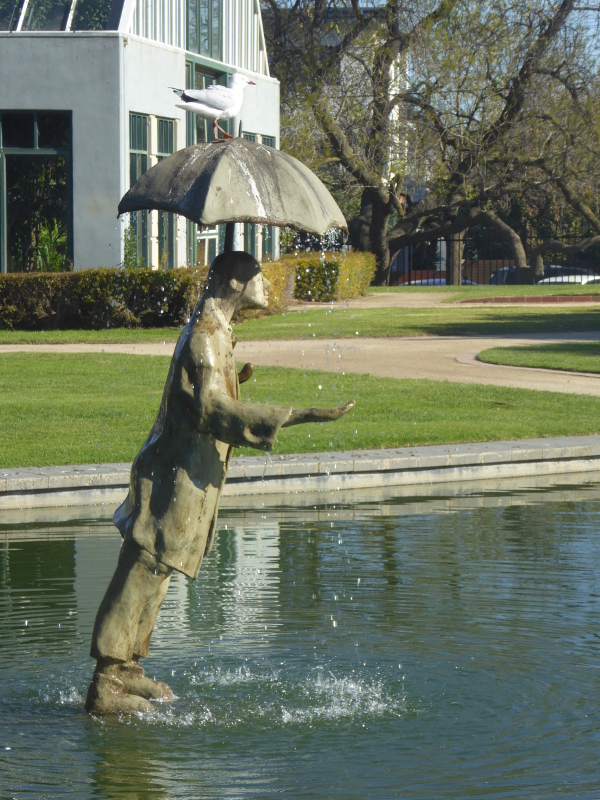 I liked the way St Kilda Botanic Gardens have added new features, though the social historian in me would have liked more signage telling me stories of some of the older structures. 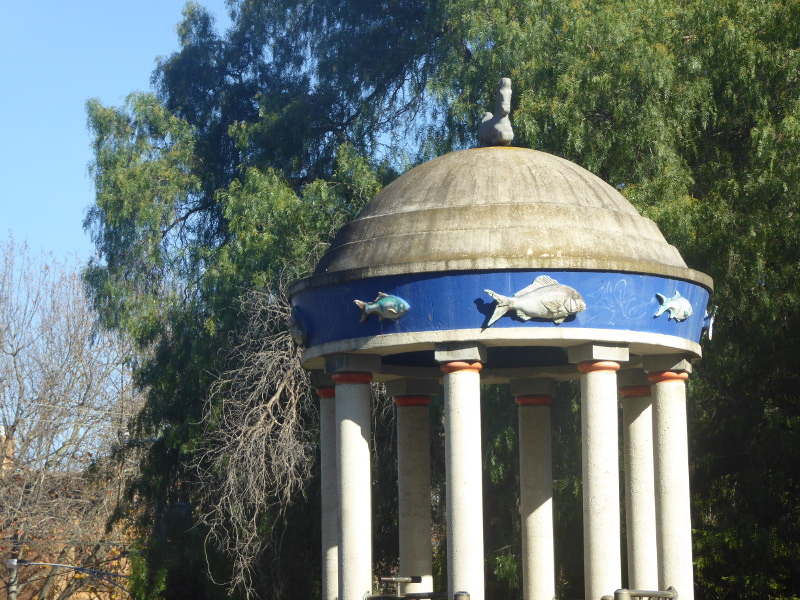 This sunken kids’ playground, for example, looked fantastic with slides and climbing frames, but what vintage is the fountain-y structure it is built around? 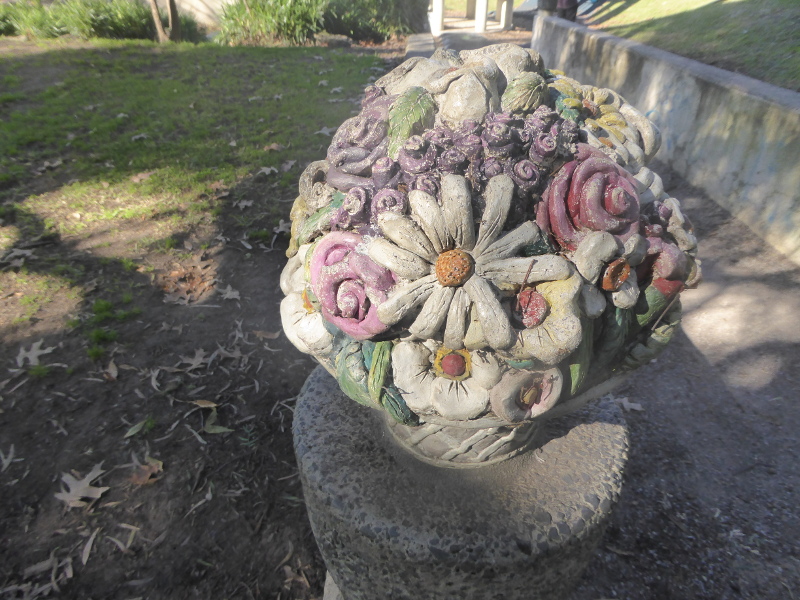 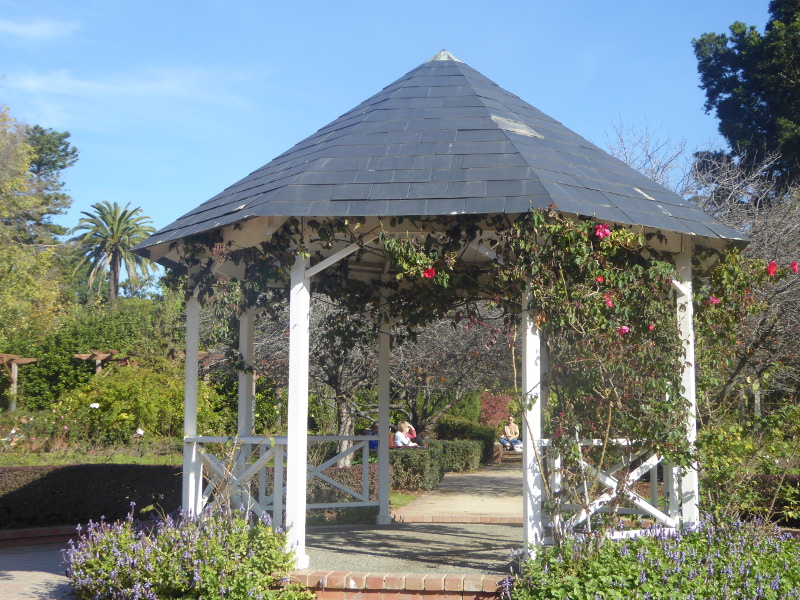 The rose garden must be stunning in spring. It, too, is a 1950s creation apparently, so I assume the rotunda in the middle is also (unless someone knows better?). 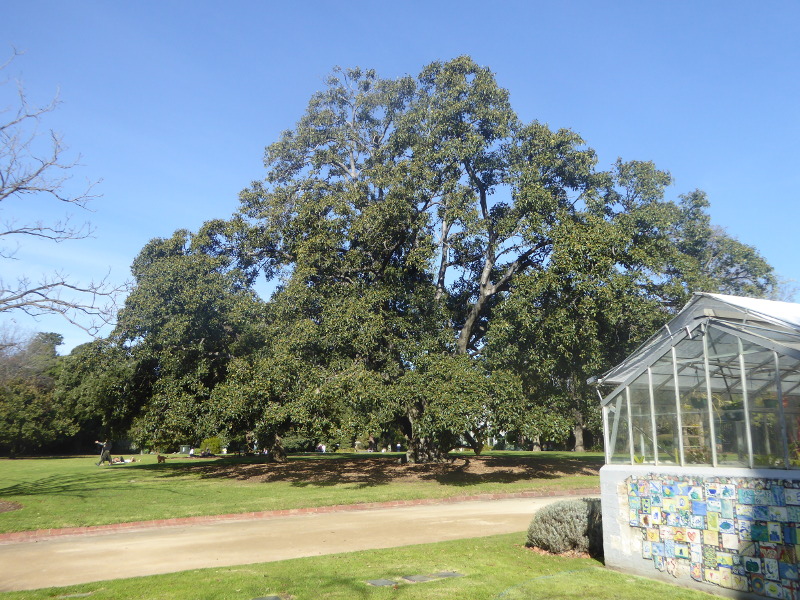 There were several Moreton Bay Figs, any of which might well have been those planted in the early years of these gardens in the 1860s.

Flowers were few and far between in late May, but I’m sure that changes enormously as winter turns to spring. 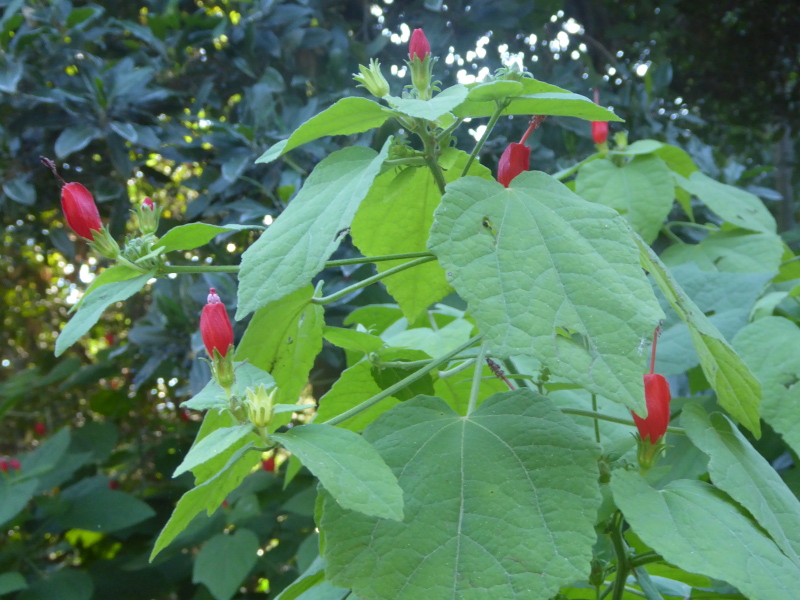 Being from Hull in Yorkshire, I was delighted to see this rusting old radiator was manufactured in my home town. But what purpose did it serve? 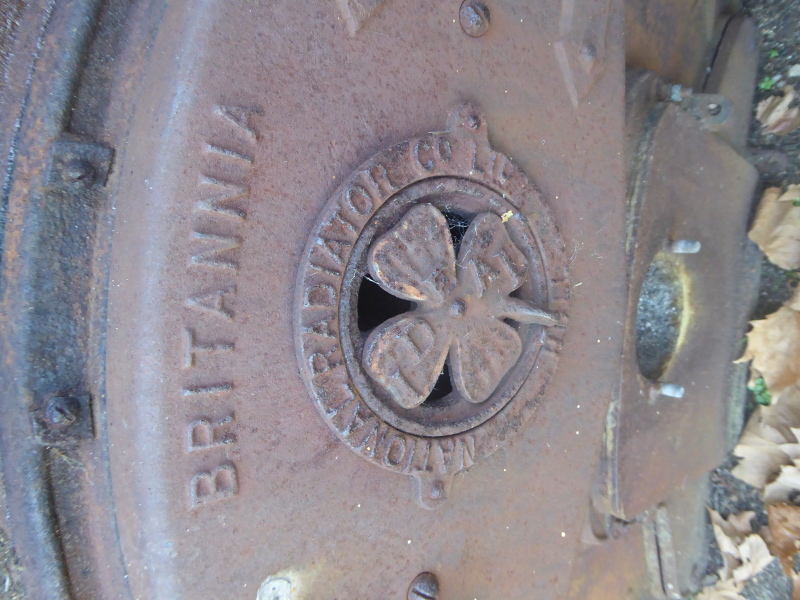 And same question for the brick chimney it sits by? 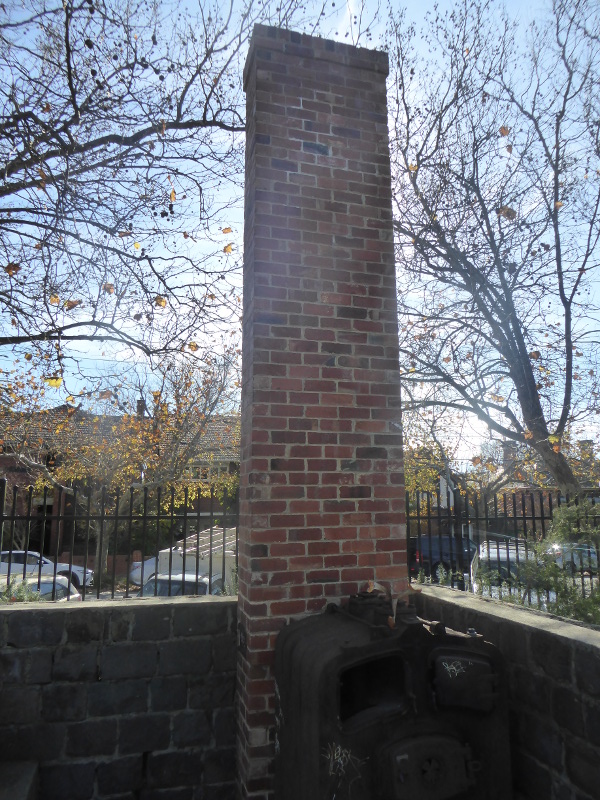 At least this pavilion has a sign telling us it was put up in 1929, so that definitely keeps the vintage label. 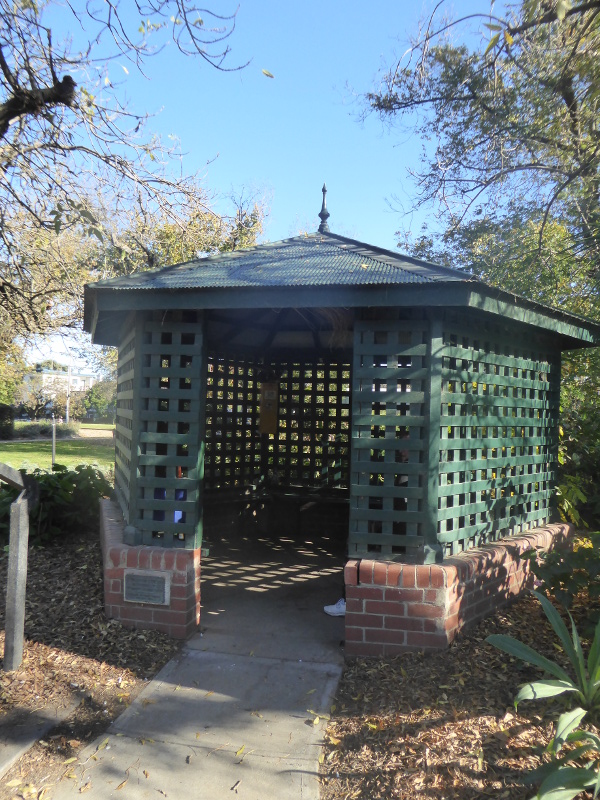 Lots of lawns to lounge around on, but also plenty of seating dotted around the garden.

Toilets in the modern information building by the Rain Man lake.

Supposed to have been built in 1858, but a press clipping in 1860 was still wondering where the Gardens might end up being situated.

Apart from the local school holding its prize-giving event in the botanic gardens, there didn’t seem to be much in the news here judging by the Trove press clippings.

A very sad story cropped up in 1883, when the body of a new-born girl was found in the gardens wrapped in calico and brown paper. She had died of exposure, apparently, and the identity of her mother was never discovered – I wonder what happened to the parents, and how they lived with what had happened.

There was some controversy in 1892, when it was discovered that the soil in parts of the Gardens could be used as a base for making tarmac and cement for road-building, and the local authorities sent in diggers to make the most of this find. The result was the appearance of a de-facto quarry in the Gardens grounds, much to the disgust of some residents.

But Council discussions showed divided opinions on the matter: the ground being Council owned meant enormous savings to the road-building budget so benefiting all residents, said some; the digging should continue; others argued that the ‘quarry’ hole should be made into a lake to ornament the gardens; but only if that didn’t mean the money-saving stone supply didn’t cease, argued the other side. It was an interesting case of 19th century NIMBYism, or was it early Green politics in action? In any case the lake idea was endorsed…

Six years later, there was still an unsightly hole in the middle of the Gardens, water supply apparently being the sticking point in creating the lake. One suggestion was to direct the local sewage there, though I’m not sure what that would have done for the fragrance of the gardens.

I’m not even sure at that stage how much planting had been done in the gardens, as there were calls for a massive programme of tree and flower planting to be done to what sounded like a fairly bare reserve at the end of the 19th century. In September 1900, the matter was still not resolved, though winter rains had meant that stagnant water now lay deep in the hole, worrying some councillors about the health risks come the summer.

In 1913 it finally looks as if flower beds were planted up, though I’m not sure they had built the lake yet still, as there was talk of ‘excavating’ for a lily pond. Later in the same year, the Melbourne Leader’s Horticultural Reporter questioned whether St Kilda’s gardens truly lived up to the name ‘botanic’, but he said they were worth a visit anyway. The gardener at the time is said to have loved ‘masses of colour’ and never planted less than 500 of a variety in one spot. The lily pond was finally built in 1913, too.

One reporter in 1919 thanked the long-time curator, Mr Watkins, for his love of colour and for turning the gardens into a place to enjoy after years of being a ‘rambling place of wild wilderness’. The 1919 correspondent spoke of two Moreton Bay Figs – are they among the Moreton Bay Figs still there in 2021?

As usual the stories on Trove dry up largely after the 1940s. One newspaper, the Australian Jewish News is available right up to a few years ago, though, and it reports regularly on chuppah wedding ceremonies taking place in St Kilda Botanic Gardens. Has anyone attended one of these? Are there other multi-cultural events that take place in the Gardens these days?

What are your experiences at St Kilda Botanical Gardens?

Does anyone just have a good memory they’d like to share about a visit to St Kilda Botanical Gardens, even from the last few months or years?

Does anybody know where those ironwork entrance gates were forged?

Has anyone attended one of the chuppah weddings in the Gardens? Are there other multi-cultural events that take place in the Gardens these days?

Does anyone know about the radiator from Hull or the chimney that stands next to it today?

Can anyone fill in with any stories about things that happened in or around Botanic Gardens to bring my history section beyond my last story from the Trove database?

Other links and writings on the St Kilda Botanical Gardens

The Nomadic Explorers have some fantastic flower pics from St Kilda Botanical Gardens.

This is the Melbourne Playgrounds entry.