Pelicans have a starring role at San Remo Jetty today, but this used to be the launch pad for ferries over to Phillip Island, and the narrow stretch of water has seen many rescues of people falling in

The pelicans parading on the reserve near San Remo Pier were the first thing we spotted, as we arrived on this drizzly morning not long before midday. They seemed to be gliding through the shallow waters switching direction every now and then before deciding en masse to clamber up the grassy edge and stand on the shore. 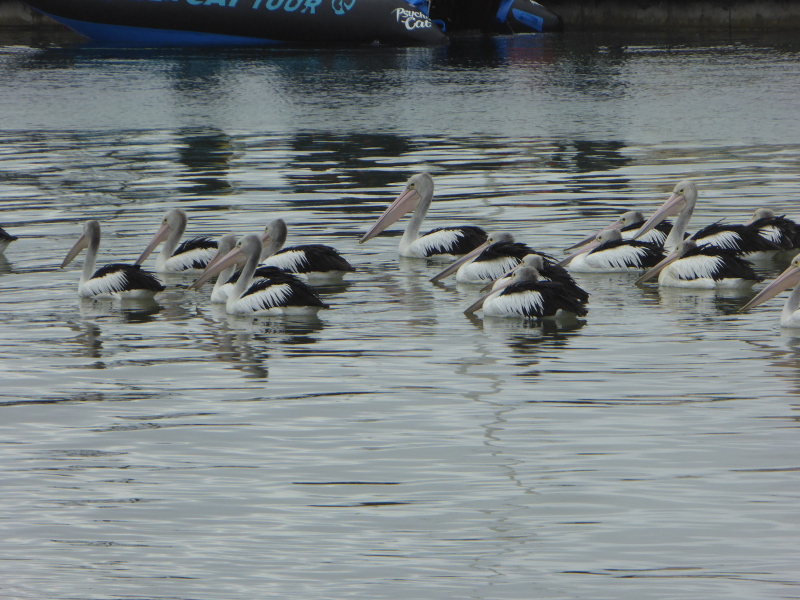 It was then that we realised why a crowd was building, and why the pelicans were gathering in such large numbers. 12 noon every day is Pelican Feeding Time at San Remo Jetty. 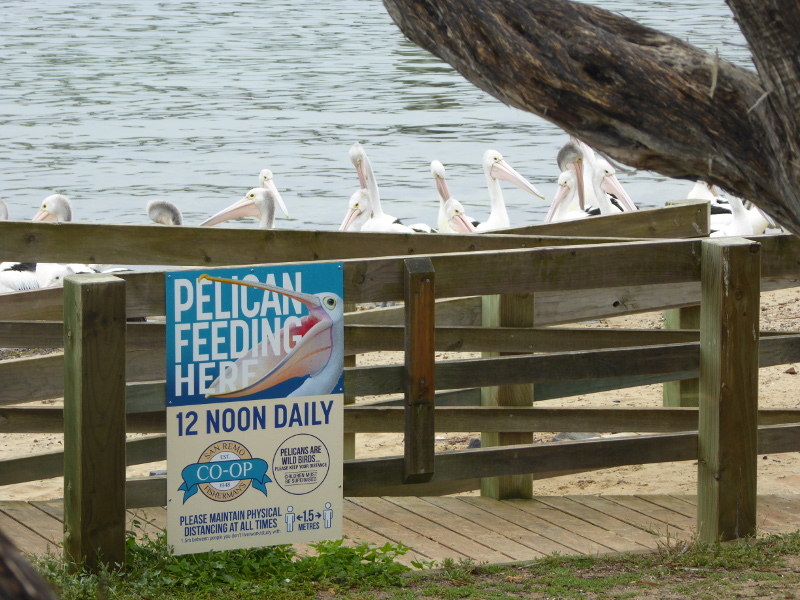 We love pelicans, but didn’t need to watch a feeding frenzy, so wandered off to stroll along the pier itself. 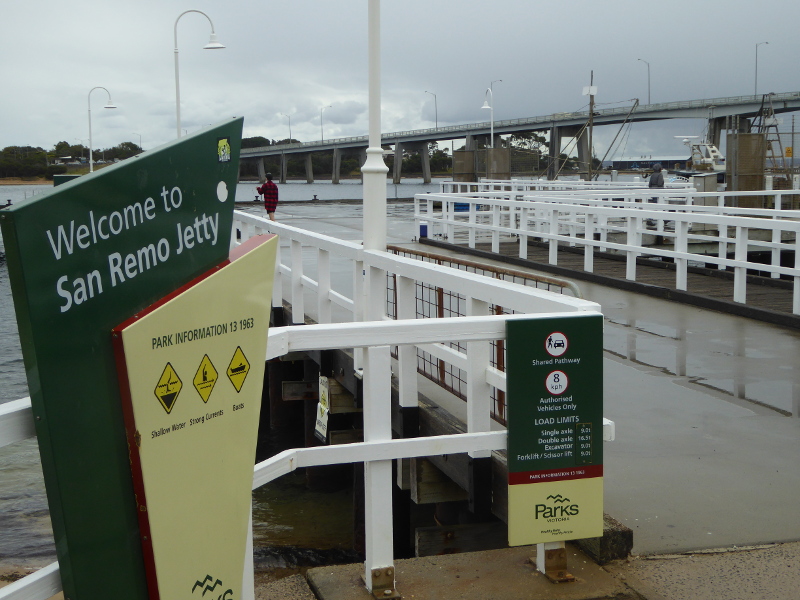 Now, the thing about San Remo Pier (or Jetty, the two names seem almost interchangeable across different media and sources), is that it also has two prongs: one is more solid, concrete and modern. This is where the serious, ocean-going fishing vessels seemed to be moored. 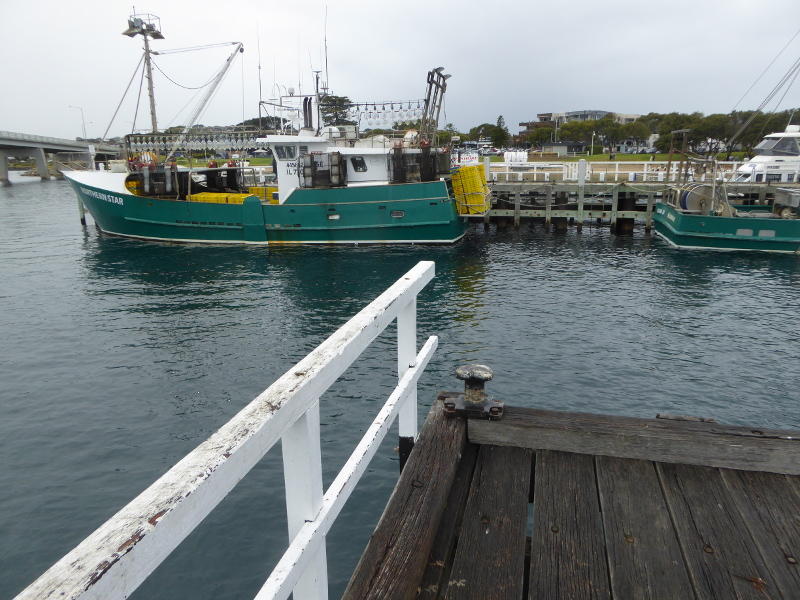 Some of these clearly go for extra large catches judging by the number of fish crates on board, and the distinctive lighting suggests they work through the night too. Must be quite a life. 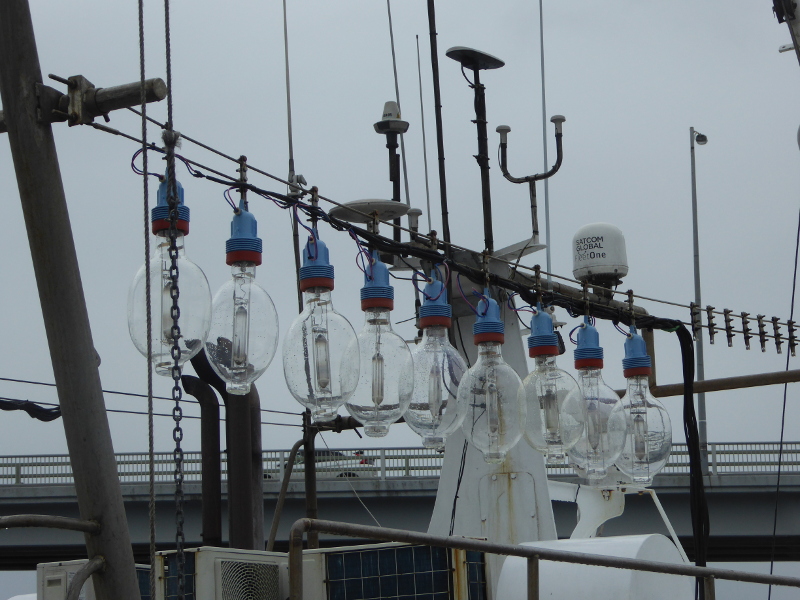 The second prong of the pier also has a concrete section – with gateway indicating that this part also closes at night. But it has retained a vintage boardwalk section, too. 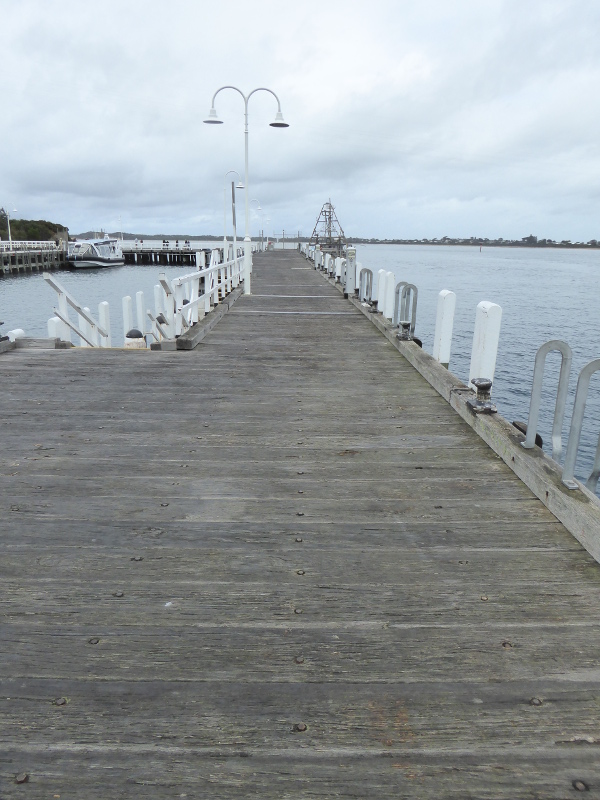 This section had the more classic wooden posts and piles. 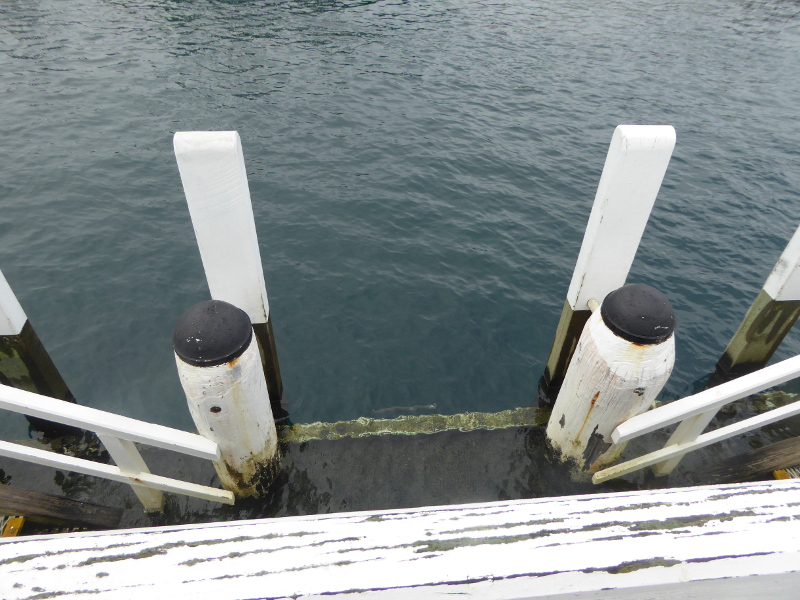 And the iron moorings which must surely have a few tales to tell if they could speak. 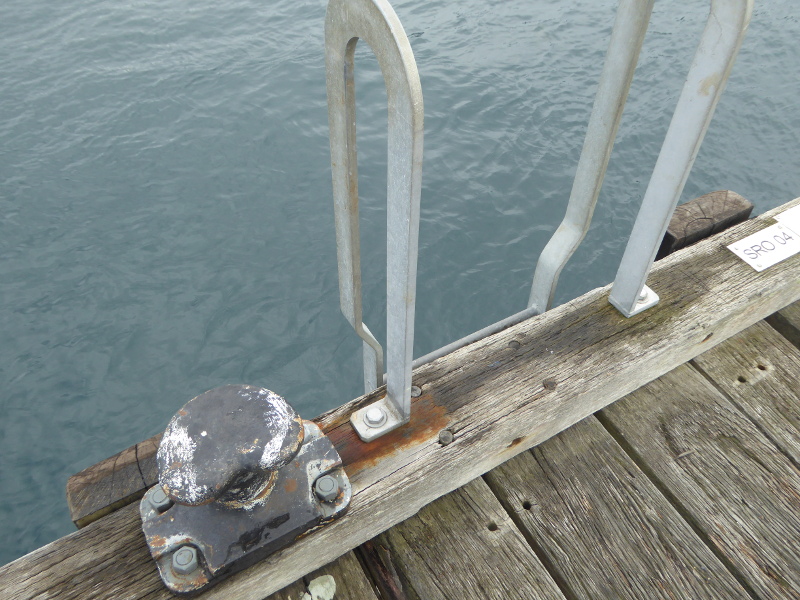 The lampposts along this part of the pier were attractive, too. They may well be a 1950s vintage, judging from my research done via Trove, but a nice contrast to the modern bridge that swoops across the channel to Phillip Island. 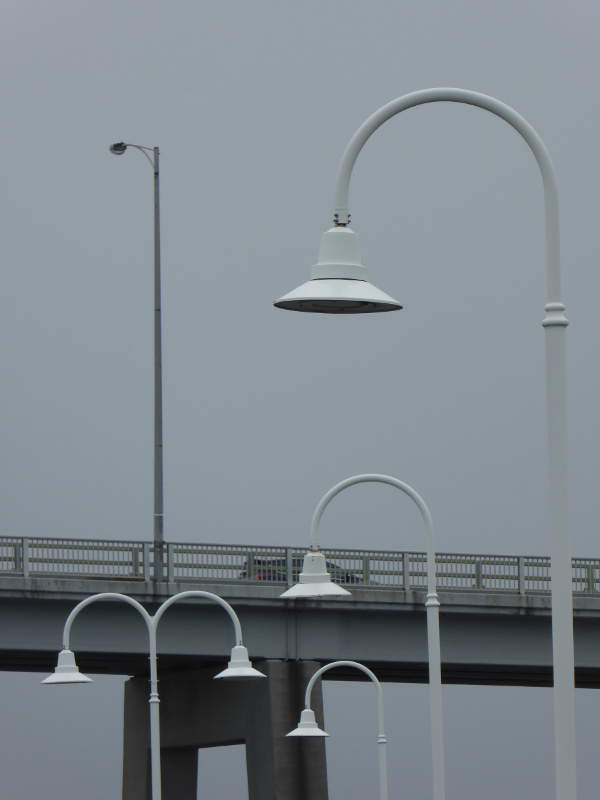 I’m not sure when this new bridge was built, but the first bridge connecting San Remo and Newhaven was opened not long after the start of WW2; before that there was a ferry across to the Newhaven Pier, now still visible through the space between the legs of today’s bridge. 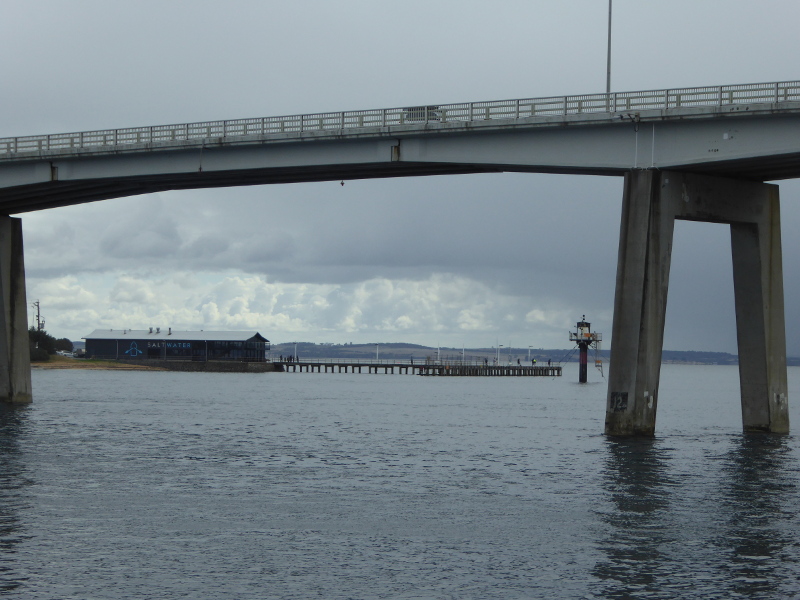 No ferries anymore here, but there are still little cruises, and as we walked to the end of the boardwalked section of the pier (about 200m, by the way), a small cruise arrived, spilling its passengers out onto this part of the pier, then loading up a new cohort keen for a spin round the Bay. 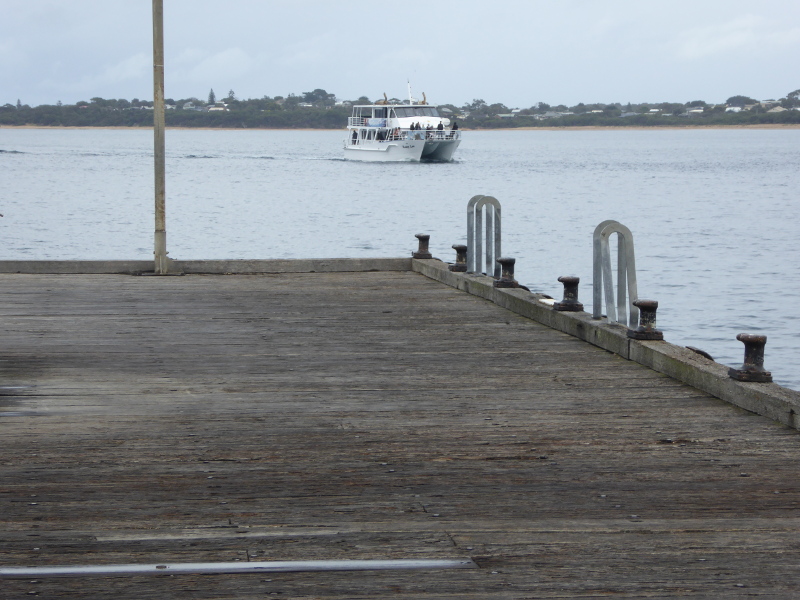 There are no benches on San Remo Pier, and no shelter if it does rain. So the handful of anglers going solo here have to stay on their feet the whole day. 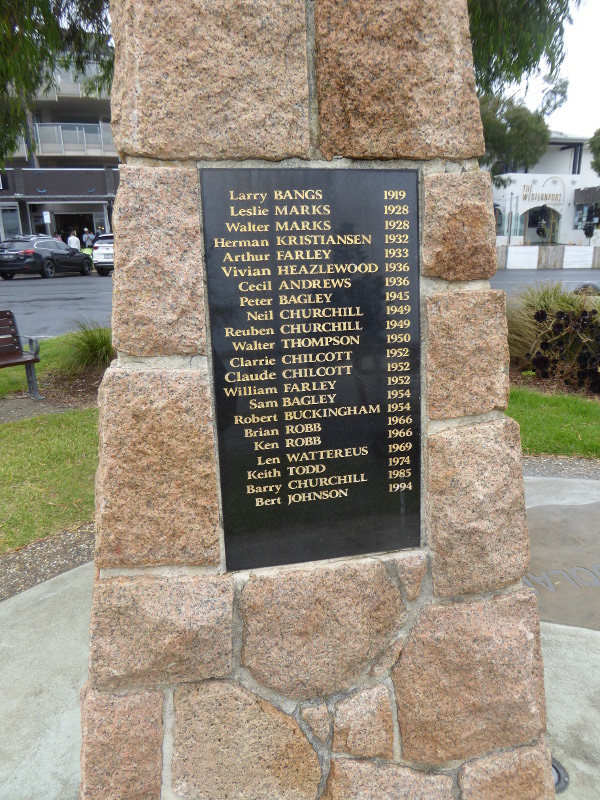 Back on shore and past the toilets is a memorial stone to the local fishermen who have lost their lives at San Remo – there are repeat names in a few cases, suggesting some families had several tragedies across the generations. 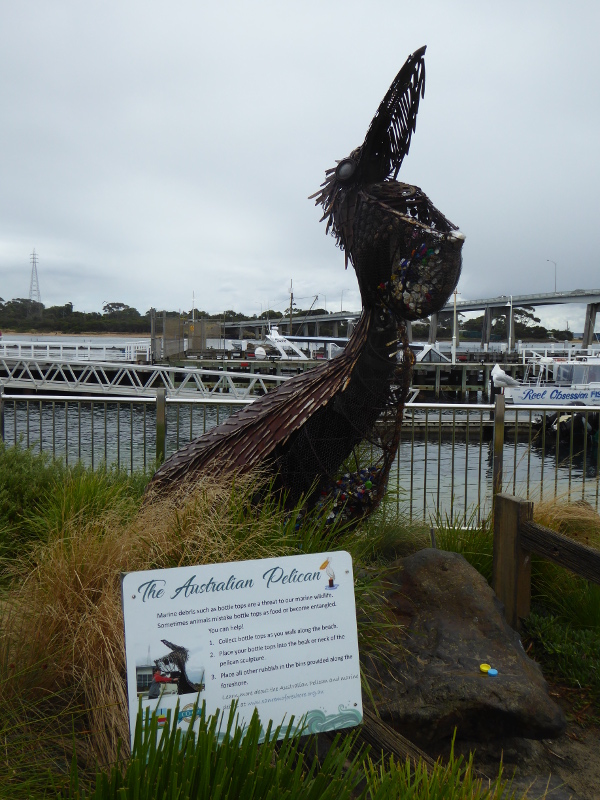 There is also a short coastal walk just above the beach (though for most of the path it is also possible to walk along the beach itself if the tide is out). We passed this pelican sculpture, designed to take on all the bottle tops and other waste found along the beach here.

Then the path winds its way along the coast, and you can see how the waters here gain speed through what they call the Narrows. No wonder so many people have lost their lives here over the decades.

No shelter or benches on the pier itself

Large parts of the pier closed at night. 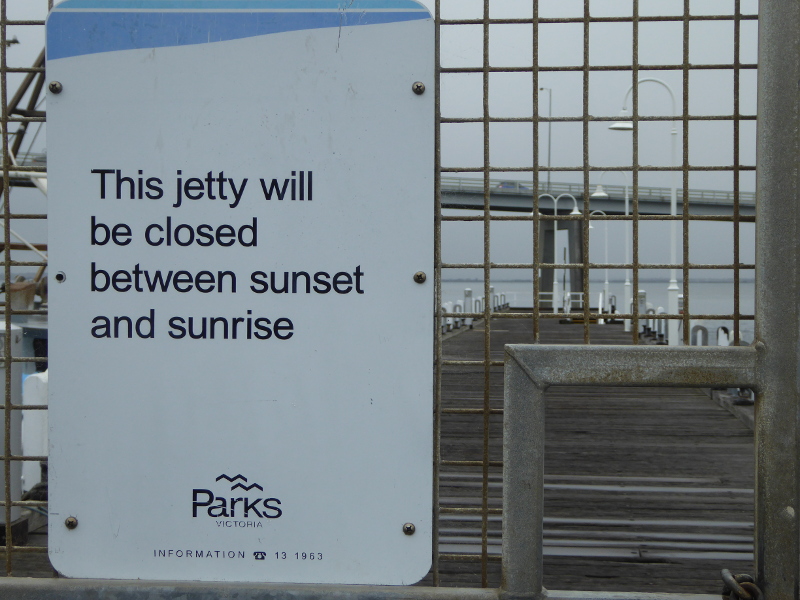 There were at least three jetties at San Remo in the 19th century, according to the information boards down by the coastline today. One certainly used to help load coal from the Kilcunda Mine, about 10 miles along the coast; another apparently led to the ladies’ bathing baths, about which I’d love to know more… 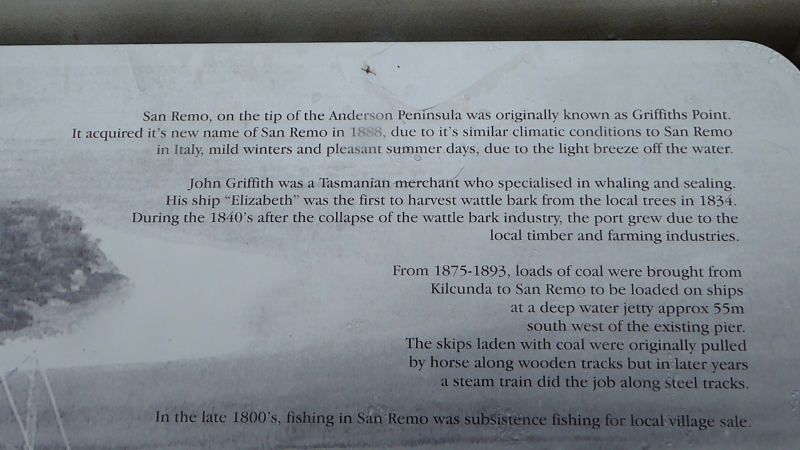 The earliest Trove article referring to San Remo Jetty dates from 1890, but the jetty was already in use by then, with a visiting ship carrying a party of government officials from Melbourne berthing alongside a boat taking coal from the Kilcunda Mine. Coal was being traded at 15 shillings a ton at the time.

November 1892 saw a fisherman drown just off the jetty. He had insufficient ballast in his boat and when he raised a sail, a squall overturned his boat. He began to swim for shore but never made it. Newspaper reports said the man, Horace William Frankish, was the son of a London solicitor, who had just sent 50 pounds to Australia for financial support. I wonder how long it took for tragic news to reach the father in London in those days? And I wonder if he was not in fact a ‘local’, as he does not appear in the list of those who have died doing their fishing work near the pier, the first of those dating from 1919…Not all incidents near the pier or jetty turned out so sadly, though…

The ss Genista was a well-known steamer round the piers in these parts. It was arriving at San Remo Jetty in July 1896, when a man who was travelling with his wife and kids had a dizzy spell and fell into the water. He was saved by a local, who put his smaller boat out from the pier, but although the man was unconscious and floating in the water, he didn’t apparently take in a single mouthful of water, and made a full recovery.

Strong winds broke the lines attaching the Genista to San Remo Pier in 1904; the boat washed up onto the sandy beach and had to wait till high tide to be floated off.

I love this 1900 photo of the Genista at the jetty.

Lucky Kenneth Earl was fishing in the channel near the pier in 1936, when his boat was swamped and sank. By the time he was rescued, he was lying face down in the water, but he responded well to life-saving treatment. I wonder how long he lived to tell the tale?

Reg Justice was a local man who for many years ran the ferry over to Newhaven. He got involved in several rescues during his time in San Remo. In 1936, a speedboat’s engine stopped just near the pier, and the boat was drifting out towards the ocean in the fast-flowing current, but Reg got his punt out and managed to overtake the drifting vessel and haul it back to the pier.

Around Christmas 1950, 2-year-old Stewart John was paddling in the shallow water near the pier when he got out of his depth. A 14-year-old by the name of John Stenning jumped in off the pier to rescue the toddler. I wonder if either of them are still around today?

The following year, over the holiday period, an estimated 2000 people lined the San Remo Pier to witness the blessing of the fishing fleet. The ceremony was quite informal, the Dean standing on an upturned fishing crate to conduct the service, while holidaymakers swam casually under the pier piles at the same time. (1956 photo also lining the pier)

1953 saw a campaign for lights to be installed on the pier, so maybe those attractive lamps lining one leg of the pier in 2021 date from shortly after that? Does anyone know for sure?

In 1954, two young local men went missing a few miles off San Remo Pier. (They are included in the list on the memorial in town still today). One of them is thought to have slipped into the water; being unable to swim, he needed help from the other lad, who put the engine in reverse and then dived in to try to save his friend, but they both must have gone under, leaving the abandoned boat spinning round in circles going backwards.

Pier rescues came thick and fast in the 50s. Taffy Evans slipped on greasy boards on the pier and fell into the swirling waters. He managed to grab hold of one of the pier piles and held on long enough for four others to rescue him. It looks as if Taffy Evans learnt enough from his experience to end up as a Ranger for the waters round here, a job he was still doing in 2008 judging by this article in which he is quoted. Is he still around to tell us more?

Other links and writings on San Remo Jetty

I didn’t find many links to other people writing about San Remo Jetty.

The Victorian Places website has a general history of San Remo, in which the jetty gets a mention.

I rather liked this Vic Pics photo taken from the bridge over to Phillip Island, giving a different perspective on San Remo Pier.

And this is a beautiful video taken by divers under San Remo pier just before COVID hit in 2020.

What are your stories and memories of San Remo Pier?

Has anyone got any stories to bring us up-to-date on San Remo Pier? The last Trove press clippings date from the 1950s, so there’s surely more stories to fill us in on in the last 60 years.

Are Stewart John or John Stenning still around to remember the rescue off the pier in 1950?

Is Taffy Evans still around to tell us more about his rescue off the pier?