A lot of vintage aspects of Sale Botanic Gardens were lost when the local golf club took over the space nearly 100 years ago. But new landscaping now is turning this into a lovely spot by the lake.

There isn’t much vintage left to Sale Botanic Gardens, but that seems to have been down to decades of neglect basically after World War One until 21st century enthusiasts breathed life back into the place. 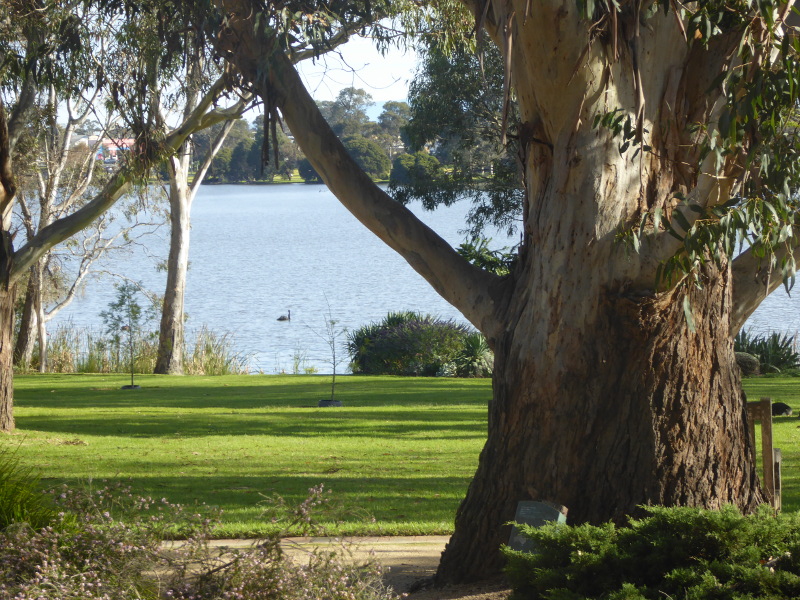 There’s still landscaping and new paths being built as I visited in winter 2021, so the place is changing before our very eyes. It’s a pleasant-enough place, sitting on the edge of the beautiful Lake Guthridge, and there were lots of excited kids charging around the play area, as well as a good number of people just strolling around on a bright but chilly morning. 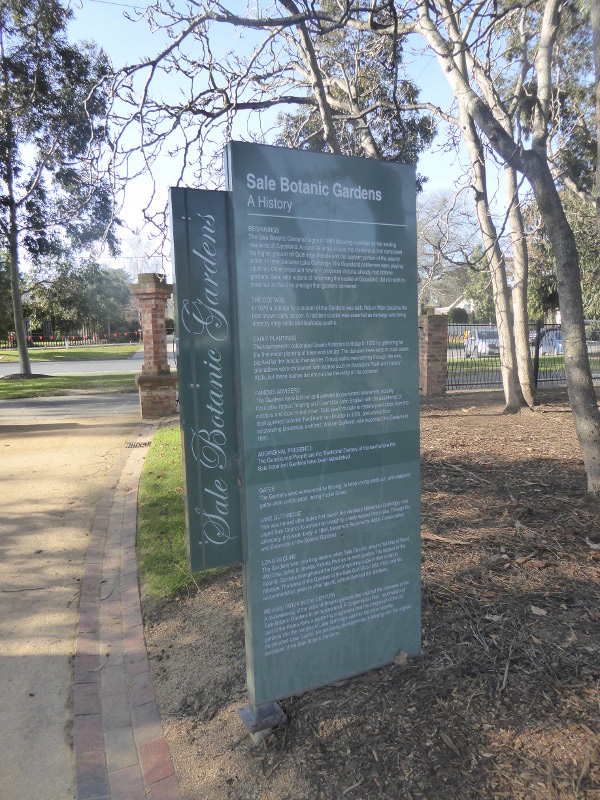 The information boards dotted around near some of the entrances tell us that there was once a curator’s cottage, and magnificent iron entrance gates. I’m guessing the brick posts marking the ways in along Foster Street might once have had those ironwork gates, but they are just empty spaces now. 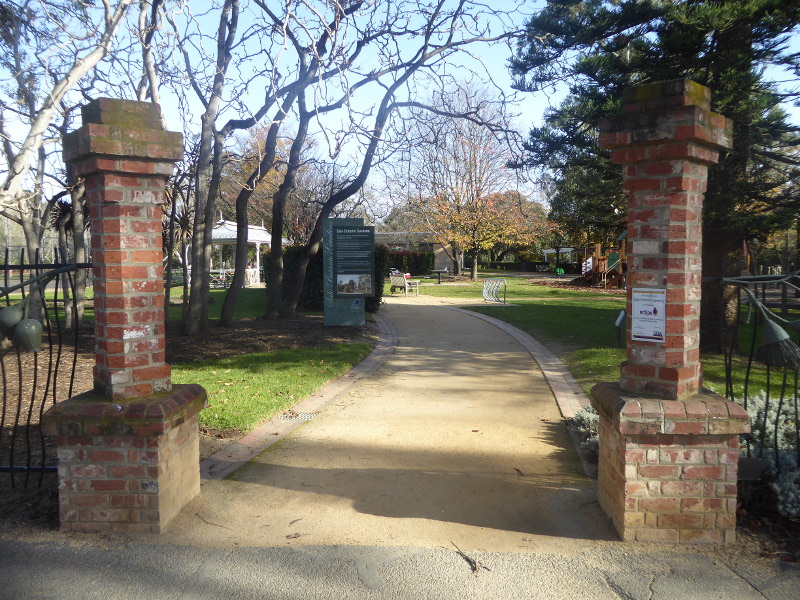 I’m not sure what vintage these lamps are, but they are attractive and they line many of the paths that take you round the botanic gardens in Sale. 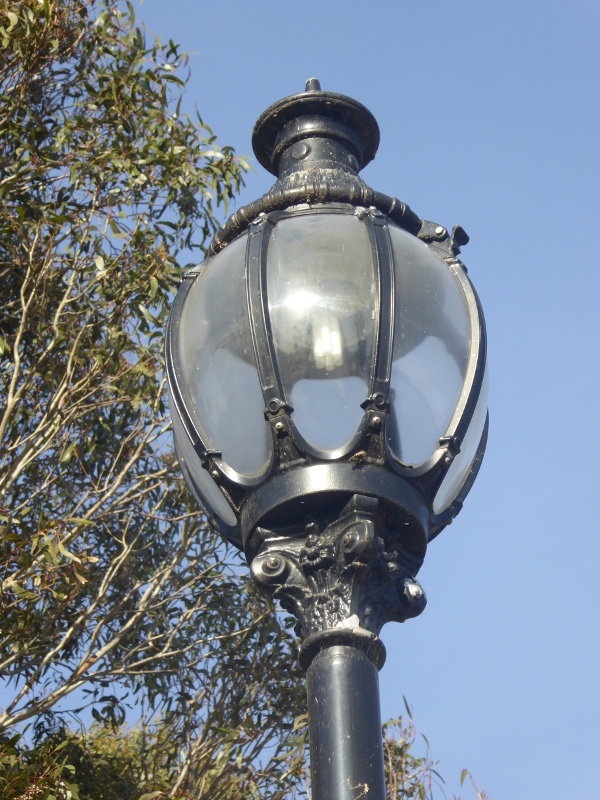 There’s also a vaguely vintage-looking barbecue area, under what might once have been a sort of pavilion, though I saw no signage to confirm that. 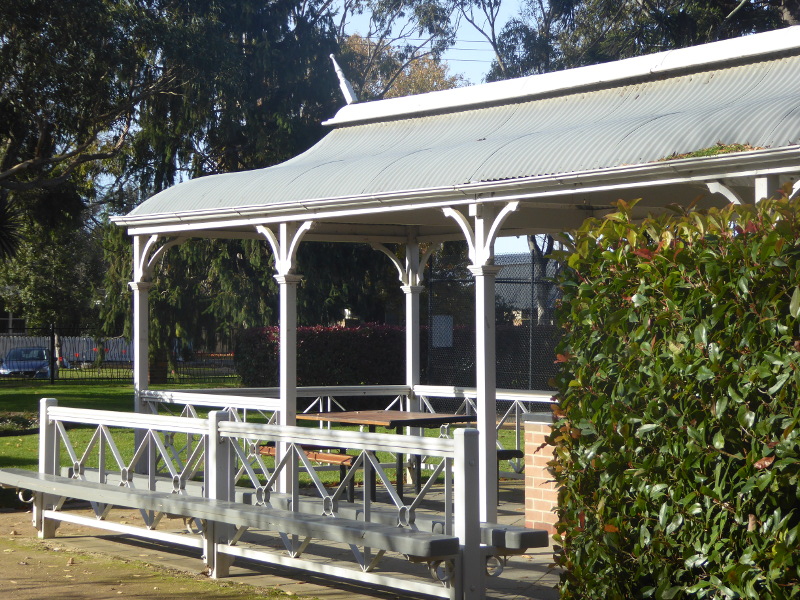 Some of the trees are clearly pretty ancient and may well date from the Gardens’ opening in 1860. I rather liked this cypress from Bhutan. 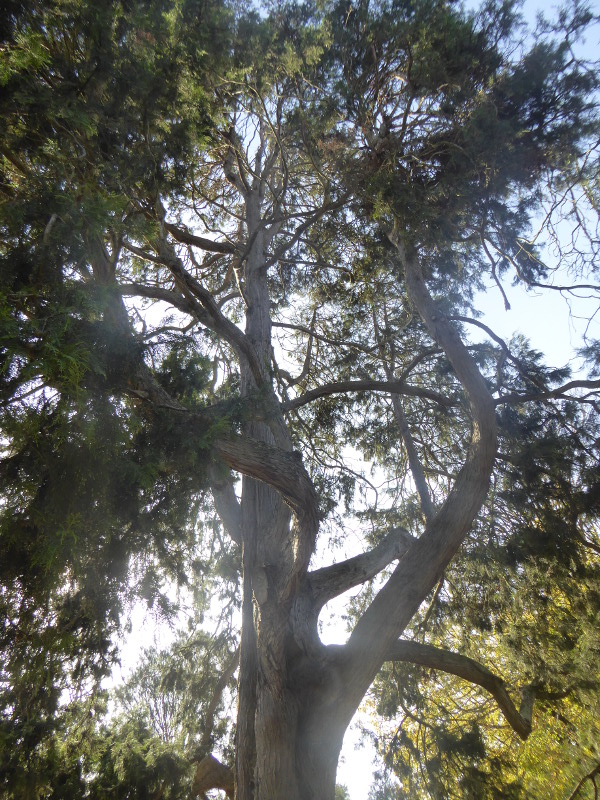 And I gather that there is an ‘elm forest’ indicated on one map of the gardens, though again there was no signage nearby to confirm this, and my recognition of elms has virtually disappeared along with their disappearance in Europe, so I can’t say for sure. 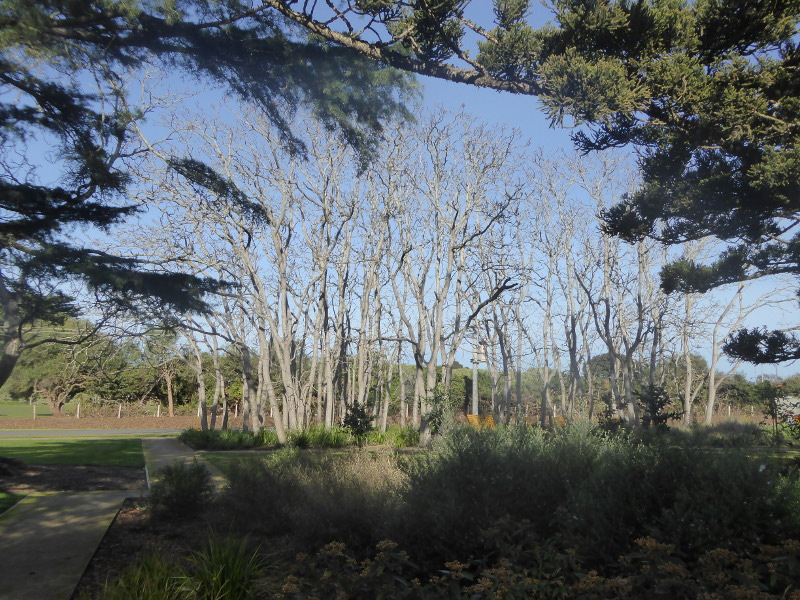 This also might be the ‘elm forest’, though it looked more like a petrified forest, unless it is just another deciduous tree type having its winter break? 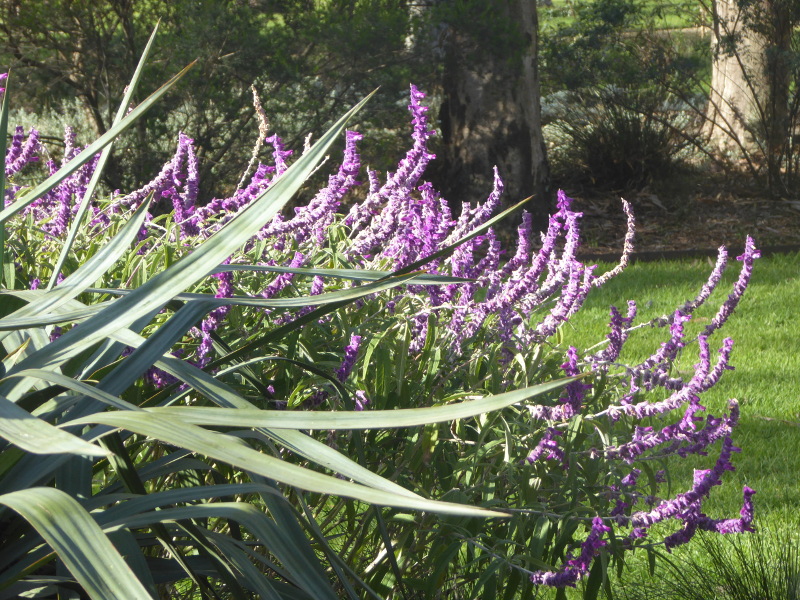 Purple seemed to be the colour of the season in the gardens for my visit. These purple hens I’d last seen by the lake up on the Puffing Billy Railway, were scratching around all over the Gardens. 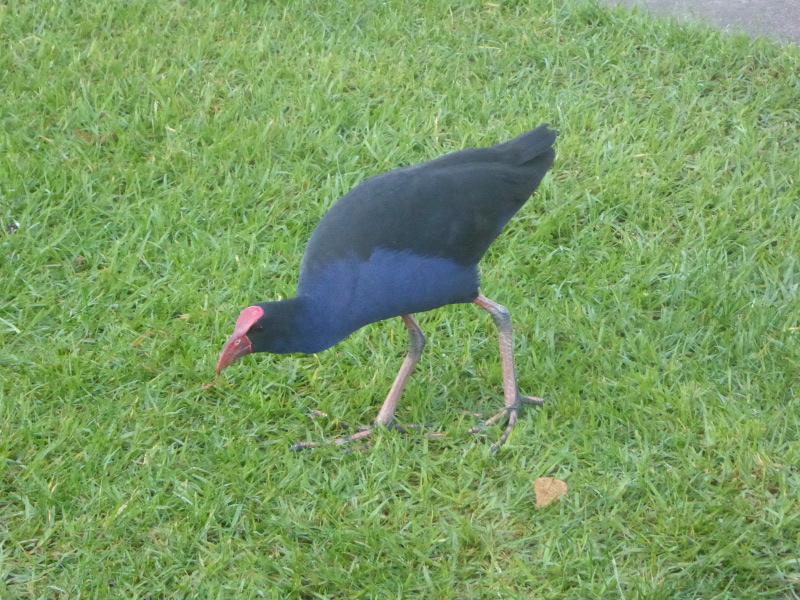 And the flowers in bloom in June also seemed predominantly purple. 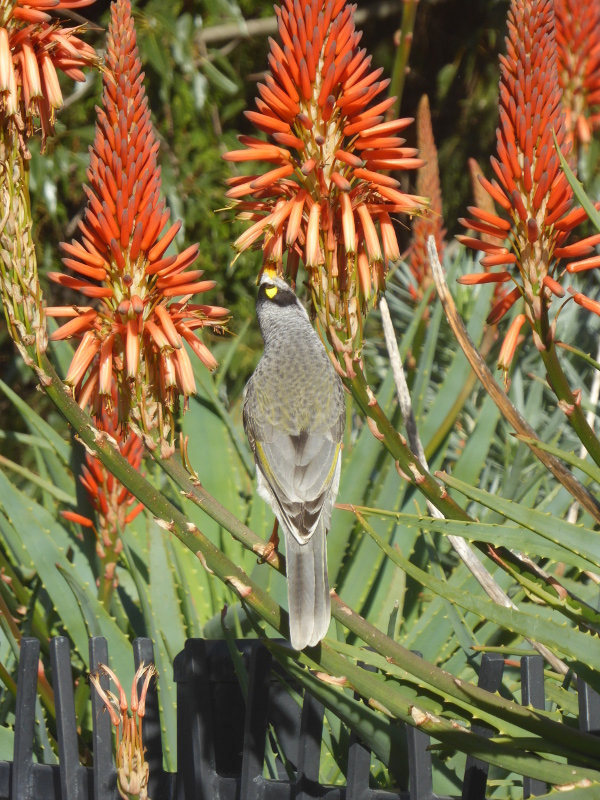 I did rather like the flash of orange here, though, as did the honey-eater, whose eye was also no doubt caught by the colour. 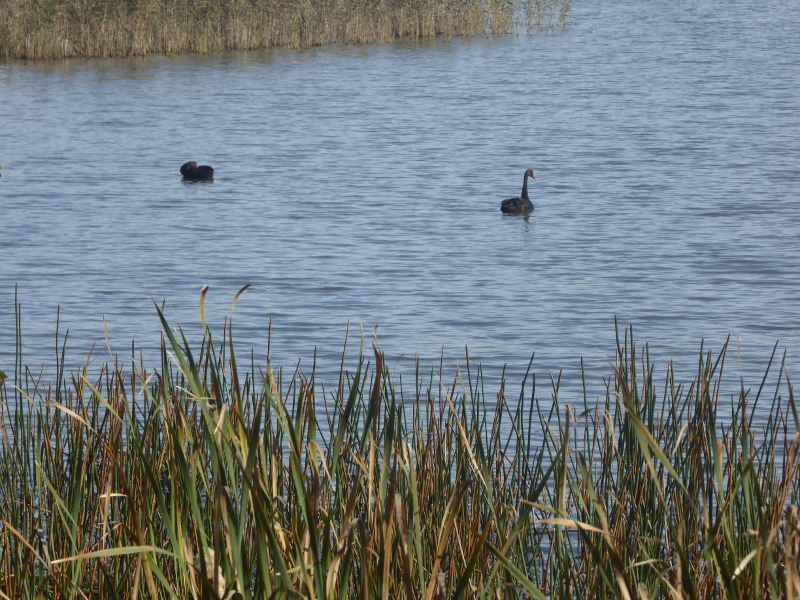 The Gardens’ position by the lake is really what brings them to life. There are lots of viewing points every hundred yards or so along the lakeside path, with nice perspectives back up into the Gardens themselves. 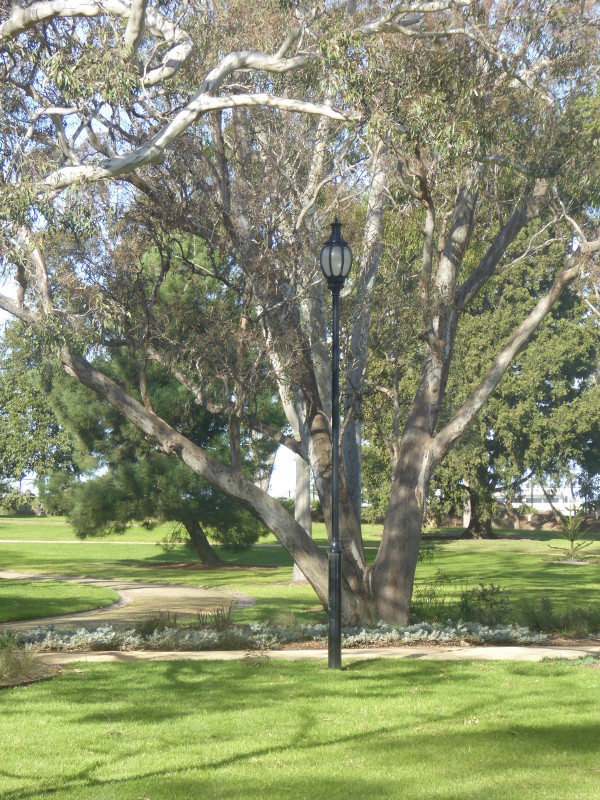 But this is still a work in progress. Bear in mind that for a good few years, the Gardens were in the hands of the local golf club, so presumably the whole area was part of a golf course, and we are lucky so many of the grand old trees survived at all.

I’ll have to come back at a livelier time of year, and maybe give the landscapers a while longer to get their ideas to bed in. I think Sale Botanic Gardens might be around for a while yet, and I’m just glad the locals saved them from those years of neglect.

I didn’t see any signs of closing times, and since there are no closable gates these days, I think the gardens are open 24/7.

Plenty of seating dotted around the garden, including these rather beach-looking sun loungers. 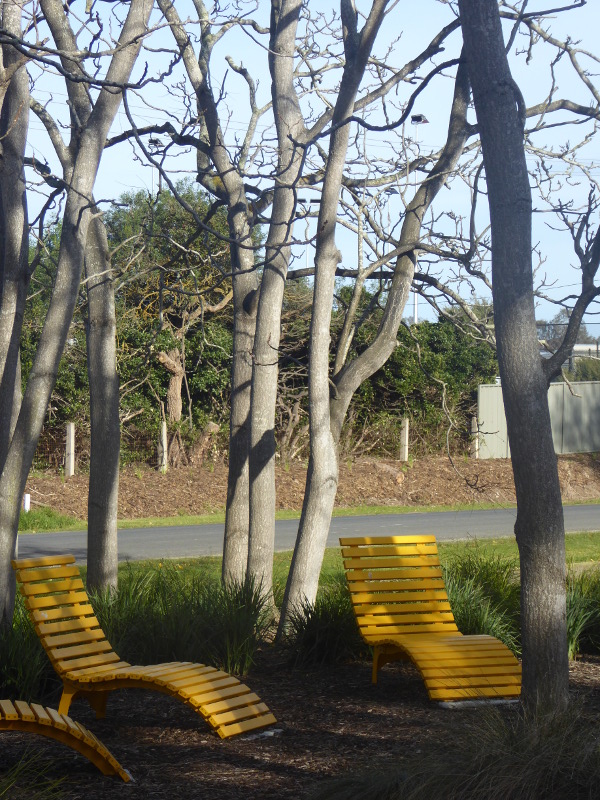 Toilets available in the Gardens.

Sale Botanic Gardens might have opened in 1860, but by November 1865, the local newspaper The Gippsland Times, was not happy at the state they were in. “The ground set apart for the purpose has hitherto contributed little to the enjoyment of the public, either in the way of utility or ornament.”

The article claimed that part of the gardens had vegetable beds growing produce for sale, and that on the rest of the land horses were allowed to graze, at a cost for each week, meaning the only person gaining from the gardens was the man employed to look after them! There are so few trees, said the leading article, that they are barely visible among the rows of cabbages!

The same article longed for a space ‘adapted to the daily promenade of ladies and children in search of exercise and health,’ with, occasionally a band playing music. The more educational and scientific task of nurturing new plants could be left to the Melbourne Gardens’ botanist, the newspaper believed. 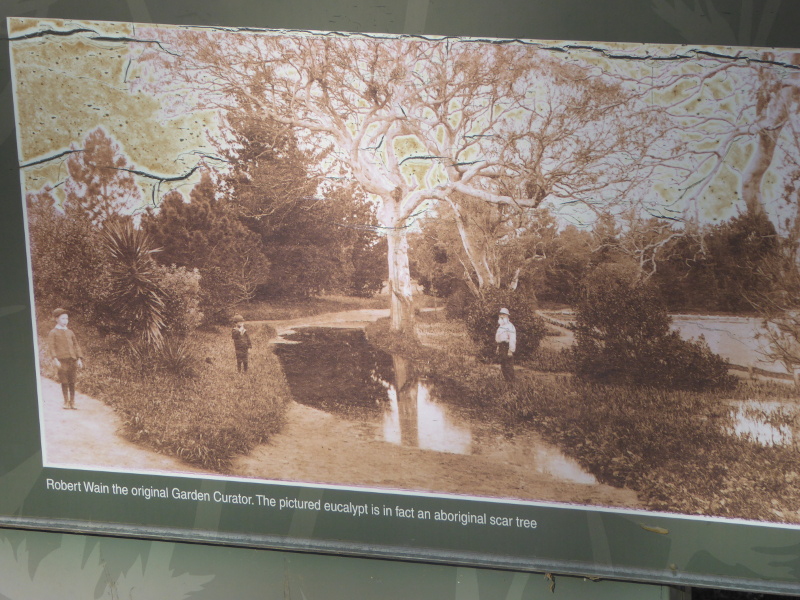 Some things had moved forward by 1867, as the local ‘Acclimatisation Society’ announced it would be donating 3 deer and some sparrows to the Botanic Gardens. No sign of the deer now, but the sparrows seemed to acclimatise well enough.

There were few articles referring to the Gardens over the following years, but by 1890, thanks was given to the Walhalla Mountaineer Brass Band for playing music in the Botanic Gardens, so things were happening there by then.

The biggest drama reported in Sale Botanic Gardens’ early years was the capture of a carpet snake by the curator’s dog in September 1915. The curator finished off the snake with a blow from his hedge shears.

The Gippsland Times was back making editorial comment on the Gardens in October 1916, though. The change of head gardener in the previous 12 months met with the newspaper’s approval, the new man making the place finally one in which local residents could find pride and pleasure. Instead of beds full of weeds, there was now a pleasant mix of colours and fragrances, making a stroll through the gardens a pleasure.

An ‘Old Resident’ wrote to the Gippsland Times in August 1917 to protest at the removal of 180 pine trees from the Gardens he loved, gardens which he was old enough to remember opening (57 years earlier). He suggested instead of removing timber (presumably for war needs), a tree should be planted for every soldier lost from Sale, with name and particulars on a memorial plaque by each tree.

Not long after the end of the First World War, the land on which the Gardens stood was leased out to the local golf club. One correspondent to the Gippsland Times and to Melbourne papers in 1937 continued to protest, complaining that the land, which had been reserved for public use was now inaccessible to the public as the golf club did not allow non-members to enter. Nothing came of his protests, I think. Indeed, the Gippsland Times was running headlines by 1939 talking of how ‘virile’ the golf club was…

What are your experiences at Sale Botanic Gardens?

Does anyone just have a good memory they’d like to share about a visit to Sale Botanic Gardens, even if it was just to play a round of golf during the period the gold club ran things here?

Does anybody know where the ‘magnificent’ ironwork entrance gates were, and better still, has anyone got an old photo?

Does anyone know what year the structure over today’s barbecues was built, and what it was once used for – there’s so much potential signage missing in Sale Botanic Gardens?

Can anyone fill in with any stories about things that happened in or around Botanic Gardens to bring my history section beyond my last story from the Trove database, which is unusually early for Sale, bring from 1939?

Other links and writings on the Sale Botanic Gardens

This is the local council’s page on the Sale Botanic Gardens.

The Melbourne Playgrounds entry focuses, unsurprisingly, on the playgrounds in Sale Botanic Gardens.

The local paper, the Gippsland Times, reported in January 2021 on the grant from the State Government to improve the Gardens.

This YouTube video takes a short tour of the Gardens in April 2021.