In the 1950s two ocean liners ran aground near Rosebud Pier. After a rebuild in the last 10 years, this is a popular spot for fishing in 2019.

We hadn’t actually planned our trip to Rosebud Pier, having already visited Dromana Pier – just up the Bay – in the morning on the way to what we had thought would be a lighthouse visit to Cape Schanck, but on finding the lighthouse closed that Sunday, we opted for a second pier walk back at Rosebud.

Rosebud has changed quite a bit since the first jetty was built here in the 1880s. The official population of this tiny fishing village back then was 90. And on this sunny Sunday in June, there were almost that many people fishing off the end of Rosebud Pier, in complete contrast to its neighbour Dromana. 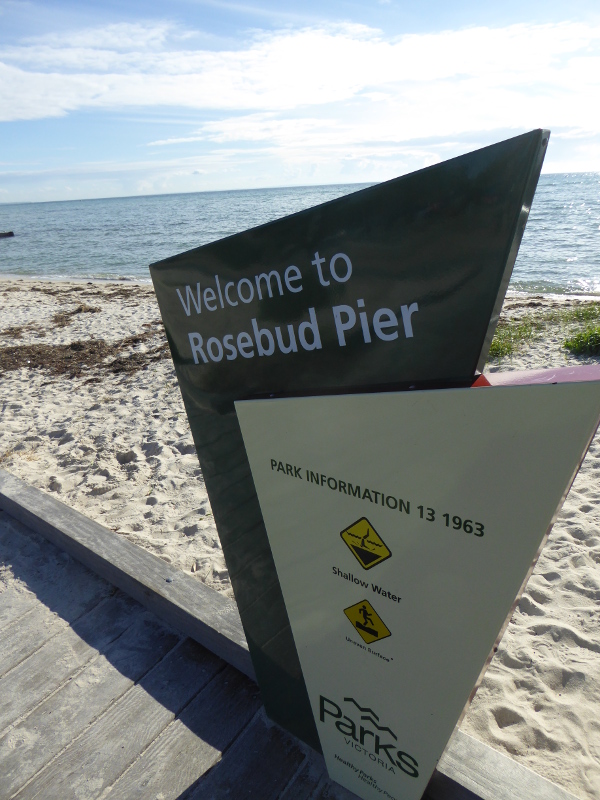 Rosebud in 2019, by the way, is now the second largest town on the Mornington Peninsula, so it really has moved on from those early days of the pier or jetty. And it has seen quite a bit of modern development in recent years, with a kiddies play area just by the shore end of the pier, cycle paths racing past along the front; even some modern sculpture, which I quite liked actually, though it sounds from local press reports as though they caused a bit of controversy when put up a couple of years ago. 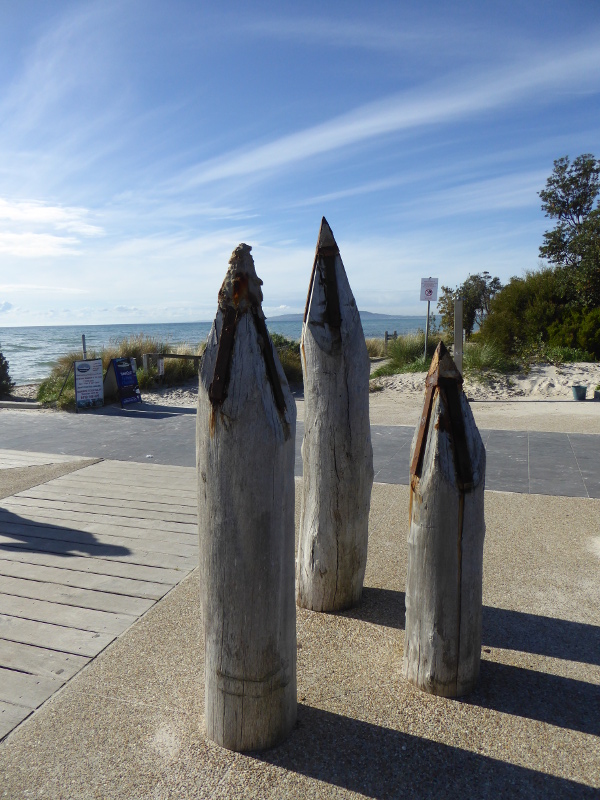 The pier as we see it today has been completely rebuilt, but thankfully still with lots of timber and most importantly for me a boardwalk through which you can try to spot the water as you walk along the planks. The sculpture, I gather, comes from parts of the vintage pier of 1940, which was replaced in the last ten years. 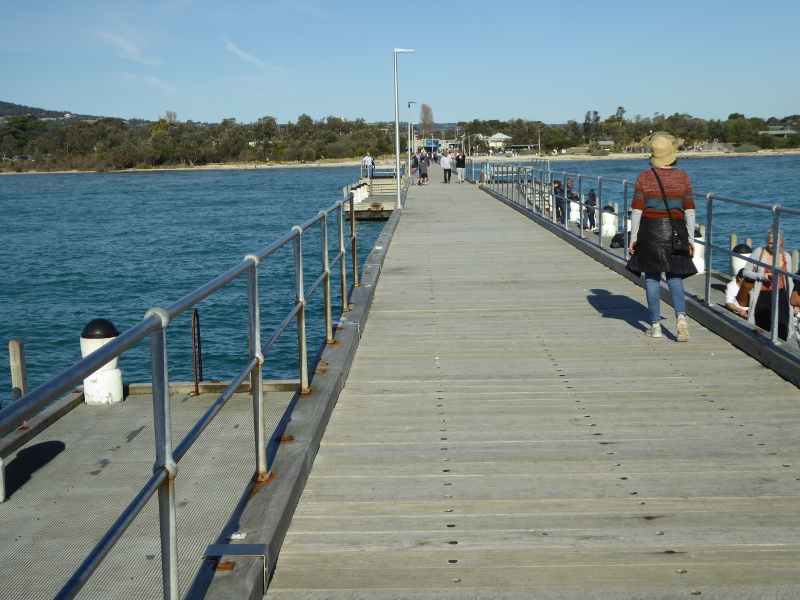 Rosebud Pier today is about 300m long, so it stretches out into the Bay quite some way, and I’m told ends up quite near the shipping channel, hence the heavy duty mooring posts that lined up towards the end reminding me of the rather odd series of adverts we had on UK TV in the 1970s for baking flour, which for some reason involved a bunch of men in black suits and bowler hats… 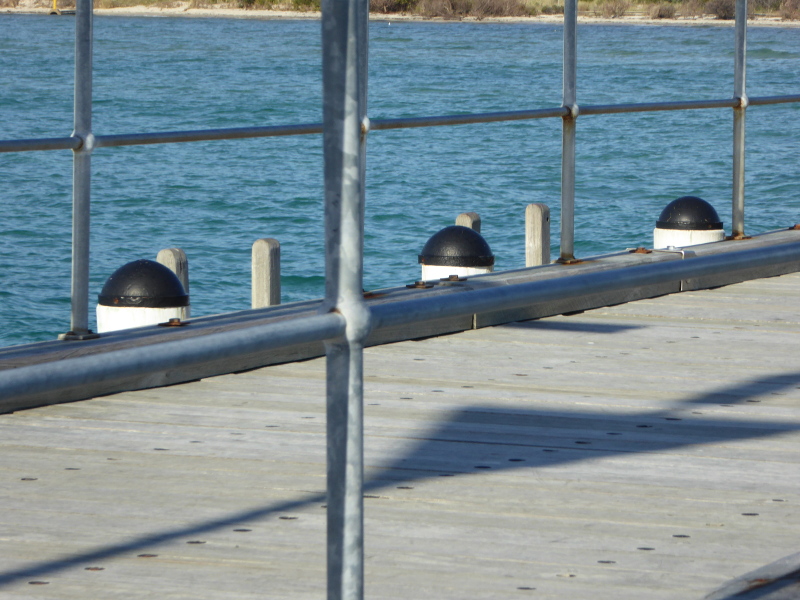 Anyway, the length of the pier today suggests that if there was a repeat of the 1950s liners running aground near here (see history below), the ships would be quite a bit closer to the pier than they were back then.

It’s another of those piers with the fence running along the southern edge but a shallow wooden block only to stop you sliding into the water to the north. They look nicer with less fencing but I do sometimes wonder at the idea behind this low level guard… 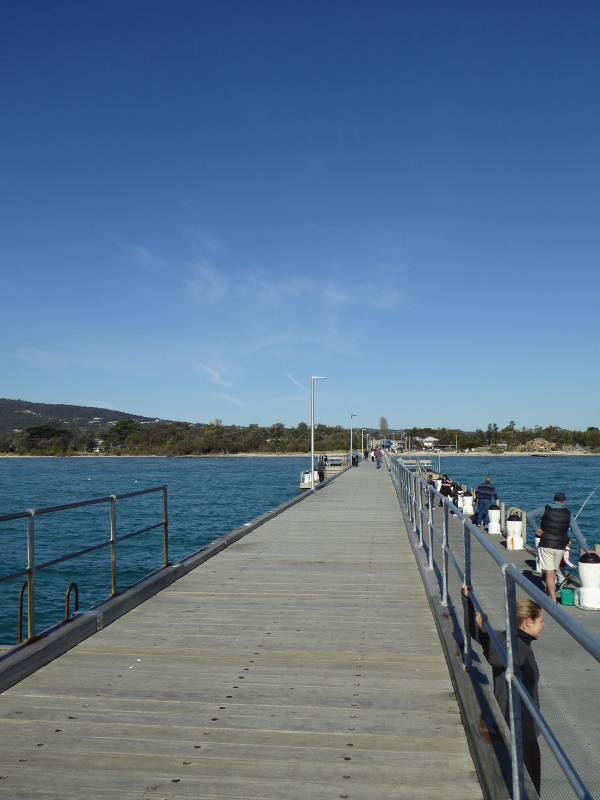 Because this was a 2009-2015 rebuild, we have lost any vintage lamps that may have lined the old pier here. There is lighting on Rosebud Pier to help the twilight fishermen, but there’s nothing vintage about the lamps there today. 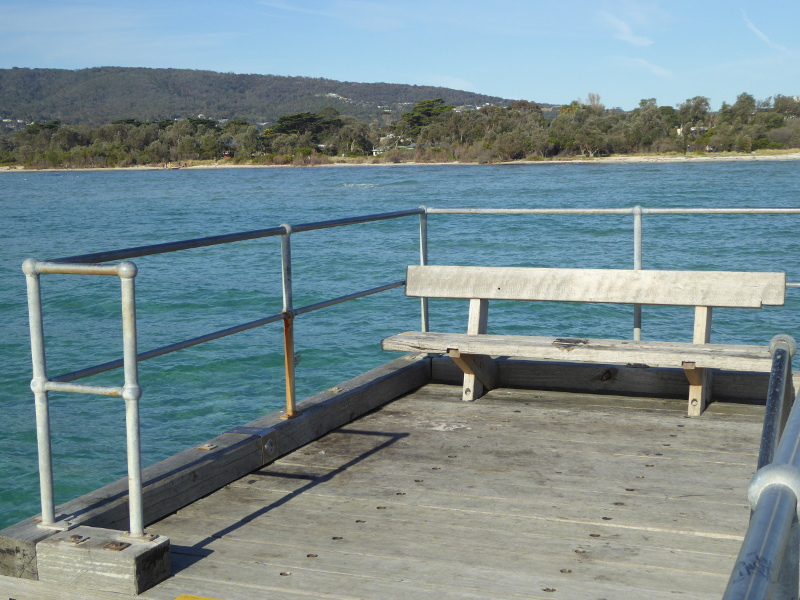 The bench on the pier was also in a lovely spot in a cross section of the pier half way between the shore and the pier end. There isn’t much fishing going on here, so it is genuinely used as a resting place for people promenading on the pier rather than a storage spot for fishermen, as many pier benches seem to be. And it was rather nice to see that the bench was made by the Men’s Shed in Frankston North (though I had to peer in closely to be able to read that). 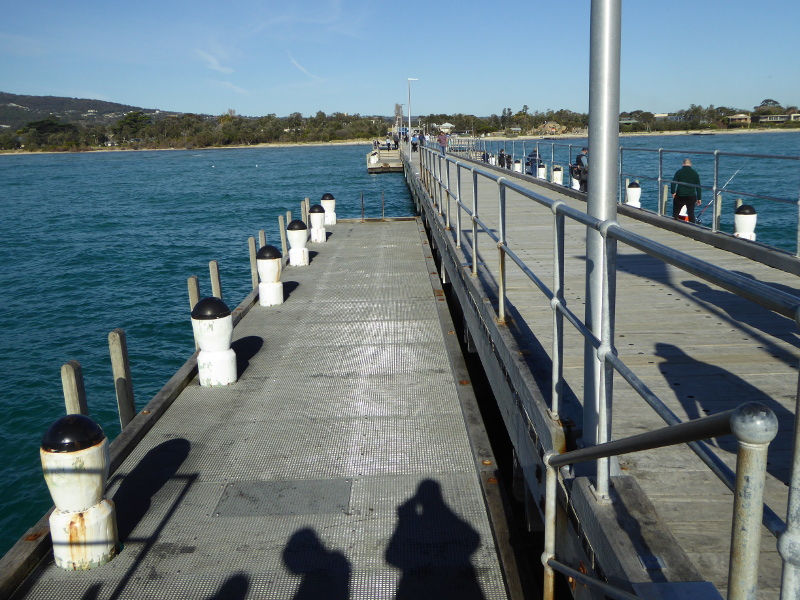 There were a fair few groups walking along the pier: young folk taking the sun; an old lady with a bag; a granddad – maybe even great granddad – out for a walk with a youngster; old eccentric-looking couples; and another older lady who was stopping at hundred metres or so along the way to take in the air and enjoy the winter sun on her face. There was even a cyclist who rode down to the end of took in the views. 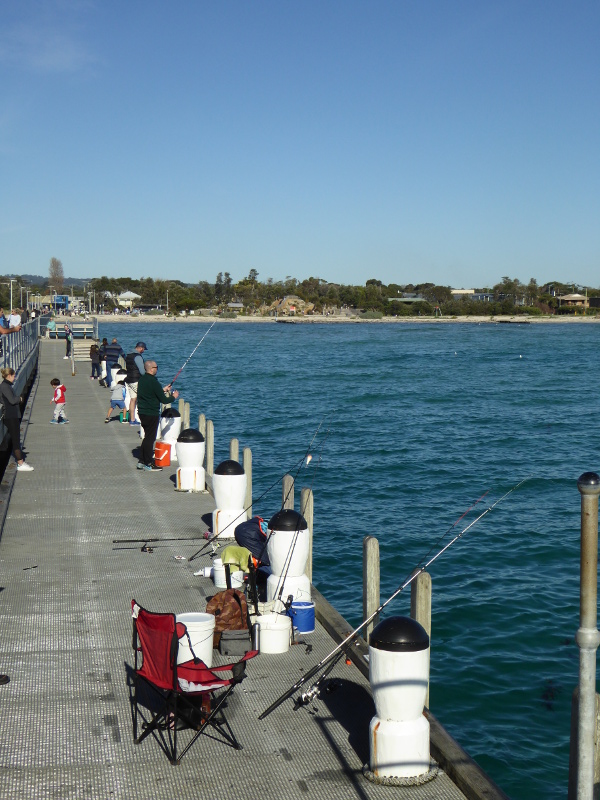 But Rosebud Pier, down the far end and off to the side on the lower platform, was a busy hub of fishing activity. I was interested to find links to websites encouraging kids to get into fishing and for some reason Rosebud Pier seems to be a suggested starting point for budding fishermen (and women).

We spotted a whole bunch of kids around age 12 or 13 looking pretty skilled at launching their line and pulling things in. A couple of sisters looked a bit bored, but some of the girls were also getting in on the act, so the future of fishing may be female as well as male by the looks of Rosebud.

There are fewer colourful beach huts near Rosebud, but the great thing about the coastline here, especially considering it is such a busy resort these days, is how little it has been covered in luxury flats. There is some housing dotted along the shore, but there is mostly greenery, unlike sections of the coastline further up the Bay. Long may it continue.

We didn’t see much wildlife on or around Rosebud Pier. A big white jellyfish confirmed my sense that Port Phillip Bay is home to hundreds of these weird looking ocean beasts, and the birds having a bath down near the beach intrigued us. Not gulls, but what kind of sea birds are they? 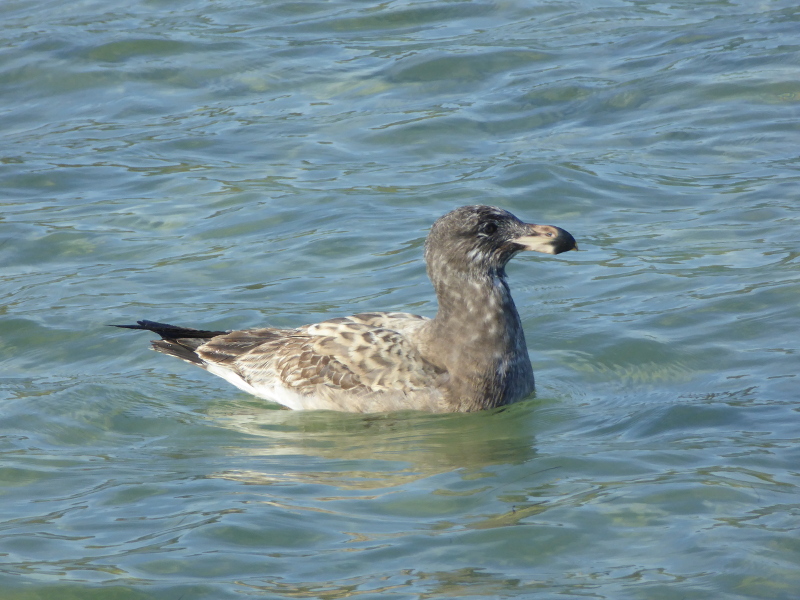 And the best thing about visiting Rosebud Pier on a winter’s afternoon was the light, with that sun  so low in the sky over the bay sending long shadows reaching back up the pier towards the shore. 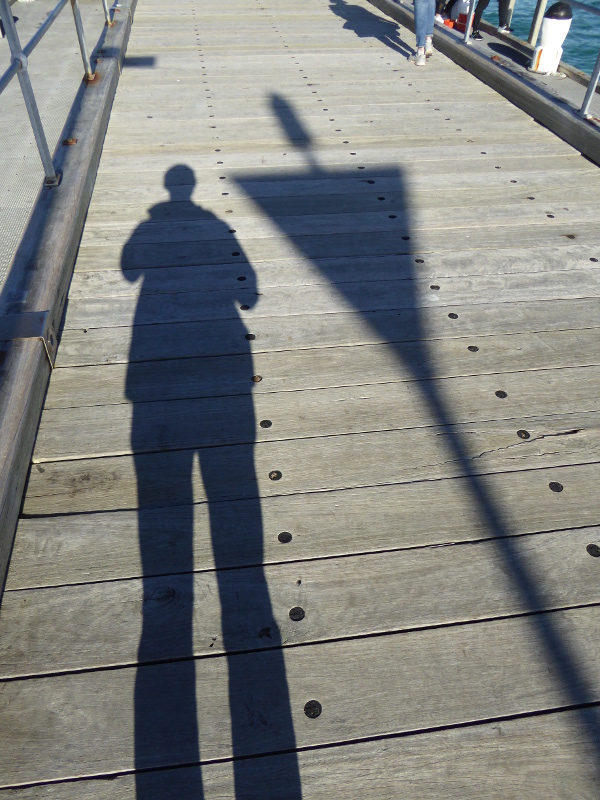 Benches but no shelter if it rains

Toilets back on the reserve on shore

Fishing charters leave from Rosebud Pier and Rye Pier, which we are also yet to visit. 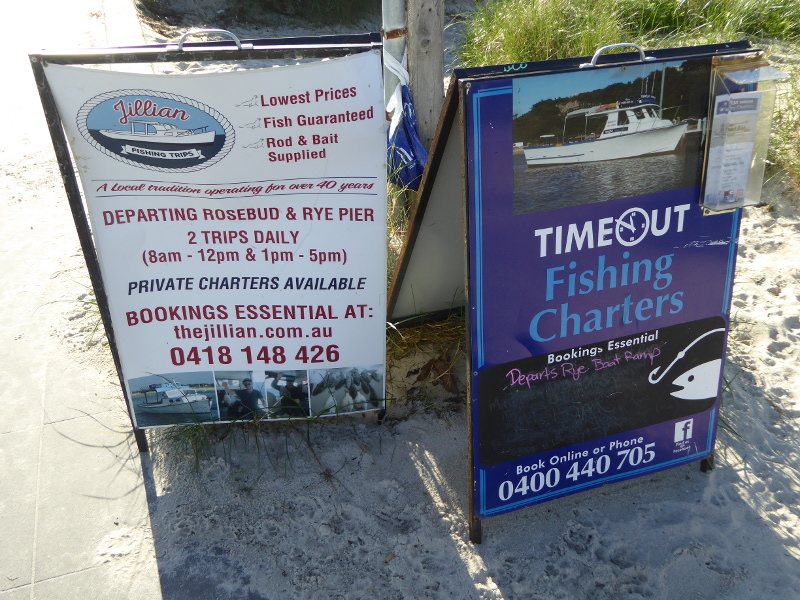 History and stories about Rosebud Pier

I’m not sure when the first pier at Rosebud was built but it looks as though it was some time in the late 1880s.

In June 1887, The Age carried a report on the ‘wharves and jetties of the Bay’, in which Rosebud got a mention, as a busy fishing village with no landing place: “Each member of the party had to be carried to the shore on the backs of sailors”. But then later in the same month, there was talk of adding a boat jetty to ‘Rosebud Pier’, so maybe some sort of structure was in place earlier?

By 1889, there was definitely a jetty at Rosebud, because news clippings spoke of adding a new green light at the end of the Jetty, which would be visible over two miles out in the bay, and would differentiate Rosebud from Rye Jetty (soon also to be reviewed by Vintage Victoria as Rye Pier), which would have a red light.

That didn’t stop the confusion some ship navigators felt in the Bay, with one boat running aground in 1904 after a captain mixed up the green Rosebud light with another green buoy elsewhere in the Bay, and a collision between two vessels in 1906 when an officer giving evidence in court some weeks later still wasn’t sure which jetty had the green light and which the red!

There were various campaigns to lengthen the jetty/pier over the years. One in 1912, another in 1927. During the local debate in the 1920s, the Government was all in favour of lengthening the structure into deeper waters if it was to be used for commerce and trade, but not just for pleasure boats and promenades (a very different tone from the discussions around St Kilda at the same time).

Rosebud Pier had its own catalogue of dramas. In 1925 a teenage boy dived from the pier into less than 50cm of water and broke his neck in the process – in front of crowds of holidaymakers in January. In 1944, two girls canoeing near the pier were dragged out into the bay and capsized – this had a happier ending as they were rescued by a man who rowed out to drag them from the water.

A new pier was built at Rosebud in 1940, and this one gets a mention on the Victorian Heritage Database, though it also looks as if that has now been replaced after renovation work done in the last ten years. I think timber from the 1940 pier has been used for the sculpture at the shore end of the current Rosebud Pier. I rather liked it, though apparently it has provoked some controversy, according to some press reports.

There were not too many news stories among the press clippings on Trove, but in 1952, a ship heading for London with over 1200 passengers on board ran aground just off Rosebud Pier. According to press reports the next day, the whole of Rosebud stopped work and people lined the beach and pier to watch the stranded ship. After 18 hours, and with the help of four tugs and a minesweeper, the ship got back on its way, much to the relief of some of the VIPs on board, which included members of the International Olympic Committee heading north for the Helsinki Games.

I loved the reports of 3000 ‘spectators’ on shore to watch the incident: one set up a canvas and easel to paint the scene, several had telescopes out, and for many it became an opportunity for an entertaining picnic on the beach. The Argus spoke of “fishermen shoulder to shoulder with fur-coated socialites who had seen their friends off on the liner the previous evening.”

Amazingly, as if lessons hadn’t been learnt from that embarrassment, another liner from the same Orient company ran aground in a near replica incident off the pier just four years later. This time it took 12 hours and three tugs to shift her. But it just shows the dangers of the squalls and tides getting into and out of the Bay, even some way from the infamous Rip at the mouth of the entrance.

Other links and writings on Rosebud Pier

This 2015 Mornington Peninsula News piece tells the story of the 2015 rebuild of Rosebud Pier and the people who helped get it back open again.

The Victorian Heritage Council entry on Rosebud Pier suggests that the 1940 pier was in a slightly different location from the current pier.

This drone footage of Rosebud Pier on YouTube has some great angles on the pier, but it was at a much lower tide than for our visit.

Blogger Gemma had a winter walk on Rosebud Pier.

And the Bayside News website gets a mention for this quirky picture of Shrek with a young local girl on Rosebud Pier in 2017.

What are your stories and memories of Rosebud Pier?

Does anybody remember the big liners that ran aground near Rosebud Pier? Were you on the beach watching? What can you remember of that day?

Is the current Rosebud Pier very different from its predecessors, especially the one built in 1940, which might still be in the memories of readers today?

Or do you just have good memories of a romantic stroll, a fishing trip, or maybe a holiday visit that involved a visit to the pier?

We were here at the wrong time of day to pick up a coffee in Rosebud. We’ll be back, but in the meantime, if you are a local, what’s your idea of the best coffee shop near Rosebud Pier?

One thought on “Rosebud Pier”