The Queenscliff White Lighthouse has been watching over passing ships since 1862, with pilots and navigators lining it up with the Black Lighthouse on the hill for entry into Port Phillip Bay

The White Lighthouse at Queenscliff sits on the southern side of the headland called Shortlands Bluff. It’s also known as Queenscliff Low Lighthouse, both names designed to distinguish it from its partner up on the top of the hill, the rather unique Queenscliff Black Lighthouse. 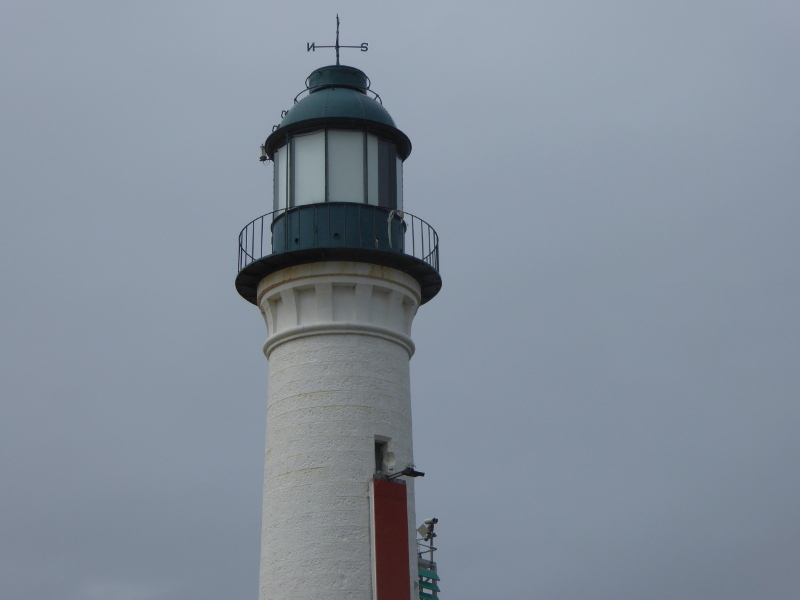 With its white paintwork, red panelling up the side, small windows in the walls presumably following a spiral staircase up to the top, and its weathervane on top of the light tower itself, the Queenscliff White Lighthouse looks like the classic 19th century structure, and that’s because it is yet another lighthouse in Victoria built to the UK design (even with original door up above tidal level, even though nowhere near the tide marks), with fittings from Chance Brothers in Birmingham. 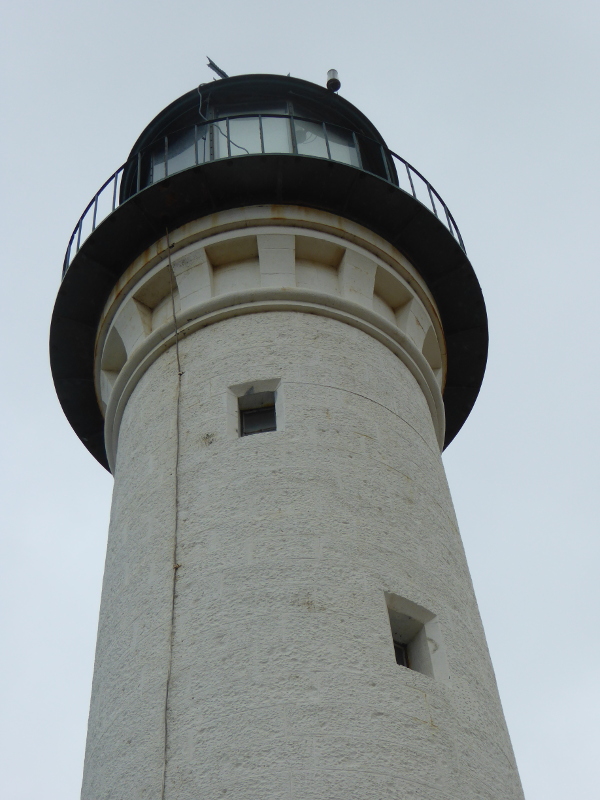 The shame about the white lighthouse today is that it is all fenced off, so when you get down to that foreshore hoping for a closer look, you won’t get very close, and you’ll have to poke your nose through the mesh wire fence to get a decent close-range shot. 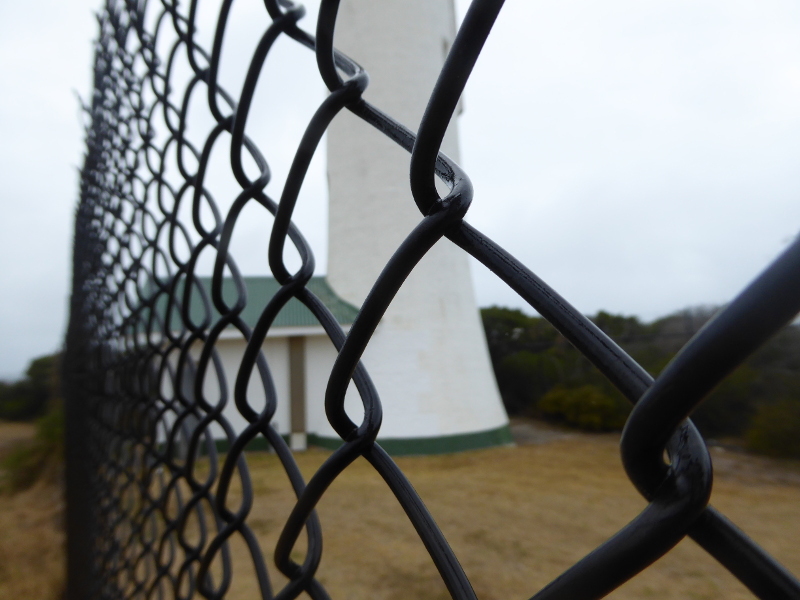 Nearby, on the coastal path, there is a memorial plaque for the Queenscliff Pilots service and crews. It’s a tribute to those who gave the ultimate sacrifice to help struggling ships off the coast here, and there are engravings of the various lifeboats that have been used since the service began in 1839. 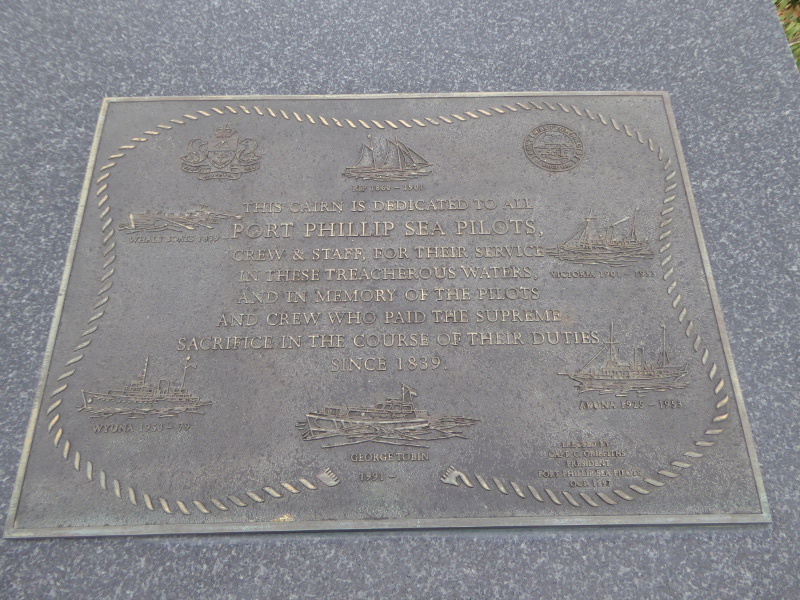 Basically, in those pre-lighthouse days, they had rowing boats also used for whaling, which conjures up images from my youth of Grace Darling and her daring deeds off the north east coast of England. But there is an odd gap in the years they cover on this memorial, so if anyone can help out with information on what happened between 1979 and 1991, I’d love to know… 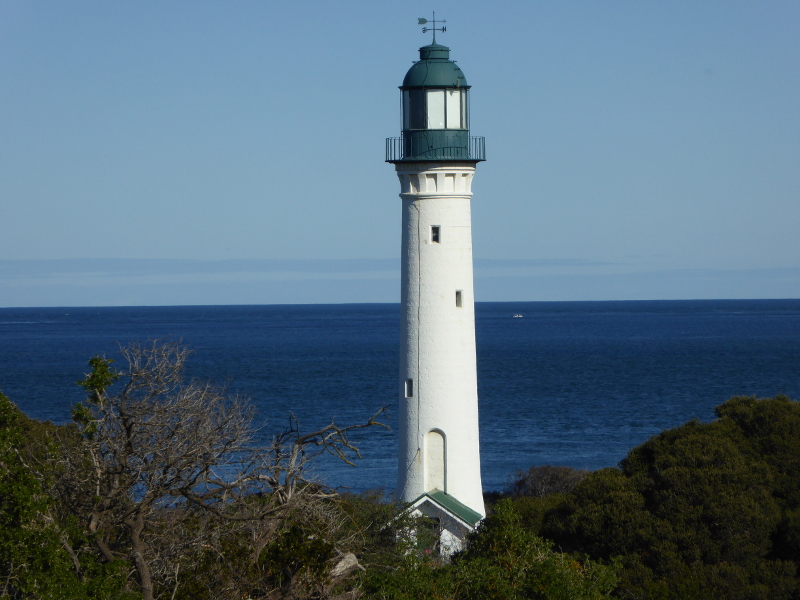 There are nicer views of the White Lighthouse actually from further away in Queenscliff. 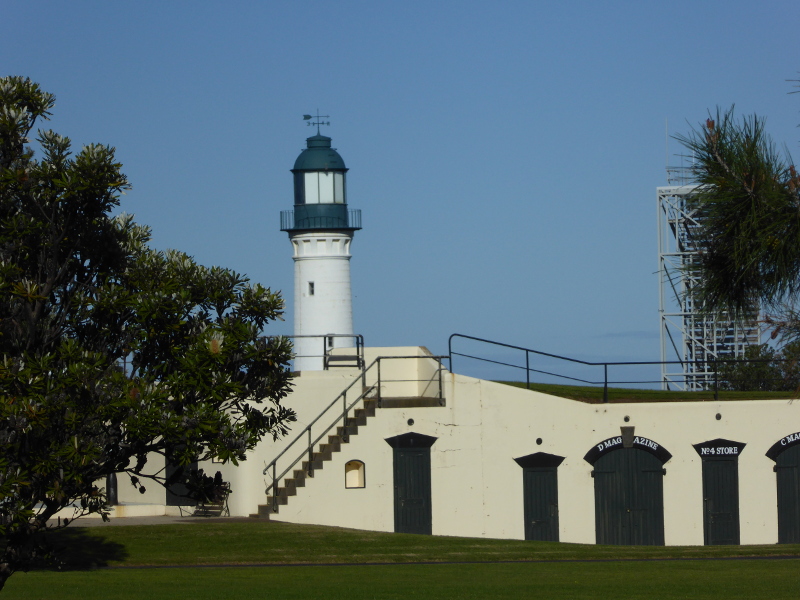 On our tour of the fort, we got perhaps our best views. And you could see why the shooting practice from the fort might cause the problems I read about in the 1912 incident I report on in the History section here. 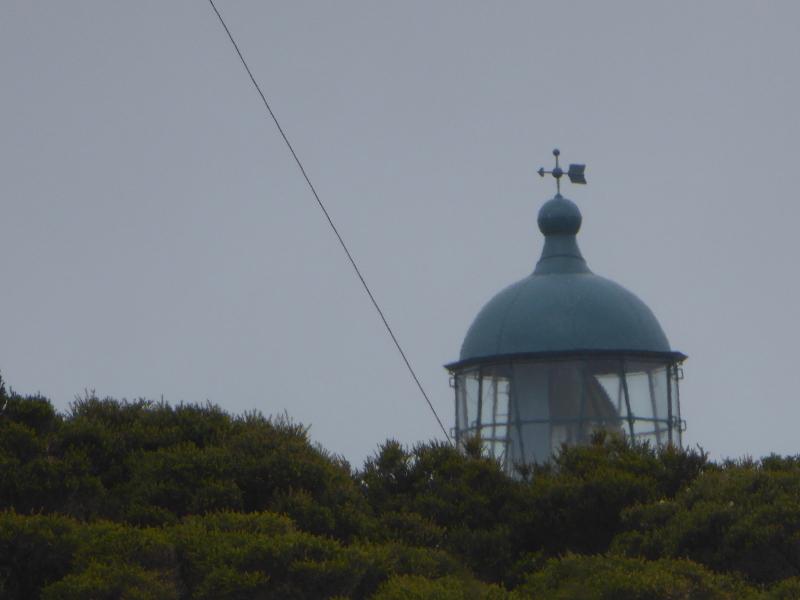 The top of the lighthouse also appeared just poking its head above the parapet of the scrub on the headland, from another perspective on our walk around Queenscliff. 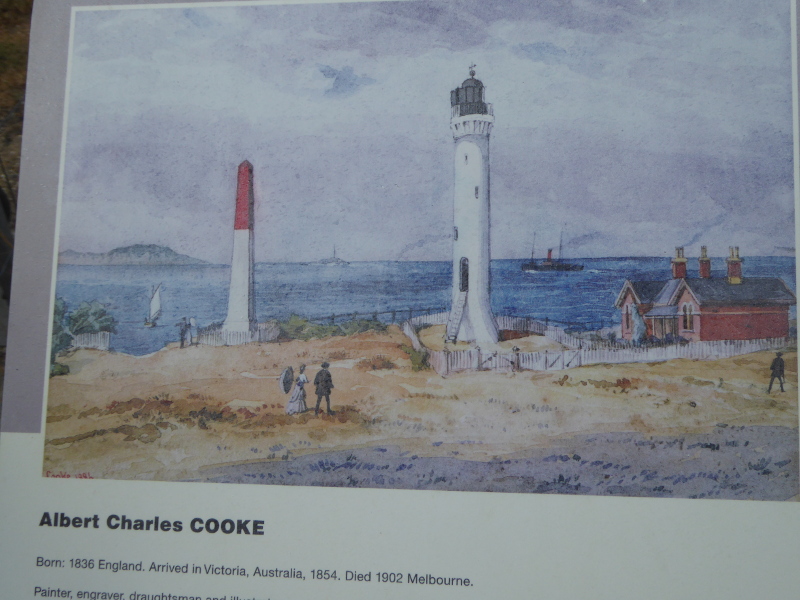 The lighthouse keeper’s cottage is long gone, sadly (anyone know when it was taken down?). So the only evidence of it is in this rather nice portrait done during construction of the Black Lighthouse in the 1860s. 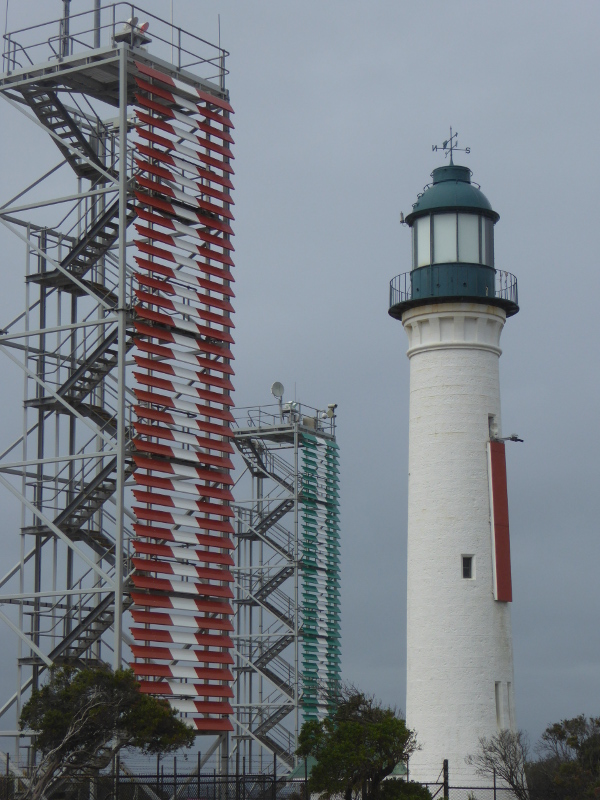 And now the main landmarks next to the lighthouse are the two towers, which help navigators find their way through the heads into Port Phillip Bay. 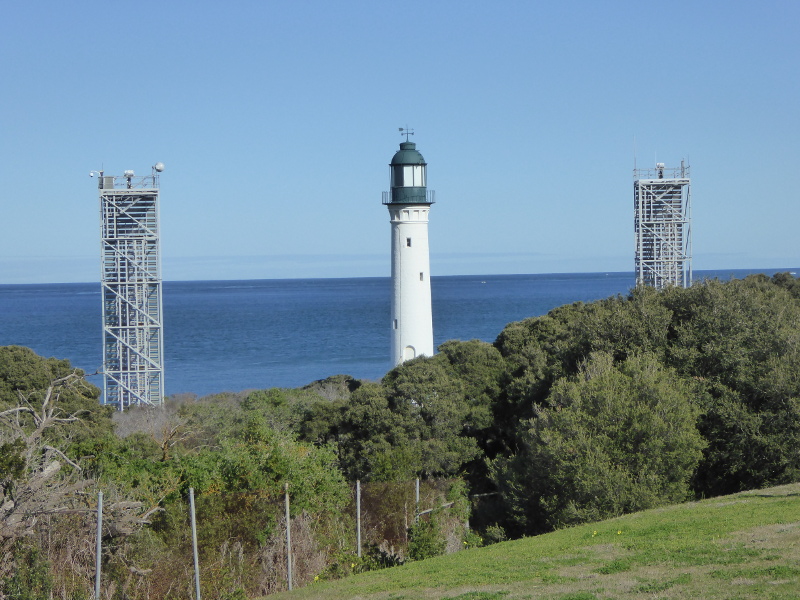 I won’t go into the technicalities of how ship crews (or pilots) find their way through the narrow entrance channel, but basically they need to line up the White and Black Lighthouses, which have red and white lights respectively (I believe). The instructions are pretty complex and used to be printed in full in newspapers some decades ago. Not surprisingly, in spite of the availability of these instructions, some navigators still got the plan for entrance into the Bay wrong, leading to several shipwrecks and boats being marooned on reefs nearby.

The very fact that they built the two navigation towers next to the Lower Lighthouse shows how complicated this manoeuvre still is, and why the Queenscliff pilots are as busy as they have ever been. 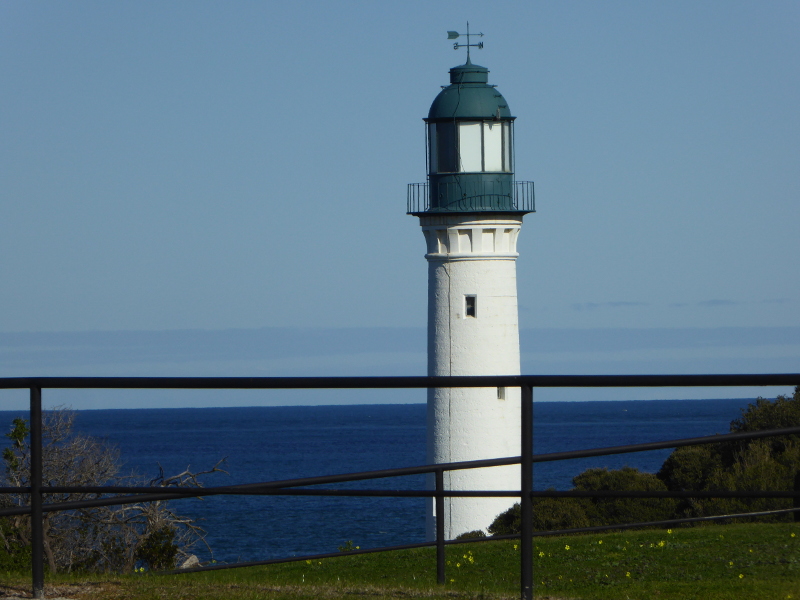 The ocean has been calm on both our trips to Queenscliff so far, but I can imagine the entrance through the Heads and dealing with the Rip on your way through, must be quite a challenge in stormy weather. 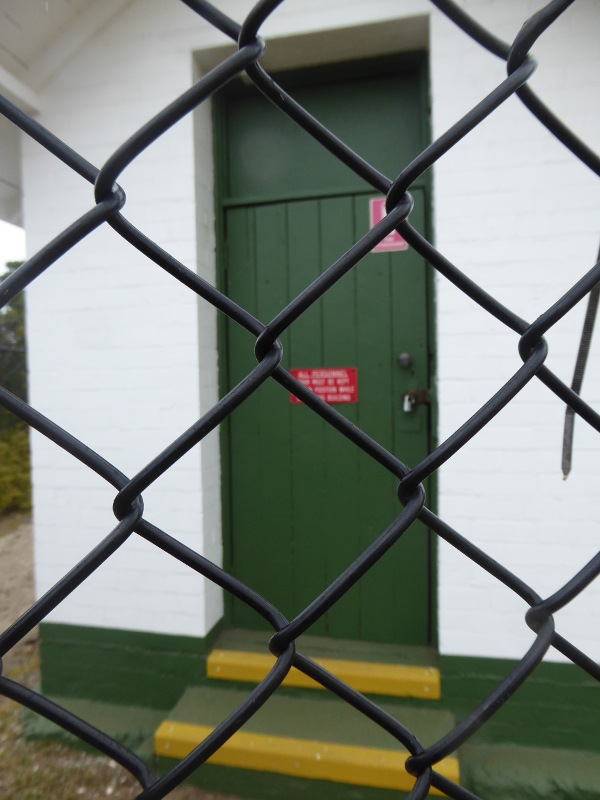 It’s just a shame there isn’t more access to – or even more information on – the White Lighthouse in Queenscliff.

There are toilets down here where you can also park your car by the shore.

The Lower Lighthouse in Queenscliff was built in 1862-3, replacing an old wooden structure which had stood here before. Judging from that portrait on the information board down by the lighthouse, it slightly pre-dates the Black Lighthouse, but not by long. 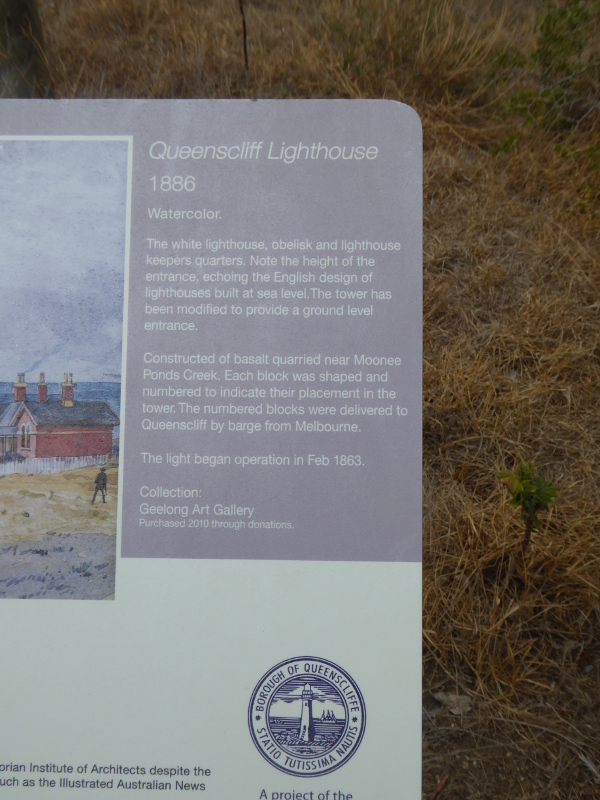 Since the two lighthouses in Queenscliff work in unison, it is hard to find stories, or even brief references, on Trove, distinguishing between the White and the Black or the Upper and the Lower.

I don’t even know if the White Lighthouse had different keepers and assistants from the Black, though I am guessing they did, since there seemed to be keeper’s cottages next to both lighthouses initially.

This was the case still in 1912, when my favourite incident concerning the Queenscliff Low Light specifically took place.

This was the year they decided to move the lighthouse keeper’s living quarters. From the moment the Fort was built up on the headland in the 1880s, the keeper’s cottage at the lower level was in the firing line of cannon practice. Residents had to move out of their home whenever firing practice was due.

But one day in 1912 the lighthouse keeper’s wife was sick and unable to move so they had to switch their practice over to Nepean Fort. This Dad’s Army scenario led to the decision being taken to move the keeper’s house out of the firing line.

What are your experiences at Queenscliff Low Lighthouse?

Has anybody actually been inside the Queenscliff white lighthouse? If so, what did you see and what was the highlight?

Has anyone got any good stories to tell about the lighthouse and/or its keepers, and how they linked up to the Black Lighthouse?

Can anybody help with a date when the keeper’s cottage for the White Lighthouse was removed?

Other links and writings on the Queenscliff White Lighthouse

The Victorian Heritage Database entry on the Queenscliff White Lighthouse is fairly brief.

The Queenscliff Historical Museum entry on the lighthouses doesn’t contain much new information, but it does have some fabulous photos, which are well worth a look.

The Nomadic Explorer blogger mentions the lighthouse in an entry from 2014 on Queenscliff. They also went to the Maritime Museum.

Cup of coffee before or after the tour?

There are a good few coffee shops in Queenscliff village itself. Our favourite was Belsize & Co in Hesse Street. Really good coffee and very friendly atmosphere.