The black lighthouse at Queenscliff pre-dates the Fort that now surrounds it by about 20 years. It’s been guiding ships through Port Phillip Heads since 1863 and still does

The Queenscliff High Lighthouse sits these days in the middle of a military fort, which is still owned and occupied by the Australian armed forces, so we had to wait till there was a tour of Fort Queenscliff before we could get anywhere near the lighthouse. 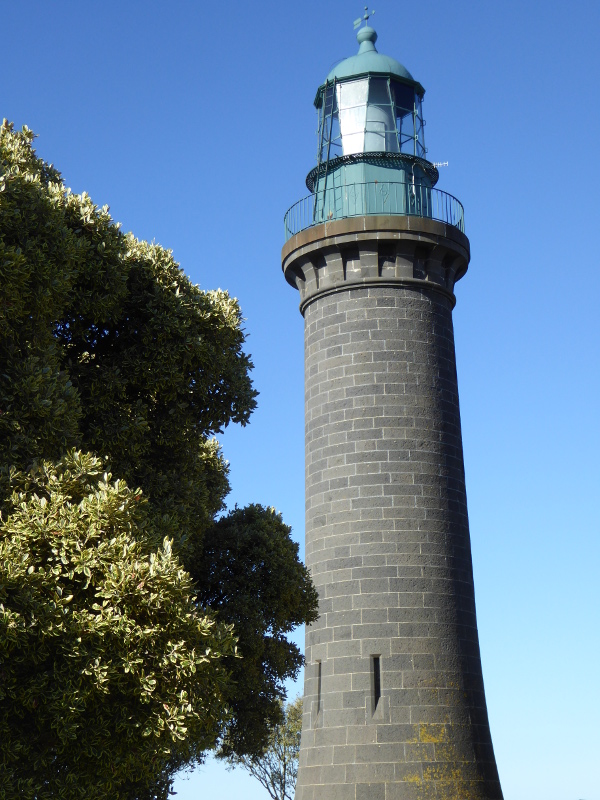 Also known as Queenscliff Black Lighthouse because of its rather unique colour, this light pre-dates the fort by a good few years, and one of the first interesting things we were told on the tour we took one sunny winter’s morning in July was that the lighthouse, and the row of old buildings opposite used to stand on the main street of Queenscliff (if such a tiny settlement as there was back then could be considered to have a ‘main street’). 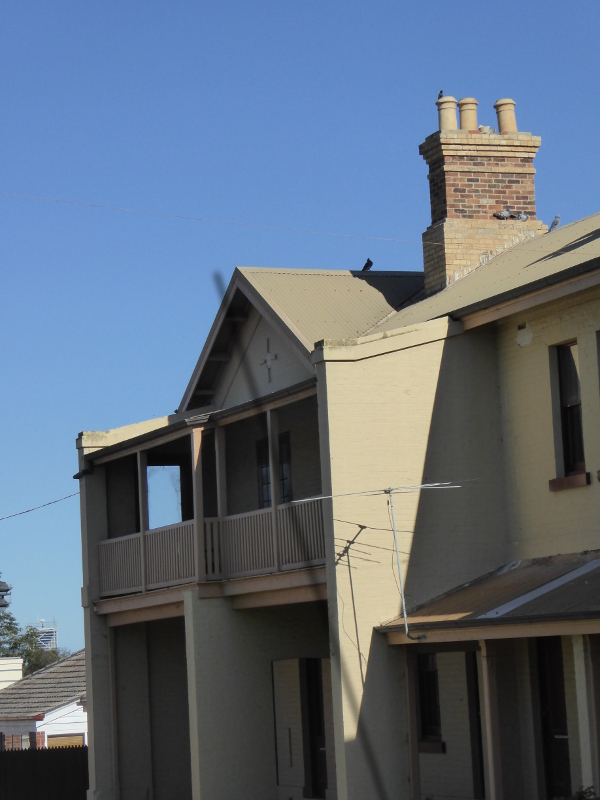 The tour of the Fort takes about 90 minutes and I think the guide we got was a bit too keen on describing in great depth the guns and cannons on display rather than going into the social history this blogger is keen to know more about. 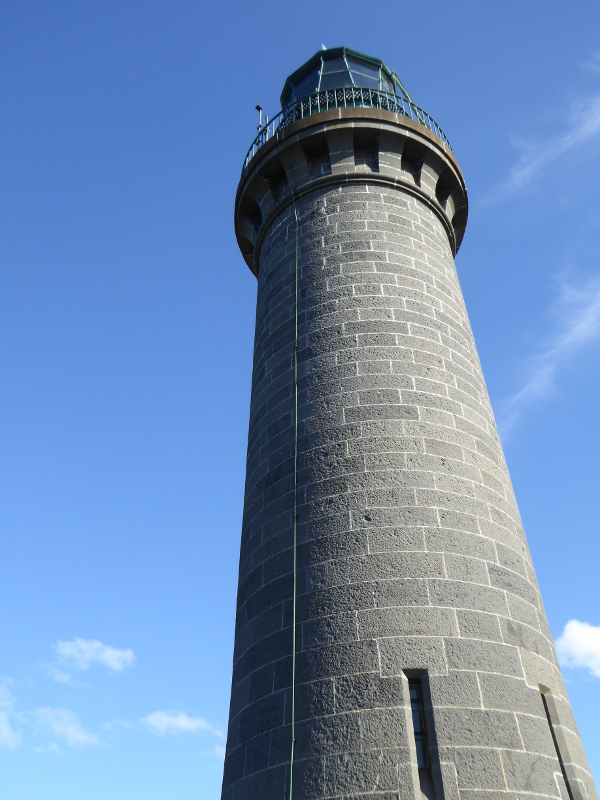 But the time flew by and there were enough interesting anecdotes to keep us keen while I kept looking for links back to the lighthouse as we walked around. Sadly, though, there was no access to the inside itself. 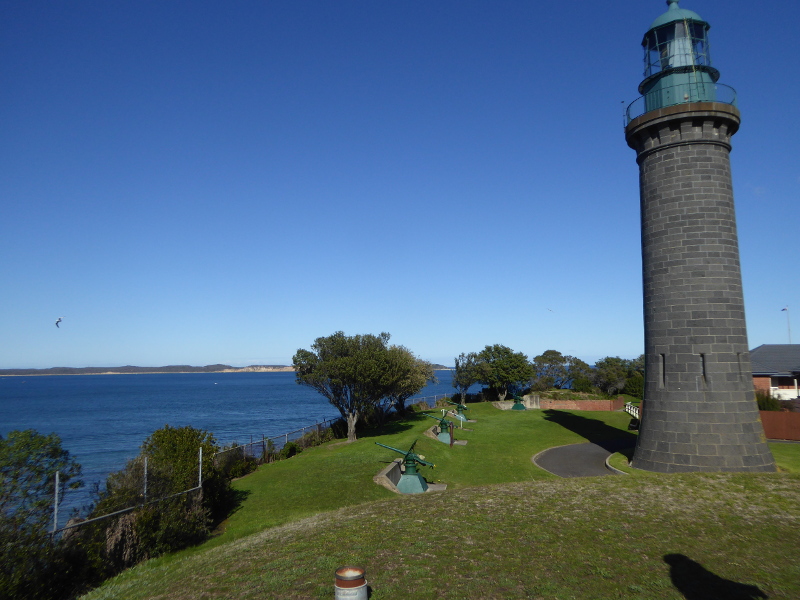 There are fantastic views out over the Port Phillip Heads from the foot of the lighthouse.

I mean, you’d expect good views from the top of the lighthouse so ships out to sea and approaching the Heads are guided in (or out), but the views are just as clear from the grassy area around the lighthouse today.

You can see why this was such a strategic spot, allowing for easy communication with Point Nepean across the Bay, from which there were indeed shots fired in anger at the start of World War One, when a German boat just happened to be leaving the Bay as War was declared, and was spotted from the Fort. When it didn’t immediately stop on request, shots were fired across its bow in what was – they claim – the first engagement of the War in 1914. 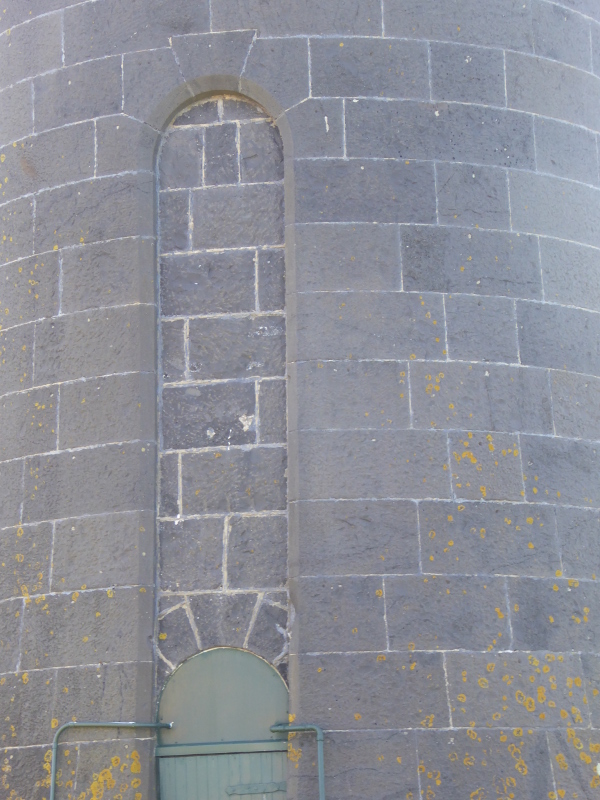 There were two entrances into the Queenscliff Lighthouse – the first one was higher up, so designed because lighthouses in the UK were often built on rocks and the entrance needed to be high enough to avoid tidal surges; the second one was carved out at ground level since at Queenscliff, with the lighthouse high up on the cliff, there was no risk of water getting inside and there were a few accidents, as I found searching through for stories about the lighthouse… 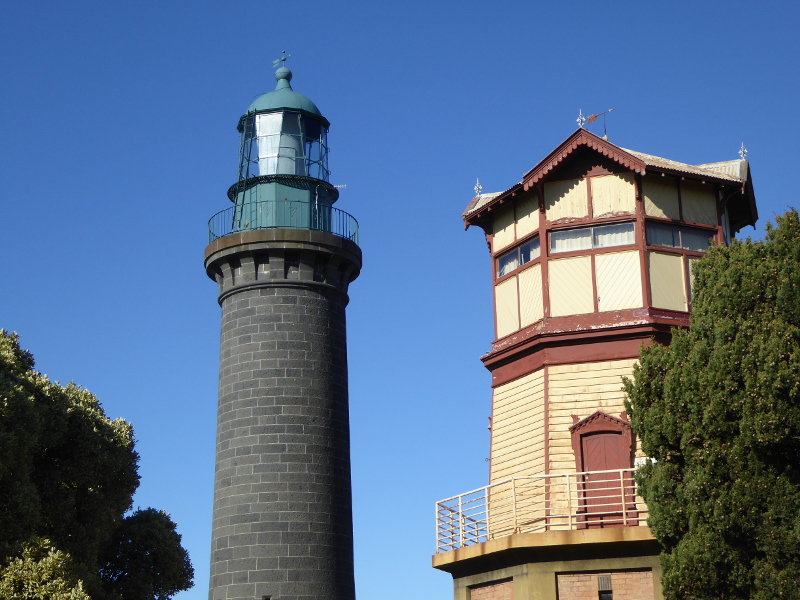 The weatherboard watchtower looks beautifully vintage next to the lighthouse today, and that also pre-dates the fort, as old pictures of the headland show.

And then there’s the glimpse of the white, lower lighthouse out beyond the modern military buildings (which we had to avoid photographing). 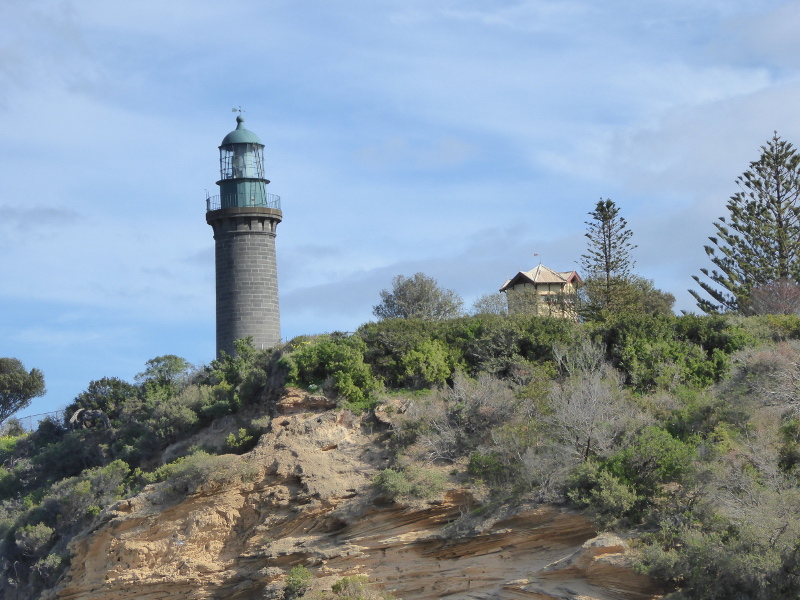 The two lighthouses worked in tandem to guide ship navigators into the Bay.  Early marine instructions showed quite complex calculations of steering directions to enable entrance through the heads, with ship navigators needing to line up the High and Low lighthouses at Queenscliff to be able to enter safely, but only once they had reached a certain point. No wonder there were so many shipwrecks round here.

Still, it sounds as if the pilots of the 21st century use pretty well the same angles to negotiate the strait as their predecessors in the 1880s.

Do check out the museum at the end of the tour for more lighthouse mentions. We rather liked the fact that the Fort had its own lemonade factory – apparently to help keep soldiers hydrated as the local water on-site was too brackish and nobody wanted to drink it. We noticed that the lighthouse motif was moulded onto the glass lemonade bottles on display in the museum. 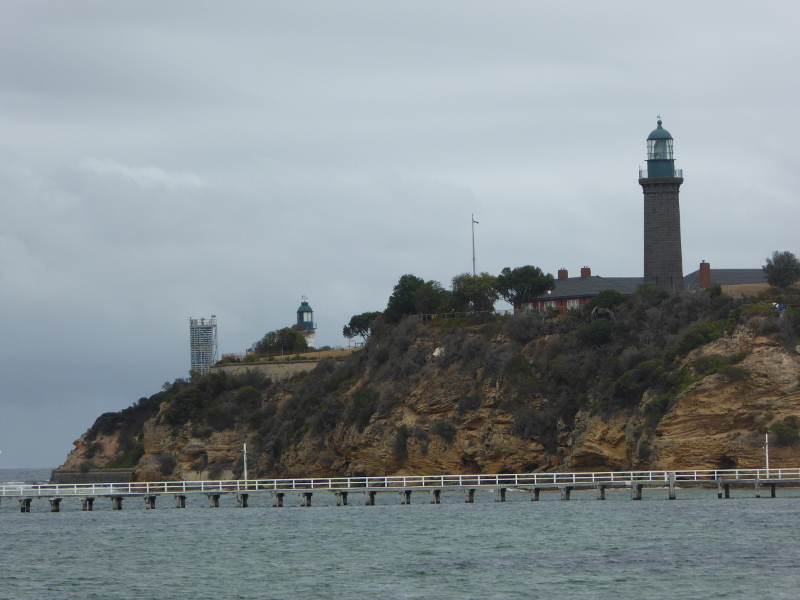 And finally, it was only from the Black Lighthouse that we spotted a second pier down below the lighthouse, which we’ll need to review for Vintage Victoria one day. This is the pilot’s pier. Today’s pier looks fairly modern, but it must have a few stories to tell of pilots heading out in rough seas in the past, so more on that later.

To enter the Fort at Queenscliff, you need to be on a tour and you’ll need to go through a check of your bags and ID. 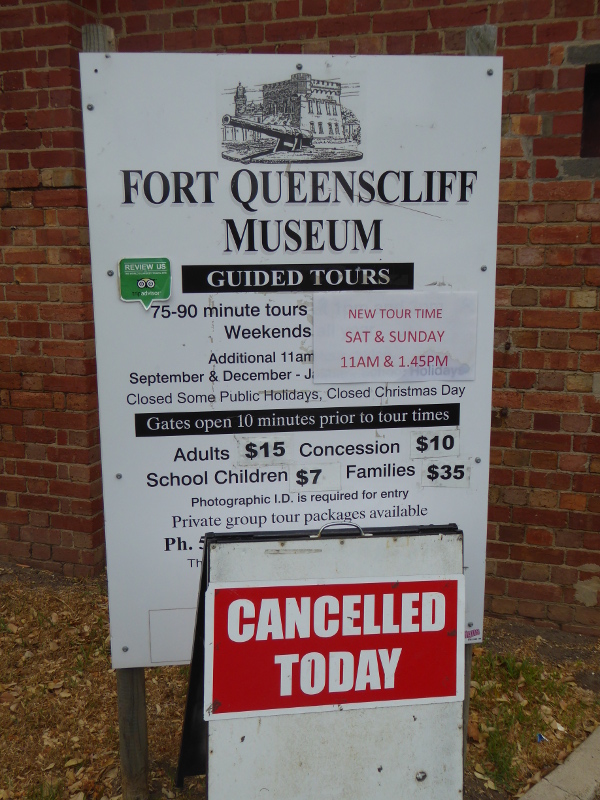 This is all volunteer-run, so things do change at the last-minute sometimes (as we found earlier in the year…), and we found it impossible to make contact by either phone or Facebook.

There was a lighthouse of sorts on Shortlands Bluff from 1843, but this black lighthouse replaced the original light in February 1863, two years after construction began. 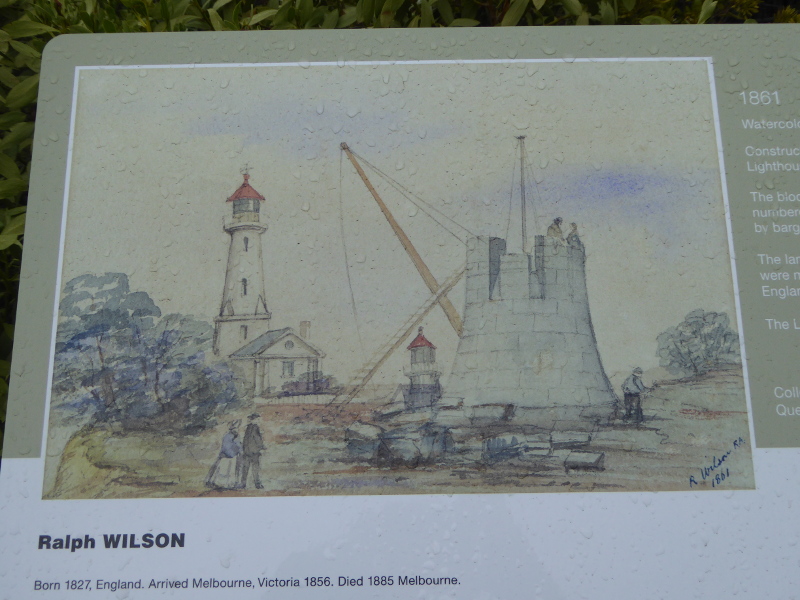 As with many lighthouses of that era, the fittings and glass material were shipped over from England by Chance Brothers of Birmingham. The bluestone was almost certainly quarried in Victoria and shipped to Queenscliff by barge. 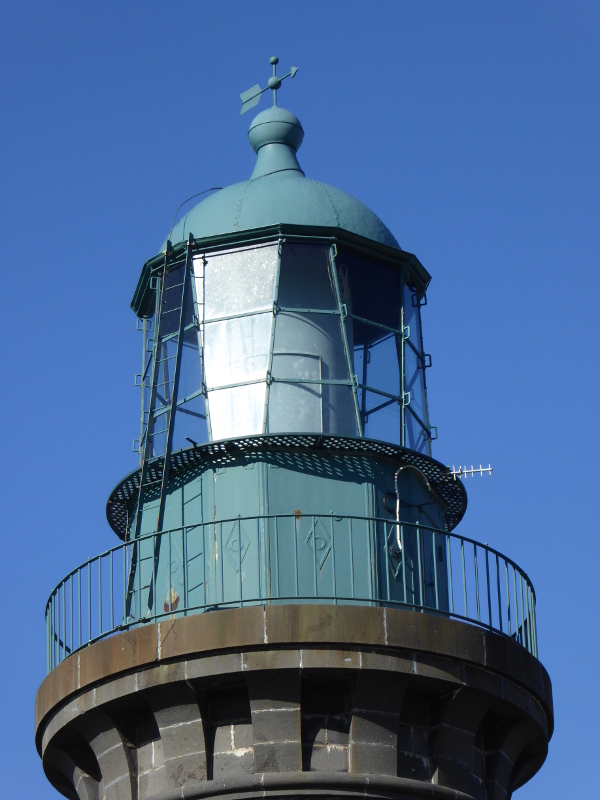 The Goldrush was in full flow in the 1860s and there were fears that as well as shipwrecks on the reefs and rocks between the Heads, there might be raids on gold-laden boats by pirates and/or Russian-owned ships in these post-Crimean War years when the Russian threat was seen as being as real as it was during the Cold War. 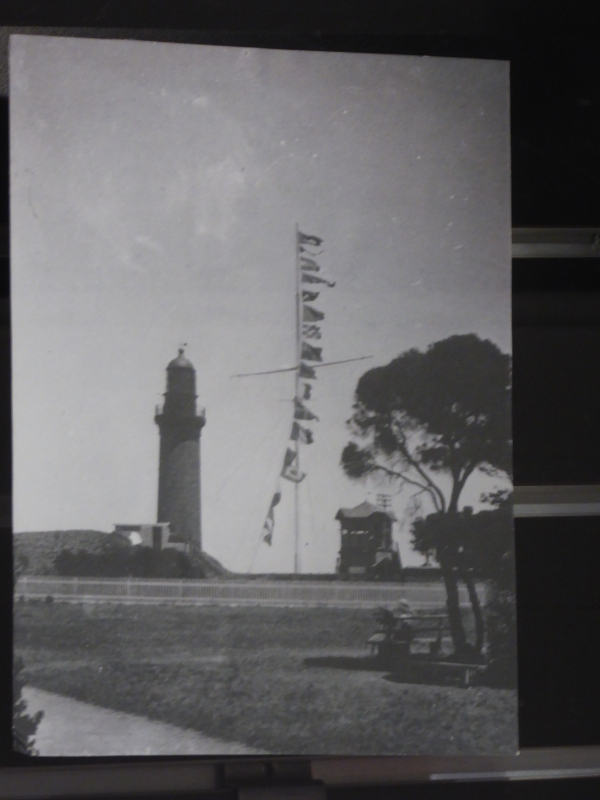 I still don’t quite get how the civilian-operated lighthouse worked inside the military fort after 1882. Presumably the lighthouse keepers and their families lived inside the Fort and did their shopping in town along with other residents, though we didn’t really get a sense of that from our guide who seemed more interested in military matters than social history.

He did explain that the original lighthouse keeper’s cottages still stand opposite the lighthouse and he showed us the road that divided the line of buildings from the lighthouse tower itself; a road, which used to carry on into Queenscliff itself before the perimeter wall of the Fort was built.

That old keeper’s house then became the military hospital (and was still that until relatively recently), but exact dates are hard to find, and I guess the newspapers weren’t able to report on such changes and developments in case Too Much Information got out to the ‘Enemy’, or whoever might be interested for the wrong reasons.

The Queenscliff lighthouse beam and the fort built around it had the newspapers excited in 1885, as rumours spread of Russian invasion on the horizon. “The most nervous old lady in the colony will be able to retire to rest without any dread of being awakened from her beauty sleep by the ‘hoof of the ruthless invader’,” thanks to the defences in place at Queenscliff and over the Bay at Nepean Point.

However, in a news report I found from 1887 analysing Melbourne’s defences, the lighthouse was  also seen as a danger, as the lights would make it easier for any invasion force out to sea to direct their fire more accurately on the fort itself. Of course, the Russians never came and the Fort never did have to fire up its big guns…

There were regular reports of ships running aground on the rocks or being holed by the reef, and the lighthouse keeper and his assistants clearly had a busy time keeping an eye on shipping through here, with many a rescue coordinated via the lighthouse and Queenscliff Pilot Service.

Not all stories concerning the Queenscliff High Lighthouse were about tragedies at sea, however.

In 1890, a lighthouse attendant got the shock of his life when a fully grown swan flew directly at speed into and through one of the thick glass windows of the lighthouse and landed at the bottom of the staircase in a heap. The swan did not survive, though the attendant did live to tell the tale.

In 1907, a keeper slipped on the top step going up into the lighthouse and fell 15 feet to the ground – thanks to that raised entrance built for sea-level lighthouses in the UK! No wonder they built a new door at ground level after that incident!

In 1910 fog fell over the area, making the lighthouse barely visible. There wouldn’t have been much sleep for local residents of Queenscliff that night, though, as nine ships anchored in the Bay for the night and kept up a constant sounding of bells and whistles so that anything moving in the pea-soup would know where they were.

In 1936, the Queenscliff Lighthouse had a minor role to play in Hitler’s so-called elections to the Reichstag (Nazi candidates only, by the way). There seemed to be some bizarre rule where Germans overseas had to board a German vessel and be in international waters to be able to cast their ballot, but foreign ships were not allowed to send or receive radio messages within Port Phillip Bay so Hitler’s message ordering the ‘Stassfurt’ steamer to return to Melbourne and pick up voters had to be flagged from the Queenscliff Lighthouse to the ship via the Queenscliff Pilot. It made the news because all this toing-and-froing meant the Stassfurt passed through the Heads half a dozen times in a couple of days, something of a record for any vessel, and no easy feat.

What are your experiences at Queenscliff High Lighthouse?

Has anybody been inside the Queenscliff black lighthouse? If so, what did you see and what was the highlight?

Has anyone got any good stories to tell about the lighthouse post-1936, since that was the latest story I found on Trove that caught my eye?

If you know some of the history of the lighthouse, what’s your favourite shipwreck or rescue story involving the Queenscliff High Light?

And if you have been to the Fort and got your own impressions of the lighthouse, do share them with us here…

Other links and writings on the Queenscliff High Lighthouse

This lighthouse blogger is trying to get to all the lighthouses in Victoria. Here is her post on Queenscliff.

This is photographer Julie Powell’s take on Queenscliff Black Lighthouse.

This vimeo video shows the lighthouse from the air, though I’m not sure they ought to have captured those brick buildings in the shot…

Cup of coffee before or after the tour?

There are a good few coffee shops in Queenscliff village itself. Our favourite was Belsize & Co in Hesse Street. Really good coffee and very friendly atmosphere.