My experience on the Puffing Billy railway

I finally got to ride the steam train from Belgrave to Lakeside on a cold, damp morning in mid-May, having cancelled a previous trip due to the threat of bushfires at a completely different time of year, back in December 2019. 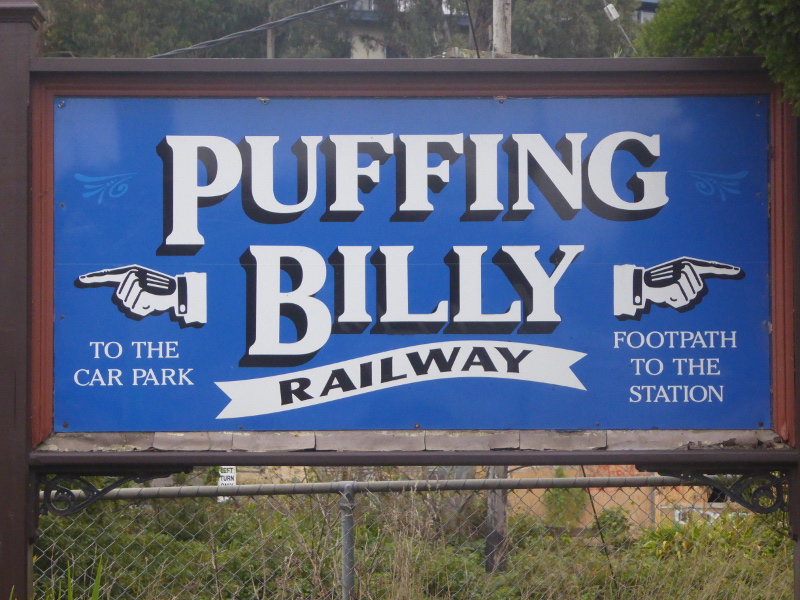 I mention that right at the outset because the weather makes a big difference to your experience on Puffing Billy, and I was simply not dressed warmly enough for the basically open-sided carriages that trundle up through the Dandenong Ranges on this winding, narrow-gauge rail route. 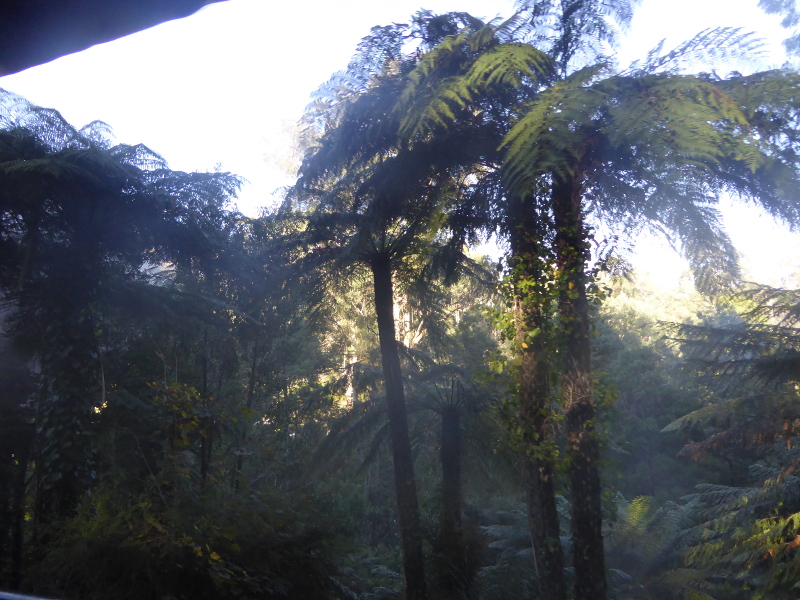 Within a minute of leaving Belgrave you are hemmed in on either side by tall gum trees, which eventually give way to the fern trees that give the town just down from Belgrave its name (Ferntree Gully). So, if bush fires are in the area, you might want to keep a close eye on their progress – I know flames licked the tracks in fires back in the 1930s, and I wouldn’t fancy being stuck on the train on a day like that. 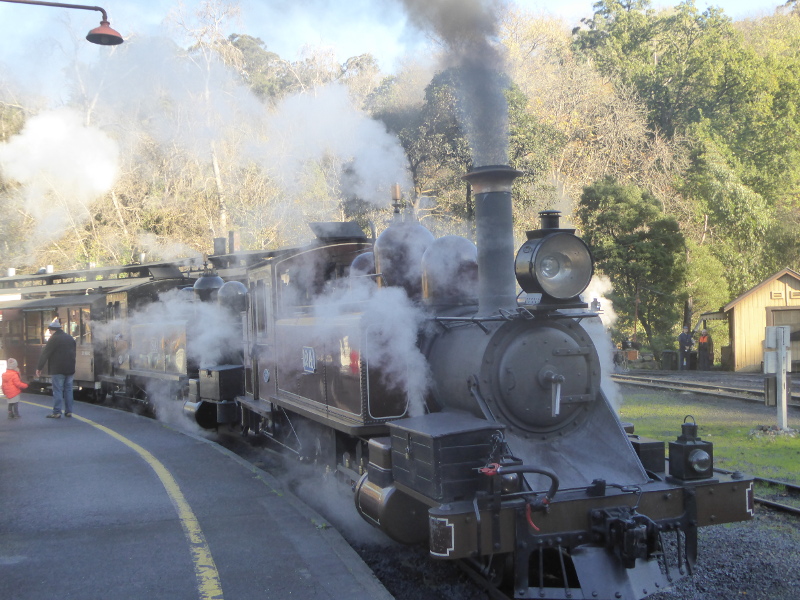 Having given those warnings, I can honestly say the experience of riding Puffing Billy (or the carriages pulled by the engines at the front) was as enjoyable as everyone says. 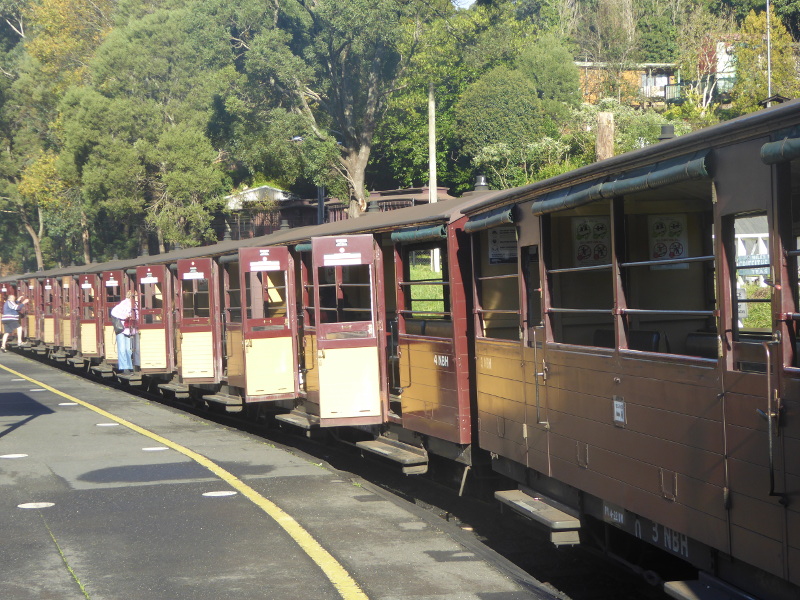 Those carriages are a step up from the ones involved in the 1906 accident – at least they have a roof over them – but, aside from a plastic blind you can roll down for protection if the heavens really open, you are totally exposed to the elements on this ride, and there was a stiff, cool breeze blowing as we set off from Belgrave. 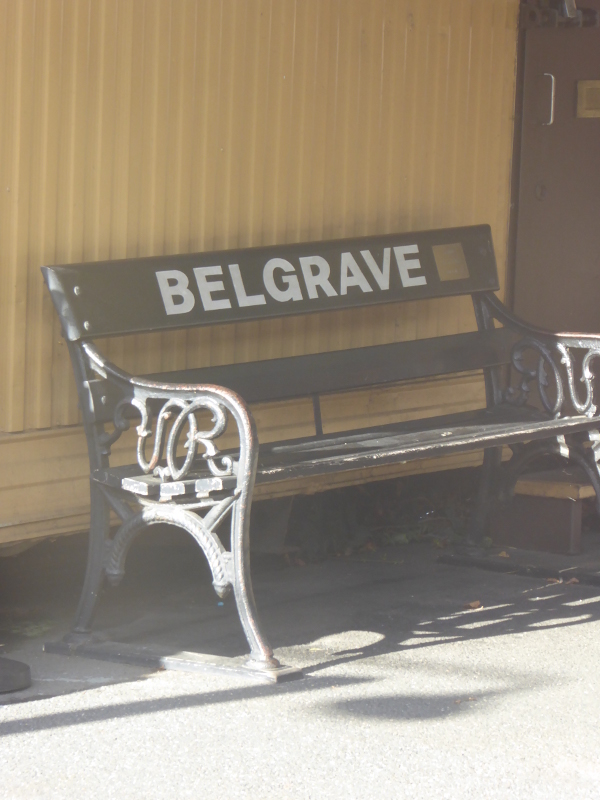 The compulsory mask-wearing due to Covid is slightly overdone, therefore, since good air flow and ventilation is probably more important to preventing cross-infection than anything else, and cross-air flow there certainly was…At least the masks kept my face warm! 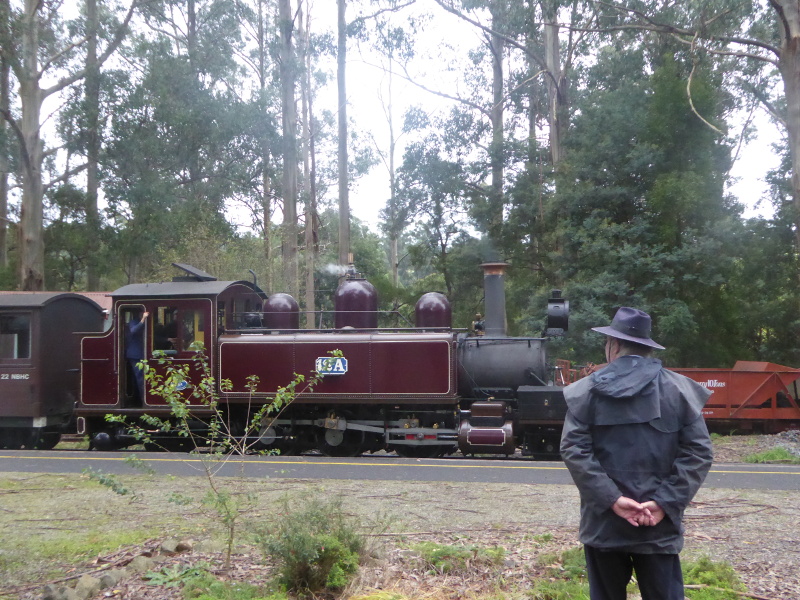 Puffing Billy is a fantastically well-run operation, though.

All the volunteers cheerily getting people aboard – I love the “All Aboard!” cry before departure – it just smacks of old Westerns or a bygone age more generally. There was even a real fat controller – as in the railway books series, though I’m sure we aren’t allowed to say such a thing anymore – ringing his bell to mark the OK to set off from Belgrave. 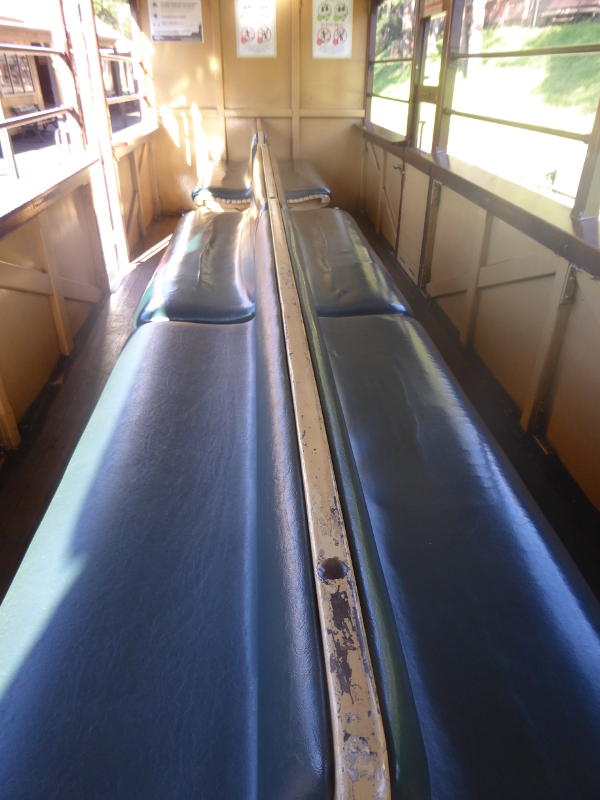 The seats are fairly comfortable, though you have to get used to sitting facing the side of the carriage, and the best views are to be had from the seats on the right-hand side going up the line. 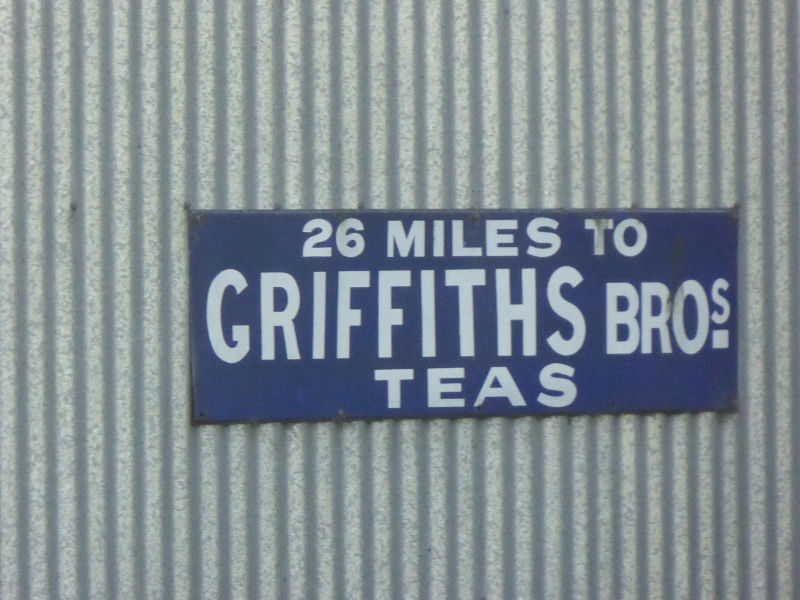 I was very pleased to see this old advertising for Griffiths Tea on one of the buildings just outside Belgrave station. These signs used to be all over Australia along train lines (and maybe roads too?) when Australia was the world’s biggest tea consumer before and after the war. Nice that they found a 26 miles to Griffiths sign…or was this always here? 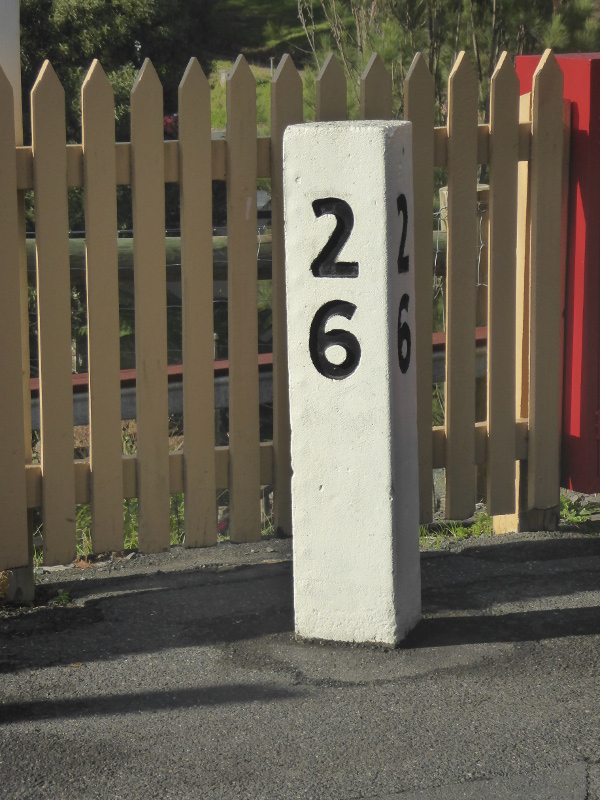 Not far from Belgrave is this trestle bridge, which is a wonderful construction in itself, and must be quite close to where the 1906 accident happened, I’m guessing. 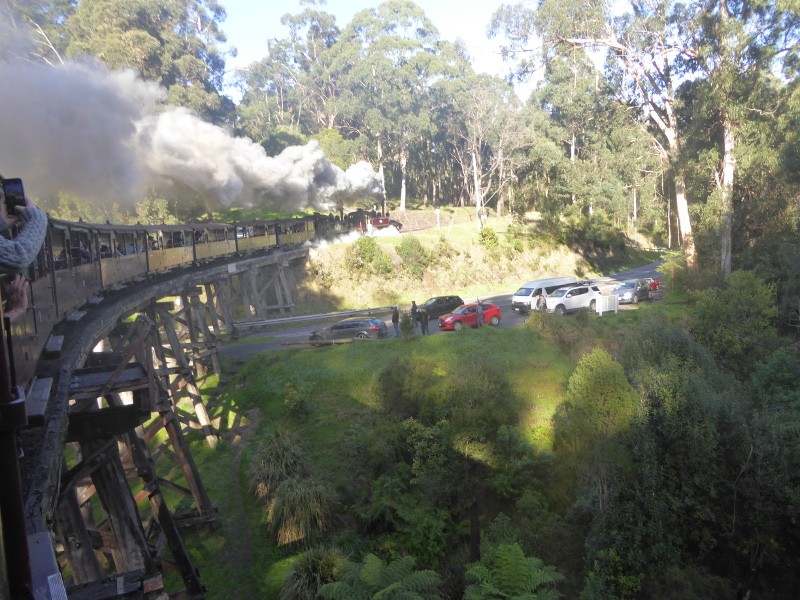 A little further on is the site of the 1953 landslide, which led to the closure of the line as a regular passenger-carrying service. This spot is marked with signage, and some original track, these days. 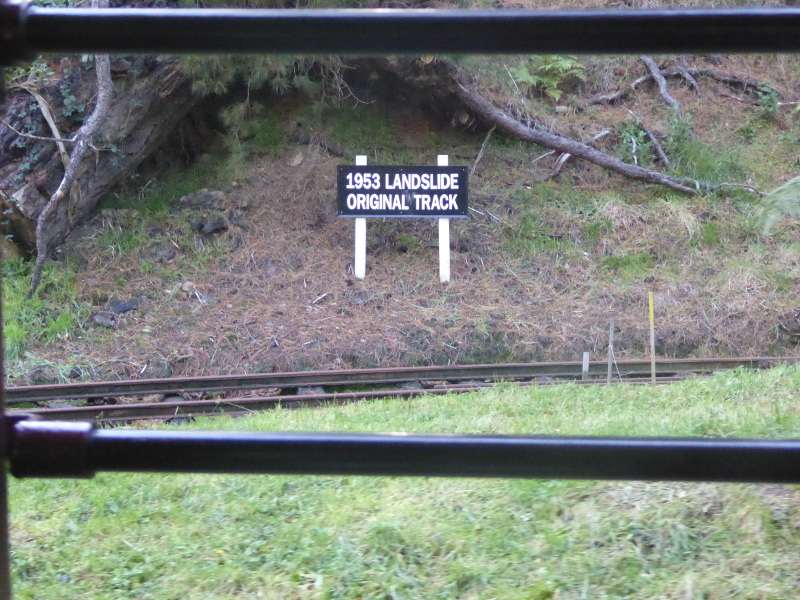 Then we come to Selby, which looks about as like the Selby I grew up near in Yorkshire as Puffing Billy does to the Eurostar. Selby is tiny and totally tree-bound – a lovely spot, but a far cry from the railway hub on the canal and River Ouse that I knew in my childhood. 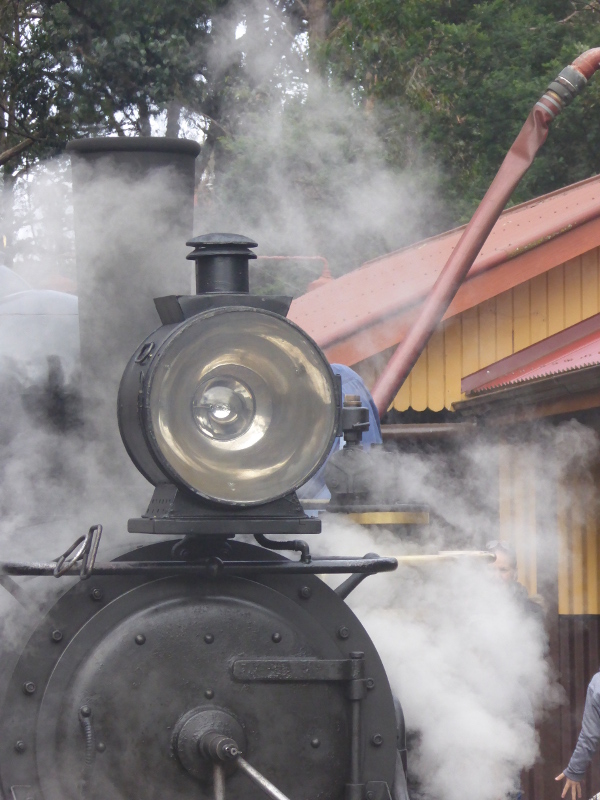 Steam quickly filled the valley and forest as we climbed, and I noticed black specks on my trousers, reminding me of that classic moment in Brief Encounter when the doctor helps remove smut from the lover’s eye. Steam trains might be romantic in 2021, but they were pretty dirty things, and still are. 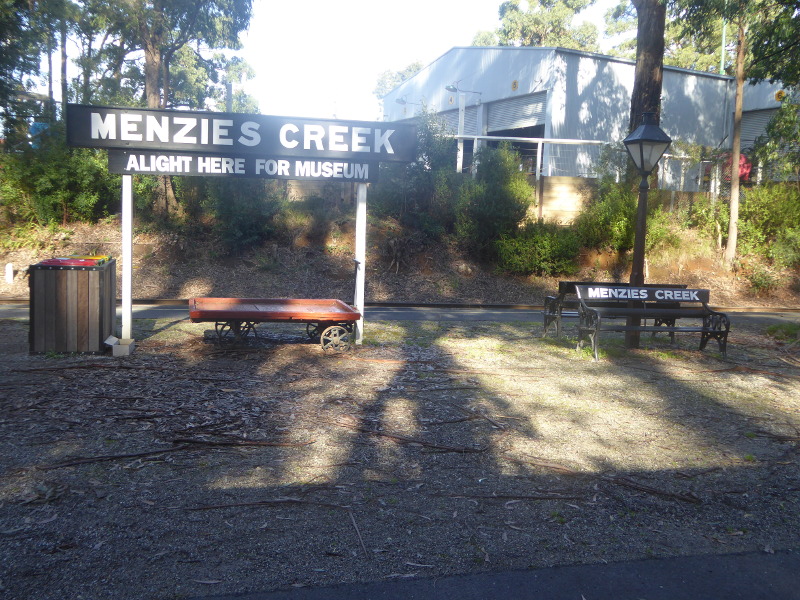 A big crowd of passengers got out at Menzies Creek, home of a train museum. It’s interesting how the kids in my carriage reacted on spotting the sky-blue colours of Thomas the Tank Engine up in the museum grounds. They seemed more excited at that than at the actual train ride in the real steam train. And yet, the actual steam engines pulling us up the hill resembled the original Thomas the Tank Engine (from the railway books) much more than the cartoon animated version up in the museum, but I guess for modern kids, it’s that cartoon Thomas that feels real… 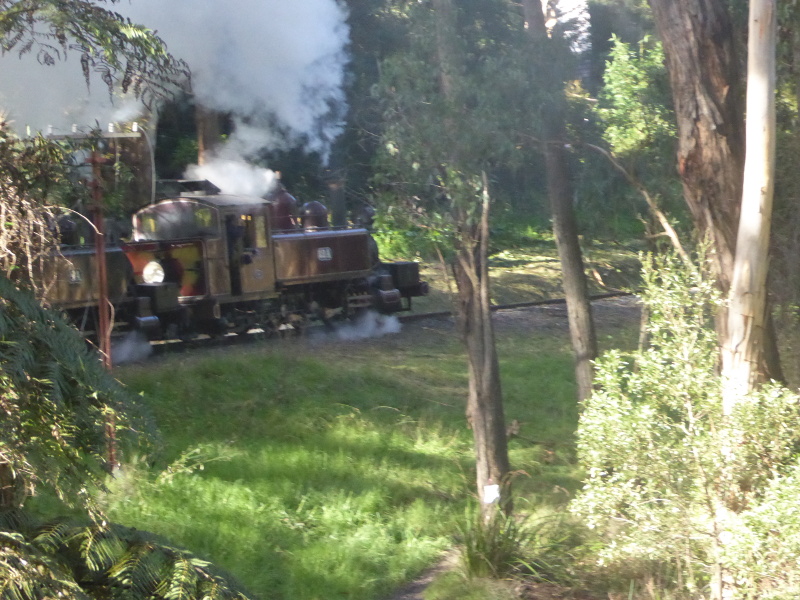 From Menzies Creek we climb to the highest point on the line at Emerald. I loved the fact that this little community calls itself the ‘gem of the hills’. And all the locals seemed to come out to their balconies or garden fences to wave at Puffing Billy as it steamed by. What is it about steam trains that just bring a smile to everyone’s faces?

Just to prove how elevated we were at this stage, we then passed a field of Scottish highland cattle – we were doing a fair lick at this stage and I didn’t have my camera at the ready. We sped through Nobelius, and I couldn’t help wondering if this was the speed reached by that driver who got suspended for the crash that happened all those years ago. 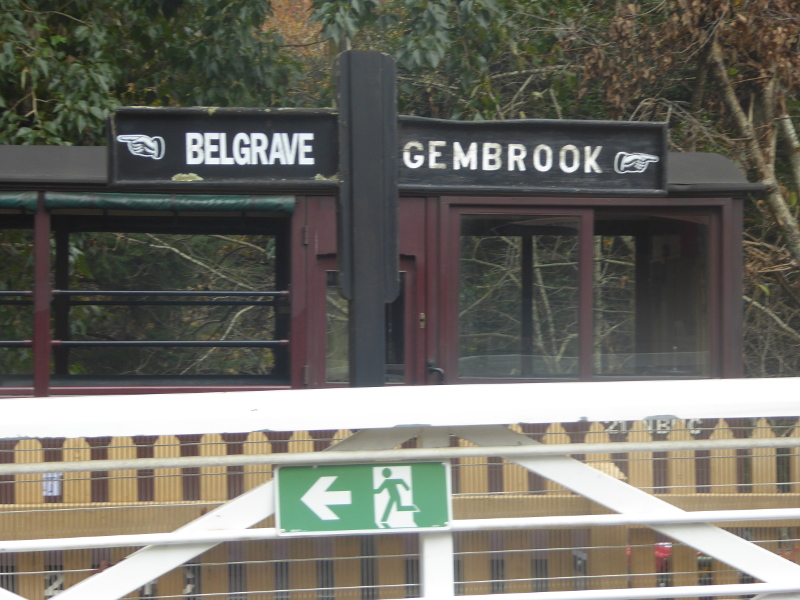 And then we reached my destination at Lakeside. Other trains headed further on up the line to Gembrook, but I had a schedule to keep, and Lakeside was a good journey at about 16 kilometres, done in just over an hour. 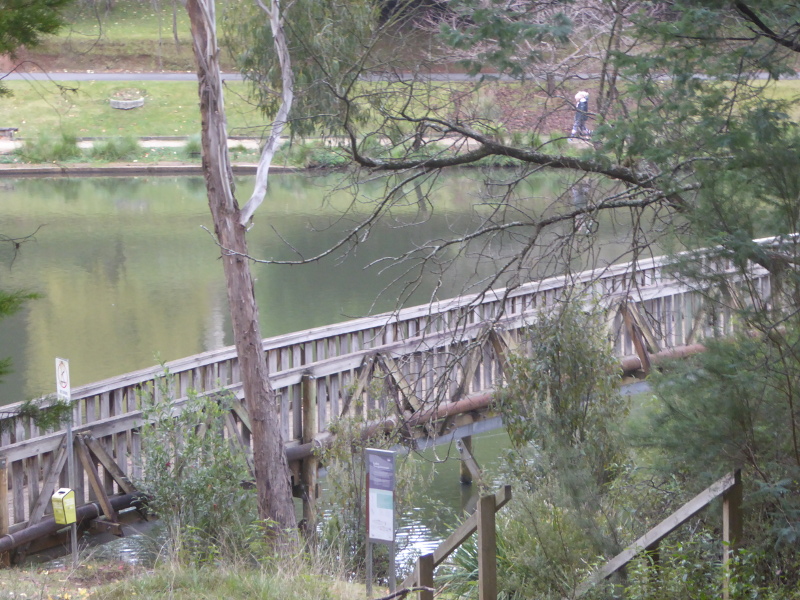 The lake at Lakeside used to be a popular swimming spot, apparently. But now, apart from this nice-looking wading pool… 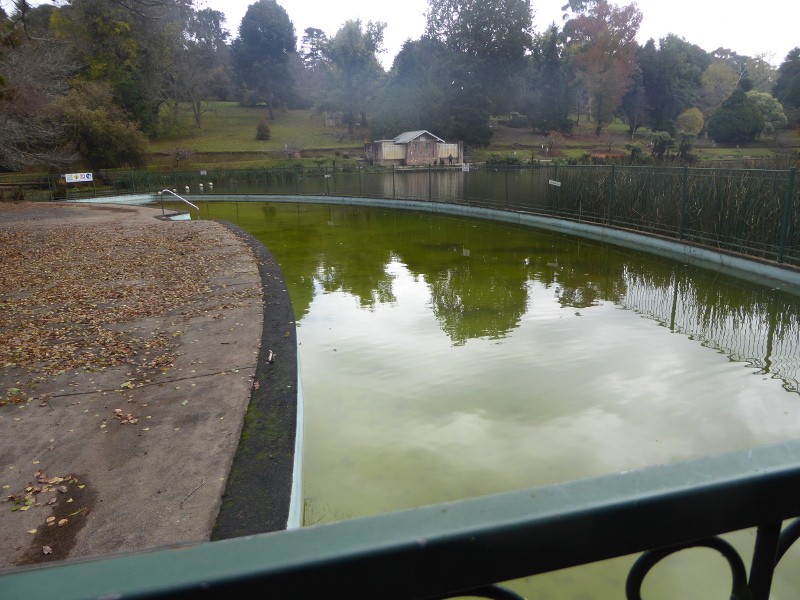 Swimming in the lake is actually forbidden, unless you’re a purple swamp hen. 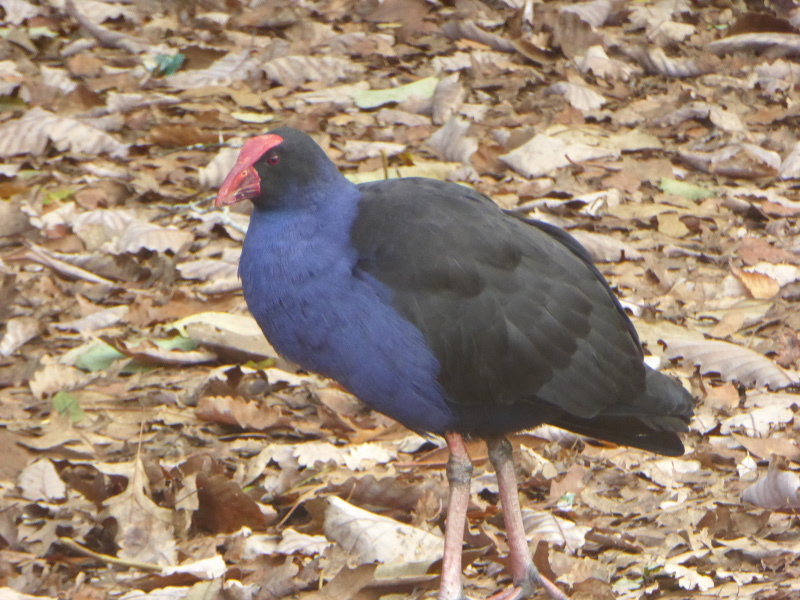 Though most of those rather beautiful birds seemed to be scrounging around on land looking for scraps. 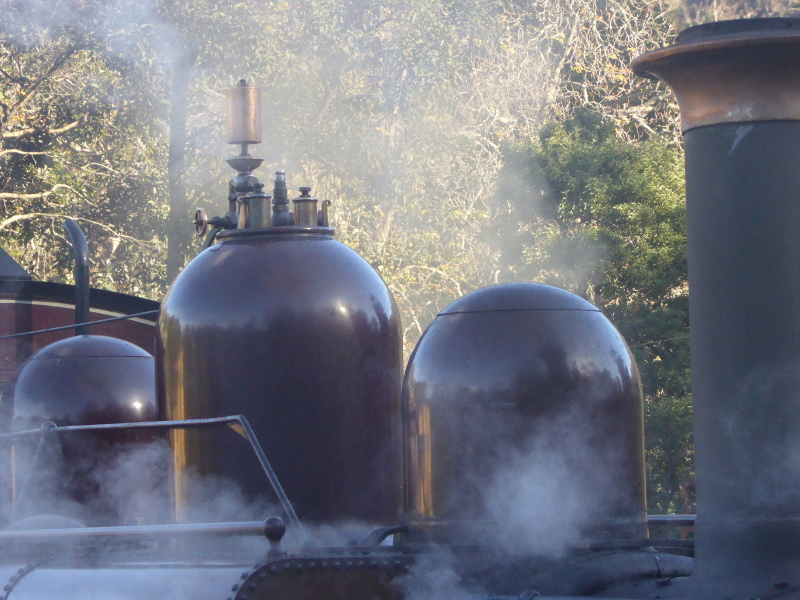 More tooting followed as we were called back to the train for the return trip down to Belgrave. More bell-ringing, another resounding ‘All Aboard!’ and back we went, this time in persistent drizzle (though no need for those plastic screens, thankfully).

Four hours very well spent, Puffing Billy definitely gets a thumbs up from me.

They are building a big visitor centre at Lakeside, but it was not yet completed when I dropped by in May 2021.

Decent coffee at the ‘tea rooms’ at Lakeside station (though they are not quite as elegant and olde worlde as their name implies); and a nice range of cakes with more coffee at the Lakeside Café, where there were also seats inside.

Toilets all over the place both at Belgrave and Lakeside.

History and stories from Puffing Billy

The narrow gauge railway from Belgrave to Gembrook opened in 1900. The Belgrave station was apparently then called Monbulk (though I’ve only seen that in one article and the 21st century Monbulk is some way from Belgrave).

The engine carrying people up the 18 mile track was called Puffing Billy from the start, though for a while ‘Hissing Jinnie’ was also used.

There was a bad accident in 1906 – 4 carriages left the line about half a mile from Belgrave station. There were extraordinary photos in the Leader newspaper of the aftermath of the accident, showing the ‘carriages’ were like modern-day cattle trucks with just a tarpaulin over for a roof, but passengers travelling elegantly in hats and the ladies in long gowns. 40 people were injured in the accident. There was a formal inquiry, which seemed to blame the condition of the track as much as speed for the train overturning on sharp bends. But the poor train driver – obviously under pressure to make up time on a delayed train – seemed to be the scapegoat, as he was demoted to Fireman for 6 months after the crash.

There were occasional minor incidents in following years, with lots of discussion about delays and train times as the area slowly began to fill with people wanting to commute as well as come to Belgrave for weekends away.

But the next major incident to hit the headlines came after heavy rain in the area in October 1923. Landslides sent 50 tons of earth onto the track about three quarters of a mile up from Belgrave, while rain flowing down the valley towards the gully below forced gaps to appear under some of the tracks that were not covered in mud.

There were campaigns in the late 1920s to have the line converted to broad gauge for easier connections to other services, and even for the line to be electrified. But even then, the line was not seen as commercially viable enough to make the massive investment needed.

A big conference was held in 1935 on whether to shut the line and promote buses instead – a major US company involved, trying to bring in buses…

March 1936 saw bush fires reach the line, damaging one of the wooden trestle bridges; and the fires were so bad in 1939 that the tracks buckled in the heat, forcing passengers onto buses to get them home.

The Age in November 1944 described Puffing Billy in romantic tones: When the gallant little engine first broached the foothills and circled the slopes, it added a bustling note to the calm loveliness of the Dandenongs, and its noisy “chuff-chuff” rang through the hills, blending with the chuckling friendliness of water hurrying through ferny places. Stopping at little wayside stations, it paused a while as if to get its breath for the next pull and then was off again, busy and cheery.

Not much has changed then in 77 years…

The campaigns for electrification and broad gauge carried on for 20 years, until the election of the Liberal Government state-wide in 1948, which put any development on the back burner. Although heavily criticised at the time, we actually have to thank that post-war Government for the continuing existence of the Puffing Billy today…

Car ownership after the war and then landslides in 1952 and 53 finally led to closure of the track. By 1962 railway preservation volunteers had got the steam trains back up and running, though it took a while longer to have the full line reopened. Lakeside was reached by 1975 and Gembrook some years later.

In those intervening years, ‘Puffing Billy’ did do some runs between Ferntree Gully and Belgrave, and one engine was hired out to a narrow gauge line near Colac for some freight work, but we are lucky that the engines known as Puffing Billy weren’t all put on the scrapheap.

What are your experiences on Puffing Billy?

Does anyone just have a good memory they’d like to share about their experience riding Puffing Billy?

Has anybody ridden all the way up to Gembrook and have some highlight they’d like to recount?

Is anybody still around who remembers the landslides in 1953 which finally closed the regular passenger service up the line from Belgrave?

Other links and writings on Puffing Billy

Gillian Brazier did her trip on Puffing Billy downhill first before riding back up to Lakeside later.

Some lovely photos of Flinders Street station on the Interesting Trains blog entry before they made their way up to Belgrave for Puffing Billy.

The Melbourne on the Move blogger rode Puffing Billy in 2017.

The Two Sisters Tasmanian blog took a trip across to Victoria for Puffing Billy in 2017.