From access point to the quarantine station to playground of the rich, Portsea Pier has seen a lot, and still does today with snorkelling and sandbags nearby

Portsea Pier is about as far down the Mornington Peninsula as it’s possible to go, and certainly of all the piers on the peninsula, the furthest from Melbourne. 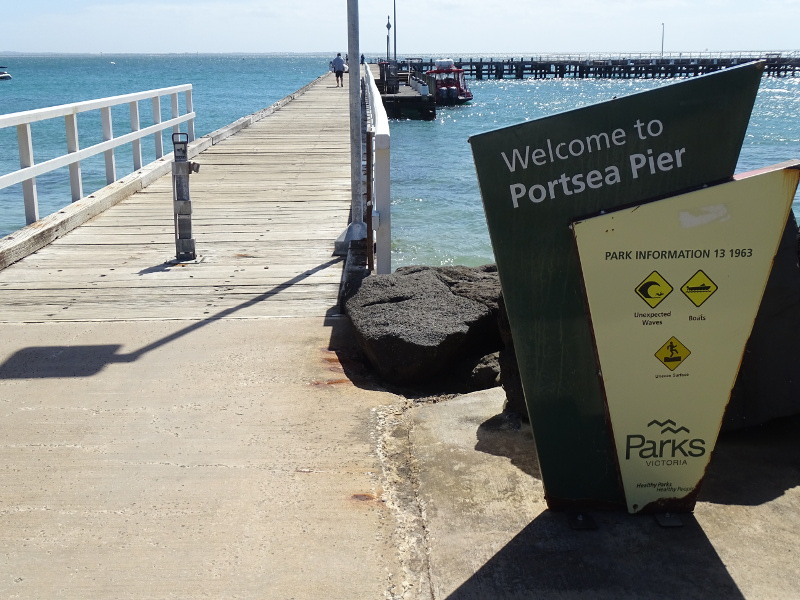 It was a bright, but breezy March morning when I visited Portsea. With summer holidays long gone, there weren’t the crowds that must flock here in January, but a nearby girls’ school clearly had some sort of activity day on, as there were lots of teenagers around, and a party of them getting instruction in basic snorkelling skills right next the pier.

It’s not a bad spot to learn, though, with waters having that turquoise tint I usually associate with the Caribbean. 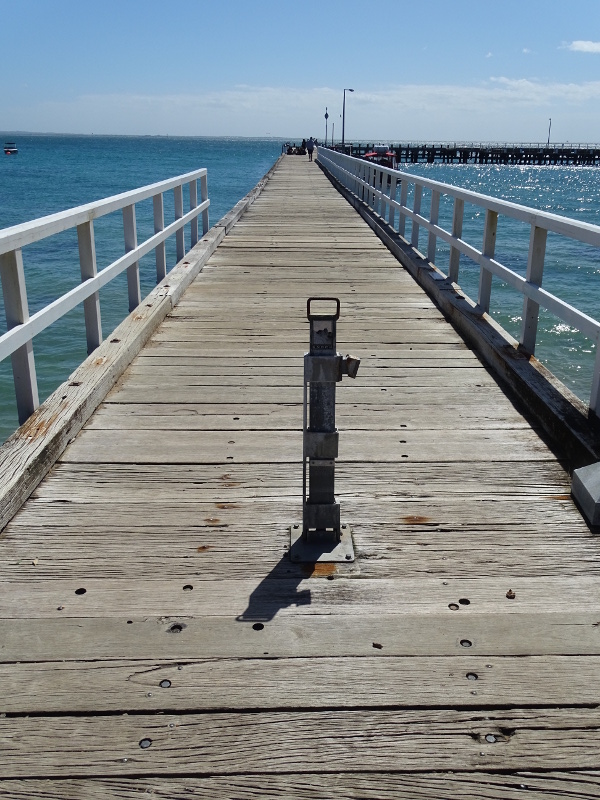 The breeze was strong enough for me to need to hold onto my hat, though, making me juggle lunch, camera, hat in order not to lose anything over the side. This must be a dramatic place during a real storm.

And judging by these amazing sand bags along the shore next to the pier, the locals think so too. 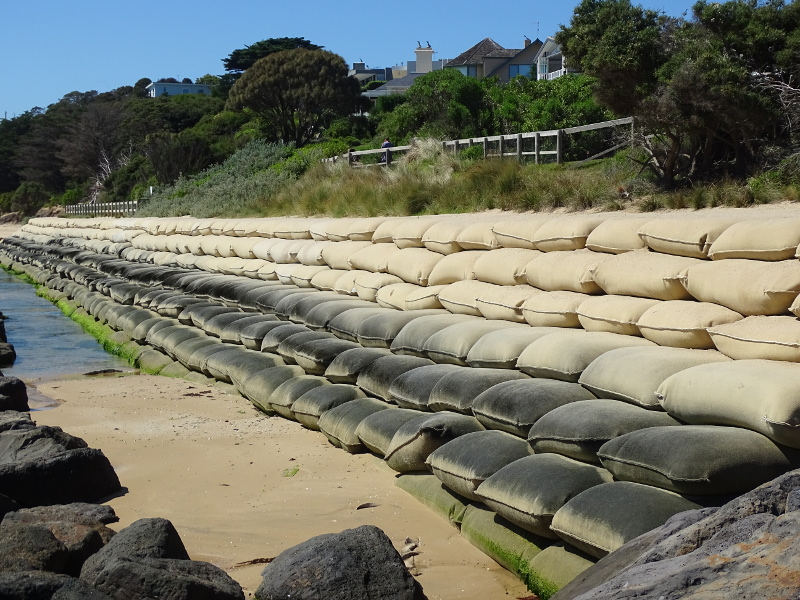 Portsea Pier is a wonderful old-fashioned structure with old timber boardwalk, allowing ample gaps to see the water between the planks. Some planks felt quite rickety underfoot, too (though no sign of the indelible ink mentioned by Norman McCance in the 1950s). 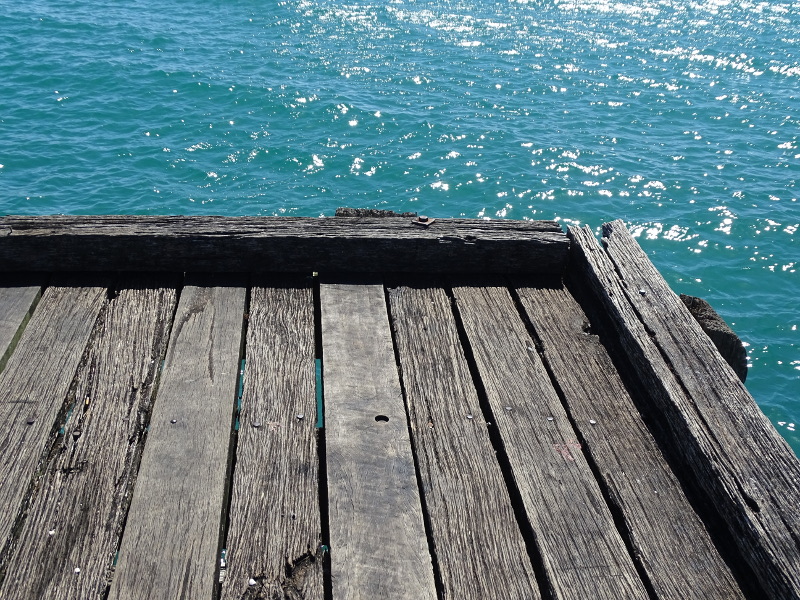 It’s a simple straight pier reaching out about 200m into the bay, with an arm heading off to the right at the end. 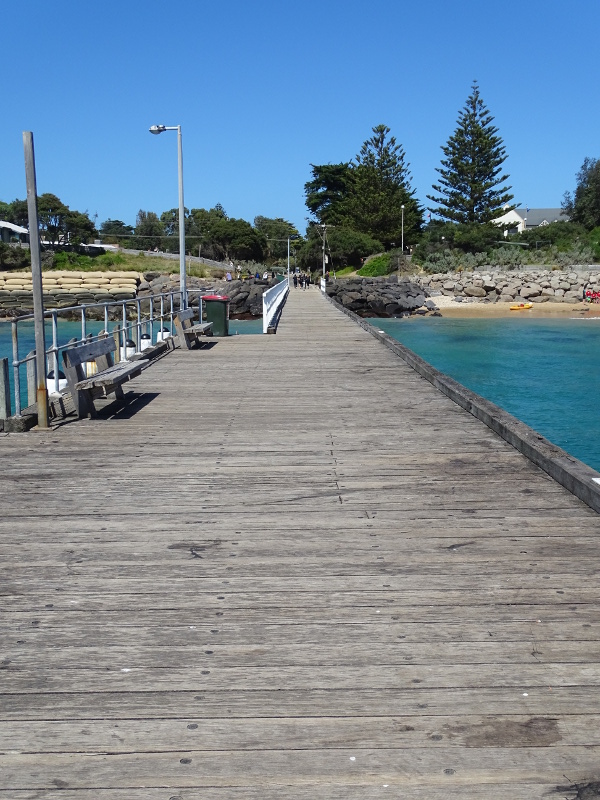 After the initial 75m or so, Portsea Pier opens up to be quite a wide walkway, though apart the occasional mooring iron and some steps down to the water, there is no real adornment to this stretch – just a couple of benches, one either side of the pier so you can choose whether you want to face the wind or the sun at any given time. 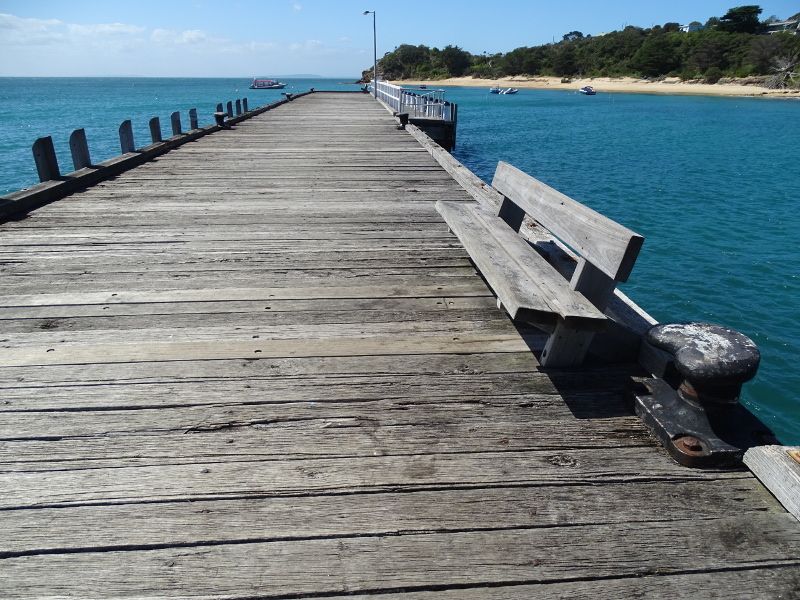 Along the 100m stretch of the right-hand arm, there are two more benches. 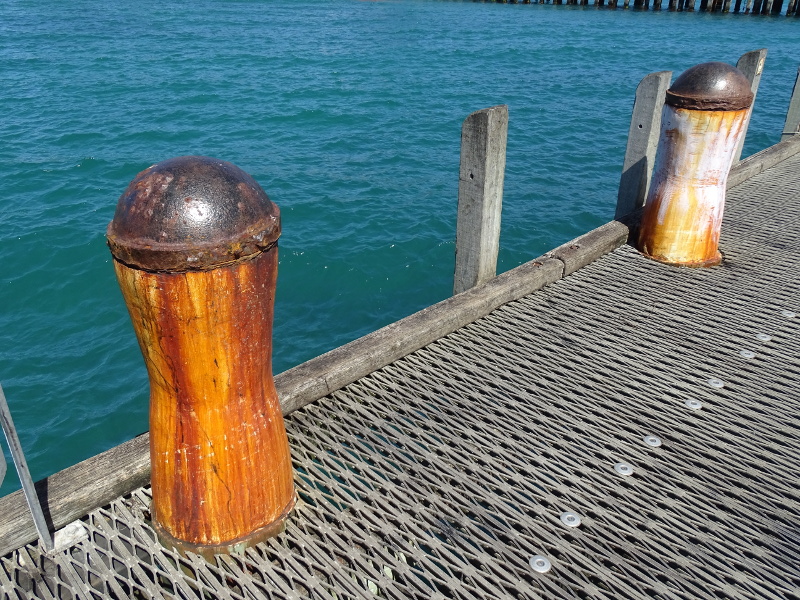 I also rather liked the line of mooring irons on the lower level, with some more rusty than others. 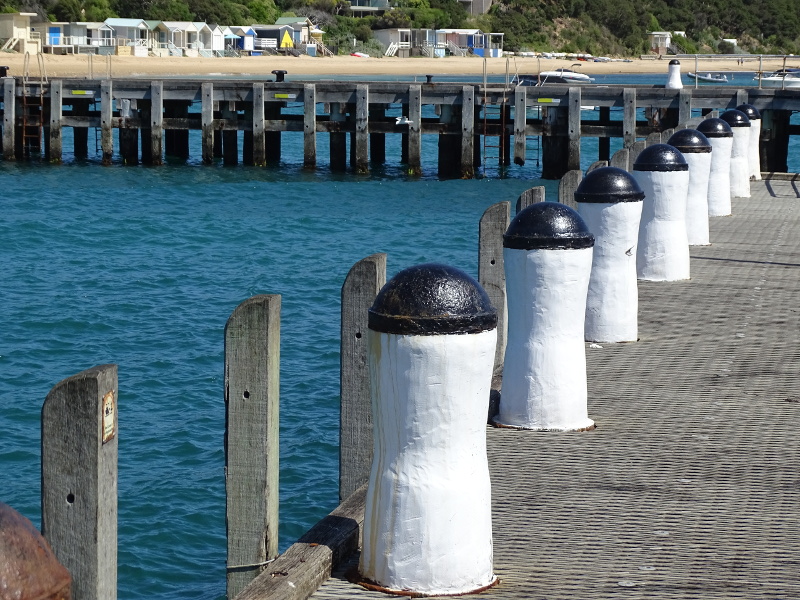 Looking back along the beach at Portsea, there are more of those colourful beach huts so popular along the Mornington Peninsula. 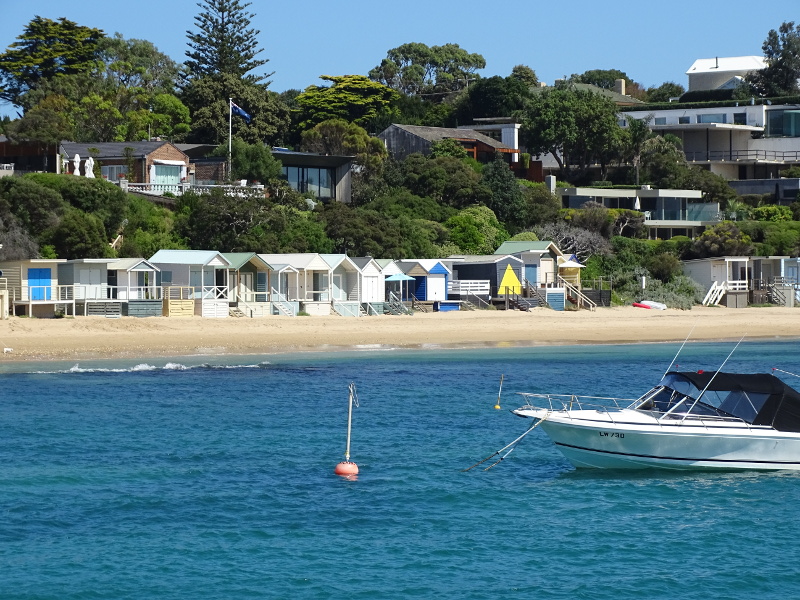 And anchored in the waters beside the pier and in front of those huts are lots of small sailing boats and dinghies, this is of course the summer playground for many Melbourne folk.

Unlike most piers in Victoria visited for this site, there was no fishing going on at Portsea (but maybe that reflects the demographics round here as much as the fish…). But as piers go, it’s a good one for a blow, or a stroll to take in the air.

I wonder if it still gets as crowded in summer holidays as it did 100 years ago (picture from The Argus newspaper via Trove database). 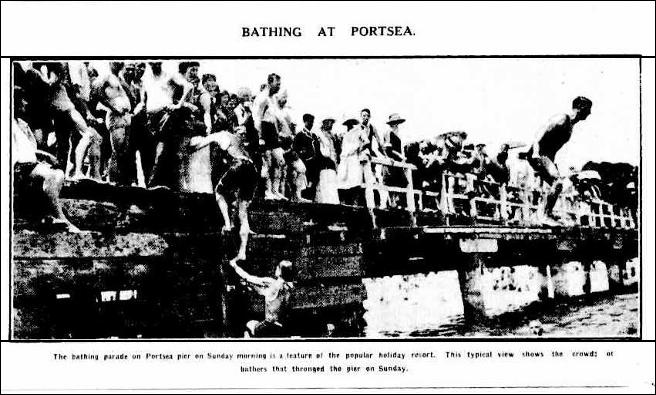 Four benches but no shelter along the pier at Portsea. Parking quite limited near the pier, though not a problem outside the holiday season.

Nearest toilets and showers are on the public reserve just inland from the pier.

History and stories about Portsea Pier

The first mention of Portsea Pier (or Jetty) in the Trove database comes from March 1874, when a small boat got into trouble near the pier, causing alarm in the town. Two telegraph operators from Queenscliff were bringing over to Sorrento some technical equipment, when a gust of wind blew the boat off course and it filled with water. One dived in fully clothed and made it to shore after a struggle. The other stripped off, but by then the boat had been caught in the current and was getting further from safety. From the pier, a crowd watched as every wave drenched the remaining man more and more and the rip took it further out. One of three rescue boats finally made it to the stricken vessel, and both men survived, though presumably not the telegraphic equipment…

In 1877 a collision occurred after a steamer heading from Portsea Jetty to Queenscliff ran into another its way over from Sorrento.

1882 quarantine grounds were near the jetty; a crooked path led from the jetty to the area.

A smallpox case being transferred from quarantine to Melbourne caused alarm for those walking on Portsea Pier one afternoon in 1882, and the captain of the boat designated to take the patient and her belongings refused to allow her possessions onto his vessel. Such was the stigma attached to small pox still at that stage.

Storms in September 1883 saw waves crashing over the pier at Portsea. The steamer Queenscliff, with passengers on board, tried to leave the jetty but was blown onto the beach. Passengers were all led to safety as the boat took on water while stranded.

In 1894, a man whose job it was to tie the steamers up to the pier and lay the gangplanks, had a seizure as he began his work on the vessel called ‘Ozone’. He tumbled into the water, and was rescued by one of the Ozone’s officers, who not only threw himself into the water to save the man, but then, to the cheers of onlookers, proceeded to complete his landing, even while still wearing his dripping and sodden uniform. It was the officer’s first day in charge of the Ozone!

An experienced swimmer and member of the Port Melbourne Yacht Club dived into the water off Portsea Jetty in December 1897, but he misjudged the depth and his head struck the bottom, breaking his spine. He did not survive the accident.

May 1900 saw the Sierra Nevada wrecked near Portsea. A grim few days followed as bodies kept washing up on the tide. Parts of the cargo were salvaged, with Portsea Pier being used to load the cargo onto boats for shipping to Melbourne. Two weeks after the incident, 200 barrels lined up on the pier, containing all sorts of goods from sheep dip to oil, paper to vinegar, and a fair quantity of alcohol.

The local council began by 1905 to be very vexed by men bathing naked off the Portsea Pier. One councillor described it as a ‘disgrace to civilisation.’ Such was the strength of feeling that some proposed all males from age 12 be barred from swimming within 100 yards of the pier from sunrise to sunset, and it didn’t matter if they wore bathing suits or not.

I’m not sure how much impact that council discussion had in light of a 1912 letter published in The Argus newspaper, complaining about ‘reprehensible’ behaviour on Portsea Pier, where people of all ages from 12 to 60 were running up and down the pier ‘perfectly nude’, and diving into the water. “No woman could walk on the pier during daylight,” the correspondent claimed…

Certainly, diving from the top railing of the pier, and from a springboard which seemed to be in place through to the late 1930s, was a popular pastime in Portsea. It was quite a draw also for Melbourne’s social set, with talk of it being Australia’s equivalent of the Lido near Venice, or Ostend in Belgium.

In 1929, a gypsy moth plane had been doing pleasure flights over Portsea Pier, when it struck a telegraph pole and came down on a verandah and shop in Portsea. Remarkably the pilot and passenger came away unharmed, but the plane was destroyed.

Writing in 1951, one Norman McCance remembered fishing for squid off Portsea Pier 50 years earlier. He reckoned the ink the squids squirted was so indelible that it might still be staining the planks at the sea end of the pier (I also learnt that this black ink turns brown when exposed to the sun, and that the squid were deliberately left to dry on the pier because that was how sepia ink was produced back in the day)

For once, Trove had a story dating from a little more recent times than many. In 1970, two teenagers from Melbourne, John Eadie and Mario Yudorovic, were swept out into Bass Strait by winds and current. They were rescued in their dinghy by a pilot ship, which brought them back to Portsea Jetty. They’d both be just 69 now, so may well be alive still to retell the tale?

And Trove even had more recent stories mentioning Portsea Pier. In 1995 Australian endurance swimmer Tammy van Wisse set out from the pier in an attempt to swim round Port Phillip Bay, a total of 140kms. She started out in warm weather and calm seas, but some 19 hours later bad weather and rough seas meant she struggled, though she nearly made it, being pulled out of the water just 5kms from her return to Portsea Pier.

Other links and writings on Portsea Pier

Thanks to this GoinFeralOneDayataTime blogger for posting on the ‘Millionaire’s Walk’ from Sorrento to Portsea, with lots of private piers on the way.

I also liked this TellingStories blog about snorkelling near Portsea Pier.

Points of Interest have some interesting material on Portsea Pier.

This 2007 story in the Sydney Morning Herald tells the story of the artillery shells found near the pier that year.

What are your stories and memories of Portsea Pier?

Does anybody have any good stories to bring the history of Portsea Pier up to date?

Does anyone know if John Eadie and Mario Yudorovic are around to retell the tale of their adventure from 1970?

Was anyone there to see Tammy van Wisse set out on her round the Bay swim in 1995?

Or just get in touch if you have a favourite memory of your own from a visit to Portsea Pier.