There’s been a pier or jetty at Portarlington on the Bellarine Peninsula since 1859. The current pier is a recent arrival but has traditional boardwalk, with distant views across to Melbourne’s CBD.

One of the stories I read about Portarlington Pier from the past concerned a girl who lost control of her bike and sped down the hill onto the pier. I don’t think anything nasty happened to her, but you can kind of see how the problem arose as you swing down into Portarlington on the main road from Geelong. 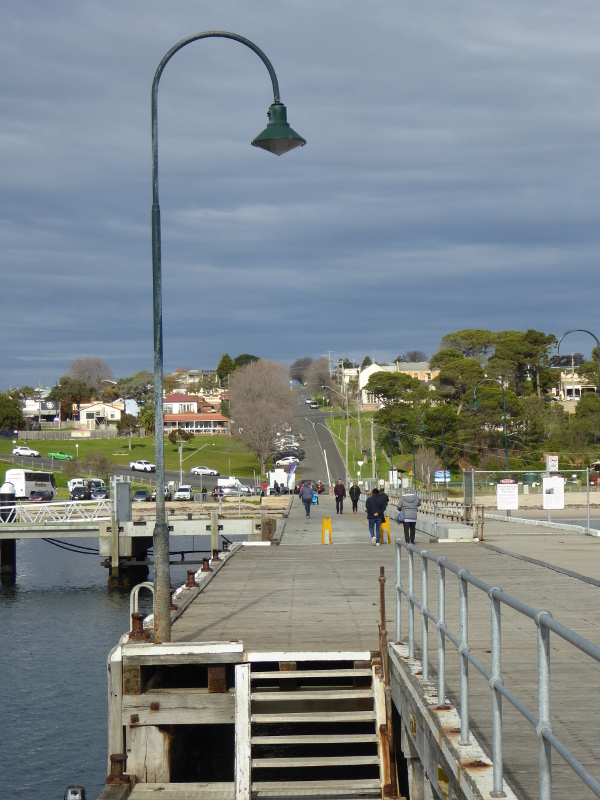 Portarlington Pier stretches out into the bay, protected now from runaway pedal bikes by a car park, but it’s a nice sight to see as you enter the town.

There appear to be two piers running side by side at the moment, but there are big signs up and a fence stopping you from entering the left hand pier, which is defined as the ‘old’ pier, and is apparently condemned to death by concrete cancer even though only built in the 1970s. 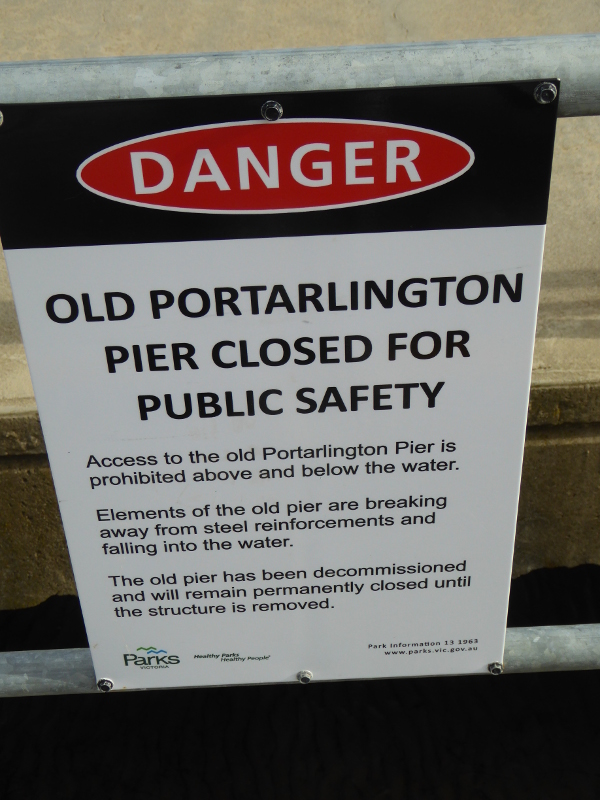 The right hand ‘new’ pier seems also to be made of concrete, so at first I wondered whether I should be reviewing it at all given that I had rejected Brighton Pier for now since it has absolutely no boardwalk anymore. But 100m+ along Portarlington Pier and we did find a good section of wooden planked boardwalk. You may not be able to see much sea between the timbers, but this is what constitutes a pier in my book, so Portarlington Pier got the green light for Vintage Victoria, even though I’m not sure any of what stands today as the pier dates from the original 1859 jetty. 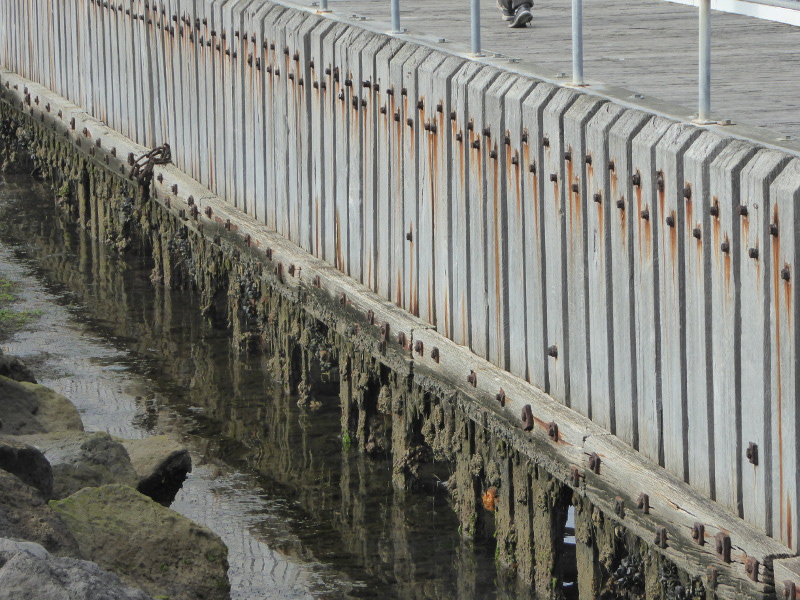 Portarlington Pier these days runs along two sides of a square that forms the shape of the protected harbour of Portarlington, with a 500m long breakwater wall winding its way further on to increase size of the calmed area and give a nice blowy spot for walkers (or fishermen). 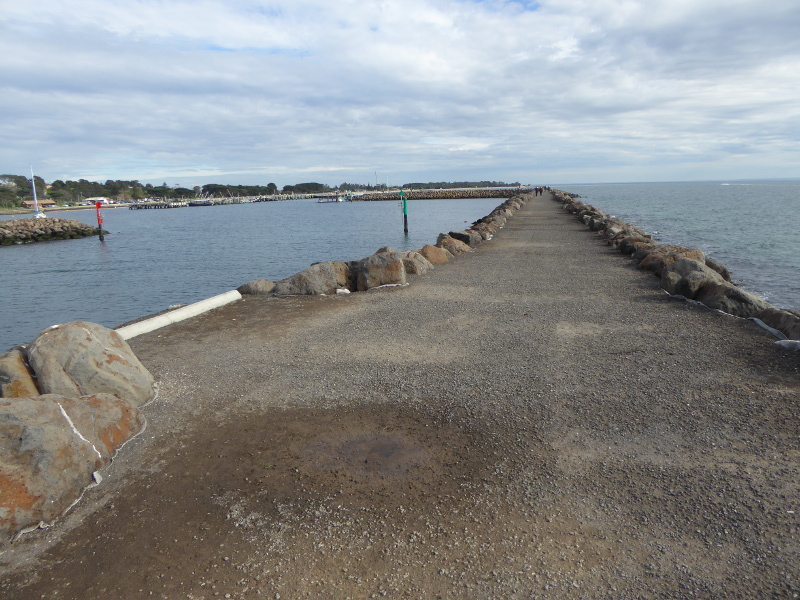 There’s a vintage looking covered bench just at the point where the pier changes direction to head east, with seats facing back into the harbour and out over the bay. 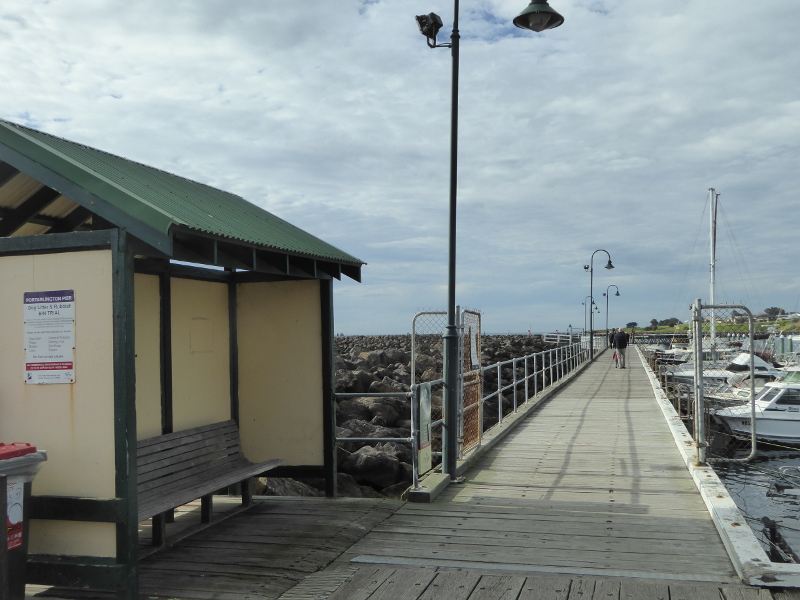 And there’s more seating – on concrete slab-like benches further back towards shore at the end of the concrete section of the new pier. 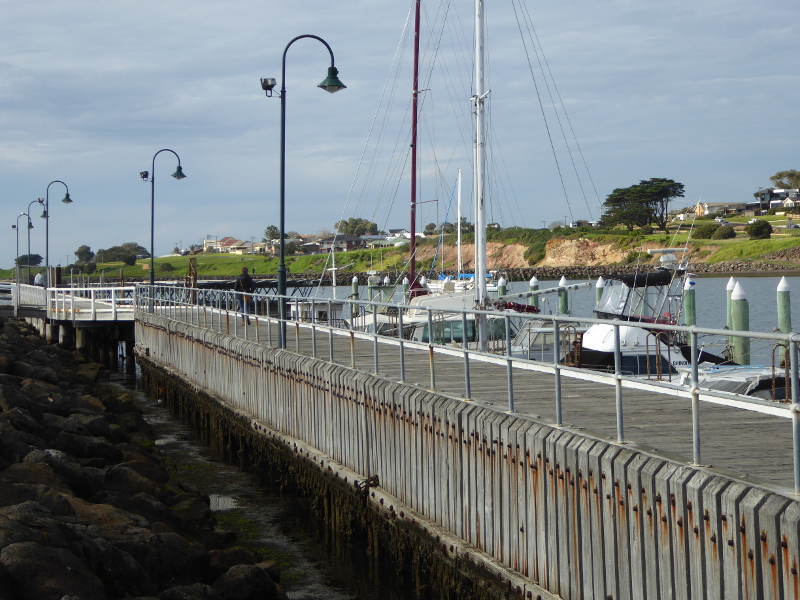 So lots of resting places for people making a walk of their visit to Portarlington Pier – and it is quite a walk from the shore to the very far end of that breakwater, maybe even up to 1km one way, so for some that would make a decent bit of exercise. 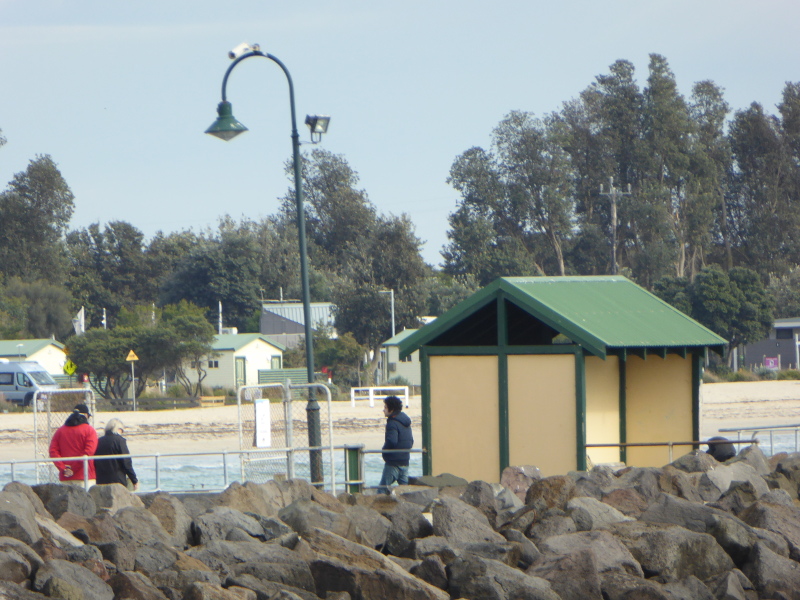 There was the usual good mix of people out for a stroll this overcast winter’s morning – an interesting mix of languages being spoken: some Latinos chattering away in Spanish; some older guys talking some sort of East European lingo; and the Vietnamese fishing off the side of the pier, comparing their catches. 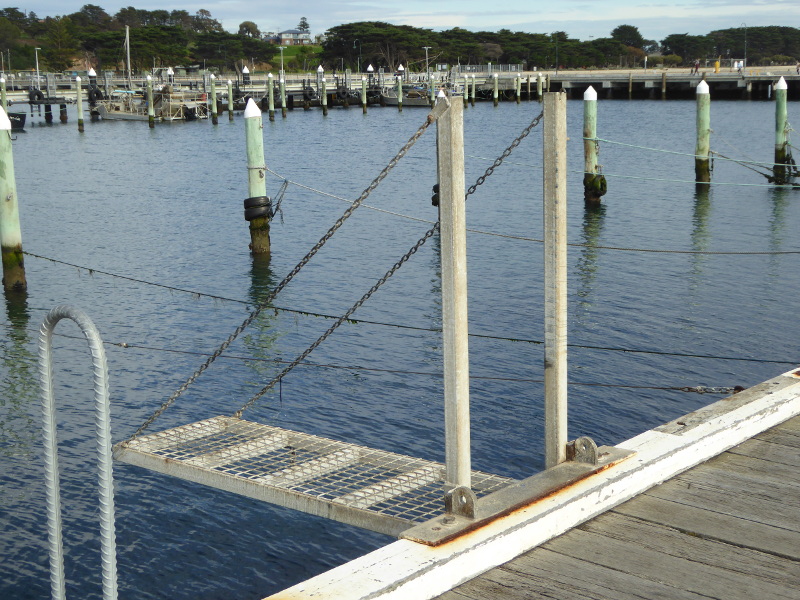 Now that Portarlington has a proper marina, there are these metal planks we had seen down at Williamstown for people to walk over to their vessels. This one looked primed for some ne’er do well to walk the plank, though the young teenage girl we saw disembarking with her granddad later skipped off onto the pier without any thought that the walkway might be narrow or dangerous.

I really enjoyed the views out over the water from Portarlington. There’s nowhere else on this Vintage Victoria trail where we had this distant perspective on Melbourne’s CBD. 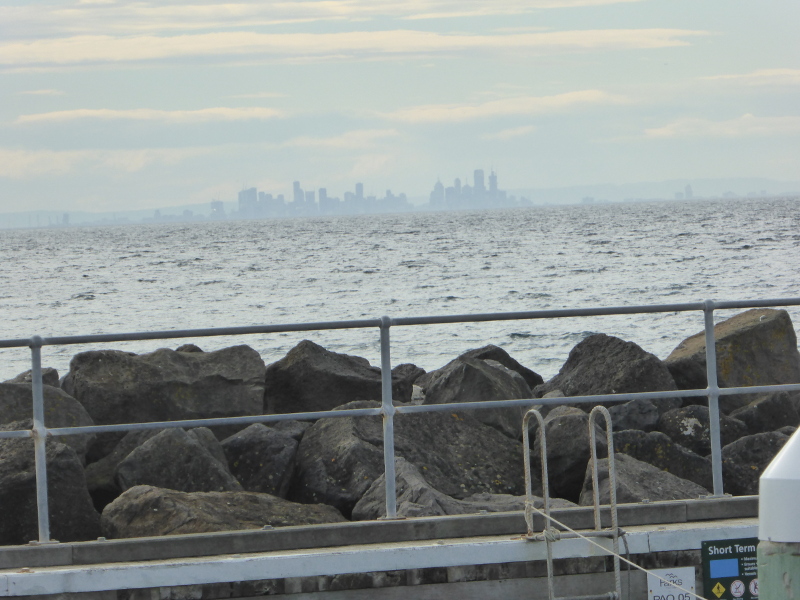 And I really liked the volcanic looking hills which must be somewhere near Avalon Airport, I guess – or correct me if I’m wrong and you know which these hills are? 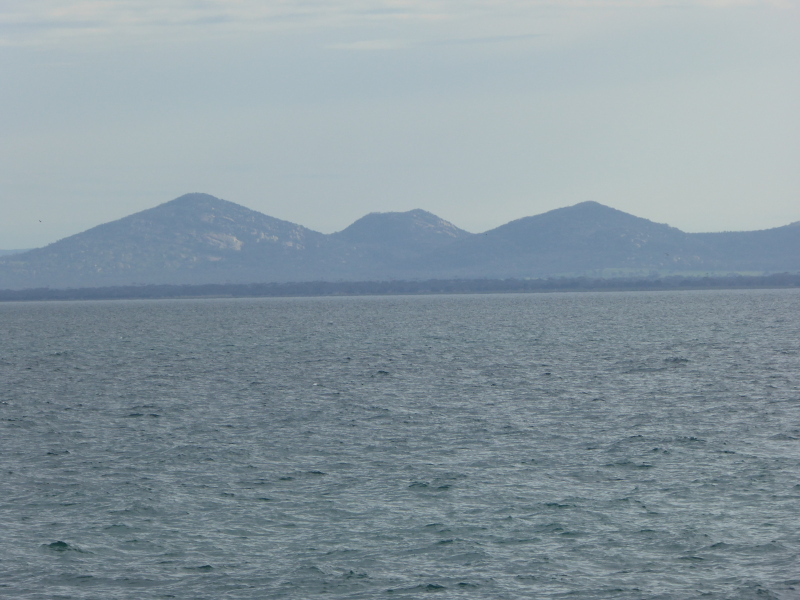 There was the odd speedboat dashing past and then the ferry arrived from Melbourne, looking all sleek and modern, but probably on a run not dissimilar to the journeys made over 140 years ago by steamers like the Edina. 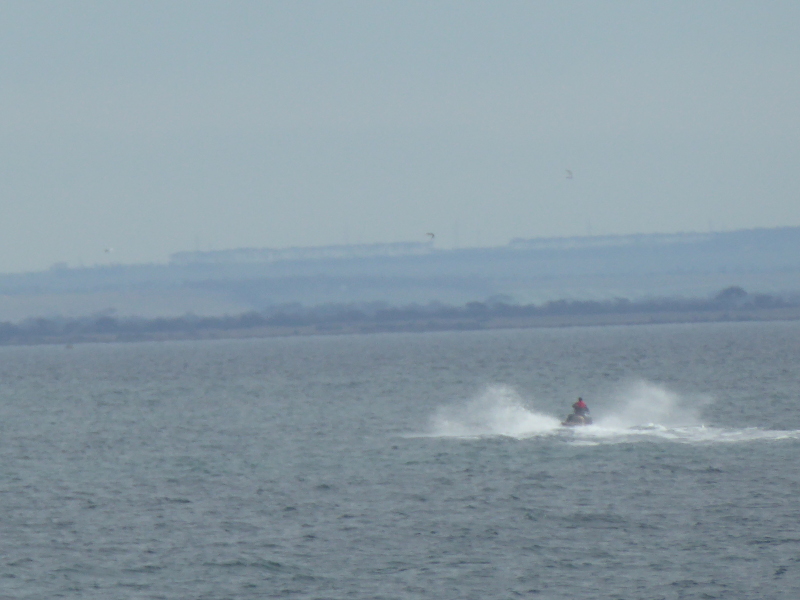 Right at the end of the pier itself, where the breakwater starts, was an enormous cataraman, which we slowly realised was actually a helipad, presumably needed to assist in any sea rescues carried out near here. 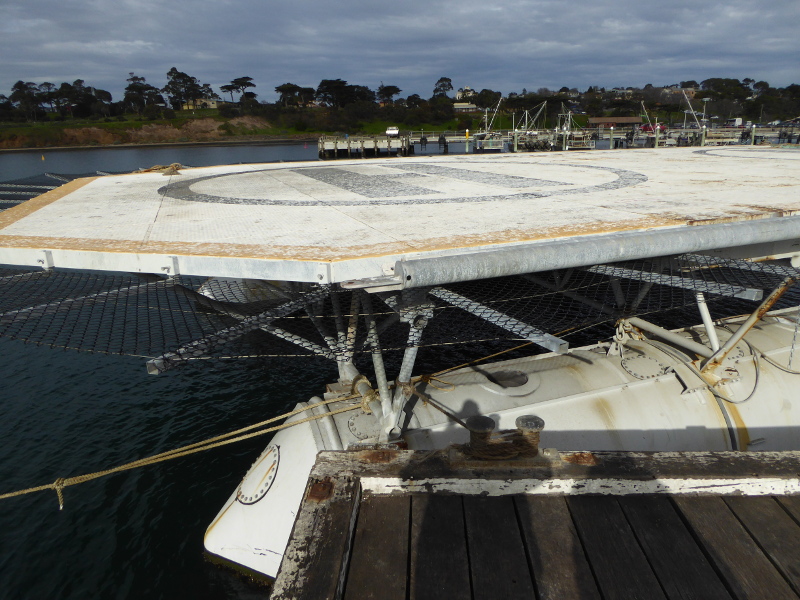 I loved some of the barnacle-covered wooden piles on Portarlington Pier, some of which looked pretty rotten and surely can’t be holding the pier up anymore? If they are, my god they may wake up one morning and find the pier has drifted off into the bay…Unless the stone breakwater keeps it in place actually? 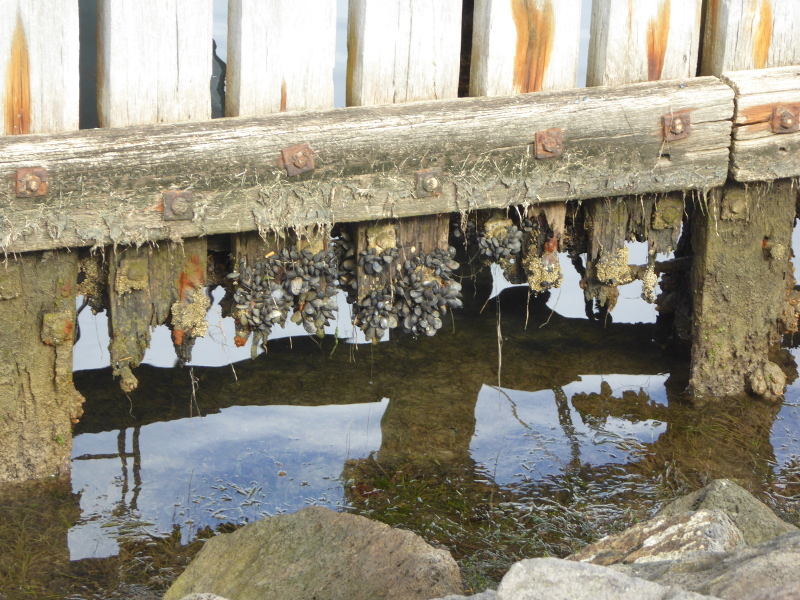 But I also just liked some of the lines formed by the various timbers posts that were dotted around inside the harbour at Portarlington. 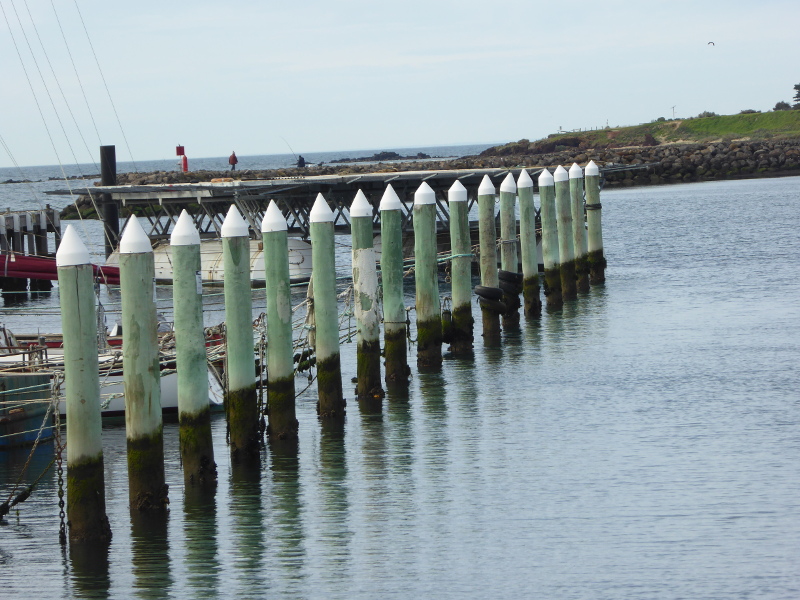 There wasn’t much wildlife to watch on this July morning: the usual big jellyfish squished its way past us, some elegant sea birds as ever, but no signs of whales or the great shoals of pilchards mentioned in one of my stories found on Trove.

But as piers in Victoria go, a very pleasant place, making for a peaceful promenade. Probably a bit different on a stormy day, as ever, but maybe slightly out of the way of the real swell that must come in off the Straits at other points round Port Phillip Bay. 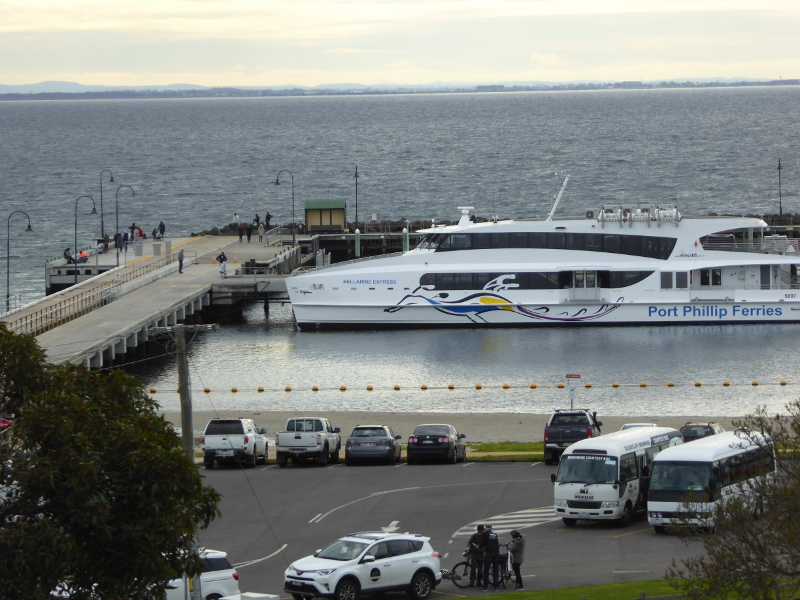 And we rather liked the views later on from the café we chose, up on the hill, looking down on the pier. They called the café the Waterfront Edina, named after the steamer ferry which used to come to Portarlington; and a local artist has drawn a rather lovely sketch of the Edina on the café wall, so that makes another good reason to stop off there before you head for home. 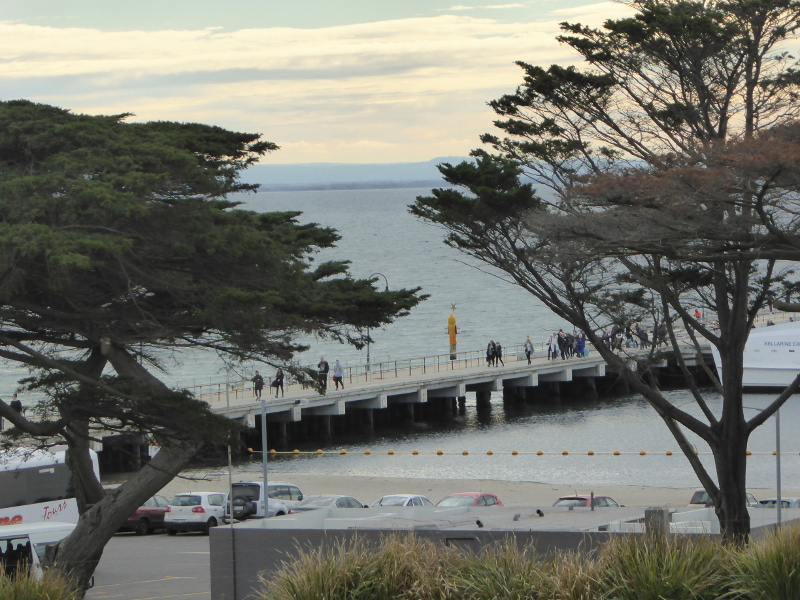 Benches both on the concrete section and in that nice vintage stage where the pier changes direction.

Ferries from Melbourne Docklands, twice a day, with a four hour holdover in Portalington, so very doable as a daytrip from the CBD. 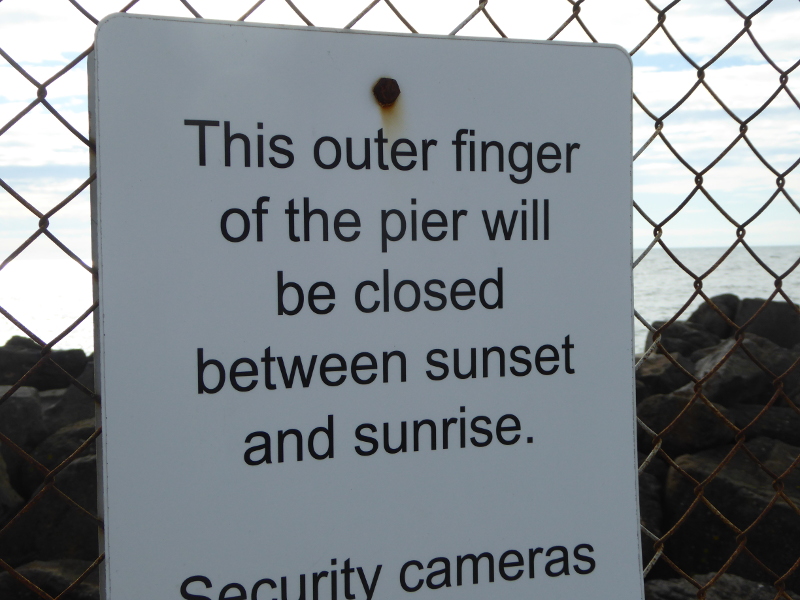 Mr Mussels sells his sea shells at the end of the pier.

History and stories about Portarlington Pier

The first pier at Portarlington was built in 1859, I believe, though the first reference on Trove is from five years later when maintenance costs were already being discussed in the newspapers.

By 1897 some of the boardwalk planks had become so rotten that a horse with a truckload of vegetables put a hoof through the wood and injured itself in the process.

At the turn of the century, the area had become popular for day trippers arriving by steam boat or by train to Drysdale, with the Cobb & Co to Portarlington. There were the sulphur baths at Clifton Springs and there were shark-proof swimming baths by the pier in Portarlington at that time.

You had to mind your Ps & Qs in those days, though. One local resident was fined over 2 pounds for using obscene language on the pier in 1898! And two visitors from Melbourne were fined a shilling each in 1899 for bathing outside the permitted radius near the pier…

Fishing has always been a popular pastime at Portarlington Pier. In 1901, the capture of thousands of pilchards made the news for a few days, as did the sighting of a whale which was probably after the same catch! When more pilchards appeared by the pier a few days later, local shopkeepers got together to send the fish to Melbourne to ‘feed the poor’ – I wonder how they worked out which poor were right for pilchards?

Rats were a problem on the pier back in 1905. The plague was still a threat back then and the local Council was offering 3d per head for any rat destroyed on the pier at the time.

In 1906, just after Christmas, tragedy befell the daughter of the Victorian Attorney-General, when the fishing boat she was in with three friends capsized. The others survived by clinging to an oar, but she drowned.

It’s easy to think of mindless vandalism as a modern-day phenomenon, but it was already present in 1913. On one winter’s night, a lifebuoy was thrown out to sea, fishing nets were cut away and cast out into the water, and railings by the ticket office on the pier were torn up. The Argus labelled them ‘larrikins’, showing that the term used these days as a kind of affectionate description for roguish but harmless behaviour used to signify something rather more sinister.

On a brighter note was the story from 1932, at the height of the Depression, when the steam ship owners banded together to provide boats for 1000 unemployed and their families to escape from Melbourne for a day trip to Portarlington. The police had expected some trouble, but everything went off smoothly and it must have been a wonderful brief respite for those troubled times.

Other links and writings on Portarlington Pier

This Places of Interest Australia entry on Portarlington Pier has great early history of the jetty with some lovely historical pictures of the pier, showing the hill road leading direct onto the pier, the sheds, the ticket office, and the rail tracks that ran along one early version of the pier.

This timeline on Portarlington history puts the building of the first jetty in 1859 into context.

Pete’s diving blog is great for pics of what’s under the pier!

I rather liked this 2012 YouTube video of a walk on Portarlington Pier, as it is on the ‘old pier’, with no sign of the new one running alongside, or of the harbour really in place yet.

And the Geelong Advertiser newspaper in 2015 had a report on what the new Portarlington Pier might look like – not bad guess, but spot the difference in the position of the lamps…

What are your stories and memories of Portarlington Pier?

Does anybody remember the old Portarlington Pier that must have pre-dated the 1970s one, which is now called the ‘old pier’?

What has been your favourite memory of times spent on or near Portarlington Pier?

Does anyone know the vintage of that sheltered bench on the pier today?

Do you just have good memories of a romantic stroll, a fishing trip, or maybe a holiday visit that involved a visit to the pier?

There is a cafe on the reserve next to the pier but it was closed on the day we visited. But we were rather glad because it gave us the chance to discover the wonderful Waterfront Edina Cafe halfway up the hill above the pier. Great views down on the pier itself, but also a really nice connection to the Edina steamer ferry which used to serve Portarlington more than 100 years ago, with 58 years of service in all. They do fantastic coffee and tea here, the cakes are great, and there’s a not-to-be-missed drawing of the Edina on the wall of the cafe. Sorry it was too busy in there for me to take a photo, so you’ll have to make do with the story of the steamer on the cafe menu… 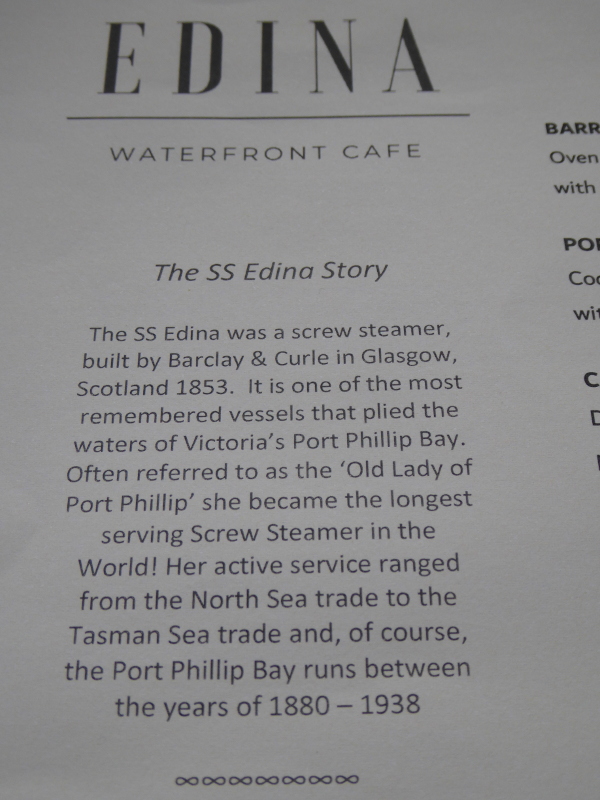