Today’s Fisherman Jetty at Port Welshpool with timber boardwalk dates from 1859. The kilometre long ‘Long Jetty,’ first built in 1938, is now an impressive modern pier, but has kept its iconic curve

The historic long jetty at Port Welshpool even gets its own brown tourist attraction signpost on the main road 10kms away. It is a pretty magnificent structure, but it only just made it onto the Vintage Victoria website, as the current pier is a total rebuild completed in 2018, and very little remains of the original jetty today. 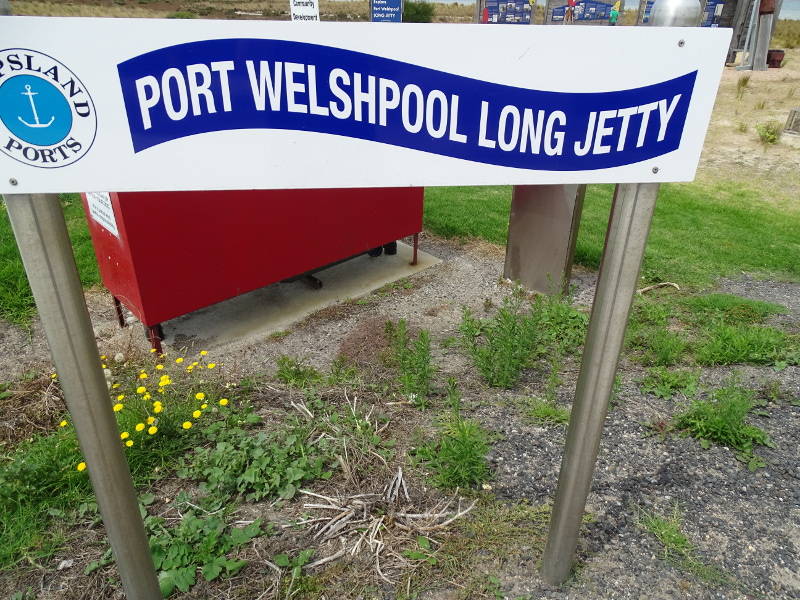 I’ve included it mainly because it is such a unique entry under piers of Victoria, but also because in doing the rebuilding work, they have made sure to put up as many information boards as possible to tell the story of the long jetty in its entirety. Port Welshpool is a tale of two jetties, though: the Fisherman Jetty, about a kilometre up the bay, is actually older than the long jetty, and has kept its boardwalk, with a distinctly older vintage feel even today. There is no historic signage at this second jetty, though, and the authorities cheated slightly, with one board on the longer jetty telling a story of a shark incident from 1914, which must have taken place on this fishing jetty since the longer jetty was still 20 odd years away. 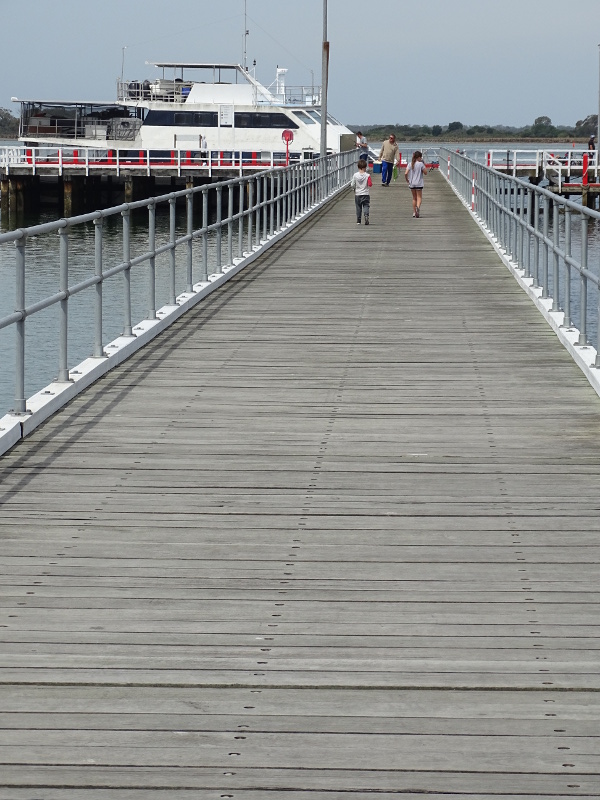 Having said all that, Port Welshpool is definitely worth a visit for anyone who loves just to walk along a pier.

I began at the Fisherman Jetty. 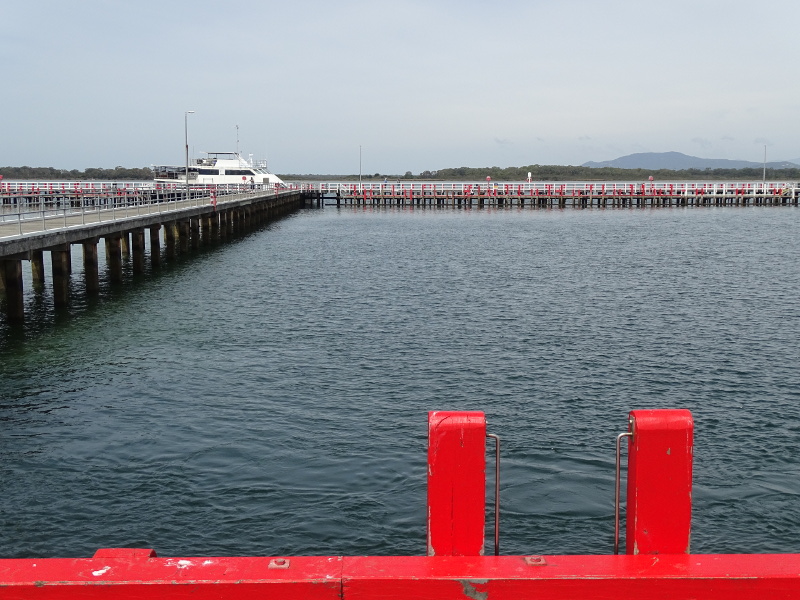 The ‘Old Ferry Terminal’ certainly isn’t used for ferries anymore. I think there used to be a service to Tasmania from here, which ended in the 1980s or 90s. One rusty old boat is still moored at this jetty and might indeed once have been a ferry, but this jetty looked to me like a place dedicated these days to fishing. 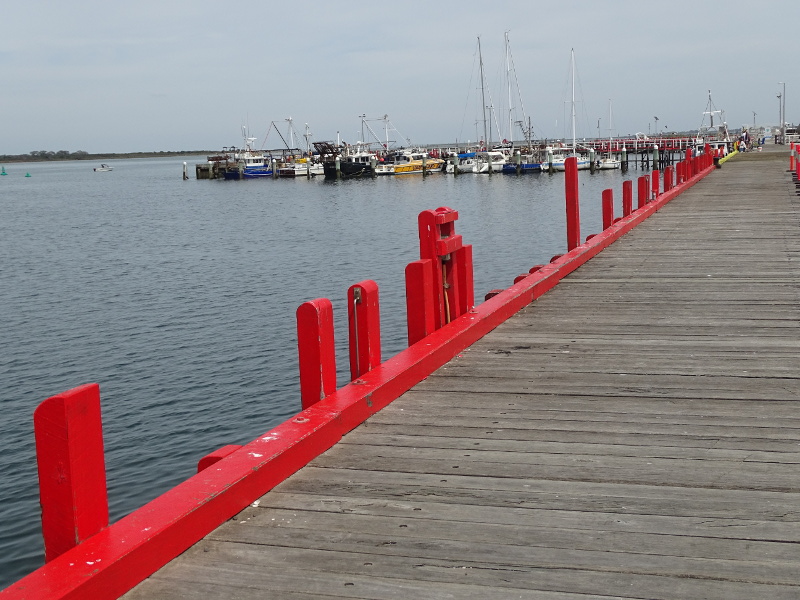 The boardwalk on this jetty stretched a good 200m out into the bay. 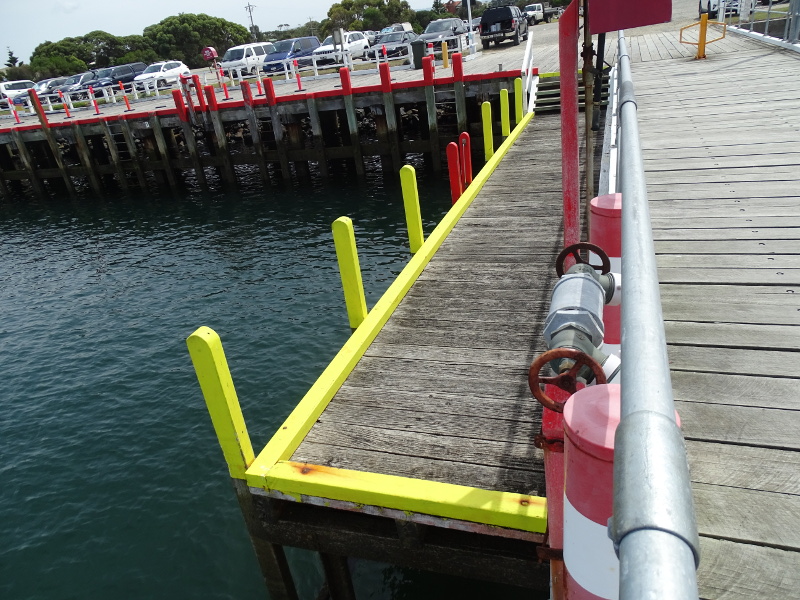 The water looked clear, with stingrays gliding through a depth of about 1.8m under most of the pier. 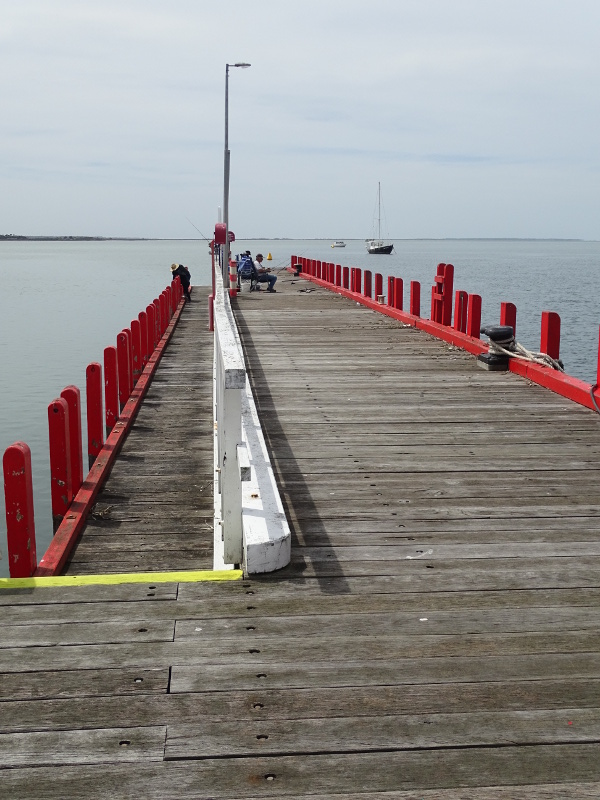 The posts lining the edge of the pier and its walkways had a colourful spark to them, combining red, yellow and white. I’m guessing this has some sort of safety or nautical function, so if anyone reading this knows why, let us know below, but it looks attractive in the bright sunshine of this February morning.

Fisherman Jetty forms a kind of T junction, with a cross section of about the same length running parallel to the shoreline. 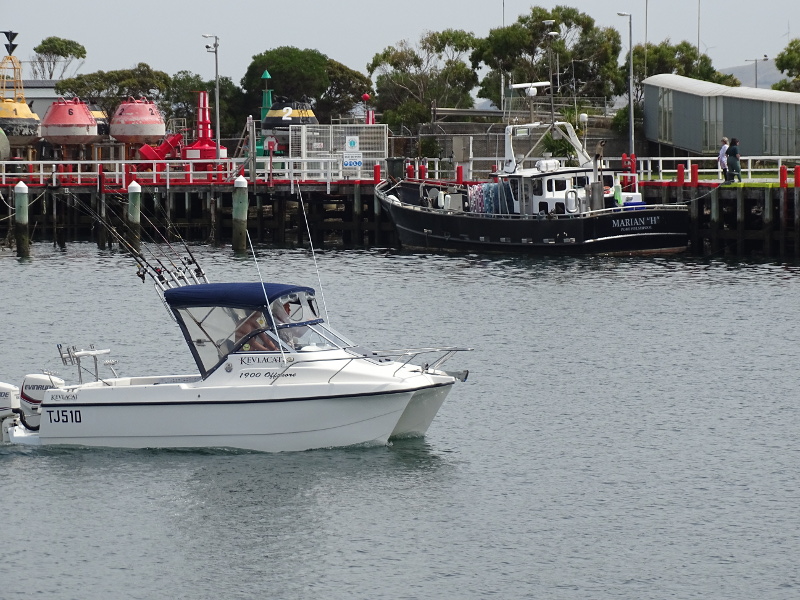 There were a handful of people out fishing off this jetty, a couple of speed boats rushed past, and one came in close to drop off a passenger who leapt onto the lower level to disembark.

But this was a really tranquil place, not even a dog walker or Sunday promenader to be seen, and with absolutely no signage apart from the jetty’s name, I really got the impression they don’t want people wandering round here that much.

On its own, though, it would have been a perfectly good entry for the piers section of the site, especially as for more than 70 years, this was the main jetty at Port Welshpool. So, any stories below dating from before the 1930s would have taken place on or near this jetty. You can see the long jetty in the distance from the Fisherman Jetty. It is a little over a kilometre away, and itself stretches almost a kilometre out into the deeper waters. 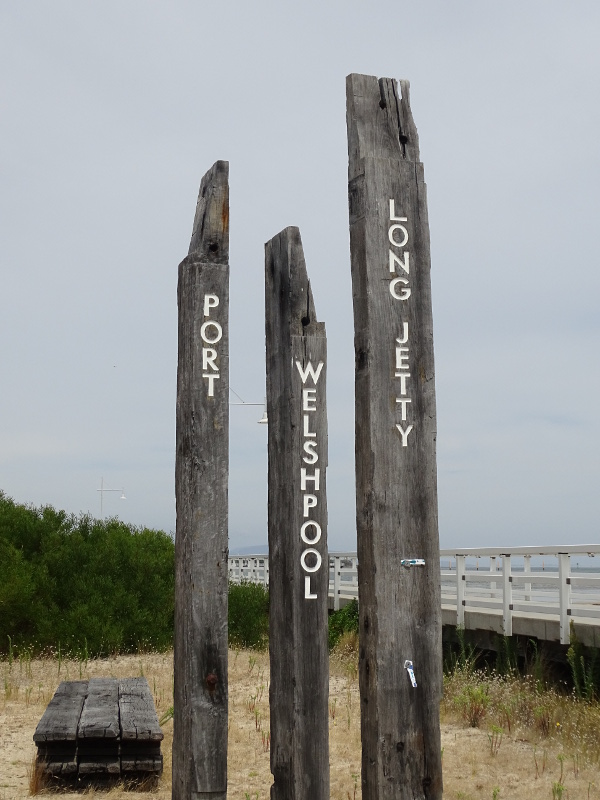 What’s unique about the long jetty – and the new version follows exactly the path of the original 1930s structure – is that it curves around. The information boards tell us it was the only curved wooden jetty in Victoria. 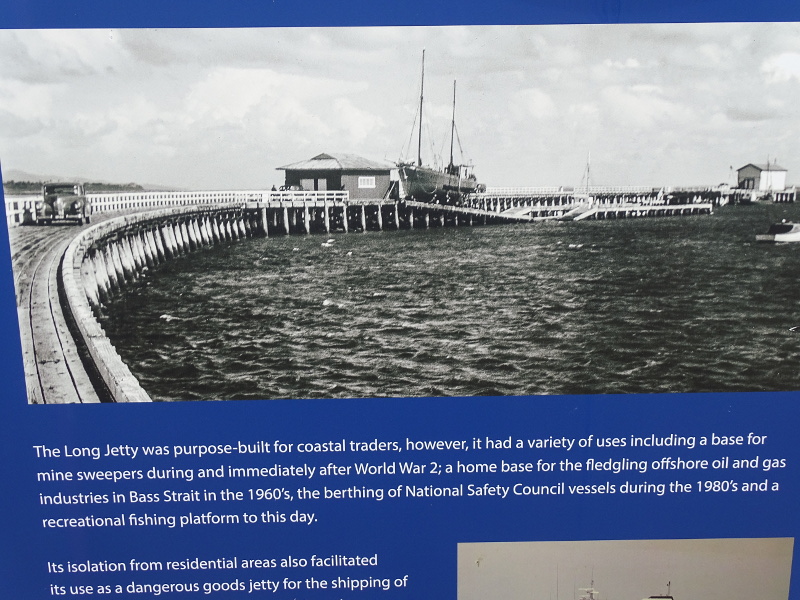 If, like me, you like piers for their wooden boardwalks, you might at first find the long jetty a bit clean and concreted. But check out the information display on the sand by the entrance to the jetty, because this is all mounted on some of the jetty’s original boardwalk planks. 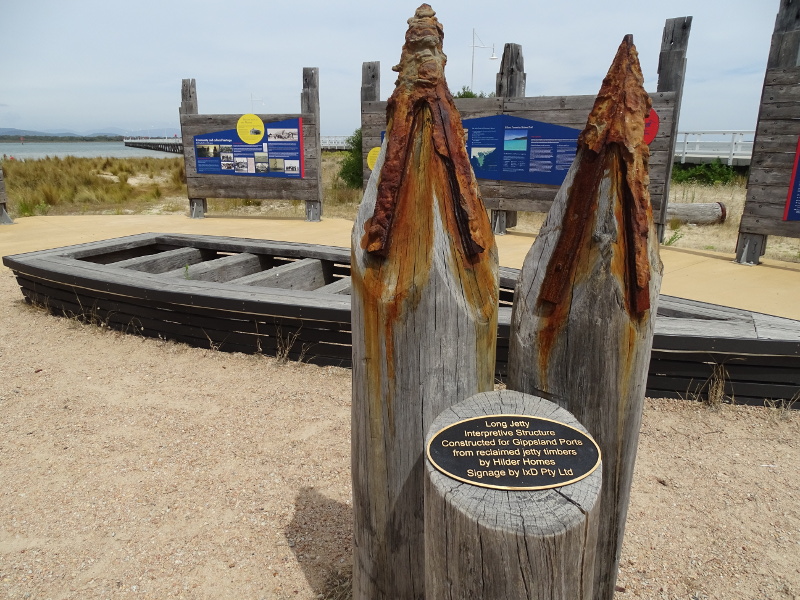 And it’s a good display, with stories from the original owners of the land, through construction of the jetty, to tales of how it almost didn’t survive, closing as a pier for boats in 2003, and then being largely destroyed by fire in 2010. And some of the old piles that survived the fire were eaten away by the same worms that had got to the fishing jetty up the bay. 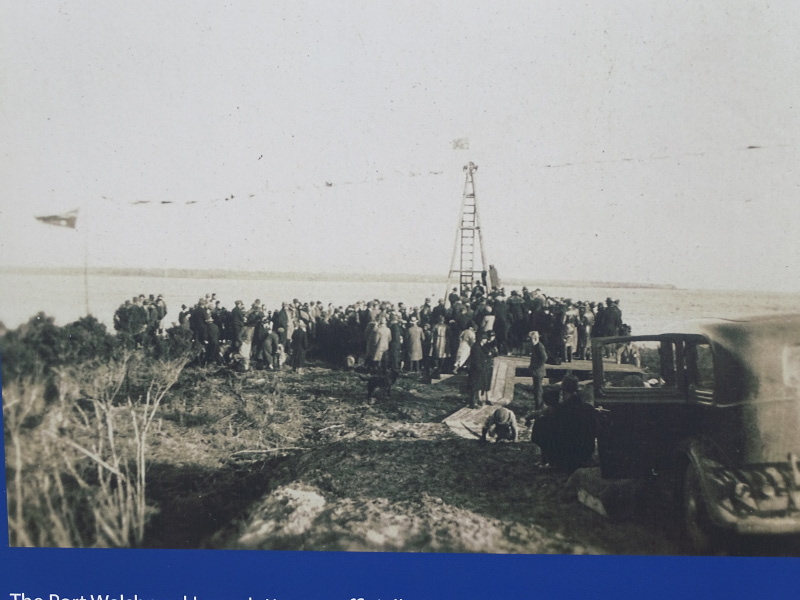 So we are very lucky to have the long jetty back. Even though it is not quite as long as it used to be, there are yellow markers in the water beyond the end of today’s jetty to indicate where the original structure extended to. 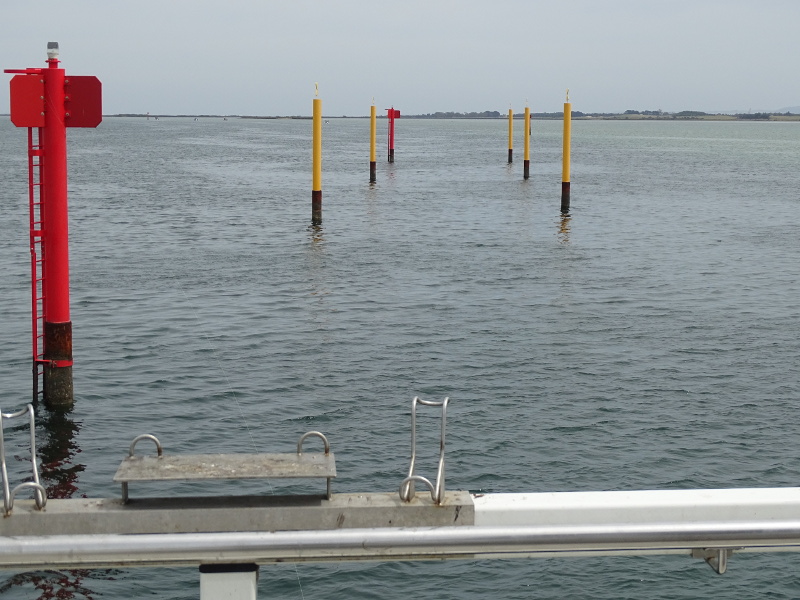 The long jetty today has a solid, smooth concrete path that curls around from the straight start to the right. A cyclist rode past me as I began my walk, and I was thinking what a smooth ride that must be now compared to the bumpy ride over pier planks before. 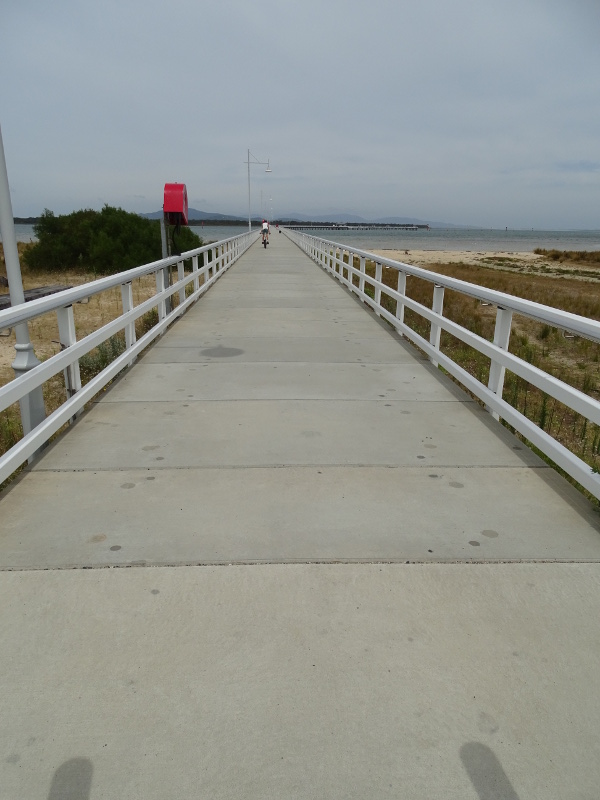 There are benches every 150m or so. 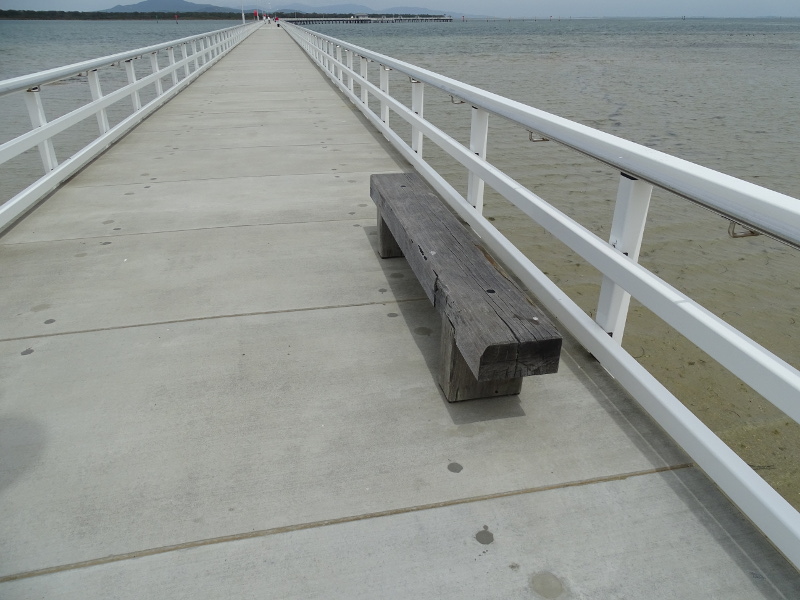 And if you are caught in a sudden storm or shower, there is a shed just beyond half way. Again, they used some of the old timbers from the original shed here to frame the 21st century version. There’s no slipway these days, but they have kept in place the old winching machine that would help haul boats up to land. 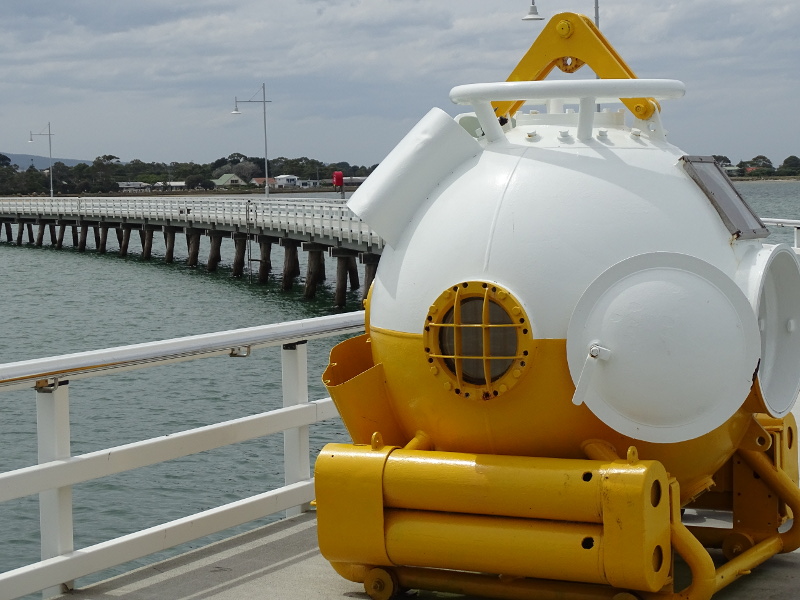 I also quite liked the old diving bell that stands next to this shed. Peer inside to see the two little seats divers would sit patiently on while they decompressed.

There’s a fair bit of fishing activity off this jetty, too. Not being a fishing man myself, I have no idea what would draw you to this jetty rather than the Fishermen’s Jetty, though I quite liked the thought that there are sea horses swimming away under the longer jetty (again, thanks to the information boards put up all over this place). 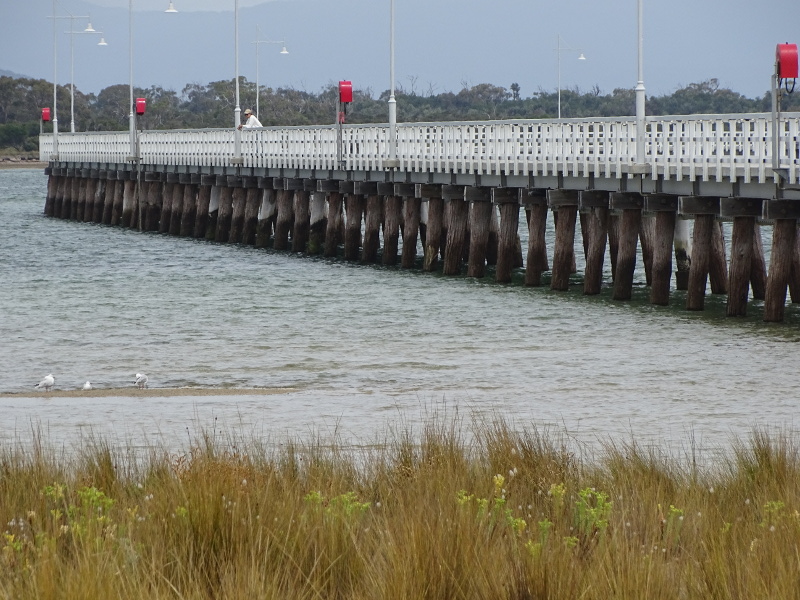 With no real vintage features remaining, there is little else to say about the experience of the ‘historic’ long jetty. It is a refreshing walk, though, and you do get to feel really far out over the water by the time you reach the end of the 900m or so of the entire jetty. I’m glad I came to Port Welshpool.

Toilets in the reserve near the Long Jetty.

The original Port Welshpool Jetty was built in 1858-9. It was damaged by fire in 1880, and then destroyed in another fire deliberately set in 1886. It took several years to raise the funds and have a successful contract drawn up and implemented to rebuild the pier. There was no grand re-opening, but it was not until five years after the fire that ships again were reported as landing at Welshpool. 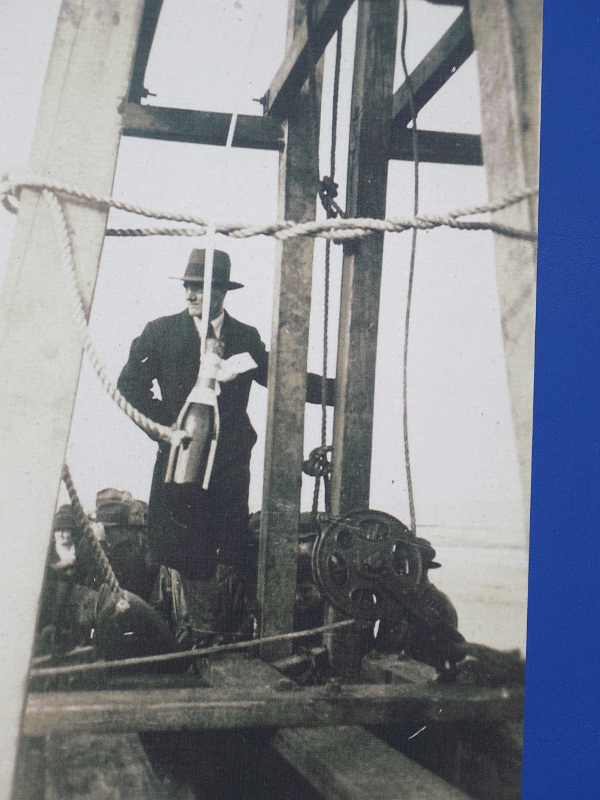 There were no reports of major incidents on or near this pier, either. A 13 year old girl, writing to The Leader newspaper in 1902 gave some idea of life near the jetty: “We live close to the Port Welshpool Jetty…You can see the boats coming into the wharf. Some of the boats have big hauls of fish. Sometimes ten tons of fish go away at the Welshpool railway station in one day.”

By 1928, there were reports of decayed planks, piles floating loose, and the pier infested with naval shipworm. But the discussion around repairs led in the end to a longer, deep-water pier being built in 1938, about 1500m east of where the original 1850s pier had stood. 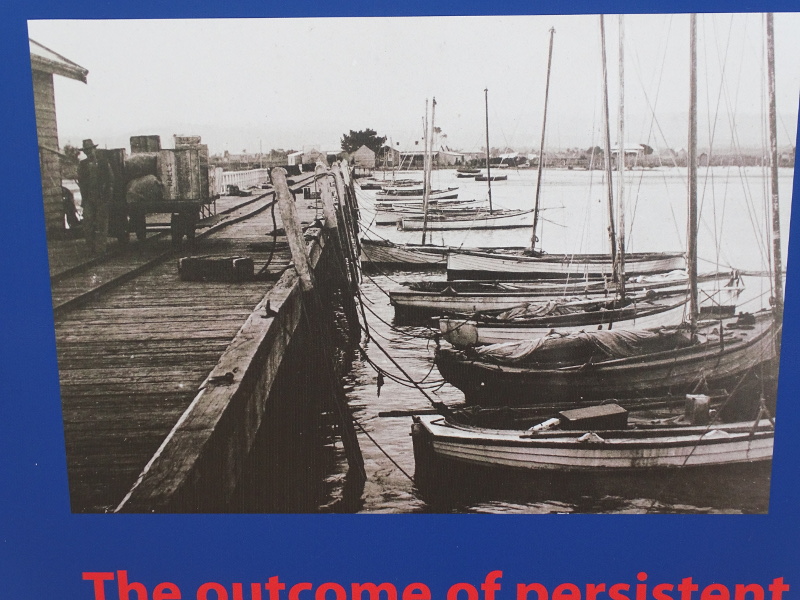 There was for some years a tram line from the jetty to the railway station at Welshpool, a distance of just over 3 miles. But with total takings of only 8/- (about 80c) in its last year of operation, it was closed down in 1940.

The deep-water jetty – now labelled the Historic Long Jetty – was built and opened in 1938.

The jetty played host to drama in June 1952, when ambulances waited on the jetty itself to ferry a teenage girl to hospital; she had contracted appendicitis, but was stranded on Deal Island in the middle of Bass Strait, where her father was head lighthouse keeper. Tanis Yuille was the teenage girl but she appears to have passed away in 2002 – I wonder if she ever told her kids about the dramatic rescue ending up on Welshpool Jetty…

There was more drama, and a tragic outcome, in 1969, when a vessel exploded while taking on board liquid oxygen at the Jetty. Three men were killed and 20 more injured in the explosion.

And disaster was averted when a fishing vessel coming in to moor at Welshpool Jetty in 1993 discovered that it had netted a WW2 navy depth charge full of explosives. The trawler turned tail and waited out to sea for a bomb disposal unit to arrive and make the device safe. 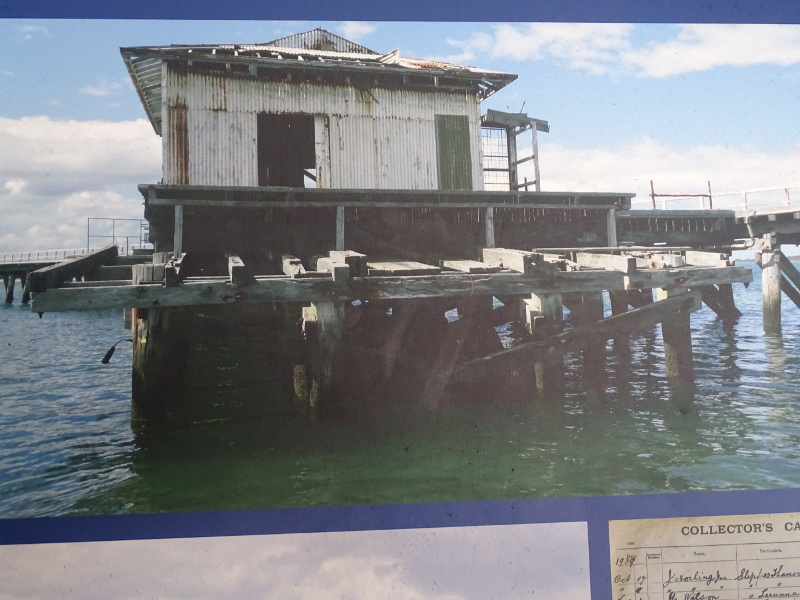 So, unlike nearly every other entry on Vintage Victoria, the biggest dramas and stories around this Welshpool jetty happened after the second world war, with life in the jetty’s early years seemingly fairly uneventful…unless the newspapers just didn’t pick up the stories for the Trove database…

Other links and writings on Port Welshpool Jetty

Local newspaper The Star welcomed the completion of the renovation in December 2018.

This WyldFamilyTravel blog put the jetty at the second place to visit in Gippsland.

What are your stories and memories of Port Welshpool Jetty?

Is anybody still alive today who attended the opening of the Long Jetty at Port Welshpool? You’d only have been small, but it might have left an impression…

If not, does anyone have memories to share of a time on the Long Jetty before it closed in 2003?

What about the Fisherman Jetty? Can anyone still remember when the tramline was still in place (even if no longer used)?

Any family link to Tanis Yuille, and did she ever talk about her rescue into Port Welshpool?

Or just get in touch if you have a favourite memory of your own from a visit to one of the jetties at Port Welshpool.