Port Melbourne Leading Lights were installed in 1924 to help ships find their berth at nearby wharves. Now surrounded by modern housing but still lining up nicely.

My experience at the lights

It took me a while to work out where exactly the Port Melbourne Leading Lights were. In fact, of course, they’re really easy to find, and just a short walk from where the tram drops you off at Station Pier, but heading up towards Princes Pier. 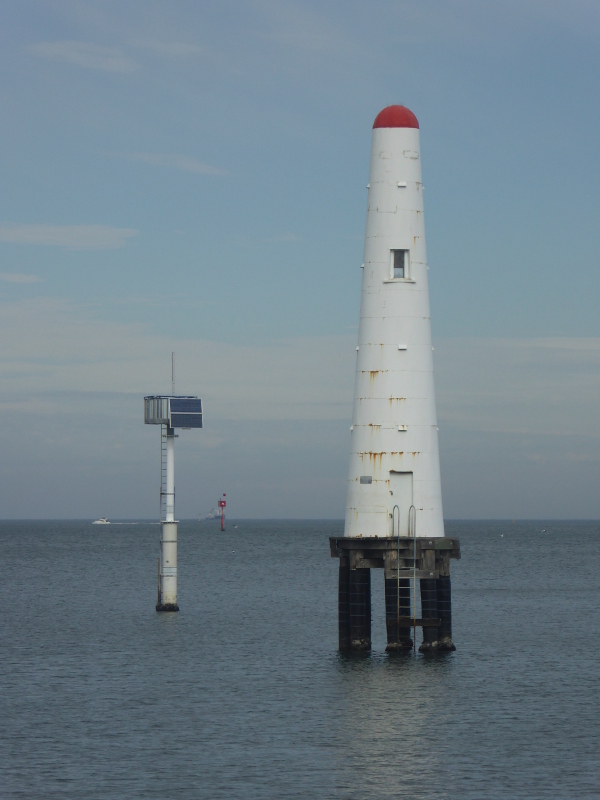 Because that was the point of these lights: for ship’s navigators to line them up for ease of arrival into the Port of Melbourne. When they were fully functional, the beam could be seen 20 miles away – I believe there may still be some kind of light shining for directional purposes, but I’d need a local to tell me from which beacon tower or indeed if they don’t shine a light at all anymore. 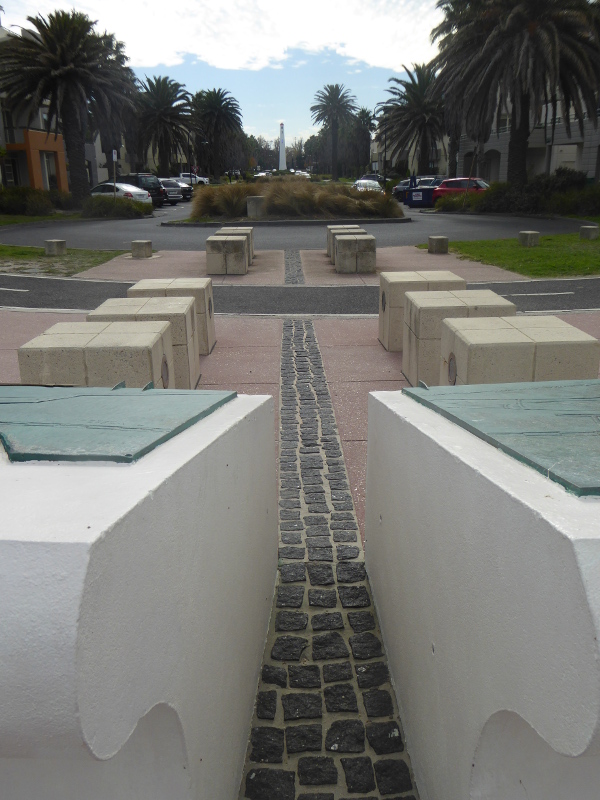 Somebody will know for sure because the two leading lights are lined up now, and surrounded by pretty swanky-looking residential accommodation, so residents must surely see the light too if it shines so far out into the Bay. 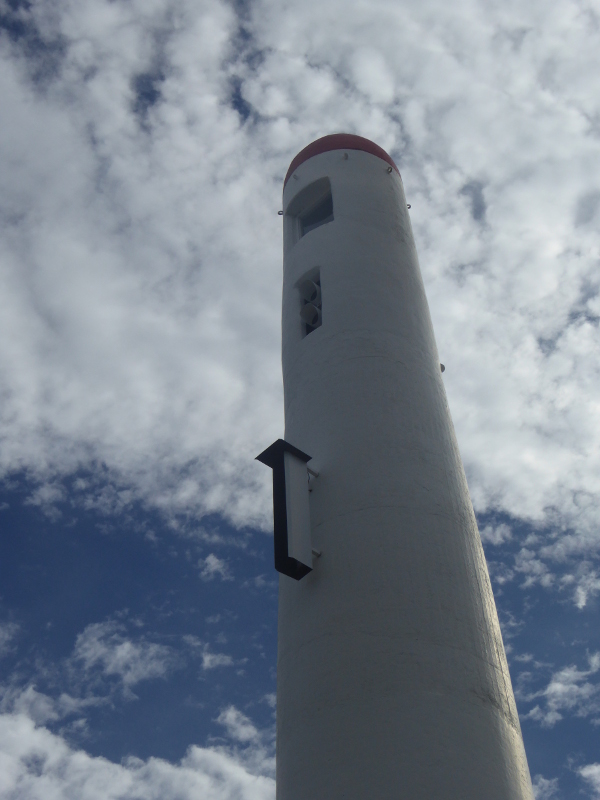 This must be such a different place to the Port Melbourne of 1924 – the year they were installed – when the docks were super busy, and the countless ships coming in from afar would have needed a clear guiding line to find their bearings and their moorings at Melbourne. 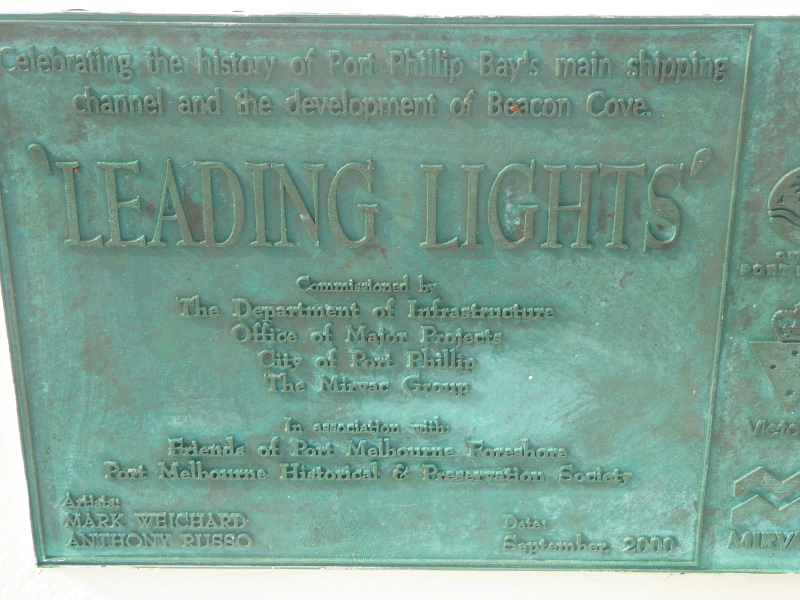 It looks now like an area for the upwardly mobile or aspirational types of the 21st century. As I gazed up at the rear light, cyclists zipped past on the cycle path, and people walked their dogs, with barely a glance at the piece of history standing there in front of them. 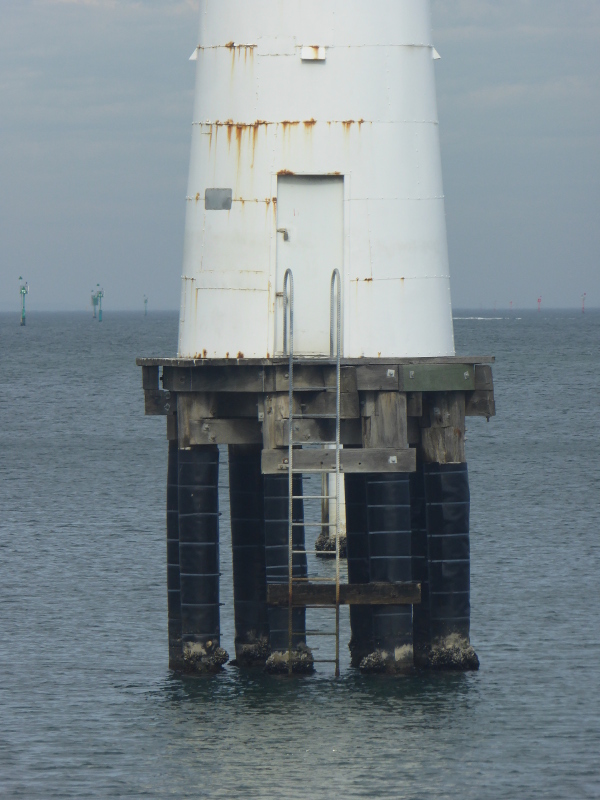 At least they preserved the lights; and commissioned an artwork to go with them.

So, the smaller of the two towers – lighthouses if you will – stands alone now 100m or so out in the Bay. Access seems to be just via a set of vertical metallic steps; the walkway that used to connect the beacon to the land is long gone (but see below for a 1930 photo in which it is still in place). 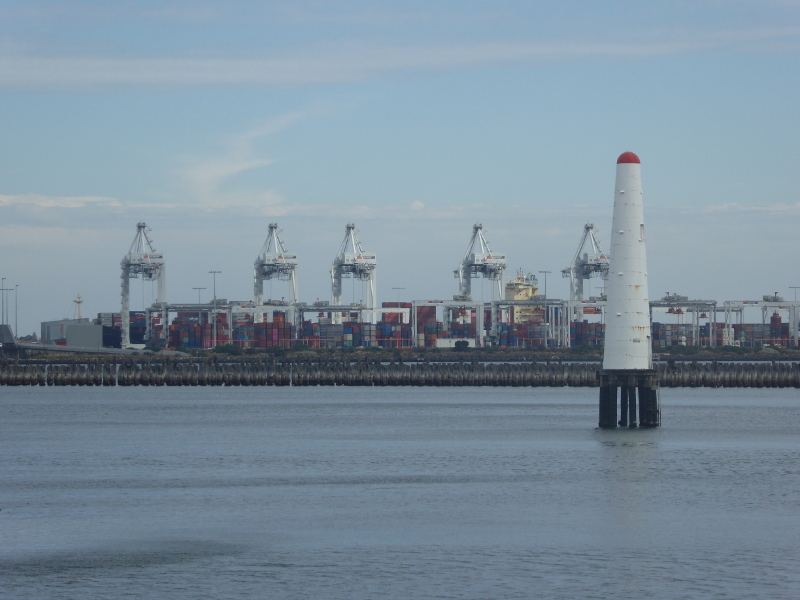 From different angles, there are great views of what is still an active Port of Melbourne, if not quite as bustling as it was 100 years ago.

Behind, towards Princes Pier are the loading cranes, still lining up beautifully behind the light from one angle.

Look out to sea, and there’s usually a freight ship or tanker somewhere on the horizon. 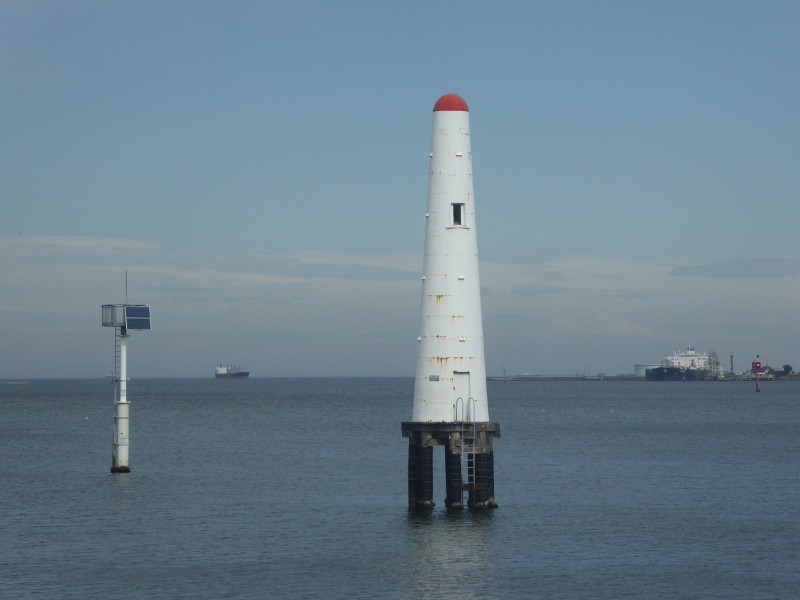 And then look back towards Station Pier, and there’s often the Tasmania ferry standing in dock, looking pretty impressive as a backdrop to the light. 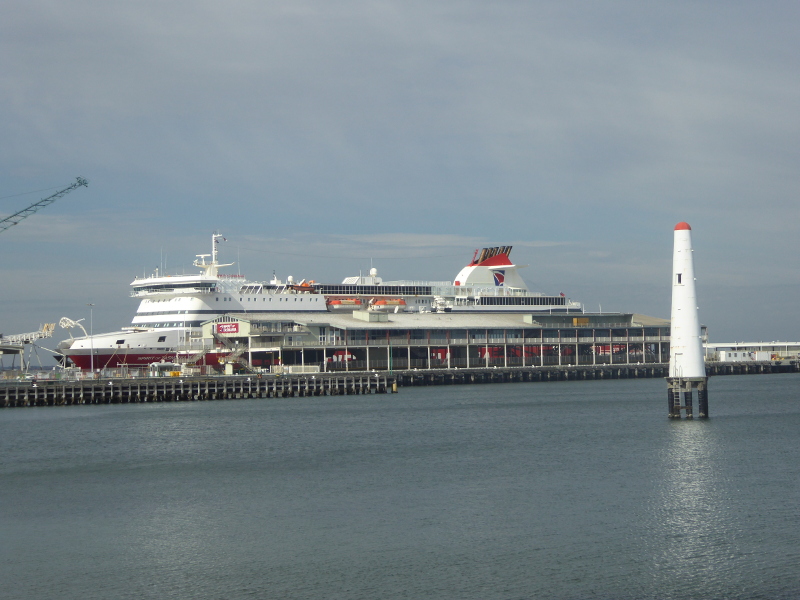 I actually liked the sculpture, which stands just inland from the walkway. It looks as if from this plaque it was commissioned in 2000. It’s quite informative, and a nice connection between the Yuppiedom of Port Melbourne today and its working past. 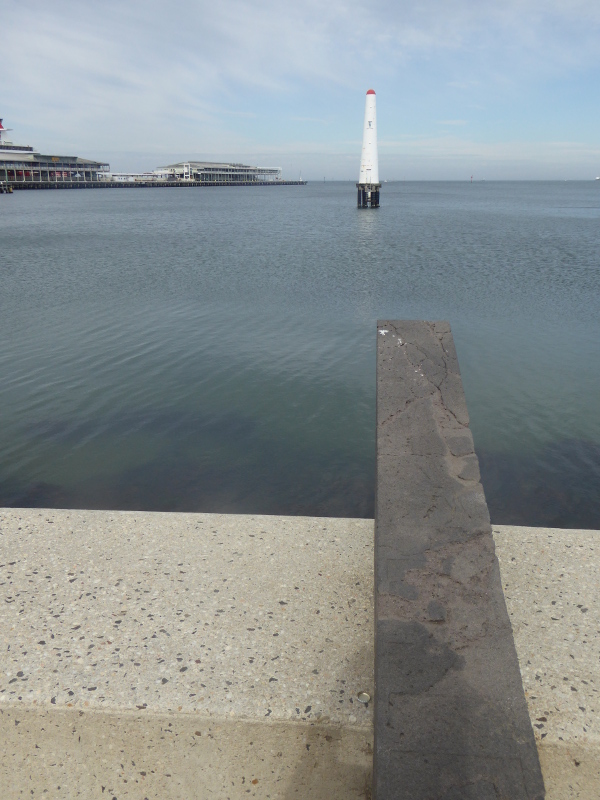 Both the rear and front lights have red noses, I guess part of the lining up system. 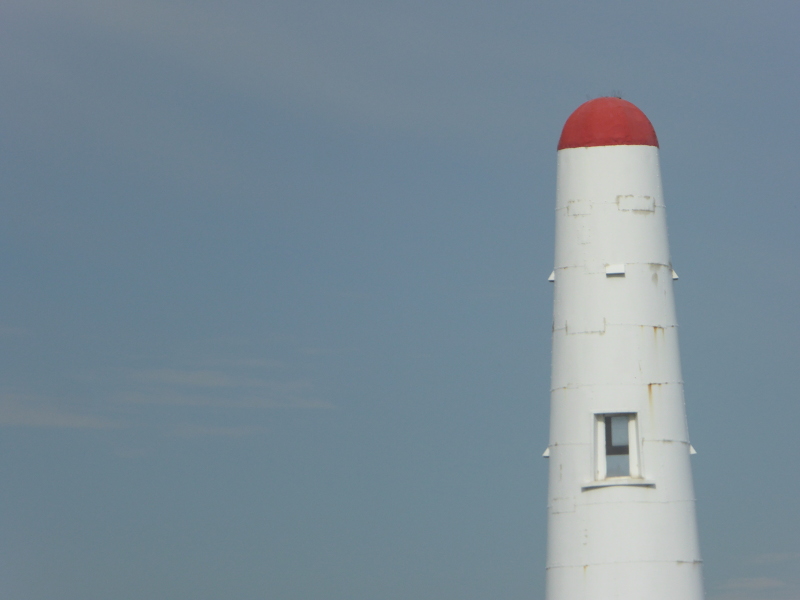 And I particularly enjoyed the view back out to sea and the front light from behind the rear light. You get a real sense here of how the lining up works. 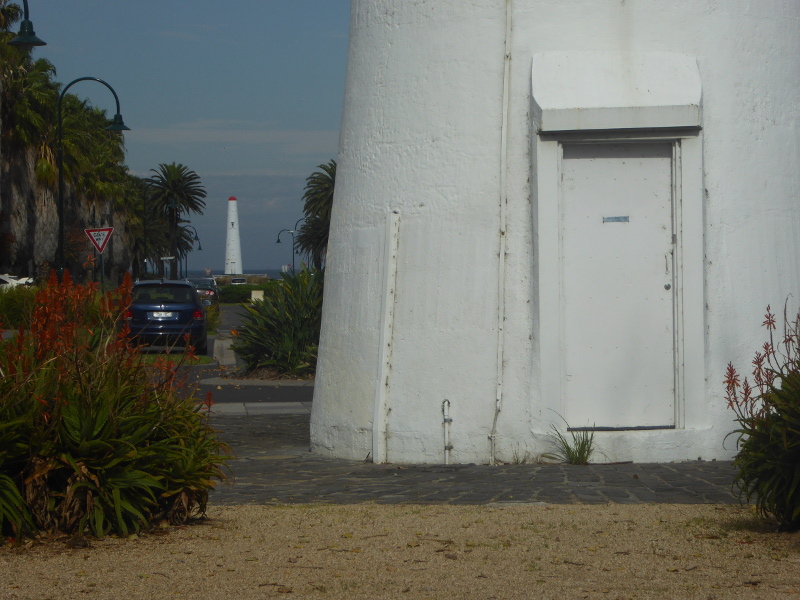 There’s no chance of entering either of the light towers these days (again, unless someone knows better than me – if so, do tell in the comments below). But they’re a nice landmark still in the centre of Melbourne, and I kind of envy those lucky folk who can afford to live down here.

Nothing much to say on the practicalities: No access to these lights, I’m afraid, unless someone knows better…

They stand between Station Pier and Princes Pier.

It proved very difficult to find stories on the Trove press database about the Lead Lights of Port Melbourne.

The only noteworthy one I could find dated from just 5 years after they were first lit.

In December 1929 a liner broke from her moorings on Princes Pier and was dragged along to rest on the sandbanks near the Station Pier half a mile away, passing on its way the Beacon lights. 11 ropes were snapped and a bollard torn from its post when the liner, about to depart for England, was taken by the gale. The captain managed the affair with great composure and just arranged for passengers and freight to board at the Station Pier instead of Princes Pier. With the help of three tugs, it actually managed to leave jut half an hour late!

But I did rather like this photo from The Argus in August 1930, which shows the seaward light and its walkway connecting it to land back then. The photo  is not in good enough condition to see the liner gliding past, sadly… 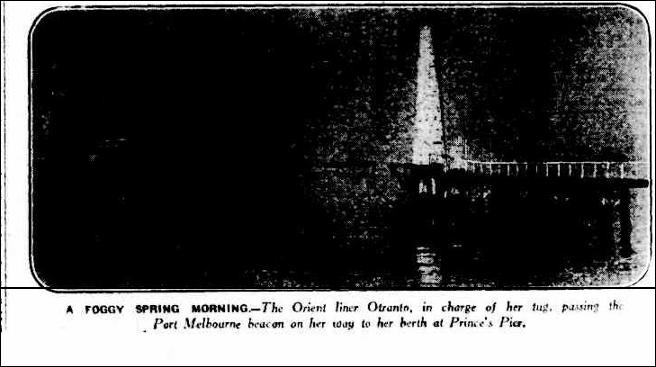 What are your experiences at Port Melbourne Leading Lights?

Has anybody been near the lights at night and can tell me whether there is still any kind of beam or beacon shining from either of them? If not, does anybody know when the lights weer last used?

Has anybody ever been inside one of these lights and would like to share what they saw?

Or does anyone simply have a story to tell to add to the rather limited information on the Trove website?

Other links and writings on the Port Melbourne Leading Lights

The Port Melbourne Historical and Preservation Society entry on the lights has a nice photo showing the remains of that walkway leading to the seaward light.

This is the Victorian Heritage Database entry on the Lead Lights.

There’s a brief entry on the To Melbourne website.

This aerial footage on the Dreamstime website gives a great perspective over the leading lights at Port Melbourne.