A vintage bandstand / rotunda is about all that remains of the old Port Fairy Botanic Gardens, which have now disappeared from online maps. There’s talk of funding to revive the gardens in 2021 though

Port Fairy Botanic Gardens have literally been wiped off the map, nearly all of their former site now taken by a gigantic caravan park.

It took me a while to find where the botanic gardens even used to be. I’m almost sure that when I began this tour of Victoria’s botanic gardens, I spotted Port Fairy’s gardens on Google, but in August 2021, my iPhone maps took me to a street near the centre of town, cheerfully telling me the destination was on my right. Somebody in Port Fairy has clearly been playing around because there is nothing near that spot (on Cox St) to suggest the gardens are, or ever were here.

Fortunately, if the idea is to erase Port Fairy Botanic Gardens from history, they forgot to replace the map outside the tourist information office, as that still marks up ‘Botanic Gardens’ in its spot by the bridge over the Moyne River.

I did find one ABC article (see link below) which suggested that the gardens were no longer marked but that was written in 2009, and there is certainly no ‘official looking gate’ these days. 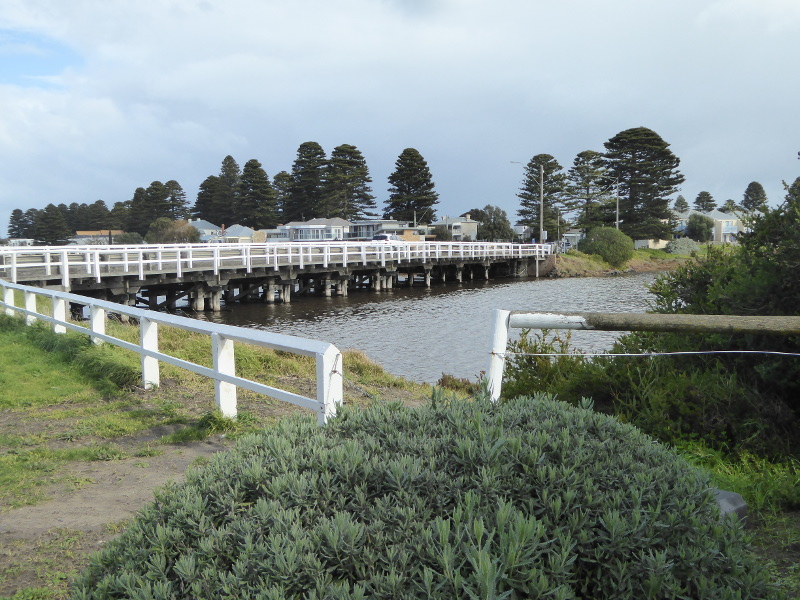 In fact, when I crossed back over the river to enter what used to be the gardens, all I found in terms of signage was this rusting information board, which really doesn’t fit with the modern look the caravan park people are seemingly after, so I wouldn’t be surprised if this sign is also gone by the time I get to post this article to Vintage Victoria. 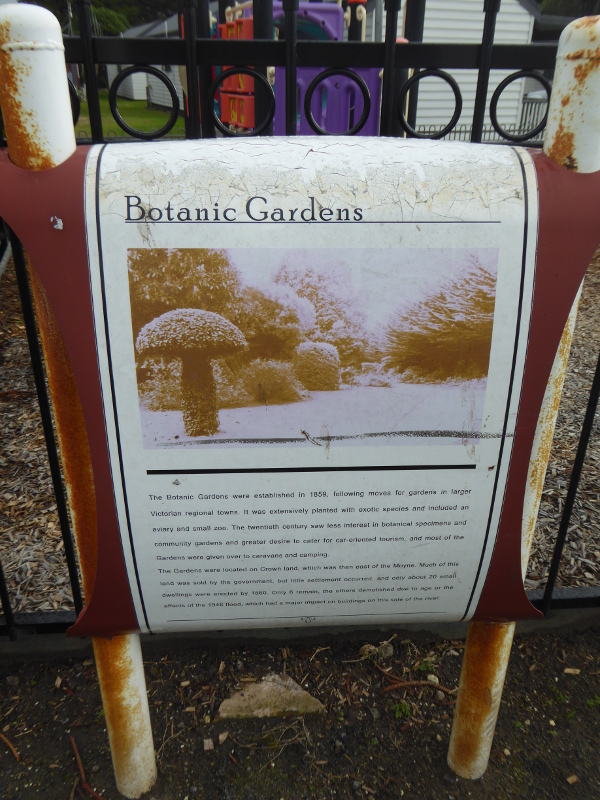 The only vintage structure left from the actual gardens appears to be the rotunda or bandstand. 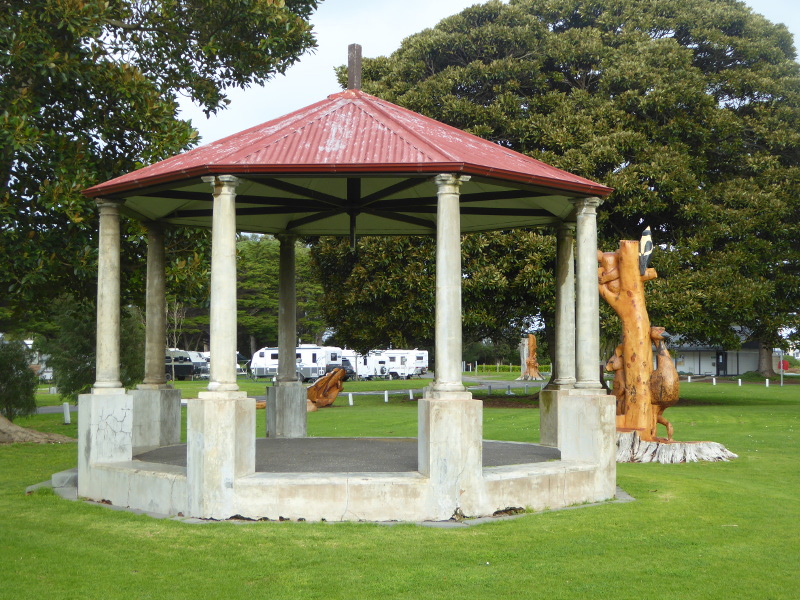 It is dedicated to ‘Annie Williams’, though there is nothing to tell anyone who she was or why the bandstand was given her name. 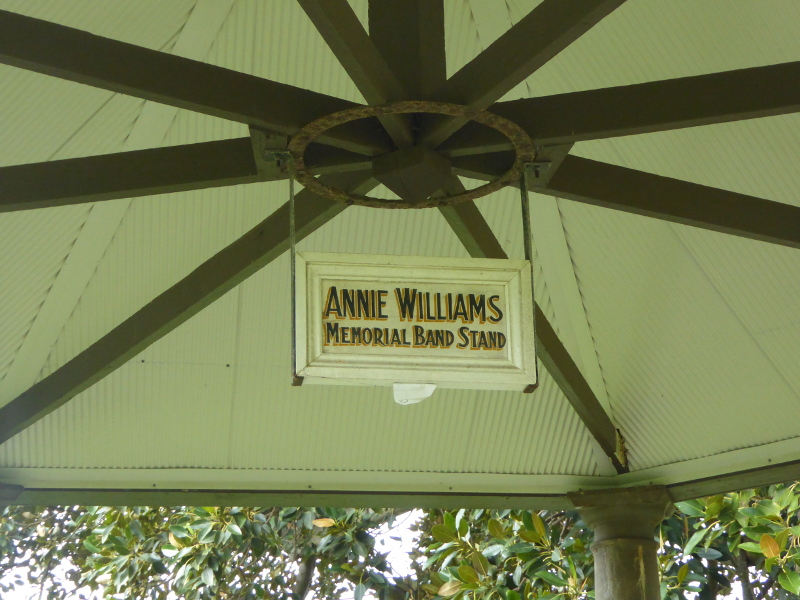 There are also a few vintage lamps, which are always a pleasure to see along garden paths. 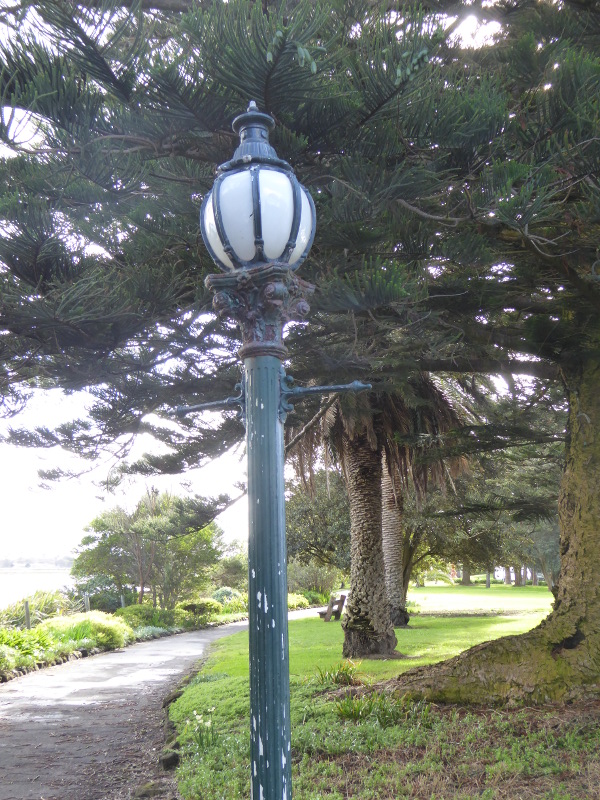 The only information plaque remaining inside the Gardens appeared to be from 2018, when some new trees were planted to commemorate the centenary of the end of the First World War, but even this plaque is strangely-placed, making it totally unclear which trees they refer to, and the small trees in the vicinity looked rather the worse for wear to me, even after only 3 years or so. 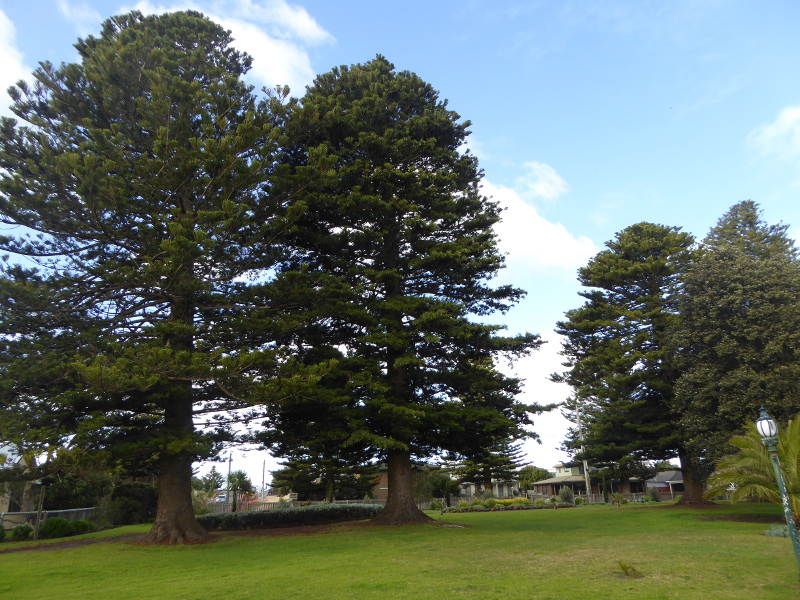 I was also a little surprised for a country that prides itself so much on remembering its Diggers, and has a bi-annual ceremony to say “Lest We Forget”, Port Fairy has done a good job at forgetting why the row of Norfolk Pines were planted in the Gardens in the first place (see my history below). You’d think at least they would have retained a small plaque to remind people of the original pines planted to remember the locals who died in WW1. 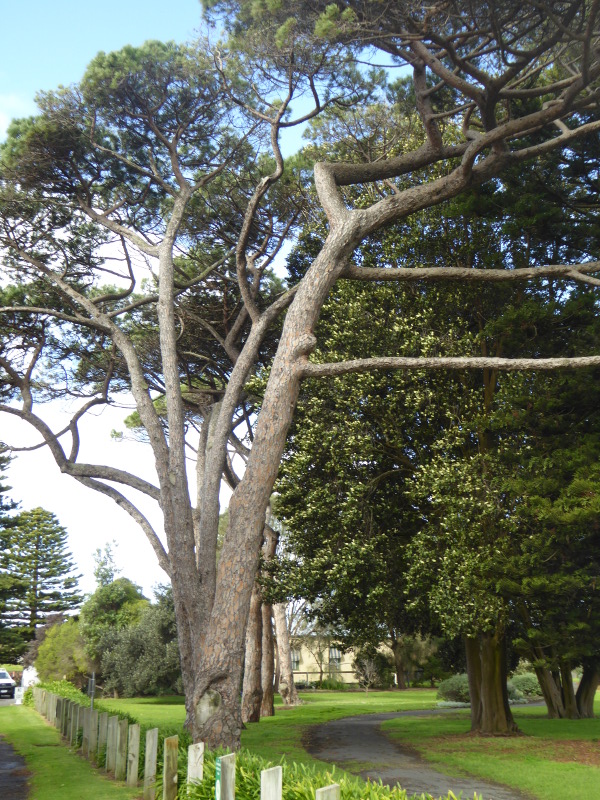 Hey, maybe I just didn’t look hard enough, but I found nothing. And with absolutely no signage for any of the remaining old trees on the site, this has really lost any claim to be a botanic garden (maybe that’s why they took it off Google Maps).

Right from early days, sports were played on the oval in the botanic gardens in Port Fairy. The oval is still there, and sure enough there was a footie game going on as I walked past (Port Fairy losing heavily to Portland, I might add). 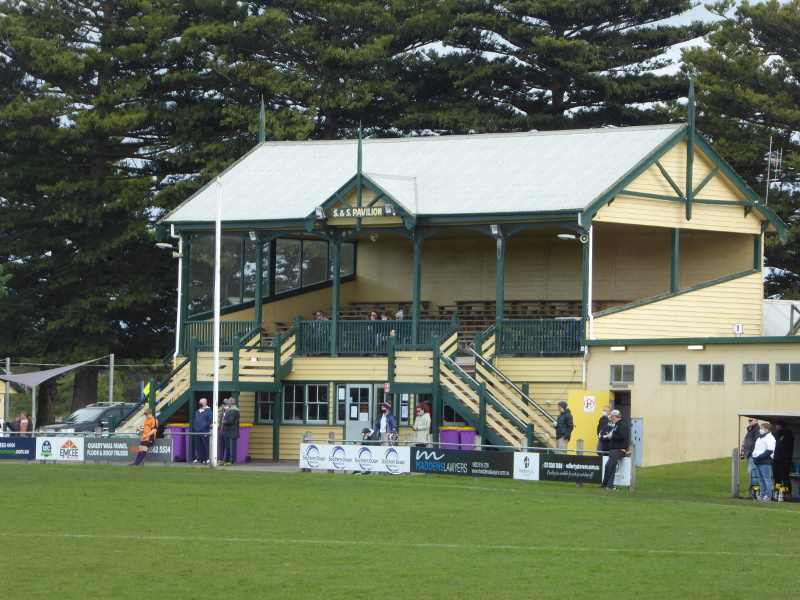 At least the vintage grandstand is still in place, and looks pretty impressive, though again I saw no signage to tell passers-by anything about its past (when it was built, or even some of the stars who have been there over the years – again, see history below).

It’s such a beautiful setting for botanic gardens, right by the Moyne River, but I guess the big tourist dollar took precedence over the simple free pleasures and education that botanic gardens afford.

A real disappointment, and if anybody is on a tour of botanic gardens in Victoria, I really wouldn’t waste your time with Port Fairy.

Port Fairy’s botanic gardens should be a warning to places like Koroit, which also seems to be allowing caravan creep to take over the gardens space slowly. I’ll be watching closely in the coming years, too…

Just out of town over the bridge heading towards the golf club, on the left, by the river.

I found one bench looking out over the river. 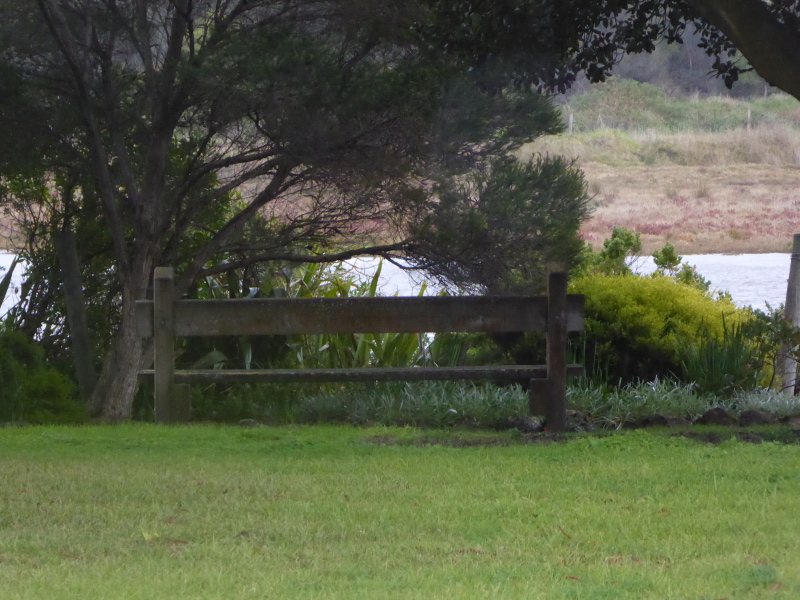 Even the toilets clearly belong now to the caravan park and were locked with coded entrance, so I had to use the toilets behind the oval grandstand.

The earliest story I found in Trove’s database relating to the Port Fairy Botanic Gardens actually came from a time when the town was called Belfast. In 1882, there was apparently a distinctive scarlet-flowering eucalyptus in the gardens – I wonder which it was and how long did it survive, I don’t think it is still there today.

The 1890s saw lots of key football matches held on the oval in the middle of the Gardens. The oval was right next to big beds of pansies and roses, so I hope there were not too many stray football boots lunging over these beds in search of wayward balls (though again they are long gone in 2021)…Tennis and cricket replaced football through the summer. As late as 1940, another new sport was added to the botanic gardens, when a croquet lawn was put in.

In 1897 a decision was made to erect a memorial to Baron Von Mueller, whose suggestion it was to introduce a certain type of grass that saved large areas of land from the spread of sand drifts. I wonder what happened to that, as well?

In 1903 the curator, a Mr Prior, retired after 40 years’ service at the gardens. I wonder if he was actually the first curator, since the Gardens only officially opened – or were reserved – in 1859.

In April 1914 there was a fund-raiser for the new Convent building with ‘novelty sports’ in the Gardens. These included a sheep-guessing competition (presumably the weight), and a Cutting of a Rooster’s Head competition, which would probably not prove too popular among the campers in 2021, I think.

In August 1915, in the middle of World War 1, naval officers and sailors gave demonstrations in the Gardens of rocket life-saving equipment, sending a line right across the park to hang between trees, and then taking members of the public across to ‘safety’ in a basket.

In 1917 a row of Norfolk Island Pines was planted at the rear of the Gardens to commemorate the 10 young men from Port Fairy who had gone to the front and risked their lives.

A carnival to raise funds for the local hospital held on Boxing Day 1918, so barely a month after the end of hostilities, included a new event, the half mile walk for returned soldiers, presumably many of whom would have lost limbs or senses during the conflict. Must have been an eye-opening moment for the locals of Port Fairy.

There was also a soldiers and sailors memorial pavilion in the Gardens installed in 1923. Rustic garden seats were put in for older people to rest while walking the gardens.

By May 1940, there were suggestions to allow part of the Botanic Gardens land to be set aside for a caravan park…In a greener direction, 1948 saw the planting of 300 new trees in the Gardens.

Athletics came to the fore in December 1949, when world champion runners attended a race on the track at Port Fairy Gardens oval – I’m afraid I haven’t heard of either runner named, but I’m sure it was a big draw at the time.

What are your experiences at Port Fairy Botanic Gardens?

Can anyone remember the Gardens at Port Fair before they basically became a caravan park and resort?

Has anybody got their own memory to share from a visit to Port Fairy Botanic Gardens, perhaps dating from some decades ago?

Other links and writings on the Port Fairy Botanic Gardens

If anybody hears of that 2021 funding being used to revive the Gardens, please get in touch via the comments below.