First built in 1890, the Point Lonsdale Pier pre-dates it neighbour the lighthouse by a dozen or so years. Popular fishing spot now with Mornington Peninsula in view.

We spotted Point Lonsdale Pier when we visited the lighthouse early on in the Vintage Victoria journey. That day it was warm and the turquoise water looked tempting, with snorkellers and swimmers cooling off near the pier as we watched from the high balcony of the lighthouse. 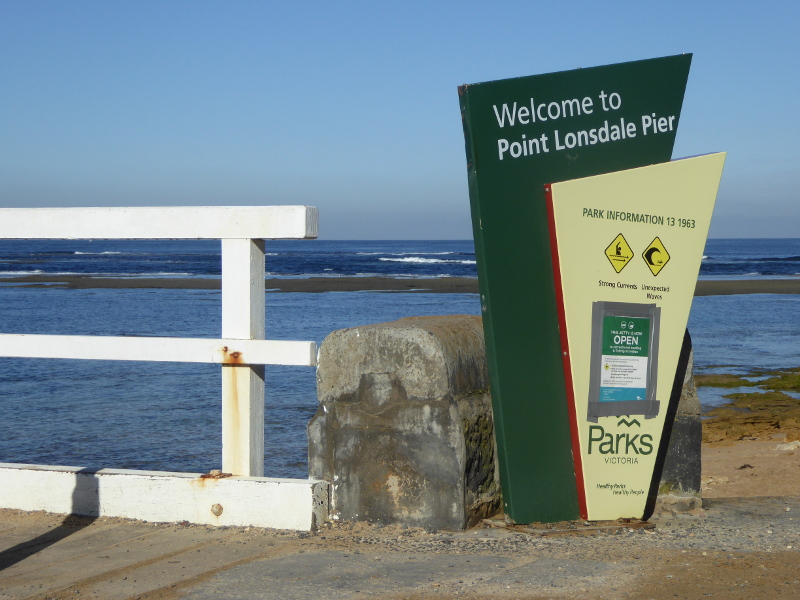 How different things were when we came back to visit and review the pier itself. A sunny day again, but this time mid-winter, so the water was less tempting, though it did still look crystal clear, was very calm, and we did spot some people in wet suits braving the cold temperatures, and others out kayaking past the pier. 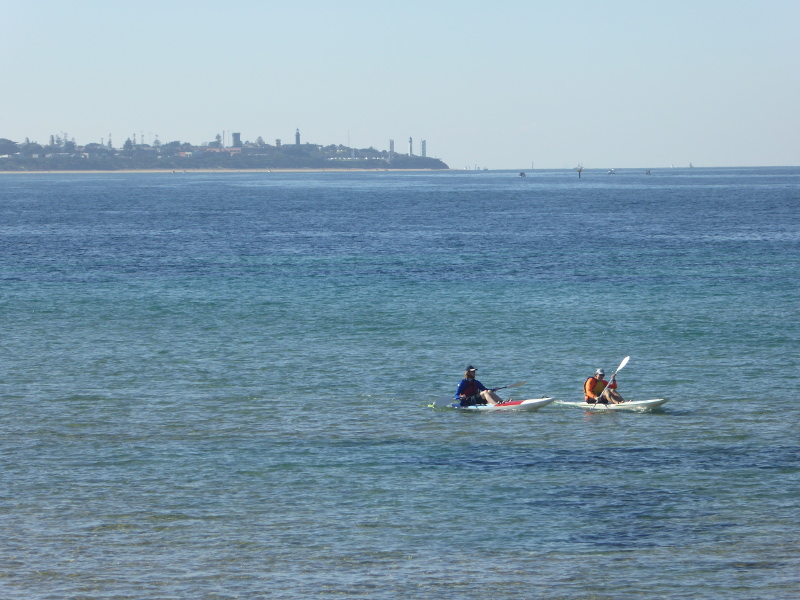 It was also very different up on the cliff top, with the Point Lonsdale Lighthouse covered in scaffolding. I think the light must still be visible from the sea, but it was the first time I had ever seen scaffolding surrounding a lighthouse from top to toe. 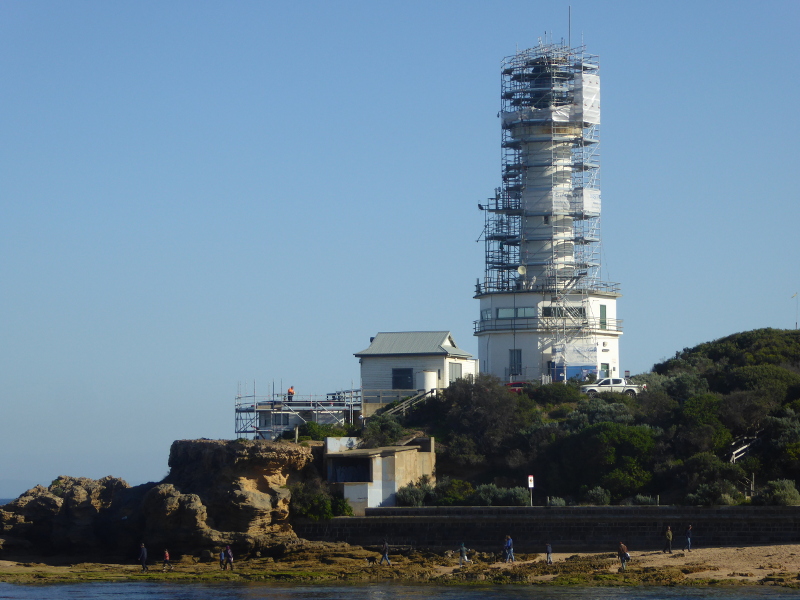 The approach to the pier is through the scrubby sand dunes along a path that shoots off to the left as you approach the lighthouse. The two are really very close by each other, which might explain how few stories there were in the Trove database relating just to the Pier at Point Lonsdale (mind you, the best story did also involve the whole lightkeeper’s family…see below for more on that). 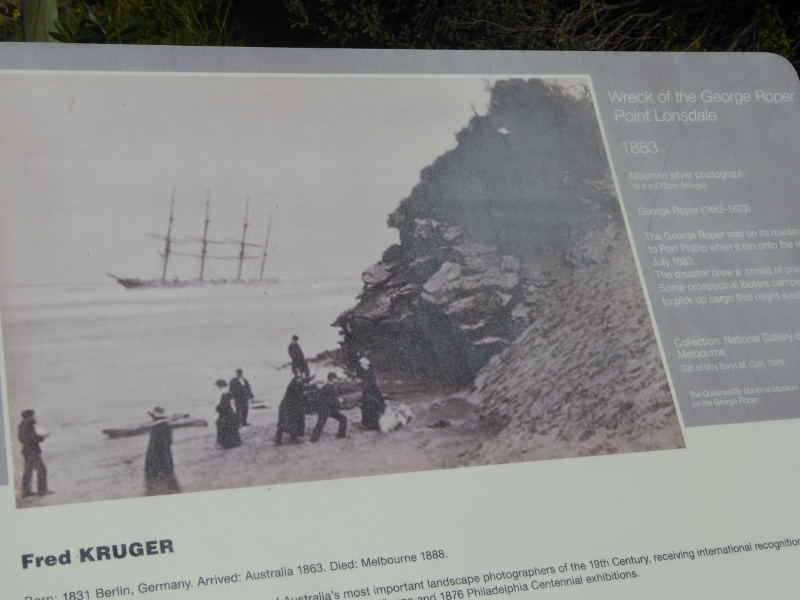 On the right-hand side of the path just before the pier starts, there is an information board about a wreck on the reef near here in 1883. The George Roper actually didn’t figure in my Trove search, but when I looked it up after our visit, I did notice that the captain of a boat which went to the rescue of the George Roper was the self-same guy as the one involved in a collision at sea not far from here just two years earlier. T.W. Smith certainly had a dramatic life, and got me thinking his biography might one day be an interesting project. 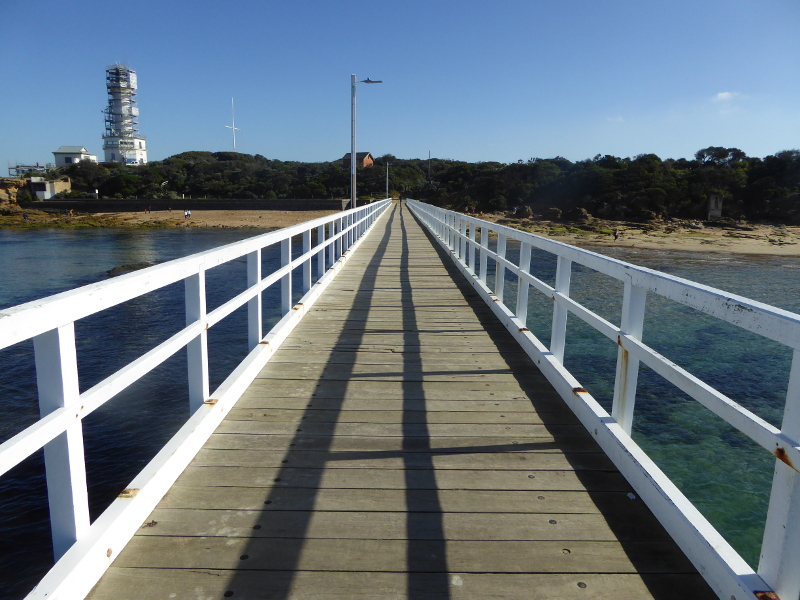 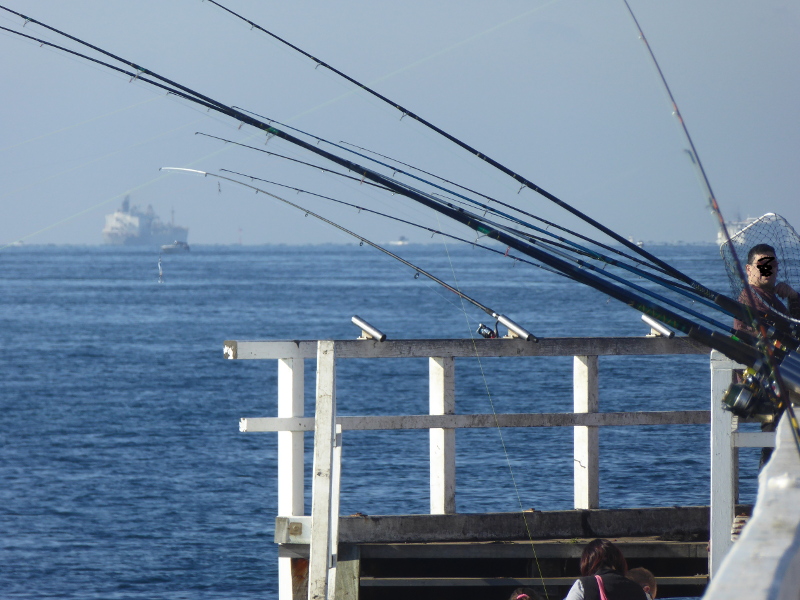 It’s a hive of activity at the end, with something like 25 fishing lines cast over the edge into the calm waters, most of them left balancing in those metal tubes for rods which you find on many piers in Victoria. 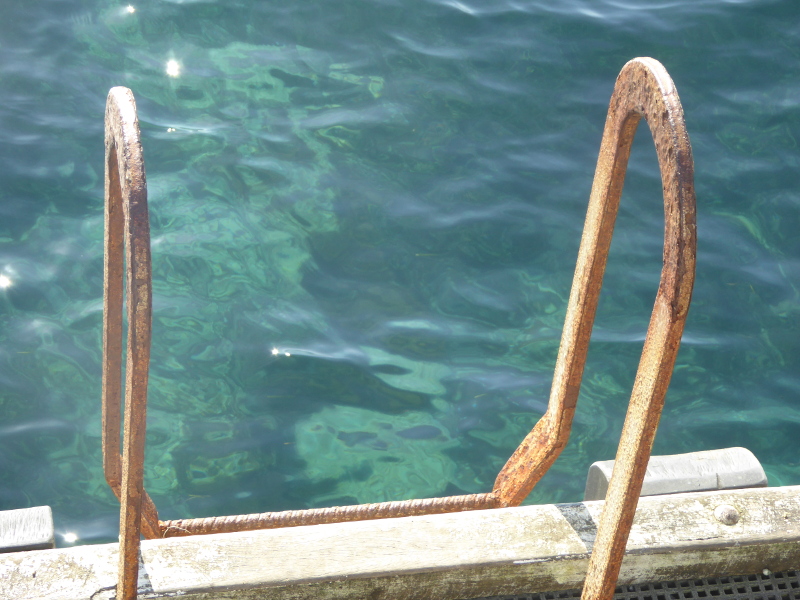 There was an interesting mix of people fishing, from the middle-aged lady doing it all alone (something of a rare sight, I realised when I saw her), to the Dad coaxing his young son (“don’t pull it up until you feel a bite, OK?”), to the usual blend of ethnic types and old sea salt lookers. 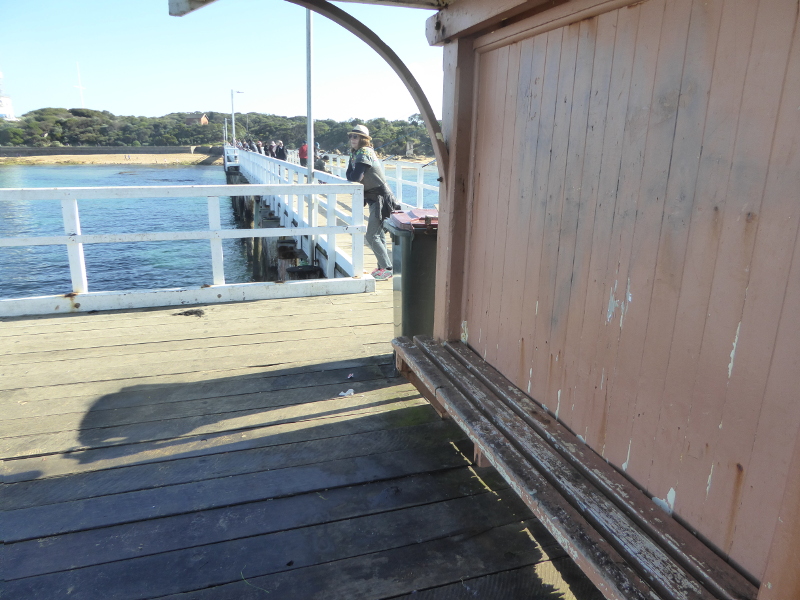 Right at the end there is a bench, with a small amount of shelter from a light breeze, and facing the sea a sink for washing and cutting your catch. 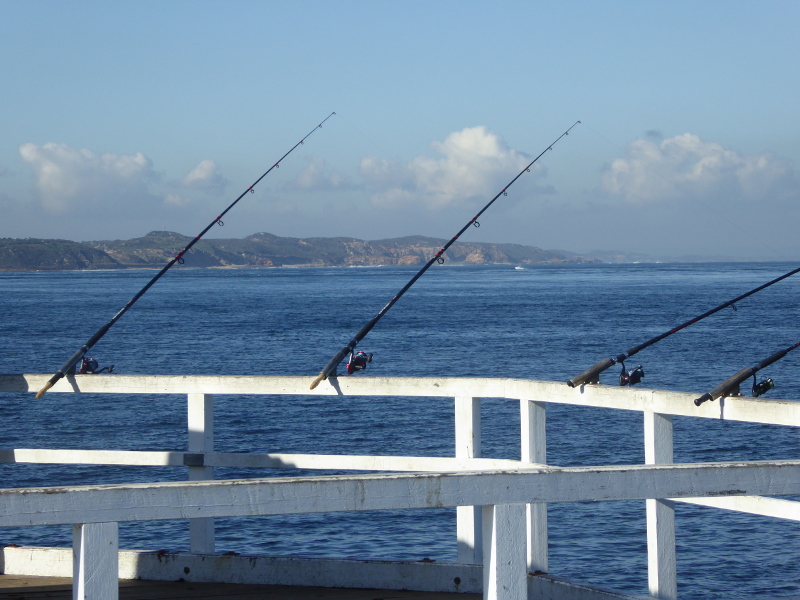 It’s hard to work out exactly which bits of coastline are visible from Point Lonsdale Pier. I think the nearest bit, on a green slope just across a narrow strip of water, forms the tip of the Mornington Peninsula, and if that is correct, it shows just how narrow the entrance is, and why you’d need a pilot to guide those big boats in. Off to the left, again I think, is Queenscliff, with its own lighthouse just visible on the horizon.

The lighthouse sits on the cliff just to the left as you look back to land, and on the right is what looks like some sort of WW2 defence look-out, though there is no information sign anywhere near to confirm or put me right on that. 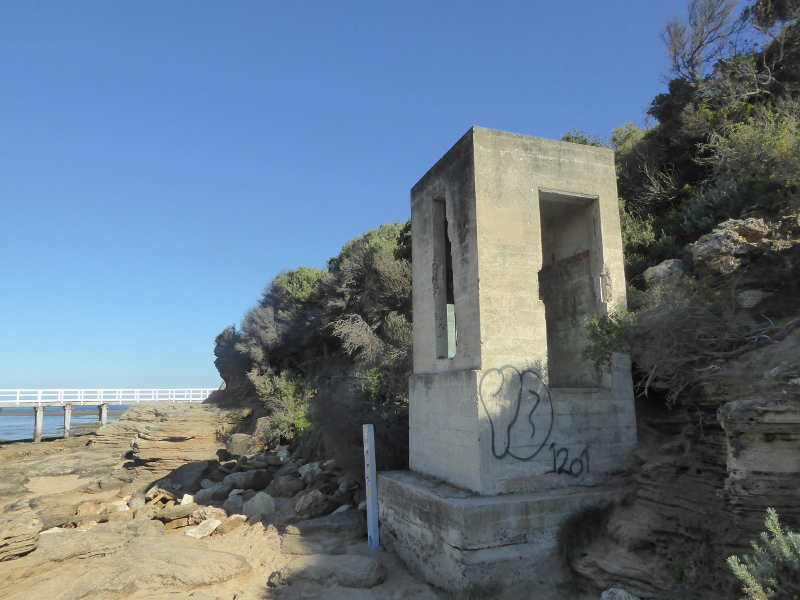 I think it was low tide for our visit to the Pier here. Sandbanks were revealed just to the west of the pier, where sea gulls lined up waiting for something or other. 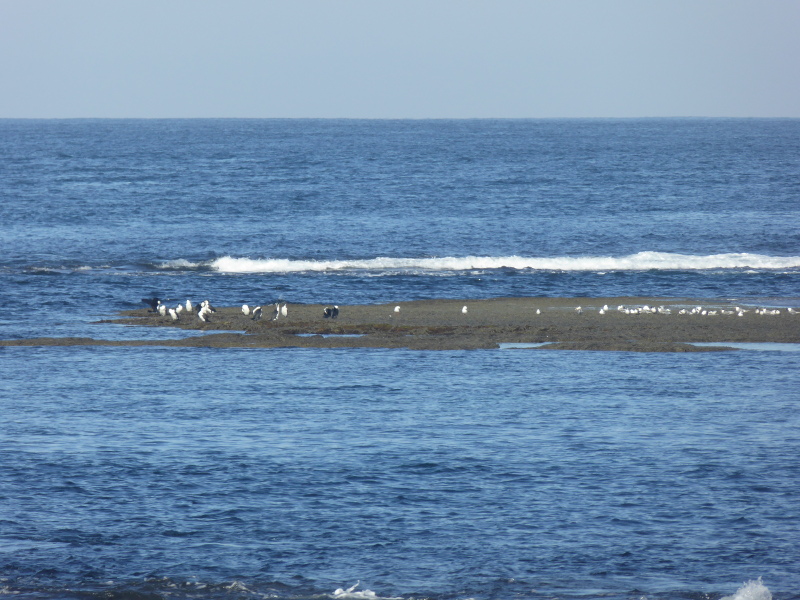 And people ventured out onto the sand quite a ways from the shore. Not something I’d be doing personally, though it was a beautiful, calm morning and nobody seemed to get into difficulty. 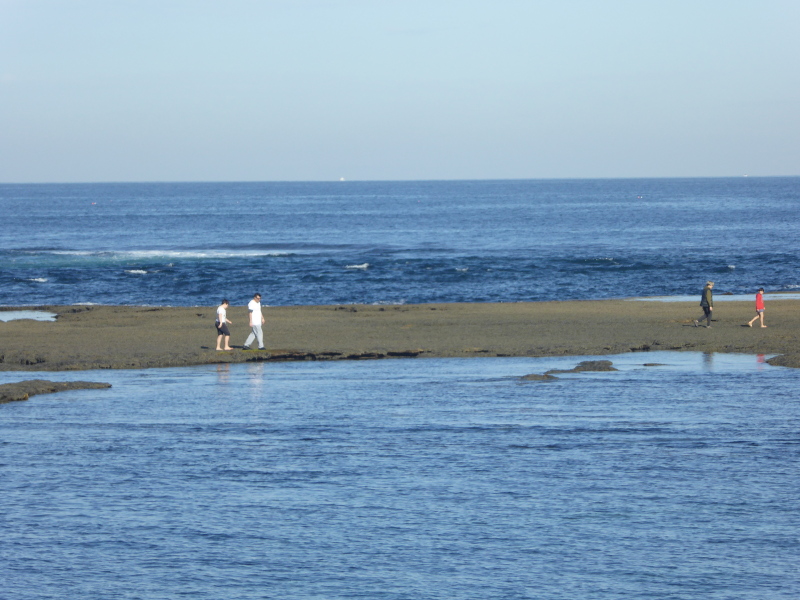 As usual, a peak underneath the pier at Point Lonsdale is well worth it. 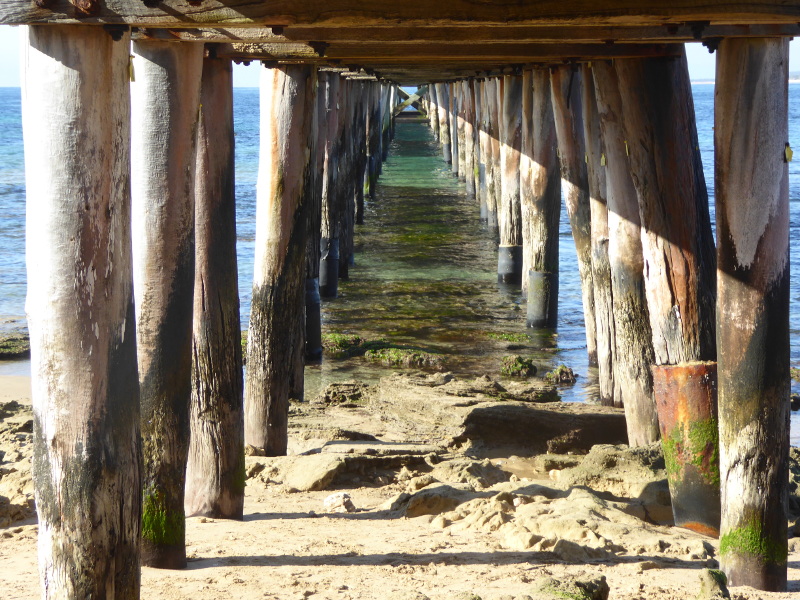 This pier is not only boardwalk all the way, with those glimpses of waves right under your feet as you walk the planks, but it also has a beautiful line of timber piles, marking a corridor underneath the pier. I also wondered how many times those piles have had to be replaced over the decades since the pier was first built. 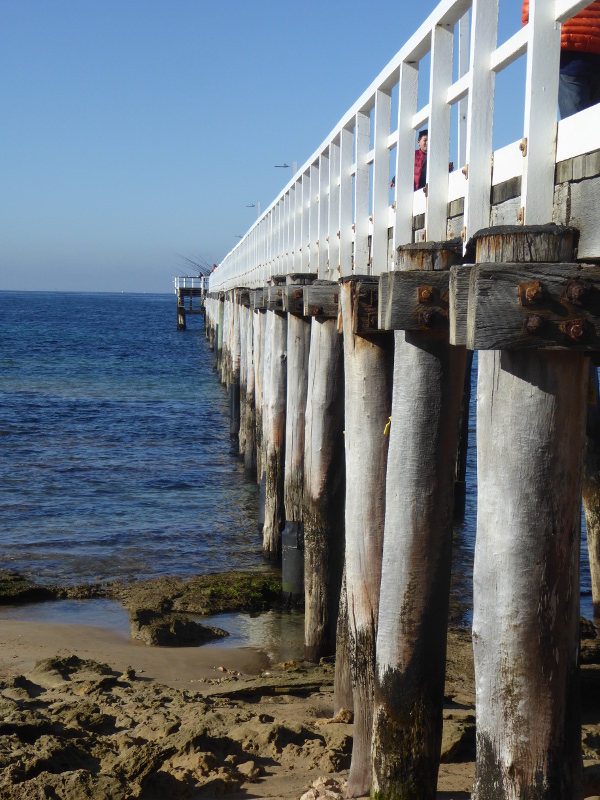 They’ve certainly done a great job of maintaining the vintage look of this pier, and it has survived the elements without the addition of too much concrete. 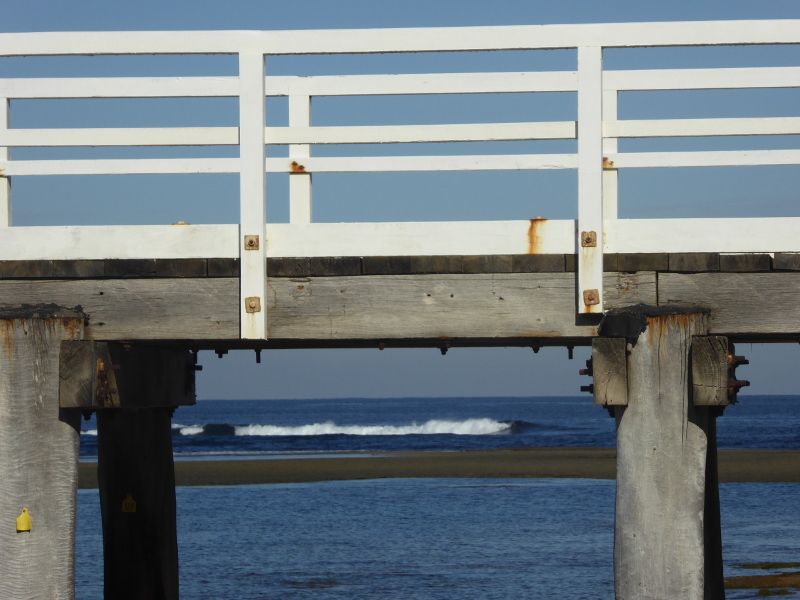 One small bench as part of a tiny shelter on the jetty, but I wouldn’t think it’d give you much protection in a storm.

Nearest toilets back near the lighthouse complex.

Built in 1890 for a lifeboat, which was needed in the wake of the sinking of the Glaneuse in 1886. It pre-dated the lighthouse by about 10 years.

On Boxing Day 1894 a small vessel with 11 holiday-making passengers on board ran onto the reef not far from the jetty. Although it was the Queenscliff lifeboat which was launched for the rescue, it landed three men on Point Lonsdale jetty before racing back to Queenscliff with other passengers.

An 8 year old girl slipped and fell into the sea off the pier in 1899. She was saved by a life buoy after clinging to a pile. An 80 year old man called Mr Ware was less fortunate in 1906. Walking with two companions on the pier, he suddenly told them he felt giddy and then fell into the water. Although still alive when pulled back onto the pier, he did not survive. Nor, probably, did a soldier in 1944, who was swept off the pier in a gale – I found no report later of him being found, or even his body.

Lighthouse keepers were often involved in rescues, but an incident in 1910 saw the Point Lonsdale keeper and his whole family in difficulties and themselves rescued by two soldiers. Basically, the keeper’s wife and his two sons had gone for a swim off the pier. The boys spotted a butter box floating by, caught by the ebbing tide, so they swam towards it, but they too got caught in the rip and were being dragged out to sea. The mother swam towards them but she also got into trouble, all of this viewed from the shore by the keeper himself. He then dived into the water off the pier, but struck his head on the sands and was dazed too, meaning the whole family needed to be saved by the two soldiers who happened to be strolling along the beach at the time.

Any more stories anyone to take us from 1951 to the present day? As usual, Trove peters out from the 1950s, so my greatest source of good stories is not so forthcoming for more recent years.

Other links and writings on Point Lonsdale Jetty

Amazing photos here during a storm, though the photographer almost got washed away himself

Another photographer Leeanne Cole caught the pier in different lights

Rural woman Kirsten Abernethy on fishing under the pier

What are your stories and memories of Point Lonsdale Pier?

Has anyone swum, fished, dived or launched a boat off Point Lonsdale Pier and got a story to tell for us here?

Does anyone have any stories to bring us up-to-date after the last interesting Trove clipping from 1951?

Is anyone around who experienced the storm here in 1951? Or can someone enlighten us on that concrete block on the beach near the pier? Was it a World War 2 defensive look-out?

Or just get in touch to share your own favourite times on Point Lonsdale Jetty.