Penshurst Botanic Gardens played host to grazing sheep for many years. These days covering a smaller area and converted to a wetlands garden, there isn’t much left of the old botanic gardens here.

Penshurst Botanic Gardens seem to have morphed these days into Penshurst Wetland Gardens. Judging by other pictures I saw on social media a few weeks before my visit in early winter, I missed the best time of year to visit, as the autumn colours looked amazing, but by winter a lot of the trees had shed their leaves. 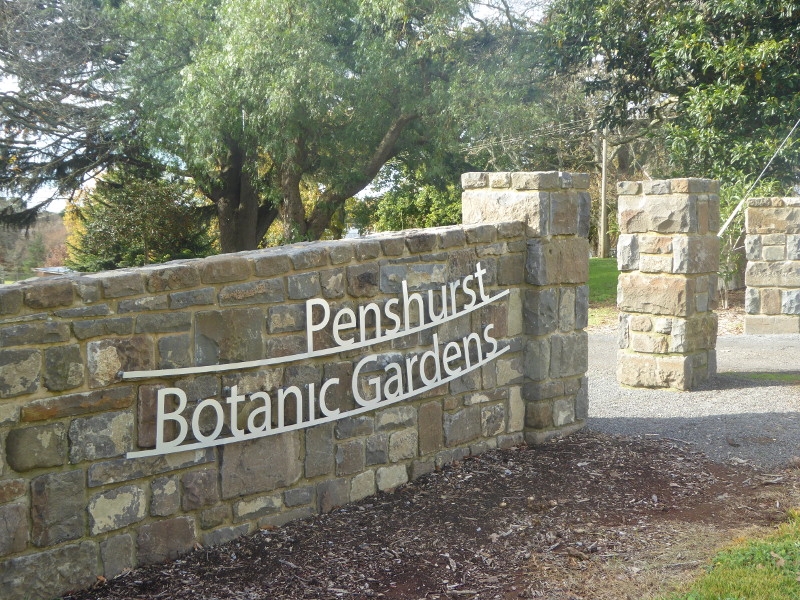 The Botanic Gardens name remains on the stone wall entrance, and there are some interesting history boards here and down near the creek, but there isn’t much of a ‘botanic’ feel to the gardens these days, so don’t come here expecting to find labelled trees, showing the different parts of the world the older specimens might have come from. 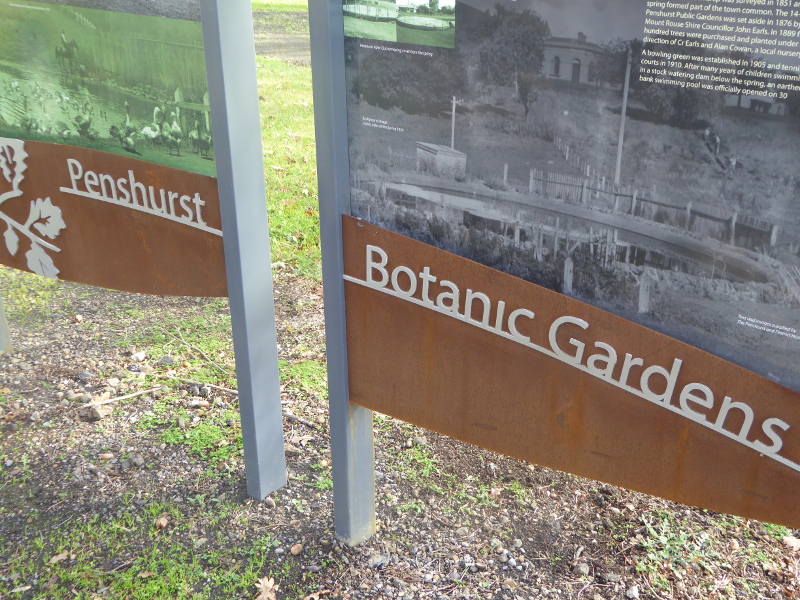 I have a feeling that the area once reserved for the original botanic gardens back in the 1850s includes the section now set aside for camping, as well as the sporting area with bowling green, swimming pool, and what might once have been the tennis courts, but looks like it is now a one-ended netball court. 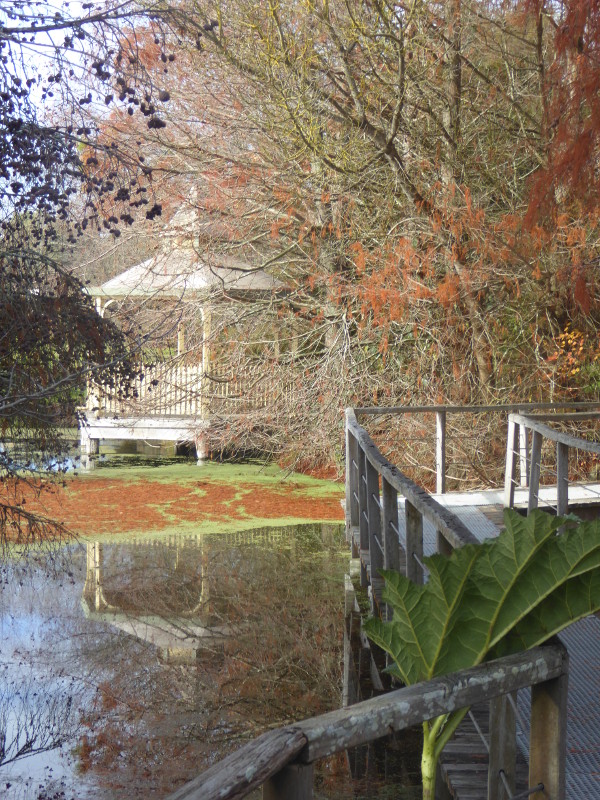 I don’t want to give the impression that there isn’t a lot to see at Penshurst Gardens, and the wetlands are a beautiful – if somewhat small – concept, but it doesn’t rate high in my ladder of preferred botanic gardens in Victoria so far, I have to say. 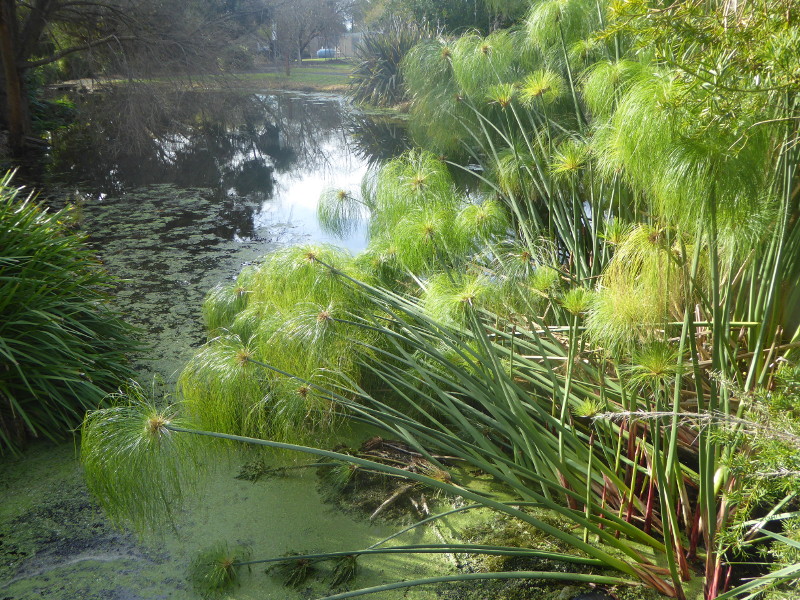 It took me a while to find them, for a start. Google Maps has no mention of Penshurst Botanic Gardens, so I had to guess that the Wetland Gardens were the same thing. Then when it came to parking up for entering the Gardens, I drove right around the perimeter before I could see any place to leave my car for a stroll around the place. 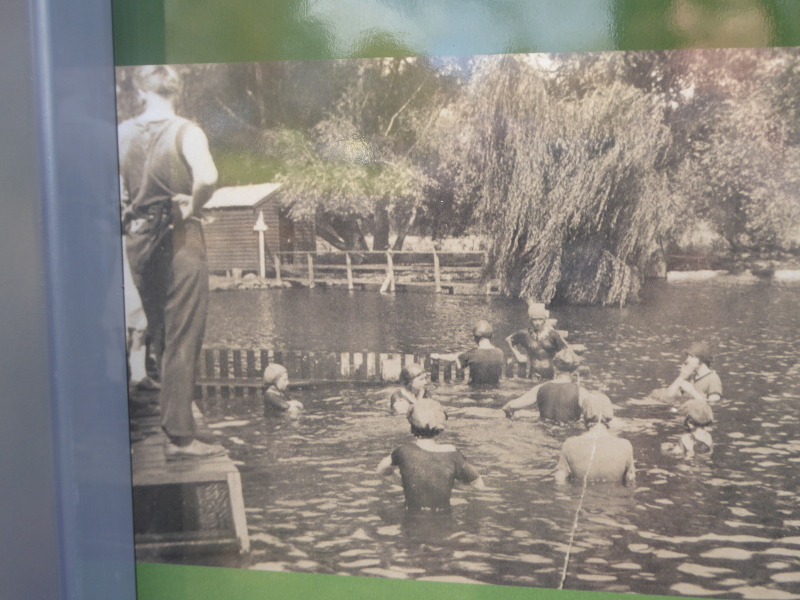 I ended up down at the bottom, near one of those historical information boards. This board told of how the first white settler to the area arrived in 1839, and decided to set up the town, though the local indigenous people weren’t too keen, especially when the idea of the botanic gardens seemed to encompass their traditional water source at the spring which today forms the centrepiece of the Wetland Gardens. 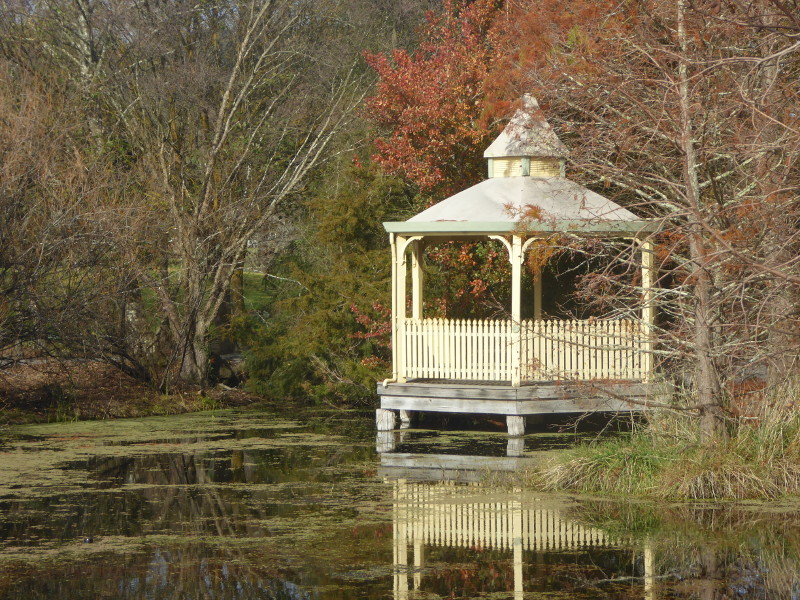 The lake is beautiful, there’s gurgling water flowing into it; there’s a rotunda out in the middle of it; and this was the setting for the superb autumn colours I had seen on social media. 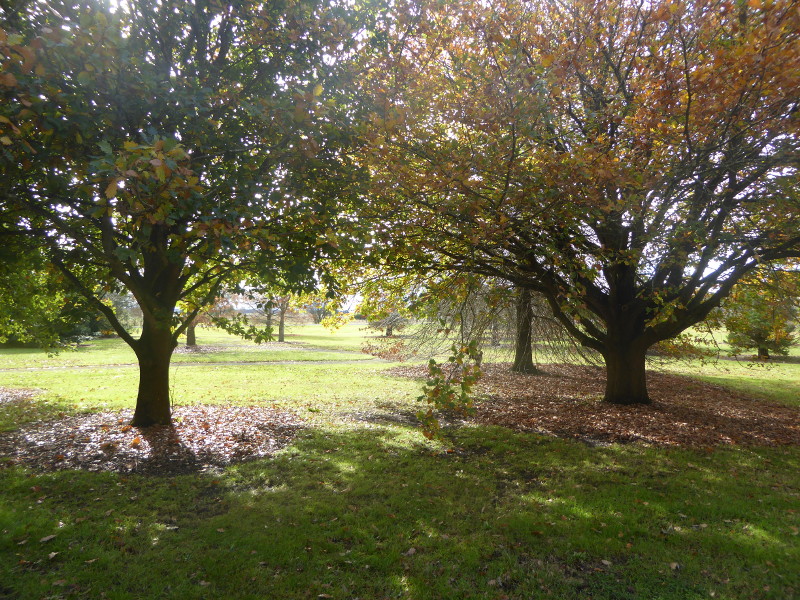 There are some beautiful old trees, some deciduous… 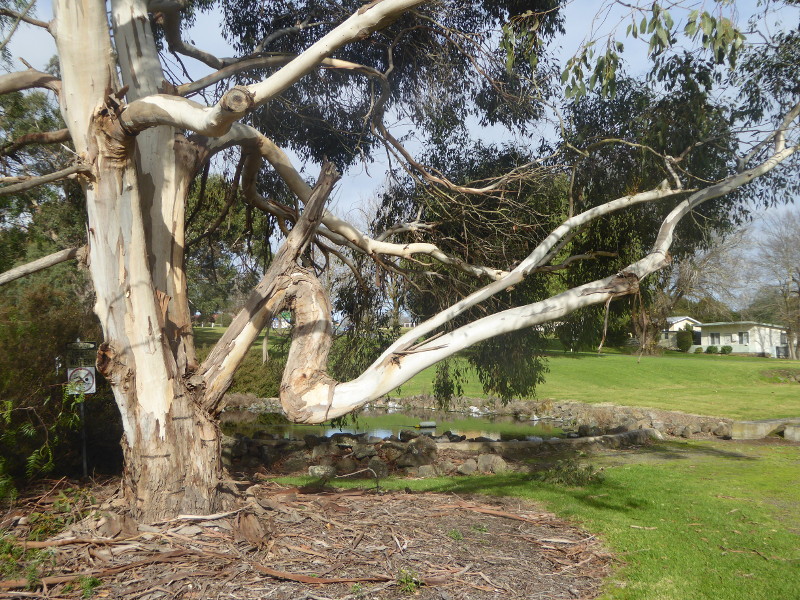 But nowhere that I could see any labels to tell me – in that Botanic Garden-y way – what any of the trees were.

It didn’t take long to make my way around the lake, and round past the bowling green and tennis courts, up to the spring. 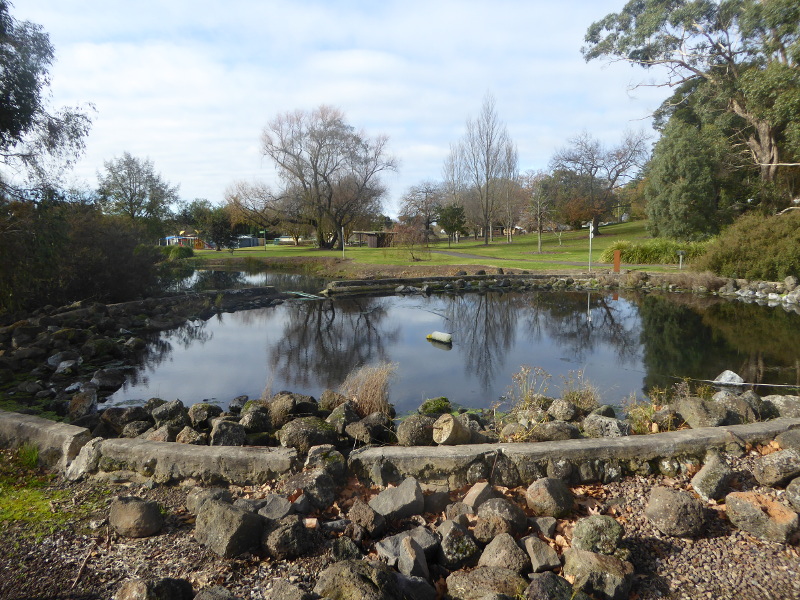 This is clearly the ancient water source so probably has significance for the original inhabitants here, and it would have been nice to have some of their stories as well as the nice tales of later settlers and their swimming experiences in the freezing cold water from the early 1900s. 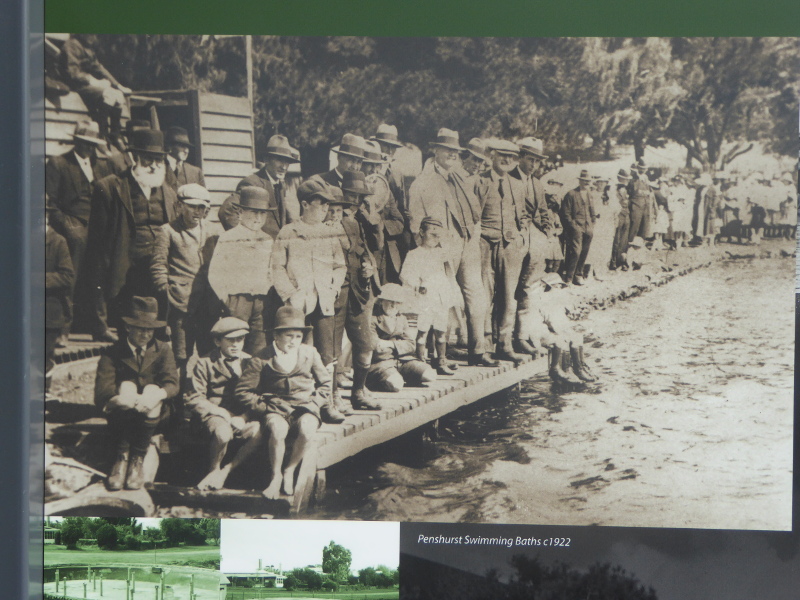 The original swimming baths look as if they were created out of the lake downstream from the spring in 1922; there is now a pleasant but modern outdoor pool, probably heated in summer, but closed for the season now, sadly. 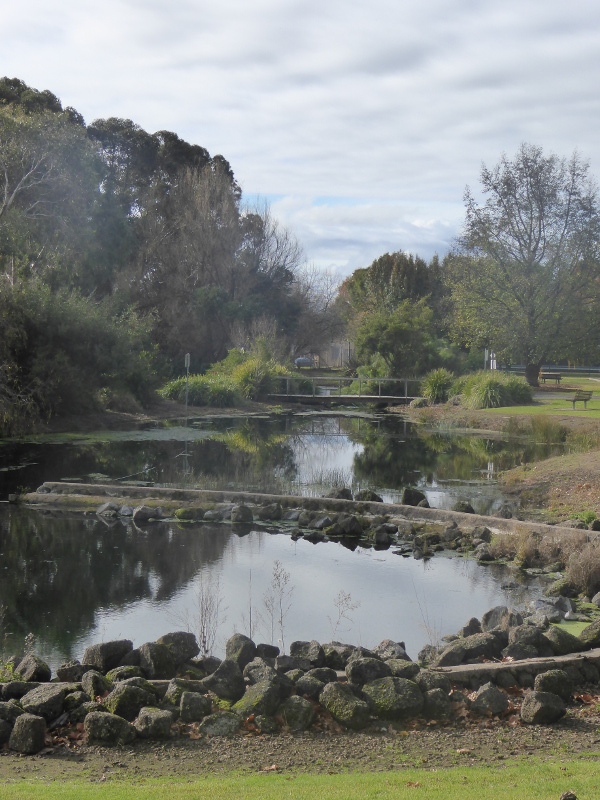 The circular pond at the source of the springs felt like it needed some extra definition or explanation, but the flow of the stream down towards the lake is certainly an attractive part of the Gardens. 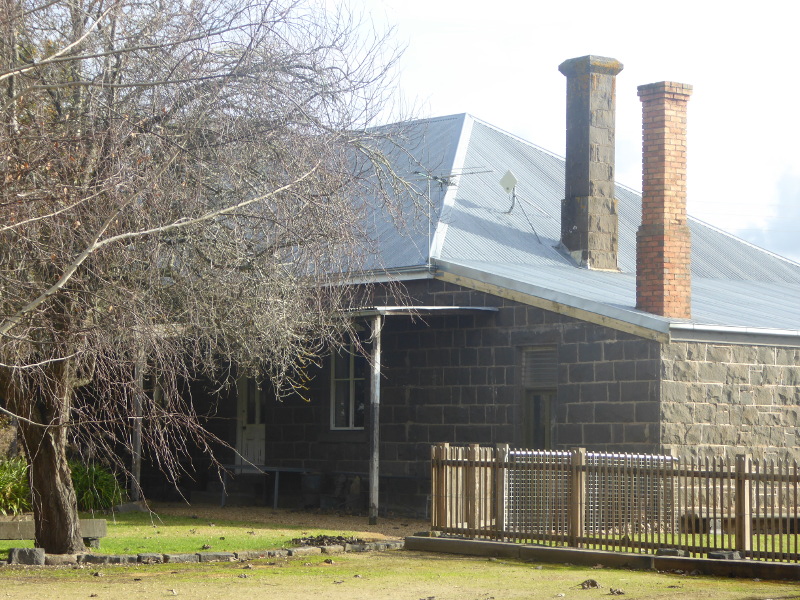 The bluestone building across from the springs looks now as if it is a private residence. It was once the Cricketers Arms hotel, and must have a few stories of its own to tell. Lovely building, anyway. 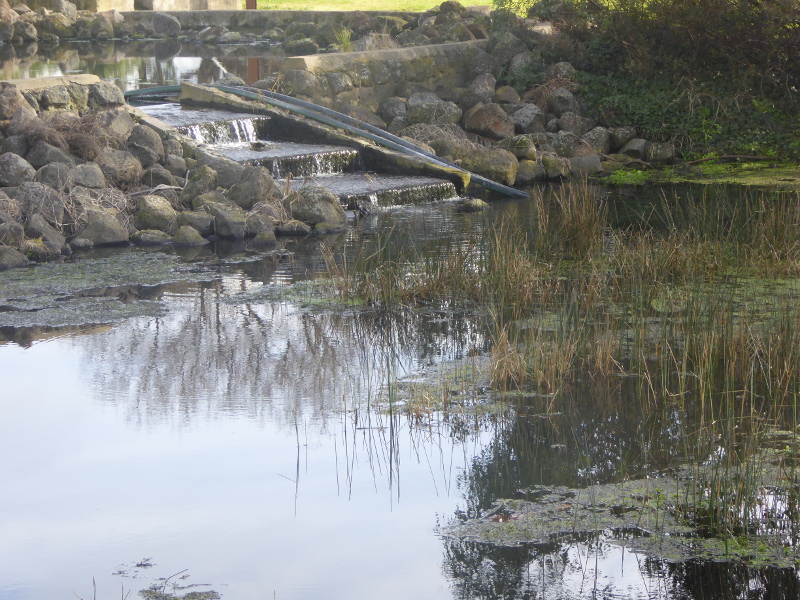 With very few articles in the Trove database about Penshurst Botanic Gardens, and the last of those that were there dating from World War 1, I left Penshurst without any real sense of the spirit of this place, nor any sense of how, when or why the Botanic Gardens ceased to be ‘botanic’.

If anyone can fill me in on what happened here between 1918 and the quite recent conversion to Wetlands, I’d love to hear from you.

There are boardwalks over sections of water, but I didn’t spot any benches except in the rotunda.

Toilets linked to the campsite too.

There were no Trove articles on the Penshurst Botanic Gardens for their first 50 years or so. In 1901 a local councillor put a motion to the council that footpaths should be built through the Gardens, and that notices be put up “warning people not to destroy the trees,” so clearly some sort of misdemeanours were going on in those early years…

In 1906 a young man was prosecuted for ‘insulting behaviour’ and ‘obscene language’ during a concert in the Gardens. He was drunk and had no recollection of the incident according to his lawyer in court. He was fined 10s for the behaviour and 2 pounds for the language, with a warning that he needed to ‘turn over a new leaf.’

Regular concerts were held in the Gardens in the early 1900s. One 1908 event included early cinema, “bioscope views by a celebrated lanternist of Melbourne,” and “gramophone music” played in between numbers by the Penshurst Brass Band.

By 1910 there were complaints that the fencing around the gardens had gaps in it and boys could easily get inside at night, causing mischief, damaging plants and stealing trees. One local resident suggested barbed wire be added to the fences, but the Council was concerned about liability for any injury. Part of the problem may well have been that sheep used to graze in the gardens, and we all know how much grass is greener on the other side of the fence, so a flimsy fencing might have given way easily.

The Penshurst Free Press complained in 1911 that the gardens were a disgrace. “We do not think grazing is the best use to which the area can be put,” they said on the day the tenders were to be opened for leasing of the land for the following 12 months.

A fire broke out in the Gardens in March 1916, but ‘leading citizens’ acted promptly to put it out. Ah, those were the days when civic leaders DID hold the hose…

Fund-raising events began to be held in the gardens during WW1, and the reports gave the impression that the gardens had shifted from being a rough area for grazing sheep to a place of leisure and enjoyment. One event involved an all-day tennis tournament, and well-stocked fancy goods stalls etc. Your 1 shilling adult entry fee gave you entry into the raffle to win a ‘decorated cake.’

What are your experiences at Penshurst Botanic Gardens?

Does anyone just have a good memory they’d like to share about a visit to Penshurst Botanic Gardens before or after its change to a wetlnds gardens?

Can anyone fill in with any stories about things that happened in or around Gardens to bring my history section beyond my last story from the Trove database, which is from as early as 1918? Did the gardens keep the same name? Were they closed for a while? Did they just fall into disuse prior to the wetland change? Can someone fill in the gaps here?

Other links and writings on the Penshurst Botanic Gardens

The Visit Greater Hamilton website has put up an impressive display of photos of the Botanic Gardens in Penshurst.

This is the Grampians Point entry on Penshurst Botanic Gardens.