The 1894 frontage of Sorrento’s Athenaeum Hall still stands today. Much of the interior is modern but the main cinema retains several original features

I think I saw a film at the Athenaeum Theatre, Sorrento on an earlier visit to the area in the 1980s or 90s, but I wasn’t so interested then in studying the history of places I went to, and it may be just that I noted that Sorrento had a vintage cinema I might like to get to one day. 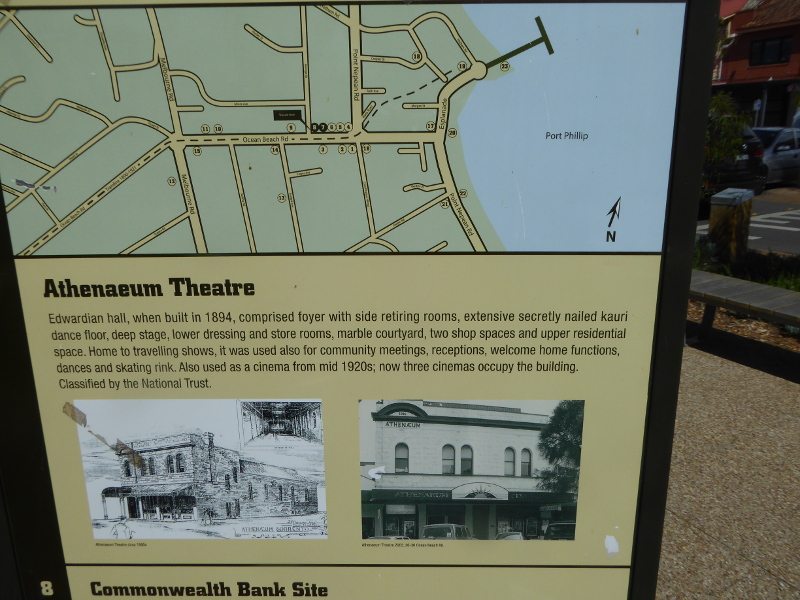 But this trip in late 2020 was not only my first time in Sorrento in at least 20 years, it was our first outing to the pictures since COVID stopped such activities back in March, making it 9 months since we last saw a film on the big screen.

When it comes to reviewing cinemas for Vintage Victoria, the choice of film is secondary, and on this Sunday afternoon in late November, the film starting at the time that suited us was a bit too full of guns and violence for my taste, and unfortunately it was in probably the least vintage section of this theatre, as I was to find when I took a sneak peek into another room on our way out. 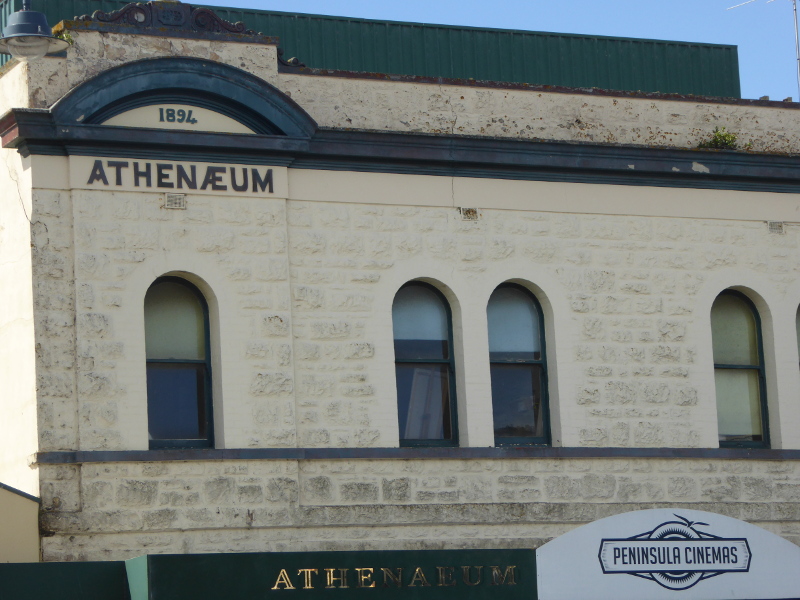 Thankfully most of the renovations over the decades have left the façade pretty well intact. 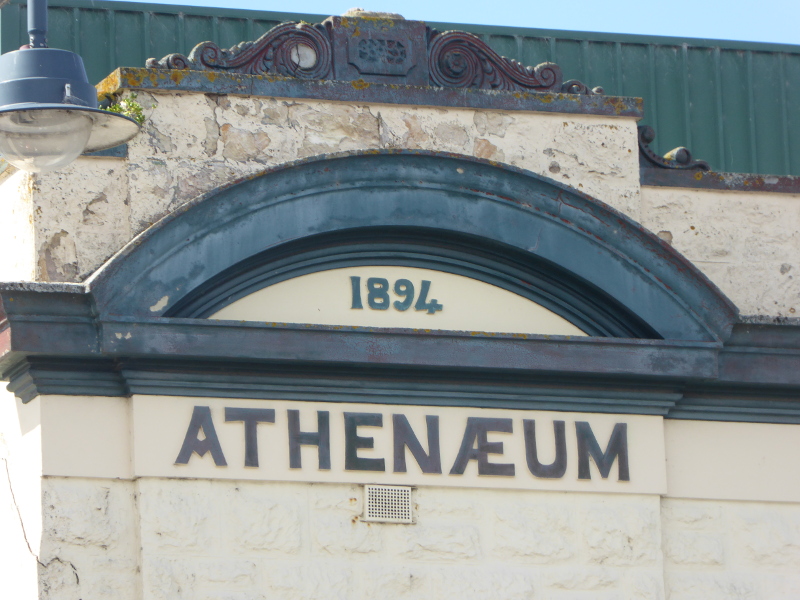 The 1894 – year the Athenaeum opened as an entertainment hall (no films in those days) – still stands up at the top of the front of the building, and there is a sense that the top part of the façade at least dates from that period over 125 years ago. 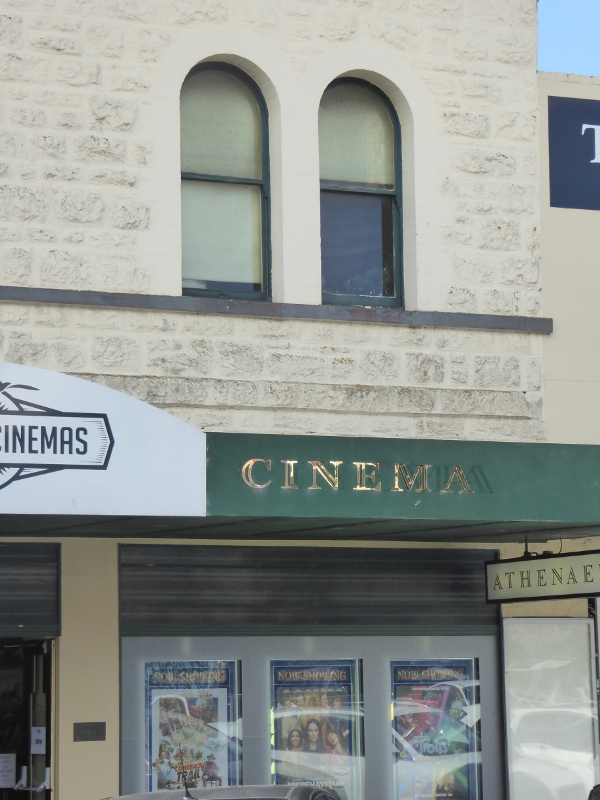 The lower half of the façade, including the entrance, apparently dates from the 1930s, but that also qualifies as vintage in my book, and it retains a nice historic feel on Sorrento’s busy, bustling, boutique-based High Street today.

Inside the foyer things get a bit harder to judge from a Vintage Victoria point of view. I think most of the fittings and décor dates from more recent renovations, but remembering my admiration of a mosaic behind the bar at one of the art deco cinemas in Melbourne, only to get a comment from the artist telling me he did it in the 1980s, I am loth to say anything inside the Athenaeum (or Peninsula Cinema, Sorrento as it is now called) dates from very long ago. 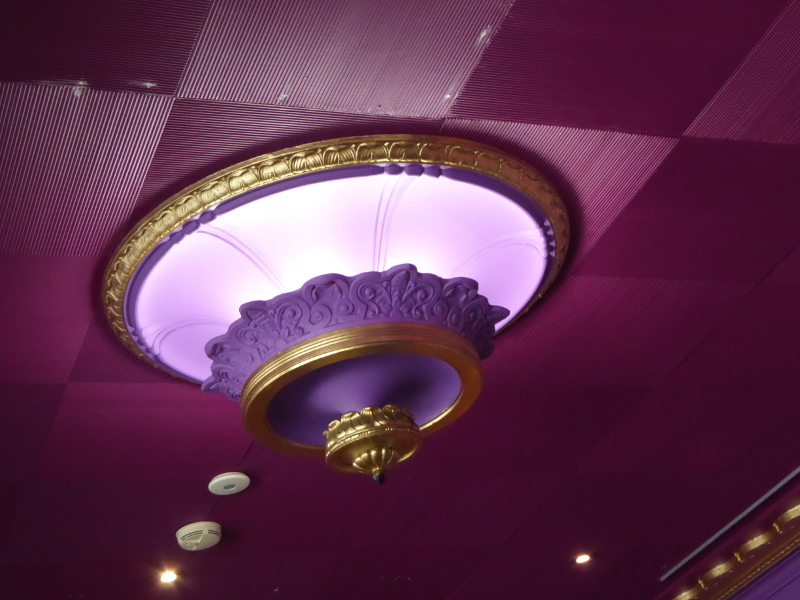 Anyway I quite like the semi-gothic look to some of the fittings, whether they are vintage or put in recently. 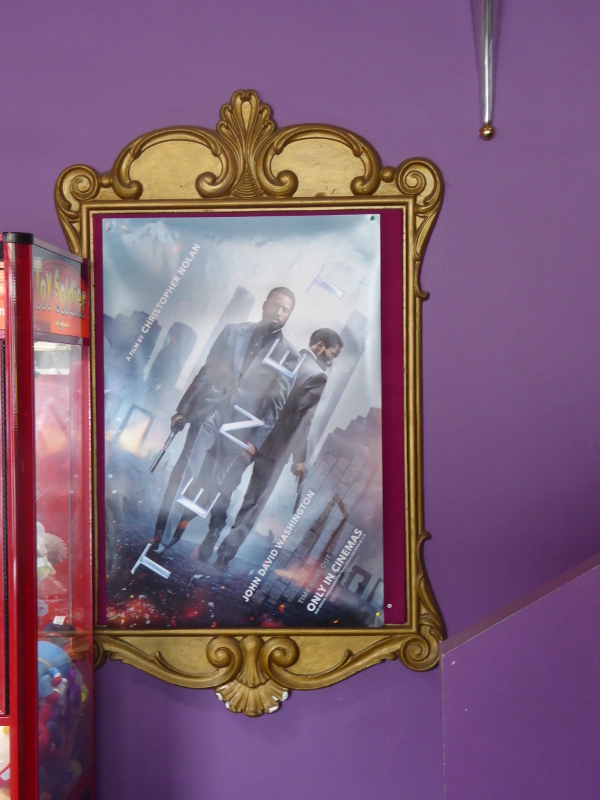 Even the poster for the film we saw had a bit of that goth feel to it. 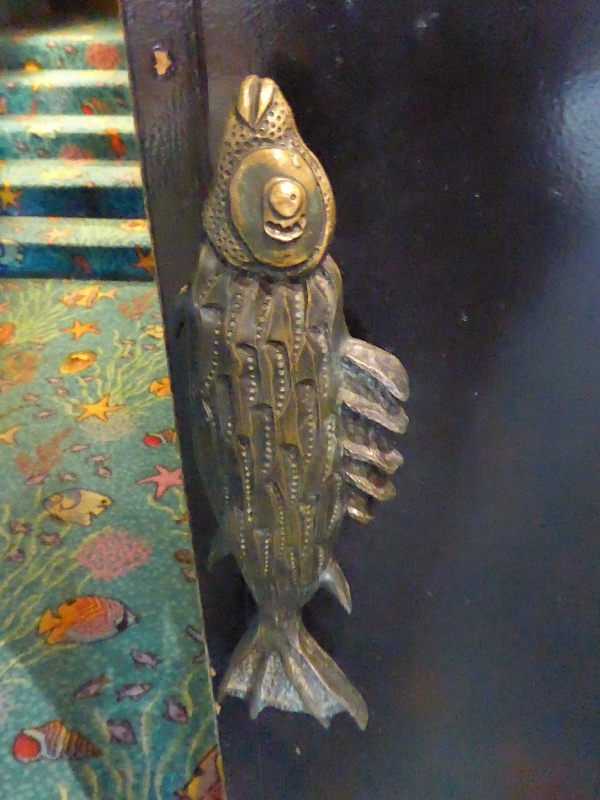 But if you want the vintage cinema experience in Sorrento, make sure you get to see the film showing on Screen 1. I noticed the door handles first, and thought – impressive. I wonder what year these date from?

And then I stuck my head inside – there was no film showing at the time, of course – and found a really lovely ceiling, which surely must date back to the theatre’s early days? 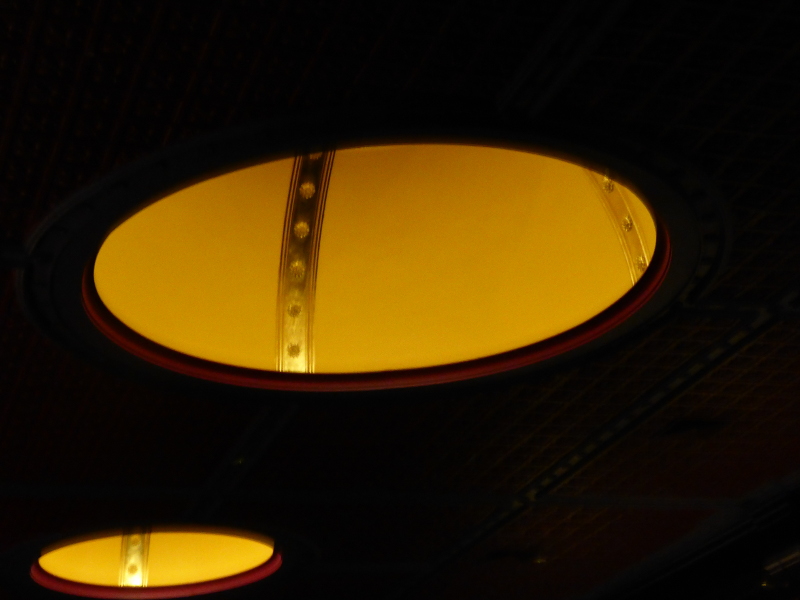 Sadly my camera didn’t really do justice to it, so check out one of the links below, which has much better pictures of this ceiling, with its ornate patterns and vintage lighting.

So for the purposes of this blog entry, there isn’t much else I experienced that’s worth recounting in the Sorrento cinema. And funnily enough, the Athenaeum hardly appeared either in the Trove database on news clippings, so I don’t have too much on the history of the place, either…

Make sure you see a film in Screen 1 to see more of the original features in this cinema.

History and stories about the Peninsula Cinema, Sorrento aka Athenaeum Theatre

The original Hall was built in 1894 for a Mr Isaac Bensilum, who owned the Magnificent Continental Hotel over the road, and was a local councillor, too. A Melbourne newspaper called the theatre a ’boon’ for the town, declaring it booked nearly every night for dancing and other entertainments. It was even used as a skating rink in 1906, apparently.

Films began to be shown here after the end of World War 1, with electricity replacing the previous gas lamps that lit the hall in earlier years.

By 1923, a local shopkeeper David McFarlane had taken on the Athenaeum, and from then on films became the mainstay of the theatre, and talkies introduced not too long after.

Whether it’s the name changes, or the fact that nothing dramatic happened around the place in its early years, but the Trove database didn’t really give me many stories worth recounting here.

I’d love to hear from anyone who can fill in with the missing years or tell us a yarn or two relating to things going on either inside on the screen or in the neighbourhood on Sorrento’s main street.

Other links and writings on the Athenaeum

There is a Victorian Heritage Database entry for the Athenaeum in Sorrento.

The Nepean Conservation Group entry for the Athenaeum, published in 2009, has much better pictures than mine of the inside of Screen 1. Also The Broadsheet in 2015 before the reopening.

There’s a brief entry on the website of the Cinema and Theatre Historical Society of Australia (CATHS).

What are your memories of the Athenaeum Cinema, Sorrento?

Have you ever seen a film at the Athenaeum? What’s your favourite memory of the place?

Is this a place attended mostly by holiday-makers and visitors these days? Or is there a community of locals who regularly attend? Now, or in the past?

Has anyone got any stories to help fill the gaps, since the Trove database for once didn’t really give me much?