The metallic tower of Eastern Lighthouse between Dromana and Rosebud on the Mornington Peninsula might look more like a UFO than its white-stoned sisters, but it served its time after opening in 1884

We parked up about a kilometre from the lighthouse and walked along the beach, paddling in the waters and clambering over the succession of groynes in the sand until we reached the Life Saving Club building, which stands not far from the lighthouse itself at Mccrae. 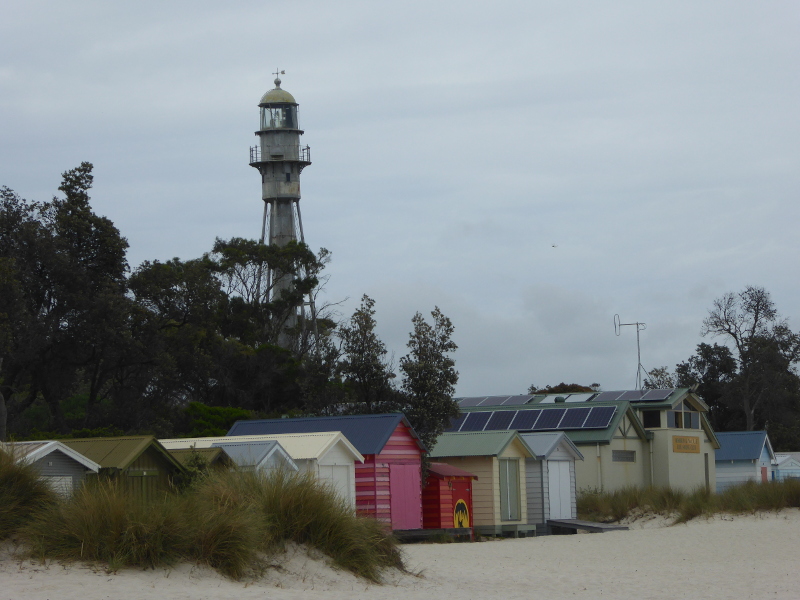 Actually the light poked its head above the tree line already some 200m away, and we could see that it was not your typical white stone cylinder shape you get for most lighthouses in the world.

I’ll come to the lighthouse shape in just a moment, but first a word on those trees that do line the coast here. I remembered the angry correspondent to the newspapers in the 1920s, trying to defend the ‘virgin forest’ along the coast from being chopped down and replaced by buildings. Well, judging by the extent of the forest even today in 2020, he seems to have succeeded, and it was a pleasure to find the lighthouse more or less surrounded by nature rather than modern beachside apartment blocks. 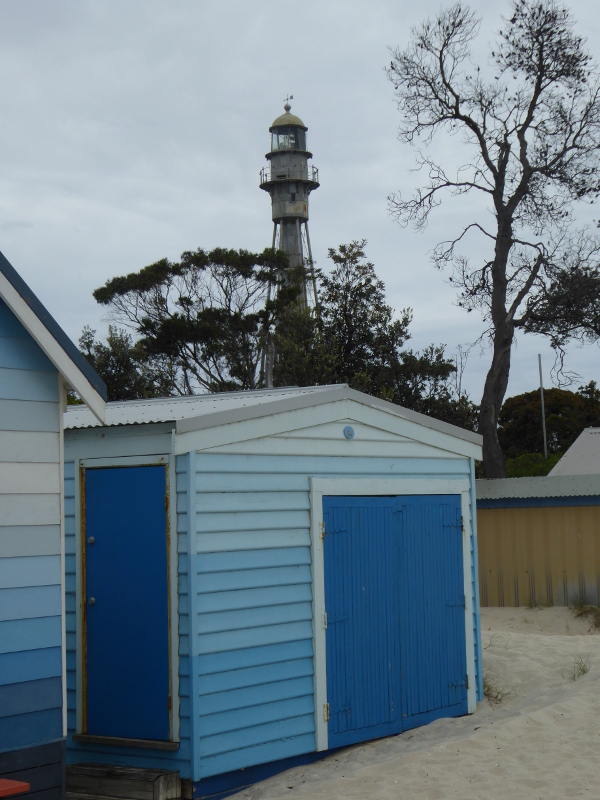 As well as the native trees along the beach, this part of the Mornington Peninsula has lots of colourful boathouses and beach huts providing a lively foreground for the lighthouse, making me wonder if the beach was this colourful when the lighthouse was first built. I actually prefer these beach huts to the much-marketed bathing boxes of Brighton up the coast; the huts between Dromana and Rosebud look much more authentic and just used today by families visiting the area rather than trying to be some tourist feature. 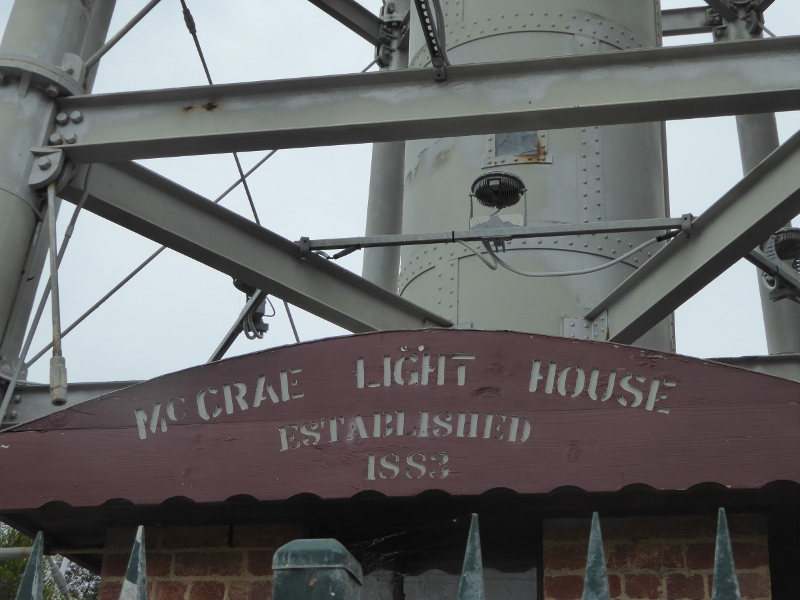 We wound our way round behind the life saving club to the lighthouse perimeter, now locked and fenced off, forming a small border around the base of the tower. That base today is a modern brick addition, but we were pleased to see a useful information board standing in front of the lighthouse, giving the basic story of the lighthouse, from its timber origins, which ended up looking out over the bay from Arthur’s Seat, to the metallic structure we have had here since 1884. 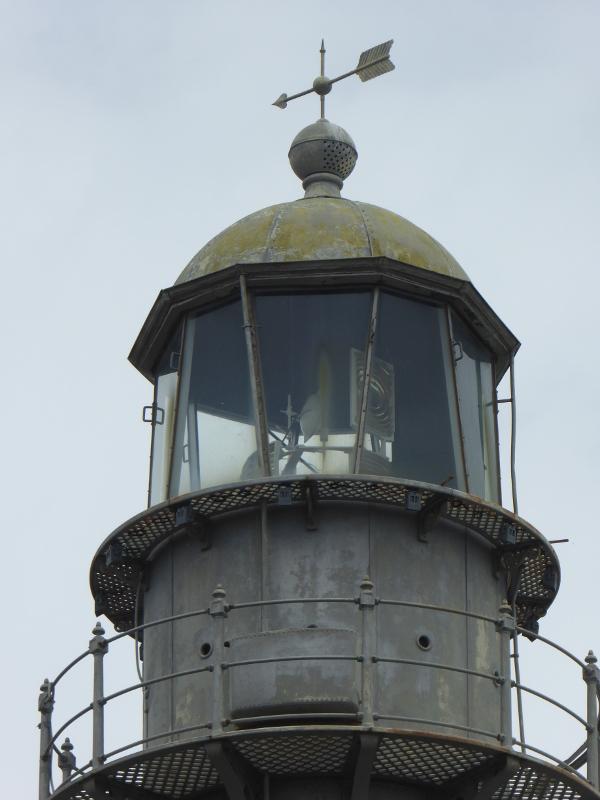 So, although the light itself came like so many others from Chance Brothers in Birmingham, and the top of the building today looks like many other lighthouses along any coastline around the world, the light chamber is looking a bit tired these days: the weathervane still shows the way the wind blows, but I’m not totally sure the light actually works now, and it is certainly not staffed as it once was. 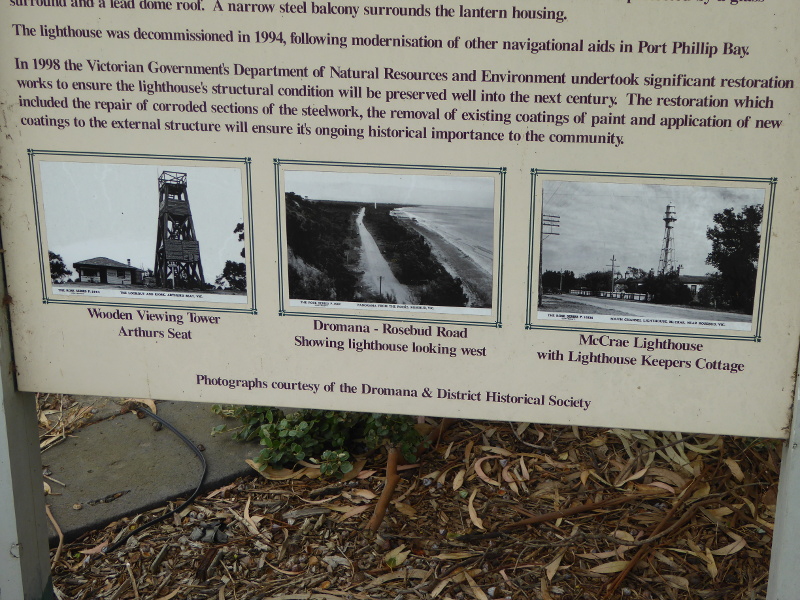 My history search had some interesting observations on the original keepers’ cottages here, and I’m guessing from matching the words of letters from keepers’ kids about walking out of the back door straight onto the beach, that the current residences next to the lighthouse might have been built exactly on the site of the old keepers’ cottages. 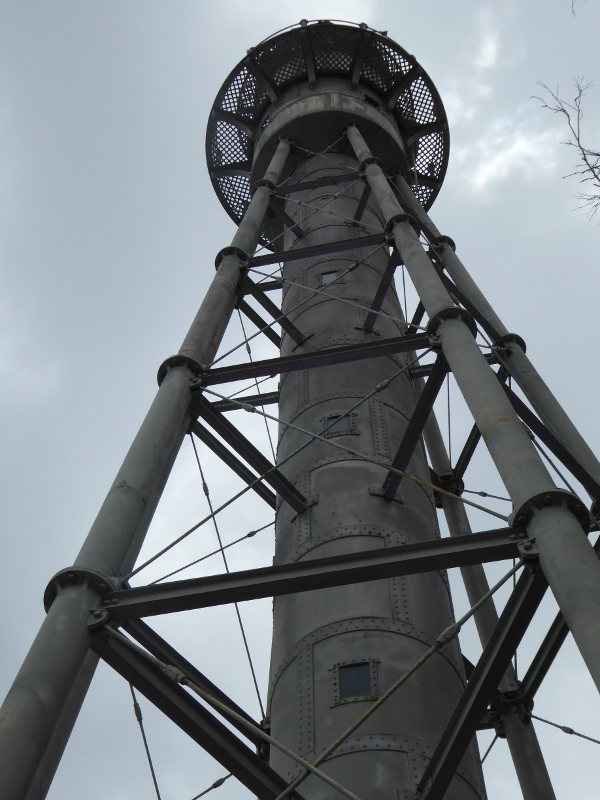 The narrow metallic tower, with windows marking different stages on the way up, apparently has a 120-step spiral staircase inside. Sadly, there are no public visits to McCrae Lighthouse, so I couldn’t get inside to have a look, but that must be a steep and narrow staircase unless my sense of perspective has been misled by being forced to look only from outside. 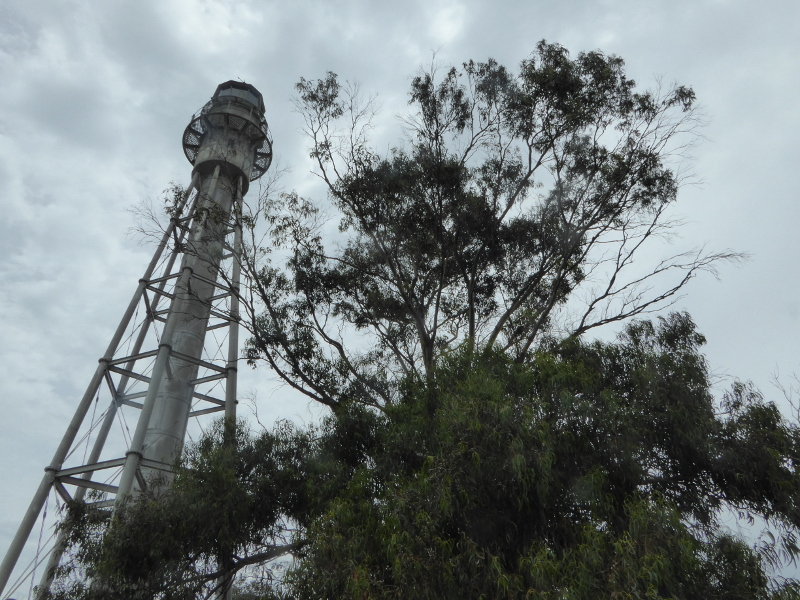 It may not have the majestic beauty of a sleek, white lighthouse, but the McCrae aka Eastern Light, aka South Channel Light, aka Dromana Lighthouse aka Rosebud Lighthouse has a certain imposing charm to it, making me think of War of the Worlds rather than The Light Between Oceans. 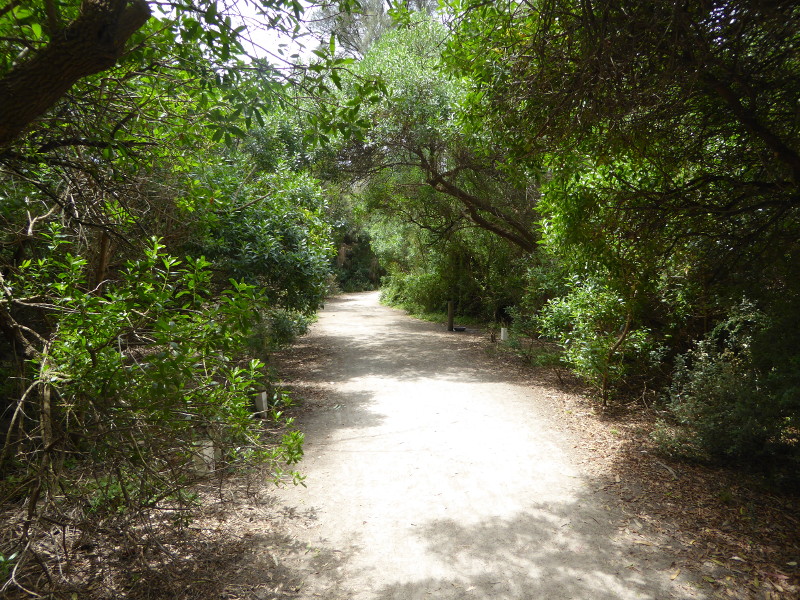 To complete our visit, we took the Bay Trail back along the coast to our car. Here we really got to appreciate the preservation of the native vegetation all along here. The path is shaded, well-worn, with occasional narrow off-shoots down to the beach, and lots of interesting trees to peer at as we made our way back northwards.

No access to this lighthouse, I’m afraid, unless someone knows better…

Toilets along the Bay Trail in one of the car parking areas..

The initial light was built in 1873 (though other sources say there was a light here already in 1854), with timber frame resembling a fire station tower, it was said. Two keepers’ cottages were also built, though The Age at the time criticised the Public Works Department for choosing to build these from wood, which not only had to brought in from other areas, but in the salty sea air would need to be replaced in 10 years, the editorial argued. I’m not sure how long they did survive but they are certainly no longer present in 2020.

By 1877 they had added a white light to the already existing red light. In 1884 both lights were replaced by a more powerful light in the new building.

In 1884 a new lighthouse was built of iron. It was sent over from England by Chance Brothers. It had a spiral staircase with 120 steps. The old lighthouse was moved to Arthur’s Seat as a look-out, where it stood until 1934. 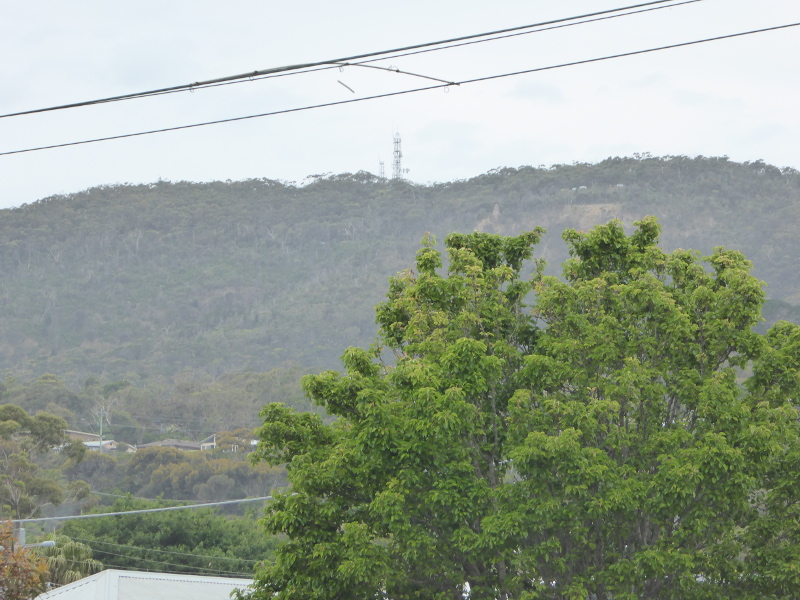 There were not many items on the Trove database about the lighthouse keeper families, but one of the keeper’s kids had a letter to the Leader in 1901. Ernestine E O’H. Blake apparently wrote in very neat hand-writing, and told of how she could be on the beach just beyond her back yard. A month later, another child wrote to the same paper from a different lighthouse household, after moving there from Gabo Island.

In 1904 the keeper at the South Channel Light helped two boys come ashore safely after their small fishing boat had drifted past the lighthouse. It later turned out that the boat had been stolen from the lagoon near Port Melbourne, and the two boys came up with two versions of how they came to be in the boat: one had it that they had been forced into the boat by 6 other boys, who had then cut the mooring rope and they had drifted uncontrollably down the bay; the other admitted that they had taken the boat but pleaded desperation to escape from his hated step-father, and that neither of them (aged 17 and 11) had any knowledge of how to manage a boat, and the older one had been badly sea sick. There were no follow-up reports of what happened when their case came to court…

One night in 1923, the lighthouse keeper was disturbed by a plea for help from a one-legged truck driver, who had driven off the road when his headlights suddenly went out not far from the lighthouse.

In 1924 there were complaints of clearing tea-tree vegetation along the coast near the lighthouse. “Beautiful stretch of virgin forest,” said the correspondent. But in 1936 bushfires started in the scrubland by the lighthouse and spread up the foothills dangerously over a period of 6 weeks.

Over the years there were several stories of ships running aground on the sandbanks near the Lighthouse. Typical of these were two in quick succession in the 1930s,  when ships heading out of the Bay ran aground, one in heavy fog, and the other because the captain mistook this light for another in the bay.

In October 1944 an oar was washed up on the beach near the lighthouse after a fishing boat with three men on board had gone missing.

As usual on Trove, the stories dried up in the 1950s, and the next story I have is of the Light being decommissioned in 1994, and the keepers’ cottages demolished shortly after.

What are your experiences at Mccrae Eastern Lighthouse?

Has anybody got any stories to bring us up-to-date with incidents that made the news from the 1950s to the present day?

Has anybody ever climbed the spiral staircase inside McCrae Lighthouse, and could you describe the experience?

Can anyone remember the keeper’s cottages next to the lighthouse on the beach? Did anybody live or stay there?

Other links and writings on the McCrae Eastern Lighthouse

This is the Lighthouses of Australia website entry on McCrae Lighthouse.

Photographer Julie Powell has a similar approach to my own of visiting lighthouses. This is her 2014-5 take on McCrae Lighthouse

The Seaside Lights is another lighthouse site with an entry on McCrae Lighthouse.

This walking website maps the Bay Trail past the lighthouse.