Malmsbury Viaduct has been looking down over the Botanic Gardens since they opened in the 1860s. Not many brass bands playing these days, or town hall dances after a gardens picnic, though.

What a treat it was to start our tour of Victoria’s Botanical Gardens with a visit to Malmsbury. The road through this small township between Bendigo and Castlemaine is quieter now than it used to be when the main Calder Highway passed through here, until the Freeway was built in 2008. 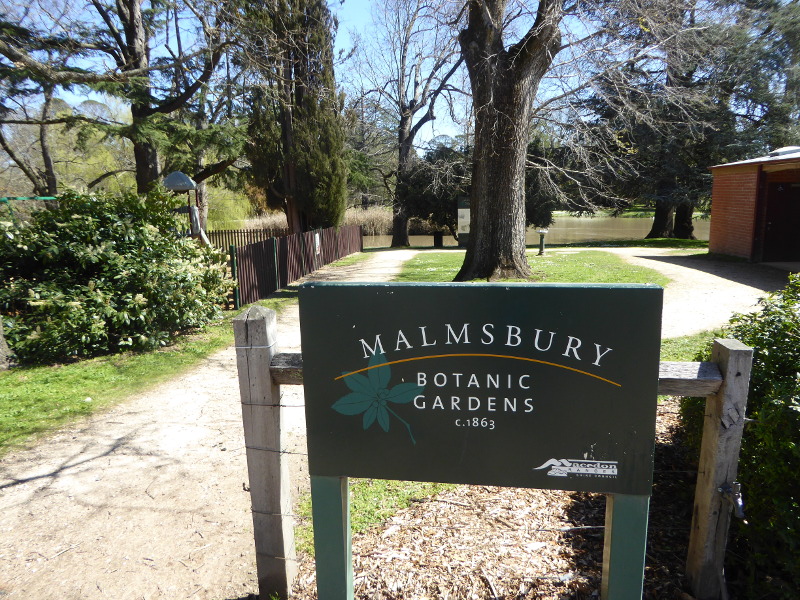 But the entrance to the Botanical Gardens stands right by where the Calder used to pass and from the road you can usually spot the geese that rule the roost round here these days, either wandering across the road or gliding over the lagoon which is also visible from the road.

Malmsbury Botanical Gardens sit right next to the Coliban River, and the Malmsbury Reservoir, which presumably supplies a lot of the water round these parts. 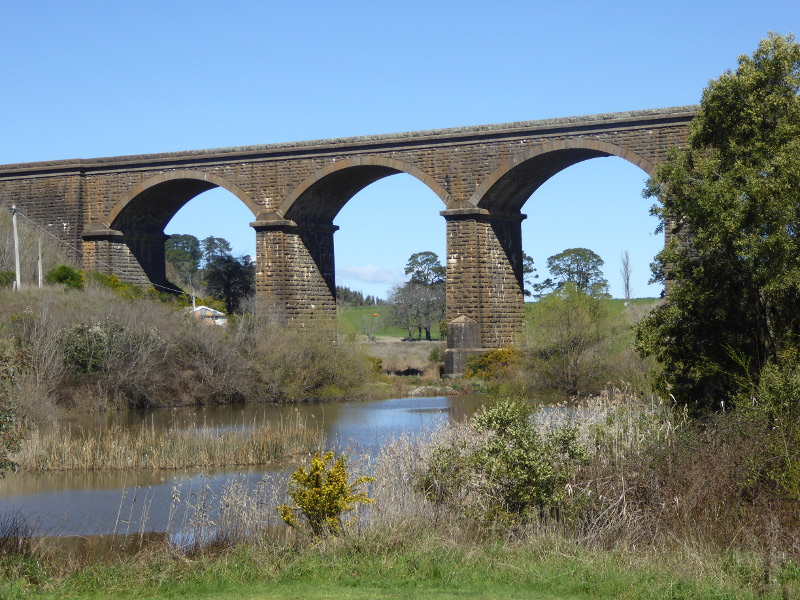 At the back of the Gardens, but not visible from the main road, unless you really know where to look, stands the very impressive Malmsbury Viaduct. As we walked round the Gardens, we kept getting glimpses of this magnificent 5-arched bluestone structure, which is worth a visit in its own right.

The railway line is still in use today, and we saw the V-Line train to Bendigo trundle past at one point, though if you’re on the train, you don’t get these views of the viaduct itself, so you need to be in Malmsbury to see this perspective. 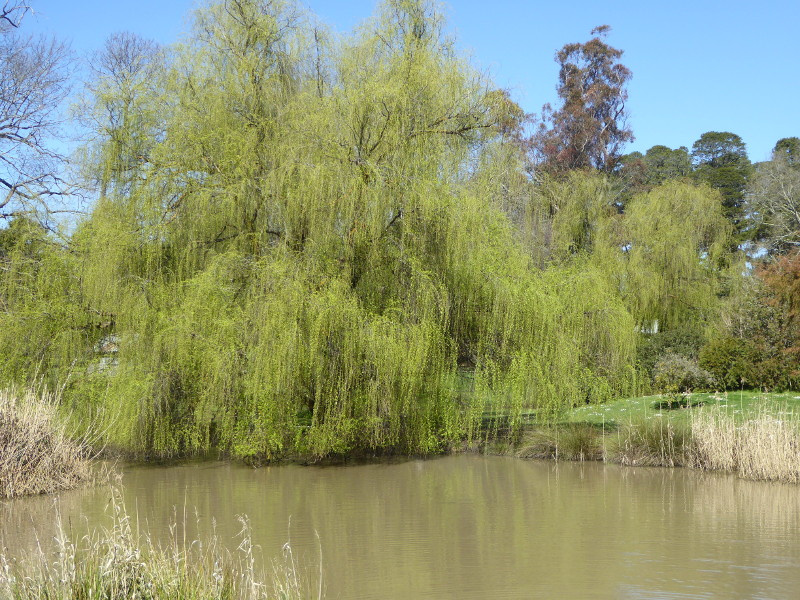 Early descriptions of these Botanical Gardens speak of the willows ‘bending into the lagoon’, and sure enough they were still there in 2020, just coming into spring-like green. 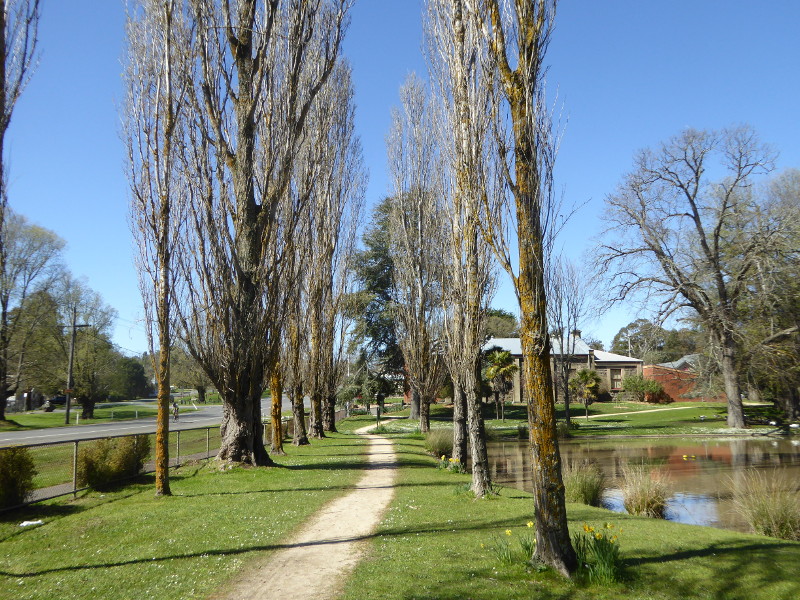 I didn’t notice many roses on our walk round (mentioned in an 1874 description) but the avenue of poplars is still there, forming a natural race track for kids’ events in carnivals of years gone by. It was too early in the spring for them to be in leaf, but they were impressive nonetheless, even if many of them are younger trees rather than the original poplars planted in the 1870s. 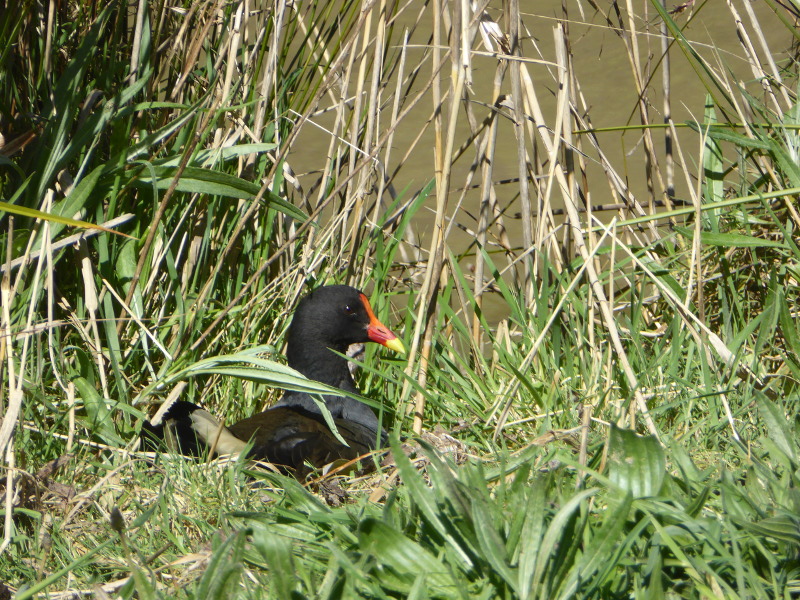 The geese, ducks, moorhens and other birds are fun to watch both on the Coliban river itself or on the lagoon in the middle of the Gardens, though I’m not sure one family of picnickers would agree, as their young toddler was rushed by half a dozen squawking geese when they opened up their lunch boxes on the picnic tables in the shade. 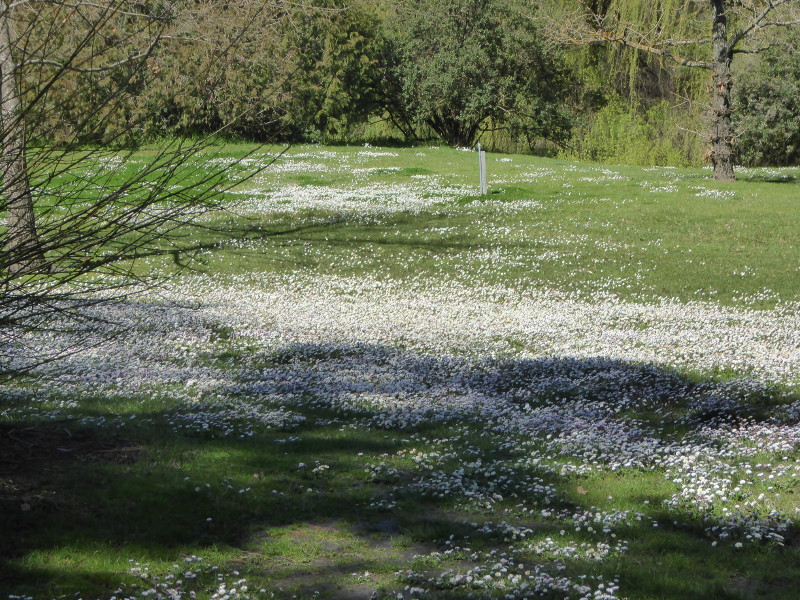 The daffodils were just starting to fade when we visited in mid-September, but there was the rich, musky smell of blossom filling the air as we entered the Gardens.

The map of the gardens is worth a look before you walk around. It speaks of three distinct zones: Coniferous, Garden, and Riverside. When you walk around, though, they just blend into each other. 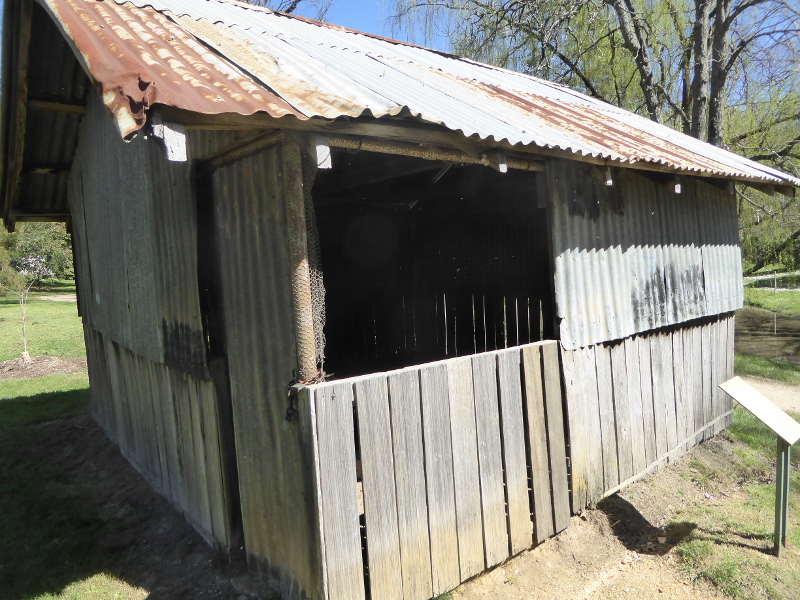 This fish hatchery was used to store trout from the 1890s to the 1960s. It looks a bit tumbledown now from the outside, but inside is the deep stone well where the fish were once kept. 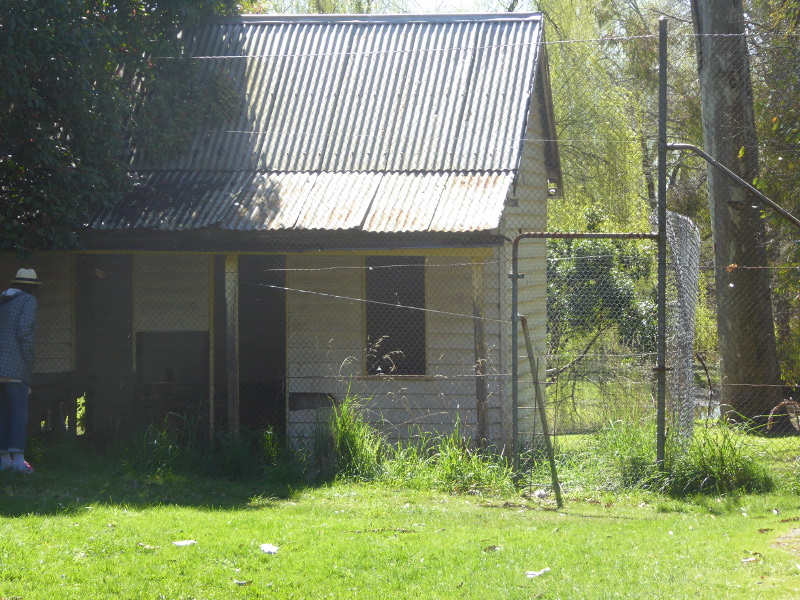 Round the back towards the viaduct are two tennis courts, now overgrown and disused, as with so many tennis facilities in Australia. The cute vintage clubhouse looked perfect for a quick change and/or a place to serve tea in between sets, and what a fabulous setting, surrounded by cypress and other conifers as you play. I’d love to start playing again if this was my local. 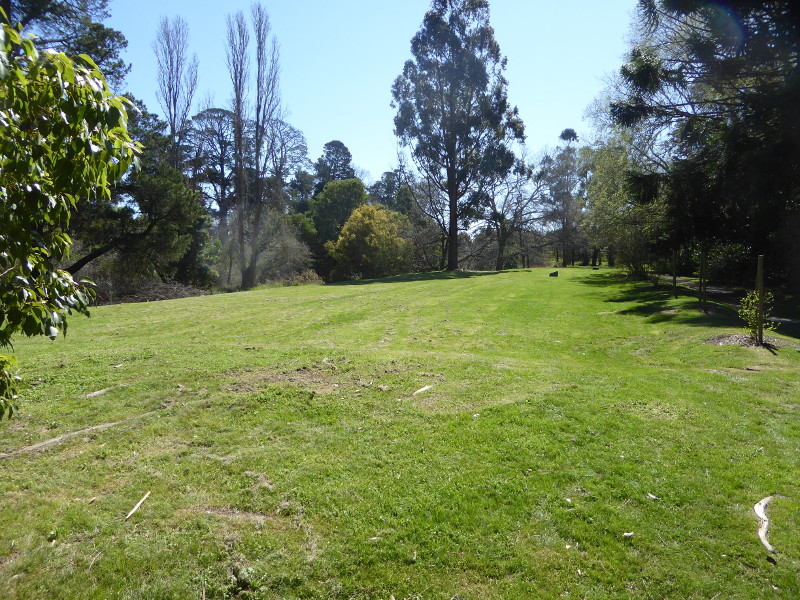 Further round is a small open grassed area, which was once apparently the bowling green. It only survived eight years, from 1882 to 1890, according to an information board nearby, before it was replaced in popularity by the then growing sport of tennis. Seems a shame also, especially given the popularity of bowls in Australia today, and they got rid of the pavilion that used to stand near the green, too. 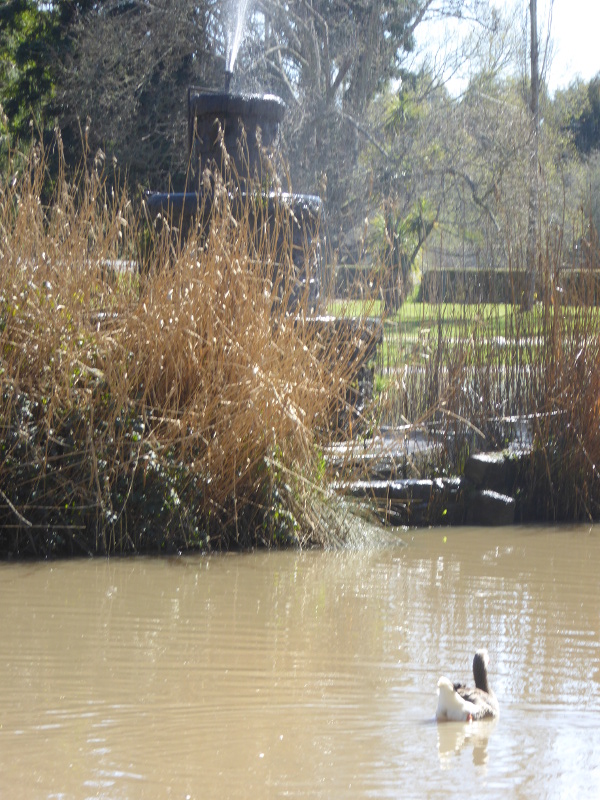 The bluestone water fountain was originally built in the 1930s, and although it was rebuilt in the 1990s, it’s still a lovely feature of the lagoon which is the centrepiece of Malmsbury’s Botanical Gardens. 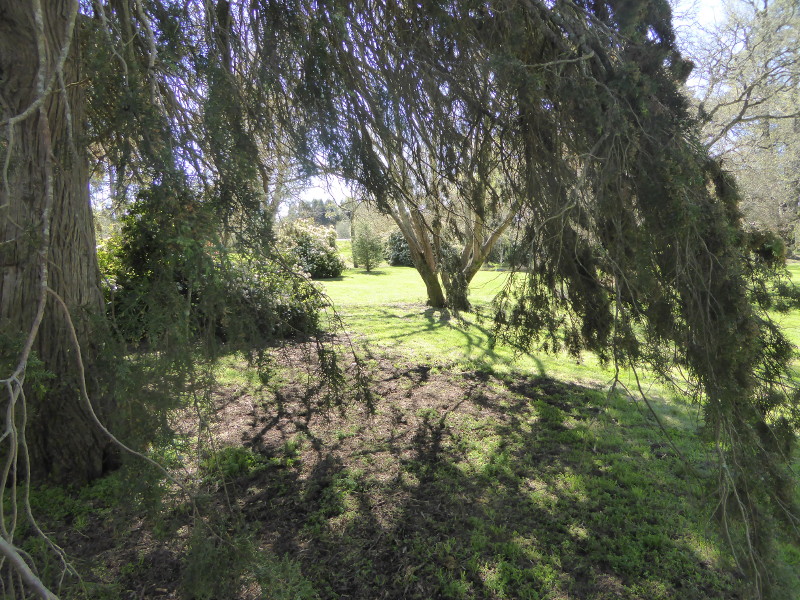 We were there on a day of reasonable temperatures, but we could so easily imagine being here on a hot summer’s day and sitting in the shade of one of the enormous trees that stand cleverly spaced all around the Gardens. That, after all, is what most of the picnic parties used to do over 100 years ago. 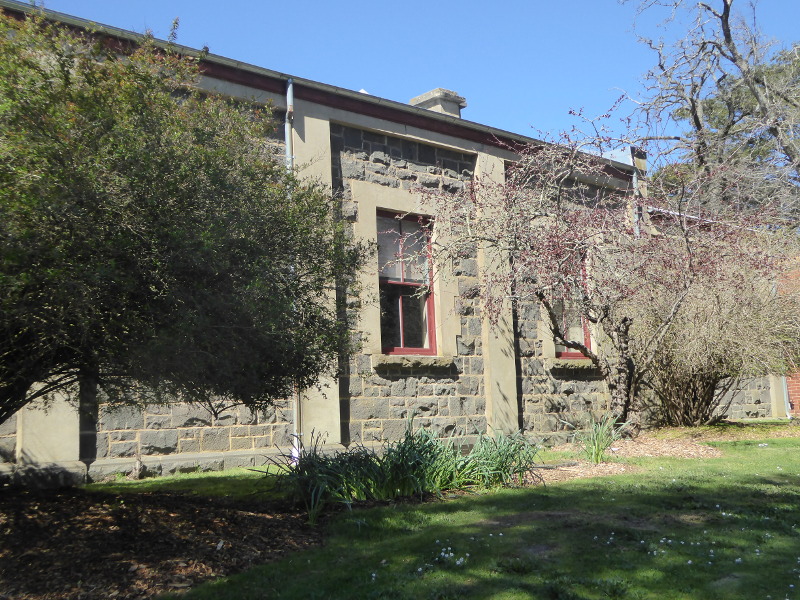 The Malmsbury Town Hall has modern brick ends to its front and back but the main body of it is local bluestone, and you can see how those picnic parties on company outings would easily end up here for an afternoon dance or a cup of tea. I read that they even used to show films here once upon a time. What a shame they don’t still, or I could have added it to my Vintage Theatres section on Vintage Victoria.

There are no gates into Malmsbury Botanic Gardens, so entry is free 7 days a week at any time.

Toilets in the gardens.

Malmsbury Botanic Gardens opened in either 1863 or 1865 depending on the source.

The Kyneton Observer newspaper in 1872 called them “one of the most attractive retreats in the district.” They called them unpretentious, with views of the viaduct; willows bending into the lagoon. Wild duck and water hens on the island in the middle.

Another newspaper description from December 1874 spoke of lots of roses, poplars along the south side; “The town would be a wilderness without the gardens and the reservoir nearby,” it said.

The 1899 Castlemaine Presbyterian School Picnic outing was to Malmsbury Botanical Gardens. That same summer the Bendigo District Foresters held their annual picnic there, too. A couple of years later there were reports of the Thompson Foundry holding its annual picnic there also. So this was a go-to spot for picnics at the turn of the century.

The Foundry picnic had a report in the Mount Alexander Mail, which spoke of the two special trains from Castlemaine being packed with participants at 8am and 9am. The party was met by Malmsbury councillors, and there were various races and competitions through the day, the one getting special mention being the ‘tilting at the bucket’, though I can’t quite visualise what that would have involved. Most people gathered in small parties under trees to eat, but there was also a VIP tent, with the Thompson’s big wigs and the Mayor of Castlemaine there, too. This was a big event in the district calendar.

There was dancing in Malmsbury Town Hall and the Foundry Band played on. The results of the various competitions were also published, some of them with intriguing names such as the ‘Siamese Race;’ and the “Umbrella and Smoking Race.” Anyone know what these involved? Another report from 1904 of the same outing also had a Cotton Reel Race for ladies – any ideas? And I dread to think what the ‘Whistling Coon Race’ in 1906 might have involved…

And I’m pleased to report that the newspaper concluded that through the day ‘no bitch or unpleasantness of any kind occurred.” How language use has changed…

The size and scale of these picnics was given in a report on another picnic out of Castlemaine in 1904, when 700 people attended, apparently. This was the Castlemaine Traders’ Picnic, and many boarded the special train at Chewton’s station, now long gone of course.

After a fairly uneventful but pleasant enough series of annual picnics held at the Malmsbury Botanical Gardens, there was drama on the gardens footpath in February 1915. The licensee of the Malmsbury Hotel was in the gardens to collect some ornamental grasses for his dining room tables when he suddenly collapsed and died. There were local invitations to join his funeral cortege but no further information on what happened to the poor man. 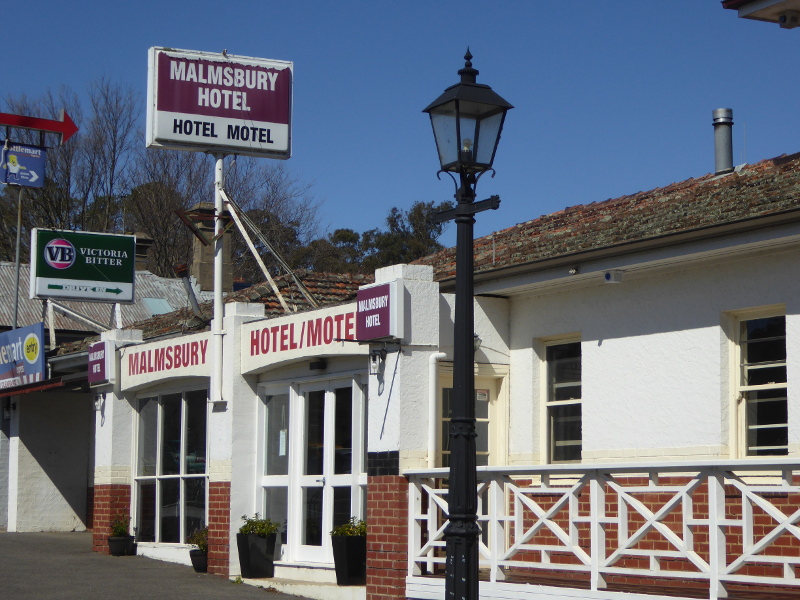 We walked along to take a quick look at the Hotel, still there in 2020, and to imagine Mr Muller just popping down to the gardens to collect some grasses for his dining room. A tragic story, but in a way also nice to die doing something you love, which connects your home and your community.

One of the links below speaks of a Reverend Wood, who, with the Mansions Community, in the 1970s began the work of restoring the Gardens and clearing some of the overgrown areas.

What are your experiences at Malmsbury Botanic Gardens?

Has anybody got any stories to bring us up-to-date with incidents that made the news from the 1950s to the present day?

Can anybody enlighten me on how those weirdly-sounding race names actually happened? What did the ‘Siamese Race;’ the “Umbrella and Smoking Race,” the Cotton Reel Race for ladies, or the ‘Whistling Coon Race’ consisted of?

Or does anyone just have a good memory about a visit to Malmsbury Botanic Gardens that they’d like to share here?

Has anyone got early memories of seeing a film at the Malmsbury Town Hall? When was that and which film?

Other links and writings on the Malmsbury Botanic Gardens

This web page provides the best history of the Gardens that I have seen. I liked how similar the avenue of poplars is to the present-day.

Autumn colours are to the fore in this 2015 post from Weekend Notes blog.

The HeathHill blogger appears to have stopped posting in 2011, but not before they visited Malmsbury Botanic Gardens in 2008. In winter this time.

When the ABC visited the Gardens in March 2011, the fountain was turned off due to water shortages (not long after the area was to be drenched in rain, funnily enough)

I rather liked this short story published by Jeffrey Niemann in April 2020, set in Malmsbury Botanic Gardens. There’s even a recommendation for coffee in it, which is what I used to do for every post…