Another vintage cinema in Melbourne’s suburbs, with a modern look in 2020, but still some original features from the 1912 building, like the tiled staircase with ironwork banisters

I really enjoyed my experience at the Lido Theatre in Glenferrie. 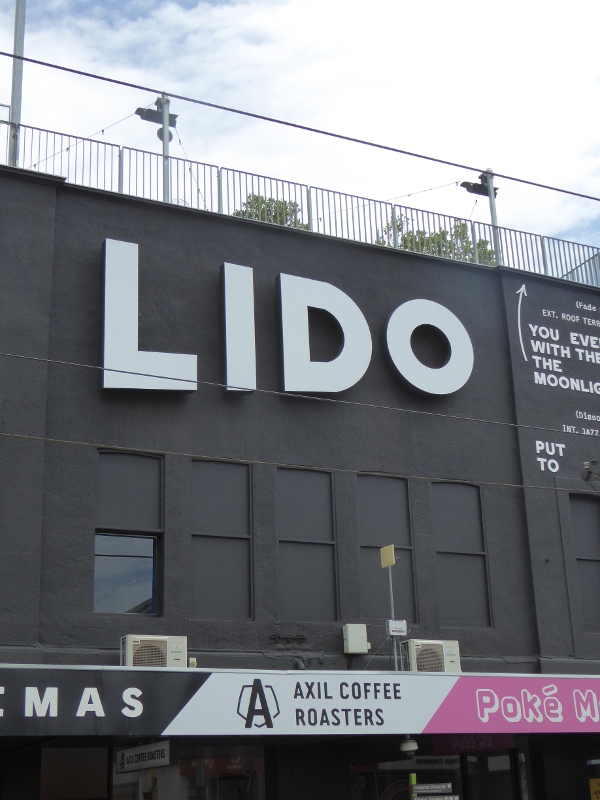 I know it’s a quiet time to see a film at 10.45am on a Sunday morning, but if the staff are nearly as friendly most of the time, this is probably the best cinema experience I have had, with the possible exception of the Regent in Ballarat.

Basically, as soon as I expressed an interest in the history of the building as I bought my tickets, the guy behind the counter offered to take me round and show me some of the original features. 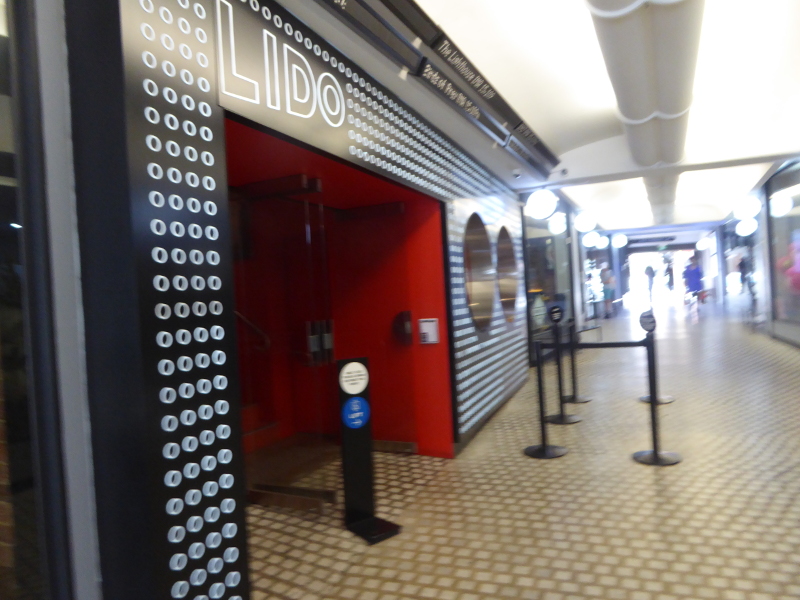 And on my way out, when I chatted with the woman at the kiosk down in the arcade below the theatre, she got into a whole conversation about which film I’d seen and whether I’d enjoyed it. Now, you can’t always expect cinema staff to be cinema or movie enthusiasts, but it sure makes a difference when they are, so thanks to everyone at the Lido for topping and tailing this vintage cinema experience.

I’m so glad I got shown the original vintage features because on my own I might not have spotted any, in this example of an old theatre building which has been completely modernised. 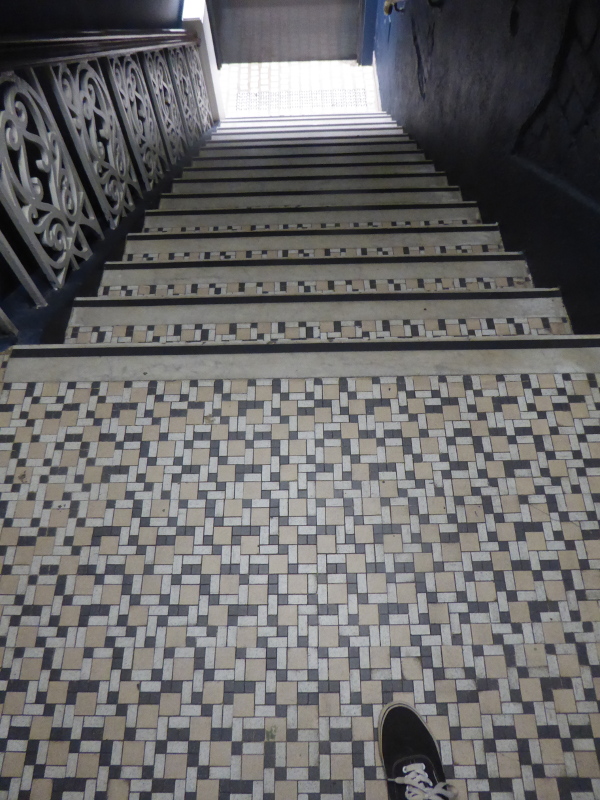 The new owners, apparently, were keen to retain what they could, so it was great to see the tiled staircase up from the ground floor. 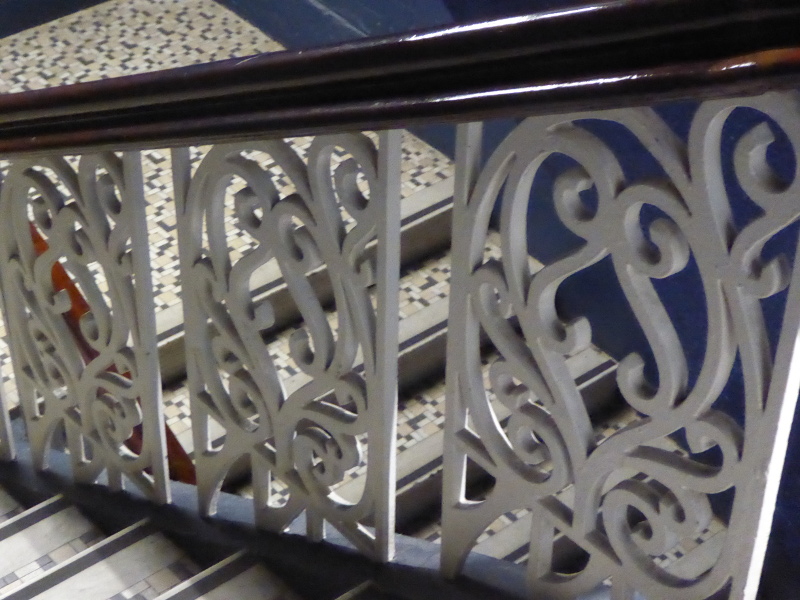 With its ironwork banisters. 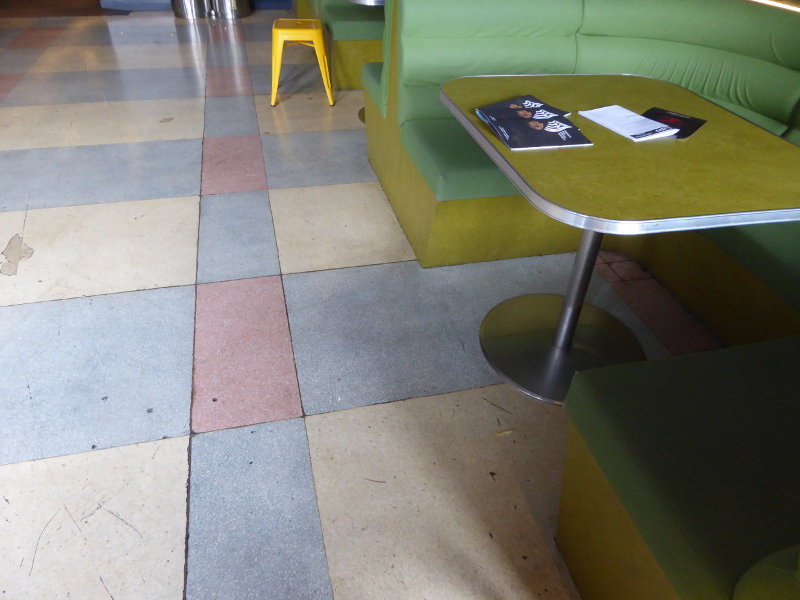 Then there was the flooring of what is now a sitting area for coffee or a snack. The seating looked fairly vintage (50s maybe?), but the flooring much older. 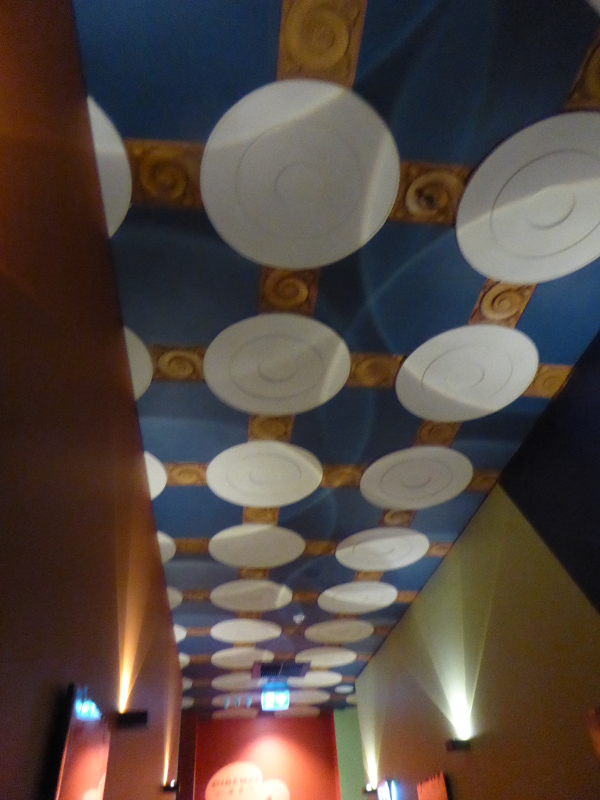 And the ceilings in many parts of the Lido are vintage, too. 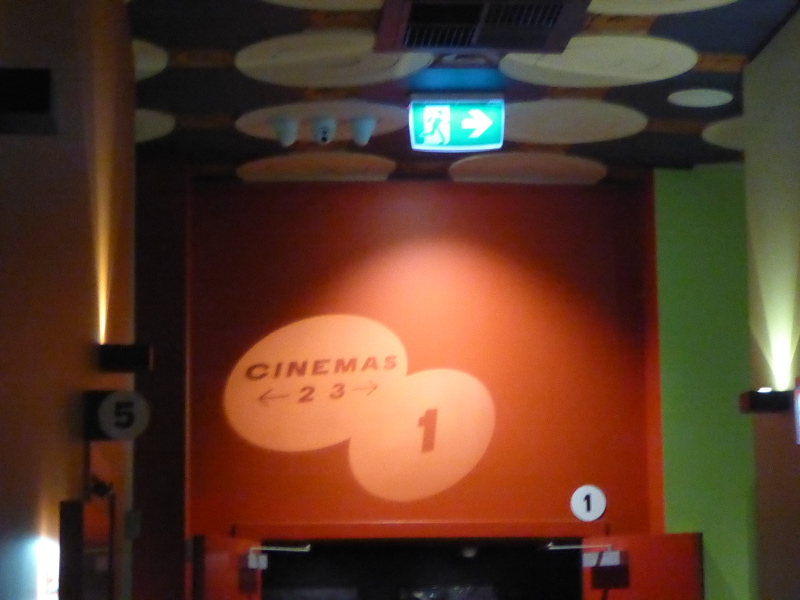 You need to go into Cinema 1 to be in what used to be the old dress circle, and although I was shown inside briefly, it was dark and I couldn’t see much, so I’ll be back to see another film there before too long, I think.

Some of the pillars are original, too, I was told, but again that was lost in the gloomy, pre-film light I’m afraid.

I liked the Lido, though. 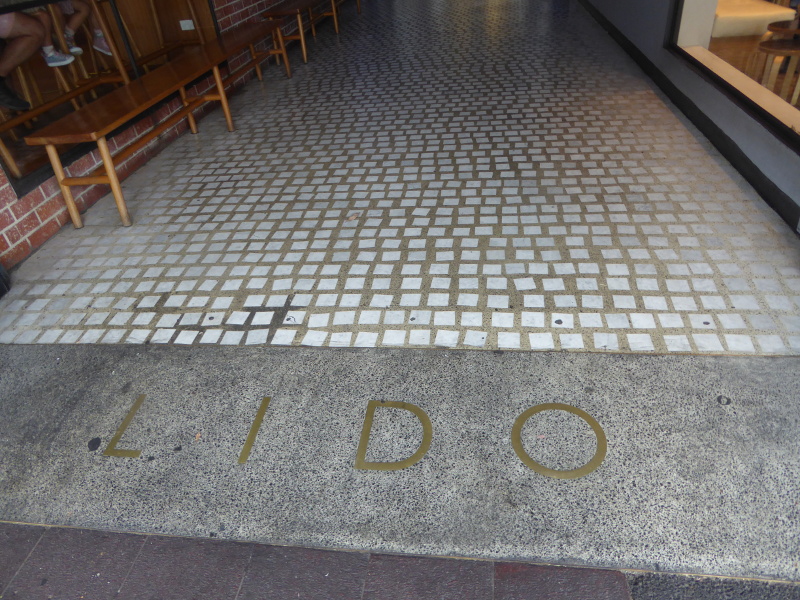 It’s in a 1912 building, fairly simple from the front. 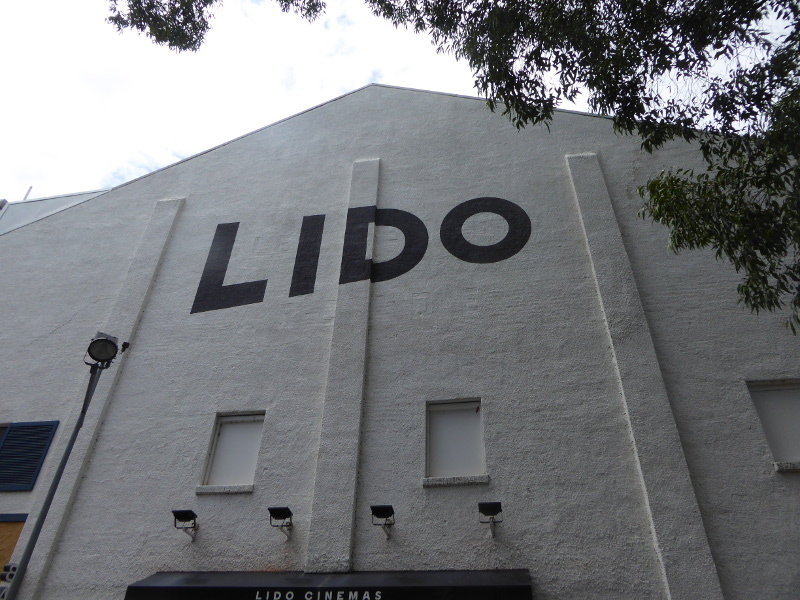 But the arcade is a nice touch, and the modern décor of the entrance has a stylish look to it.

Above all, the films on show are top quality, with about 5 films I could have happily seen that day if I’d had more time.

I paid less than $20 to see a film on Sunday matinee. Buy tickets either in the arcade window half way down the arcade; or upstairs in the cinema itself

Don’t miss the toilets. In the gents, at least, you have the walls covered in film screenplays. I don’t normally take photos inside toilets so in my rush didn’t work on focus, but this at least gives you the feel of the wallpaper – you could easily spend the whole day in there! 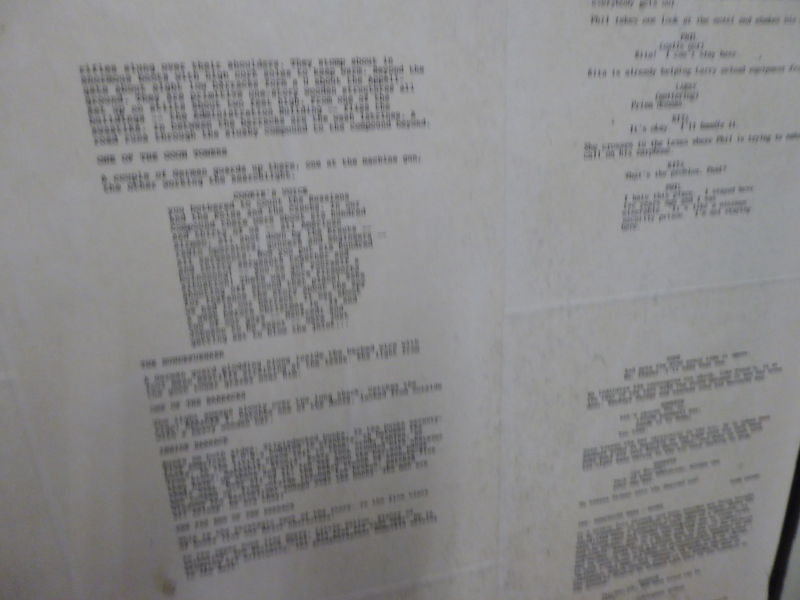 Glenferrie is the nearest train station.

History and stories about the Lido Cinema aka Glenferrie Theatre

A 1912 Australian silent movie (all copies of which are now lost, sadly) called The Love Tyrant was screened on the Glenferrie Theatre’s opening night on 6 April that year. It was a movie with a bushranger theme, and a love angle, so clearly a bit of Ned Kelly in there somewhere to excite Melbourne suburb audiences.

This theatre began life as the Glenferrie Theatre and I loved the ad placed by the owners in the papers a day or so before the opening night: “The Eastern suburbs were in want of a first class up-to-date picture theatre.” The new venue was, they claimed: “fitted with every comfort and modern appliance, as well as being furnished with luxuriant and comfortable chairs.” Rather strikingly, though, they added: “It is one of the safest theatres in the State…with more escape exits than is required by law…” It seated 1800 people, and had 8 fire exits!

The building – according to the Lido website today –  – included a billiards salon and a tea room – I wonder if that was where the big open spaced seating area is now, with that old flooring? Anyway, the Australian professional billiards (I didn’t know there were professional billiards players quite frankly) put on a performance to open the billiards hall that night, too.

It’s easy to forget how back then over 100 years ago, the cinema had become people’s source for visual news broadcasts. The Glenferrie quickly advertised images of crashed railway carriages from an accident in 1912, and the screening of the Melbourne Cup, which was probably the first time many people had seen the race for real. And filming of Scott’s Antarctic mission in 1913 must have been quite a draw for audiences who would never have felt part of such an adventure in the past.

I also liked the idea of the film ‘Argentine Tango’ in 1913, reflecting the ‘present craze in London’ – I had no idea the Argentine tango came to London so early…The Glenferrie Theatre Orchestra played the ‘actual’ music the main characters were dancing to!

The 1913 film programmes included a lot of work which would be familiar to audiences over 100 years later: Sherlock Holmes in one film; Victor Hugo’s “Les Miserables” shown one week; and Sarah Bernhardt appeared in a French film that year, too.

If there were robberies or other dastardly deeds at the Glenferrie, they didn’t make the news. April 1915 saw a classified ad in The Argus: “Person who picked up fur by mistake in the dress circle, kindly return to the manager. Reward.” I wonder if they did…People obviously dressed up to go to the flicks, though. In 1916 another classified ad asked for information about the ‘black seal muff’ left behind after a film in the dress circle.

In September 1915 a minor road accident involving two motorcycles clipping each other in the middle of the road outside the Theatre ended up in an extraordinarily drawn out case in court with a dozen or so witnesses. Sympathies might have been with the defendant, who had just returned from active service near Gallipoli, but he lost his case and had to pay the fine of 40 shillings.

A little girl of 8 was knocked over and killed running across the road after leaving the cinema in 1916.

The theatre manager was fined in 1917 for allowing 20 or 30 kids to be parked in the gangways by their parents.

Sister Faith’s report of her visit to the Glenferrie Theatre also raised a few eyebrows in 1917: “The conduct of scores of college boys and girls who were congregated in the back of the theatre was so disgraceful that they were an absolute disgrace to their college badges…They could be seen acting in a way that would have made their parents shiver could they have seen them.” Apparently a college representative defended the kids saying it was the parents’ fault but that “even college girls and boys were young animals, and if left alone in darkened rooms, the animal instinct would come uppermost…”

So the Glenferrie survived World War 1, with lots of its staff volunteering for active service, but just four days after Armistice Day, a fire broke out when a film tore. A fair bit of film reel was destroyed and it led to the cancelling of the Saturday matinee but the theatre kept going otherwise.

The Trove stories dry up with that end of WW1 fire, though, so I’ve no idea what led the picture theatre to close in the 1920s and the building live on as a dance hall for some years. Was that like the Elsternwick Theatre, with other cinema rivals opening up and money to be made in dance? Press coverage of the switch looks non-existent so I have no idea.

By 1939, film was back, though, with the New Glen Theatre opening for 20 years until the arrival of TV. Trove was low on good stories around the New Glen, too, though, with just a few film programmes appearing in the press archive for the first few years of WW2, but other than that, nothing in the way of stories linked to the building.

It’s back to the Lido Website today to learn that the 60s-80s saw the building used for dance studios, music rooms and cabaret theatre, but it was not until 2013, when the current owners, the Tamirs, bought the building and made it into the vintage/modern mix it is today. (don’t forget, these same guys also own the Classic, Elsternwick, reviewed a few weeks ago, so we have a lot to thank them for).

Other links and writings on the Lido

The Herald Sun also profiled the Tamirs, who sound like folk after my own heart. This piece also interviews locals who have been coming here for 60 years.

Also The Broadsheet in 2015 before the reopening.

The Cinema Treasures entry for the Lido has a photo which pre-dates the 2015 refurb.

And finally, a great video seeing owner Eddie Tamir speak about his Lido concept – nice talk of the energy here.

What are your memories of the Lido Cinema?

Have you been a regular at the Lido since it reopened its doors in 2015? Or did you go in earlier days when it was known as the New Glen Theatre? If yes to either, do tell us what’s been your favourite film or best night out there.

Don’t make my mistake and walk round the other way from Glenferrie Station to get to the main Axil Coffee Roasters HQ. There is a perfectly good branch of this excellent coffee shop underneath the cinema in Glenferrie Road