The original Kyneton Botanic Gardens, opened in 1861, extended down to the Campaspe River & regularly flooded in the early years. A picnic & a swim in the river baths was a common activity back then

We visited Kyneton Botanical Gardens on a breezy spring morning, probably too early for Sunday strollers to be out in large numbers, but the children’s play area was alive with action and squealing. 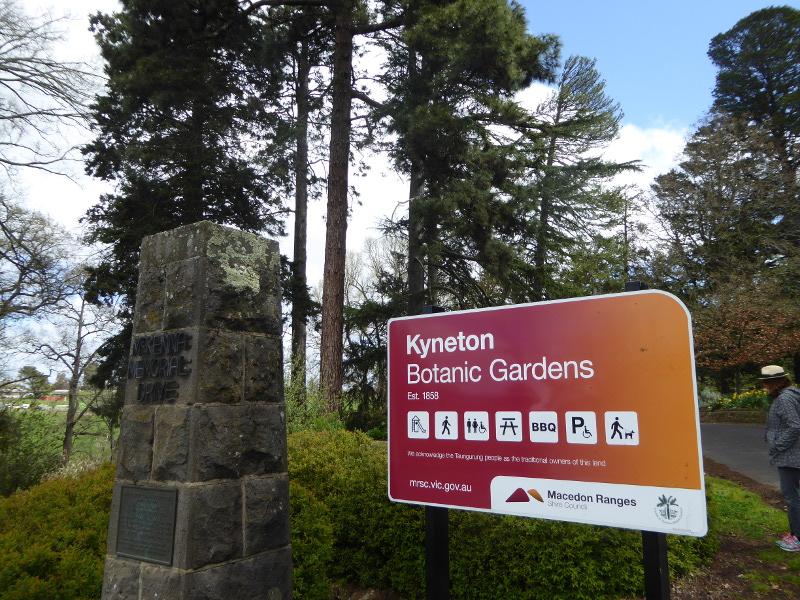 The Gardens are bordered by the Campaspe River, which curves gently round two sides out of four and, as I’ll explain below, the riverside walk actually became our highlight, so is not to be missed. 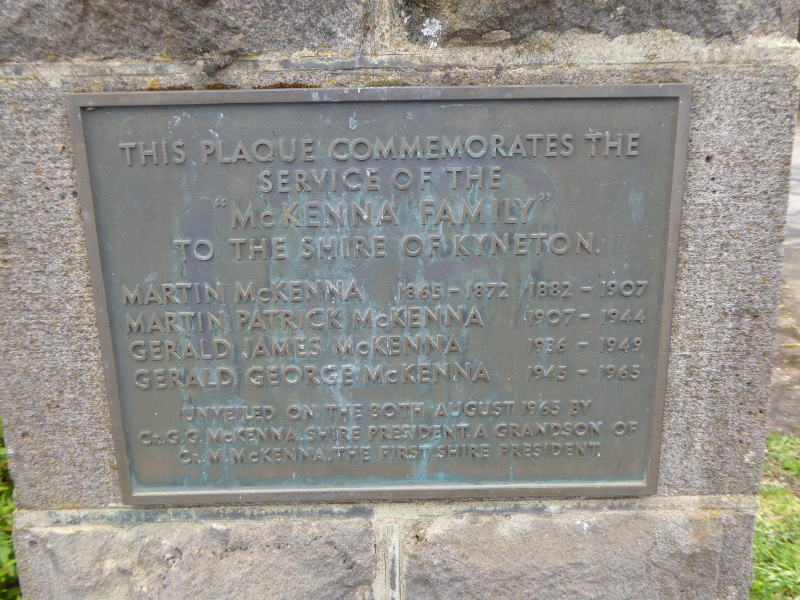 We entered via the gateway dedicated to the local McKenna family, which seems to have been involved with the gardens and the Kyneton community for many generations. 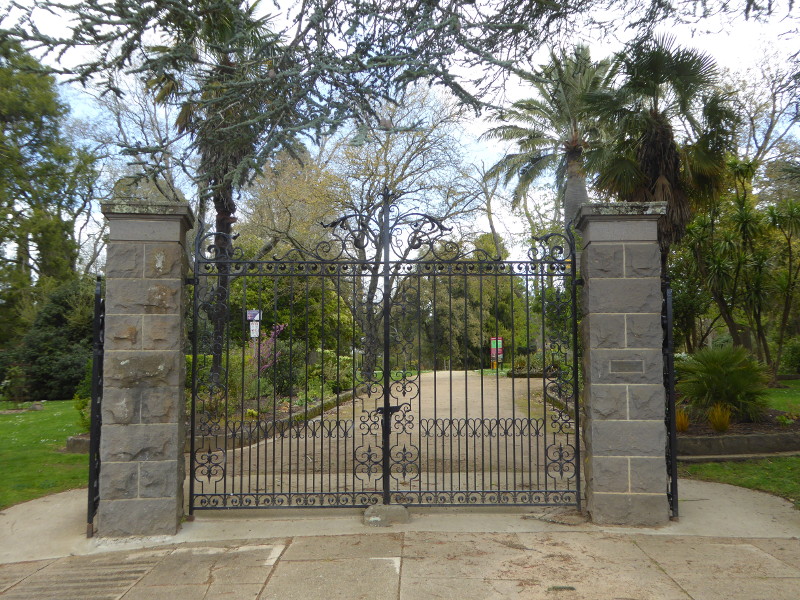 To our left immediately on entering, we looked down the stone steps that led to the river, and resolved to make sure we took them at some point in our visit.

People must have been climbing these stairs for decades now, so they have many a tale to tell, though sadly in one of the stories I discovered via Trove, the steep slope down from the gardens to the river also had its drama and tragedies, when young folk chose not to take those steps… 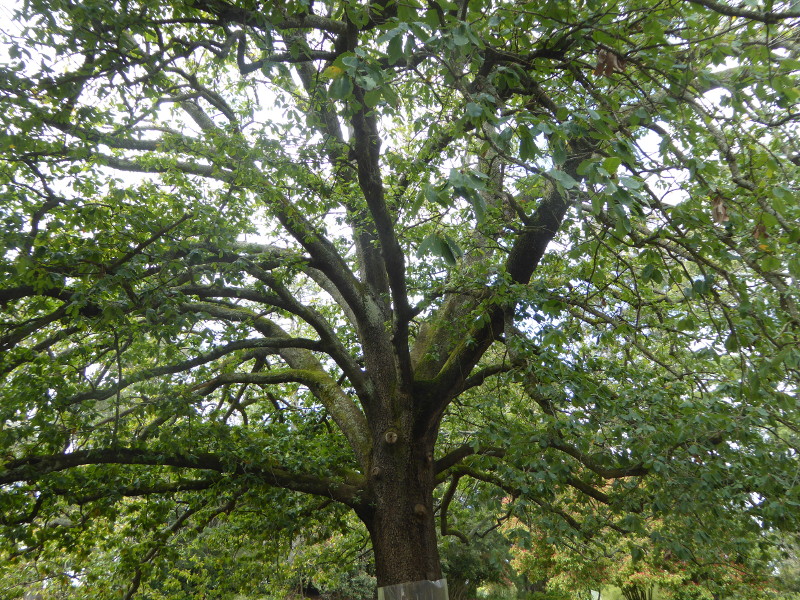 The first thing we noticed in the Kyneton Gardens was the high number of trees that actually carried labels, so we’d excitedly discover the Douglas Fir, the Algerian Oak, or the Californian Redwood. Some of these are enormous, and must go back over 100 years, a few maybe even dating back to when the Gardens first opened in the 1850s/60s. 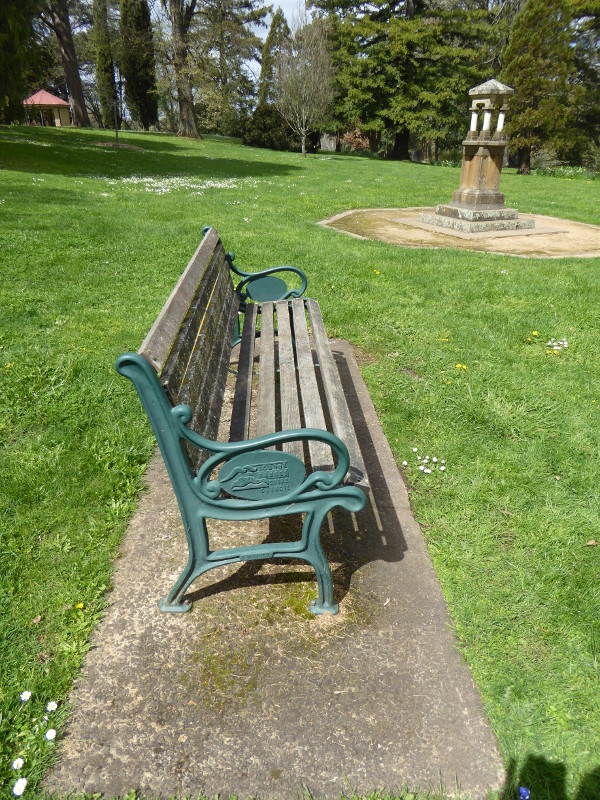 There are benches dotted all around, some in shade, some in sun, making the Gardens a good place to rest in any weather – and if it rains, there’s the small rotunda with a few seats to shelter. 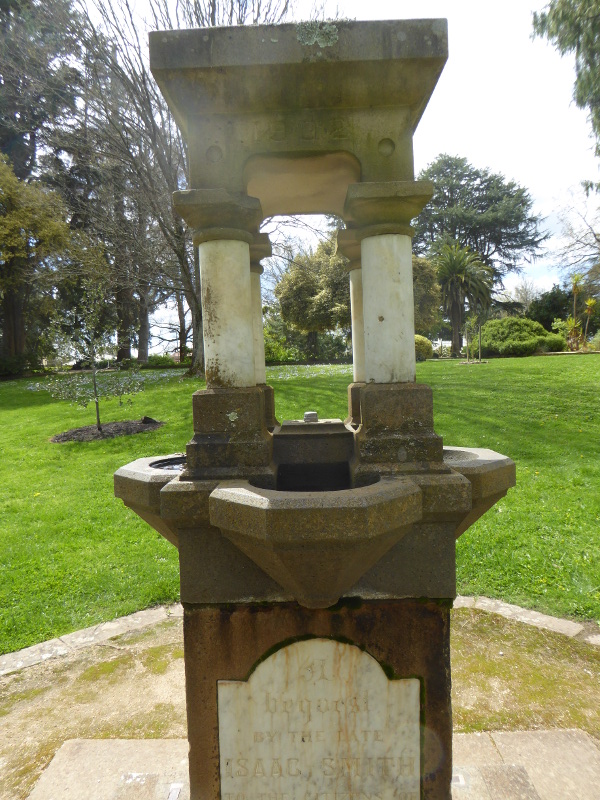 This drinking fountain dates back to 1903, a bequest from one Isaac Smith. 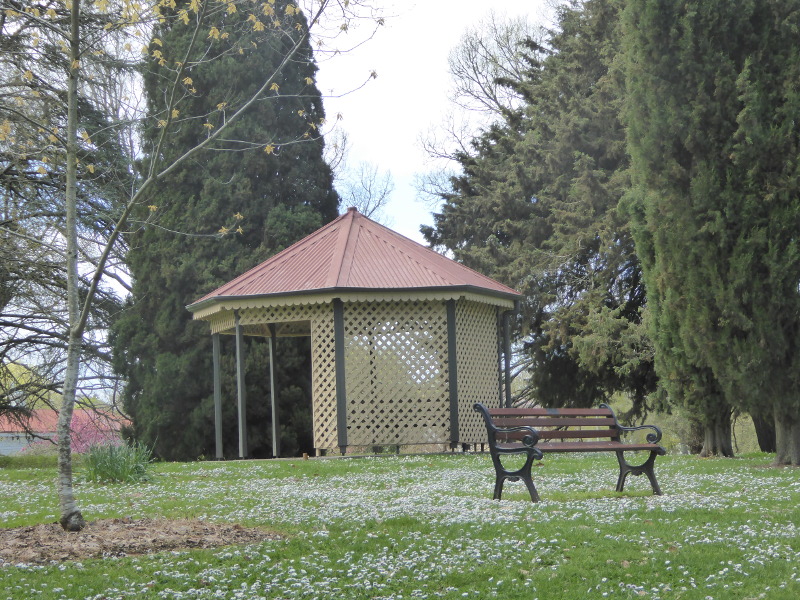 The ‘Rotunda’ we have today is surely not the one that was built in the 19th century. That had room for concert bands, dancing, and other social gatherings. I’m not sure where that used to be in the gardens, but it can’t be the same small structure as stands in 2020. 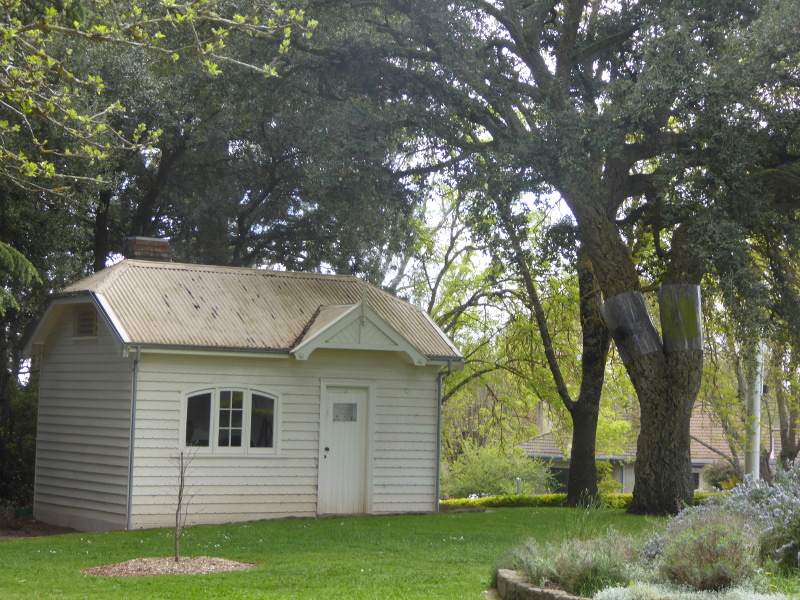 Our favourite part of the Gardens themselves was the gardener’s cottage. A vintage building in its own right, though sadly there was no plaque to indicate when it was built or whether the gardeners actually lived there, or just used it as a base during their working days. 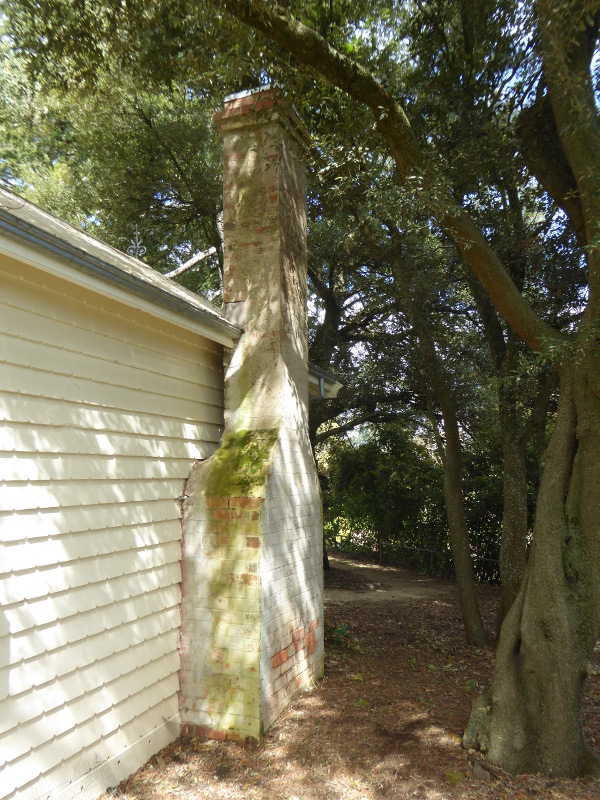 It had an impressive chimney, but we differed in our thoughts on whether it was once actually home to the gardeners in earlier days. As I found on the Trove searches, the first 70 or 80 years of the Kyneton Gardens saw only three curators, two of them serving over 30 years each, so it would have been a long stint in a small house if this was indeed their home. But, as the tributes to them both when they died suggested, the Kyneton Gardens were their lives as much as their jobs. 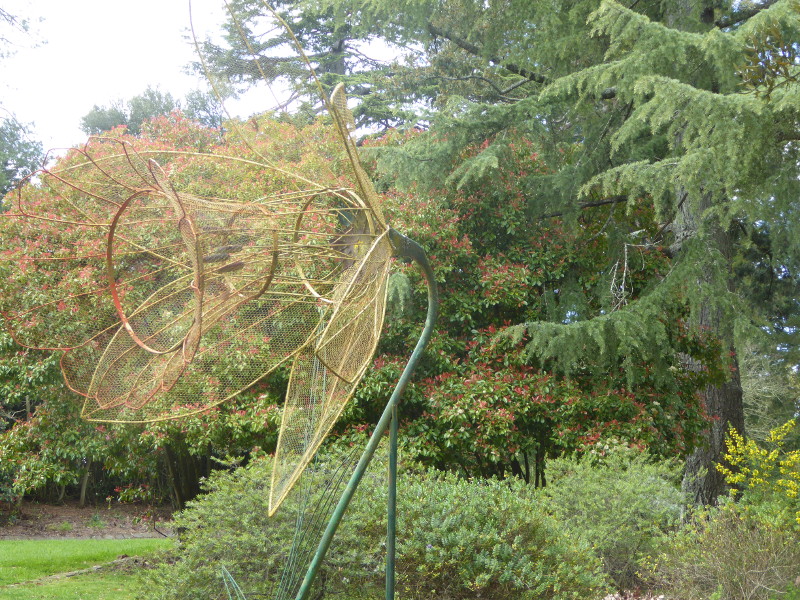 We moved quickly past the kids’ play area, which is now called a Community Park, and apparently no longer part of the Botanical Gardens themselves. 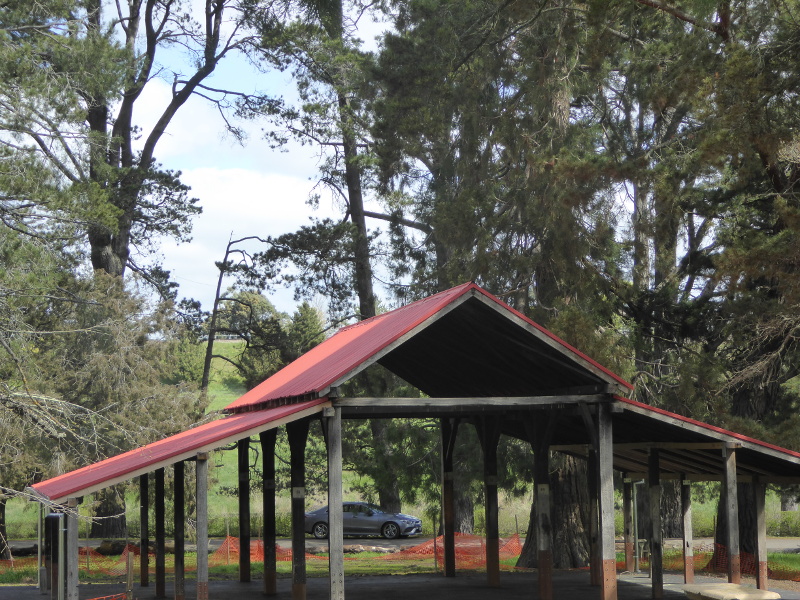 We headed past the old pig pen, which provides nice shelter these days but was apparently moved to the Gardens only in the 1970s, after serving its time in town at the pig market. 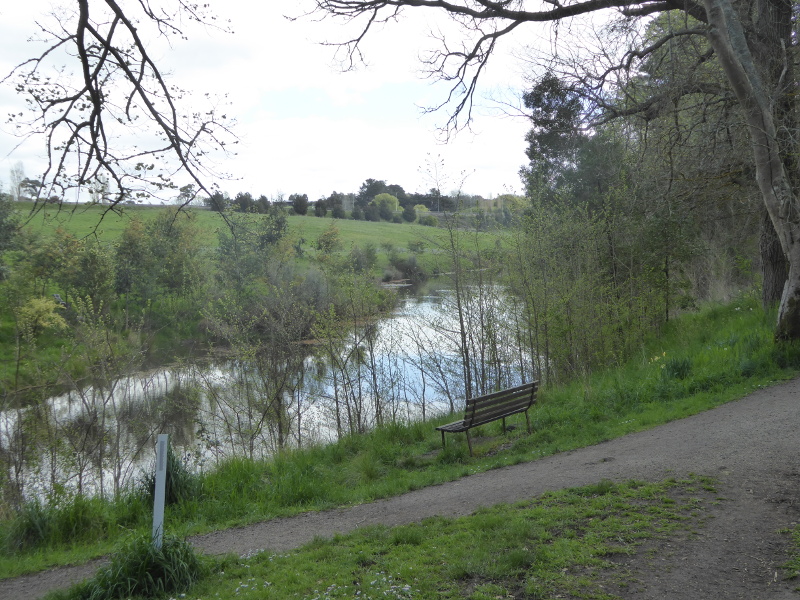 Then we came to the river, and what was actually the best part of our visit. 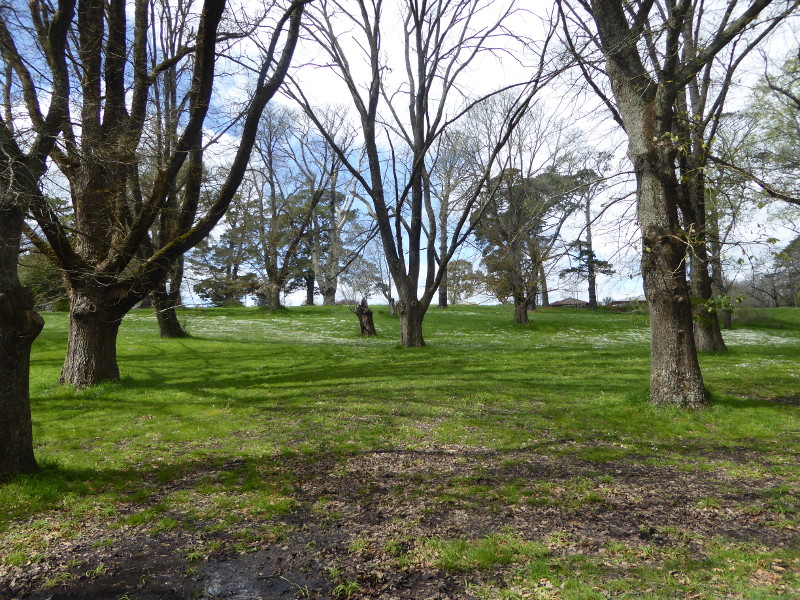 The path along the Campaspe is worth following for quite a way. On the right is a gentle slope, where the grass is covered in daisies in spring, and the area is wooded with old English oaks. I’m not sure this is still officially part of the Botanic Gardens in 2020, but it’s a very pleasant area, and shows just how extensive the Gardens once were. 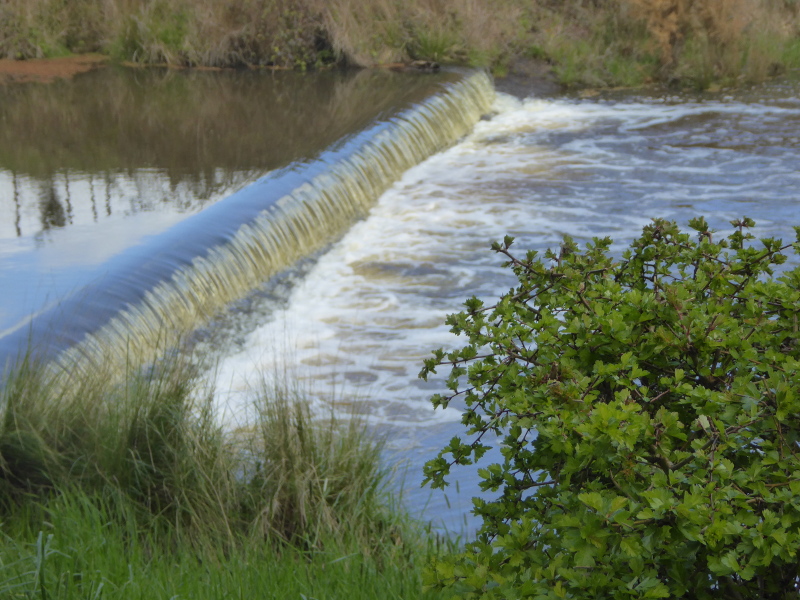 There is a series of weirs in the river, built in the early 1900s, and then… 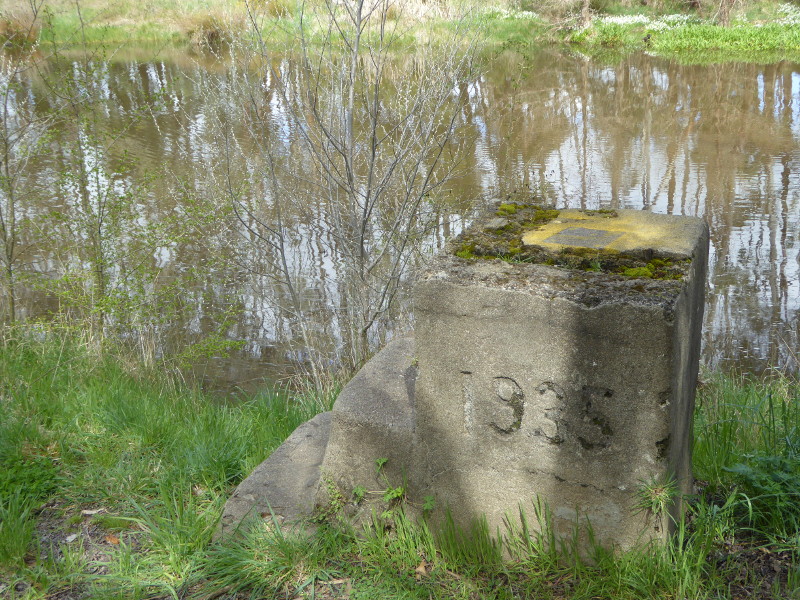 There are the old swimming baths, which must have been a fantastic place to come for a dip on a hot day. It’s hard to know the exact dates of the baths themselves, but I get the impression from the information posts that swimming was made safe and possible by the building of the weirs around 1910, even if the formal stone walls of the baths in the river might date from the 1930s… 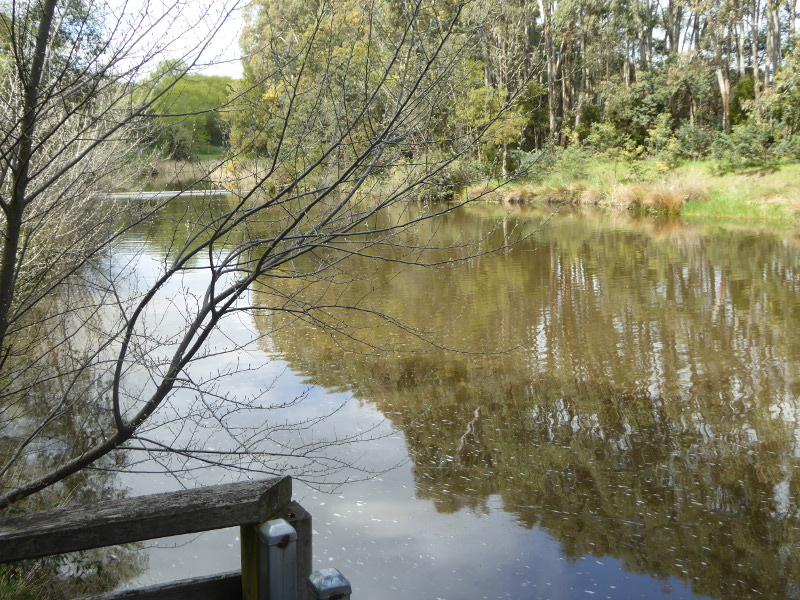 I wonder when the last lap was swum in this beautiful spot, and since Kyneton has also now got rid of its outdoor swimming pool, which used to be just over the road from the Gardens, where does everyone go to swim these days? 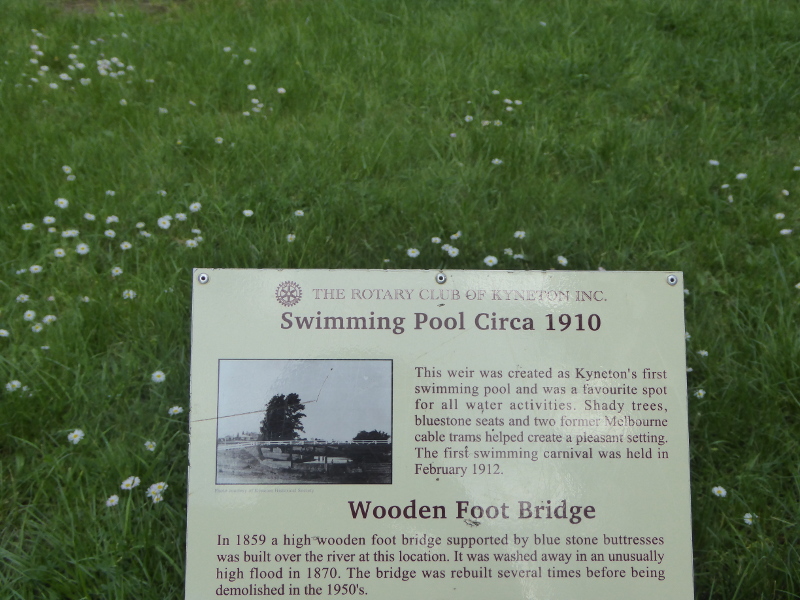 We turned back at this point, while the river continues to wend its way along towards Kyneton racecourse, which must be a lovely path to take one day too. 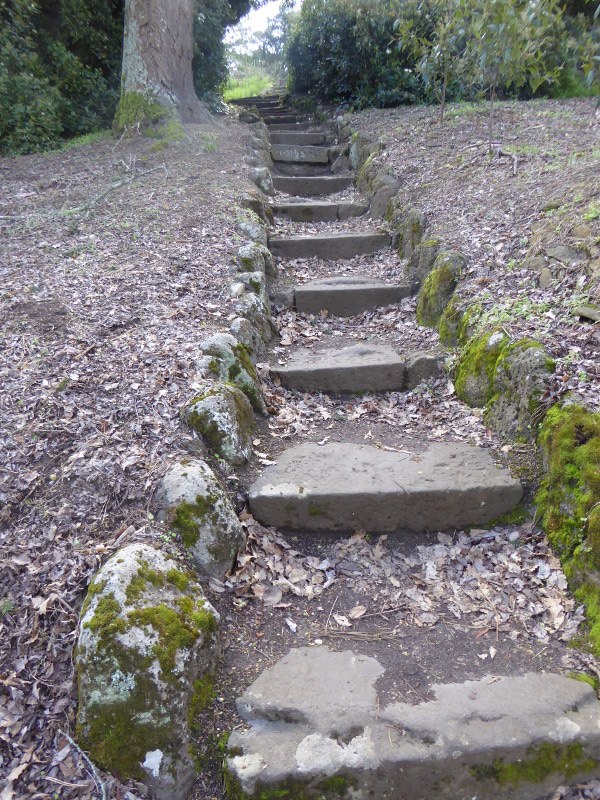 We walked the full length of the path this time, arriving back at those stone steps we had spotted on first entering the gardens. Walking up the steps, it was possible to imagine the thousands of people who must have climbed up here over the 150+ years of these gardens. I’m glad we were still able to come here today.

Look out for the handy leaflets just by the entrance to the Gardens, with information on the history of the Gardens and how to join the Friends of Kyneton Botanic Gardens.

There are toilets in the gardens, though they are no longer called ‘cabinet d’aisance’…

Opened in 1861. By 4 February, the Campaspe River had flooded and carried away with it part of the fencing around the gardens. A baptism of water…

By 1867 the local paper was complaining of local neglect of the gardens. In 1871 the local council proposed building a ‘rustic’ building and installing benches for picnickers in the gardens.

Funding was scarce in those early years, though I noticed that the Kyneton council had funds to ‘erect a cabinet d’aisance’ in the Gardens in 1872. Yes, I had to look up what a cabinet d’aisance was, too. I wonder when that expression ceased to be used (and I never heard it in French, either).

15 years after they opened, the Kyneton Observer complained that they barely warranted the name Botanic Gardens since there was no sign of the ‘continuous display of gay blooming parterres’ to delight the casual visitor. The correspondent also bemoaned the lack of labels on the trees, which is something we noted in 2020 as being a whole lot better than Bendigo Botanic Gardens, for example.

A case came to court in Kyneton later that same year when a Mrs Symons was prosecuted for stealing a pansy from the gardens. The gardener caught her in the act and took the case to court because there had been a series of flowers and plants going missing, and he wanted to put a stop to it! She was fined 20 shillings plus 9 pence damages for the cost of the pansy…

An 1877 report spoke of the lush green of the gardens, and the pleasure in lying on the grassy slopes leading down to the Campaspe River while a strong wind blew the dust up the main road of Kyneton. This was a real country town in those days for sure.

On a Church Sunday School outing to Geelong from Kyneton in 1878, the then curator of the Kyneton Gardens got pally with his counterpart in Geelong, he gave him armfuls of seeds and plants as a gift from Geelong. I wonder how long those survived…

In 1893 two boys were up before the court for stealing dead wood from the gardens. The gardener said he had given them permission to take some wood once because their father had died and their mum was in need, but they had then repeated the offence and it had to stop. Poor kids were fined 2/6.

Picnics became more and more common in the Kyneton Gardens through the 1890s, with the local Council sometimes funding the copper for brewing up tea and even employing a Constable in case of any mishap, so lucrative were such events for the community, when some of them – from the Castlemaine foundry or local churches – involved hundreds of visitors. The Thompson’s Foundry Band leading 1,100 picnickers down from Kyneton Station to the Gardens must have been quite a sight. In January 1900 four trains brought 2000 visitors to picnic in the Gardens from Bendigo.

In 1898 Mr Orames hit 21 years as curator. In 1906 he retired due to ill health, and died just a few months later. He was replaced by a Mr Ed Gray– from Footscray.  Gray also died just a short time after retiring in 1937. In his obituary, it speaks of his devotion to the gardens, even during the Depression, when he was forced to take a pay cut and to work longer hours without help due to the financial crisis. I wonder if he lived in the gardener’s cottage, and how life was in such a small, compact space.

There was a moonlight concert in February 1899, including choirs, bands, a fire brigade stall – all to raise funds for gardens improvements.

In 1900 there were complaints of drunkenness and rowdiness from Foundry picnickers, with suggestions to lock the gardens in the evenings because of it, and disappointment that women as well as men took part, including such scandalous acts as trying to walk along chalk lines in the grass (presumably to prove they could while under the influence).

One day in November 1903, 5000 picnickers filled the gardens with arranged trips from Bendigo Sunday Schools and the Orange Lodges.

In April 1907 a large tree was struck by lightning, sending branches as far as 40 yards away, and drawing crowds to see the damage.

In 1910 a boy named Eccles tumbled down the slope towards the river, giving himself concussion, but his story making the news in brief in Melbourne newspapers.

What are your experiences at Kyneton Botanic Gardens?

Stories on Kyneton Botanic Gardens on the Trove database seemed to stop much earlier than for many of the sites visited for Vintage Victoria. So if anyone has a tale to tell about anything linked to the Gardens after 1910, please get in touch.

I don’t suppose anybody can remember swimming in the Campaspe River at the Baths before they closed? Or can tell us when the baths were shut?

Can anyone fill me in on the history of the rotunda in Kyneton Gardens? I know the original rotunda was built in 1900, but surely today’s structure is different, as there would be no room for dancing and musicians in such a small space?

Or does anyone just have a good memory about a visit to Kyneton Botanic Gardens that they’d like to share here, even from the last few months or years?

Other links and writings on the Kyneton Botanic Gardens

This is the Victoria Heritage Database entry on the Kyneton Botanic Gardens. From this piece I learnt that there is still an Algerian Oak tree, planted in 1863, that grows in the Gardens still today. I couldn’t find it, though…

The Go For Fun travel tips website has an entry for Kyneton Botanic Gardens.

Jackie Kerin’s blog from 2019 has a photo showing a band playing inside the rotunda. Definitely no room for dancing as well, though!

The kids’ play area is the focus of this piece on the To Hot or Not website. It’s actually on the Community Park next to the Botanic Gardens.