Opened in 1893, but many of the vintage features in Kings Arcade, Armadale date from a 1920s refurb. Beautifully maintained into the 21st century

I’m glad my visit to King’s Arcade in Armadale began with arrival by train from Melbourne. Partly this is because the original 1893 arcade was called the Railway Arcade and I assume the covered part of that arcade might have started nearer the train station than the current version does. 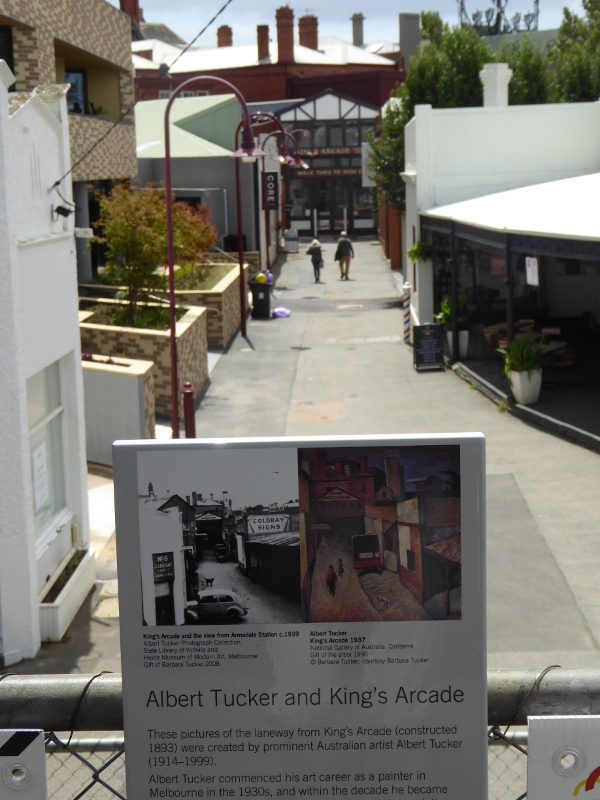 Partly also, though, I was pleased to see this sign on the stairs leading down from the train platforms towards the walkway to the arcade. It is all about artist Albert Tucker, whose work was featured in one of the links I found in researching the arcade before my visit. Tucker painted the arcade during and after the Depression into the 1930s, and I liked the fact that he got his first camera in 1939, and began then photographing as well as painting the place. 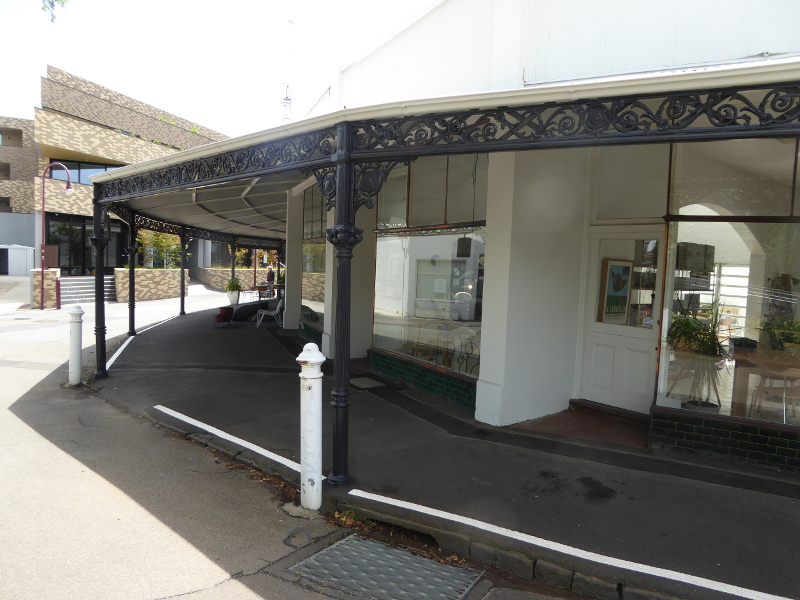 The roadway curves round by the station and heads towards the present-day entrance to Kings Arcade. 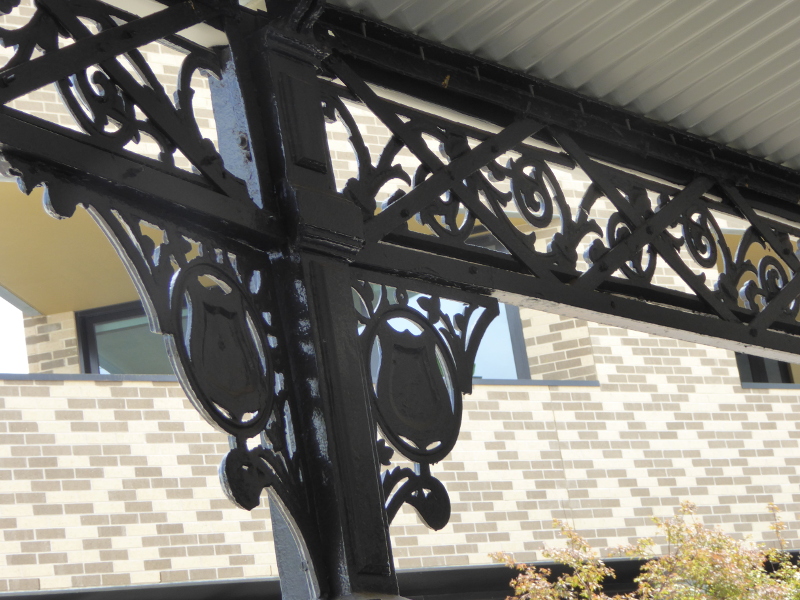 There is an attractive row of shops here, too, with some nice ornate ironwork bordering the awning over the footpath. I even wondered if these shops were once considered part of the original Railway Arcade (though I’m happy for some more knowledgeable local to put me right on that). 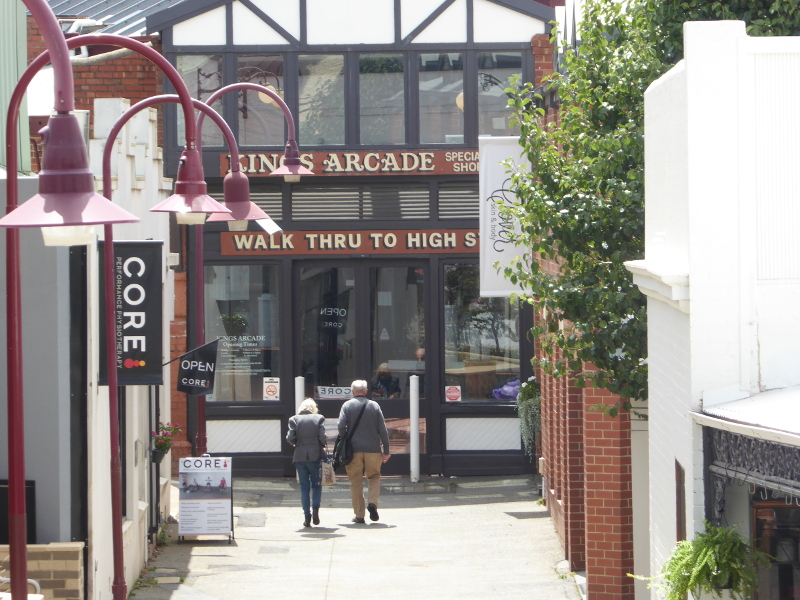 This ‘back’ entrance to the arcade today is fairly modern, and the roofing looks like it’s pretty recent, too.

But stop for a few seconds and it’s easy to pick up the vintage touches to this arcade, which blends the modern and the old well. 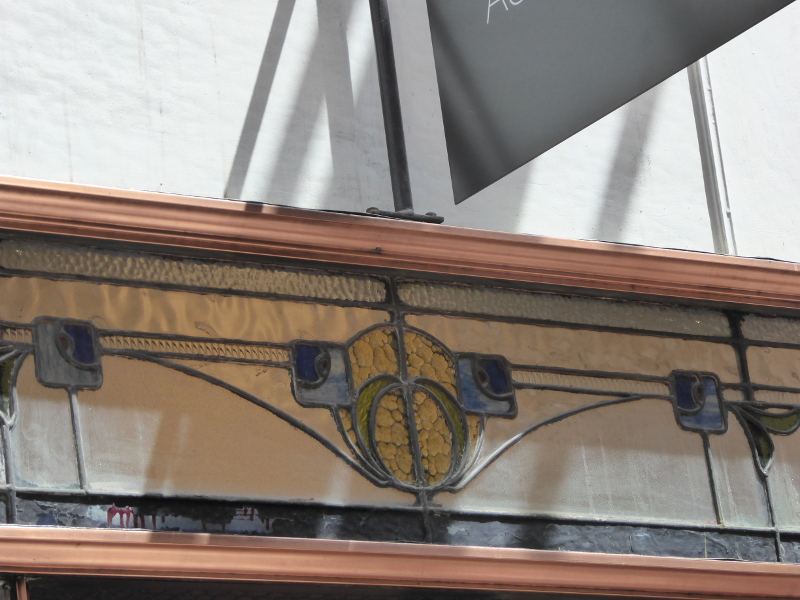 The lead light windows over many of the shops must surely be original, or at least date back to the refurb of the 1920s. 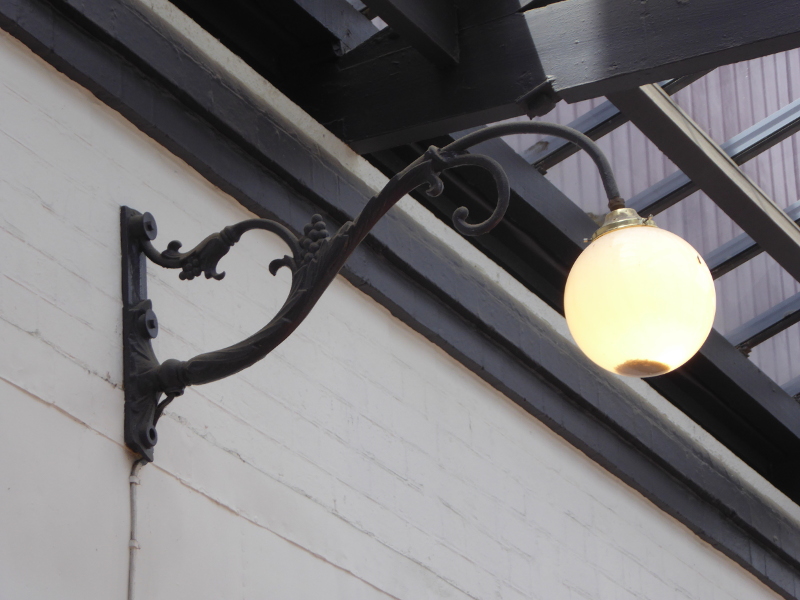 The lamps that line the walls are a similar vintage, I think. 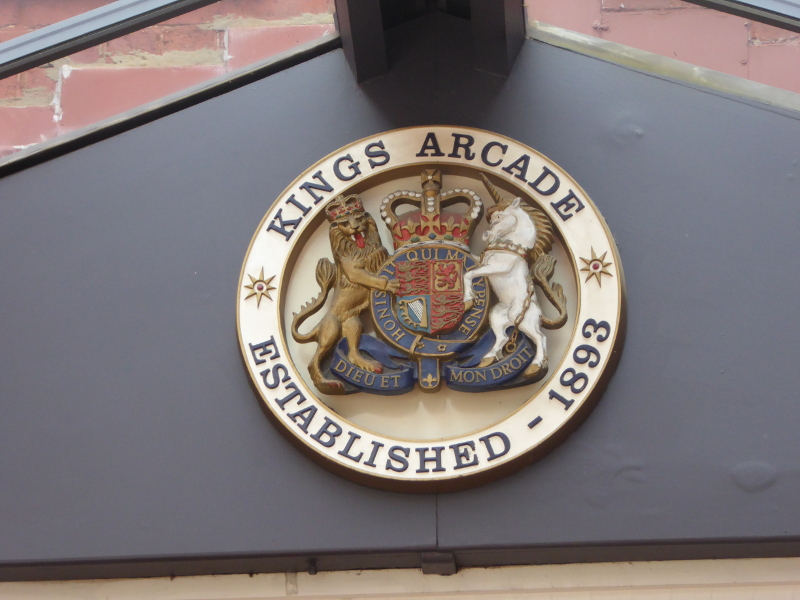 There’s no mistaking the date the arcade was originally opened, 1893.

I’m glad, though, that I read up a bit on some of the stories around the arcade before I came to see for myself. That meant that as I sat and had a coffee at the rather vintage coffee shop on the corner to the High Street, I could picture how, when the arcade was added to in the early 20s, and the connection made through from the station to the High Street, some people might – intentionally or not – have driven their (smaller in those days) vehicles up this paved area to get to the main road. 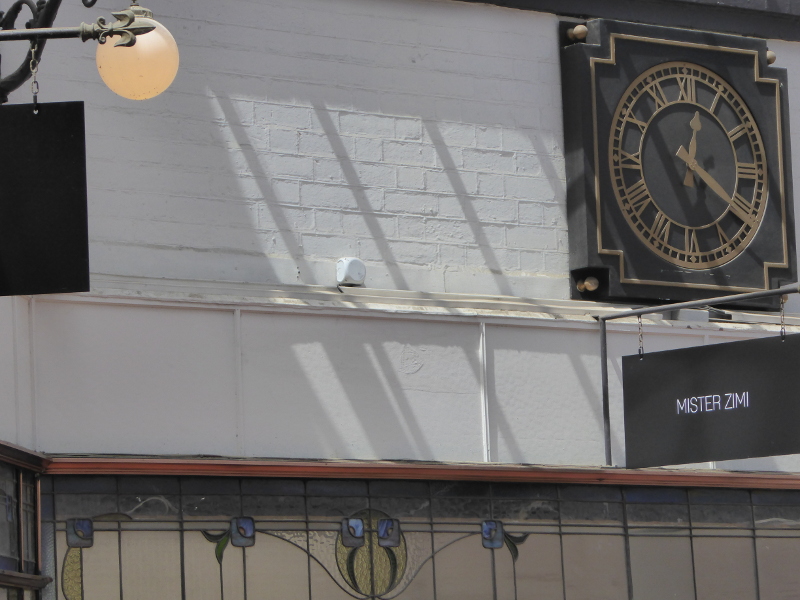 I also liked how the family who own the place now, apart from the name obviously, have a fairly discreet presence in the building still today. You have to look fairly closely at the list of occupants of the upper floor to see the name King listed. I think the current King is third generation, his grand-father having run a very successful fruit store in the arcade in the early days.

I would love to have seen some information up to make that connection. The Kings may have moved on from fruit & veg, but I’d love to know where their original store was, and what it looked like. 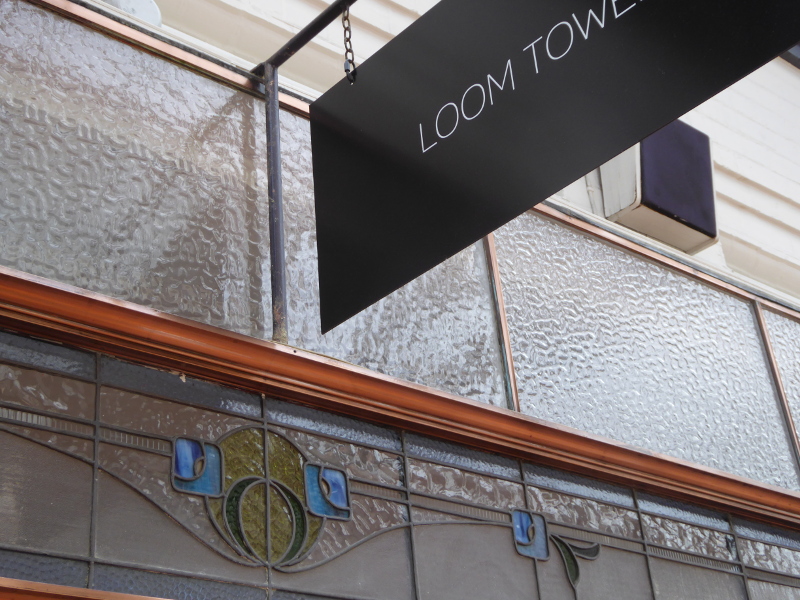 There are a few really high-end looking boutiques in today’s Kings Arcade, Armadale, including my favourite shop of all. Sadly, Loom Towels is closed on a Monday, or I’d have been drawn in to spend whatever it cost for some of the superb items made on hand looms…

But the arcade also has 21st century versions of many of the types of shops that you’d always find in arcades through history: shoe repairers, florists; clothing alterations. 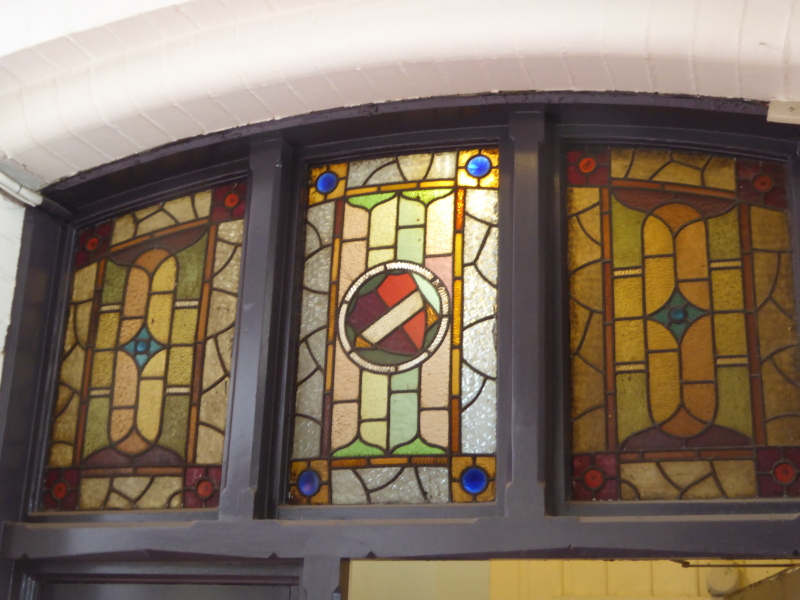 Oh, and don’t miss these beautiful stained-glass windows above the door leading up to the first floor. How long have they been there? 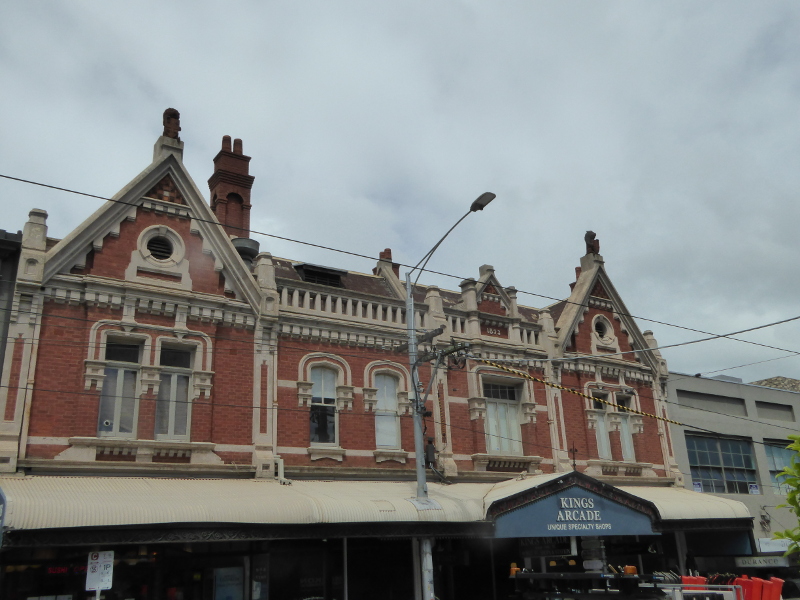 Although I saw it last, having come from the railway station, the arcade frontage onto the High Street is also a pleasant sight. 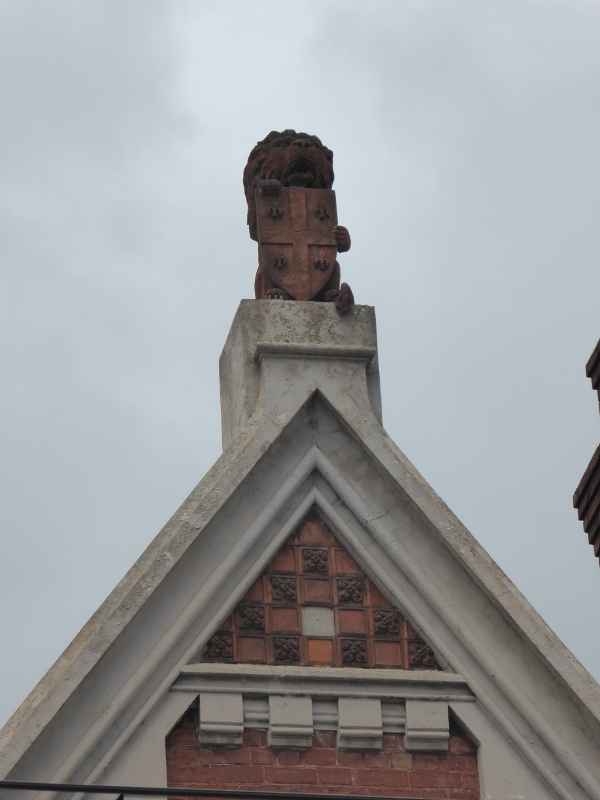 The designs are very much of their era, with the bear carrying his shield, the ochre tiling below that, and the date proudly displayed for all to see. 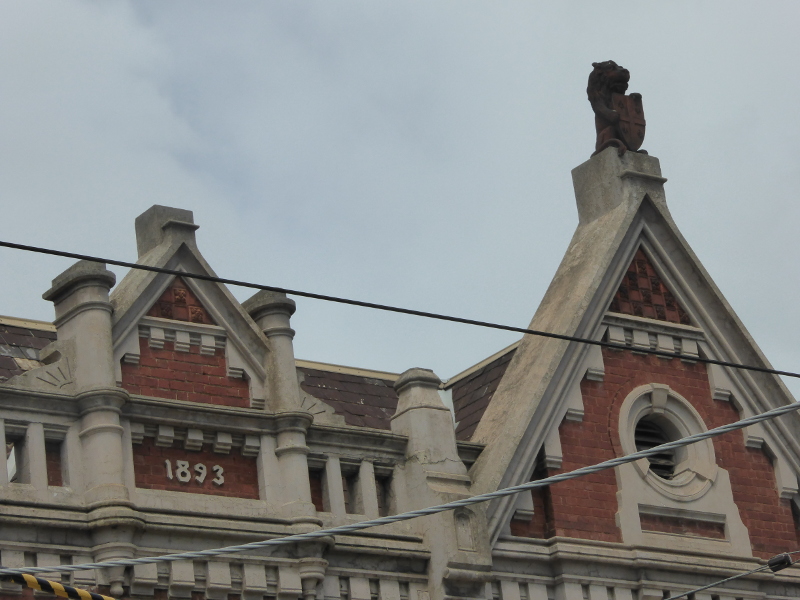 I really liked Armadale Arcade, whether you call it Kings Arcade, Railway Arcade or whatever. And I’m really glad the people behind it persevered when there were so many nay-sayers at the outset. Thanks, too, goes to the King family for keeping it going and keeping it local. It’s exactly the kind of setting my wife and I’s potential business idea might feel at home, but that’s a few years away yet, so keep it going for now, please, Mr King…

Get to the arcade on the tram and arrive at the High Street frontage, or arrive by train and take in the ‘Albert Tucker’ back view before you visit. 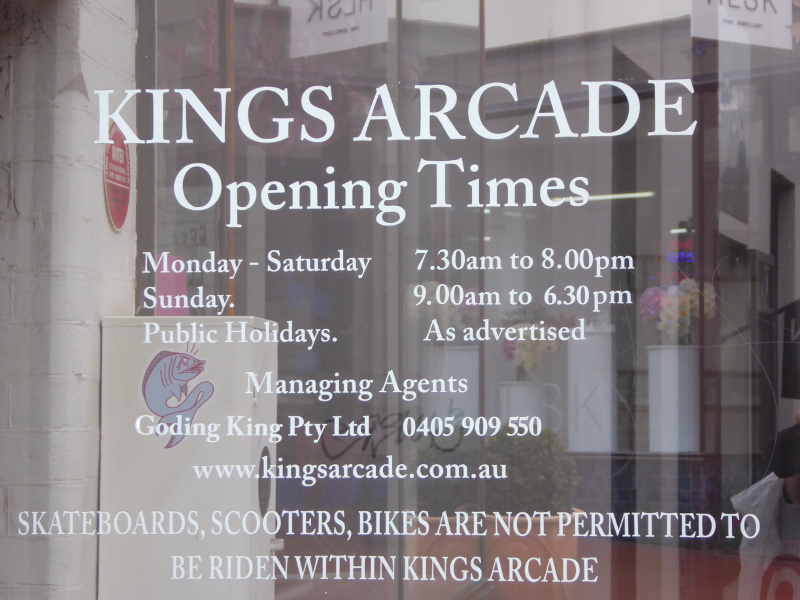 Nearest public toilets in the station or High Street.

Oh, and for the grammatical pedants among us, there isn’t an apostrophe to be seen on any of the signage around Kings Arcade. I added one just because I am a pedant, and I did see one on the Albert Tucker signage outside the station, so somebody shares my love of correct apostrophe usage. But I haven’t used it throughout the blog because I am also a believer in using the names and styles that the owner of a place wishes to, so if the Kings don’t use apostrophes, I don’t have to, either…

There’s no need for Trove, when the arcade website has the best potted history I’ve seen in a while.

It looks as if it has had a number of names over the years: Railway Arcade, Station Arcade, simply Armadale Arcade, as well as the current name linked to the family who have owned it for several generations now: Kings Arcade.

Trove’s stories on the Armadale Arcade didn’t start too well, with the first mentions connected to the insolvency of the arcade builders in 1894.

In March of that year, though, a lady called Mrs Purbrick put a private notice in the local paper to acknowledge the gift from two other ladies living in the arcade of a box of tea, for distribution among the poorer lady members of the Ladies Benevolent Society. I hope they were very grateful!

Most of the clippings referring to the arcade were small ads for staff in houses in or near the arcade: cook, parlor maid, groom, were among the jobs up for grabs in the newspapers in the 1890s and 1900s.

Tenders for upgrade and additions to the arcade were published in 1922. And I believe this was when the arcade was linked by a kind of roadway through to the high street from the station.

The Prahran Telegraph headline of 15 February 1924 was rather more dramatic than the incident it then reported: Armadale Arcade Invaded, it read. But it sounded as if the guy who was arrested and fined subsequently, just got lost delivering some parcels in the arcade and didn’t know he couldn’t drive through onto the High Street…

When Armadale Cycle Club set up its home in the Armadale Arcade in 1927, I was intrigued to see that the Swastika Motor and Cycle Works company of Waverley Road was an early sponsor. Syd Jenkins ran the joint in 1927. I wonder how long it took after 1933 before he changed his company name?

In 1929 a rather extraordinary – at least from a 21st century perspective – court case made the news concerning a young lady who lived in the Armadale Arcade. She took a guy from Bendigo to court claiming 2000 pounds in damages for ‘breach of promise’ to marry her. I guess in those days, ‘engagement’ meant more than a plan to get married, at least legally. I never found out if she won her claim, mind.

There were the usual robberies in the arcade, especially as the Depression hit. In 1930 a jeweller’s had watches stolen to the value of 40 quid. A few years earlier, robbers broke a hole in the brick wall of the draper’s and stole more than 50 pounds worth of ‘artificial silk’ hosiery and socks…

A couple of arcade business owners had fines imposed in 1933 for having no wireless licence for their premises. I wonder when the radio became a free commodity to listen to…

I liked the 1935 Herald brief on the arcade which said that when the arcade was first built it was considered to be a white elephant. But the suburb grew rapidly and the advent of the electric tram confounded the critics. The same article referred to a boot shop in the arcade, which had been going for 42 years (since 1893 when the arcade opened), without a day’s rent being missed and with only four owners in all those years. I wonder how long the boot shop survived and what was its name?

I loved the range of shops in the arcade over the years. Many would still be found in some arcades today: florists, hair salons, clothing alterations (The Shirt Hospital in 1937 appealed to me, somehow), but also a whole series of spiritualists, when clairvoyancy was all the rage.

And finally, another headline which might be misinterpreted these days: Children May Have Taken Acid, said The Argus in 1948. A window cleaner had apparently left a beer bottle full of salicylic acid (used for wart removal these days) on a step while he cleaned. It was missing when he next looked, and two children were nearby, but there were no further reports of kids choking on acid so hopefully nothing came of that one!

Other links and writings on Kings Arcade

The arcade’s own website is well worth a look through.

This Victorian Places article is more about the suburb of Armadale, but it does mention the arcade and it gives a nice historical context.

The Lady Melbourne blog is all about fashion and shopping, so the actual boutiques might have changed somewhat since her visit in 2007.

Poppet’s Window is another blogger who visited the shops and cafes in and around Kings Arcade in 2015.

Daniel Dendy’s 2014 blog post is interesting for the Albert Tucker paintings from 1937 and the more recent photos to compare how things look now and then.

What are your stories and memories of the Kings Arcade?

Was there a shop you used to love which is no longer there? What’s the shop you most like to visit these days?

Can anyone remember a time when The Shirt Hospital was there, or the Armadale Cycle Club, or even any of the spiritualists based in the arcade?

Do you have any other stories linked to the arcade to help fill in the gaps, since the Trove database doesn’t tell us much after the mid 1950s?

Coffee near the arcade?