Thank goodness they uncovered the beautiful 1913 facade of the old Geelong Theatre – now Village Cinemas. Lovely retro tiling on the foyer floor, too.

We’d driven past Geelong’s vintage cinema a few times on our way to other Vintage Victoria venues before we finally made it our destination in its own right on New Year’s Day in 2020. 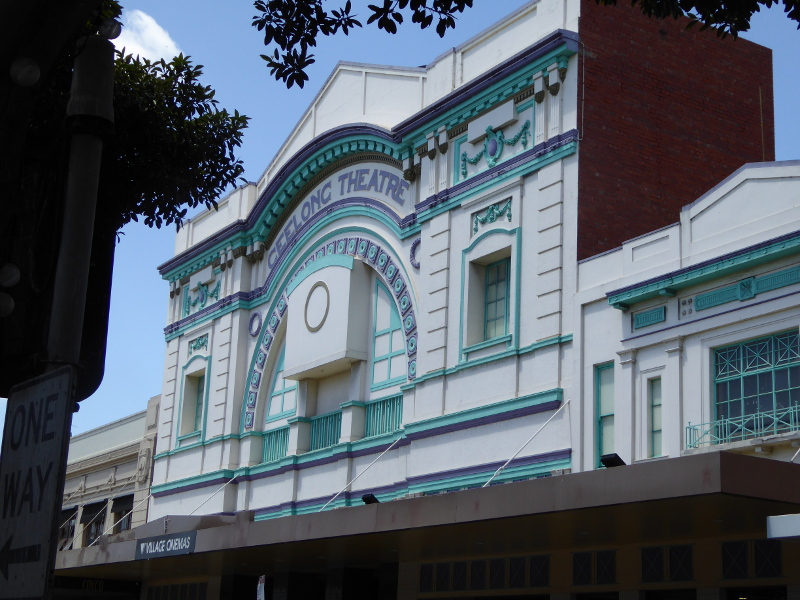 When it first opened its doors in 1913, it was called simply the Geelong Theatre, and that façade, with its original name, still stands on Geelong’s busy Ryrie Street over a hundred years later. 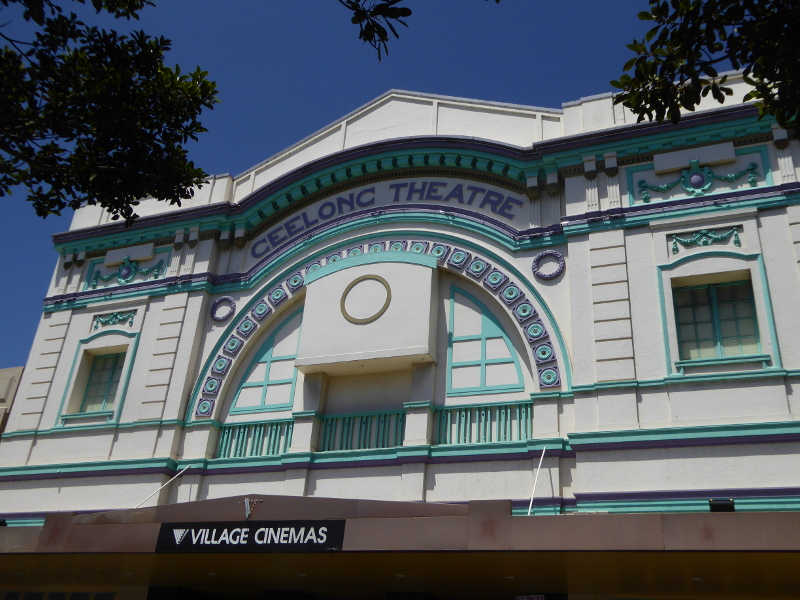 I was fascinated to read on the rather informative Geelong tourism website that this façade was largely hidden behind plain 1970s plaster for a few decades before it was uncovered not so long ago and restored to its original splendour. This reminded me of the extraordinary Tiled Hall in Leeds, in my native Yorkshire, which was similarly covered in white in the 1950s and only exposed in its extraordinary beauty a few years ago.

In that Yorkshire story, the 1950s purists apparently thought the elaborate tiling would take people’s minds off their books, as this was the main library in town at the time. But why did people think it important to cover art deco frontages of cinemas in the 1970s? I’d love to get inside the heads of those policy-makers, though I’m rather glad that their theories have been abandoned in the current era which thankfully values art deco facades and shows them off, rather than hiding them away. 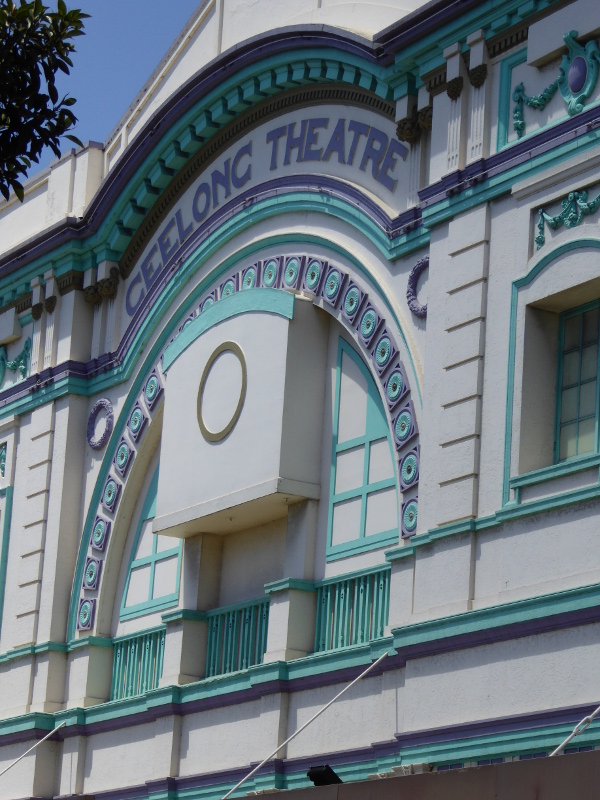 The frontage of the Village Cinemas, Geelong (as it is now called) is really the main draw for Vintage Victoria. 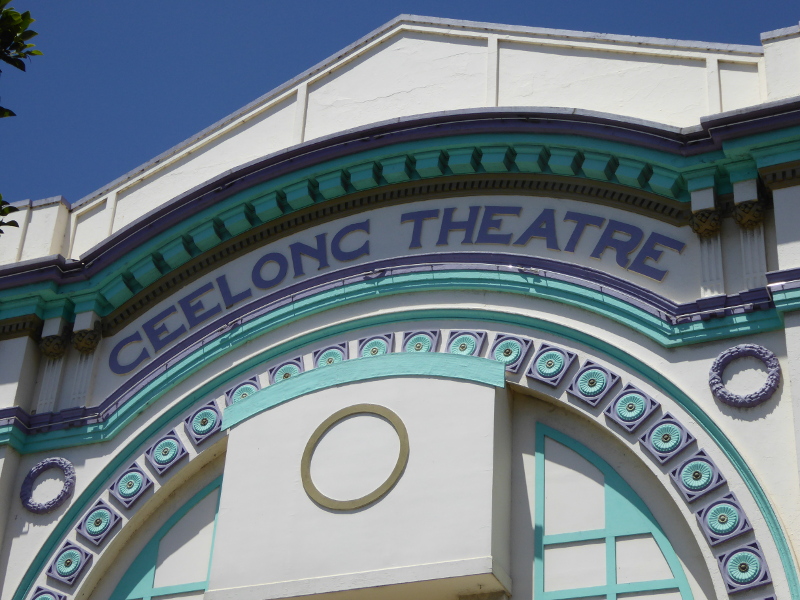 The lettering and windows, the curve of the arch and the star motif on the doors are what makes this place special in 2020. 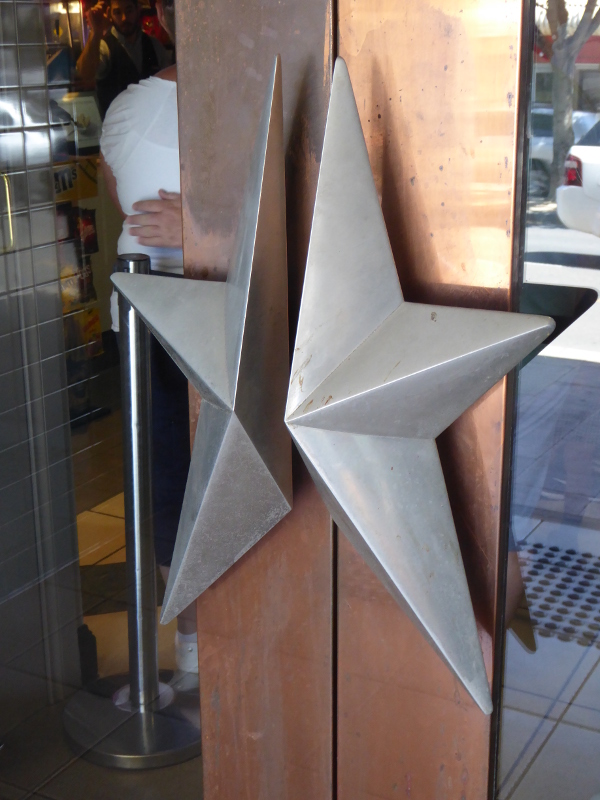 As you enter the main foyer, there is still some striking tiling on the floor, and the toilets have a vintage feel to them as well. 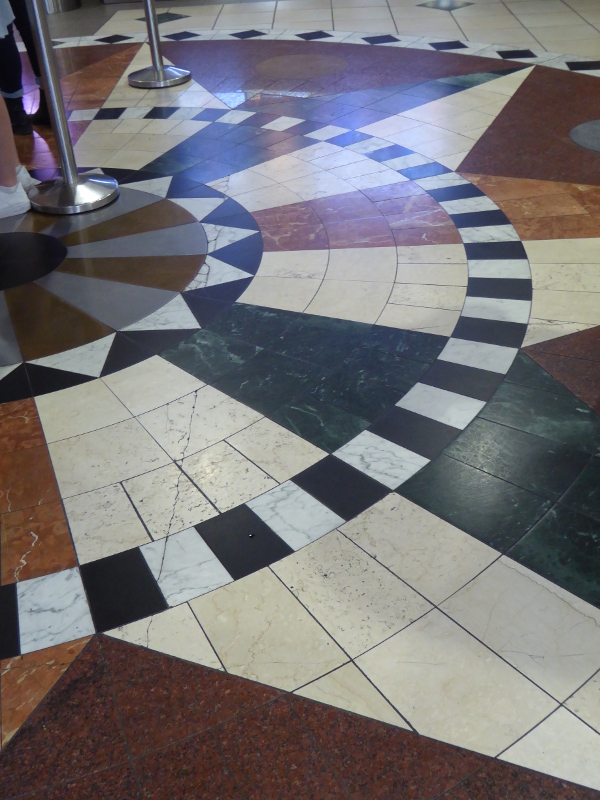 But inside the auditorium – at least in the rather large screen room we entered to watch Little Women – there are no real signs of the vintage cinema anymore. 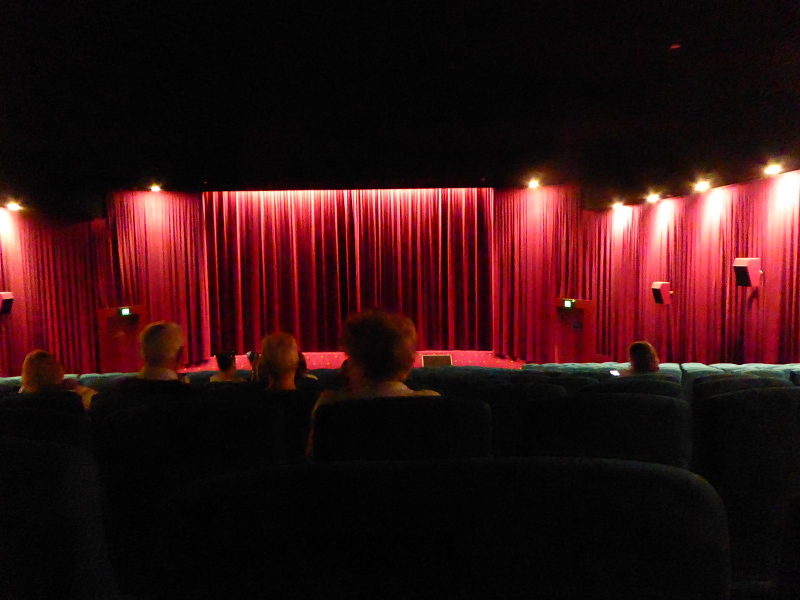 Some cinemas manage to go multi-screen while maintaining features such as lighting, stages or curtains, but the Geelong Theatre has gone almost as far as the Paramount in Maryborough in gutting the interior to make way for the 21st century (please correct me if I’m wrong, and one of the other screens here has all the gems of the pre- World War One architecture…). 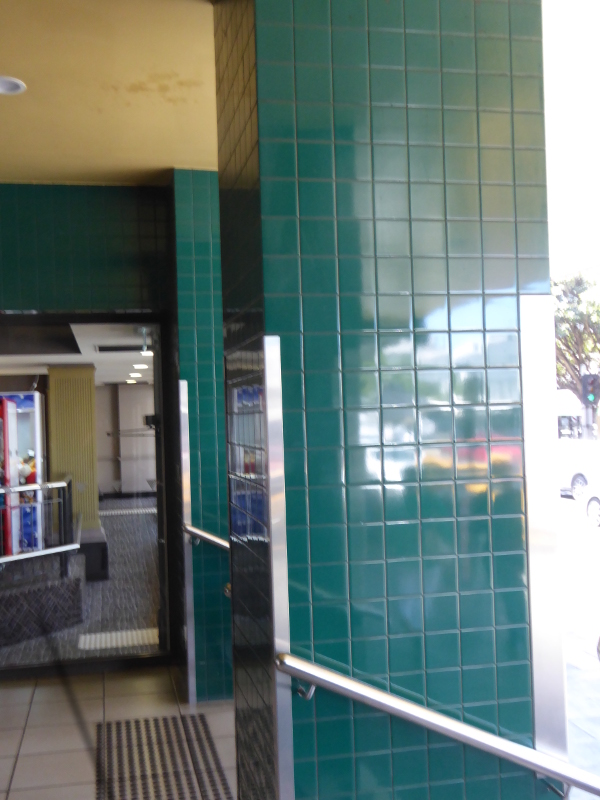 But the colours of the tiling, both on that floor in the foyer and on the outside wall (that dark green) are definitely vintage, so I have no hesitation in adding the Geelong Village Cinemas Theatre to the site.

We paid less than $15 a ticket on this public holiday screening.

Vintage toilets in the cinema.

There is a cafe within the cinema so you can pick up a coffee or snack before you go in for the film.

History and stories about the Geelong Theatre

When the announcement was made in 1911 that a new theatre for Geelong would be built, part of the plans included space for three shops on the ground floor within the cinema building: an oyster saloon (!), a tobacconist and hairdresser (surely barber rather than ladies’ salon, with that combination?); and a fruit and confectionery shop (interesting concept combining greengrocers with sweeties…) – I’m not sure these ever came into being; in fact there was no mention of shops once the cinema opened in 1913.

The opening night, in May 1913, was actually devoted to a concert by a British contralto, Clara Butt, who happened to be touring Australia at the time. The first films were shown the following night and featured an Italian production called ‘Tigris’, a bit of a detective thriller based on a jewellery theft. And on the first weekend of the theatre, a Japanese sword-fighting troupe performed on the stage at the theatre, so it was a multi-cultural centre in its early days. 1,700 people attended the opening night, though most sources reckon the capacity was nearer 1400.

Most Trove findings for the first year of the Theatre were either previews of films or reviews of stage performances. One brief item gave a hint of some indelicate problems that occurred in pre-World War One Geelong, though. Raw sewage was causing a stink as drains outside the theatre weren’t coping in March 1914, causing what the papers called a ‘nuisance’ to theatre-goers. A smelly night out, basically, so it wasn’t all glamour and divas, I guess.

It was hard to find any major stories of incidents happening in or around the Geelong Theatre, so I had to turn to the correspondence pages of the local newspaper to get some flavour of daily life at this cinema. In 1929 an irate letter-writer calling himself ‘Disgusted’ complained of the poor service for regular patrons at the cinema. He had booked tickets for the dress circle only to find a crowd clustered around the booking office in the foyer and the helpless booking clerk admitting that his tickets had gone. The crowd didn’t even form a queue, said ‘Disgusted’…

I was also intrigued by the letter in the Geelong Advertiser in 1927 from a Peter Singleton, whose daughter had won most votes in the ‘Most Popular Girl in Geelong’ competition at the theatre, but who had not been awarded the prize. A trifling event in the annals of history, but I couldn’t help wondering: what made someone ‘most popular girl’ and what on earth the judges had in mind in not awarding the prize; was she a bit of a scallywag? Or did the judges have a preferred candidate? Tones of the ice-skating film I, Tonya, maybe?

A brief snippet in The Herald of 27 August 1929 revealed that the (dreadfully-named) Australian Natives Association (which, by the way, was exclusively for white men) held protests across Geelong’s theatres against the installation of foreign-made machines that would allow for Talkie films to be screened. I don’t even fancy starting to try to get inside the heads of the Australian Natives Association, quite honestly.

There were a few stories of cars stolen from outside the cinema, of film reel stolen at one point, or the film screen being slashed by an intruder, and a bizarre story of random violence against the theatre manager as he walked home at night in 1931, but on the whole the Geelong Theatre seemed to have a fairly blessed life, making it able to focus on the entertainment it was built for.

One man and his false teeth made the news in 1935 when he had laughed so much during a comedy film that he took his dentures out and put them down, forgetting them when he left for home. An announcement was made but too late, and he had to come back the following evening to retrieve them.

George Formby attended the Geelong Theatre in 1948 to perform in a fund-raiser for starving families in the north of the UK. I had never heard previously that apparently Formby and his wife were the last two civilians to leave Dunkirk before the Germans arrived in 1940!

There was an incident in 1950 when fumes from a central heating unit led one member of the cinema audience to shout out: ‘the place is on fire’, but an alert usher called for calm and told everyone to stay in their seats as there was no fire. I guess that usher might still be with us – love to hear from him/her if so?

A 1951 article in The Argus spoke fondly of an Australian comedy “On our Selection” from 20 years earlier, which was still packing the theatre on a regular basis. The article claimed that this was the only film in the history of movies that had never stopped being screened somewhere since its first screening in 1931. I wonder when people stopped going to it, or cinema managers stopped ordering it? Or did the prints fall apart (with no negatives to replace them, according to The Argus?).

Other links and writings on the Geelong Theatre

The Cinemas Project entry on the Geelong Theatre doesn’t add much to the cinema’s story (yet), but there are a couple of nice comments giving more insight into daily life at the theatre in the 50s and 60s.

This is the Cinema Treasures entry on the Geelong Theatre.

What are your memories of The Geelong Theatre?

Is the reassuring usher(ette?) from 1950 still with us to remember the tale of the false alarm for fire in the Geelong Theatre?

Can anyone tell me what happened to the 1931 film “On Our Selection”? Why and when did it stop being screened?

Does anyone know when and why they covered the facade of the Geelong Theatre? It can’t be the same thinking as Leeds Tiled Hall, so what was the idea?

What’s the best film you’ve seen at the Geelong Theatre or was it a musical or cultural event you attended that sticks with you as a great memory?

Public holidays aren’t always the best times to find the best coffee (or tea) in any town, though it’s a shame we missed A Spot for Joe, as that looks to us like it might be the best speciality coffee shop near the cinema in Geelong. Or what’s your favourite spot?