From daring rescues to sinister sharks, and a severe case of amnesia, Frankston Pier has seen it all in its 165 years on the Mornington Peninsula

I have to confess I didn’t spend very long at Frankston Pier. I’m not sure I’ll have time for another trip down the Mornington Peninsula before this stage of the Vintage Victoria project comes to an end and we relocate overseas. So, I stopped off for a quick walk along the pier on the way home from Portsea. 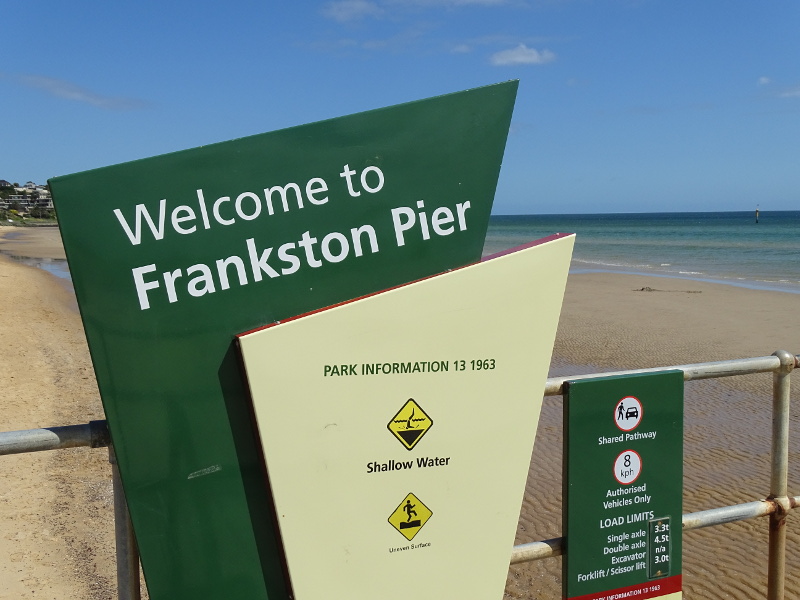 I parked up near the Pier Bandroom, though it’s still a couple of hundred metres walk along the Kananook Creek and over two bridges before you get to the pier itself. 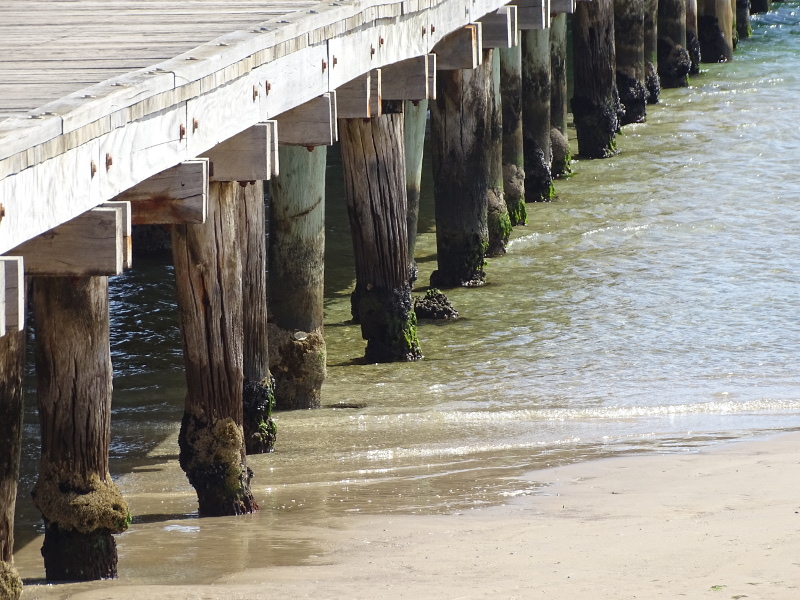 Frankston Pier sits quite low over the sandy beach here, some of the old piles looking quite worn by the elements, but sturdy still on this breezy afternoon in March. 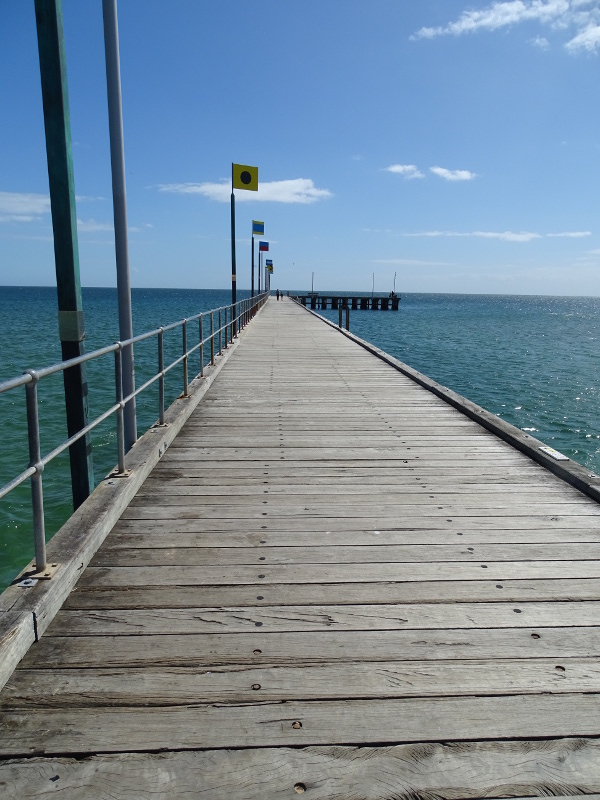 It’s a good 300m straight boardwalk timber pier, with a small 50m or so cross-section at the far end. 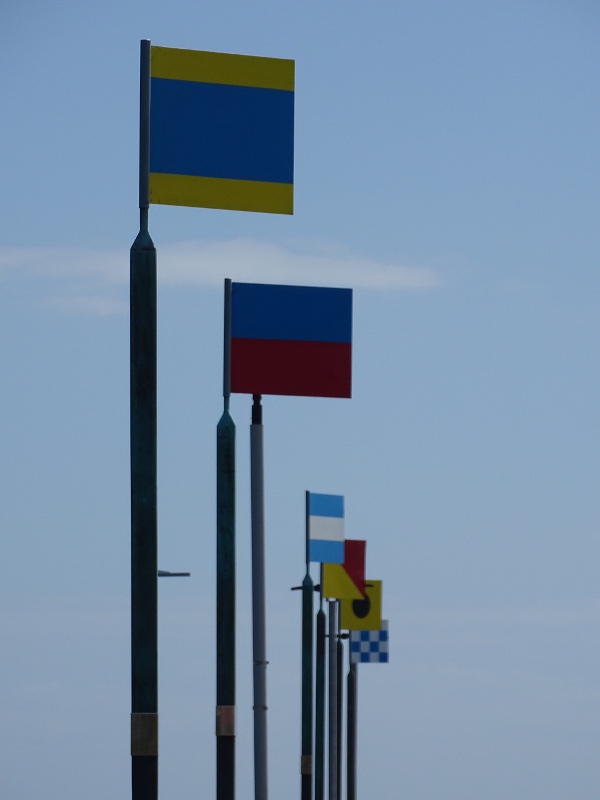 All along the 300m on the left side as you walk out to sea is a line of what appears to be flags. I’m not sure they represent any set of countries, mind (and if anyone knows what they DO represent, do get in touch – see one of the comments below, with a link explaining the flags…), but I focused on the nearest thing to a Ukrainian flag, given the tragedy of what is happening over there at the moment. 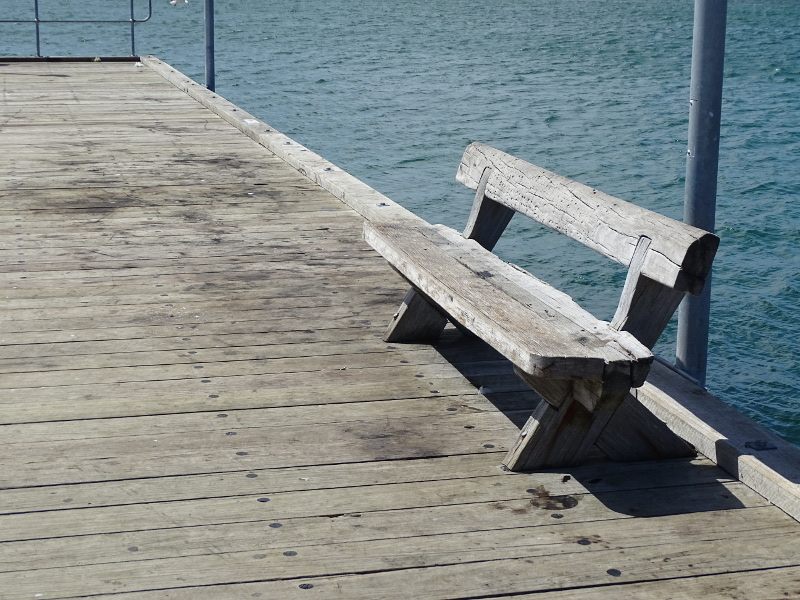 Other than that, Frankston Pier is a fairly simple structure, its two benches sitting on the 50m cross-section at the end. This one is a traditional timber bench facing out to the bay. 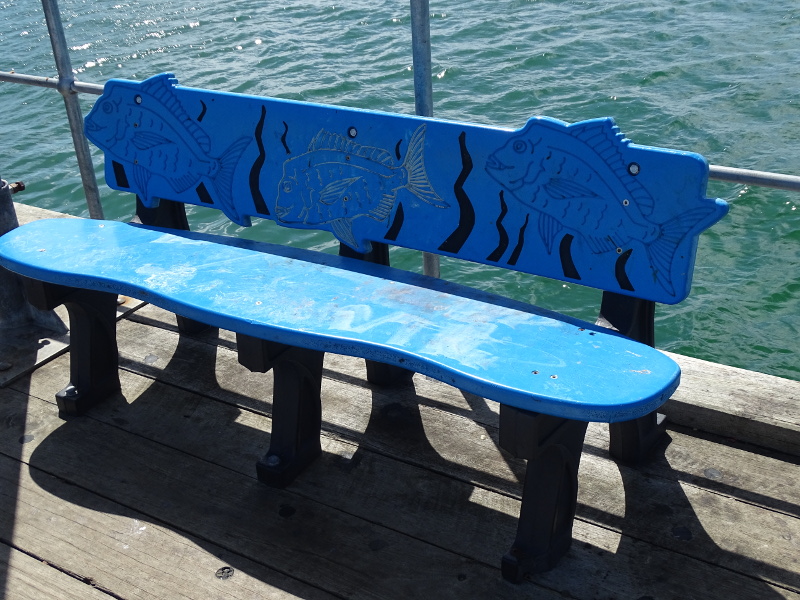 Right at the end of the 50m section, and facing back along the planks, is this more arty blue bench. Again, if anybody knows the story of this bench, do let us know in the comments below. 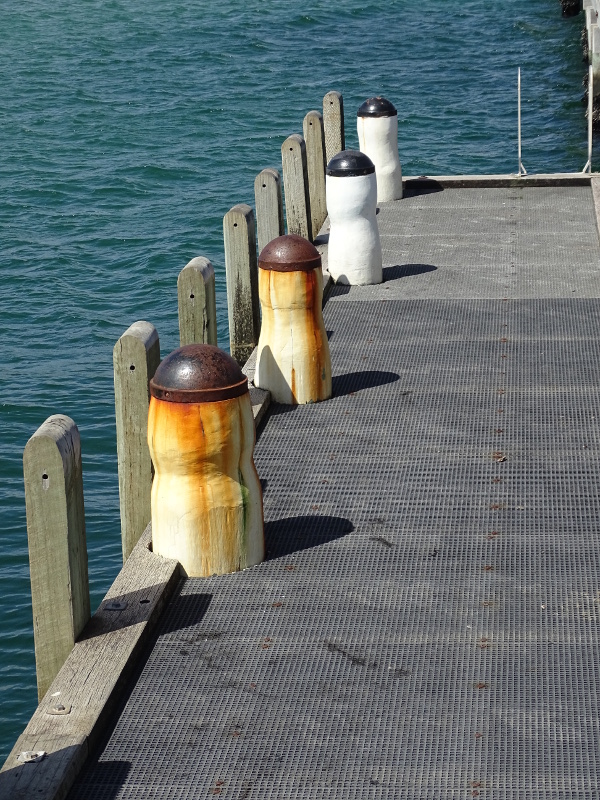 There’s a little boarding and mooring section slightly below the pier itself, with the usual nice line in mooring irons, some white, some rusting. 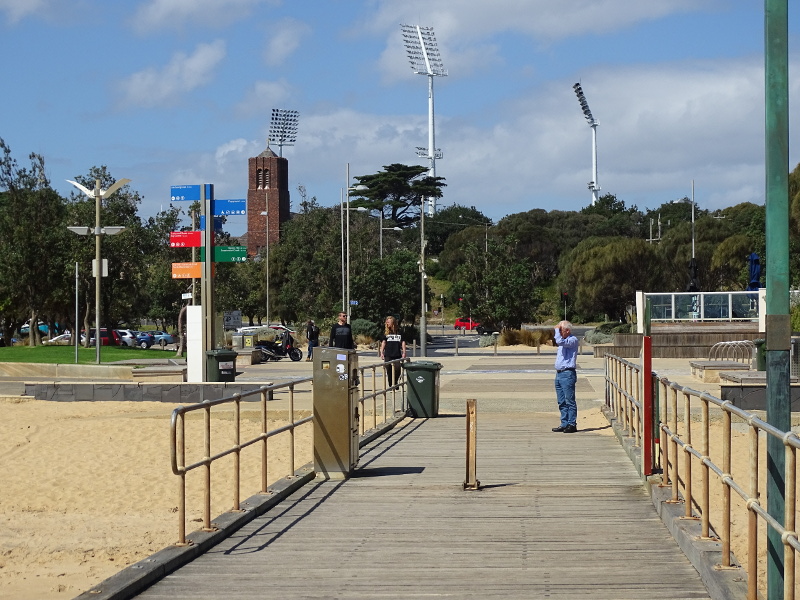 Then looking back to land, you can see how close the Frankston Oval is to the pier. 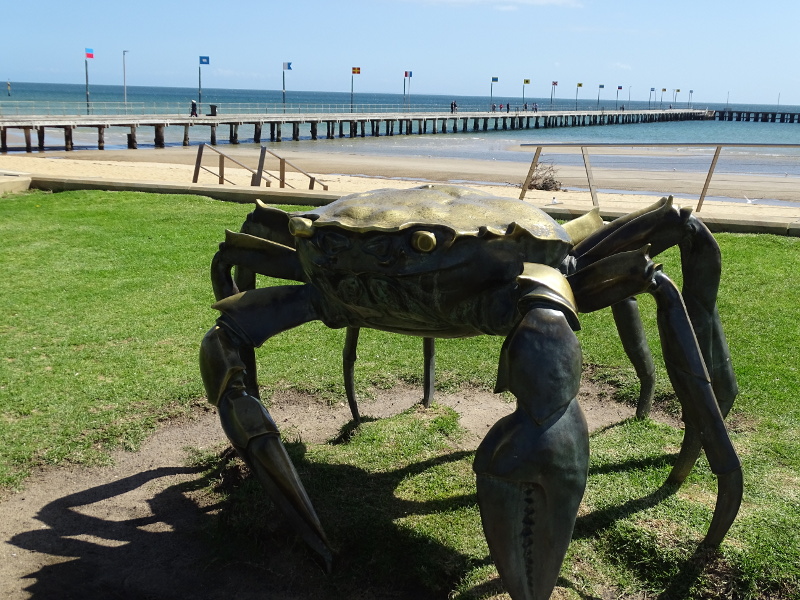 It was another structure on the land end of the pier that most caught my eye, though. This rather impressive crab sculpture has a small plaque explaining that it was made by Gillie and Marc from NSW. With the pier in the background, it actually gave me my favourite picture of Frankston Pier, and finishes off this 32nd entry under piers of Victoria. 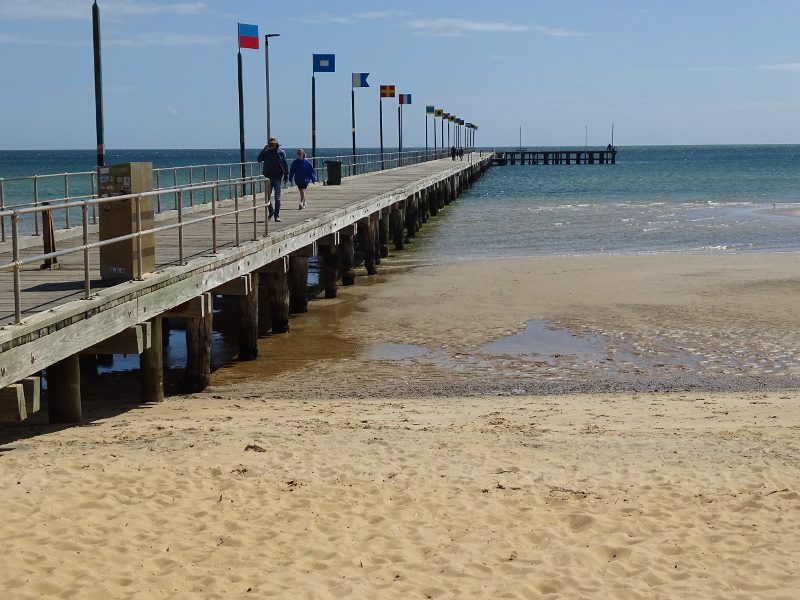 There are still a few I haven’t visited, including Tankerton on French Island, and Cowes on Phillip Island, so I may end up visiting those on a future trip to Victoria some time in the years ahead.

Two benches but no shelter along the pier at Frankston. Parking near the pier, and also where I parked on the extension of Davey St.

Nearest toilets are on the public reserve just near the crab sculpture.

History and stories about Frankston Pier

The first mention of Frankston Pier in the Trove database dates from 1876, when an excursion steamer arrived here from Melbourne. A Frankston Jetty gets a mention 12 years earlier, though, when funds were released to extend it, and work on the first jetty at Frankston began as early as 1857.

By 1931, reports in one newspaper said: “Frankston is particularly fortunate in having a long promenade pier that is a constant source of pleasure to visitors of all ages.” (Malvern Standard, 8 January 1931)

There was a gruesome find by two brothers fishing off the pier in 1884. They managed to land a 14 foot shark, but when they cut it open, human bones were found inside the shark’s stomach, along with a gold watch and chain, later identified by a Mr Brown as being that of his brother who had been missing since his yacht capsized near the pier two weeks earlier.

In rough weather the waters would become so choppy that steamers were unable to moor at the pier, but on calm days in summer, people could be entertained by a brass band playing on the pier itself.

People taking an evening stroll along the pier one Sunday in February 1900 could see a glow on the horizon across the bay. A warehouse in Williamstown had caught ablaze, and such was the ferocity of the fire that those pier promenaders in Frankston could feel the heat on the wind from the flames.

The Mornington & Dromana Standard of 30 January 1909 wrote of a Miss Theresa Spencer who went for an evening walk most days along the pier. She slipped as she turned and fell into the water one evening. “Fortunately there was a group of young fellows sitting on the pier nearby,” and one of them threw his coat aside and dived in. I wonder if Robert Sherlock and Theresa Spencer stayed in touch?

There was more drama to a rescue in 1926, when stormy seas led to two sets of swimmers almost drowning near the pier. One of the heroes of the hour had the same family name as the two who had caught the shark some 40 years earlier – relatives maybe? In subsequent years an annual life-saving competition was held at Frankston, with the winners’ trophy named after the two rescuers, Henderson-Coxall.

People began looking for a body off the pier after a coat of a missing man was found on Frankston Pier in 1930. His body washed up two miles away 48 hours later.

September 1936 saw extraordinary action near Frankston Pier as a whole range of people got involved in a rescue in wild seas: this included RAAF planes, beacons lit on the coast to help the struggling lifeboat, two brothers out in separate boats to try to assist, and morse code signals used to guide rescuing craft to safety. The rescued men had used a tin to try to stop their vessel from filling with sea water, they all got drenched and sea sick, and two of their wives had to watch the whole affair from the cliff top – it took 8 hours to save the men.

In 1948 the talk was of the cost of upkeep, but the media got behind a campaign to stop changing the pier into a small jetty. The Standard wrote on 17 June 1948: “The Frankston pier has formed a famed part of the Frankston bayside resort for more than 70 years…and provided a popular promenade for prominent holiday-makers from all over Australia…” It would be a ‘crime against the people’ to destroy this ‘important utility of the community’.

1950 saw the extraordinary story of a 23 year old Scotsman Albert Bright, found with total amnesia on Frankston pier. It is believed he lost his memory by working too hard to earn his fiancee’s fare to Australia, but he did not even remember her name and could not recognise her picture.

He had arrived from Durham in NE England in April 1950. He was reunited with the fiancée via a tune he recognised, which then led to his remembering his girlfriend’s name. She came to Australia, they married, had a baby and all seemed fine till he disappeared again in 1954. Later that year, Bright’s father received a letter post-marked Sydney, saying he was fine and not to worry about him – There must be quite a tale to tell about this Frankston Pier story…

Other links and writings on Frankston Pier

This entry from the Simple Simon Says blog dates from 2011, but still feels relevant today.

This 4-minute diving video from Merv and Dann goes under Frankston Pier.

Frankston Pier made the News on Channel 7 in 2019 after a storm took away part of the pier.

What are your stories and memories of Frankston Pier?

Does anybody have any good stories to bring the history of Frankston Pier up to date?

Does anyone know the story behind the blue bench? Or whether the flags represent anything in particular?

Does someone know what became of Robert Sherlock and Theresa Spencer?

I have managed to follow up the Albert Bright story, but can’t say more just yet…

Or just get in touch if you have a favourite memory of your own from a visit to Frankston Pier.