Another palatial 1920s cinema in the heart of Melbourne, the Forum Theatre only occasionally shows films these days, but when it opened as the State Theatre had 3000+ seats for cinema-goers

Films aren’t shown too often at the Forum Theatre these days so we leapt at the chance to go to a screening on one of our days off during the Melbourne International Film Festival. It’s mostly a music venue now and has seen stars like Madonna and Oasis grace its stage in the past, but it seems to figure on the MIFF programme every year, so that gave Vintage Victoria a chance to experience another of those palatial cinemas that used to compete for people’s attention back in the 1920s and 30s. 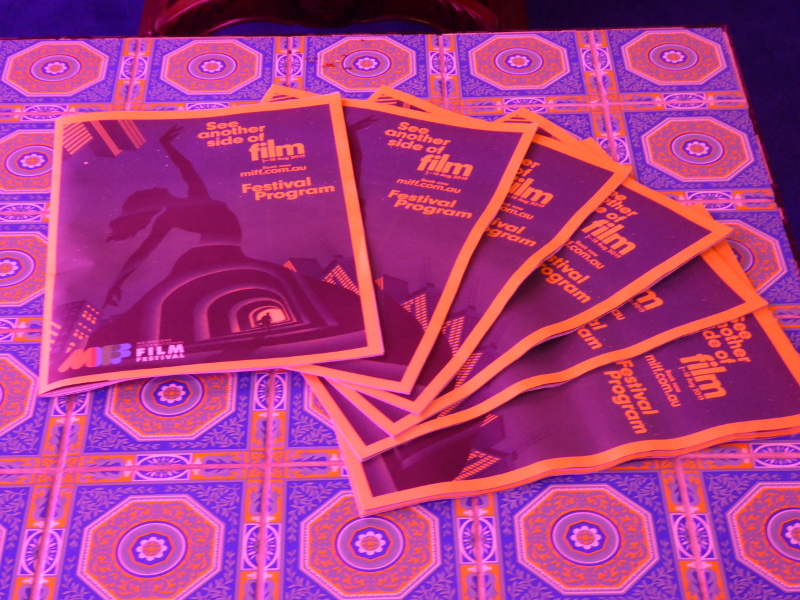 It’s been interesting to look at how the Forum tried to differentiate itself from its rivals the Capitol and the Regent in Melbourne’s CBD. So while lighting and sound seemed to be the Capitol’s USP, and the Regent went for the magical (almost Disneyland) feel, the Forum took you on a journey into the Arabian Nights, with its twinkling stars in the ceiling and an extraordinary array of classical sculptures, which are still dotted around the theatre even today. 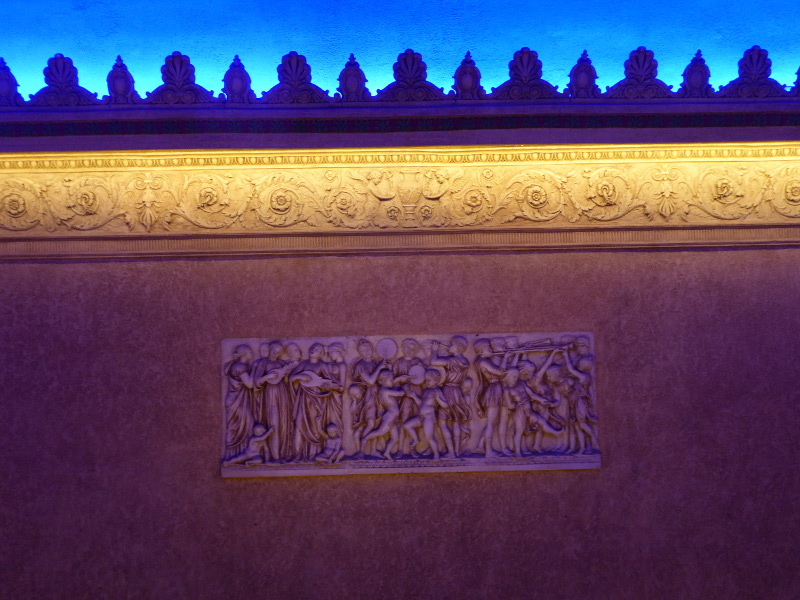 The outside of the Forum is an extraordinary combination of the gothic and the mythical, with dragons sitting on the balconies, and turrets taking the eye higher and higher. 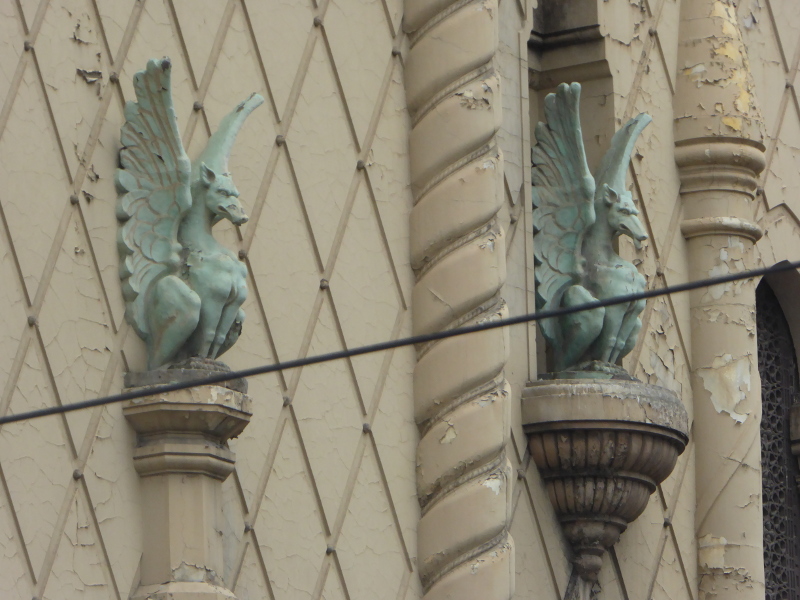 Even the Forum name keeping its vintage look, though the lettering dates from its division into Forum I and Forum II, I think. 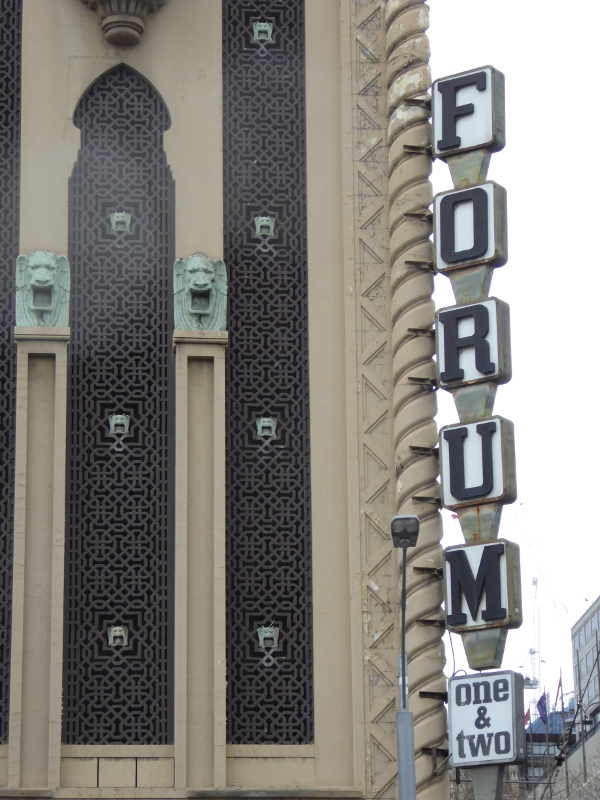 Walk inside to the dimly-lit foyer and you have the beautiful tiled flooring (I THINK only recently uncovered after a renovation undertaken by the owner David Marriner – he who also owns the Regent Theatre in Melbourne). 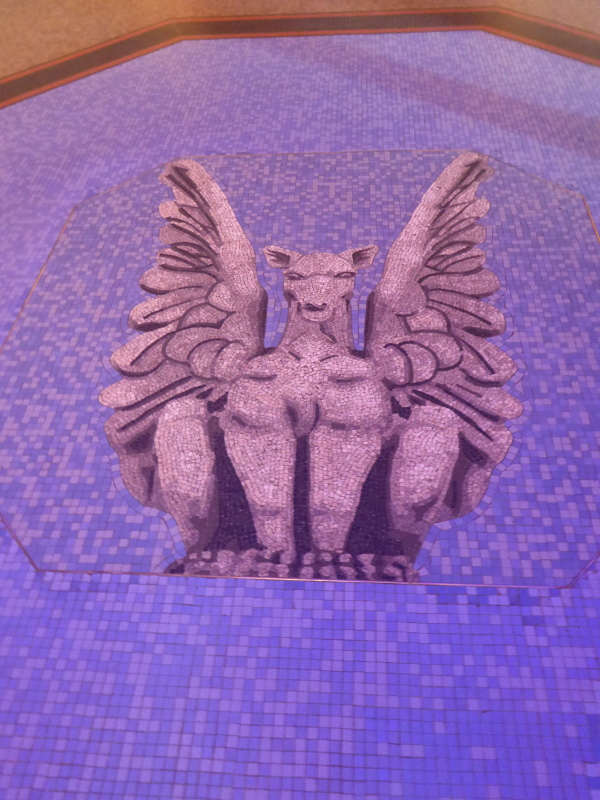 But look up for that starry sky, which still looks down over the entrance. 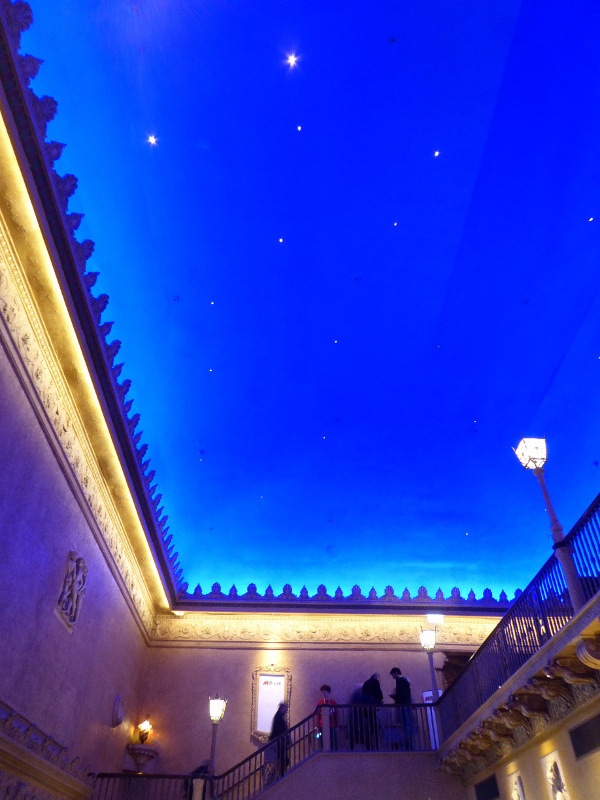 And then gaze around at the first of the sculptures. 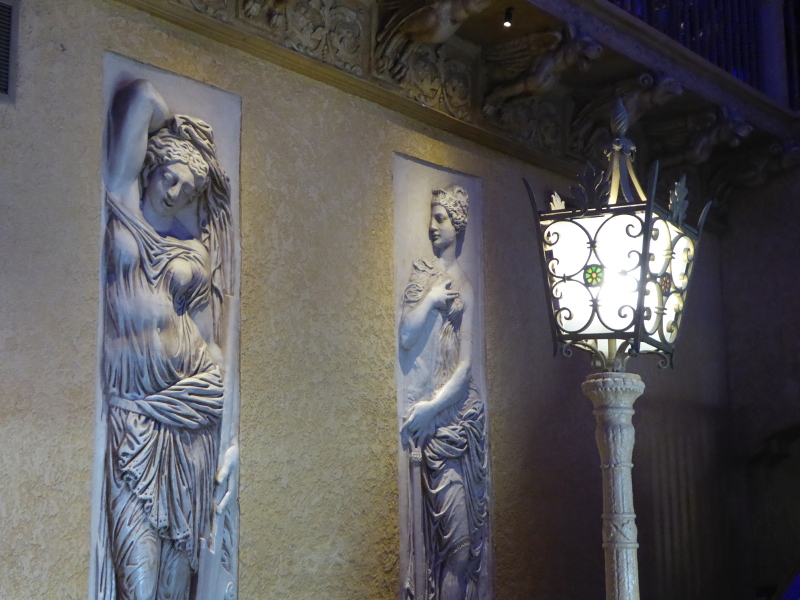 The two in the entrance foyer are classical women, so take a good look for gender balance before you head upstairs to the decidedly male look to the figures upstairs and in the main auditorium. 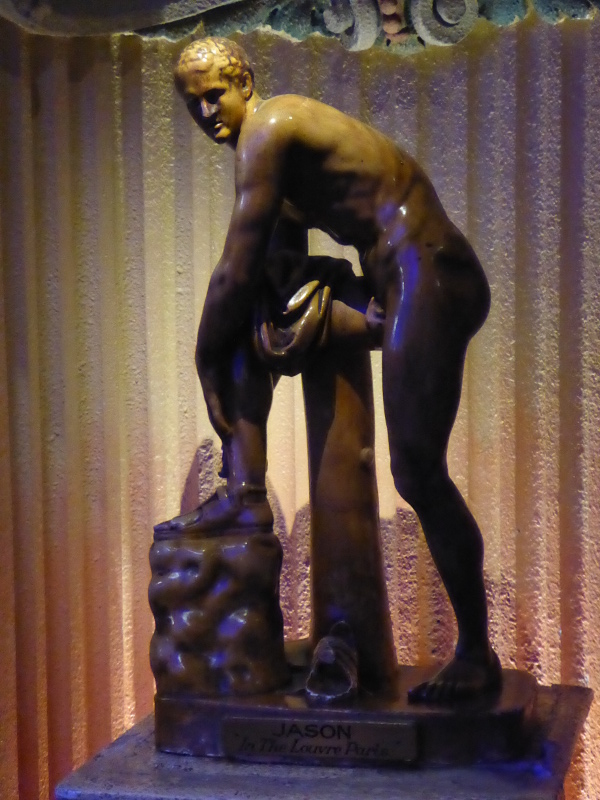 In the corner off to the side is the sign for the ‘Gentlemens Lounge’ (no apostrophe), which takes you down a staircase, past gothic lanterns, past a closed-up fireplace (which I guess might well once upon a time have been the ‘lounge’ area, past growling lions’ heads to the men’s toilets, which are beautifully tiled themselves and well worth a look, whatever your gender. 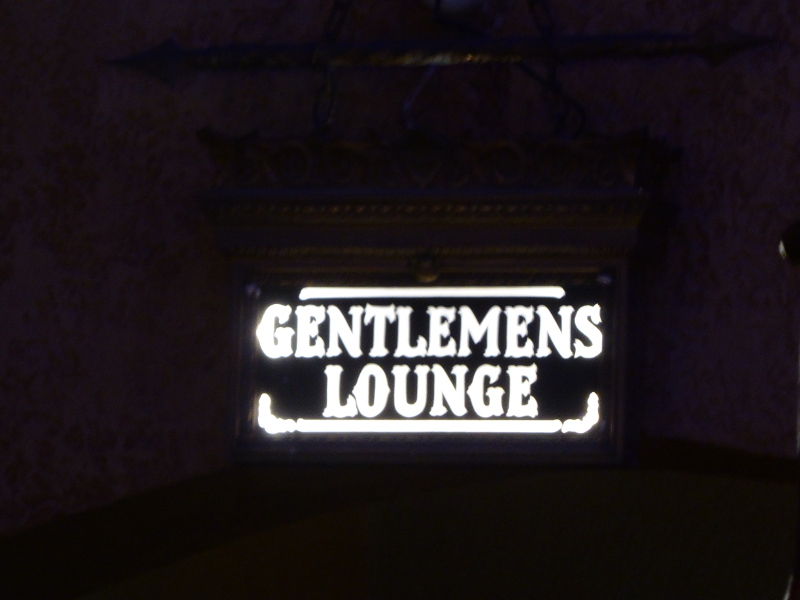 Yes, because all toilets in the Forum are gender-neutral, which can only be a good thing. Though I couldn’t help notice the different reactions from two women who walked past me towards the toilets as I wrote some notes. The older lady walked straight back out, exclaiming: “I’m not going to walk past a row of urinals,” while a younger woman just went in, did her thing and walked out again as if there was nothing unusual in any of it. 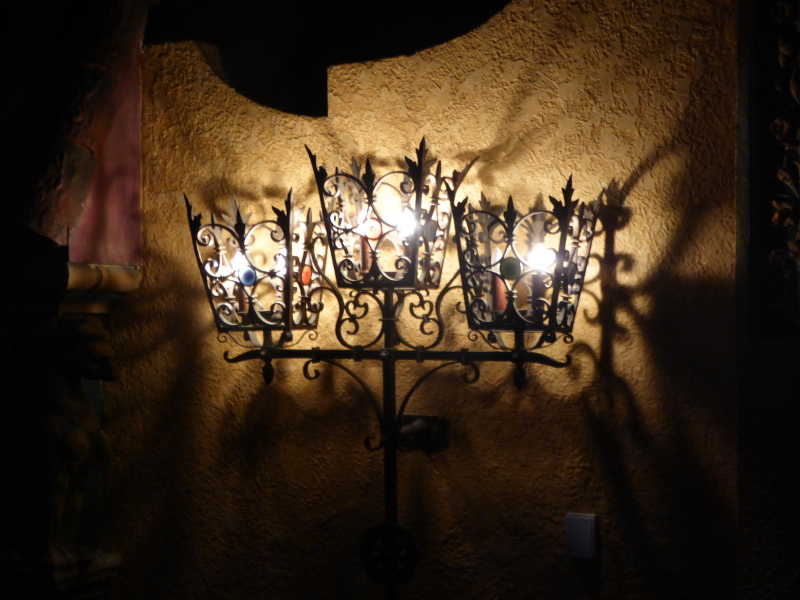 Up the tiled staircase we went for our film. 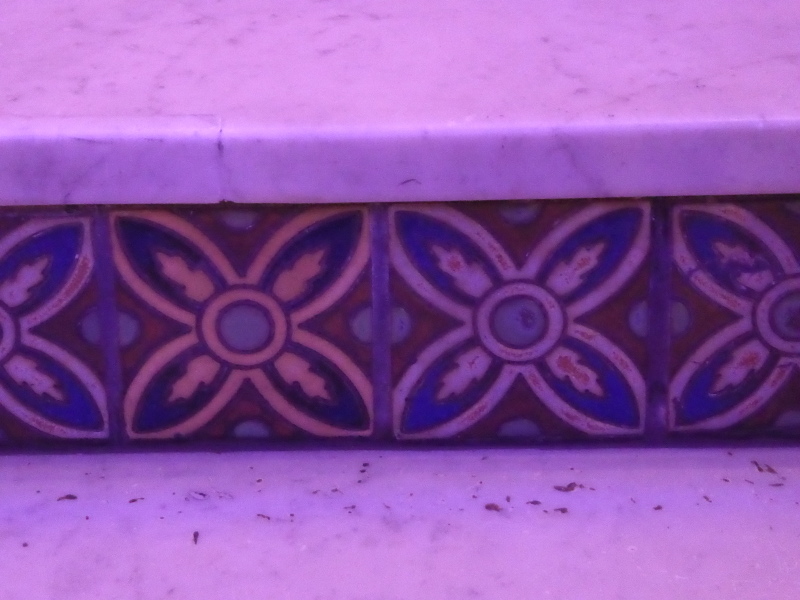 Past Atlas bearing his load. 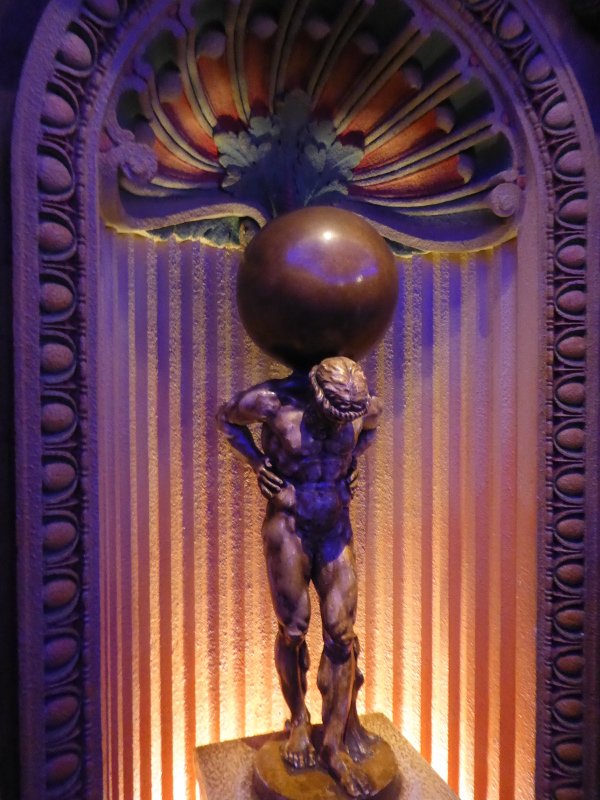 And into the main auditorium, which was also pretty full considering this was a film being shown during office hours on a Friday. 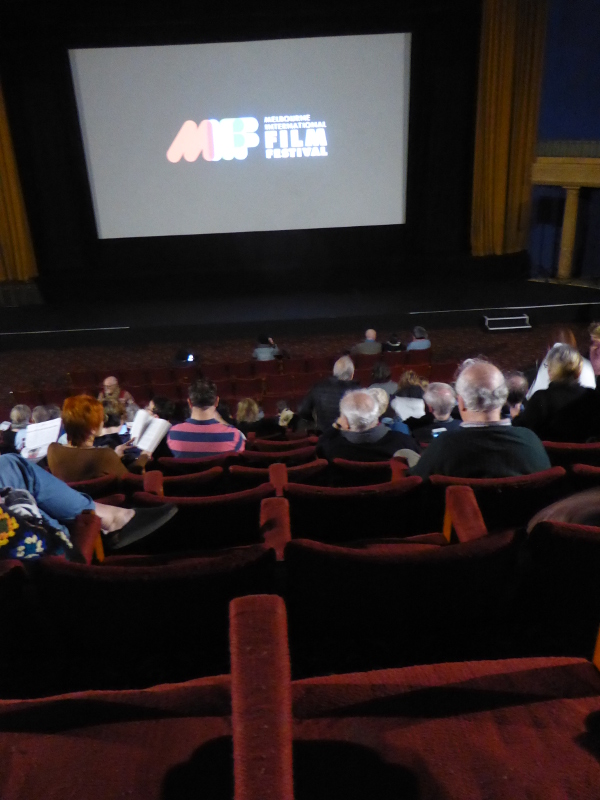 We took a seat towards the back as usual, and were pleased to see almost as many people waiting patiently reading a book (or even a newspaper!) as there were staring at their mobile phone screens. But, yes, even in a vintage place like the Forum the mobile device does still have those magnetic powers that seem to force its owner to look in any spare second, rather like smokers would do in a spare few moments back in the 1950s.

The film finished and we slowly wended our way out past more gothic-looking lanterns and yet more of those ‘classical’ (but in 21st century somehow homo-erotic) statues that seem to stand out in any of the cinema’s nooks and crannies. 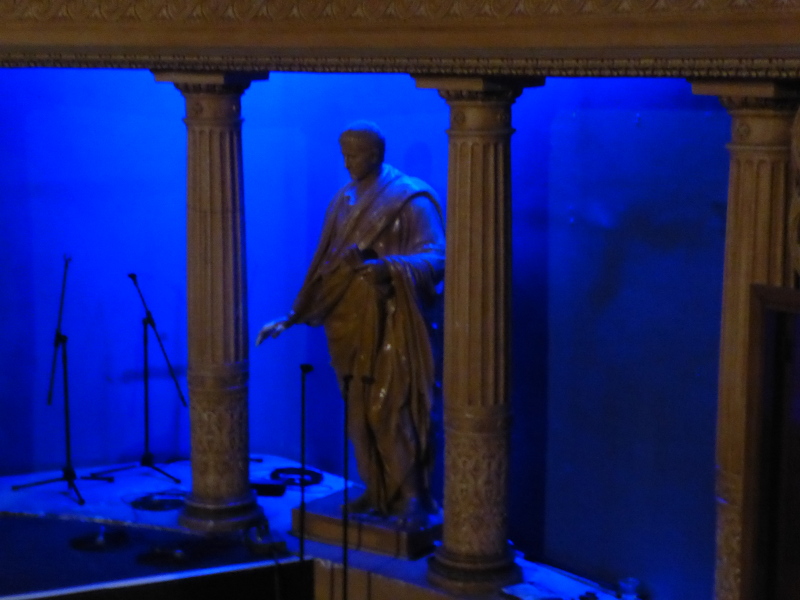 It got me thinking that, in addition to the Melbourne International Film Festival, the Forum ought to be promoting some sort of annual Dracula (or horror movie) weekend, maybe around 31 October? And it should certainly be hosting a whole host of movies if ever there was a Gay Film Festival (forget the LBT in LGBT for this cinema décor…).

Oh, and before you leave the Forum Theatre building, don’t miss the beautiful little waiting area on the mezzanine floor. What a great spot to sit and wait for your date… 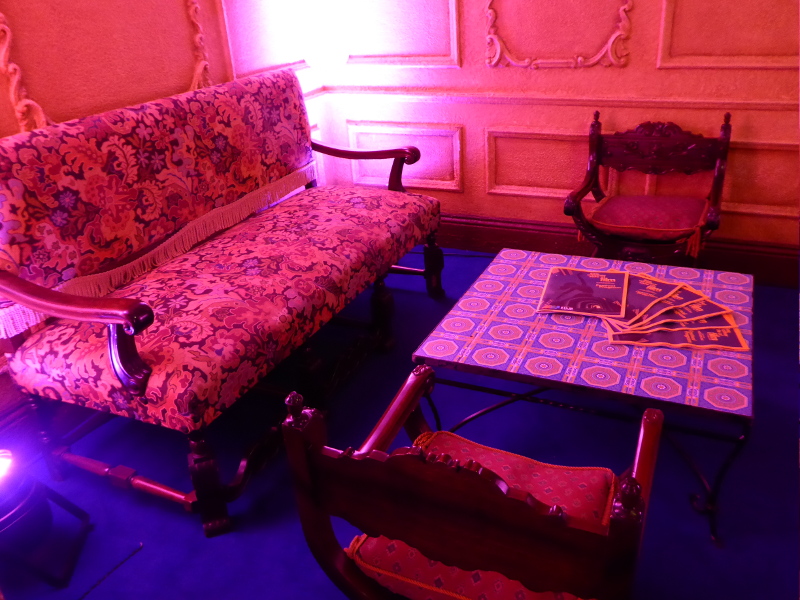 They don’t often show films at The Forum these days, but it seems to be a regular venue for the Melbourne International Film Festival so you can certainly watch a movie in August there.

There are other musical events at other times of the year, and a neighbour musician I know has actually performed here. No idea what the admission prices are for these events, though.

Do check out the toilets. All gender-neutral and very vintage!

History and stories about the The Forum Theatre

The Forum Theatre opened in 1929, but was then called the State Theatre.

It was the latest upping of the ante in a battle for supremacy among movie theatre giants Hoyt’s and Union. Interestingly enough, the Regent – now owned by the same Marriner Group as own the Forum) was flagship of the rival outfit and went up in Collins Street just before the State Theatre.

So the State Theatre needed to be different.

It had the largest organ in Australia at the time, brought over from New York. And the overall feel was supposed to be of entering a Florentine garden after gazing at the Venetian palace facade. It was billed as Melbourne’s only ‘atmospheric theatre’, whereby you weren’t just here to see a film, but to have an immersion into a whole other world from the moment you arrive.

Venus, Apollo and other Greek Gods would line the walls, with tapestries, paintings and more sculptures to add to the romance. All of this modelled, apparently, on a Chicago theatre.

The reviews were almost uniquely positive, except for a snippet I found in the Workers Weekly, which seemed to be the only newspaper alerting the public to that fact that there had been 23 workplace accidents causing serious injury to people working on the State Theatre. It criticised the ‘speed-building’ concept and saw the State as a ‘glorified wedding cake!’

Another letter to a newspaper about 6 months after the State opened in 1929 was from an Australian pianist, annoyed that she had been refused permission to learn how to play the Wurlitzer when she visited America because – she argued – only Americans were allowed to learn, which meant that every Wurlitzer bought for an Australian cinema had to be accompanied by an American pianist, thus depriving jobs to Aussies. She was particularly annoyed because – she said – the State Theatre organist had played a song mocking the Australian Prime Minister…

The opening night in February 1929 featured a film called The Fleet’s In, with a late Buster Keaton as the ‘B’ movie that day. Miss Margot Best was selected as ‘hostess’ for the first 6 months of the Theatre, which had over 3,000 seats and was the biggest in Australia. She would have been there in April 1929 when the theatre screened its first talkie, a 1928 film with Gary Cooper, called ‘The Shop Worn Angel’. The opening talkie (also known as ‘all-dialogue’) session also featured a film directed by Cecil B.’s brother, William C. De Mille. I guess ‘The Doctor’s Secret’, and whatever other output he had to his name didn’t propel him to the same heights as brother Cecil…

There were lots of jobs we wouldn’t expect to see in a cinema these days, and shortly after the cinema opened in February 1929, a ballet mistress was appointed, presumably for the off-screen entertainment at the State. (Jennie Brennan). The hostess was obviously female but all the ushers on the opening night were male.

Descriptions of the opening night suggest people wandered round the theatre in awe of all the decorative features during the interval.

A strange incident occurred in the cinema in December 1934 when the Argentine Consul was found in the gentlemen’s cloakroom by the coat racks with a revolver near him and a bullet in his head. This happened during that night’s showing so the film audience will all have heard the shot fired at about 10.30pm. Suicide or another Melbourne gangland killing??

The State might have hosted its beauty contests and political discussions over the years, but in 1953 there was a competition for school kids to create a Royal scrapbook commemorating the Coronation. Top prize for one boy and one girl under 14 would be a book on the Coronation signed by Sir Laurence Olivier. The scrapbooks needed to contain 12 pages (‘brown paper’!) and be delivered to the State Theatre. I wonder who won?

In the 1960s, the State Theatre was split into a two-screen cinema, with the upstairs section called the Forum, a name which has continued in use through to today. In 1985, it closed as a cinema and was bought by a Pentecostal church, which then itself sold on to the current owners the Marriner Group, in 1995.

Other links and writings on the The Forum

Time Out interviewed the Marriner siblings who run the place and found out that carpets covered those tiles on the foyer floor in 1937. The original marble staircase was uncovered. And I realise I missed the astronomical clock…

There’s more great history of the Forum Theatre in this blog post from MarvMelbourne. It includes great photos showing the foyer very like the present day foyer but in 1929. The wurlitzer brought from America is apparently still in use in Moorabbin Town Hall.

What are your memories of the The Forum Theatre?

Is there anybody still around today who can remember going to the Forum Theatre before it was split into two cinemas in the 1960s?

What’s the best film you’ve seen there or was it a musical or cultural event you attended that sticks with you as a great memory? Have you performed at the Forum as a musician?

Who won the Royal Scrapbook signed by Sir Laurence Olivier in 1953? Did anybody reading this enter the competition?

Has anybody else seen a film at the Forum and got a story to tell about the place?

We’re not very far from the Cathedral Arcade in the Nicholas Building, so if it midweek, I’d be heading to the Cathedral Coffee there. But does anyone have a top tip for coffee nearer to the Forum Theatre?