Flinders Pier was built in the 1860s, just a few years before the first telegraph cable connecting Victoria and Tasmania was rolled out into the sea right next to the jetty.

Flinders Pier juts out from a little peninsula on the Peninsula. The road down to it from the Flinders township sweeps its way down the cliff to a (relatively) sheltered area, and the first thing you see are the number of small boats anchored up in what must be regarded as calm waters protected by the nearby headland. 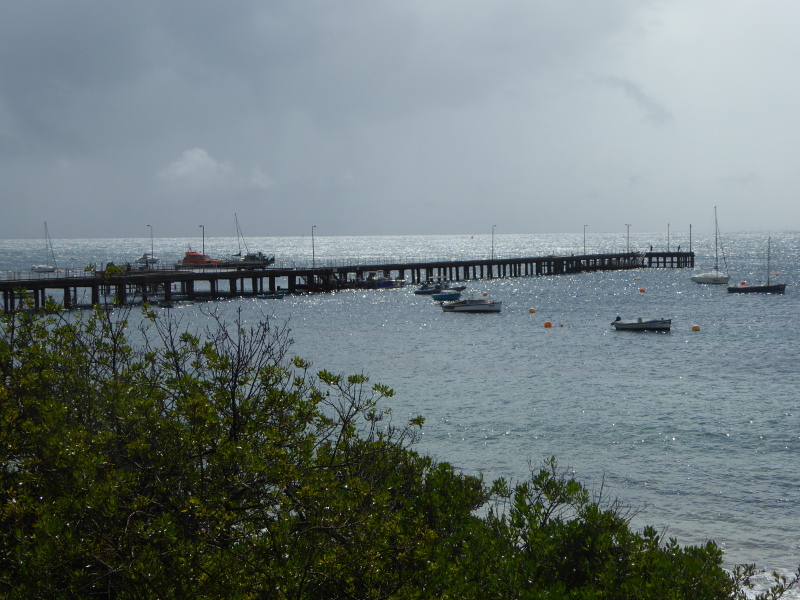 The pier has had its fair share of damaging wind and waves, though. So much so, that much of the original pier is now fenced off, with a new concreted pier running parallel before it dog-legs back onto the old structure. 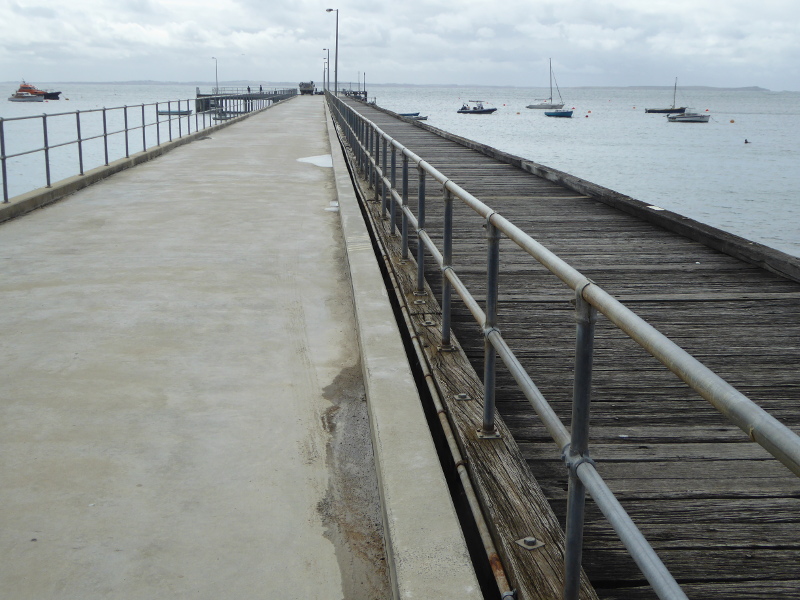 There are still enough old planks to walk on for this to stay in my catalogue of vintage piers of Victoria, though, and by the time you reach the L-shape end of the pier, it is possible to see from the side how many of the piles holding the pier up look pretty vintage, even if a lot of the boardwalk is made from pretty new timber. 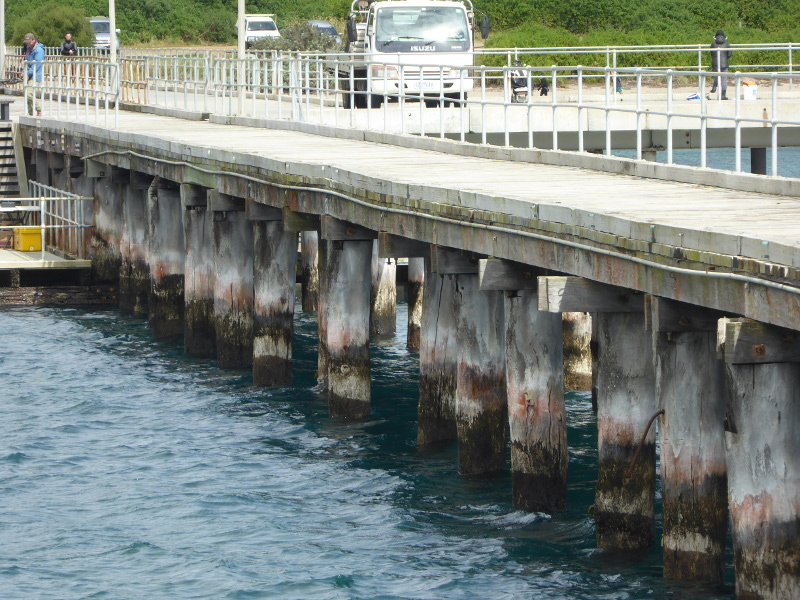 We were fascinated by the main fishing boat moored alongside the pier half way down. Two guys were offloading their oyster catch, ready for sale to locals later that Sunday morning. But we were also transfixed by the lack of barriers on board, especially where the oysters were being stacked up. Piloting this vessel in rough seas, you’d want to stay pretty close to the wheel or be roped onto something secure to stop you falling overboard. 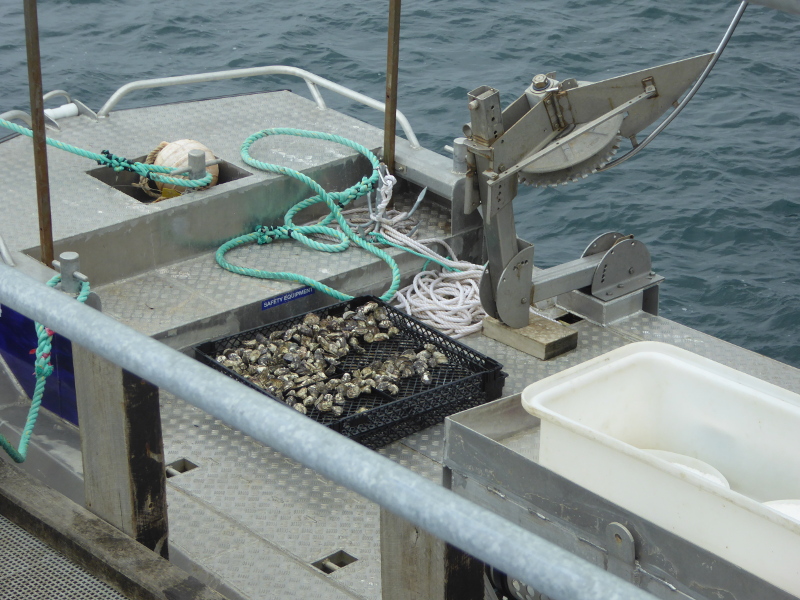 Talking of pilots, there was a pilot’s ship resting up not far from the pier, though I’m not sure where that is based or which channels it steers through. 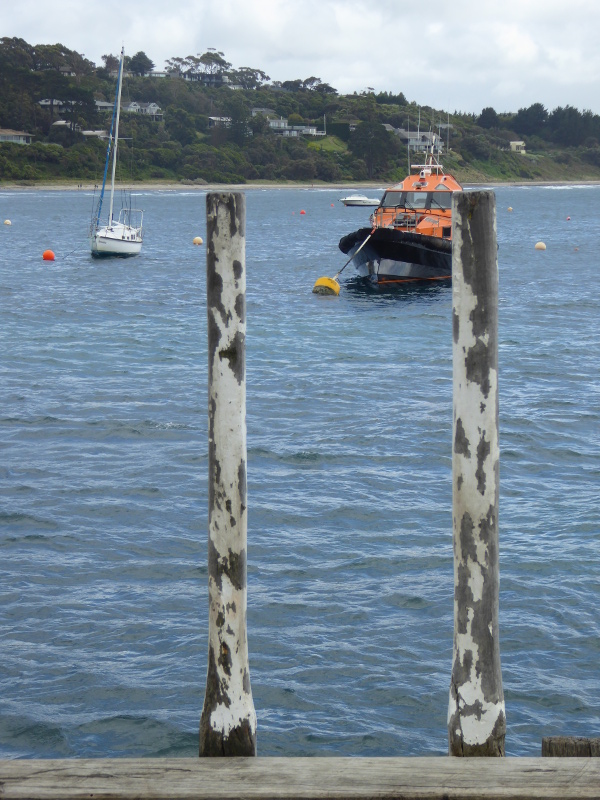 A group of divers were also in the water near the Pier, none of them bothered by the wind or wet. I wonder what sights are to be seen underneath the surface here? 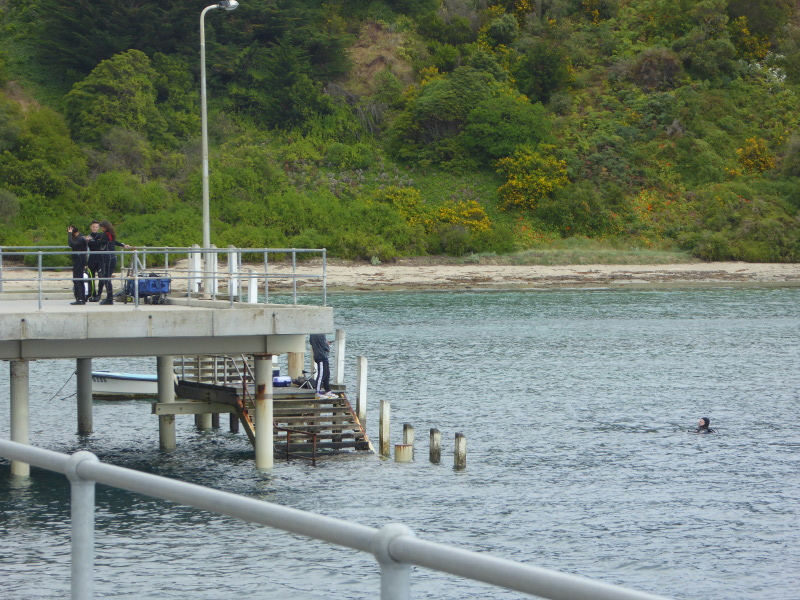 It was interesting to read on some of the information boards dotted around on the shore end of the pier how many of the early fishermen at Fllnders were Chinese. The two lone fishermen (well, one woman actually) were either descendants of those early anglers, or more recent arrivals. 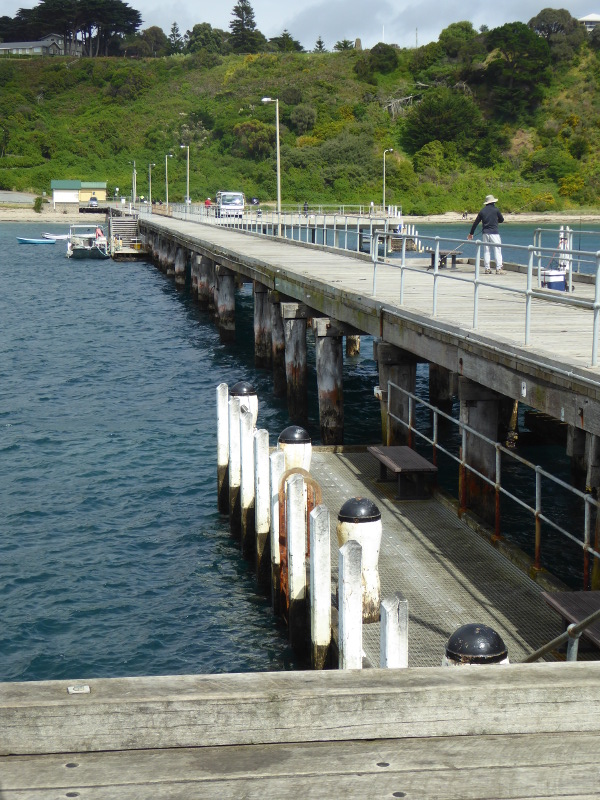 There’s no shelter out on the end of Flinders Pier, though there are a few benches to sit on. We turned back for shore not long after arriving when we saw a dark cloud looming up over that headland, and before we had gone 20 yards, the rain began to bucket down at almost horizontal angle. 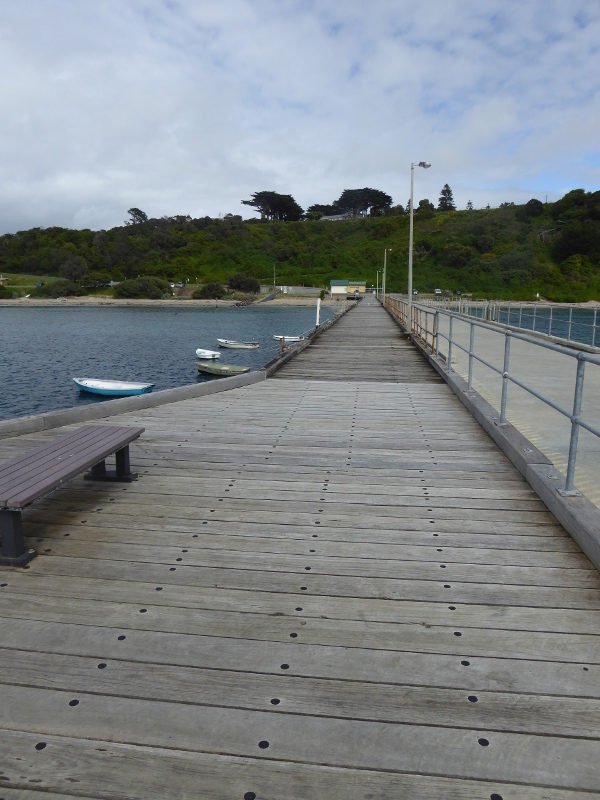 We sprinted back to shore, but not before the left side of my trousers had got drenched (while the right side remained bone dry, such was the angle of that sharp shower). Those two anglers had come better prepared, and although one almost lost their cushion in the squally blast, they got out their rainproof wear in double-quick time, so clearly were well-prepared for this kind of thing. 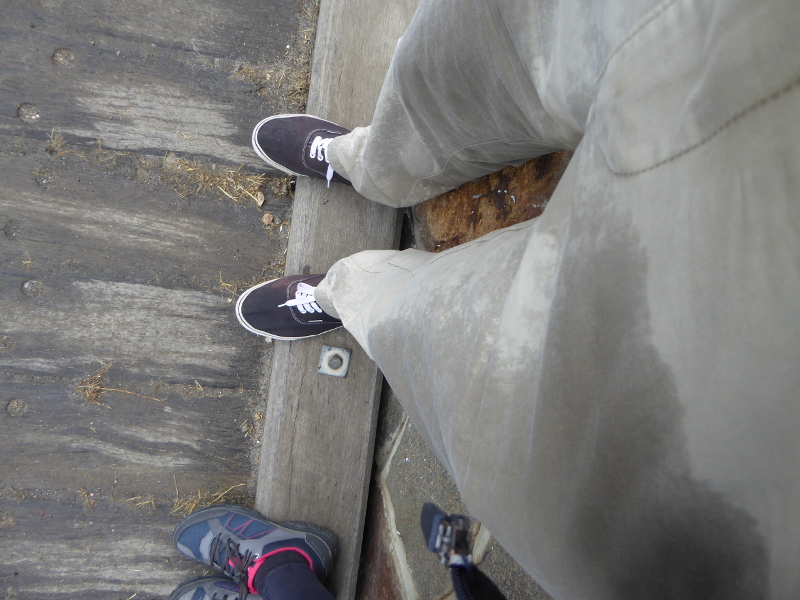 Back on shore, we were intrigued by the tracks leading down a slipway running parallel to the pier, used in the past, it seemed, for taking the boats to and from the water. This was built in 1949, apparently. 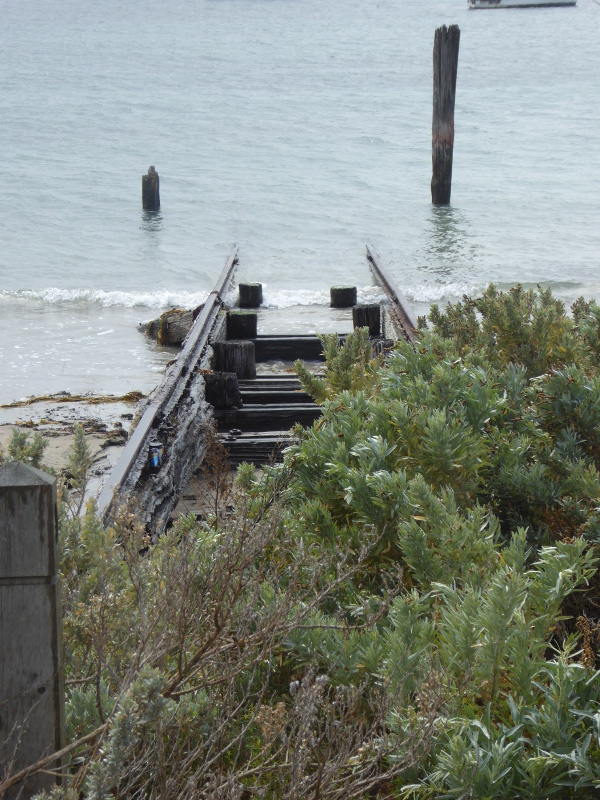 And then, just a few yards further on is the most fascinating part of Flinders history: the spot where they rolled out the first lengths of cables that eventually led across the 300+ kilometre stretch to Tasmania. 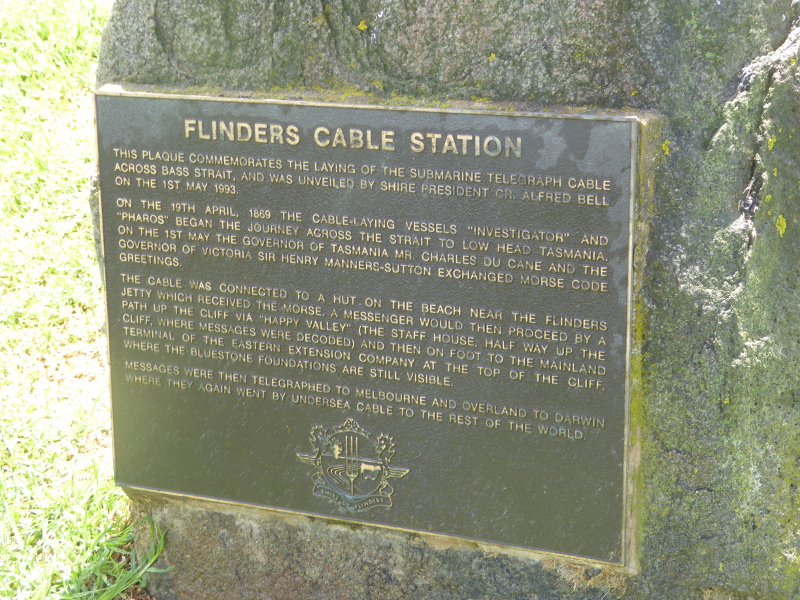 Information boards here tell the story rather well, as the first messages (between Governors of Victoria and Tasmania) were received via the cable by morse code, then someone ran up the hill to get them translated into words, before someone else dashed into the township to the post office in Flinders to send the message by telegraph to Melbourne. Not as quick as a mobile phone call 150 years later, but for its time, this must have been revolutionary. 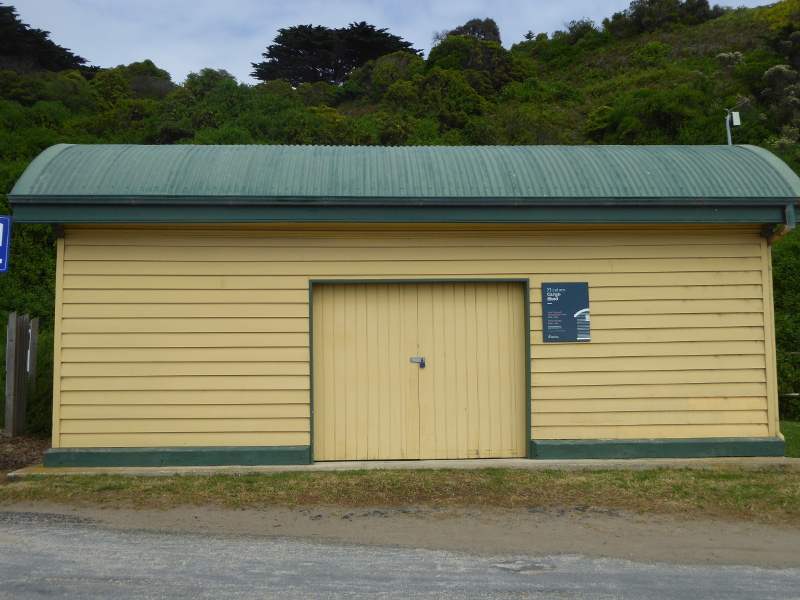 And then finally, there is the 1871 cargo shed, built just two years after the laying of the Tasmanian cable. It’s a beautiful vintage building in its own right. But the novelty here was also interesting: the curved metal roof was the innovation at the time, a design used for water tanks mainly, but one of the last such roofs remaining in Victoria today. (Apparently it used to stand right on the shore end of the pier, but was then moved to its current position over the road tucked under the cliff) 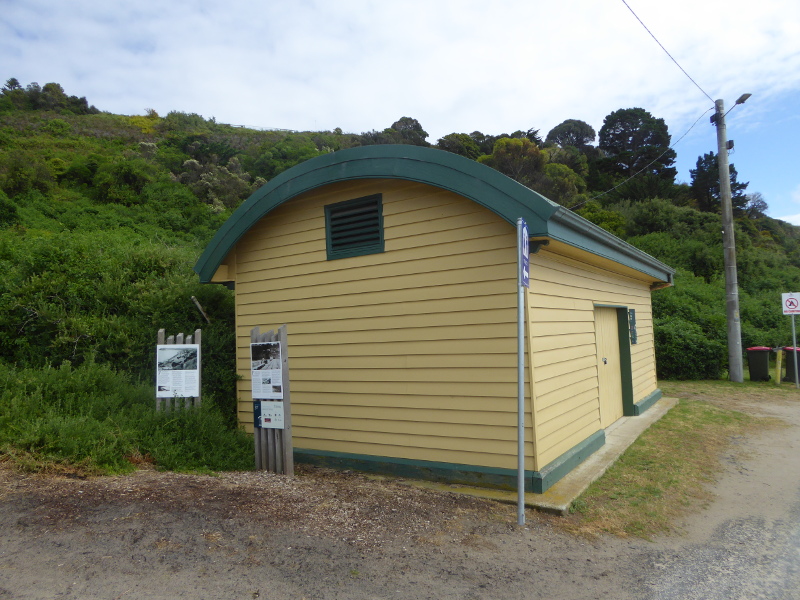 Flinders Pier was a busy little place, but more of an activity centre than for people strolling along for a breath of air. Given how much was going on here around 1869-71, maybe it has always been like that? 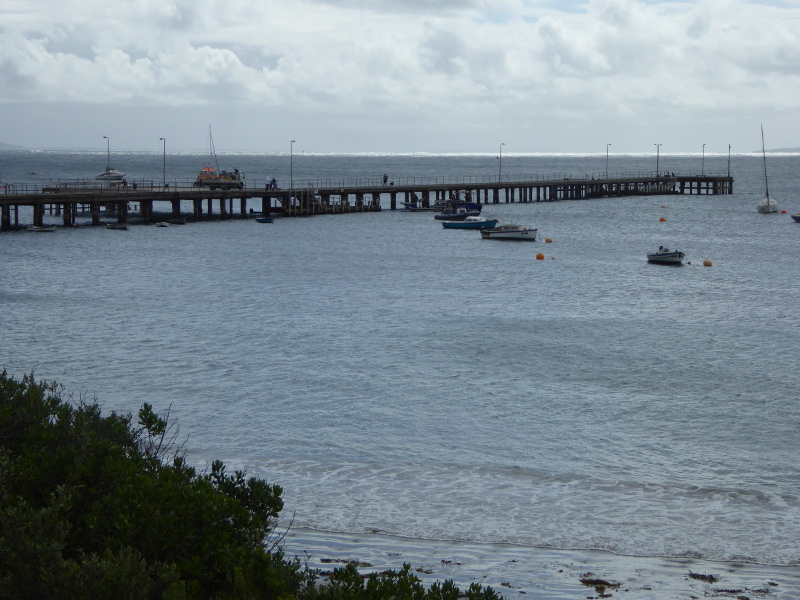 Lots of benches on this pier but no shelter if a rain shower suddenly hits so keep your eyes peeled, or you’ll be caught out, and soaked, as we were…

There are public toilets near the pier at Flinders.

No access during our visit to either of the sheds near the pier.

History and stories about Flinders Pier

There was L800 in the budget estimates for 1865 to extend the Flinders Jetty, so it must have been built some time earlier than that. The information boards suggest 1864-65, so they’re a bit vague, too. 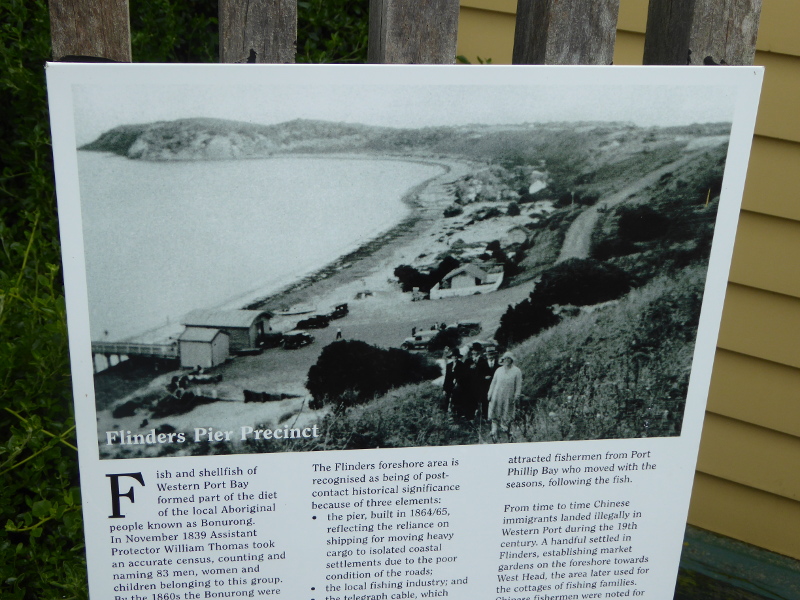 A sailing boat carrying a cargo of lime ended up a wreck on the rocks near the jetty in 1876, after taking on water round the coast near Cape Schanck and then seeing the cargo set alight as it came into Flinders for shelter.

Scotsmen living in Australia in 1883 might have been alarmed to read a brief news item in one paper: “A man named Robert Burns jumped into the sea off the Flinders Pier yesterday, and drowned.”

1906 saw drama off Flinders Pier, when the captain of a ship anchored a mile out to sea tried to row to shore at the pier in a storm. He and his two crew members couldn’t make it so tried to turn back, but then found themselves taken by wind and currents past their main vessel and towards the open seas. They managed eventually – after 20 hours adrift – to find land across on Phillip Island, and had to return to Flinders by coach the long way round.

A 1907 photo in the Melbourne Leader newspaper showed a very long structure reaching out into the bay.

Other links and writings on Flinders Jetty

The Travel Junkie bloggers visited Flinders Pier in June 2020 – had much nicer weather than us by the look of their photos.

Mamma Knows South is a big fan of Flinders Pier, judging by her entry.

Peter Fuller’s diving blog shows what those divers off the pier might have been looking for down there.

And yet more under the surface, this time a stingray photographed by the Dolphin Research Institute team.

This Scuba Diving YouTube channel has amazing video footage of an octopus near Flinders Pier.

And finally, this April 2020 ABC story of a fishing trip off Flinders Jetty and a boat going missing. Not sure the outcome – hope it ended well…

What are your stories and memories of Flinders Pier?

Has anyone got any stories to bring us up-to-date on Flinders Pier? The last Trove press clipping I found dated from 1907, so there’s a fair bit of history to catch up on…

Any regular fishing folk or divers fancy telling us a story of their experience off the pier?

Has anyone been inside either of the sheds near Flinders Pier? Did I miss much by not getting inside?