The new Dromana Pier dates from the late 1950s and is about half the length of the original 1862 pier, but it’s only thanks to local campaigns & maintenance work that we even have a Dromana Pier still

Dromana Pier is not what it once was, though it’s only thanks to local campaigns that the pier is still there at all.

The trouble with many piers, like the old sea baths that used to dot the coastline, especially around Port Phillip Bay, is that they are very vulnerable to the rough seas that blow up regularly round these parts. Wooden structures like the original Dromana Pier were easily torn apart by the force of the waves, while the newer 1950s pier we see today has become vulnerable to that 21st century ailment: concrete cancer. 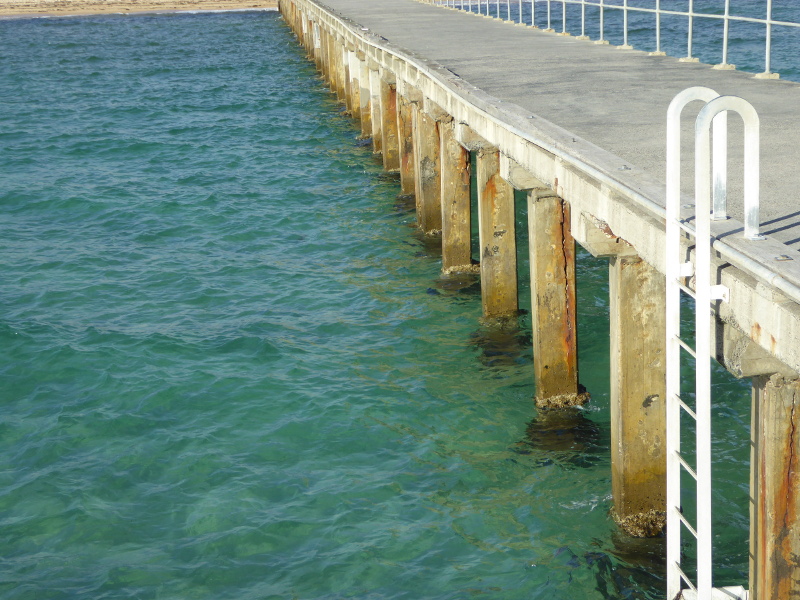 No sign of such traumas on the bright, sunny morning we turned up. The bay was a beautiful blue, with the shallow waters below the pier verging on Caribbean turquoise, and what waves there were lapped gently against the pier stumps. 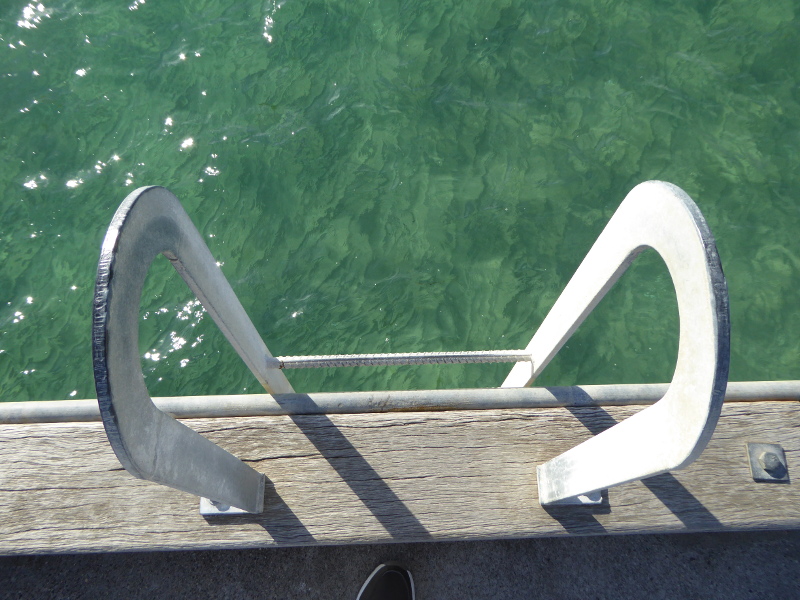 The modern Dromana Pier is only a fraction of what was built in the 1860s and 1870s. The pier then reached out nearly 500m into the bay to allow the local ferries to berth here, but the new version is less than 200m long, with no sheds or amenities along it. 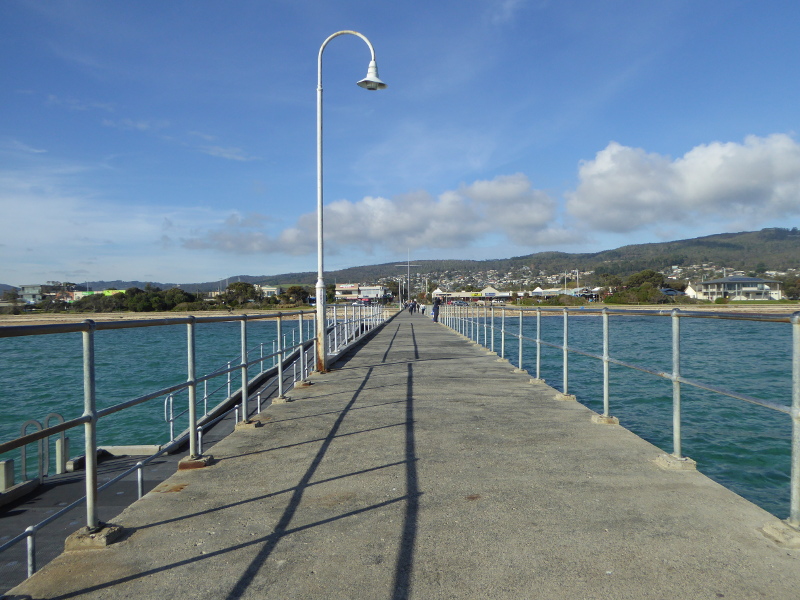 Well, I exaggerate slightly. There are three lamps to light the way at night, and while not particularly vintage, they do line up nicely along the length of the pier; and there is one bench right at the end of the pier, so you can have a sit and watch the views after your short stroll from Dromana itself. 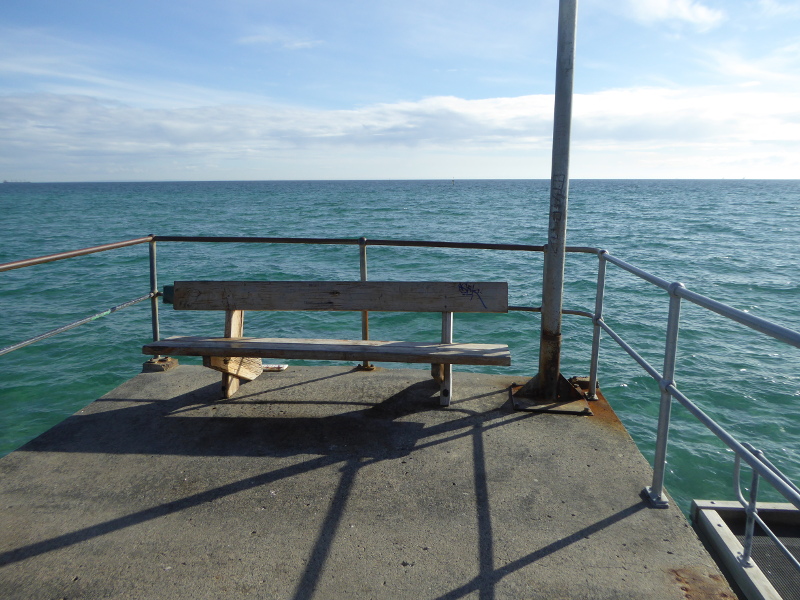 There is also now a new mooring platform at a lower level than the pier itself, and this is part of the local work carried out recently as part of the campaign to save and protect the whole structure. 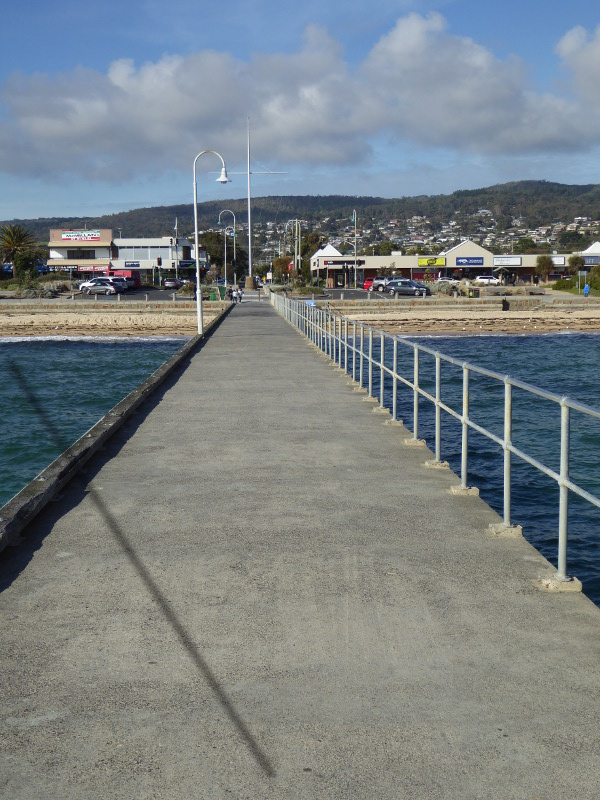 But horror of horrors for this lover of walking on water, Dromana Pier is now without boardwalk, except right on the shore end over the land itself, so none of those exciting glimpses of waves flowing in under my feet through the gaps in the pier planks. 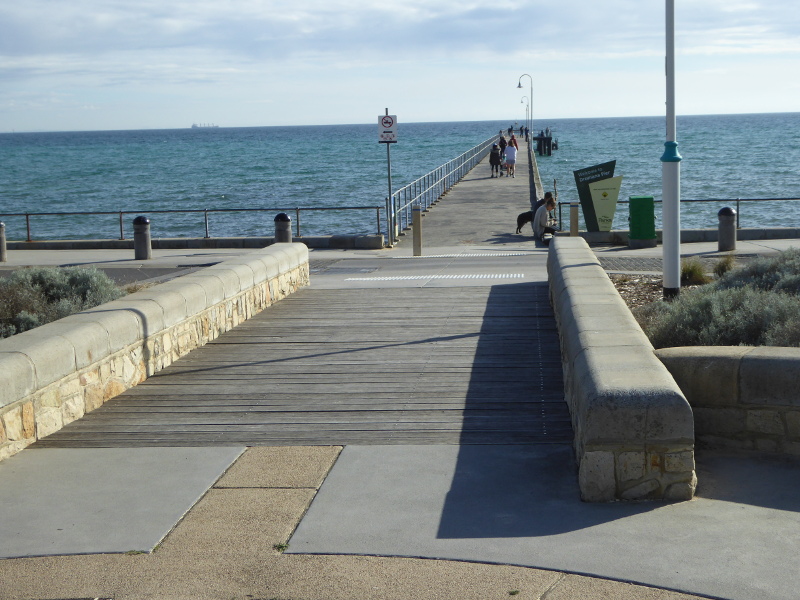 I’m glad they have worked locally to keep this place, though. A walk along the pier is always a pleasure, and there was a small cluster of people doing just that on the morning we were there. And the views from Dromana Pier are glorious. 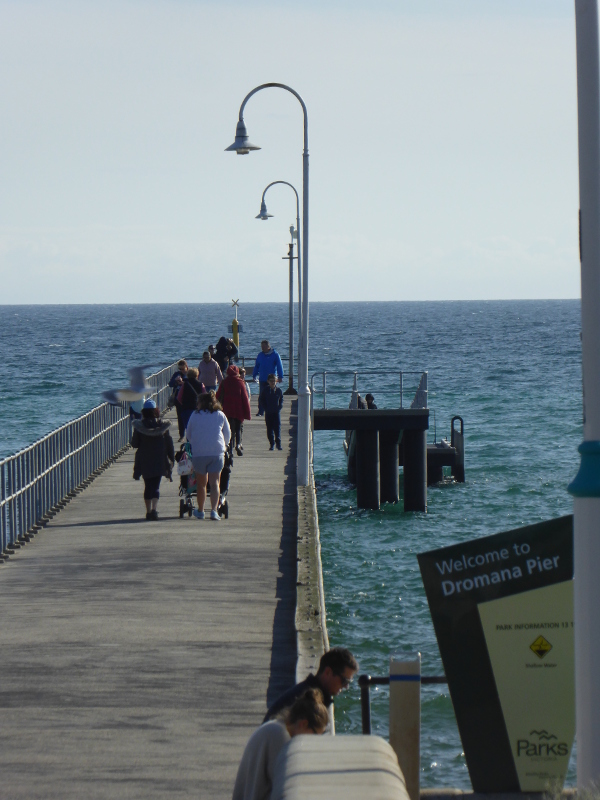 Turn round at the end of the pier and you look towards Arthur’s Seat, which is apparently the highest point on the Mornington Peninsula. That means there must be great views of the pier from Arthur’s Seat, as suggested by the photos we loved to see in the window of the local doctor’s surgery in the main street in Dromana. 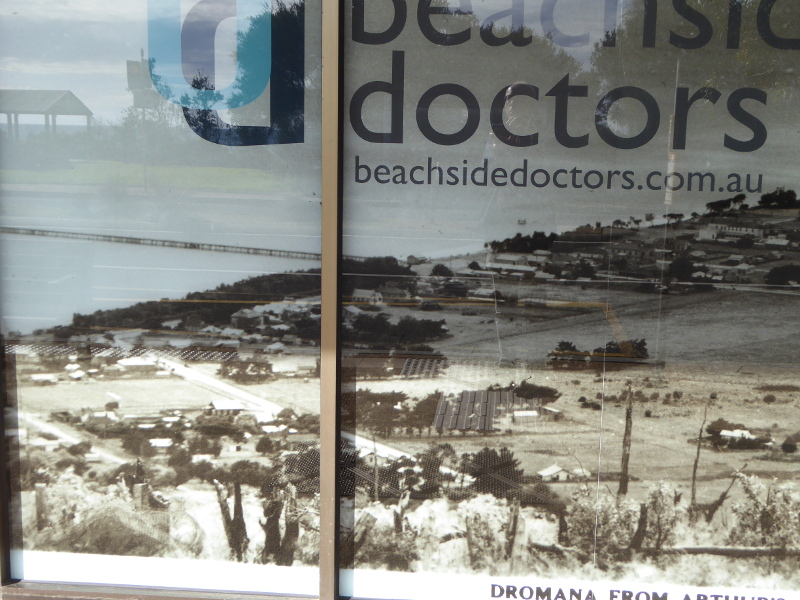 So thanks to the Beachside Docs for giving us a view of just how impressive Dromana Pier once was, when it was at its longest. 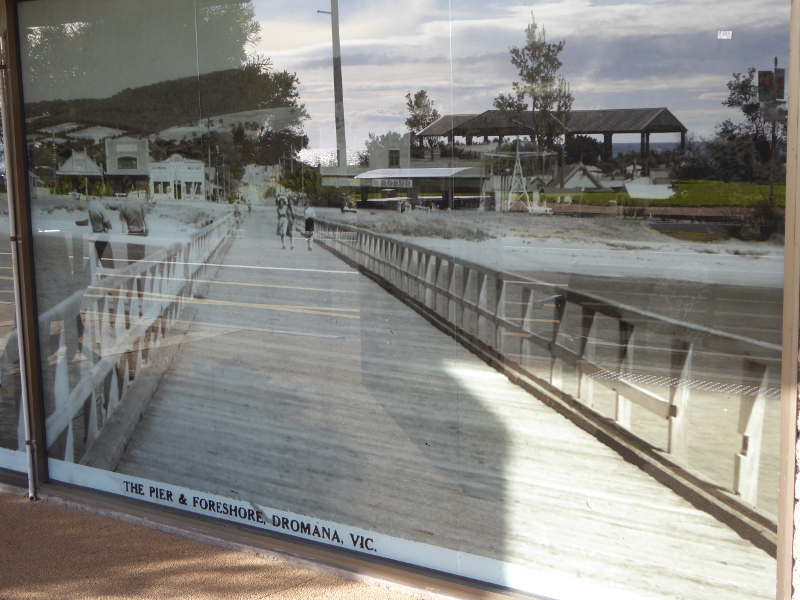 Along the beach at Dromana is also a smattering of those colourful beach huts, which Brighton (a few miles up the coast) seems to have made into its local icon, but which actually can also be found in several of the Port Phillip Bay resorts, including Dromana. 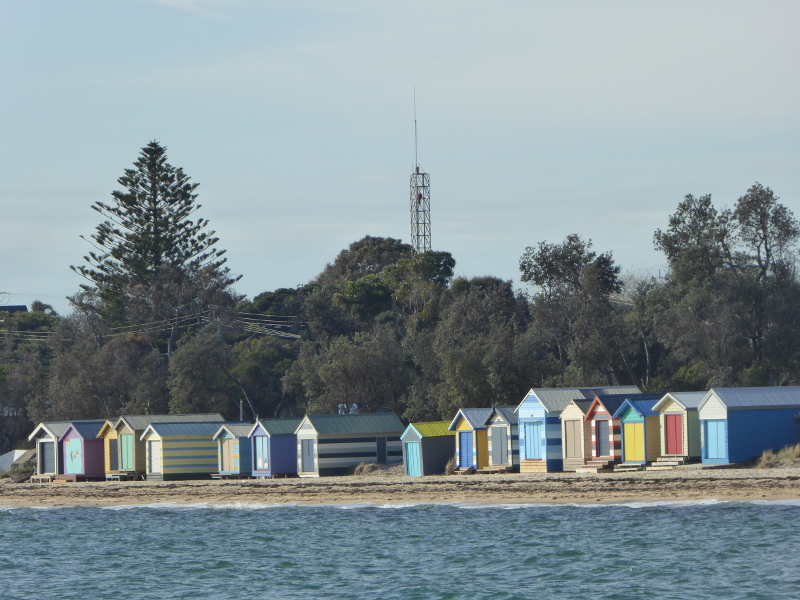 We didn’t see much wildlife here, except for a very large white jellyfish (I had no idea Port Phillip Bay had so many jellyfish, seemingly all year round), and there were no fish in sight, which might explain why nobody was fishing off the pier that morning, either.

So, good luck to everyone campaigning – and putting in the hard hours – to keep Dromana Pier going. The links I found to articles written about the pier in local media suggest some are calling for the pier to be lengthened so that ferries can berth here again. That would be fantastic, but for now I’m just happy that Dromana Pier still exists.

One bench but no shelter anywhere on the pier.

Nearest toilets: Back on the reserve just south of the pier

History and stories about Dromana Pier

The first Dromana Pier was built in 1862, and after an extension to about 500m in 1873, it was the second longest pier in Port Phillip Bay.

This was originally a place for steam ferries around the bay to berth rather than being a pleasure pier, as such. But those ferries brought thousands to Dromana looking for rest and recreation so in that sense it was a pleasure-giving pier.

Dromana Racecourse plugged itself as just three minutes’ walk from the pier, so I guess many of those pleasure seekers would head straight to the course off the ferry. But adverts like that ended in about 1925, so I’m guessing the racecourse might have struggled to survive the Depression years.

Dromana Pier was also used for loading and delivering freight and market produce. And one early controversy saw horses in certain shoes not being allowed to walk along the pier to load or offload from boats. After a complaint to the local MLA that this was interfering with trade in Dromana, a new ruling allowed horses in any kind of footwear to walk the length of the pier. I wonder what the offending horse shoes were like?

As with any structure by the sea, there were regular incidents and occasional tragedies getting written up in the newspapers in the early days of Dromana Pier. A group of young ladies went for a bathe near the pier in 1907, but couldn’t swim, so one was in danger of drowning when she was dragged out of her depth. No Bondi Rescue style lifeguards in those days, so a passing boatman called Harry Griffith turned local hero by jumping in to save her.

And a sight you wouldn’t see these days was a pony going for a cooling dip one January day in 1905. It had a rope attached to keep it safe, but this got tangled up round one of the piles and the poor beast was strangled in the water.

There was a notice in 1931 of the shed on the pier being demolished and rebuilt on the end of the pier. Dressing shelters were also to be put up on the shore end of Dromana Pier, for those fancying a dip in the Bay.

Storms in 1934 damaged the pier “and several of the diving platforms”, so there used to be diving off or near the pier too in those days, and I guess there may have been sea baths, though I found no mention of them if there were.

They’d need those protected baths, mind, if the 1935 report of a shark-sighting is true. Even in the shallow waters under Dromana Pier, a 10-foot shark was sighted by the pier, so just remember that before you jump into the bay near the pier.

Some incidents saw people tumbling into the water involuntarily. One lady in 1944 was blown off the pier by a northerly gale and drowned. Maybe that’s why they put the fence along the southern side of the new 1950s pier? But I also wonder how she fell, since the photo in the doctors today shows a wooden fence along both sides of the pier back when it was a wooden structure.

I wonder when the old Dromana Pier was taken down? Did it begin with the massive storm that hit the bay in April 1956? Press reports then speak of “whole sections…ripped from Dromana Pier as huge waves swept over the sea wall?” And the new concrete pier seems to have been built in 1959, so that 1956 storm may well have seen off the old wooden structure.

There was drama in the bay just off Dromana Pier in 1964, when a shark-spotting plane with four people on board crashed into the water and sank. Everyone survived but the pilot, a young 22 year old, suffered a broken leg and the co-pilot head wounds. It was a busy summer Sunday on Dromana beach and pier so probably somebody reading this remembers the incident?

But as usual Trove dries up after the late 1950s, so I found nothing more recent than that to fill my stories from Dromana Pier, so if you have something to share that happened after 1964, do get in touch.

My favourite story from Dromana Pier dates from 1950. On 7 April that year, an electric storm was developing out to sea and had a dramatic effect on anyone standing on the pier at a certain point. Everyone’s hair suddenly stood on end until they passed out of the affected area. The speculation was that an electrical charge had been suspended in a low-lying layer of moist air over the pier. So, keep your hair on, if you are visiting Dromana Pier on a similar stormy day…Mrs T J Lowden is quoted as saying her hair stood on end for several seconds and when she looked around, it was happening to other people as well. The story made the front pages of newspapers as far away as Perth.

Other links and writings on Dromana Pier

Some nice pictures, especially from under the pier on Jim Worrall photographer’s blog.

The Point of Interest website has an entry on Dromana Pier with a stunning shot and some little snippets of history.

This Indigo Images shot from under Dromana Pier was short-listed for an award in 2013.

This 2013 Herald Sun article speaks of the local campaign to save Dromana Pier.

This 2018 article from the local newspaper updates on the preservation work on Dromana Pier, including that new lower platform.

What are your stories and memories of Dromana Pier?

Does anybody remember the old Dromana Pier and have some story to tell of their own experience on it?

Did anybody see the plane crash off the pier in 1964? Or any other drama to tell us from your time on the pier?

We loved Laneways Espresso, just on the main road a few minutes’ walk from the pier, and would highly recommend it for your coffee in Dromana. They do fantastic coffee, great home-baked cakes and they have a wonderful vintage vibe inside. In fact, you can buy half the furniture, and other vintage stuff on display, if it takes your fancy. We were sorely tempted…