Corinella Jetty stretches out towards French Island, where there used to be a prison: there were at least two failed attempts to escape and reach the jetty, Alcatraz-style in the past

I was glad I’d done my research before I got to Corinella Jetty. My favourite story concerned the two escape attempts over from the former prison camp on French Island. 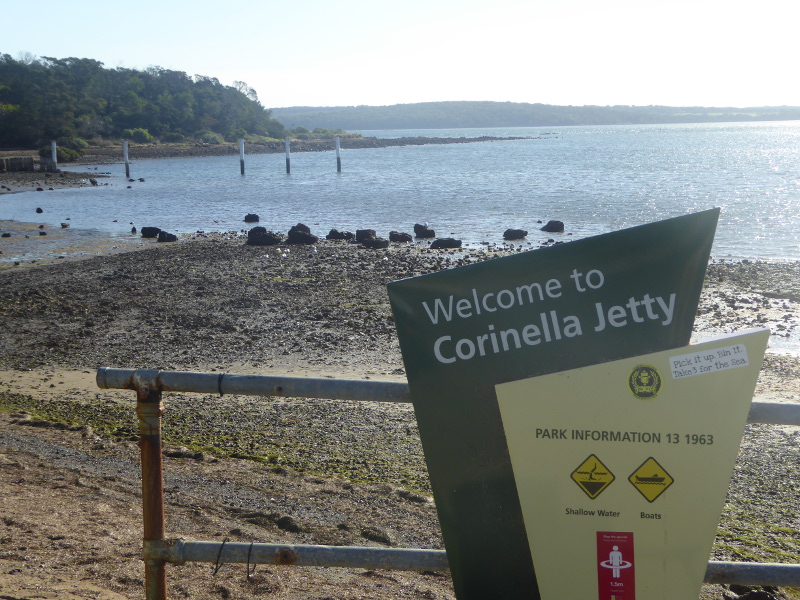 This peaceful little pier is only a few miles from the island, and MacLeod Prison was hardly Alcatraz, but this stretch of water proved too much for both sets of prisoners, so it’s not an easy passage to the mainland here. 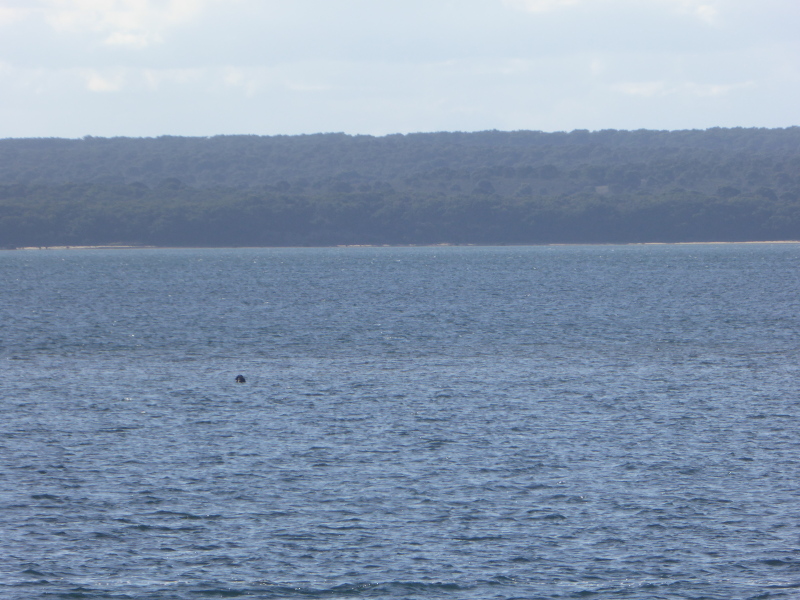 There was a handful of people fishing off the jetty when I arrived on a sunny Sunday afternoon in mid-autumn. But there were more dog-walkers than anglers on the boardwalk, so it’s clearly a popular spot to come and stretch your legs, too. 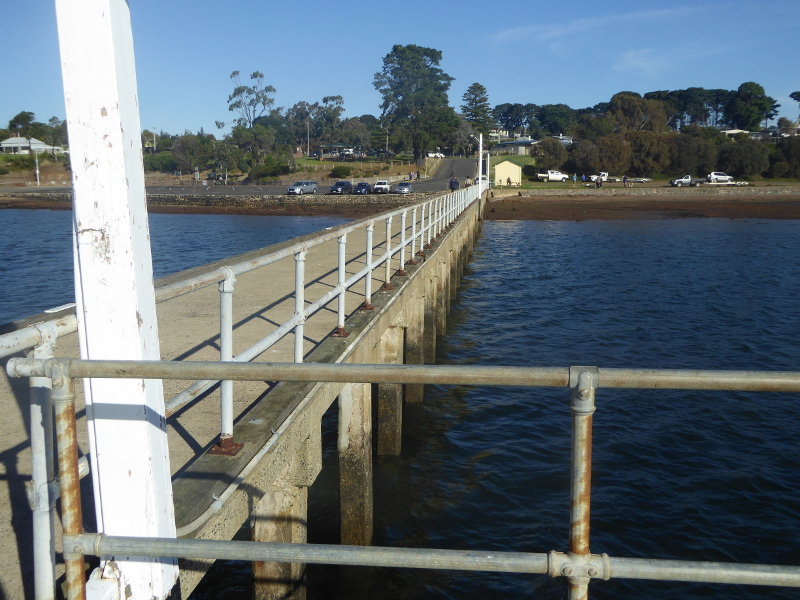 The first section of the pier is concreted over to allow (narrow) vehicle access to the end, so I wondered at first if I had wasted my time coming to Corinella, since a boardwalk is essential to my definition of a ‘real’ pier. 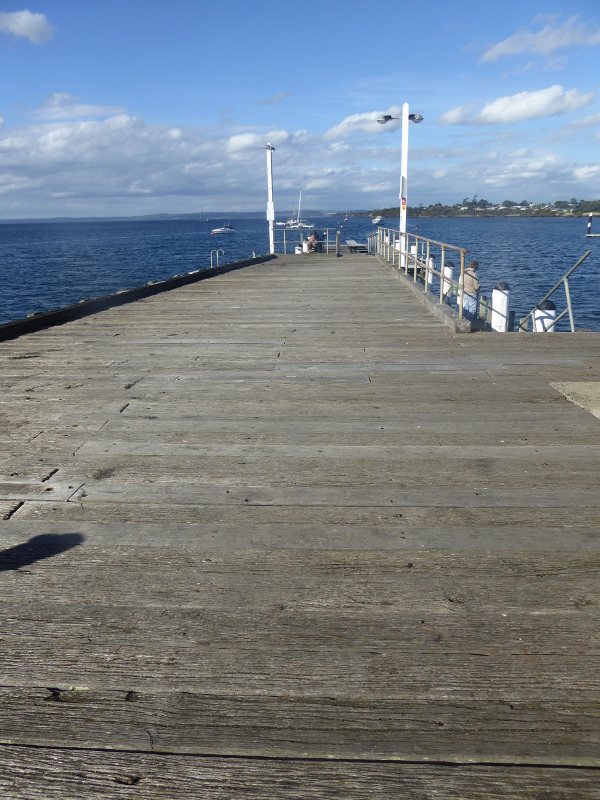 But after this 125m long section heading out towards French Island, there is a wide oblong-shaped T-section which is all planked, and has some good rickety boards to keep things interesting, too.

It’s only about 50m long this wooden section to Corinella Jetty, but that saved it for inclusion in this tour of vintage piers in Victoria. 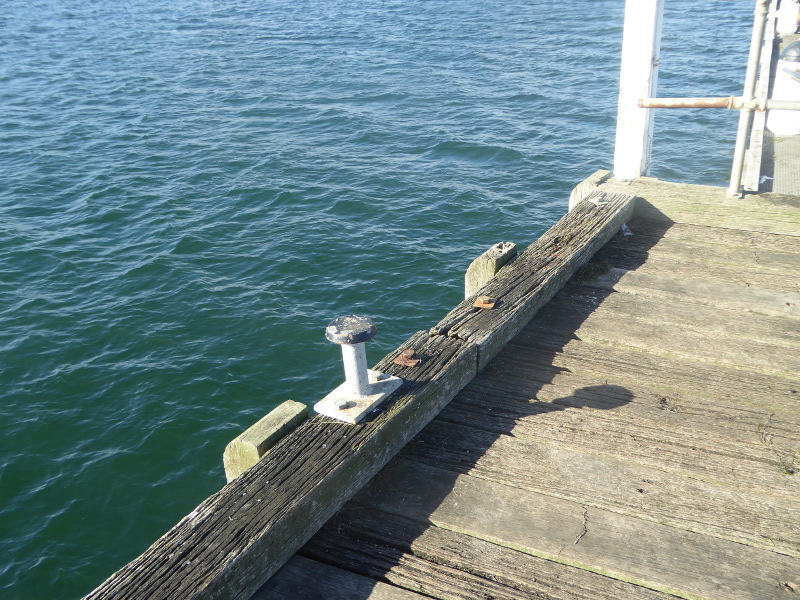 The mooring irons here suggest that only relatively small craft ever tie up on this jetty, and I’m not sure they had the regular steamers, judging from the stories I found on Trove. 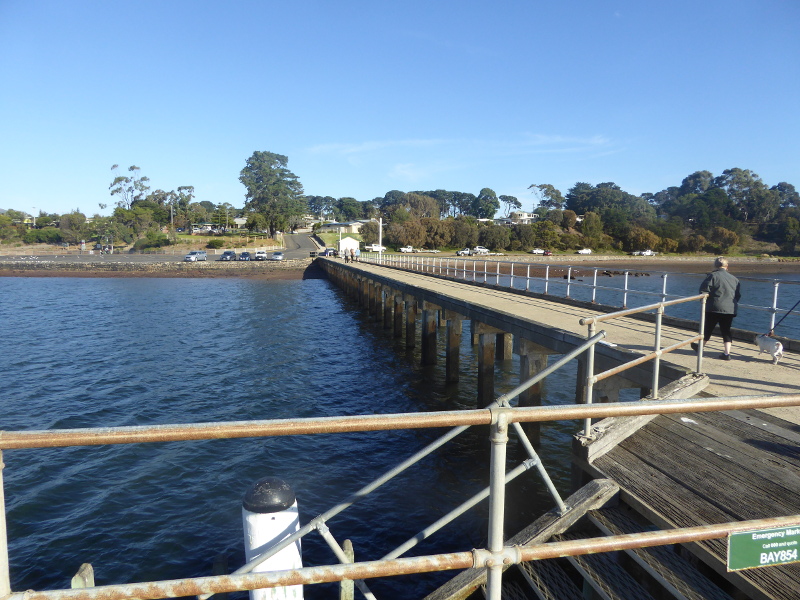 I loved the story of the big party held for the opening of the pier in 1884, but today, it was all quiet – just one rugged-looking sea salt swinging his legs and having a smoke as he sat on a bench at the shore end of the jetty.

One of the things I love about piers is how, once you get 100m or more out over the water, the breeze almost always picks up. It was strong enough to mean I needed to hold onto my hat as I walked. 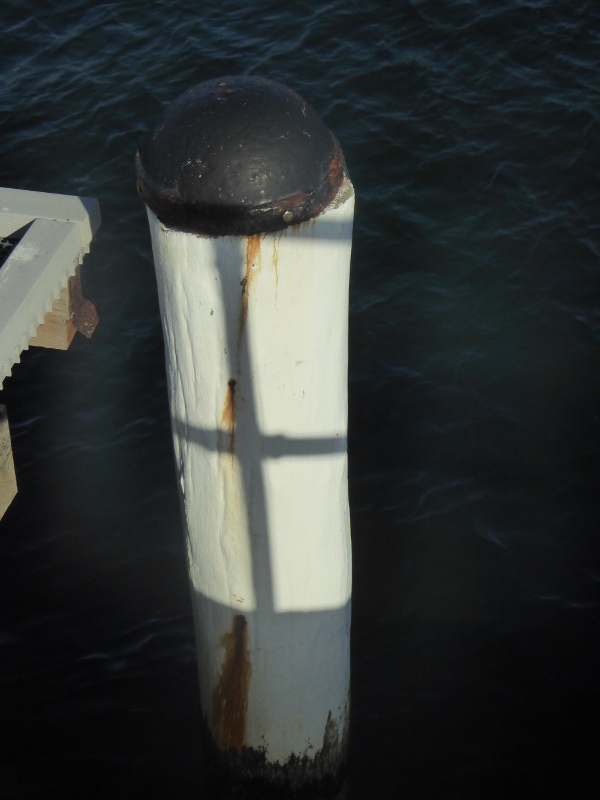 But it was all quiet on the Westernport today. No boats, no interesting wildlife on or under the pier. I guess if those escaped prisoners HAD made it across from the island, maybe nobody would have noticed them come ashore if it was always like this? 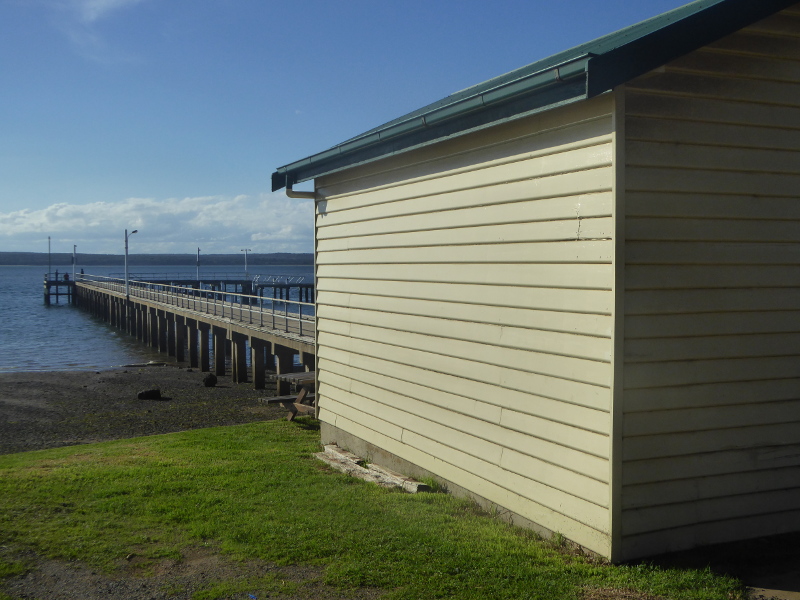 There is a weatherboard shed on the shore end of the pier, but no signage to indicate its former (or current) usage. 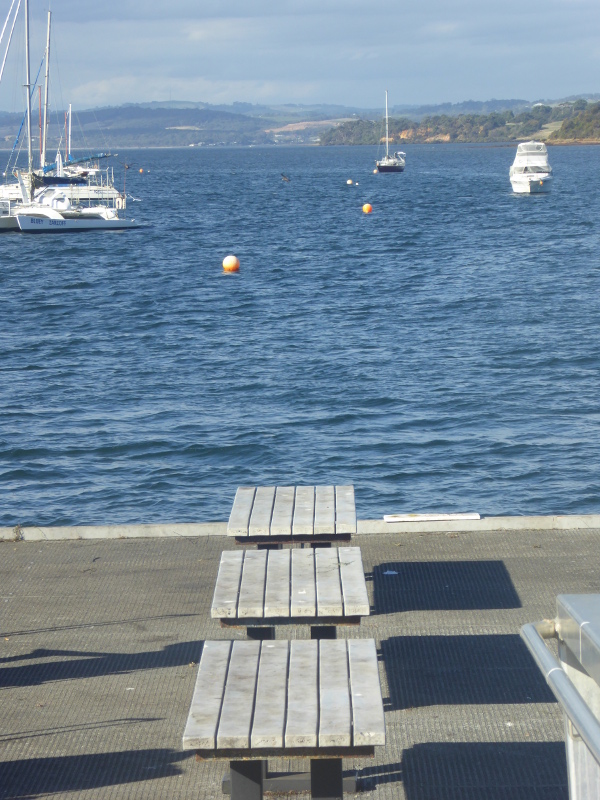 And there are benches on a modern extension to the T-section of the jetty, though all the people fishing seemed to have brought their own seats, so nobody was using those benches.

No shelter, though, if you are caught in a rain shower, or if the sun is too strong.

Nice little spot, though no sign of any businesses like cafes or shops nearby, so I’m not sure how much of a ‘destination’ is Corinella Jetty? Maybe strictly locals, so far at least…

And I do wonder if there are any Palmers still around the area, which has more of a sleepy seaside feel now than the farming community that used to be here when Palmers got themselves in the news in the Jetty’s early days. 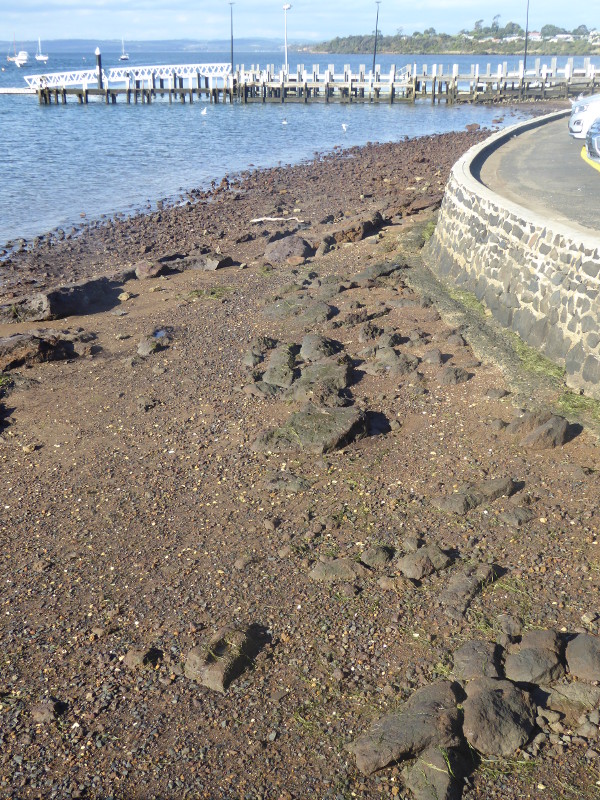 Toilets on the grassy area near the jetty.

There are benches on the jetty but no shelter.

History and stories about Corinella Jetty

9 January 1884 saw a big festival to celebrate the opening of Corinella Jetty. Steamer ferries brought people over from Hastings and Cowes. There was food, music, sports, and a ball at the end of the evening, so this was a real occasion beyond others I have seen on this tour of piers of Victoria.

Reports after the event said at least 400 attended at its peak, and that the dancing lasted through the night to daybreak!

No major incidents made the news for Corinella Jetty, though. In 1908 a farm hand who had been marking sheep on a property some miles away slashed his own calf muscles when his knife slipped. Colleagues brought him to Corinella Jetty by boat before he was shipped off to a doctor who could stitch him up.

The same farmer whose sheep were being marked in the 1908 accident lost 26 sheep overnight in 1934 when suspected stray dogs herded the sheep over the cliff and into the water. Images from a Thomas Hardy novel come to mind, but a tragedy for Farmer Palmer.

A 1925 discovery of an octopus living near one of the pier piles by a school girl named Palmer made me wonder what proportion of the Corinella population was called Palmer, since every story relating to the area seemed to involve someone of that name. Anyway, a few weeks after the octopus sighting made the papers, two seals were spotted by a correspondent near the pier – no Palmer this time, unless ‘Fair Play’ was their chosen nom de plume? But the problem was seals interfering with locals’ fishing activities.

In 1936 a flashing light was added to the end of the pier to aid navigation nearby.

1938 saw the biggest drama near Corinella Jetty, when a prisoner escaped from a jail over on French Island and tried to row across towards Corinella in a makeshift dinghy made of pinewood covered in horse rugs and lightly glued together. The dinghy fell apart and was discovered just north of the jetty but the body of the prisoner was never found, so of course he might have made it…

Clearly word got back to the prison of the escape attempt, as a dozen years later, four other prisoners were undeterred by the thought that the 1938 guy might have drowned. This group was captured, though, in the attempt. They stole a boat to make their escape across the water rather than risking what the earlier guy had attempted, but they were caught midway across and towed to Corinella Jetty, where a police car waited to take them to Melbourne police station.

Other links and writings on Corinella Jetty

I loved this 2017 YouTube video about the jetty with great stories and photos from the past.

Wendy Morriss has written a nice practical post on Corinella and its jetty.

The Visit Corinella website has fishing tips from the jetty.

And I liked this local paper story from 2014 about a fur seal ‘terrorising’ people near the jetty.

What are your stories and memories of Corinella Jetty?

Is anybody still around who remembers the escape attempts from the French Island prison facility? Maybe the 1950 one if not as far back as 1938?

Does anybody have a story to bring us up-to-date beyond the usual Trove database cut-off of the early 1950s?

Or just get in touch with a comment on your own experiences down at Corinella Jetty, or in the waters around it.