This 1903 grandstand at Coleraine Racecourse has watched over the running of Australia’s oldest steeplechase race for over 100 years.

I’d spotted Coleraine racecourse grandstand from the main road as I headed west towards Casterton a few months ago. We had planned to come for the August meeting, when the oldest steeplechase race in Australia is held every year at Coleraine, but the weather forecast that day was abysmal and we decided to postpone our trip till the September Coleraine Cup meet. 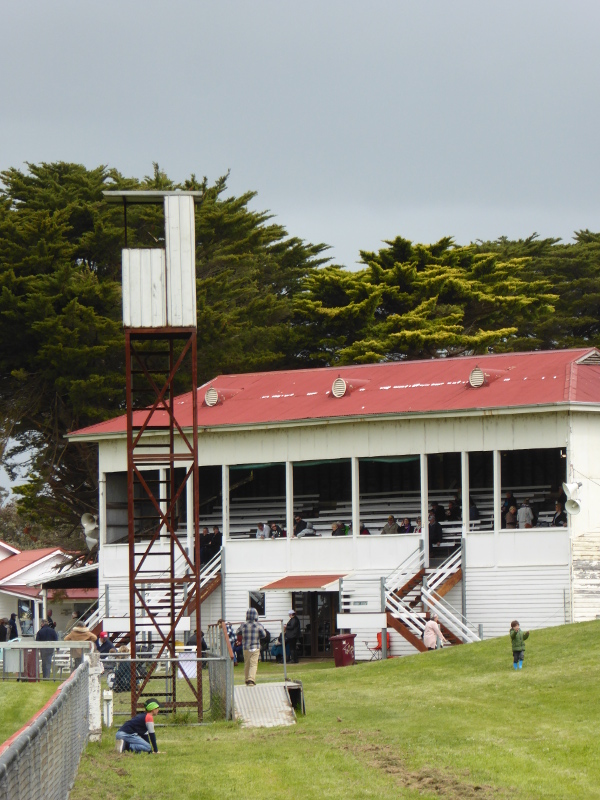 In the end, the weather was not much kinder to racegoers for this spring meeting than it had been a few weeks earlier and from about the fourth race, it was pouring down and cold. But that didn’t dampen the spirits of Coleraine racegoers: some of the younger kids even seemed to relish skipping through the rain (and puddles), while by the end, the bar area, with live music, was humming and warm, without the raucous drunkenness that often goes hand in hand with race meetings. 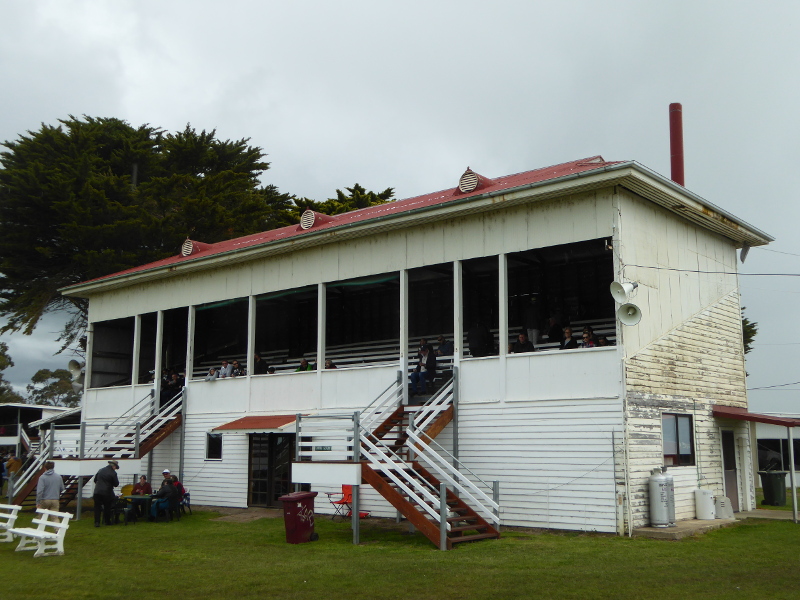 The 1903 grandstand at Coleraine is of a similar vintage to those at Camperdown and Bendigo, but Coleraine is a much smaller community than the others, and this grandstand reflects that. It has certainly had work done to maintain it through the years, but it has retained its cosy feel, even on a cold, wet day like this was. 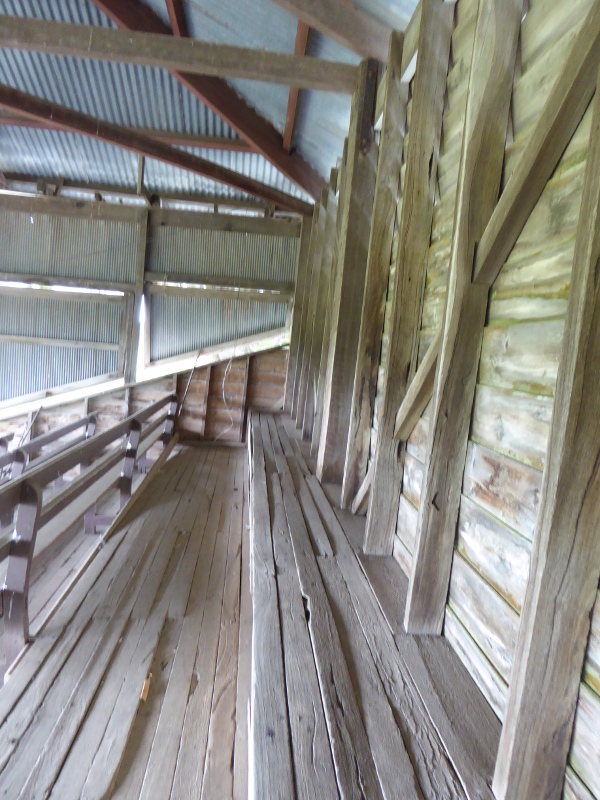 We sat up at the back on the last row of old benches, and with the wind hitting the back wall behind us, we were completely sheltered from any draughts or showers. 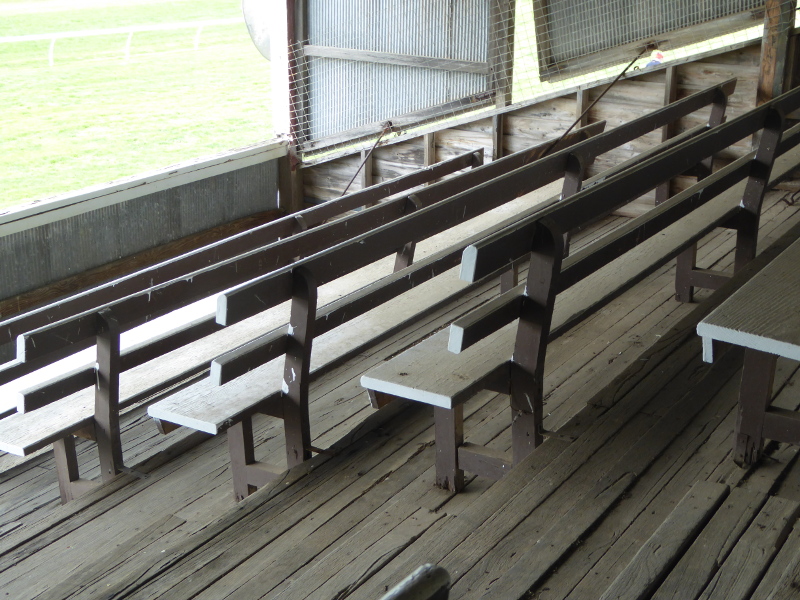 There are seven rows of benches and although never as full as this grandstand would have been in its heyday, when the rain began bucketing down and the horses were racing past, there was a decent crowd up here enjoying the shelter and the views. 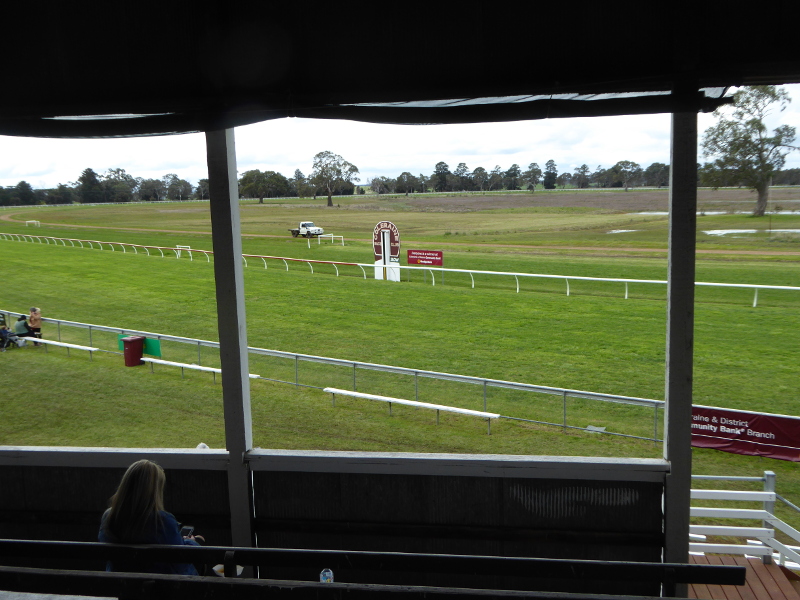 I actually liked the slapdash approach to painting these benches, with white drips and spills down the back of each bench. This is painting to my kind of standard and made me appreciate even more that this was probably a community exercise to keep the grandstand looking its best. 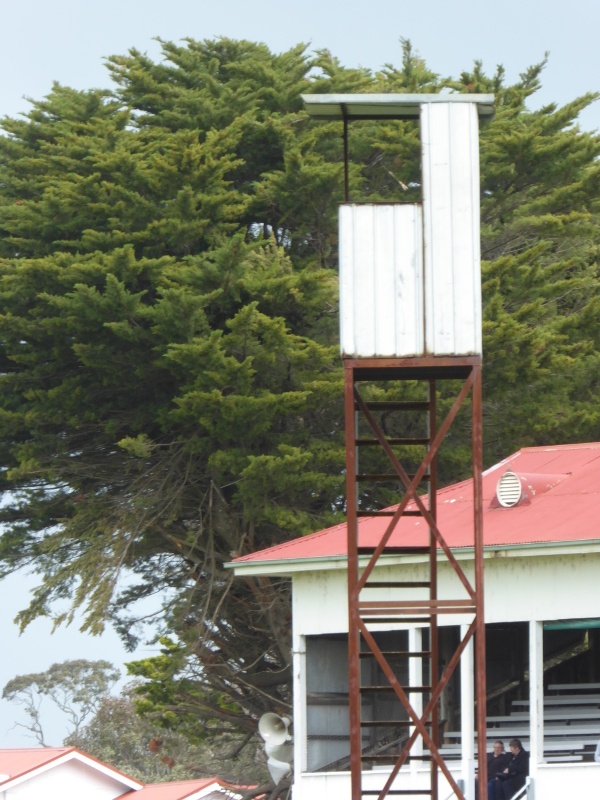 With only a couple of meetings a year, I’m amazed they manage to keep this place going at all, but I’m very glad they do, and we thoroughly enjoyed our day out here. 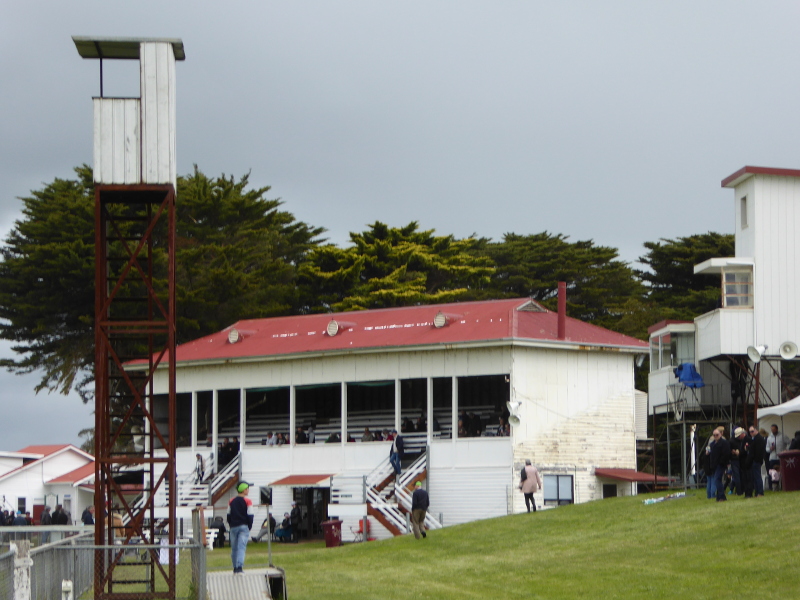 We came to Coleraine mainly for the grandstand, but actually the whole course felt nicely vintage. 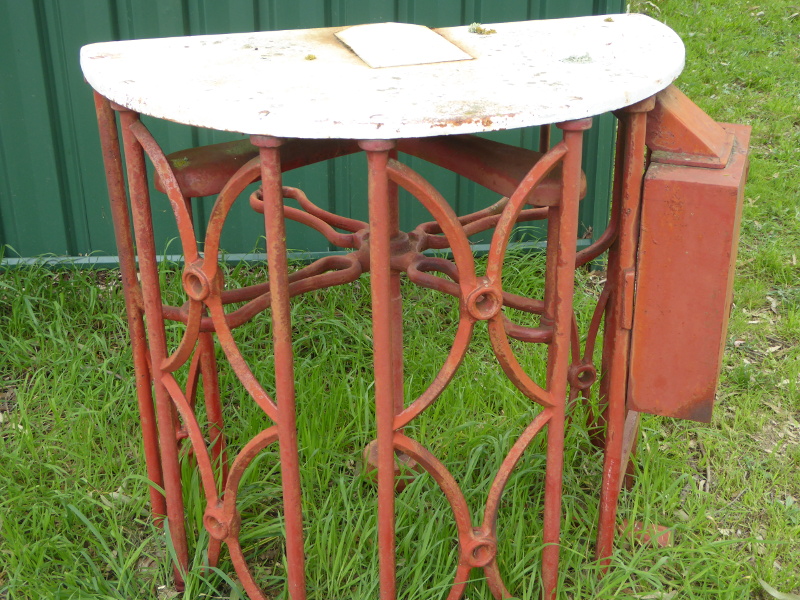 There’s an open gate these days and a lady taking the entrance fee, but these old turnstiles – made by Monteith of Melbourne – are still tucked away by what must once have been the main entrance. (And just as an aside that Monteith family caught my eye with their connections going back to Falkirk in Scotland, but ending up a short walk from where we live now in Castlemaine). 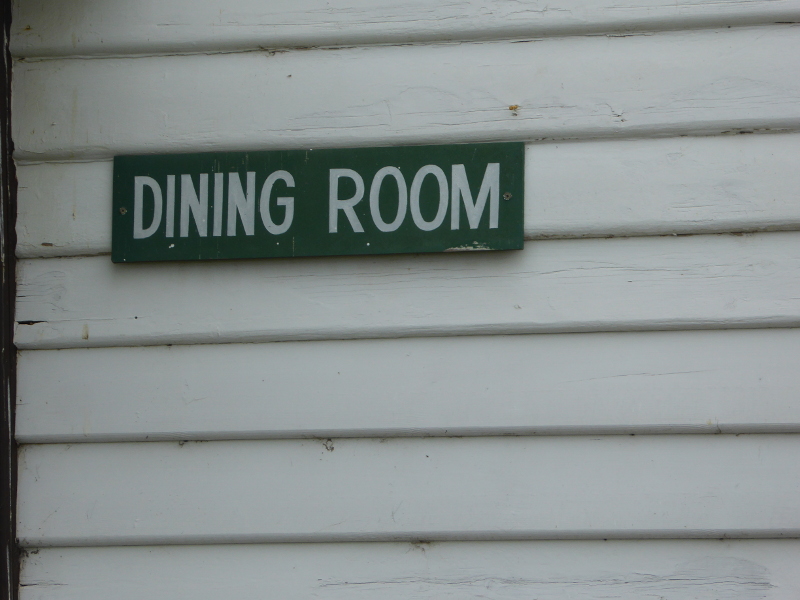 The old dining room in the belly of the grandstand is still going strong (and served up some excellent lemon meringue pie midway through the afternoon). It has the usual set of old photos on the walls, though I noticed that none of these seemed to be actually of any racing at Coleraine. I can only assume that the horses featured were locally trained or owned? The oldest one dated from a race at Mortlake in 1947 and was hidden away in a corner of the room. 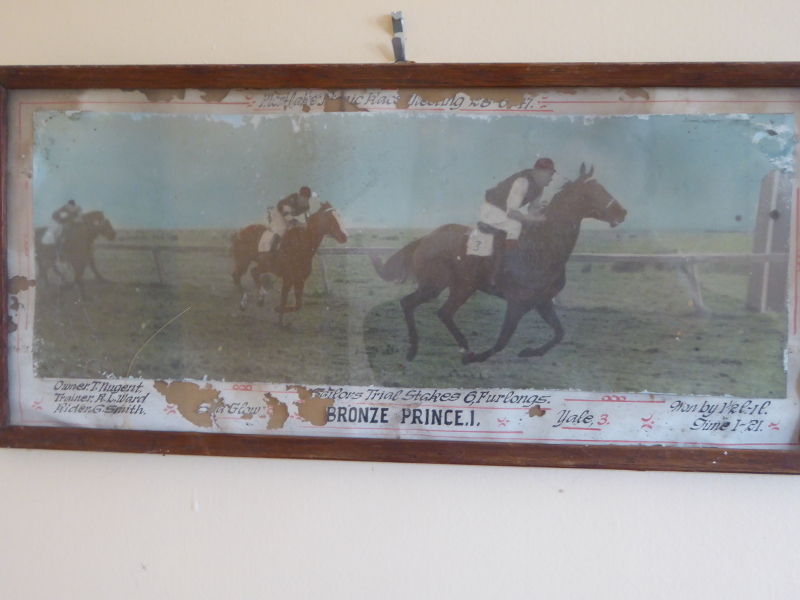 Coleraine racecourse has a fantastic set of trees dotted around the place. Big cypress trees line the way from the car park to the course, and a couple more stand majestically within the course itself, with useful benches underneath them. The trees – if not the benches – look as if they have watched over decades of punters at Coleraine. 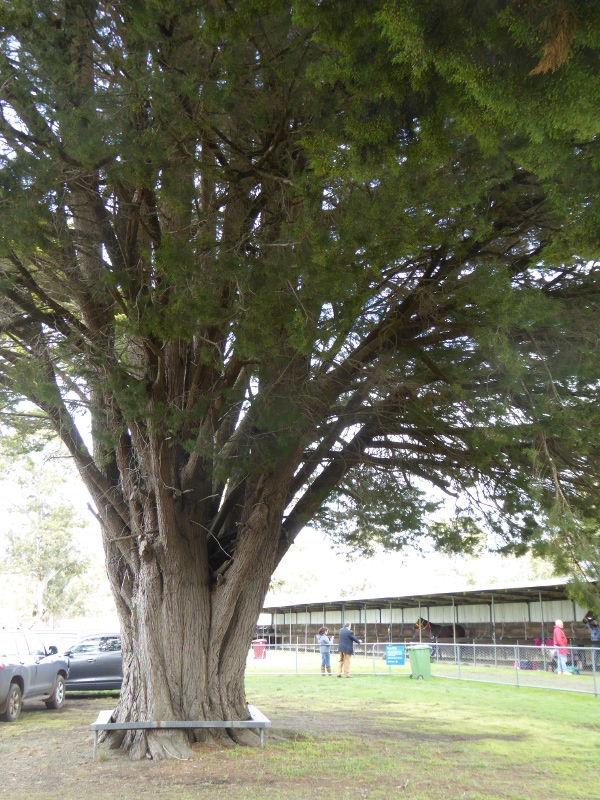 But the gum trees are also gorgeous here, with a relatively young row of them planted behind the grandstand, and some classically gnarly ones by the old entrance gate. 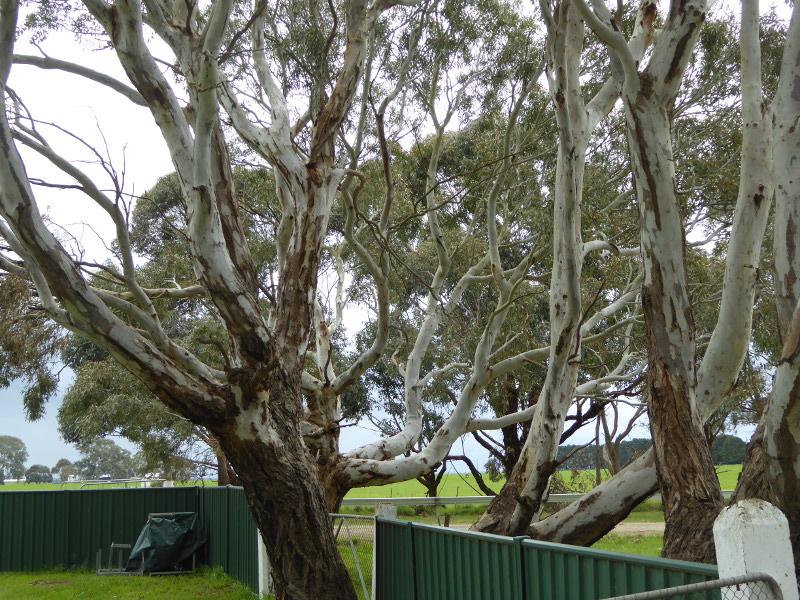 And there’s Adam Lindsay Gordon, the 19th century gentleman jockey, who was also a poet. His ‘Fields of Coleraine’ poem stands in full up by the winners’ enclosure. 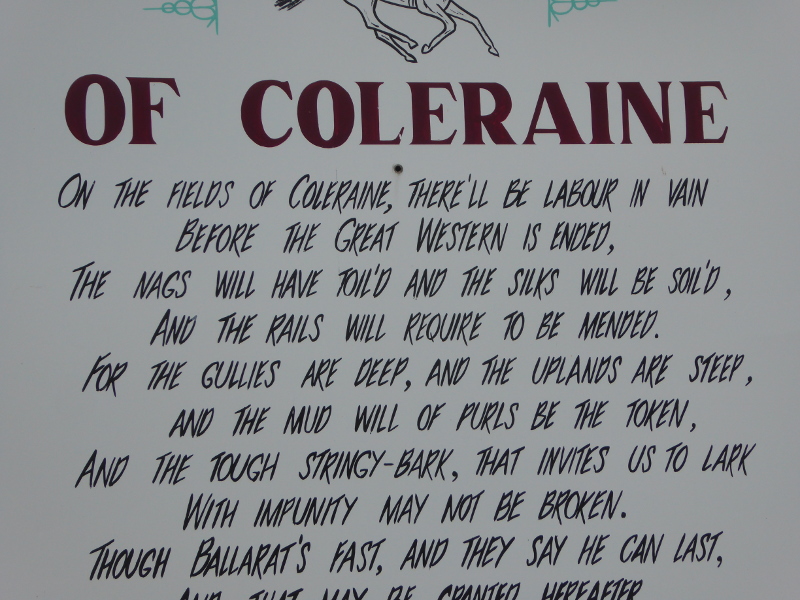 And a brief biography of Gordon is posted up in the bar, revealing what a tragic character he was, in spite of his success at Coleraine races.

That old steeplechase race used, by the way, to be held in the fields down the hill nearer to Coleraine town itself. There is a memorial to Adam Lindsay Gordon just by the main road outside town, with a mock-up of the types of fence the horses had to negotiate. That must have been quite a spectacle back in the day. 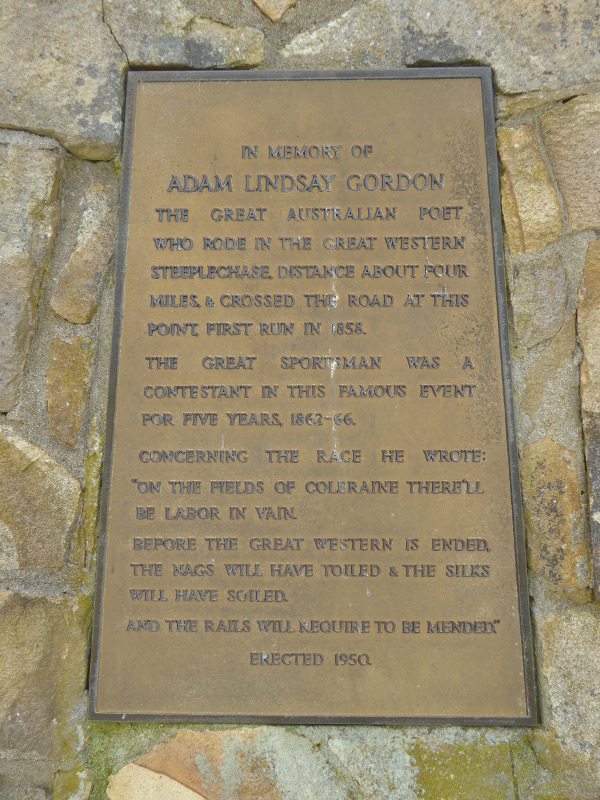 I’m not sure what the fences are like for the big race in the 21st century. The hedges are certainly not live as at Casterton, and by mid-September for the meet we attended there was no sign of any jumps on Coleraine racecourse, so they must be taken away in between those annual fixtures (all the races were on the flat in September).

Of course, there were lots of activities for the kids at Coleraine, a kiddies’ Fashion in the Fields with some amazingly young participants, and the full adult Fashion comp later on just before the big race, but we had to leave for our long drive home and this time couldn’t watch the winners of what is a tradition across Country Racing in Australia, it seems. 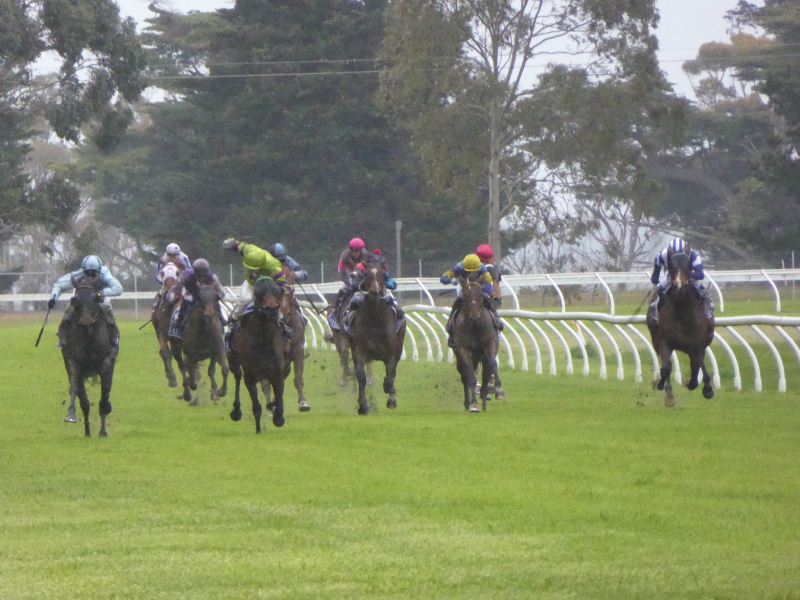 We had our usual lack of success on the horses, especially with the ground softening through the day and results becoming more and more unpredictable. But we don’t really come to these meets to make money. We come for the vintage grandstands, and Coleraine makes a great entry for this section of the site. 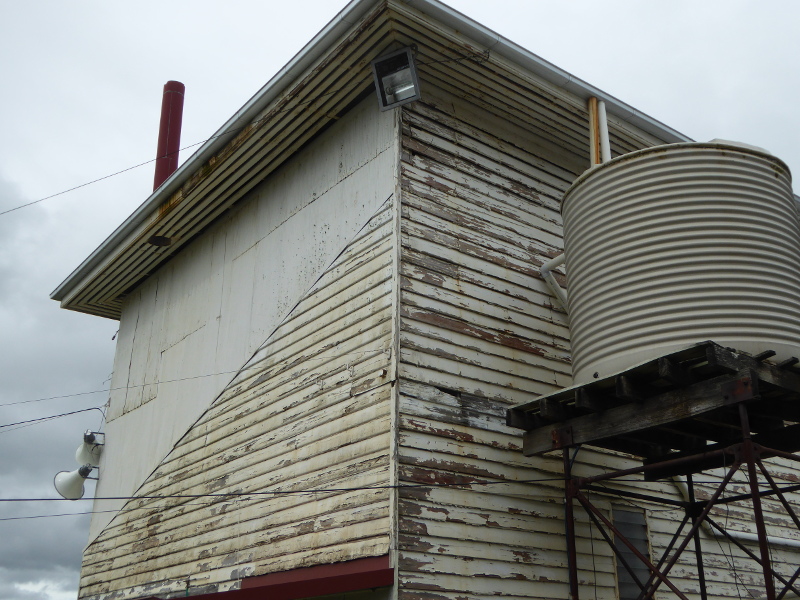 I might just offer to chip in if they need help to give their grandstand a new lick of paint before next year’s meets, though…

Course is 3kms from the town, just off the Glenelg Highway to the left if you are driving towards South Australia.

History and stories from Coleraine racecourse

An early press quote from the 1860s spoke of Coleraine Races as the place to be: every man and his wife would be going, said the newspaper, unless the weather put a stop to things. Sadly, that’s what happened to us when our alarm went off early on the day of the Great Western Steeplechase in 2019. The weather forecast for the day was appalling, so we turned over and went back to sleep, missing out on seeing the oldest steeplechase horse race in Australia – a real shame to miss it.

It’s the grandstand we came for and it is a striking sight from the main road. But there was no great fanfare for its opening in 1903. The Hamilton Spectator of 16 April 1903 spoke of the ‘commodious grandstand’ that had been built in the last 12 months as part of a series of racecourse improvements. But other than that, there were only brief mentions for what was described as “one of the best (grandstands) to be seen on any country course”.

The architectural designs for the grandstand were by a member of the Heidelberg Cricket Club, one Hurtle A. Scown. A google search for Mr Scown found that he died in 1956, but his designs didn’t seem to make headlines anywhere else, unless someone knows more about him? The actual building of the grandstand was credited to a Henry James (not the novelist, presumably) and was designed to seat 400 spectators.

The grandstand served as a wool store during the Second World War and needed some renovation and remodelling after the war, so I’m not sure how much of the original structure remains today.

Unlike most buildings reviewed for Vintage Victoria, the Coleraine Racecourse Grandstand didn’t seem to be the venue for many exceptional incidents, if my search through Trove is accurate.

There were the usual occasional petty thefts, at the racecourse, some slightly odd, like the man who stole two rugs from buggies parked by the course (feeling the cold, maybe?); and there was the case of the man convicted of running a gambling con with cards called French Monte.

But on the whole the Coleraine races seem to have been fairly disaster-free, with just the occasional celebrity attending. I can’t help wondering for example if the beauty guru Helena Rubinstein attended the races here while she was residing in Coleraine. She’d have been in town the year the grandstand opened, but back in 1903 she probably hadn’t made a name for herself as the maker of fine skin creams (though her story is extraordinary, and you can see how this Polish emigre learnt her trade from the sheep station run by her uncle near here – all that lanolin helping her customers stay young!).

The press have had a mixed relationship with the course in the past, it seems. There was consternation among journalists forced to decamp from what had been the ‘press room’ in 1947 when that was converted into an extra bar; they had to share with the stewards instead and were most put out at having to interrupt their reporting each time the stewards wanted to meet. And back in 1939 the press were in the forefront of a (successful) campaign to have the Tote (TAB today) introduced at Coleraine racecourse.

And there was the day in 1940 when a race was cancelled because there were no entrants. The field was supposed to be 4 horses but three were scratched on the day and the fourth was disqualified without even being allowed a walkover because his trainer was found not have a valid licence. Ah the problems of country racing back in the day…But you can see how Coleraine still holds onto its illustrious past when Australian poet and horseman Adam Lindsay Gordon used to ride here.

I would love to have discovered that Coleraine resident Helena Rubinstein had a link to Coleraine Racecourse, but I could find nothing that showed conclusively she attended a meeting here. 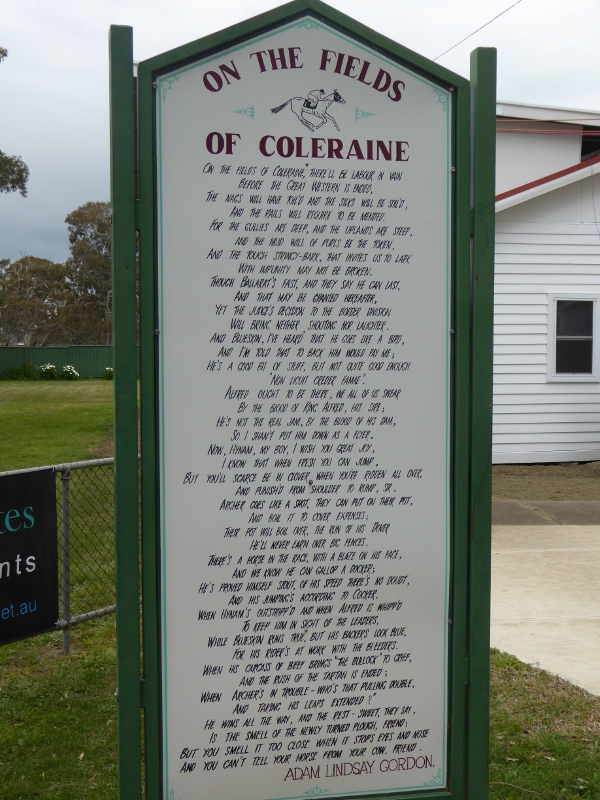 But head into the bar at the back of the stand to read a succinct summary of the man’s life. It all sounded rather tragic, apart from his heroic endeavours on the racecourse, as he had mountains of debt later in life and ended up committing suicide at the age of just 36 in 1870.

What are your experiences and stories from a day at Coleraine Races?

Anybody got nice memories of days out at Coleraine races? Have you watched the Great Western Steeplechase and has it changed much over the decades?

Has the grandstand changed; can anyone remember it being a wool store during the war?

Any other stories from your own days out at Coleraine Races, just leave them in the box below and we can add them to the post.

Other links and writings on Coleraine racecourse

This 2007 article from Thoroughbred News has some nice words to say about racing at Coleraine.

Coffee before the off or to drown your losses?

We didn’t manage to find any decent coffee or tea in Coleraine itself; the only good looking coffee shops in town were closed, which seemed an odd choice on Cup day, but I guess their thinking was that everyone goes to the racecourse instead. Coffee on the course was OK off one of those trucks.