Nellie Melba loved the roses in Colac Botanic Gardens, but I wonder what she’d make of the flying foxes which rule the roost above large sections of the Gardens today.

The flying foxes were our favourite thing about Colac Botanical Gardens, though I gather we risk the ire of half the local population by saying that, as they have become a bit of a pest, especially for the gardeners here, who don’t want to see so many trees stripped not only of foliage but of any fruit they might bear. 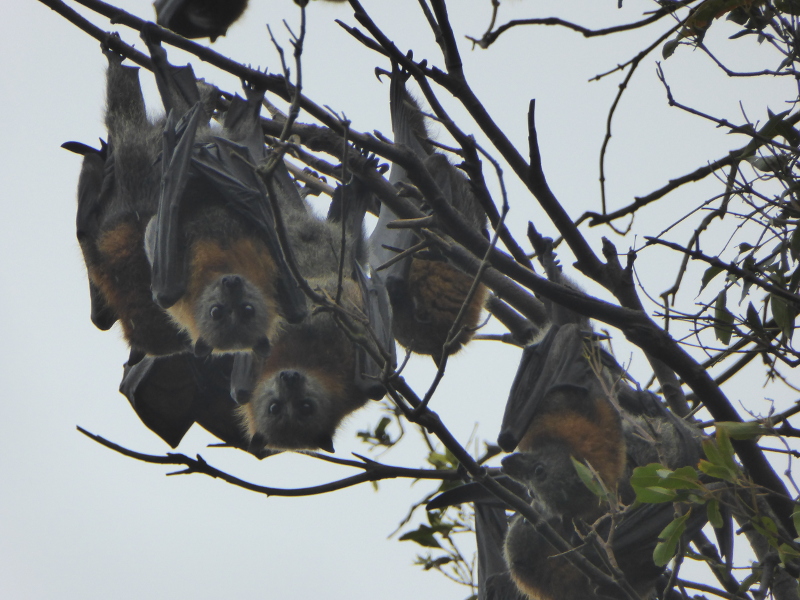 When we first entered the Gardens at the western end off Gellibrand Street there was no sign of what was to come (except for the warning signs on the gate). 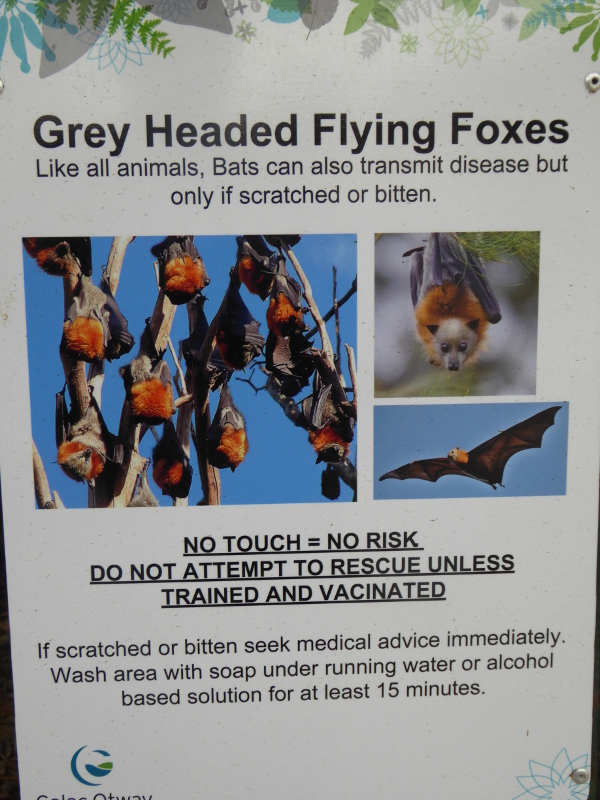 We actually loved Colac Botanic Gardens right from that very first moment. They are extraordinarily tranquil, perched up the slope looking over the lake. There was one family with raucous kids running through the place, but apart from that on this holiday morning it was dead quiet. 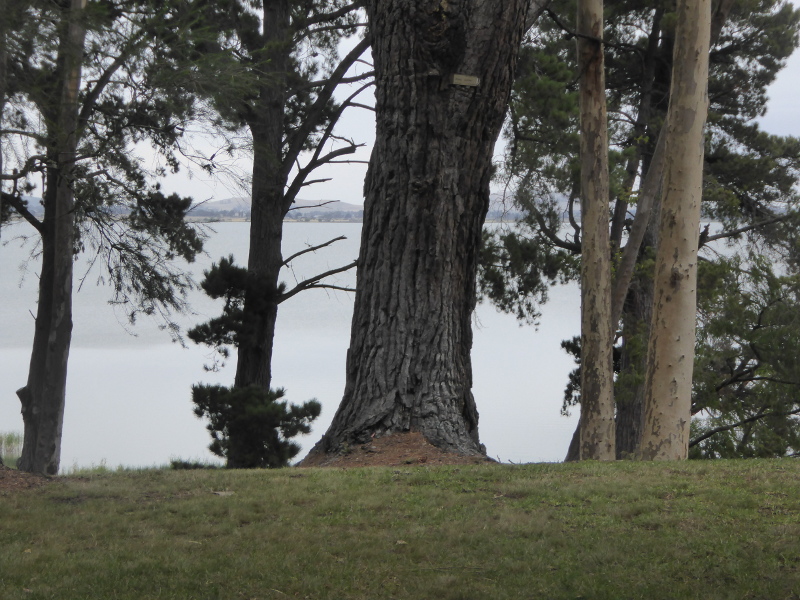 I assume the weatherboard cottage just to the left as we entered must have once been the curator’s cottage; it was closed on this public holiday but it looked as if it is used for possibly a café and some community groups now. 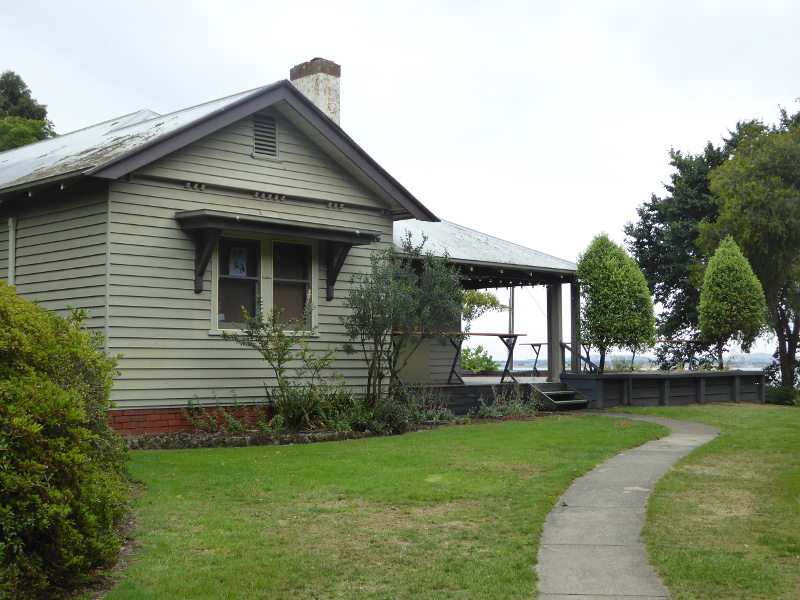 It’s hard to know exactly how the original botanical gardens panned out on the edge of the lake. The old bandstand still stands quite low down the slope; and I’m guessing the athletics events once held might have been along the flat there by the lake? 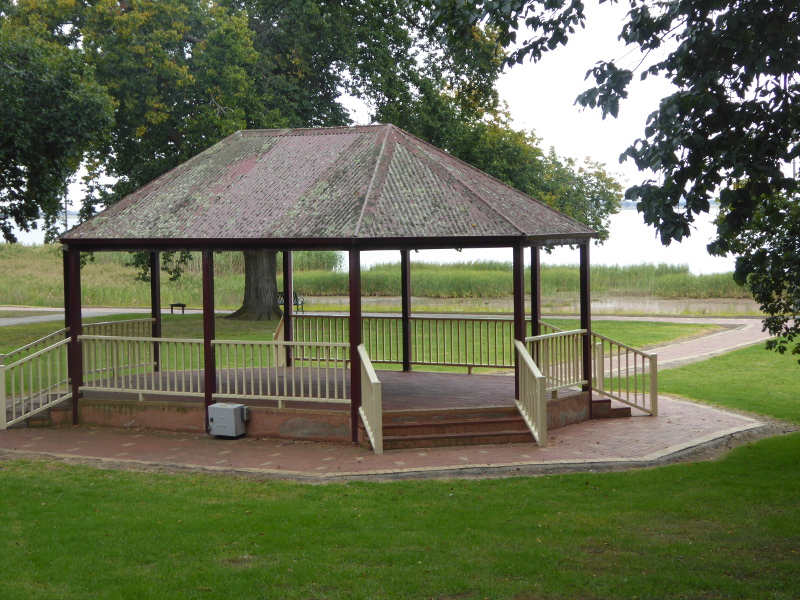 The Colac City Band appears to rehearse still in this vintage building down there, too. 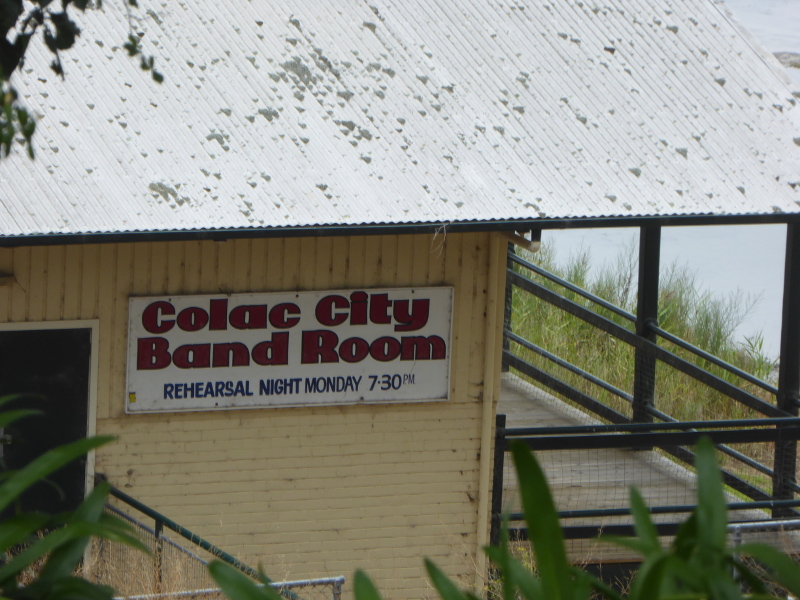 Even the old toilet block has some vintage charm to it, though the plumbing has all been taken out now and this is just a brick block, with the tell-tale ‘stink pipe’ sticking up a few metres into the air. 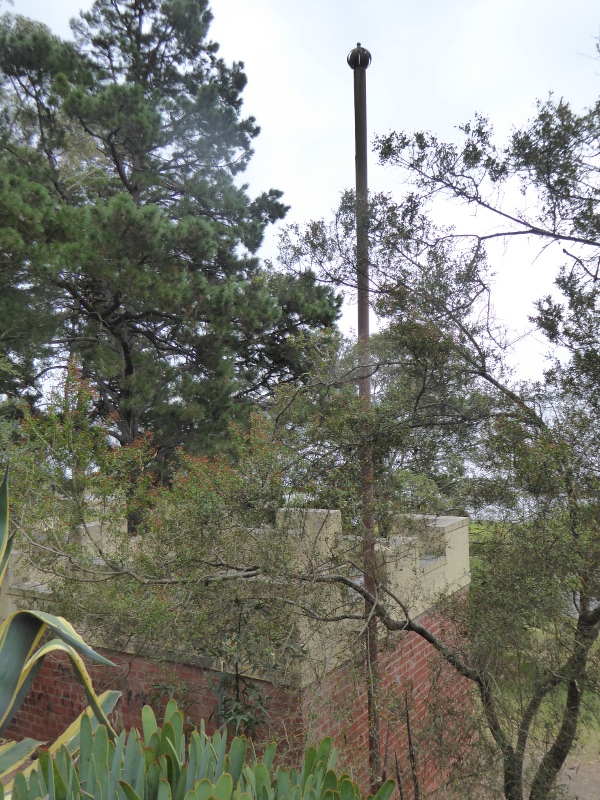 We followed the path on the higher level; it is also a cinder roadway really and the odd car trundled past us, but the overall feel was still of total serenity.

And then we heard the murmur at first, getting louder as we moved further along, and becoming a chorus of shrieks as the first of the flying foxes came into view. 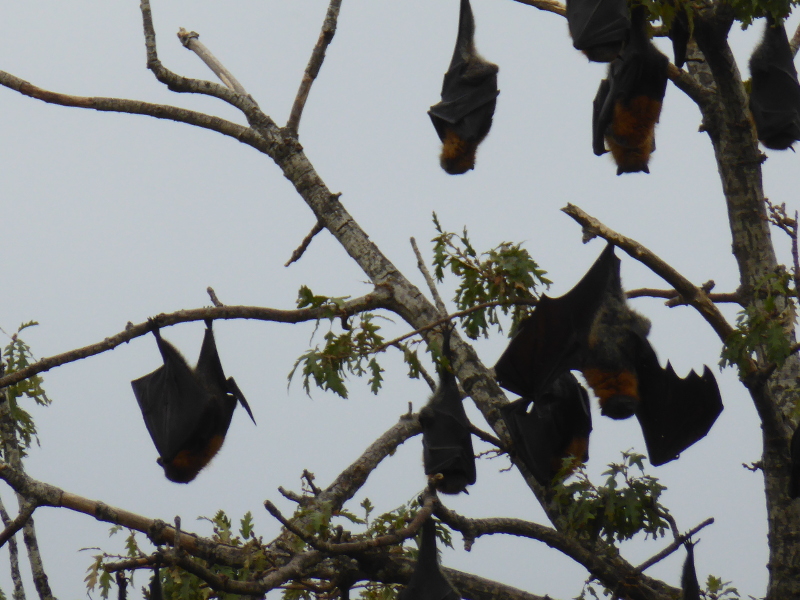 Down that eastern end of the Gardens, every tree is teeming with these extraordinary beasts, who hang there resting, before taking turns to swirl silently round the block and then screeching as they land once again upside down in some high up branch.

We watched them for ages. Some seemed to be keeping an eye on us, too.

A lady from Colac library preparing the next day’s school ‘bear hunt’ round the Gardens chatted briefly with us, and revealed how the community is divided over whether the bats are welcome or not. Certainly, she remarked that their numbers had increased dramatically just in the last two weeks, and may number up to 10,000 now (early March 2021). 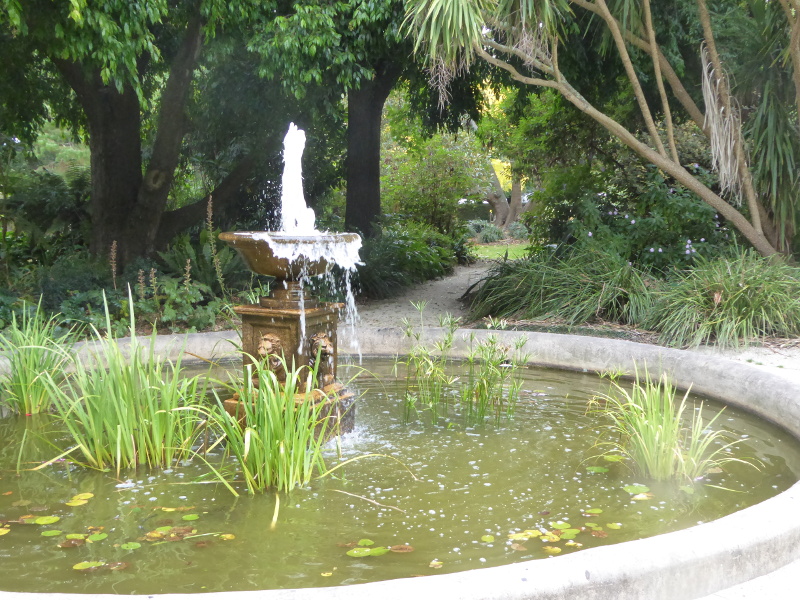 The pond with its attractive fountain sits right in the middle of the area the flying foxes frequent. 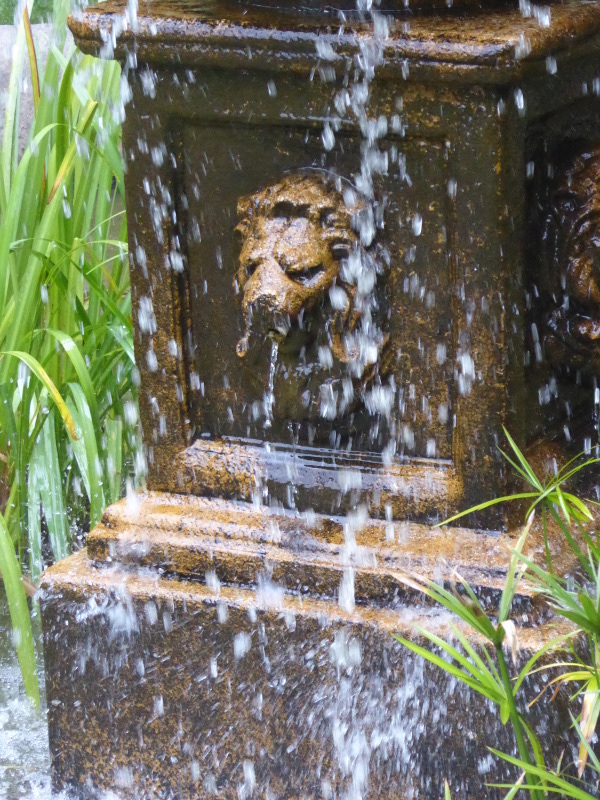 We liked the spouting lion motif on this fountain (though no idea if it is vintage or a more modern version). I did find the tender for the construction of the lily pond, which dates from around 1910, but I’m not sure how old the fountain is. 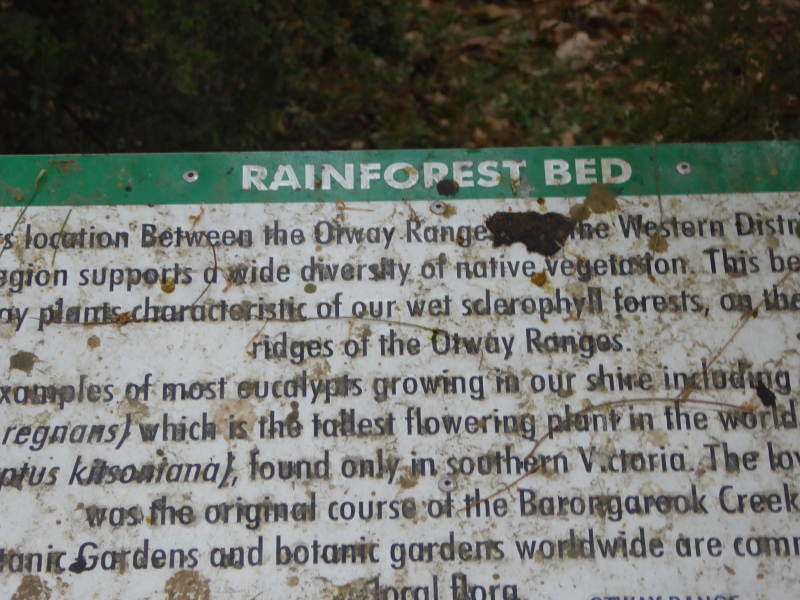 Round the back, looking over to Barongarook Creek, there is a small area of rain forest, which seemed rather extraordinary to us so far south. 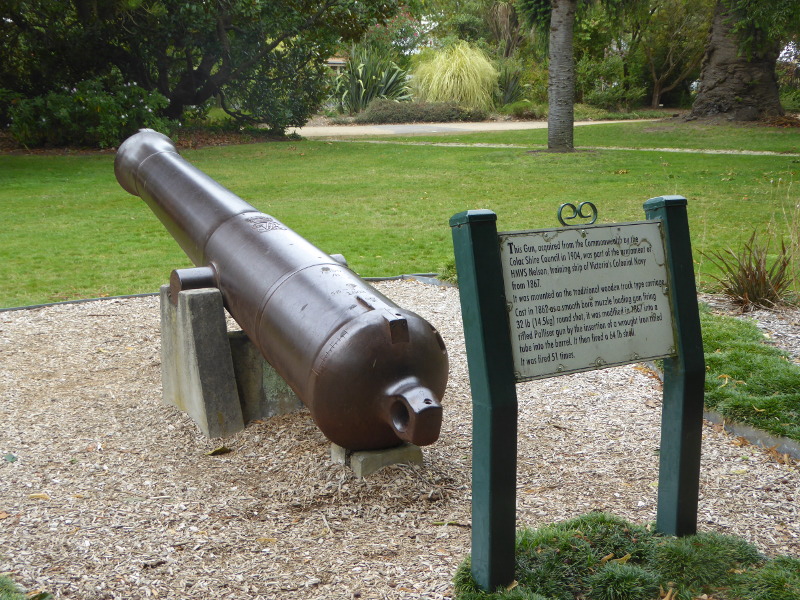 And then the usual random piece of old wartime weaponry on display, with this cannon from an Australian Navy vessel, forged in 1862 and placed in the Gardens in 1904, being fired 51 times in its active life.. 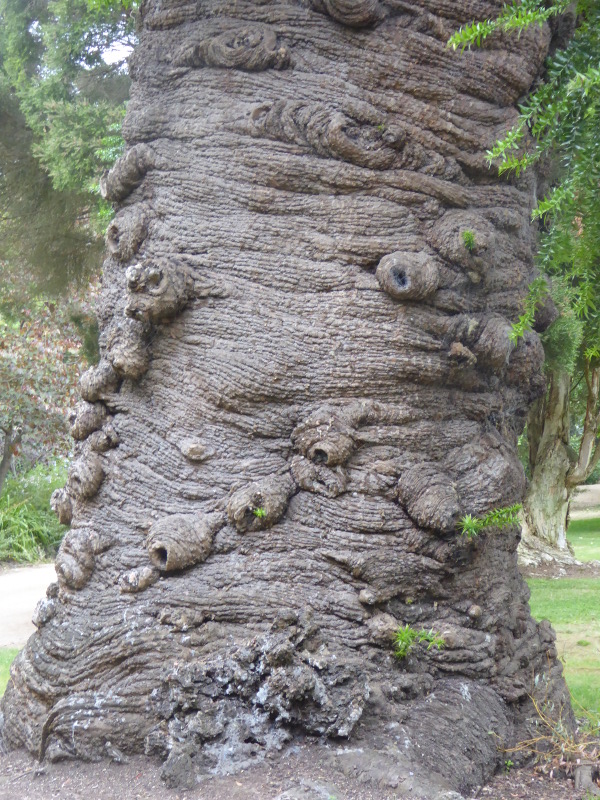 There were beautiful ancient trees, with ent-like trunks. 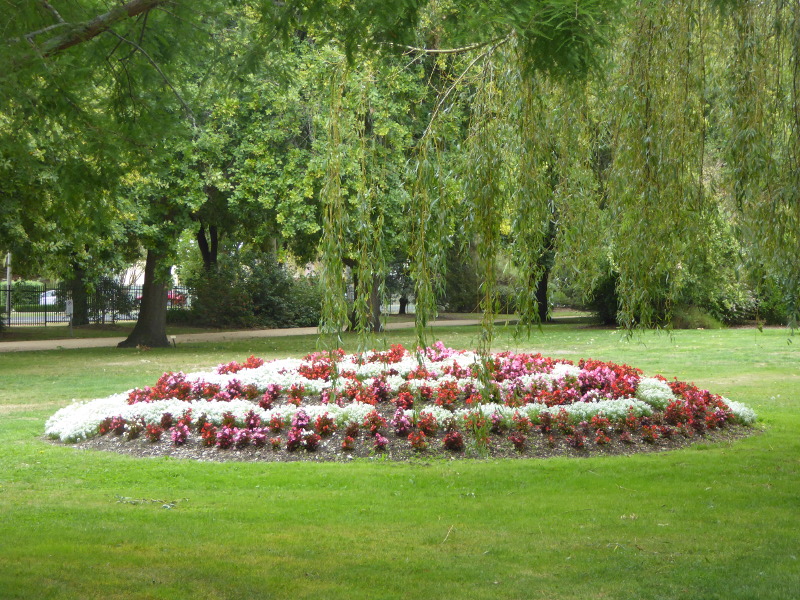 And some lovely flower beds. 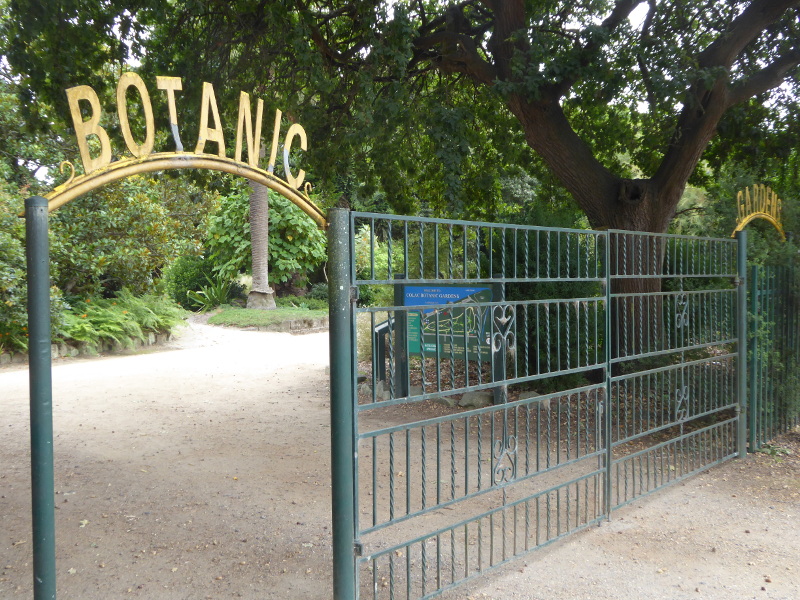 And finally, as we walked along Fyans Street, we spotted what must once have been the main entrance to the gardens. The ironwork is slightly less elaborate than on some botanic gardens in Victoria, but still attractive, and this vintage gold lettering to mark the Botanic nature of the place is surely much more striking than the more modern Welcome signs put up today… 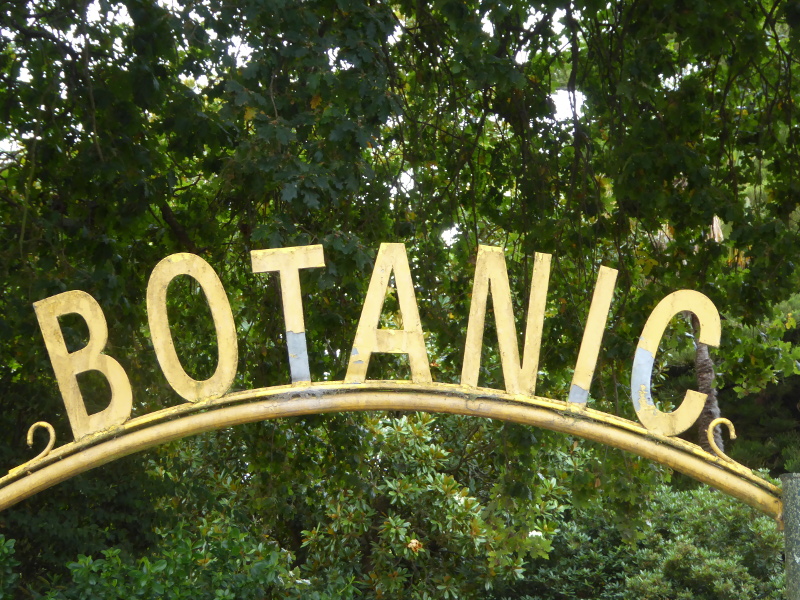 Colac Botanical Gardens have to be one of our favourite gardens in Victoria so far, and we have almost visited half of them now… 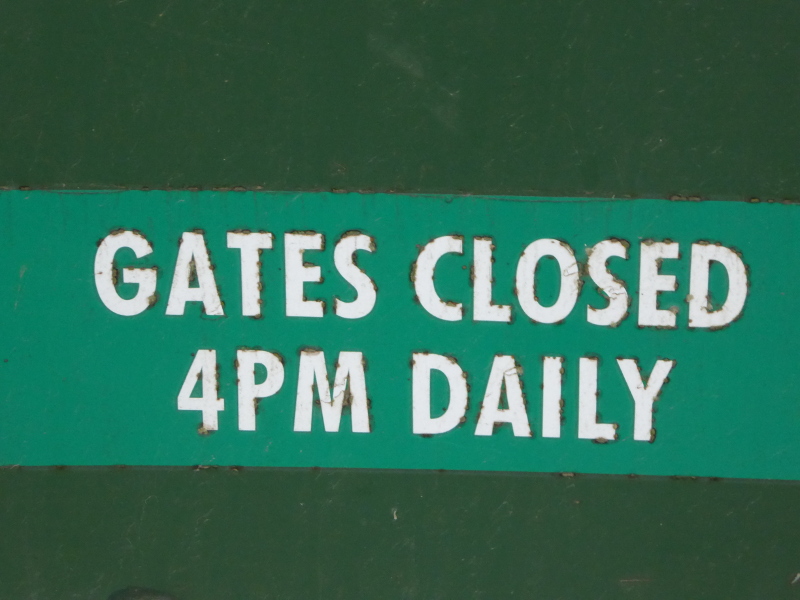 The land was set aside for the Gardens in 1865, and gradually planted or landscaped over the subsequent years, but ten years later the local council was struggling to maintain them, and the Government wouldn’t go above the L15 set aside from state funds for Colac’s Gardens. Some local councillors warned the gardens may have to close…

In the early years, funds were short, so the Gardens needed donations such as the 500 bricks from one benefactor to help build a frame for plants to survive the cold winters; and another donation of the timber needed to build a cottage for the curator.

In December 1875 a major revamp of the gardens got underway, including reclaiming acres of swamp by the lake. The roads through the gardens were of course called ‘carriageways’, as it would all have been horse-drawn at that stage.

The aim was to make Colac Botanical Gardens the prettiest in the colony, such that ‘no traveller through the western district would fail to visit.’ And visitors would be plenty once the railway line was built to what the Geelong Advertiser called the ‘future metropolis of Victoria,’ and they meant Geelong…

The Colac Herald of 27 November 1883 summed up why the Botanic Gardens are such a special place: “The pale blue waters of the lake appear through the trees, and the refreshing breeze which blows almost unintermittently across the lake, makes the gardens a place of favourite resort during the long summer evenings.”

Flying foxes might be the biggest wildlife worry for the gardeners in 2021, but back in the 1880s, it was rabbits who found a way through the garden fences to damage countless plants. There were reportedly hundreds of them.

In 1894, meanwhile, it was reported that a Father Nelan had brought six blackbirds (both sexes!) to Colac Botanic Gardens from Ballarat and there was a request “that the young people would not molest or disturb them in any way…”

April 1896 saw the bandstand in use in a fund-raising concert to help the victims of New Zealand’s worst ever mining disaster, when 65 people died (Brunnerton Colliery was the site of the tragic fire). The Colac Premier Band played.

By 1903, the Gardens seemed to be getting a bit run down, and there were complaints of tramps sleeping in the pavilion building. Later that year, the Gardens Committee called on the long-standing curator, Mr McDonald, to stand down and give way to a more energetic younger man. This provoked a reaction from McDonald in the letters pages of the Colac Herald, as he defended his experience and skills, though I noted that all his examples dated from 10 or more years earlier. Perhaps the Council were asking too much of an older man; perhaps he was resting on past laurels? Hard to know 118 years later.

In 1905 Councillor Baker called for the cannon in the Botanical Gardens to be moved to a far more prominent position at the top of the slope looking down over the lake. Looks like he didn’t win that one. No mention then, though, of what exactly the cannon was commemorating.

Famous visitors to the gardens just over 100 years ago included Nellie Melba, and Lady Northcote, the wife of the Governor-General at the time, but also well-known in her own right as a promoter of the arts and in particular women’s contribution to that area of society. Both gave grants for the upkeep of the gardens, and Nellie Melba had a rose bed installed in her name; when she arrived by train in Melbourne some time later, the then curator of the gardens arranged for a bouquet of ‘Melba roses’ to be handed to her at Spencer Street station.

Annual regatta New Year’s Day: best views from the Gardens. The regatta was still going just before the second world war (though it had its request for a liquor licence turned down in 1937 – no boozing on boats, clearly…). I wonder when the last regatta was held on the Lake?

Youthful, unruly behaviour, damaging plants, insulting abuse hurled at passers-by and even the occasional robbery. A 1920 article suggested this was still happening, and another in 1934

complained of vandalism on buildings in the gardens. So, it wasn’t all cheerful scouts or guides picnicking in the grounds in those inter-war years.

There was a proposal for a swimming pool to be built near where the creek meets the lake, but I found no record of it after that, so am wondering if it was ever built, and if so, how long it survived?

In February 1937 a big ‘Home to Colac’ celebration was organised to mark the centenary of settlement in the district. All residents past and present were invited back to the town to celebrate. There was a big torchlight procession into the Botanic Gardens. Kids led the march pushing prams, go-carts and scooters; the local brass band led the adults in, with floats from local schools, tradies and community groups. The march was finished with the area’s oldest bullock driver, one Mr Rippon, bringing his team of bullocks into town from the Manifold estate in Camperdown. Mr Rippon had been caring for bullocks in the area for 60 years, so since 1877.

In 1953, disaster struck at the Colac Botanical Gardens.

In January a fire in the early hours, saw the boat sheds on the lake destroyed, with fire engines hurtling through the gardens to reach the lake side.

But then in March of that year an explosion ripped through the pavilion in the Botanic Gardens, and blew apart the band rotunda. Police linked the explosion to the theft of gelignite from a local quarry some weeks earlier. But the Trove press database gave no clue as to whether they ever found out who was responsible or what happened to them if any ‘teenagers’ were identified. I guess these youngsters in 1953 might be octogenarians now. Are any of them still with us to recall the incidents? Or can anyone fill us in on the outcome of the case?

What are your experiences at Colac Botanic Gardens?

Does anybody know if they ever found out who was responsible for the explosions that shook the Gardens in 1953? Does anyone remember the incident?

Can anyone tell me when was the last regatta on the lake at Colac?

Has anyone got any stories about things that happened in or around Colac Botanic Gardens to bring my history section beyond my last story from the Trove database (1953)?

Or does anyone just have a good memory about a visit to Colac Botanical Gardens that they’d like to share here, even from the last few months or years?

Other links and writings on the Colac Botanical Gardens

This Atlas Obscura article from April 2021 dates from just after our own visit to Colac. It sheds more light on the strength of feelings locally on those flying foxes…

The Melbourne Playgrounds website has a piece on the Colac Botanic Gardens.

There’s an entry in the Victorian Heritage Database on the botanic gardens in Colac.

And this YouTube video takes you on a brief tour of the Gardens – from November 2020 – more focus on flowers than vintage matters, but Nellie Melba would be pleased to see the roses doing so well…