From shipwrecks to light planes plunging into the sea, Cape Liptrap Lighthouse has seen a lot going on since the first light was installed – unmanned – in 1913. The current light dates from 1951.

You won’t find any old keeper’s cottages near Cape Liptrap Lighthouse, nor any other outbuildings or walled gardens that would help lighthouse staff survive the exposure and isolation. That’s because the lighthouse here was Victoria’s first ever fully automated light, and although the current structure is a 1950s model, even the original in 1913 never needed anybody on hand to keep the lights burning. 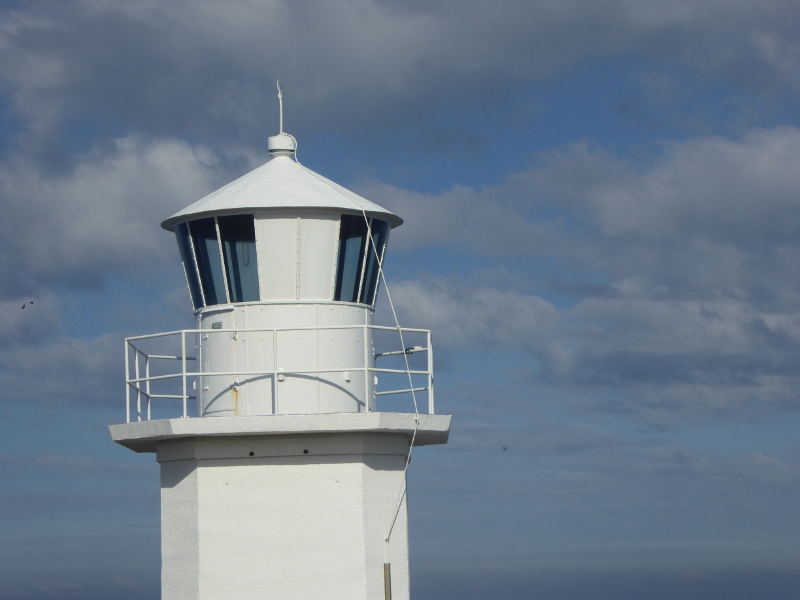 It’s a pretty isolated spot, mind. There’s an 8km drive along unsealed roads to reach the car park, and then a 500m walk through low-lying (windswept?) scrub to reach the headland and the lighthouse itself. 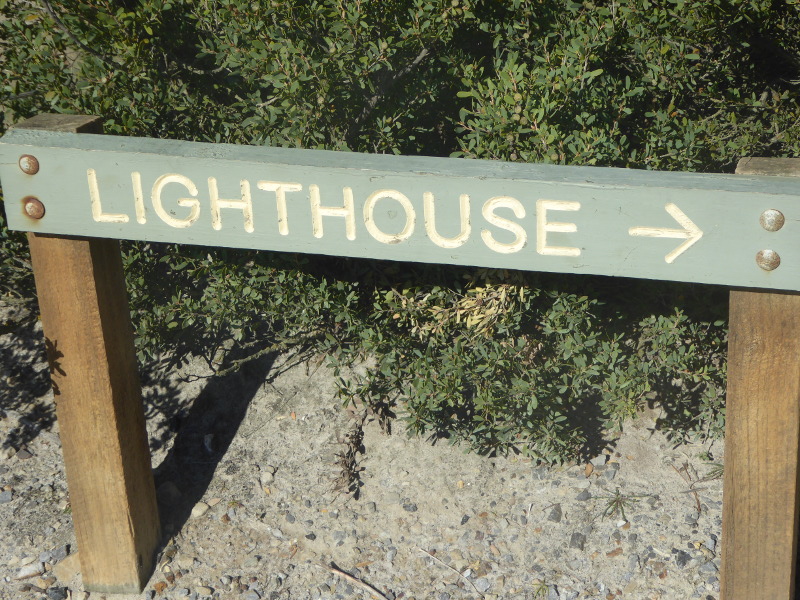 It was bright and breezy for my visit, but I imagine you’d come home fairly drenched if there was a real storm blowing out here. 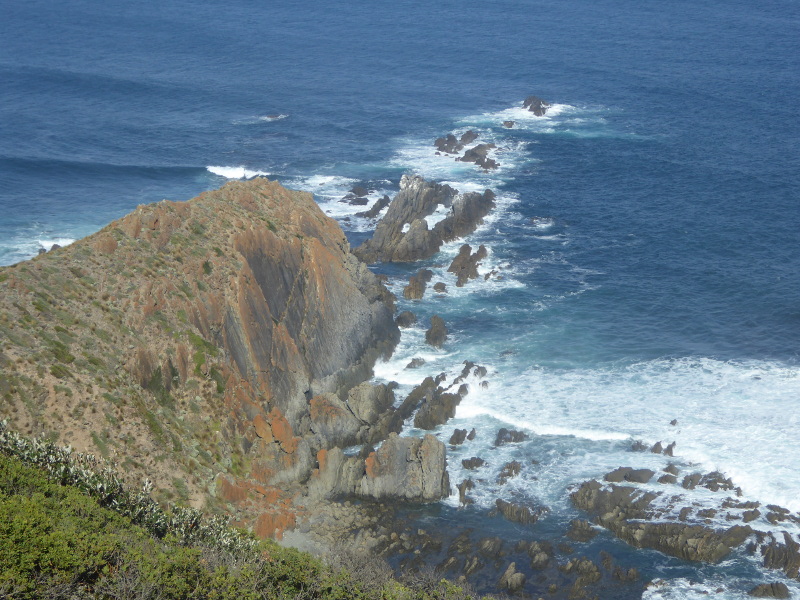 I heard the thunderous sound of waves crashing before I saw the light, or even spotted the surf down below. But the little look-out area gave a glimpse down to the rocky crags against which those waves were crashing, and then to the left there was the top of the lighthouse itself. 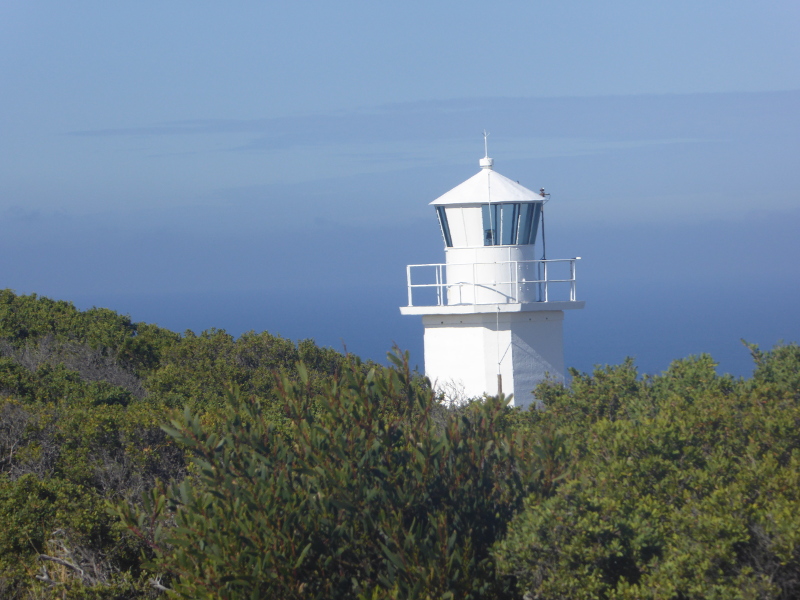 It looks like a fairly typical lighthouse really: perhaps a little shorter than some, but a cylindrical tower, painted white, with a balcony round the top for better viewing, or maybe just to clean the window panes from time to time? 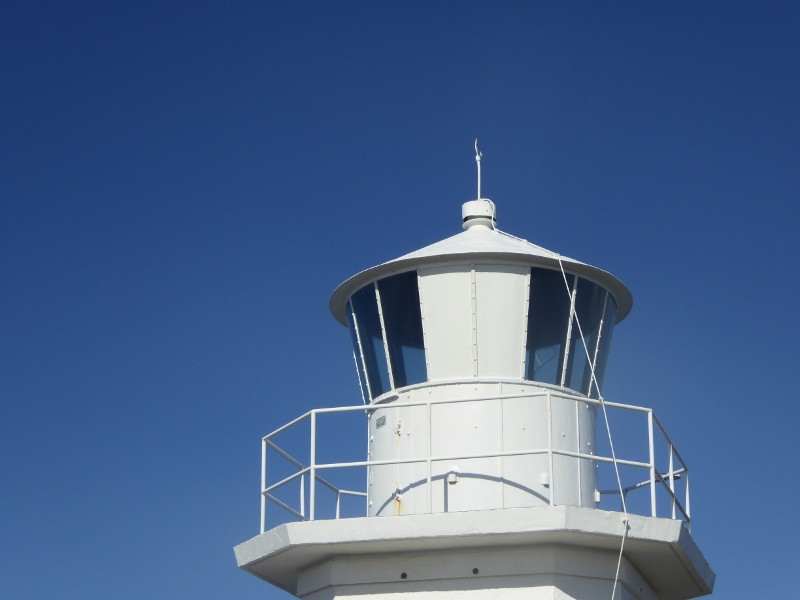 Out to the left Wilson’s Promontory stretches out far to the south, and somewhere along there are the lights of both Citadel Island and the Promontory itself, still to come on this tour of lighthouses in Victoria. 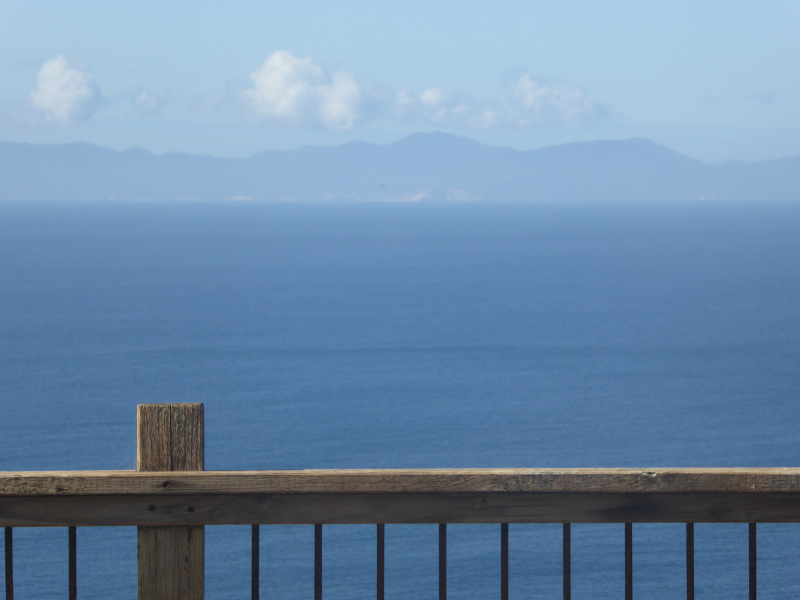 There’s an information board just behind the lighthouse with a brief account of some of the shipwrecks off the coast near here. 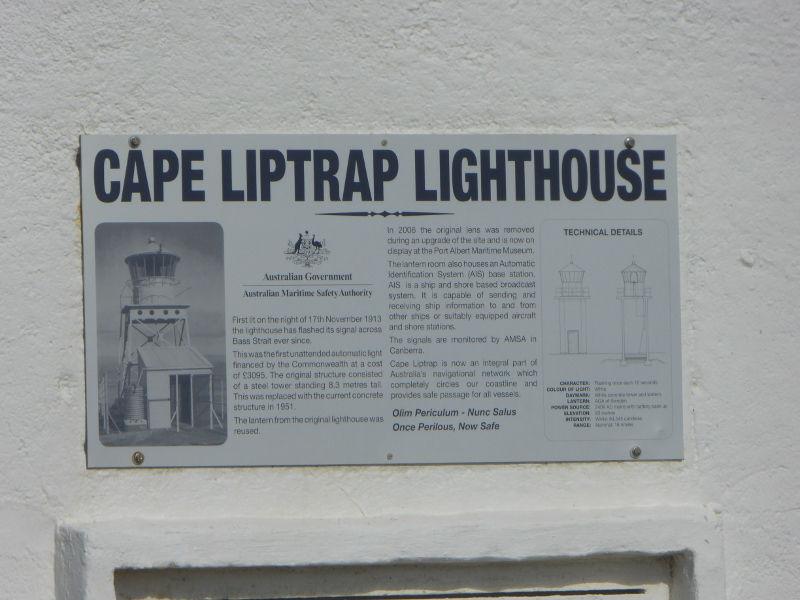 The one that interested me was the Magnat running aground in 1900, so quite a few years before the first beacon was installed. I’m not sure if the sandy beaches between Cape Liptrap and Wilson’s Promontory were where the Magnat came ashore (I had a feeling they might have been round the other way, to the right as you look out to sea, and back towards Cape Paterson?). But it is easy to imagine a ship off course with no light here on Cape Liptrap getting into difficulty. 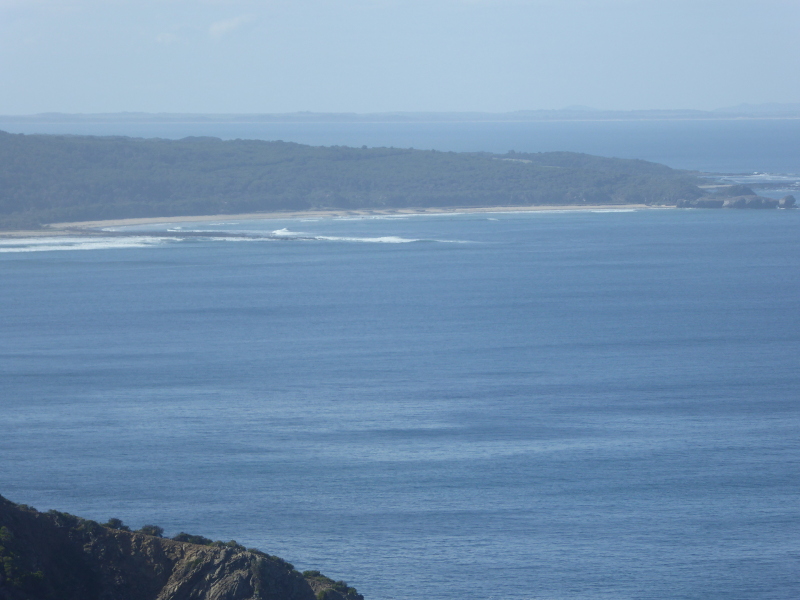 Because the people involved with the Magnat disaster intrigued me (see the stories below), I was keen to find the grave of the ship’s captain, Friedrich Oestermann from Germany, buried a few miles away in Tarwin Lower. 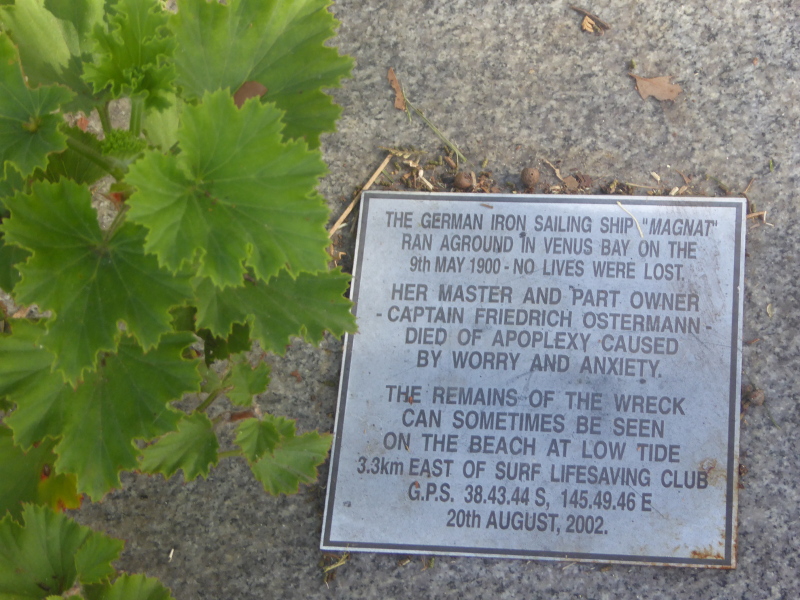 This must be the hardest cemetery ever to find; nobody I asked locally seemed able to give me directions; some didn’t even know there was a cemetery in town. But after driving up and down three sets of roads in and out of Tarwin Lower, I did finally find the place. And very glad I was, too. 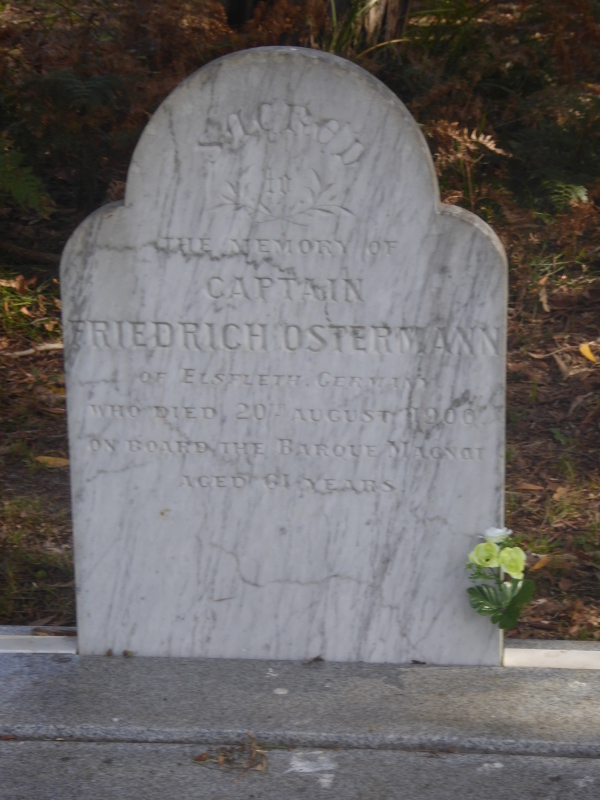 The cemetery is a beautiful spot, established just a dozen years before Capt. Oestermann died here, and his family back in Germany have managed to keep a beautiful headstone going; his story also gets a mention on the cemetery’s own noticeboard. 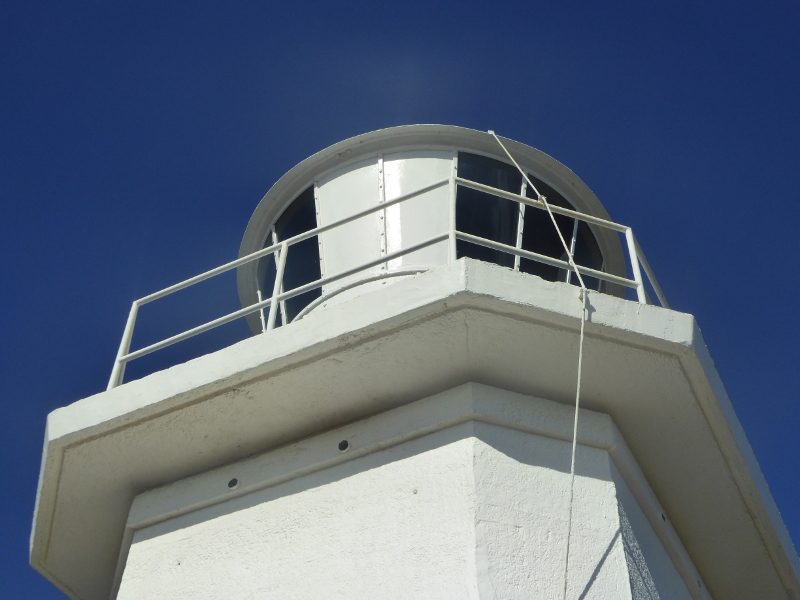 There are some picnic benches not far from the lighthouse, and I was tempted to stay a while and read in the beautiful sunshine and fresh air, but I’m glad I didn’t in the end since it took me a good hour to find that cemetery, and I’d have got home way too late if I had.

No toilets, no shelter

Picnic benches near the lighthouse

The Tarwin Lower cemetery is out of town heading back towards Inverloch. On the right hand side of the road as you drive Tarwin Lower to Inverloch – it is not visible from the road and there is no signage visible from the road. If you reach Masons Road, you have gone too far; there is a small driveway, which at first appears to head to a private residence, but which has a Stop sign. That is the road to the cemetery, which is gated, but you can drive right up to the grave areas, just making sure the gate is shut after you.

The original lighthouse was first lit in November 1913. It was made of wrought iron. But iron doesn’t survive too well on rainy, windswept cliff tops with salt spray in the air. So, in 1951 the current stone lighthouse replaced the first light at Cape Liptrap. 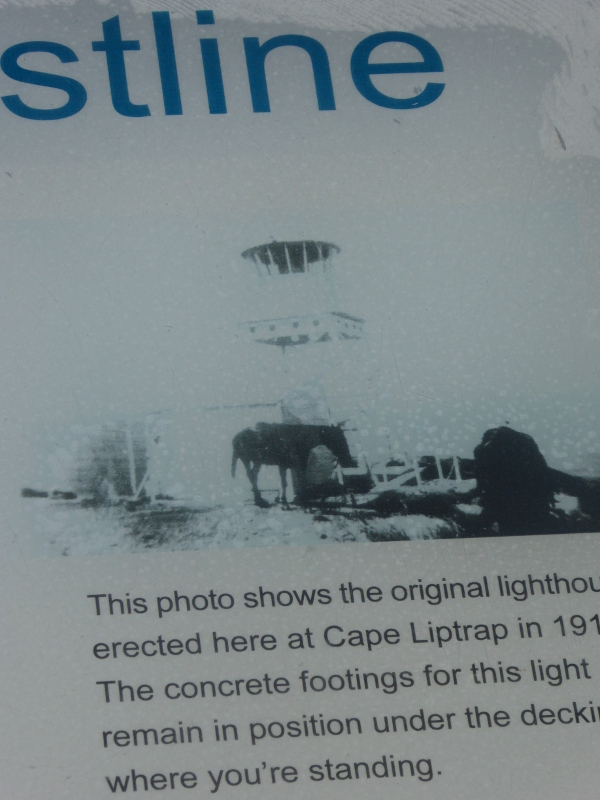 Lots of the optical apparatus was simply transferred from the old light. They even transferred the panes of glass from the old lantern to the new light, though there were a few teething troubles getting some of the panes out of the old lighthouse as the putty had become rock hard. But one commentator noted that only one pane had ever broken in the 30-odd years of the light operating, and that due to vibrations caused by rusting of the structure.

One of the novelties of Cape Liptrap light, even its earlier version in 1913, was that it was always unmanned, leading to speculation that one day automation would take over the whole lighthouse service. Old mariners also feared that a malfunctioning or extinguished light might cause more disasters if unattended than having no light at all, and this discussion became quite heated in the two years between the initial proposal and the actual lighting of Cape Liptrap beacon in 1913. Of course, the supporters of unattended lights have been proved right in terms of safety, though the ones who feared an end to the lighthouse service itself have also been proved correct, sadly.

World War 1 saw a German sea plane, based on a ship that was at sea off the coast, fly over the lighthouse, causing alarm that an invasion might be being considered.

A little bit of German maritime history links to the Cape Liptrap light, the first part of the story pre-dating both the original beacon and the first world war, while the second part did involve the lighthouse and took place not long before the second world war…

In 1900 a German boat called the Magnat was shipwrecked near Cape Liptrap.

36 years later the grandson of the Magnat captain was on board another vessel, the Goslar, and when in Melbourne managed via messages in the newspapers to find out where his grandfather was buried (Lower Tarwin Cemetery, in case you’re interested; name of Captain Ostermann). He didn’t have time to visit the grave, and probably with world events as they were developing, he may well never have managed it, but in 1937 when the Goslar again rounded the Cape near the lighthouse, he had his ship’s horn sounded as a mark of respect for his ancestor.

The existence of the beacon couldn’t prevent one ship sinking in 1925. The Awaroa sprung a leak when some miles off Cape Liptrap, but the crew could not find the source of the leak and were up to their waists in water, desperately pumping and baling bucket-loads of water out of the engine room before the captain ordered all hands to abandon ship. The crew managed to get to the life boats and rowed 2 miles to a passing vessel which saved them.

In 1934, a light aircraft crashed into the sea not far from Cape Liptrap lighthouse. No trace was ever found of the plane itself, nor of the 12 people on board. But the incident led, indirectly, to a wonderful invention still used today. The son of one of the (supposed) crash victims, David Warren later became a scientist who invented the black box, which would probably have been found and might well have explained what on earth happened to the airliner, the Miss Hobart, that day near Cape Liptrap.

In 1962 vandals threw stones through some of the windows, damaging some of the lighthouse lenses, but that is the only story I found on Trove relating to the current 1950s structure at Cape Liptrap.

I’d love to know more of any stories linked to Cape Liptrap light – can anyone help?

What are your experiences at Cape Liptrap?

Has anybody been inside the lighthouse or up on the top level to see the view from the balcony? If so, please let us know what you found.

What do you like best about the Cape Liptrap Lighthouse if you’ve been to the area?

Or does anyone simply have a story to tell to bring us up to date beyond the 1960s?

Other links and writings on the Cape Liptrap Lighthouse

The Weekend Notes website has an entry on Cape Liptrap Lighthouse.

This is the entry on Lighthouses of Australia.

Melbourne Playgrounds also has an entry on Cape Liptrap.

And for aerial footage of Cape Liptrap Lighthouse, check out this YouTube video from Tim Burgess.