The 1920s frontage of Brunswick Baths remains a local landmark. Most of the swimming pools have been rebuilt several times over the decades but the brick wall along the side is of 1914 vintage.

I’d driven past Brunswick Baths countless times before finally going through the entrance for a swim. To be honest, as far as Vintage Victoria is concerned, it’s really only that façade that counts as genuinely vintage, as the swimming area inside and out has been completely refurbished several times over the decades.

It’s a thoroughly modern pool now – well, group of pools – but it has so much history that, in the outdoor pool, especially, it’s easy to think back to swimmers past and incidents on and round the premises as you do your laps. 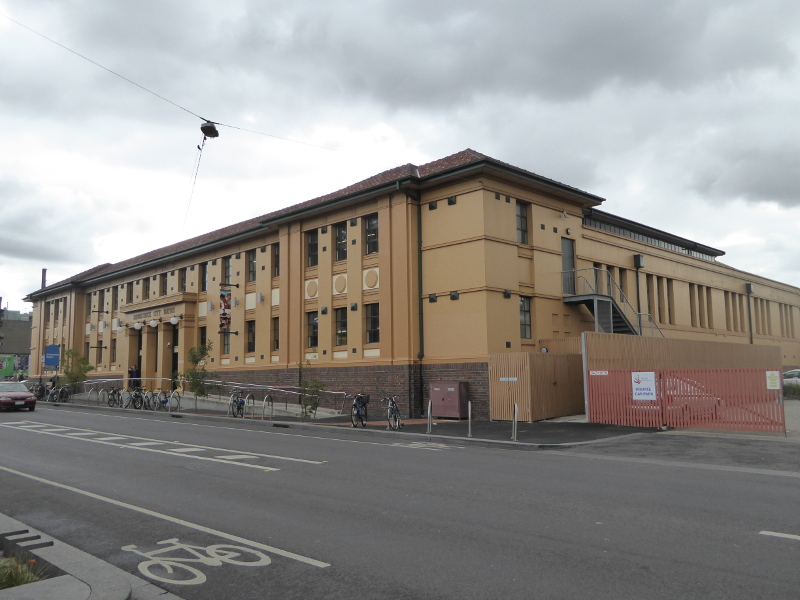 The frontage is really impressive, dating from the late 1920s – the foundation stone was laid in 1928 but the baths in this building only opened officially in November 1929. 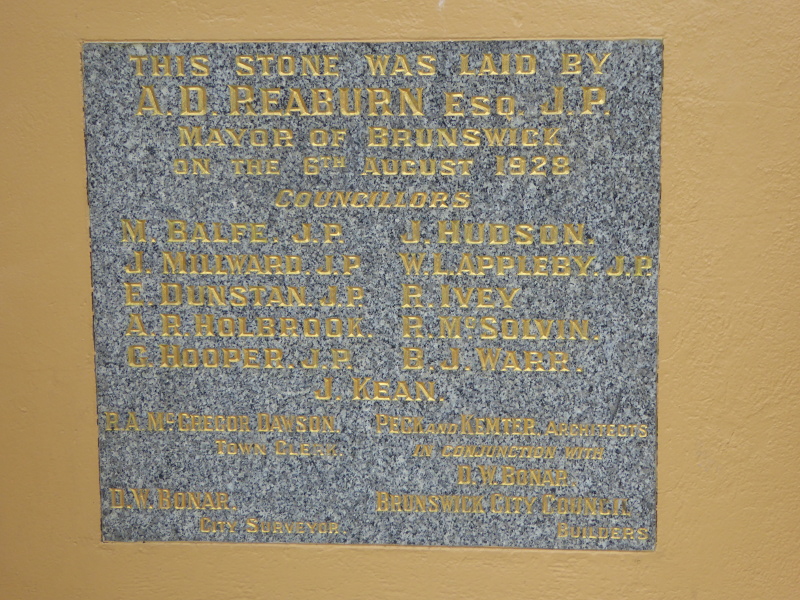 It’s worth taking a look at other buildings in the vicinity as many have their date of birth up high on the gables, and that end of the 1920s period must have seen massive changes around Brunswick judging by how many places were built over a five years period.

And best of all for this keen outdoor swimmer is that the 50m Olympic pool is open all year round, with water heated to a decent temperature. 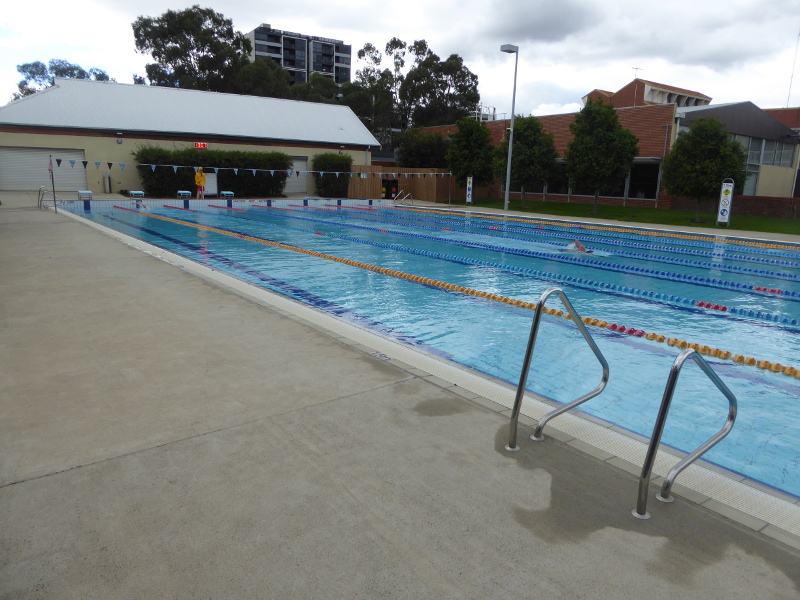 It wasn’t until I began doing my freestyle laps that I spotted the murals along the side, painted onto the brick wall. A lot of these are well and truly covered by foliage now but they have some great swimming scenes in them and it seems a shame to me that the Baths don’t do more to reveal these and give us a bit of history. 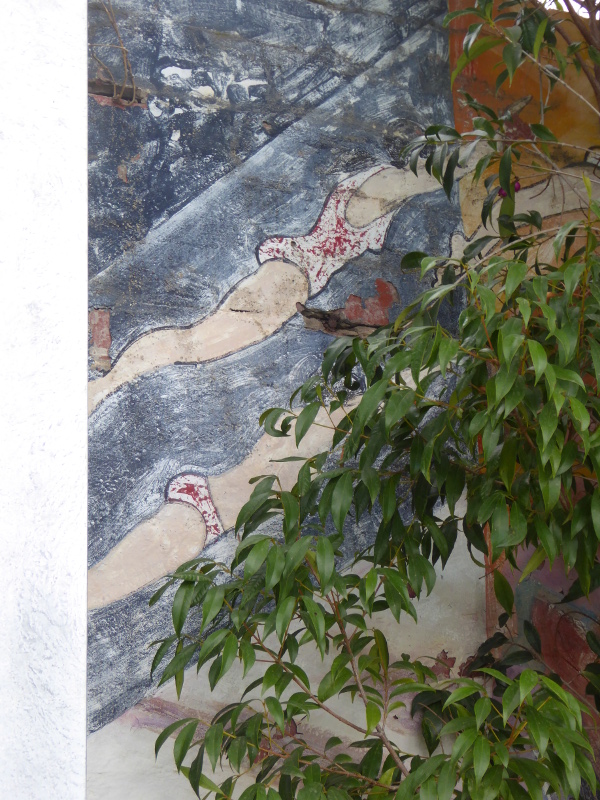 The murals don’t date back as long as the Baths themselves – they were painted in the 1980s so not really counting as ‘Vintage’ yet – but the brick wall certainly does, and it apparently was built when the first Brunswick Baths were opened in 1914. If you look at the rising level of the wall as you swim up the 50m pool, you can see that it is actually alongside the stairs that cross the railway line right by Jewell train station. 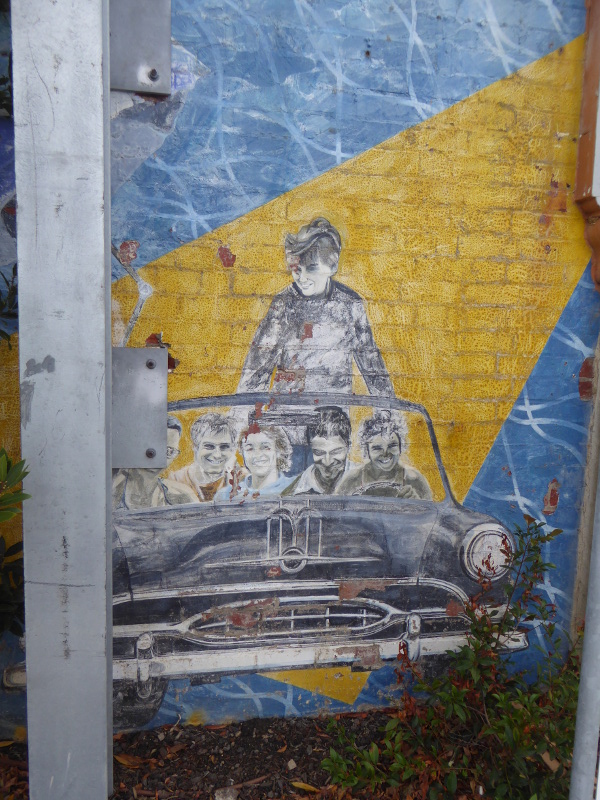 I wonder if that was the part of the wall the teenagers scaled over to gain illegal entry to the baths back in Depression days? I didn’t go round to the station side to see how hard that would be today…

And unlike many pools in Sydney where you can watch trains go by as you do backstroke, the Brunswick trains have no sighting of swimmers as they go past. Was that perhaps to do with the moral scruples of the churches round here which seemed to get very involved with Brunswick Baths development in the early days to an extent I never read about around Sydney’s older pools… 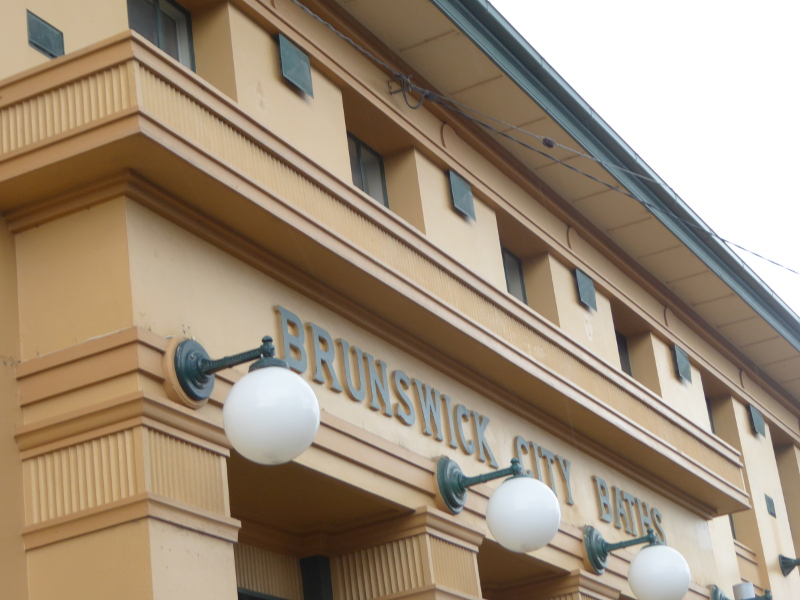 Still, not much vintage here, but I am glad they kept the façade and that they keep the pool open all year, especially having read of the big arguments 80 years ago over whether it was economical to keep an outdoor pool open all year. And if I was running the place, I’d love to see some sort of recognition of that brick wall, and yes those murals too…

Smaller pools and play areas inside

Link for info on accessibility

History and stories about Brunswick Baths

The original Brunswick Baths opened in 1914 but the building we can still see today on Dawson Street was opened in November 1929, a year or so after the foundation stone was laid (which is still visible). They were built on the site of what was once a pound for straying cattle and other livestock, which perhaps shows how close to the edge of the city Brunswick once was.

The outdoor pool was the men’s pool and the indoor pool for ladies, with a wading pool added a year or so later. Mixed bathing quickly became popular (in spite of opposition from the Mayor who reckoned that it would mean ‘stout’ people like himself being mocked – though quite what that has to with gender is anyone’s guess…), and it led to several clashes with the Catholic Church, more on which is below.

The national swimming championships were held at Brunswick Baths in 1932. 2,600 people were there to watch Andrew ‘Boy’ Charlton win one race. His name is less revered in Melbourne than Sydney these days, maybe, but I’m sure he was a big crowd-puller back then, and it was his first ever swim in Melbourne, apparently.

The wall along the railway line which is still there today and was part of the original 1914 construction, was scaled by three unemployed youths in 1932, desperate for a swim in hot weather, but unable to pay the entrance fee. They were caught and fined 2/6 each (about 20c today but how did that compare to the cost of a swim in 1932?). The Council, which brought the case, argued that “the practice of getting over the wall of the baths was becoming prevalent, and must be stopped.”

In 1932 the Baths were closed in winter due to lack of business August to November. But by 1946 that debate was back with a heated discussion in the Council about the need for economies in Council finances, but the needs also of thousands of Brunswick residents who lived in lodgings without hot water, meaning the baths were the only chance those folk would have of staying clean in winter. The motion to keep the baths open all year was passed.

The Age in September 1936 reckoned Brunswick Baths were “among the best in the southern hemisphere,” and in 1939 one news clip heralding the start of that summer’s swimming season, declared the facilities at Brunswick Baths to be possibly the ‘best in the Commonwealth’. The same article quoted Brunswick Swimming Club as looking to return to the days when it was seen as ‘the most virile in Victoria’. Hmmmm, virile in Victoria? Not a slogan you’d opt for in this day and age, I feel.

There might have been a bit of Sydney v Melbourne rivalry showing when NSW high divers complained that Brunswick Baths diving tower was dangerous as there was not enough deep water under it for them to do Olympic-standard dives. Long-standing pool attendant Mr W Mitchell claimed nobody had complained before and that American Olympic diver Frank Kurtz had dived at Brunswick without issue in 1933…

The Catholic Church was also at odds with the Baths on several occasions through the building’s opening decades. In 1931, local Catholics objected to mixed bathing being extended to school days for Brunswick Baths. The Council had taken the newsworthy step of allowing mixed bathing sessions within weeks of the baths opening in 1929, but the school-day mix was a step too far for Catholic schools, which argued that the rule deprived their kids of the chance to swim. During the same dispute, some 150 bathers walked out on one day when mixed bathing was restricted, so there was quite a tussle over the issue at the time.

Then there was the 1953 incident of the billboard poster advertising the baths. Taken down by the Council after complaints from the Church that it would ‘pollute the minds of children’, I loved some of the local responses that they had seen girls on the beach with less on, and even that it was nothing compared to what some children’s books contained. I’m sure the image wouldn’t work in 2019 but really what was going on in the minds of those church folk to object so strongly to a picture like this???

But religion was a dominant force in Australian society back then. And it wasn’t just the moral sounding board. The Brunswick Baths were used a few weeks earlier in 1953 for baptising 220 Jehovah’s Witnesses. I wonder when they were last used for that kind of ceremony?

Not so long ago, Brunswick was not the latte loving place it is today: an accident in 1955 saw a 14 year old boy shot at the Baths. Leslie Brown was a junior swimming champion who was shot in the changing rooms. Police believed it was an accident but reckoned that the guns were probably stolen property being stored in the changing room lockers!

I loved the story of Mercedes Gleitze, who broke her own endurance swimming record at Brunswick Baths in April 1931, by staying in the water and swimming continuously for 44 hours 30 minutes. This lady was a bit of a celebrity at the time and used to do extraordinary swims such as swimming round the Isle of Man, swimming the Straits of Gibraltar and was the first British woman to swim the English Channel. She died in 1980 but was always based in the UK, even though of German heritage. Her life story must be a fascinating tale, and I wonder how she coped during WW2 with her Germanic roots. Her trip to Australia was one of many overseas exhibition swims she undertook.

200 people apparently paid 1/1 (less than 10c) to watch her finish her Brunswick Baths marathon. She was kept awake by attendants who played music throughout the swim and fed her honey and water, hot soup and condensed milk every half hour for the 44 and a half hours swim.

Other links and writings on Brunswick Baths

This is the Victoria Heritage Council’s entry on Brunswick Baths.

There is more history of the baths in this petition when the whole complex was under threat of closure in 2007 .

This article in the Northsider web magazine refers to 1914 as the opening date for the baths.

Australian Leisure Management reported on the re-opening of Brunswick Baths after the 2013 refurbishment.

The Every Day Give Yourself a Present blog reviewed the whole Baths complex post 2013 refurb.

And Girl Tweets World is a blog by a UK expat now back in UK and missing Brunswick Baths .

What are your memories and stories about swimming in Brunswick Baths?

Are you a regular swimmer there? Have you seen many changes at Brunswick Baths over the years? I don’t suppose anybody is still around who’d have been there – in a pram even? – when the ‘new’ building opened in 1929?

Does anyone remember the controversies over mixed bathing, or even that poster advertising the Baths?

It’s worth walking a couple of blocks down the path next to the railway line (head towards the City) for the best coffee shop in Brunswick (in my view anyway). I love the quirkiness of Acustico, but it also serves fantastic coffee and tea, with some great spaces for chilling or people watching.