Black Rock Jetty has been the viewing point for the old naval vessel Cerberus for the last 95 years. The waters and cliffs nearby have also seen their share of drama over many decades.

Black Rock Jetty is probably most famous for being within sight – and within diving range – of the old Australian Navy warship the HMVS Cerberus (a warship in name only, however, as it never saw any real action in its relatively short lifetime). 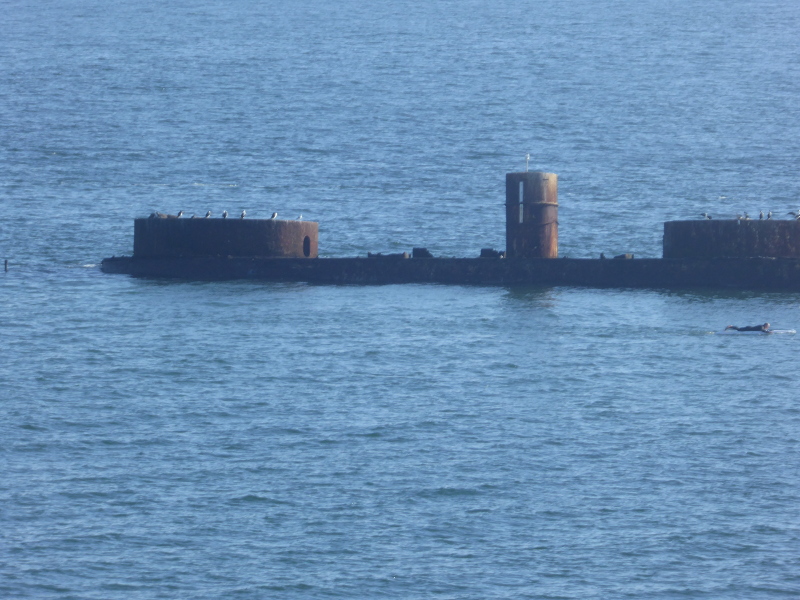 I could see divers snorkelling face-down in the water by the sunken ship before I even spotted the jetty, actually. 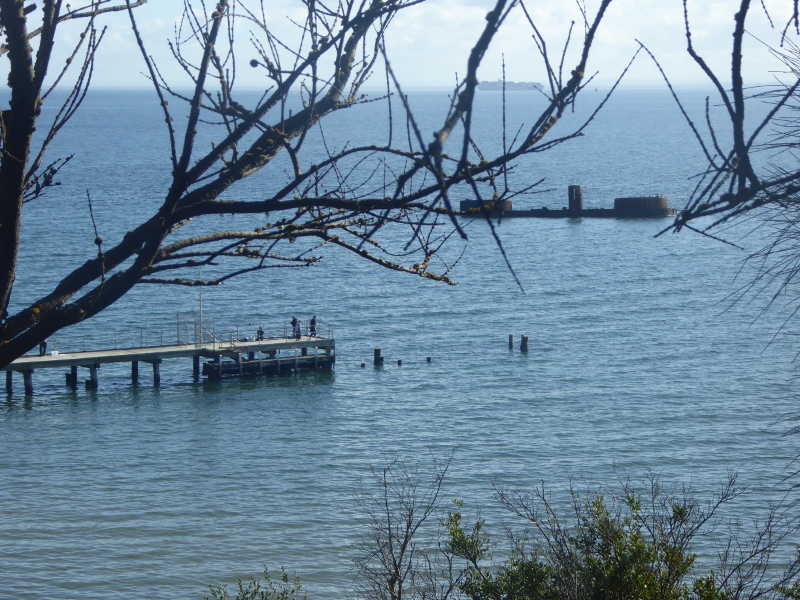 The Cerberus was sunk here in 1926 – making it vintage in its own right – serving now as a breakwater, though it has apparently had a few collapses of its own in recent years, and as my history search discovered, was also the scene of a diving tragedy in the 1950s… 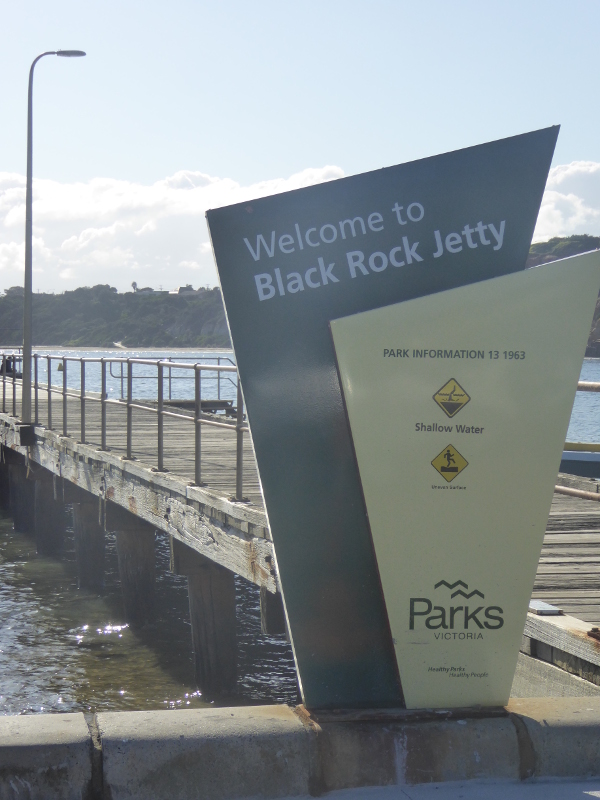 On this fine sunny Sunday in mid-winter, the whole Black Rock area was busy with visitors (and parking officers doling out parking tickets, too, so make sure you park in the correct bays if venturing down the cliff to water level). 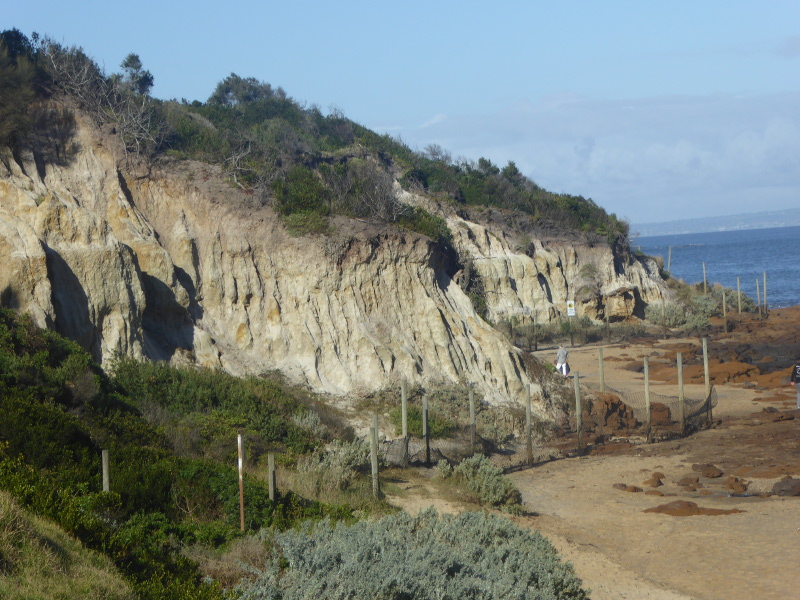 The hard sandy cliffs I spotted just south of the jetty were also a reminder of another disaster I discovered from many decades ago, when two boys digging a cave in these very cliffs died when the cliff collapsed on top of them. So, beautiful and craggy they may be, but don’t start any major excavations here…

It is quite a drop from the coastal road down to the jetty, and cyclists free-wheeling down this short stretch of road to the harbour area and the yacht club do pick up a fair pace, so something else to be wary of if, like me, you walk down to the jetty. 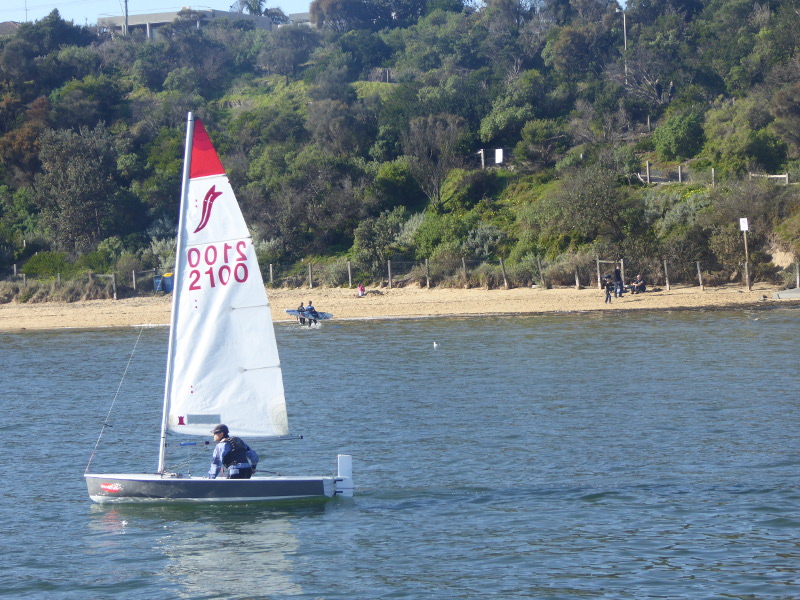 There was a bigger crowd lining up to buy coffee or ice creams in the café in one of the yachting buildings down here than there was wandering onto the pier itself. But there was also the occasional small yacht setting out and gliding past the jetty, too. 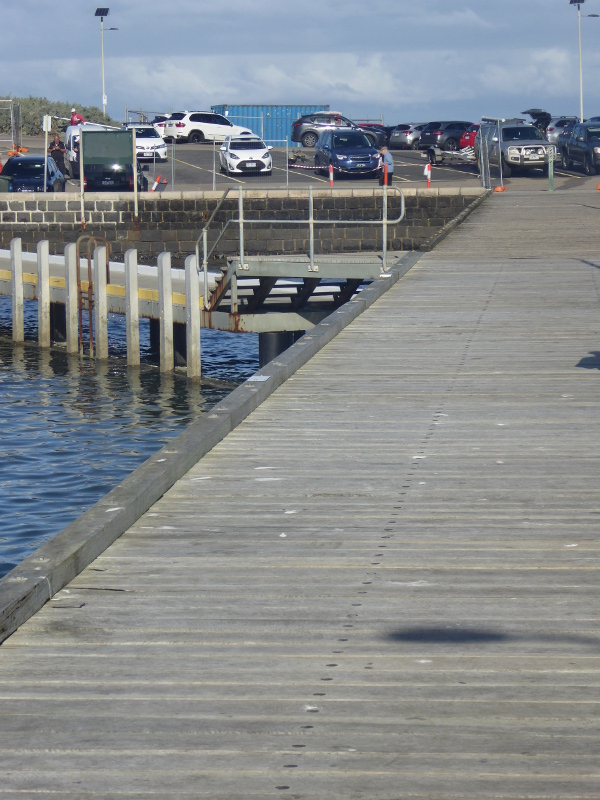 They have built a new section to Black Rock Jetty, reaching the main finger of the jetty at an angle taking pedestrians directly from those yacht club and sailing school buildings. But I wanted to take the older boardwalk section, which was still open to the public in June 2021 (and I hope the council has no plans to close off that old boarded walkway). 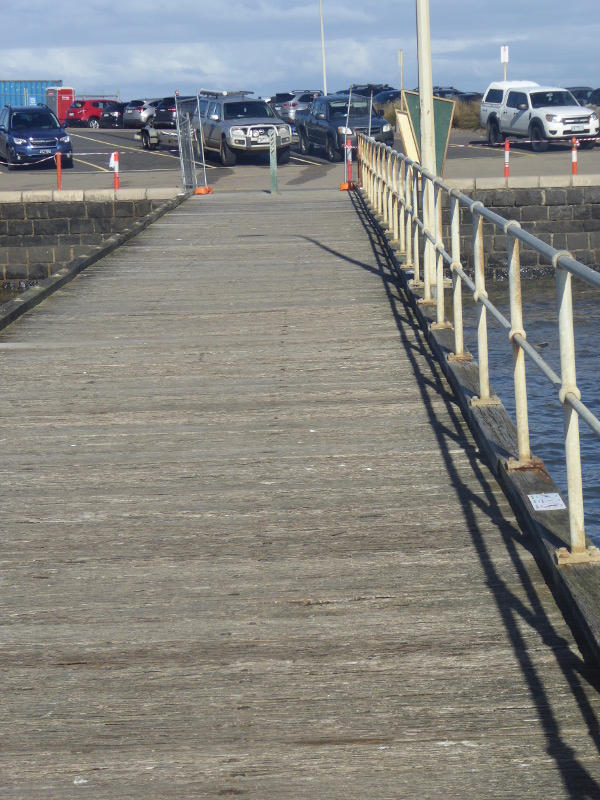 The planks are somewhat creaky and bounce a little, but seemed solid enough. And I always do like it when you can see the water through the cracks in the boards – that’s what makes a pier in my book, anyway. 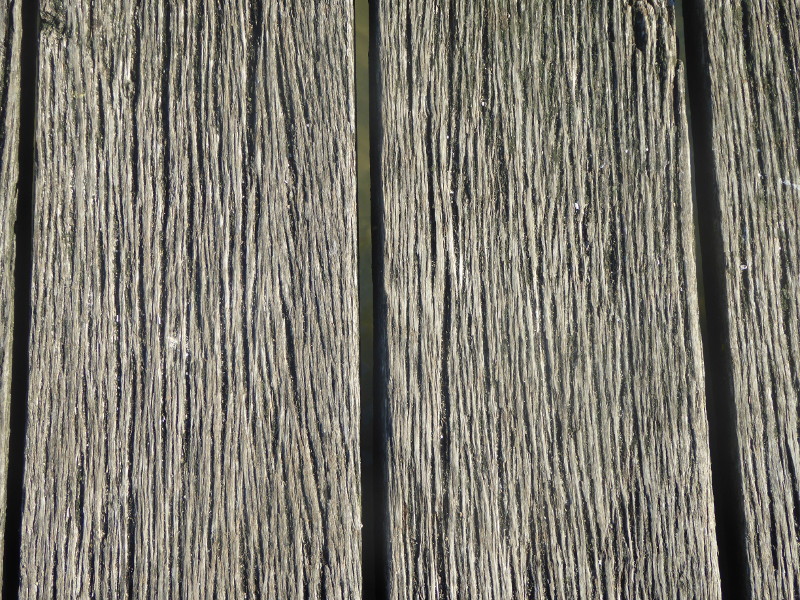 I reckoned the old stretch of jetty took me about 65m out into Half Moon Bay, with another length of a similar size made up of newer planks beyond that. 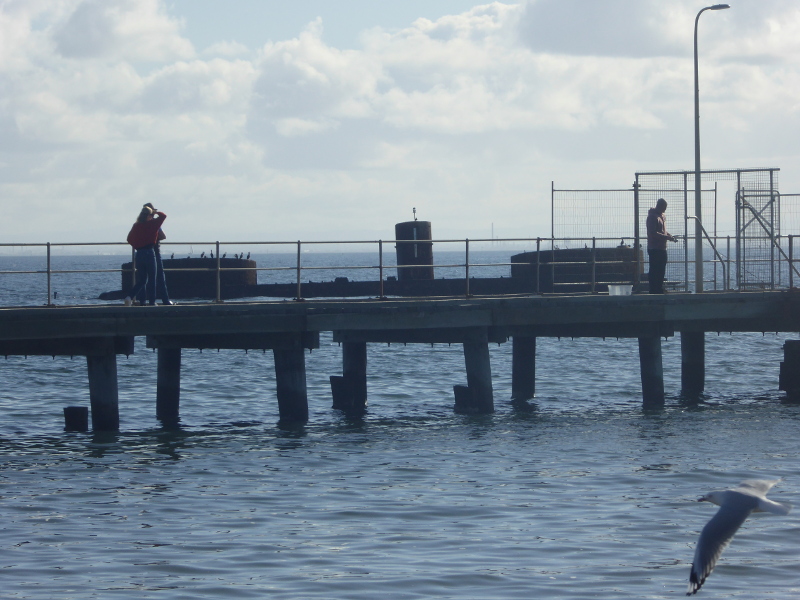 At the end of the jetty was a handful of fishermen, talking Greek I think.

Most people seemed to be out here to take the air and to look over to the Cerberus, though. 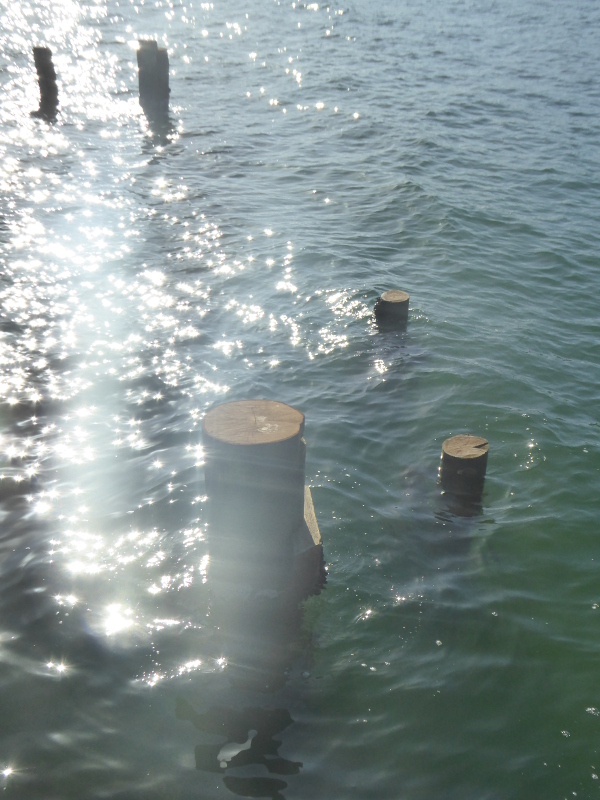 These old stumps of pier piles made me wonder if the original Black Rock Jetty had continued further out at one stage?

One woman sat scrunched up on a jetty step reading her novel, and I kind of wished I’d not left my own book in the car, as this would have made a nice spot to sit and contemplate or feel the breeze over my face as I turned the pages. 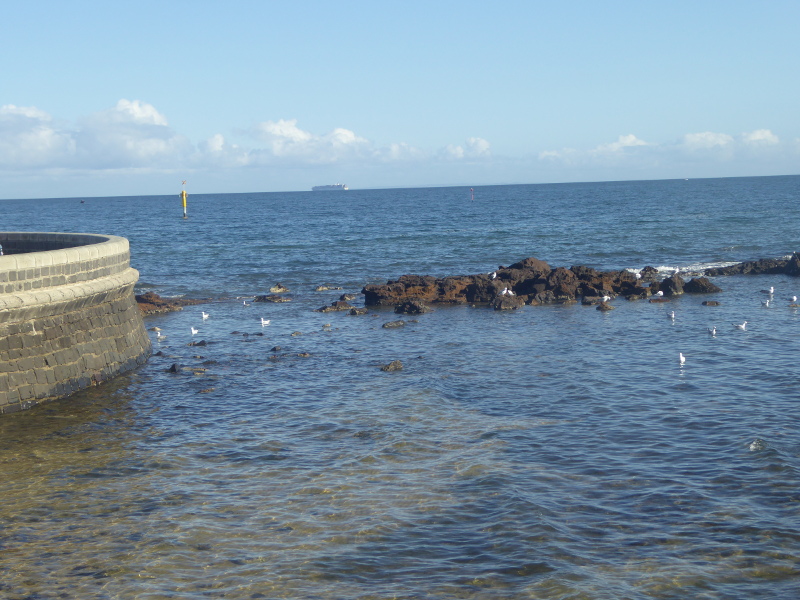 There’s an old bluestone wall curving its way round the point just to the south of the jetty, and a little run of rocks (that looked more red than black, though) that served as a perching spot for birds, and I wondered if any boats had come a cropper on them in earlier days. 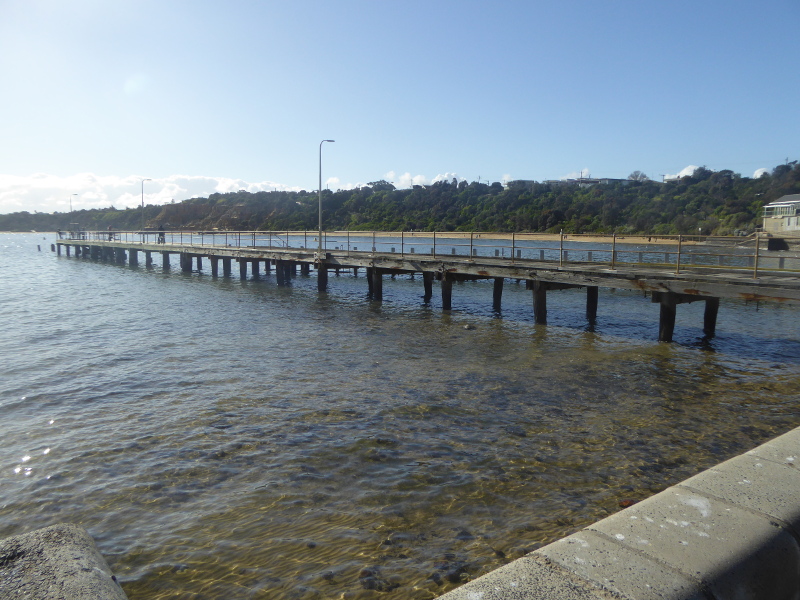 I didn’t see any benches along the jetty itself: the people fishing were standing, and the woman reading sat on a step. And as usual on piers in Victoria, there was no shelter in case a sudden shower hit, but with the jetty being fairly short, you wouldn’t get too wet running for shelter anyway.

A pleasant spot tucked away down a cliff that I didn’t even know existed from driving past here in the past. So a nice discovery, and one to return to on a wilder day, maybe?

No benches on this jetty, and no shelter.

Beware where you park, especially down by the jetty itself…

It’s not clear when Black Rock Pier was first built but in the Trove database the first mention came only in 1912 when the pier was a marker for a swimming race from Brighton, and later that year after volunteers had built the local life saving club building, a display of their work was put on next to the pier on the day the building opened officially. 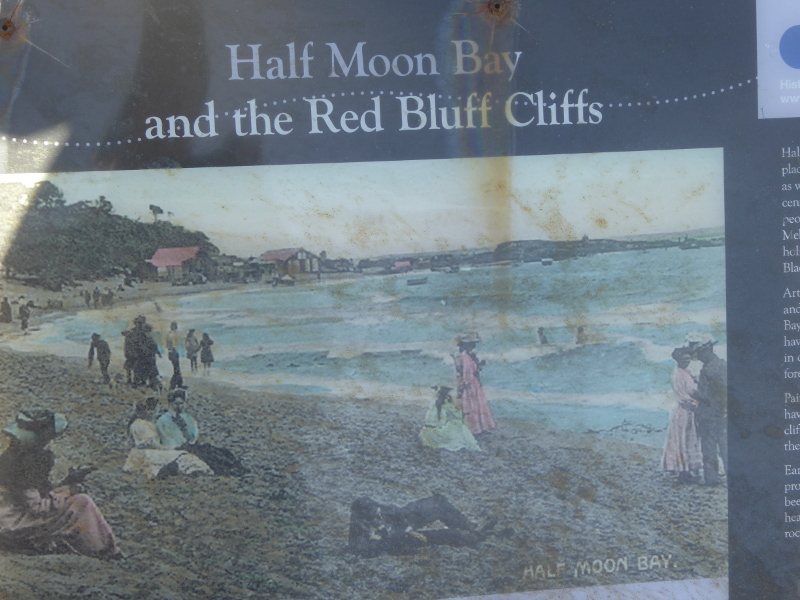 Tragedy hit a woman called Rudge in 1918. She had already lost a son in a motor accident while her husband was at the front. Then, in February of that year, her husband and another son drowned on their way back home after a trip to Mornington by boat. The body of her husband was found near Black Rock Pier, and the poor woman was called in to identify it. The motor accident that killed her son happened in front of the Glenferrie Theatre – not the only such accident during WW1, but strangely that one didn’t appear when we searched for the history of that theatre after visiting today’s Lido Theatre in Hawthorn (formerly the Glenferrie).

Another tragedy struck in 1922, when two boys died just 50 yards from the pier in a fall of sand after they had created a cave in the cliff close to the pier. A third boy ran to find help but when the boys were dug out of their self-made cavern, they had suffocated.

1926 the Cerberus was sunk here to form a breakwater to protect yachts and other small boats mooring here. Now a tourist destination.

1929 some of the timbers half way along the jetty had collapsed in the centre, making it a dangerous place to walk, but because of a 6-month long timber workers’ strike, it took the council quite a while to make the repairs.

An army frogman on under-water exercises sadly died after being taken from the water on his way back to the jetty from the Cerberus wreck in 1958. He apparently surfaced when halfway back to the pier indicating he was in difficulty, but help didn’t reach him in time to save him, in spite of efforts of doctors at the Alfred Hospital back in Melbourne.

Other links and writings on Black Rock Jetty

I didn’t really find any other posts or bloggers writing about the jetty at Black Rock, but I did like this Australian Navy website entry on the history of the Cerberus.

There’s also this Fishing Mad entry on the waters around the jetty at Black Rock.

And ScubaDoctor writes about the diving perspective on Black Rock on its website.

What are your stories and memories of Black Rock Jetty?

Does anybody have any stories from the past to bring Black Rock Jetty up to the present day from the date of my last story off Trove in 1958?

Can anyone fill us in on what those piles that still sit just above the surface of the water once supported? Was it the line of a previous version of the jetty?

Or just get in touch with a comment on your own experiences down at Black Rock Jetty, or in the waters around it.