Some of the trees in the Bendigo Botanic Gardens may well date from their early years in the 1850s. The vintage pavilion is a little newer than that. And now there are Gardens for the Future too.

We weren’t sure what to expect from Bendigo Botanic Gardens. Some of the historical articles I found on Trove were far from complimentary back in the 1800s, not long after they were first opened, and even the most recent news piece I found referred to foul-smelling flying foxes ruining the experience for locals these days. 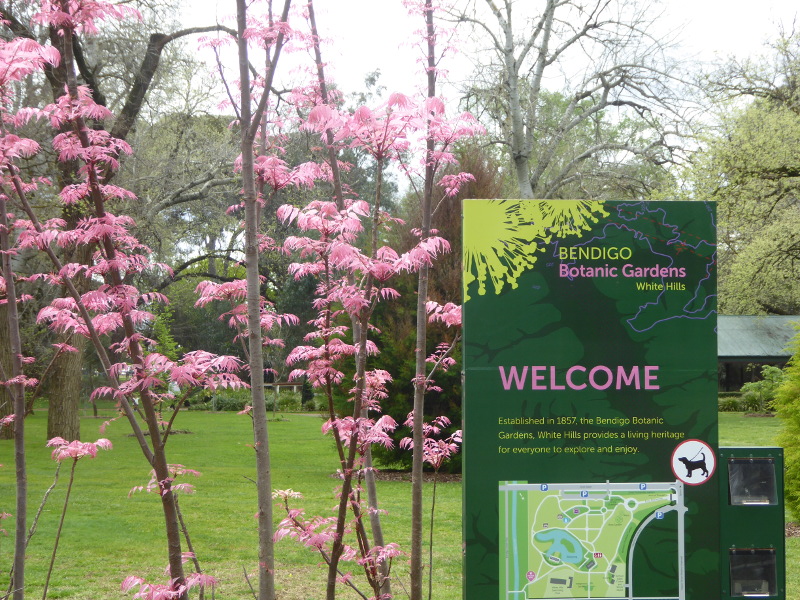 Well, on this fine spring morning, on our first trip since the COVID restrictions were lifted again, I am pleased to report that there were no noxious odours, and our hour or so wandering through the gardens was an absolute delight. 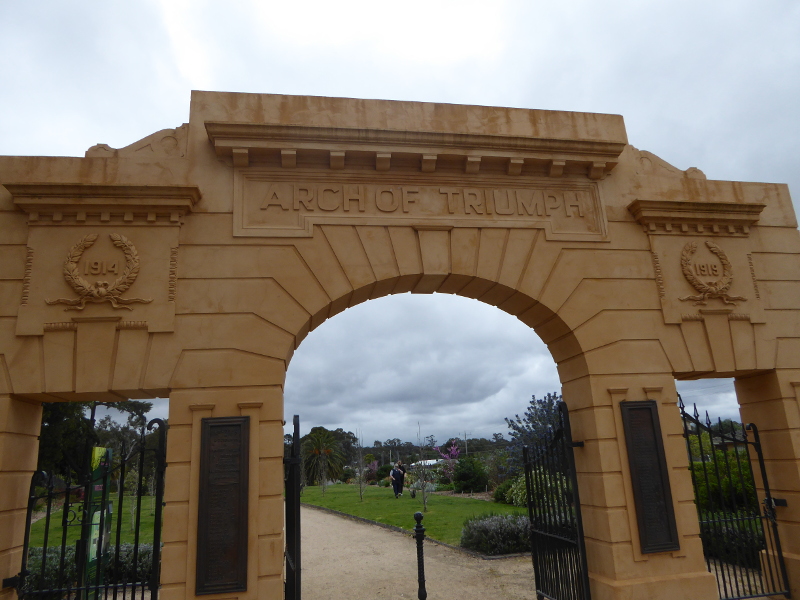 We entered through the 1925 archway erected to commemorate the locals lost in the first world war. This is visible from the main highway heading north out of town, so I had seen this many a time as we drove past, having no idea of the gems that lie beyond. 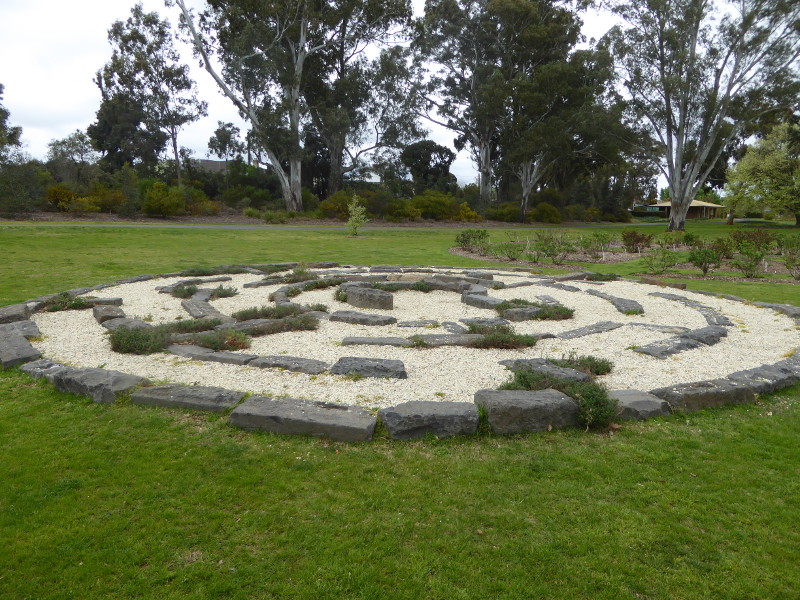 Our first aim was to find a nice bench to have our coffee, preferably by some water. So we walked right past what we later realised was the ‘maze’, but more on that below. 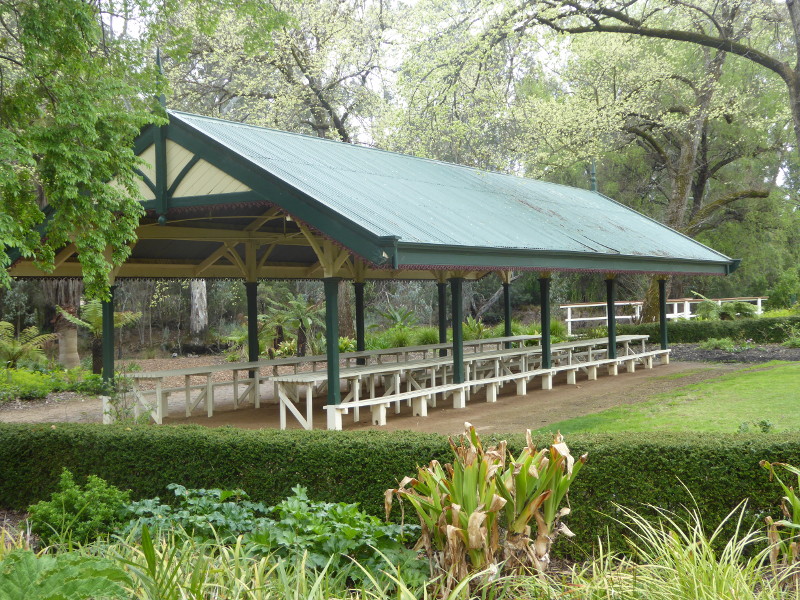 We actually took a seat in what they call the ‘pavilion’, a nice vintage structure in its own right, though it’s the first pavilion I have ever seen with no walls, and just a roof to cover the folk needing a rest or a spot to eat their lunch. 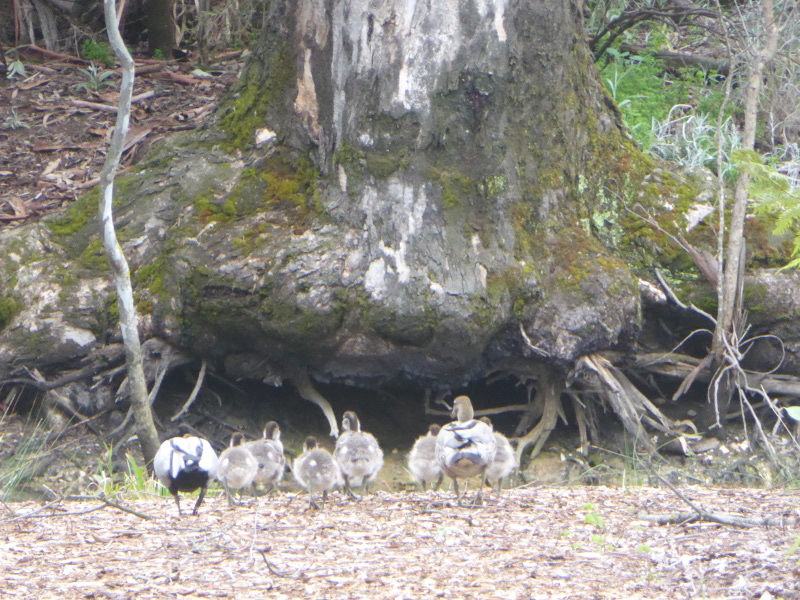 From our bench, we had the chance to see some of the wonderful birdlife that fills these botanic gardens. These ducks were just waddling away towards the lagoon, taking the kids for a dip. 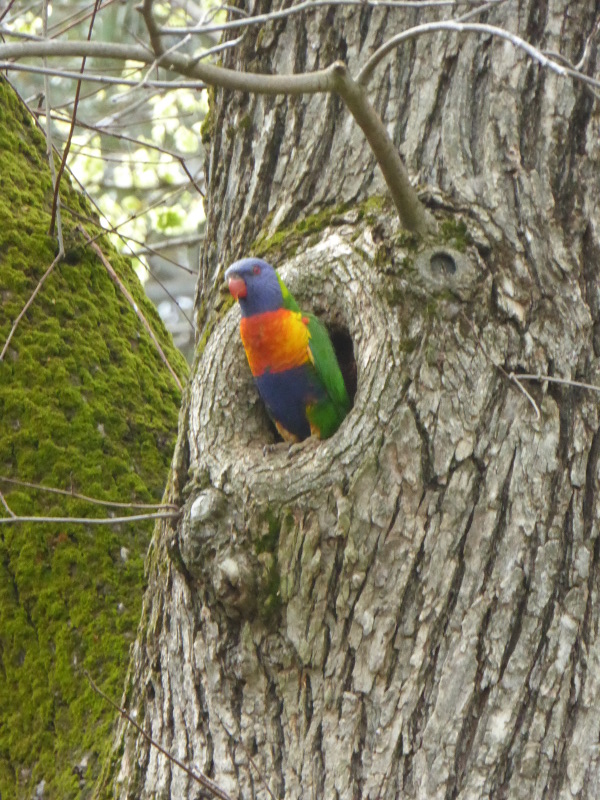 These colourful residents clearly had a nest in the tree bark, and were probably feeding youngsters in that hole up there. They kept our attention for a good long while, and we couldn’t help thinking they must be glad not to be caged up in the aviary not far from the water, which was closed to the public, but did look a little compact for parrots and other free-flying birds that clearly still live in there today. 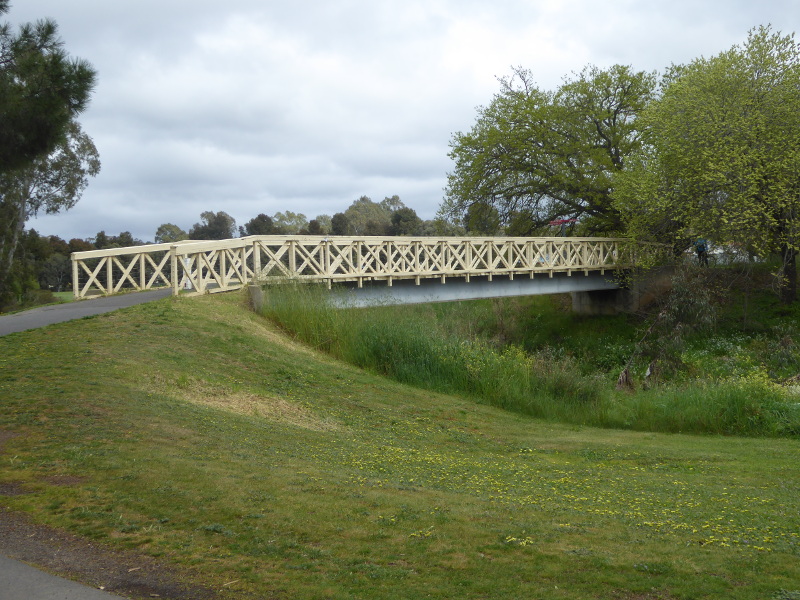 From the lagoon, we walked on, past the swimming pool, which looked rather 1980s (or even 70s) and not really of much interest architecturally, to the wooden bridge, which did look as if it had seen a few more decades than that, and led over the creek to various biking trails heading north and south. 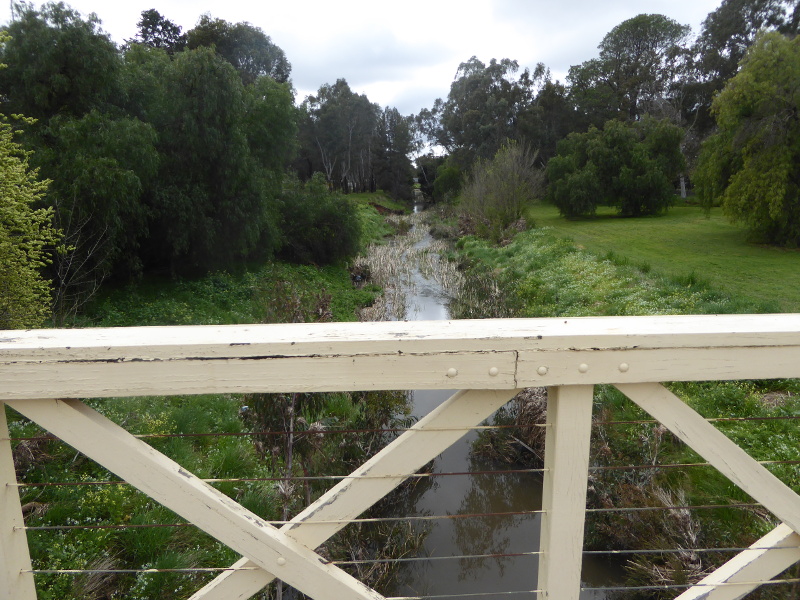 Near this end of the gardens is the Garden for the Future, which at first didn’t look that impressive, and needs to develop somewhat before it meets its claim to be full of ‘fun and fantasy’. But actually, the more we walked around it, the more we did enjoy it, with its focus on natives, and with its open spaces being used by kids on trikes and with footie balls. It also had a long line of benches which reminded me of some of the Edwardian seaside resorts back in England, so is clearly ready to cater for big groups here, when the weather is right. 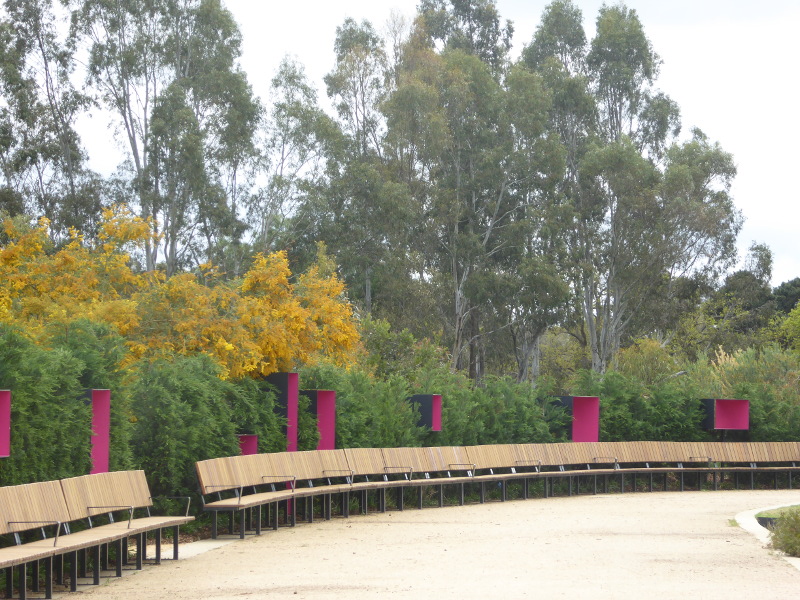 Back in the main Botanic Gardens, we loved some of the big gum trees, with their stylish barks, in so many colours, though we both felt there could have been more labelling to pique our interest a little more than they did manage. 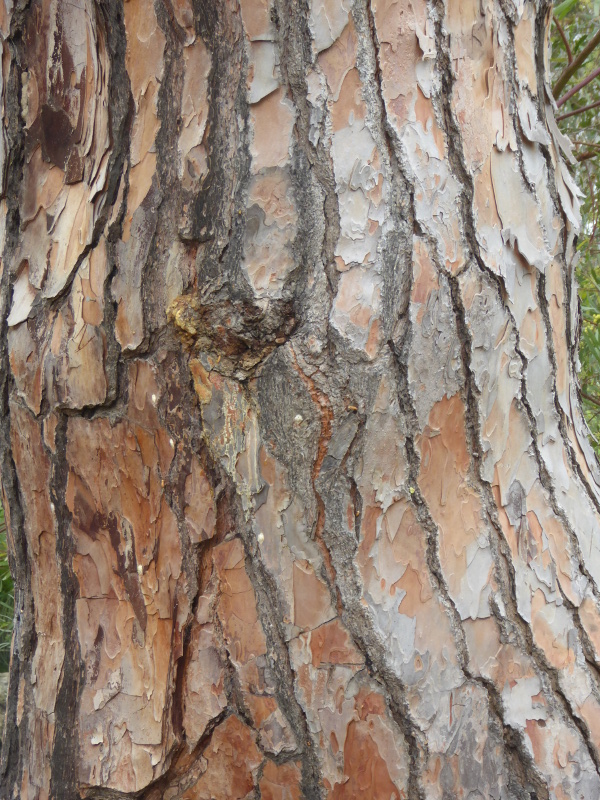 The cottage garden section was beautiful, and had some marvellous veggie beds beside it, along with this cherry blossom awning to walk under. 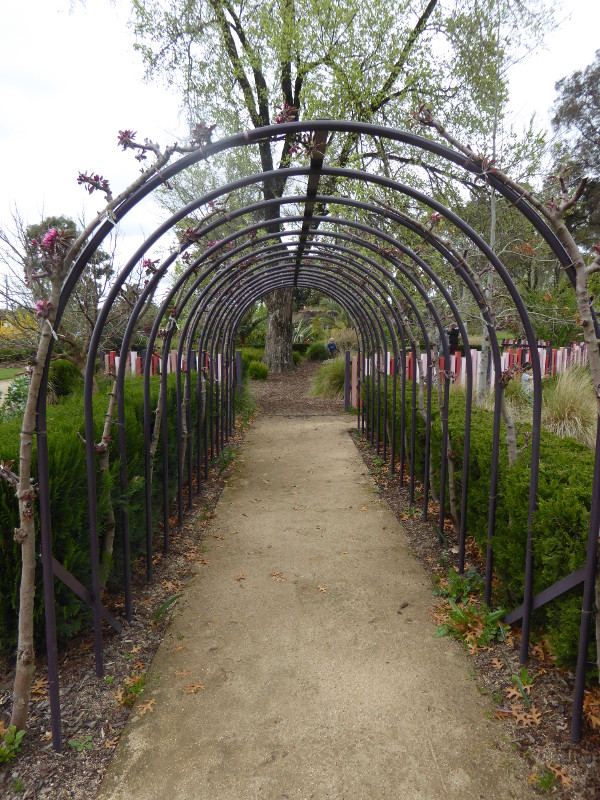 We passed this mound, which seemed to be something to do with the MacLeod clan, making us wonder what was the Scottish connection to this place. 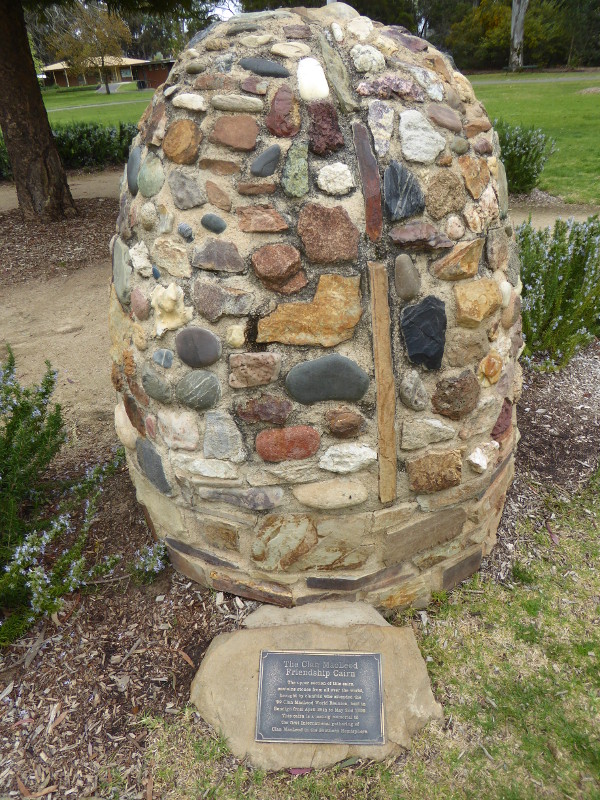 And then this plaque remembering the Cornish miners who persevered with gold prospecting in Bendigo in spite of the harsh soil round here. 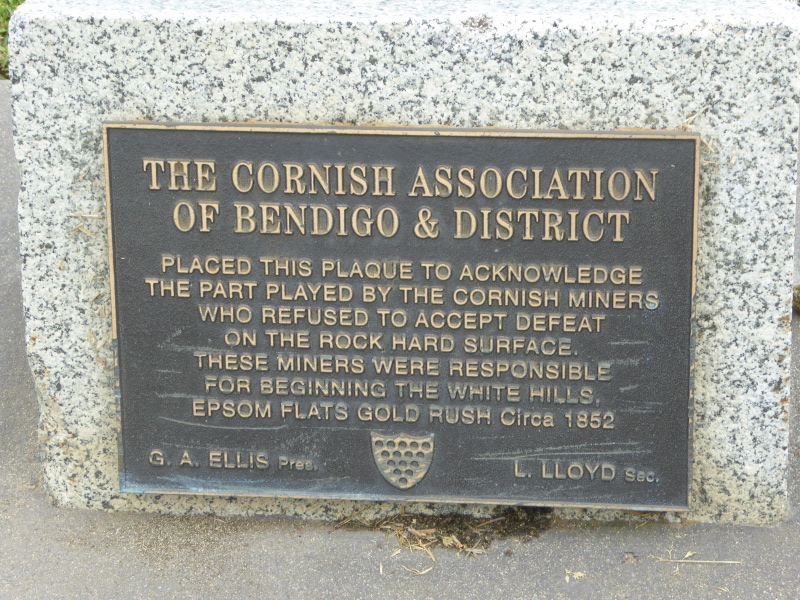 Then it was back to the ‘maze’. I think this is one of those contemplative stone set-ups, which are not exactly a place to get lost in, but are kind of nice to pace through, observing what’s around you and thinking about the space you’re in.

There were not too many of the trees mentioned in the early reviews of the Botanical gardens, though up by the main entrance stand a couple of very impressive Moreton Bay figs, and an enormous cypress. No sign, sadly, of the flame tree or the cork tree mentioned in the 1800s. 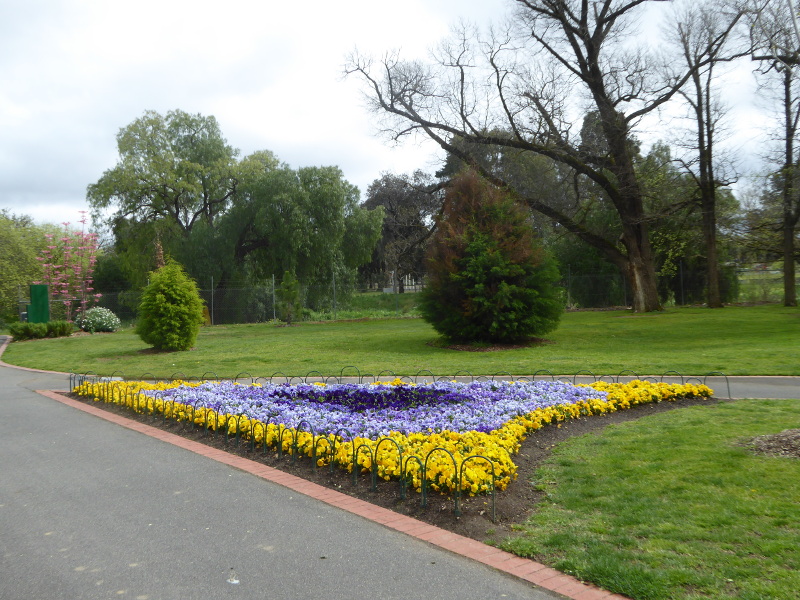 It was good to see a fair number of people in the gardens on this sunny Sunday morning, and there would be a fair few shady spots to shelter here on a hot summer’s day, too, so I think Bendigo Council have done a good job of keeping it accessible and attractive to locals. 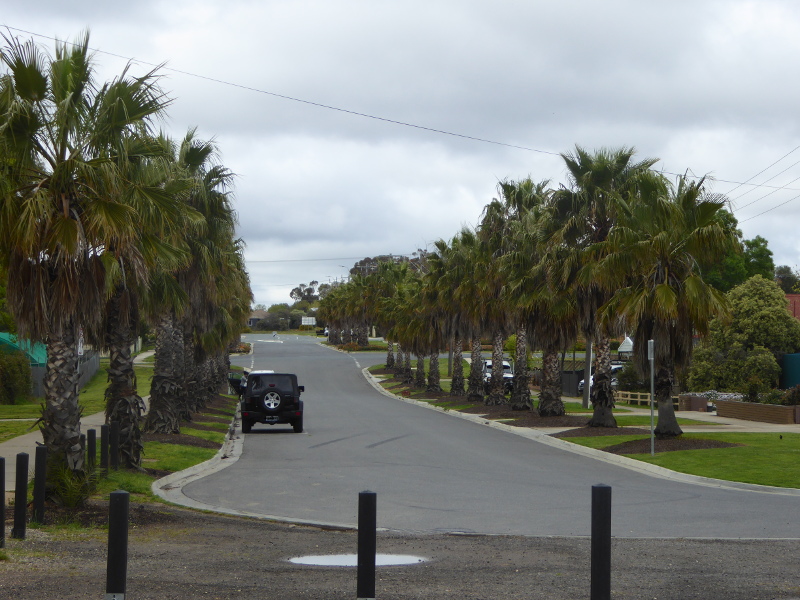 We did read that the main entrance to the gardens was switched at some point fairly early in its history, so we wondered if the palm tree-lined avenue down the side today once led to the gardens’ original way in. Does anyone local know? 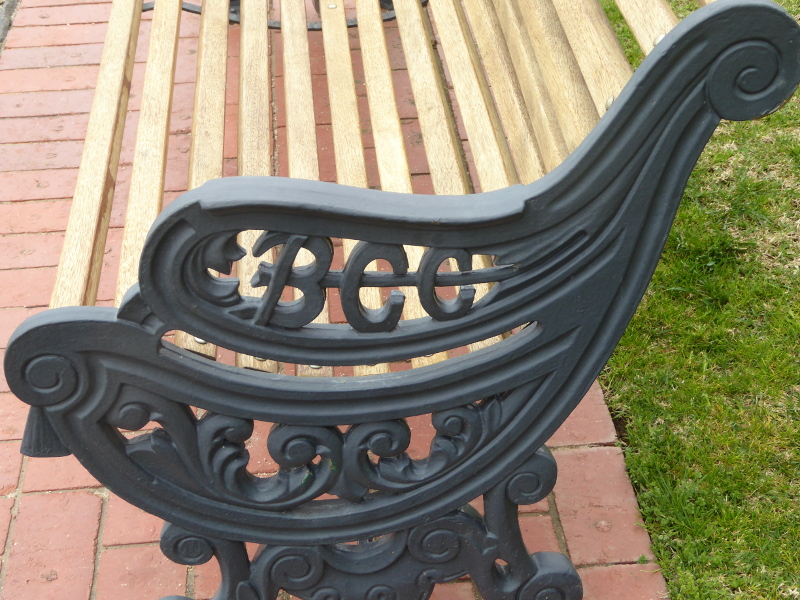 There are gates into Bendigo Botanic Gardens, so entry is not 24/7 as with some botanic gardens in Victoria. 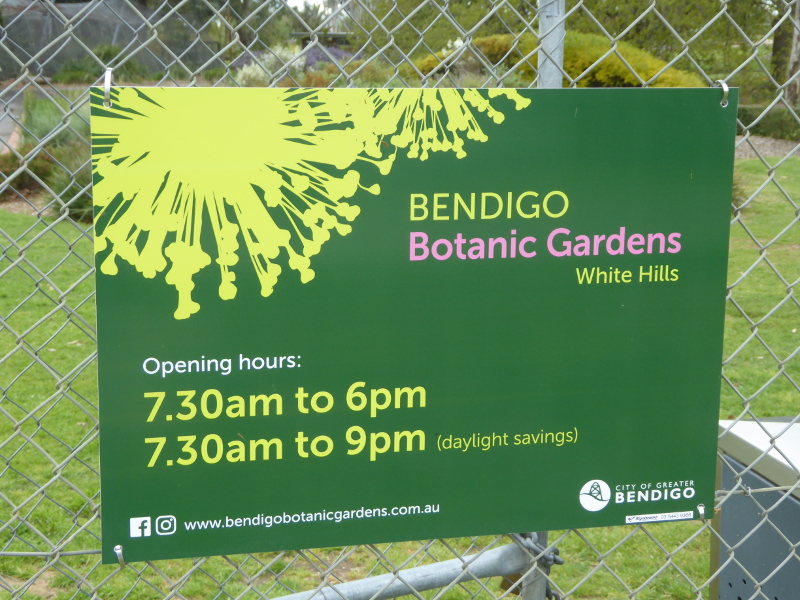 There are toilets in the gardens.

A cafe is planned in the Garden of the Future section. But not yet built at the time of posting this in December 2020.

The Bendigo Advertiser, writing some 5 years after their opening in 1857, was less than impressed at the state of the gardens: “not worthy of the name Botanic Gardens,” one editorial said. Compared to the gardens in Ballarat, the newspaper complained Bendigo’s gardens had become dilapidated. The streams flowing through the gardens were in part to blame, it was said, and the new drains had improved the vegetation enormously.

Gold was found in the gravel of the pathway when the entrance was moved from its original position. No sign of anyone trying to search for it these days, though.

In those early days, there was a boiler available for making tea for picnics; the island on the lagoon had seats and 4 swings. There were two monkeys in a menageries. And among the striking plants on display were a cork tree, a flame tree, a large bed of dahlias, and chrysanthemums.

An 1896 description in the Bendigo Independent spoke of trees from all over the world, including a species sent from Florida or Georgia (USA), called ‘magnolias’, and obviously such a novelty then that inverted commas were needed in the article. There were also Norfolk Pines and Moreton Bay Figs, so those trees in the gardens today might date from that long ago.

An 1898 visitor writing also in the Bendigo Independent was less than impressed, calling the gardens neglected and dilapidated, and saying they were barely worthy of being called ‘back gardens’, let alone Botanical Gardens. He liked the conservatory and the fernery, but the rest, well…There was a suggestion that the people of Bendigo were in part to blame: why did a daphne plant need wire netting to protect it? Did the writer see with his own eyes young ladies stealing ferns from pots?

A 1904 correspondent to the Bendigo Independent reckoned “no more pleasant retreat from the heat of summer” could be found than the Botanical Gardens in Bendigo, so some admirers had popped up by the turn of the century.

A fascinating tale of international politics and religious splits probably led to a small incident at the Bendigo Botanical Gardens in February 1918, which was probably the most drama the gardens saw in its early decades. What began with three girls making a few insulting comments aimed at picnickers in the gardens (the newspaper report didn’t specify), ended up with a large crowd hounding the girls out of the park, into the caretaker’s home until police protection could arrive and they could get to their own homes safely. The issue appeared to be matters of Irish independence and catholic/protestant splits. Apparently the three girls made insulting comments about the Catholic school badges worn by some girls in the gardens, with derogatory remarks about the then Catholic Archbishop of Melbourne Dr Mannix (an interesting character in himself, who had opposed the Easter Rising in Dublin in 1916, but by 1920 was leading Republican marches and backing Irish nationalists – at the time of the Bendigo incident he may well have been switching his own allegiances).

Writing this in 2020 I am struck by the parallels to big demonstrations and counter-marches by Black Lives Matter and then anti-maskers in Melbourne through the COVID months. In a sense those tribal differences of 1916-18 over Ireland and religion had a similar feel to the 2020 splits. How little has changed in some respects…

The Memorial Arch opened officially in 1925, and in the same year one visitor wrote of peacocks, white and turquoise, plus ducks, swans and an emu in the little menagerie with wallabies.

There seemed to be fewer big company and group outings to these Botanical gardens than to others, but the Automobile Club of Victoria held its annual gathering here in December 1931, and I’d love to see some photos of that event if anybody has any?

As usual the articles in Trove dry up around the 1950s so I have no further tales to tell, unless some locals can fill me in on stories for those missing years.

What are your experiences at Bendigo Botanic Gardens?

Does anyone know whether the palm tree-lined avenue running next to the gardens today once led straight to the gardens’ entrance in the nineteenth century?

Has anybody seen photos of the 1931 Automobile Club of Victoria picnic in Bendigo Botanic Gardens?

Or does anyone just have a good memory about a visit to Bendigo Botanic Gardens that they’d like to share here?

Other links and writings on the Bendigo Botanic Gardens

The AnyDayAdventures blog visited Bendigo Botanic Gardens in 2017 – lots of tips if you go with kids here.

Trevor’s Travels blog came here in 2010 and was a little underwhelmed. I think the place has improved since then except maybe in the aviary cages

Things had begun to improve by the time of this Jones Family History blogger’s visit in 2013.

The Touring Wombats travel bloggers timed their visit to the gardens for good rose displays in 2019.

Local newspaper the Bendigo Advertiser shows designs for the new café and visitor centre in the botanic gardens. Not built yet by the time of our visit in November 2020 but a glimpse of what’s to come…

Really nice video on the Explore Bendigo YouTube page all about the botanic gardens – made around the same time as our own visit.