England’s touring cricketers played Country Victoria on the oval in Benalla Botanical Gardens in 1937. You could watch the game from the bandstand which still stands today.

We visited Benalla Botanic Gardens on a steamy hot Sunday in the middle of the afternoon. Even the shady areas felt warm as spring shifted into summer. 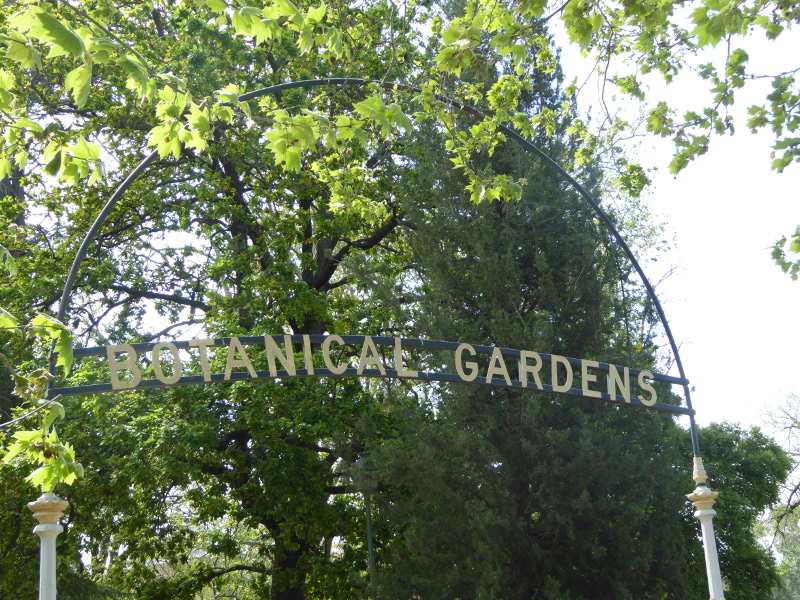 There was a smattering of other visitors in the grounds, a rather nice 30th birthday party bringing a group of women together for what looked like a sumptuous picnic, but no activity on any of the sports fields dotted in and around the Gardens: the bowling greens, the tennis courts, or the cricket oval. 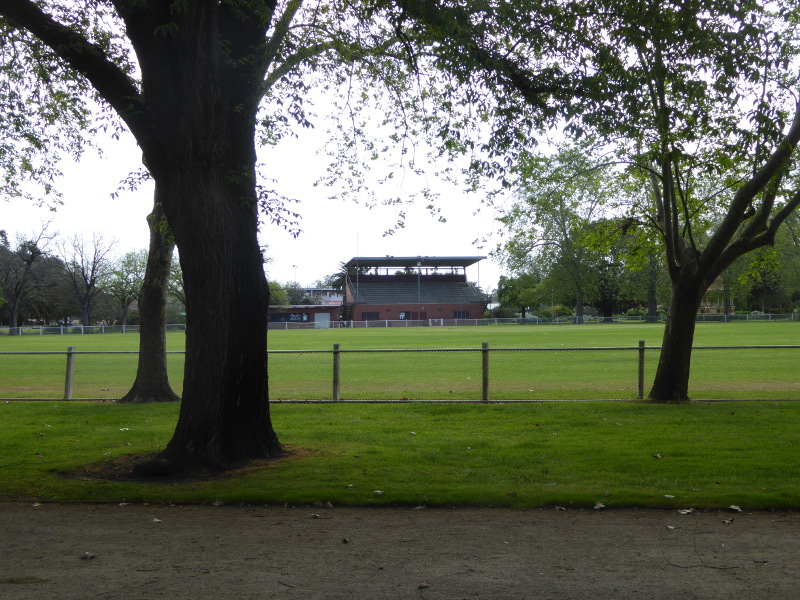 That oval is still the centrepiece of Benalla’s Botanic Garden today, with the bandstand rotunda not far away across the lawn beside it. 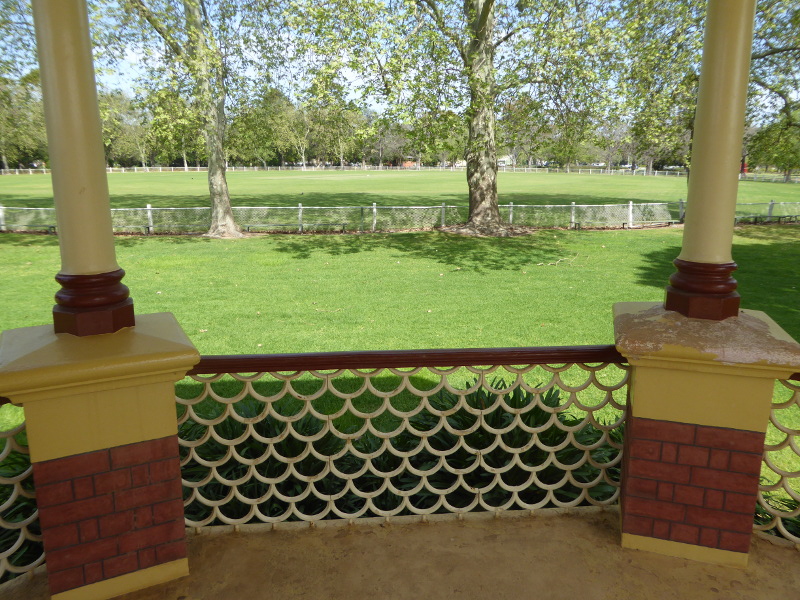 The grandstand was built in the 1960s, so would not have held spectators when the England cricketers played here in 1937 (see stories below), but they would have had the rotunda in view as they played, and it must indeed have been a picturesque venue for a touring side. 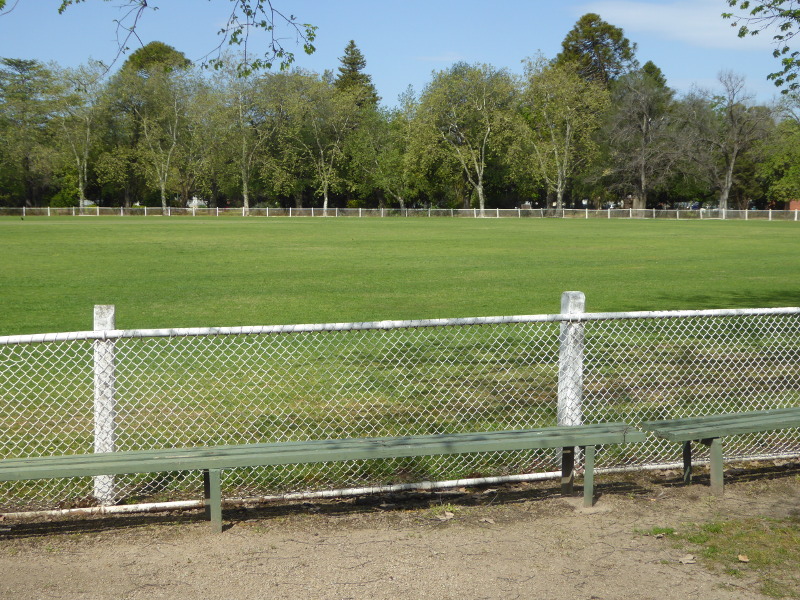 I wondered if the benches all around the playing area dated from so long ago for those lucky locals able to watch international cricket stars of that era? 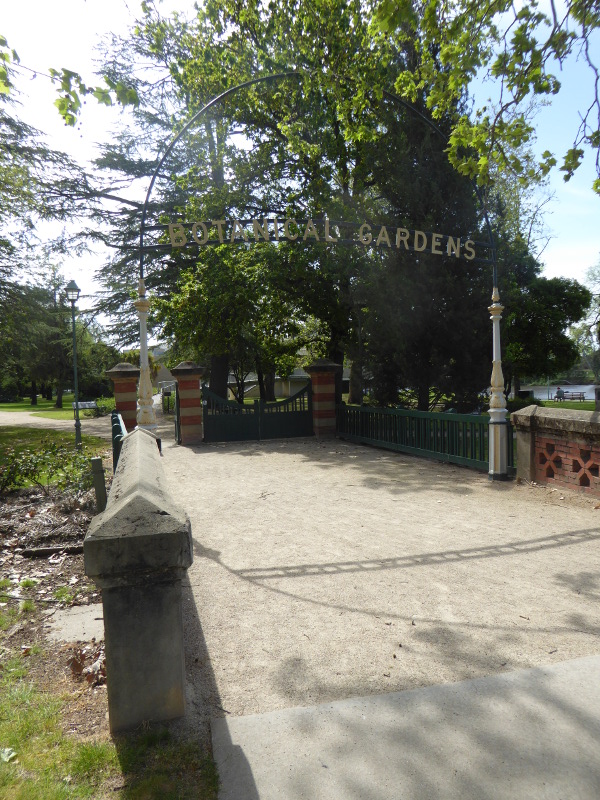 The entrance to the Gardens dates from 1911, as does the bandstand. 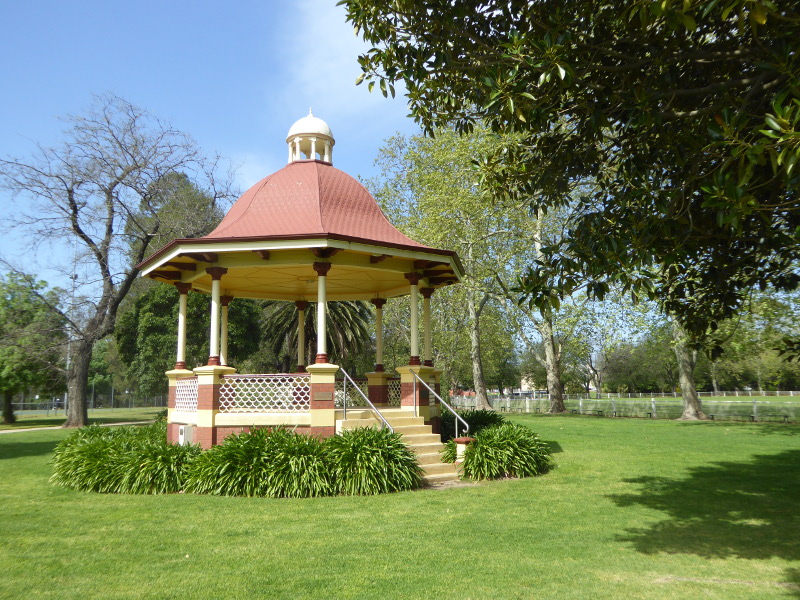 If, like me, you are also a fan of vintage lamp posts, make sure you have a good look at the lamp by the garden gates, as most of the other lamp-post bases around the gardens no longer have their lamps attached. 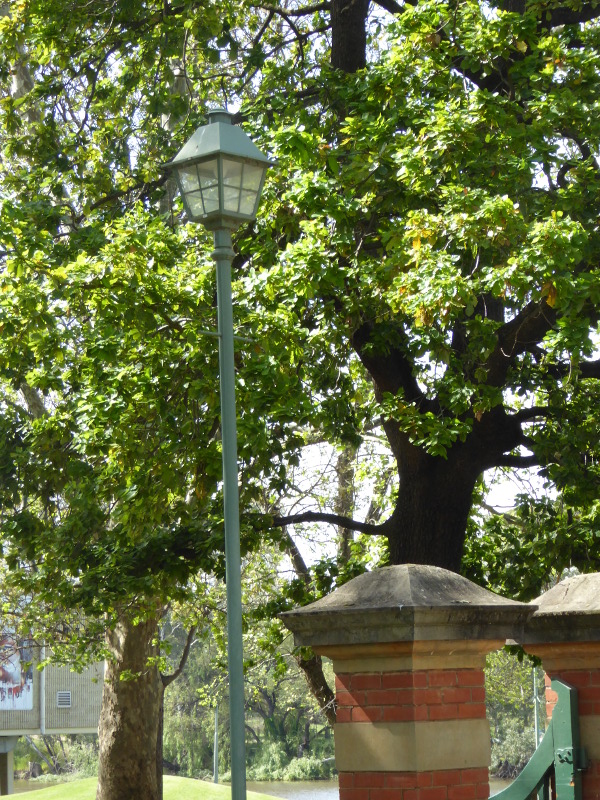 But does anyone know the significance of the tulip image on the ironwork of the lamps and some benches? An old Benalla town motif? If so, why? 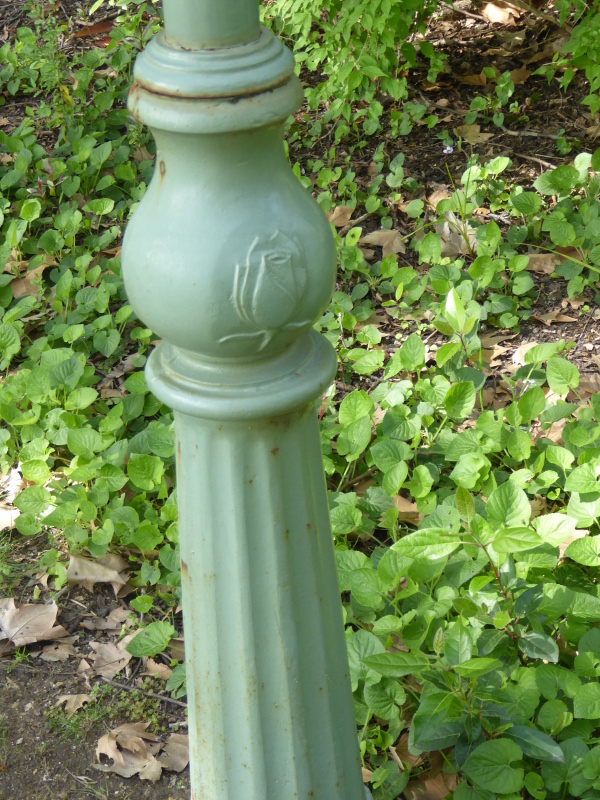 The vintage benches dotted round the gardens are a delight – the ironwork bearing the Furphy name more familiar these days for its beer. 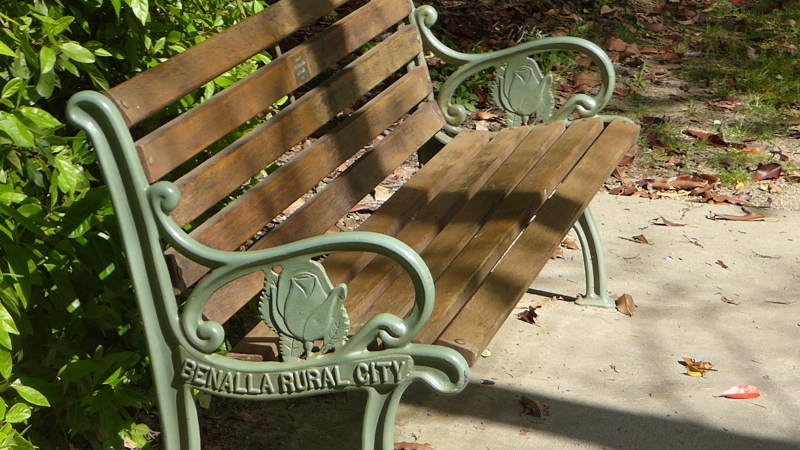 There are also fewer ancient trees than in many other botanic gardens in Victoria. But by the sound of the history of this place, that’s in part because sports and recreation were always as important as the horticulture here. 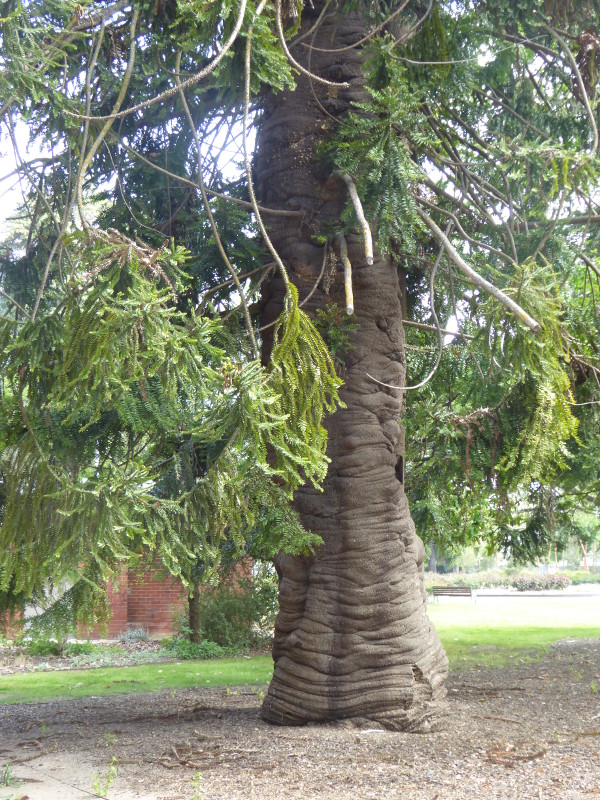 A few trees did catch my attention, though. I rather liked the warning signs under some of the spikier-leaved trees, cautioning the passer-by not to dwell too long underneath the branches in summer or autumn, presumably so as not to have spiky leaves stab you in the skull… 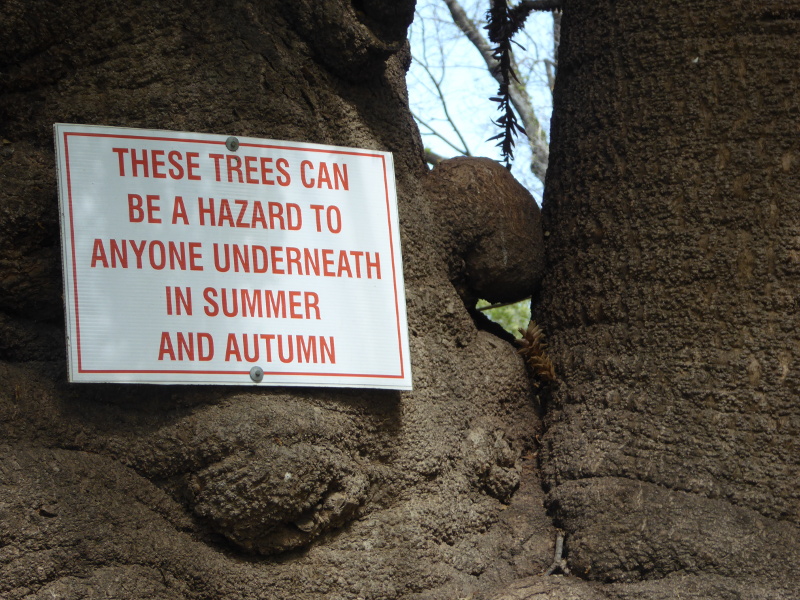 I was intrigued by the Algerian oaks, which looked a lot like traditional English oaks, but appeared not to have shed their leaves through the winter, as they were all in full foliage still on this early spring day. 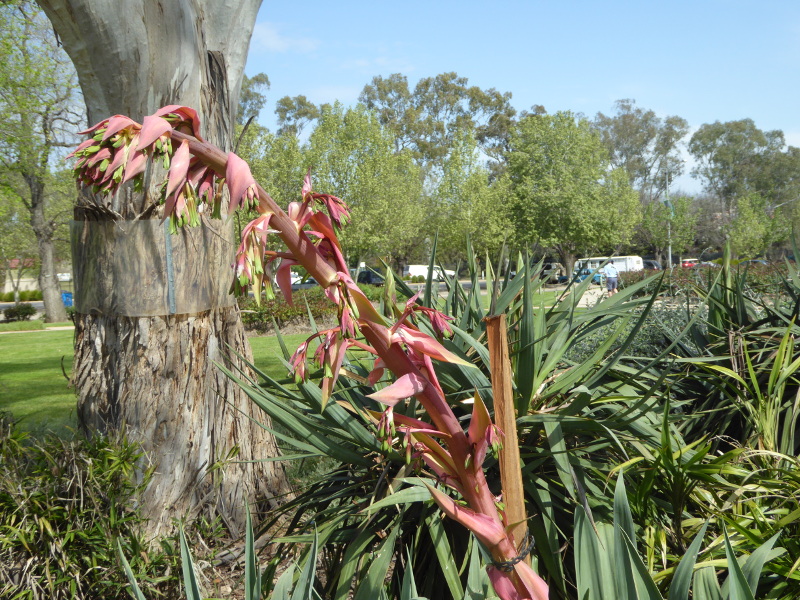 And it was a delight to find a couple of Dutch Elms still doing well in the Benalla Botanic Gardens, as I thought the vast majority of those across the world died of the same-named disease when I was still a child in the 1970s. 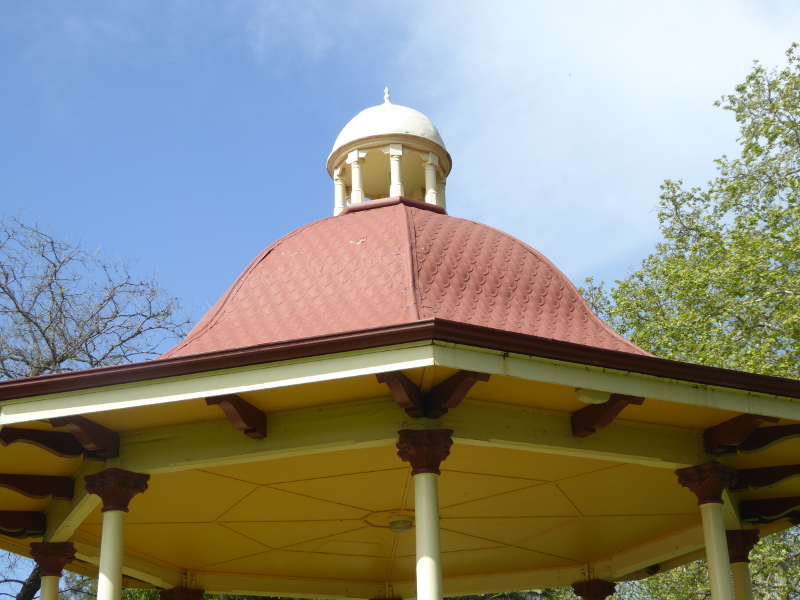 Bandstands like these always look impressive, and it’s such a shame they see so little music these days. 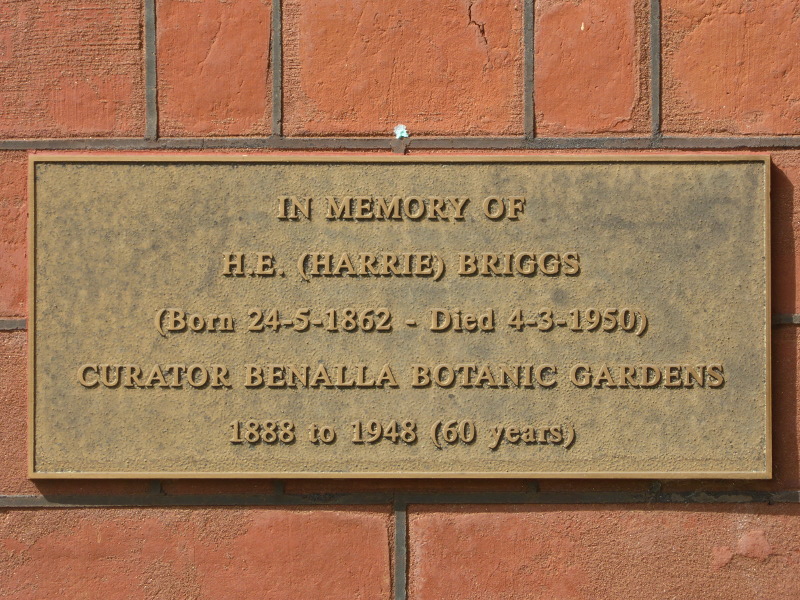 It was nice, though, to see this structure dedicated to the head curator of the gardens, one Mr Harrie Briggs, who managed the gardens for over half a century, starting not long after they opened in 1886. 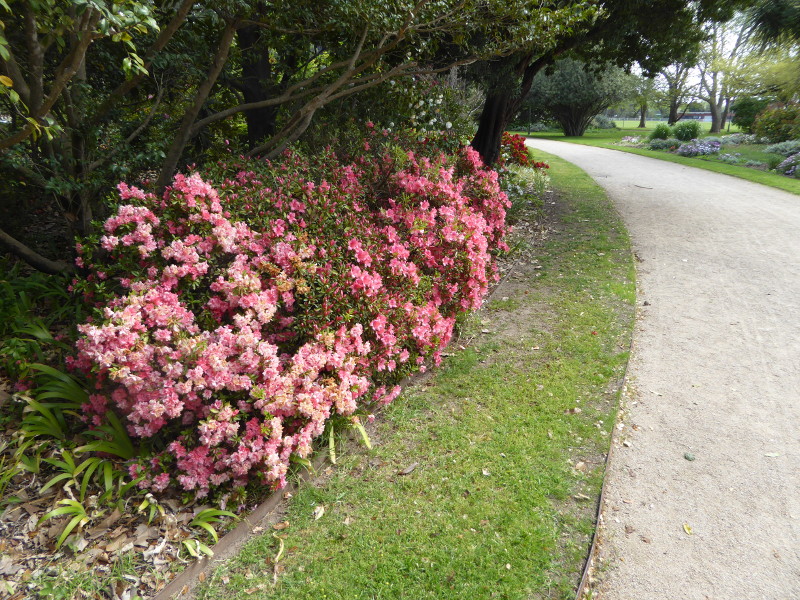 It was too early in the year for some of the flower beds to be at their best – the roses, for example, not yet in bloom – but some plants were resplendent in their colours, while others leaned over the paths in what we always call a ‘triffid’-like manner. 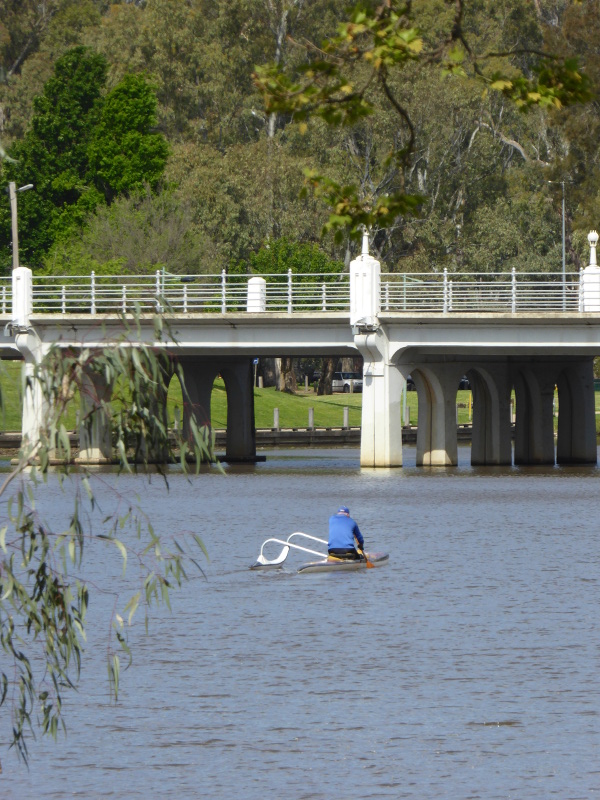 The lake and river sit right next to the tennis courts on one side of the Gardens, with the occasional kayaker, or other small boat cruising slowly past, and towards the beautiful bridge that takes you into the heart of Benalla. 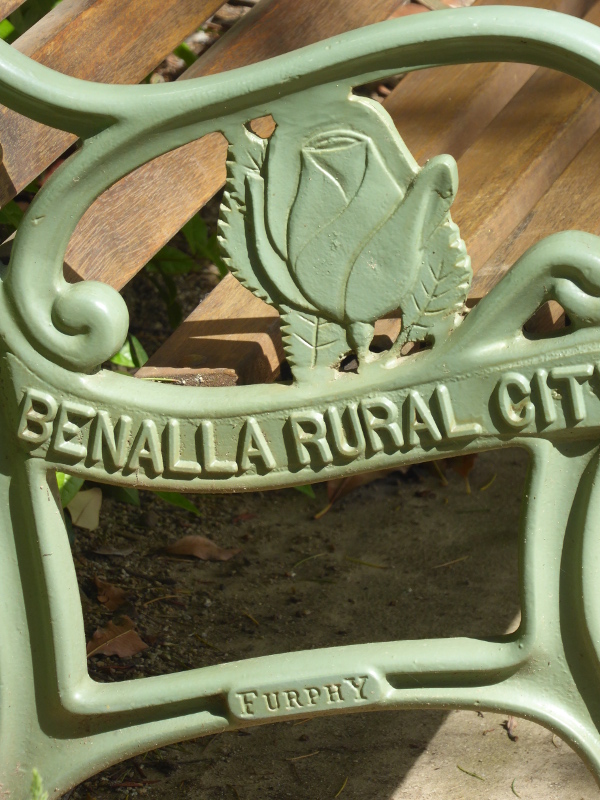 Benalla Botanic Gardens won’t take you too long to explore, unless maybe you happen to be there when some sporting activity is actually taking place.

They do add to Benalla’s attractions as a place to stop off, though, and we’d certainly be back with our sandwiches on a future long-distance drive, on which Benalla has in the past merely been the place we pause to buy our lunch and drive on. A stroll over the bridge into the Gardens is well worth it.

As far as we could tell the Botanic Gardens in Benalla are open 24/7, with no obvious gates that could be locked or shut.

There are toilets in the gardens, by the main road, close to where we ended up parking. 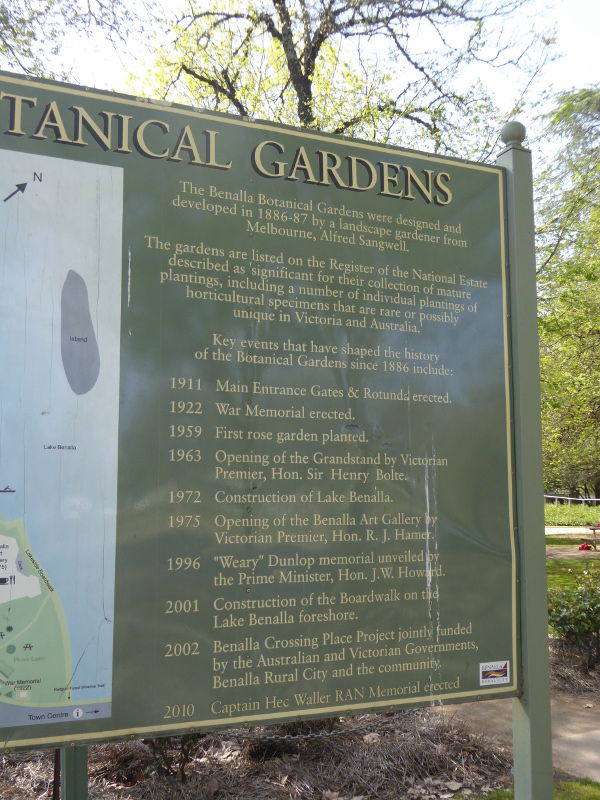 By 1899 there were press complaints that a ‘certain class’ of person locally spends idle hours whittling away at the wood of the gardens’ gates. Action needed to stop this…

In 1929 there was more local criticism, this time of the ‘wanton plucking of flowers,’ notably by a young girl caught in the act and having three blooms in her possession as she walked from the gardens. “Parents should drive home the lesson that plants…are not to be interfered with,” boomed the Benalla Standard editorial.

The Gardens were well-used in those days for sports events or ‘lolling’ about on the ‘willow-clad banks of the river’; the croquet lawns were moved and the new ones officially opened in October 1929, with the local paper claiming a Melbourne architect had called them ‘equal to any in the metropolitan area’

A 1930 letter to the Standard complained at the public being asked to pay to enter the gardens when they already pay for them through the rates. I’m not sure when that changed?

Brass bands played in the gardens to raise funds for over-subscribed hospitals due to illness linked to the Depression and the epidemic (??) in the early 1930s.

In 1937 there was the biggest event ever held on the cricket oval in the middle of the gardens. England cricketers on tour played Country Victoria, surrounded by Botanic Gardens trees. There were also 24 tennis courts in those days. Later England captain and a name even I have heard of from my youth, Wally Hammond, made 50 batting for the visitors on the Benalla Oval that day. 2000 spectators watched around the oval that morning.

Melbourne Conservatorium orchestra and choir performed in the gardens in 1941. The concert was so successful that they did a whole encore, repeating the event a few days later. It was the first time this group of musicians had performed outside Melbourne. 75 musicians, 1,000 in the audience.

Handing the bouquets out at the end was one H. Briggs, who had curated the gardens for 50 years by 1941. Assistant curator a year after they opened aged 24. 82 years old when retired; died aged 87 in 1950. The visit of the English cricket team and their compliments on the state of the pitch in the gardens were a highlight of the obituary in the local newspaper.

Mr Briggs resigned amid controversy as the Council had decided to reduce staff at the gardens to one employee, so he stood down on principle after 58 years in the job. He had been curator since 1887 (till February 1945) – The ‘Grand Old Man of Gardening’ in Australia. He died five years after retiring, aged 92.

There was a 1951 report of a concert in the gardens but Trove has nothing after that. Any later events people can recall attending?

What are your experiences at Benalla Botanical Gardens?

Stories on Benalla Botanical Gardens on the Trove database stopped in the early 1950s. So if anyone has a tale to tell about anything linked to the Gardens after 1951, please get in touch.

I don’t suppose anybody remembers the old curator Mr Briggs, who died in 1950?

Can anyone fill me in on the story behind the tulip motif on the vintage ironwork from the Benalla Council?

Or does anyone just have a good memory about a visit to Benalla Botanical Gardens that they’d like to share here, even from the last few months or years?

Other links and writings on the Benalla Botanical Gardens

This is the Victoria Heritage Database entry on the Benalla Botanical Gardens.

Enjoy Benalla tourism site on the gardens’ rose garden, planted in 1959, but not in bloom during our visit.

This sculpture I didn’t prioritise but these bloggers Jan and Graham loved it.

Shepparton News on the 2020 grant for the Benalls Botanical Gardens.