Another palatial art deco cinema in the Melbourne suburb of Balwyn. Opened in 1930, and still showing a great mix of films today.

We came to the Balwyn Theatre during the German Film Festival, so had a double treat with this art deco cinema and an excellent movie to watch as well. 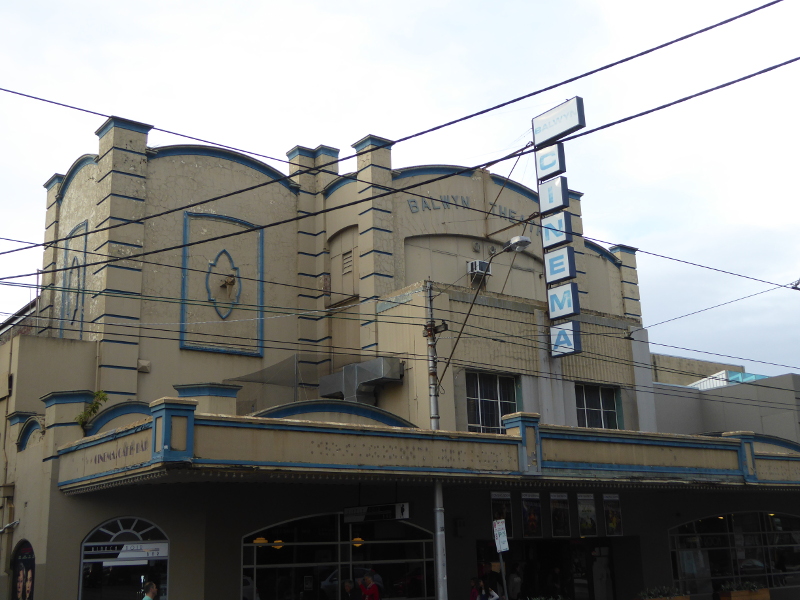 The last time we had tried to go to a German Film Festival was in London a few years ago. We turned up on spec thinking ‘nobody rushes to see German language films, surely’, but it was sold out that night. The film we saw at the Balwyn was certainly not sold out, even though it actually ticked a lot of Aussie boxes, being about a footballer (round ball variety) who became famous in my own youth for playing on in a cup final after breaking his neck.

It felt very appropriate for Vintage Victoria to be watching a period drama set mostly in the 1940s and 50s in a cinema that was in its heyday in those years. We thoroughly enjoyed the experience. 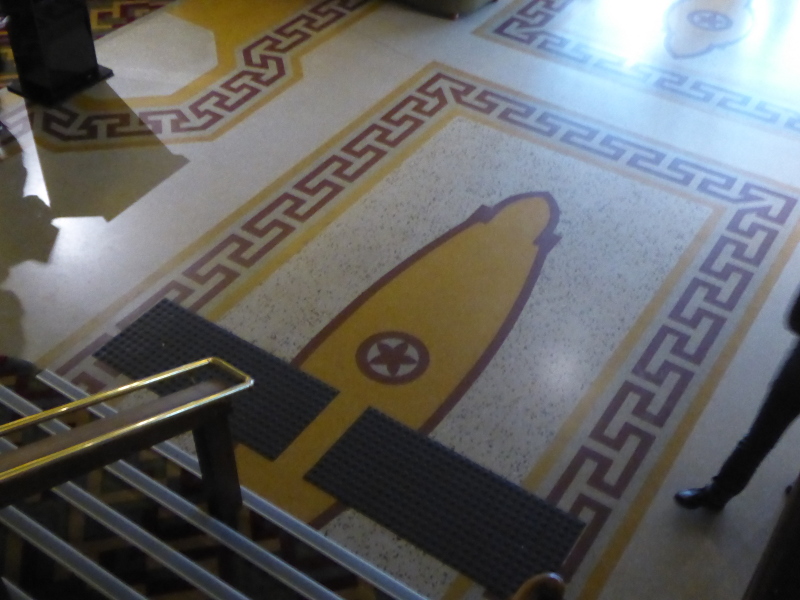 Balwyn is quite a gentrified area these days, certainly compared to the early years of this cinema, as my history section here shows. And it’s really not too far from other vintage cinemas I have reviewed here like Camberwell or even Windsor, so it does well to keep going in the current Netflix world.

Of course what used to be a massive single screen palace is now part of the Palace Cinemas chain, but to keep it viable, they have 11 screens now. I’m all for such changes as long as they keep some of the original features, especially as it allows managers to show a range of films from the big budget movies to the arthouse stuff we usually go to. 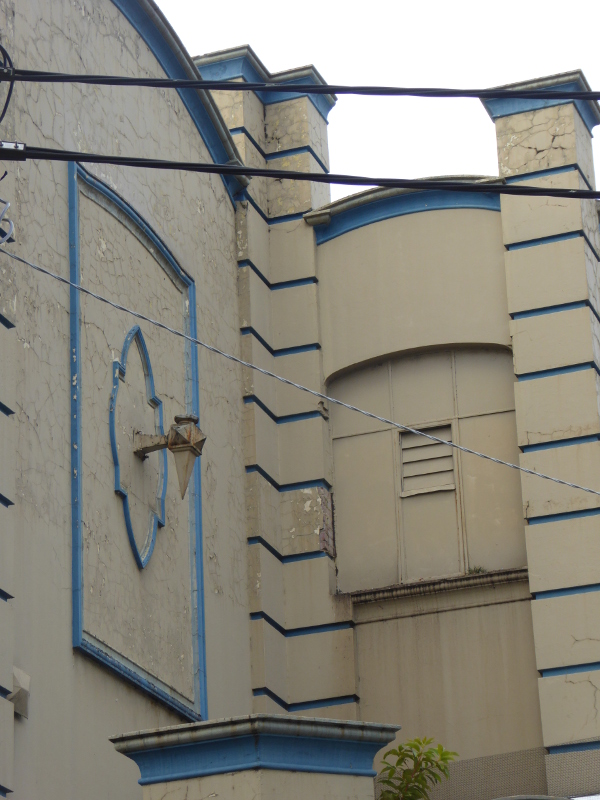 The exterior of the Balwyn Theatre is still palatial, though. I rather liked the tired look of the outside, with its flaky paintwork a proof that this place has seen a fair few decades of life on the Whitehorse Road. 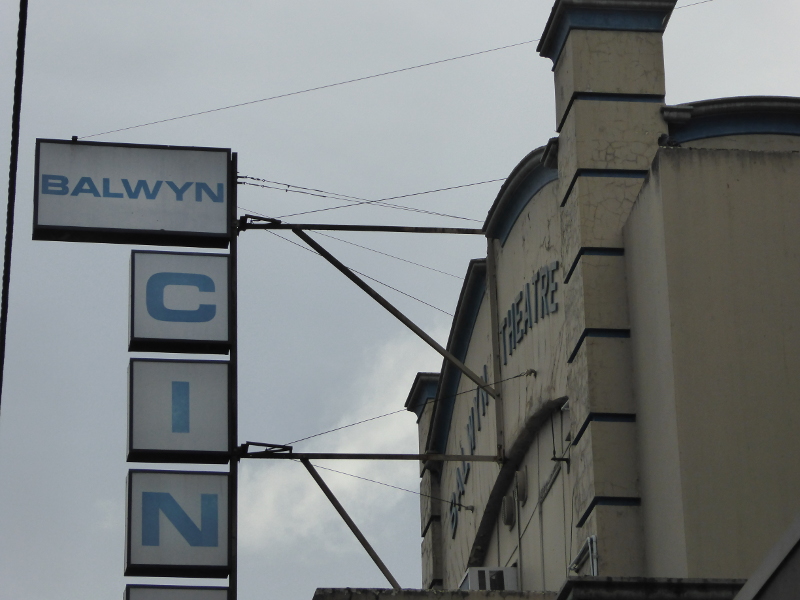 Apparently, there was (is?) some controversy over the 1970s-looking signage that runs vertically down the top front with the name Balwyn Cinema, with some traditionalists wanting a return to the simple original façade, but I think the whole look works, even with the more modern art-deco style Palace Balwyn written over on the newer section to the right. 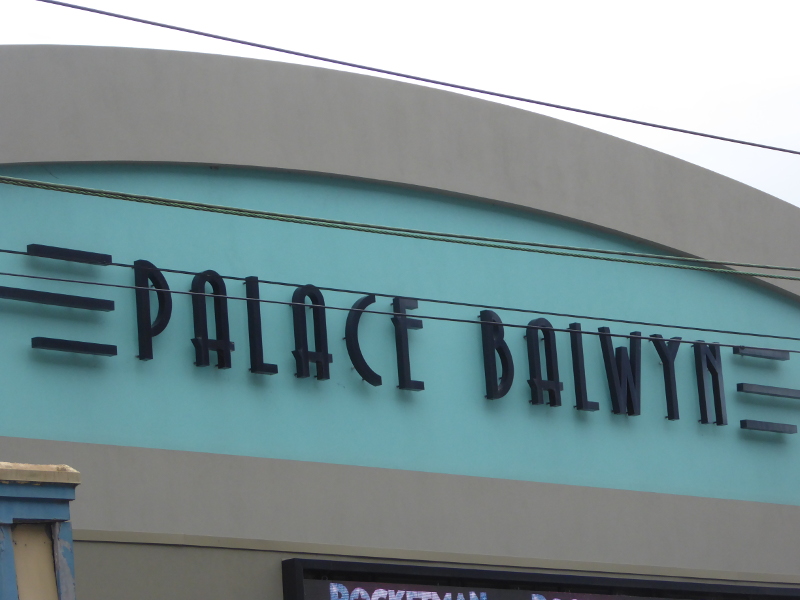 Inside you have the classic entrance foyer, with beautiful tiled floors leading to a main staircase up to some of the screens now, but which once would have taken you up to the dress circle. It’s not as grand as the staircase at the Rivoli in Camberwell, but has some nice angles and lines nonetheless. 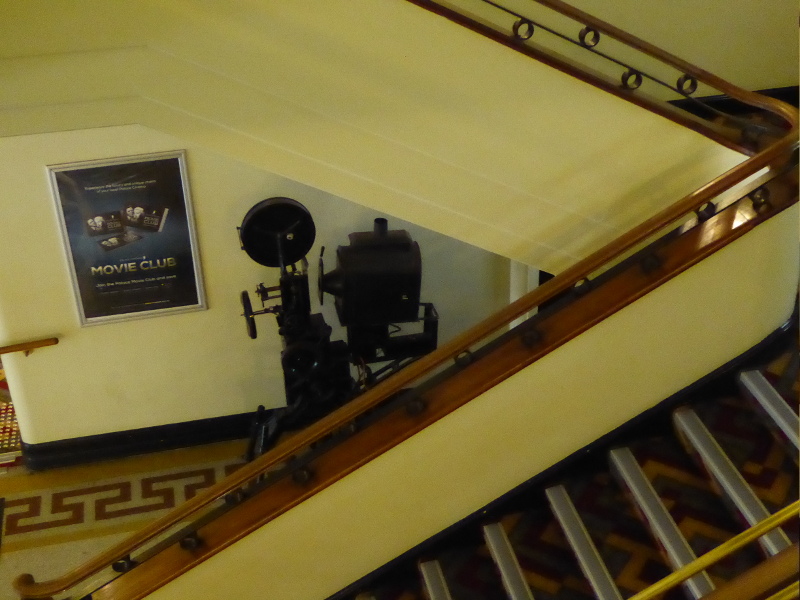 The lighting is – as so often in these vintage cinemas – lovely. I don’t know whether any of the fittings are original still, as it looks as if the interior of the Balwyn has had a pretty thorough overhaul, but I loved the hexagon of the lights in the foyer 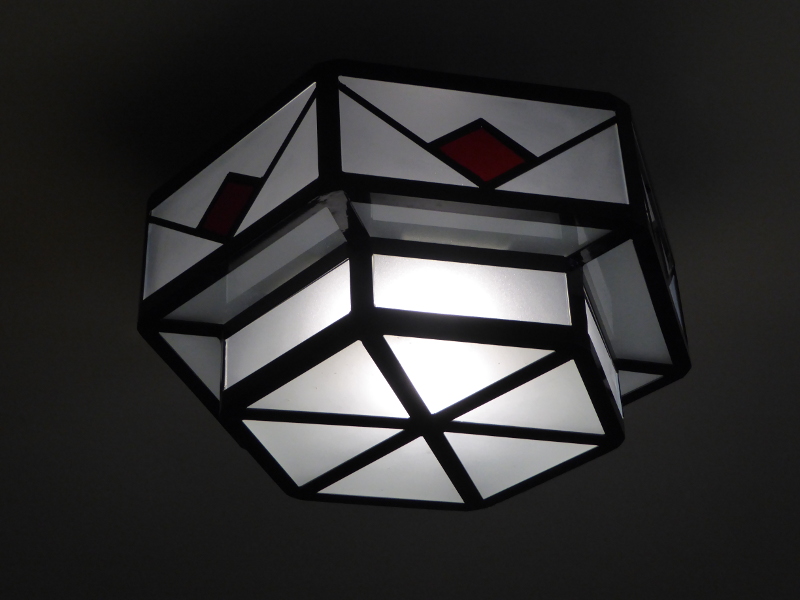 And the more gothic – but almost certainly new – lights in the cinema we attended upstairs. 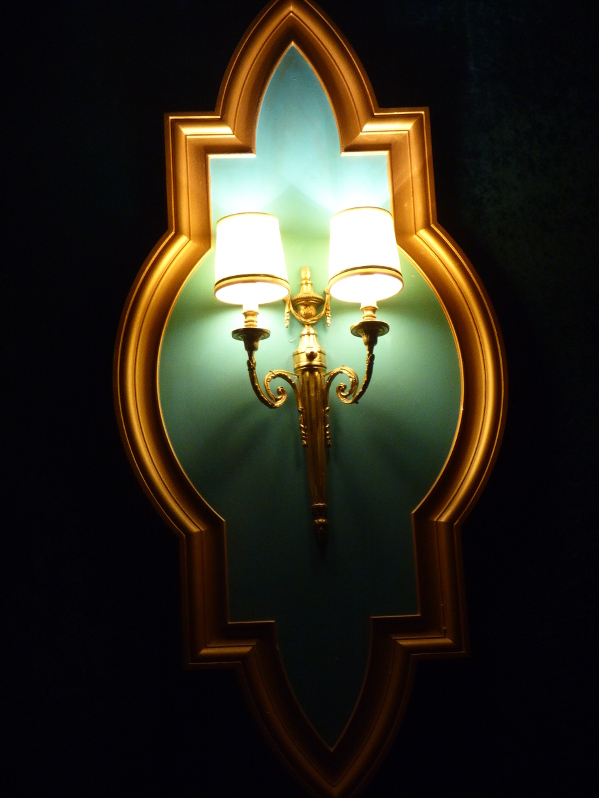 Balwyn Theatre also does a really good line in coffee and sandwiches, served very quickly and promptly so that we had time to wolf it down in the 15 minutes we had to spare before our matinee film began. 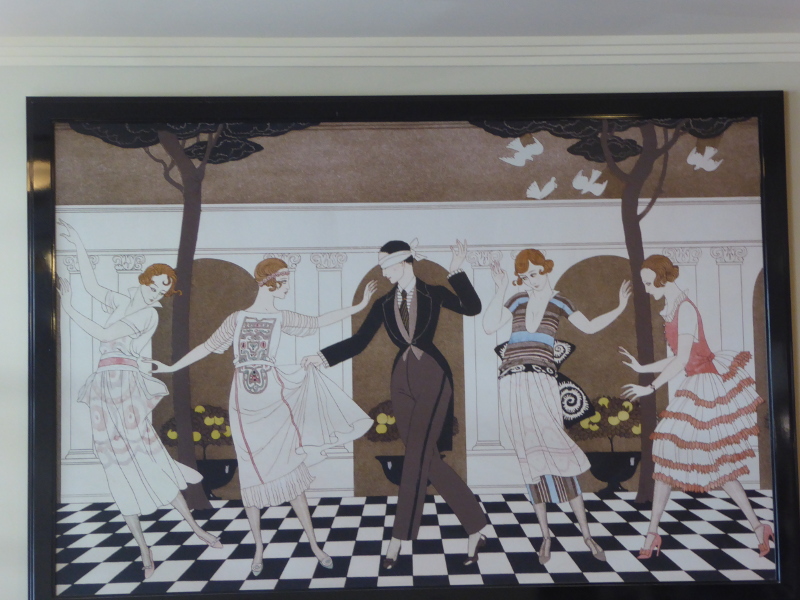 And the café has a lovely vintage feel as well, with some great artwork giving that 20s/30s feel you need to make it a true vintage experience. So, overall, a really exceptionally good place, and once again makes us wonder if we should have bought a little unit near here instead of out in the country where we are today…

History and stories about the Balwyn Theatre

When the cinema opened in February 1930, there was a lovely article in The Herald to announce the place. It was the brainchild of one W. Edmonds, who defied the laughter of locals saying his idea was “much too extravagant for the needs of Balwyn”.

It could seat 1800 in a single auditorium back in those early days. And was the biggest suburban cinema in Melbourne, except for the Astor in St Kilda/Windsor. The reporter’s first impressions were of “space, color and luxury”. There were black wood doors to the stalls and a sweeping staircase up to the dress circle, where you could sit in one of the 200 ‘lounge chairs’, with double seats at the end of each row, usually booked by a ‘young Romeo’ on a date… The acoustics were crystal clear and the Balwyn was the first suburban theatre to cater for wide-screen films.

A Maurice Chevalier film, Innocents of Paris, featured on the opening night, and the managers were keen to stress that the cinema would only be showing films of this kind of standard in the future, too.

The oil company Shell supplied the oil used to heat the Balwyn Theatre, putting it on a par with illustrious buildings like Canterbury Cathedral and St John’s College, Oxford, said the company press release…

Balwyn Theatre was soon the victim of Melbourne’s crime wave in the 30s, though. A gang broke into the theatre in June 1930 and set fire to the curtains and stage fittings after ransacking the manager’s office and stealing beer, whisky, cigars and cigarettes. Police reckoned the fire might have been lit in frustration at finding no money. A neighbour in the house next door set the alarm and the local fire brigade saved the theatre as a whole from burning down just weeks after opening.

There was another break-in some years later, in 1947, this time the police getting there in good time, with a gunshot pursuit in and around the theatre, with one man arrested in the downstairs stalls. They had put gelignite in the key hole of the theatre safe and clearly planned an explosive entry. Four were arrested the same day, and a fifth a few days later in a street incident which reminded me of a 1970s Z Cars (UK equivalent of Homicide in Australia). The fifth man later died in hospital, though not from gunshot wounds – it was his barefoot escape from the Balwyn Theatre which was his downfall, contracting tetanus from a cut in the foot.

And an armed gang stole money from a cash till at the theatre in 1953, so news of violent gangs around Melbourne is nothing new, though you wouldn’t believe it from some of the 2019 news reports recently…

Other links and writings on the Balwyn Theatre

The Cinema Treasures website has an entry on the Balwyn Theatre. I loved the comment from one reader telling that the cinema had to close for some months over 1931-32 because it had failed some public health inspections. Nothing on that in Trove, though apparently the owners went into liquidation at the time.

The Discover Your Own Backyard website has an entry on Balwyn, with only a brief mention of the cinema, but lots of ideas on what to do in the area before or after the film.

This Herald Sun article from 2015 discusses renovations of the Balwyn, with some historical references too.

In 2016, parking near the Balwyn Theatre became a news story when the Herald Sun covered it.

What are your memories of the Balwyn Theatre (or cinema)?

Is there anybody still around today who can remember those break-ins at the Balwyn in the 1940s and 50s? Or do you recall a more recent incident to add here?

What’s your favourite thing about the Balwyn? What’s the best film you’ve seen there? Or the biggest audience you have sat among?

Did anybody ever sit in those double sofas in the Dress Circle on a ‘Romeo’ date, or hear their grandparents tell the tale?

For once we would recommend coffee or tea in the cinema café. These in-house places don’t usually do a good enough quality cuppa for us, but at the Balwyn it’s a really good experience, with quality coffee and great décor. So we didn’t try any other coffee shops in Balwyn this time.