This art deco brick palace opened its doors in 1936. It is one of the last remaining vintage cinemas still showing film on a single screen. Shows old classics and new releases.

I’d admired the Astor Theatre from outside on numerous occasions before I finally found a film I wanted to see, showing at a time I could make. So, I was very excited to see that Casablanca was set for a Sunday matinee on a weekend I’d be on my own anyway. This would make for perfect Vintage Victoria material: a vintage pic in a really vintage cinema. 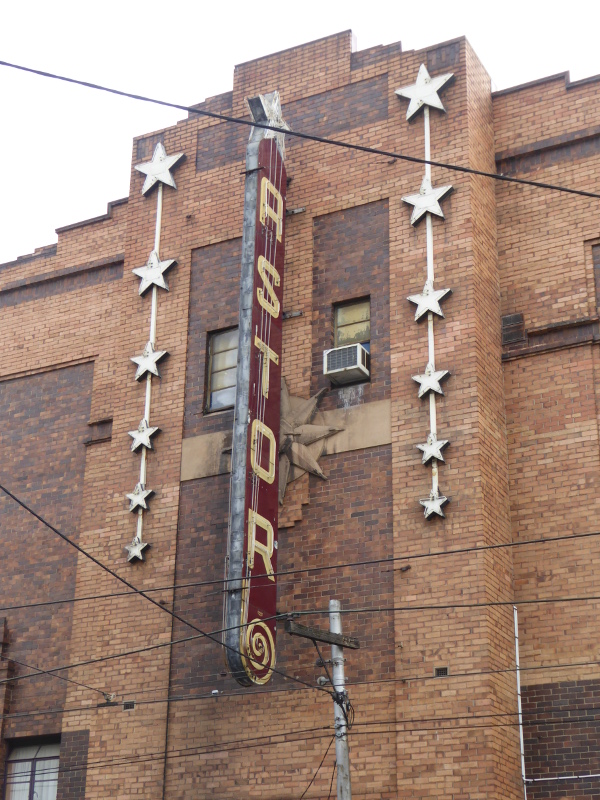 The Astor is a big, solid brick palace on a busy corner where Chapel Street meets the Princes Highway, coming down from Dandenong. 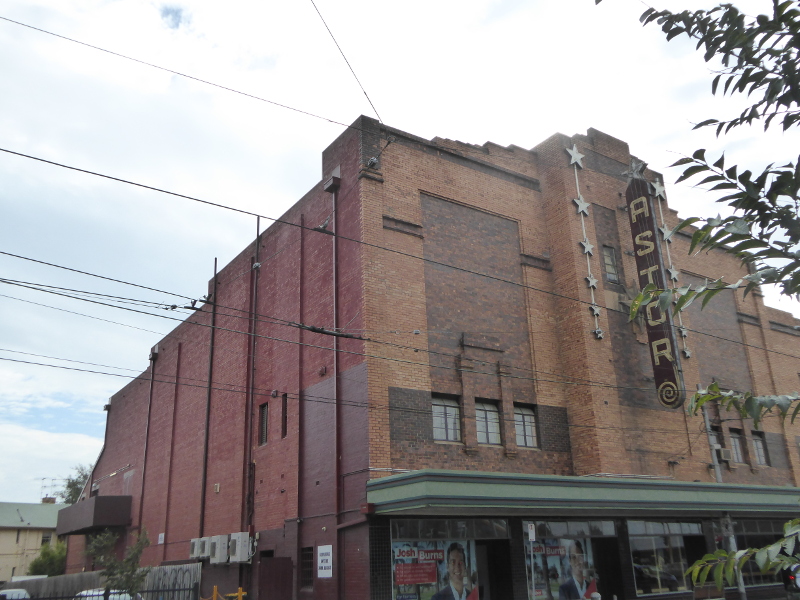 Inside, it’s still a single screen cinema, with seating on two levels in the old stalls and dress circle format. 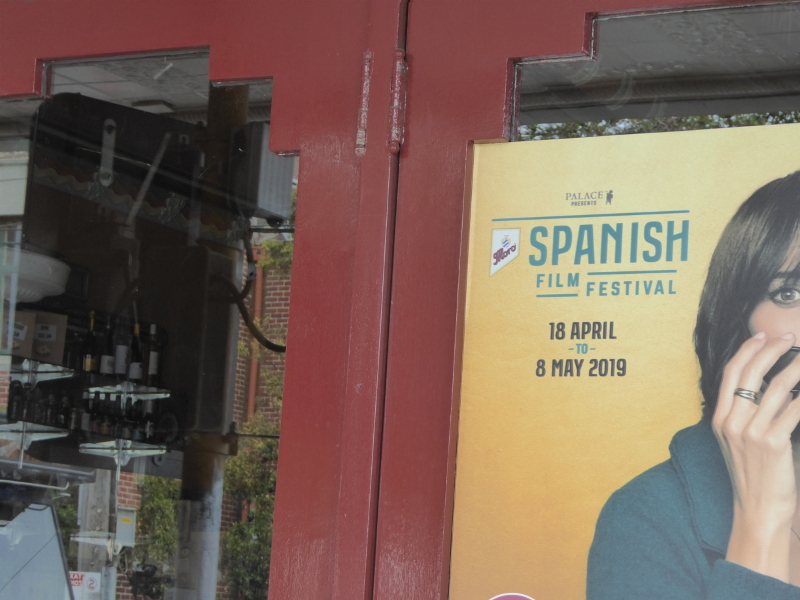 It’s often used as a venue in various film festivals: Melbourne’s MIFF; Spanish Film Festival, French Film Festival; it often shows new releases on long runs (this was part of my problem finding a screen time I could manage, especially if I didn’t fancy the film showing for a few weeks in a row); but it also has the tradition of showing classic movies. 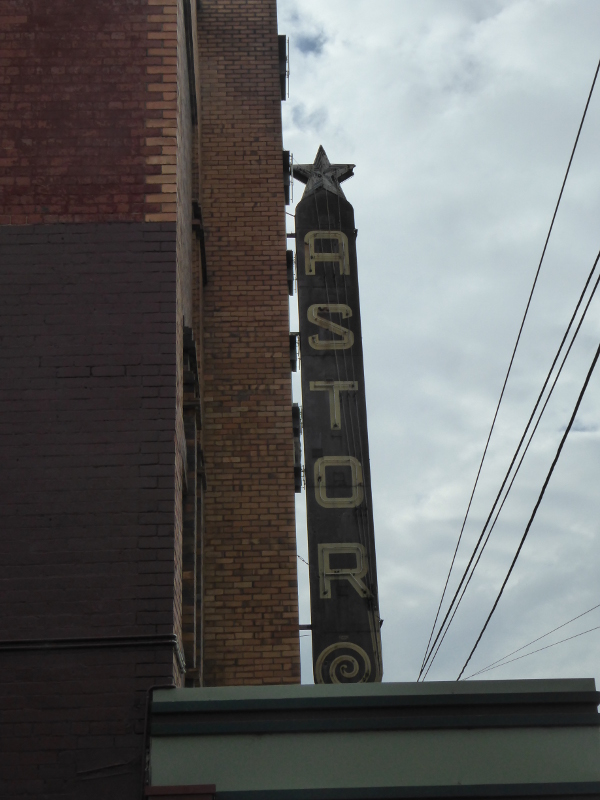 And I had no idea until I got to the Astor on this Sunday afternoon in January, just how popular these classic film session s can be. So, Casablanca is over 75 years old, and yet I head-counted more than 200 people in the dress circle with me as the film got close to starting. A real range of ages, too. Some were young enough for me to imagine this must be their first time seeing Casablanca; others were probably like me watching it for about the fifth time; and it’s a good enough film for me to imagine that some zealots have seen it a dozen times already. But this was my first time seeing it on the big screen, and the Astor certainly is big.

Let’s start back outside the Astor, though. 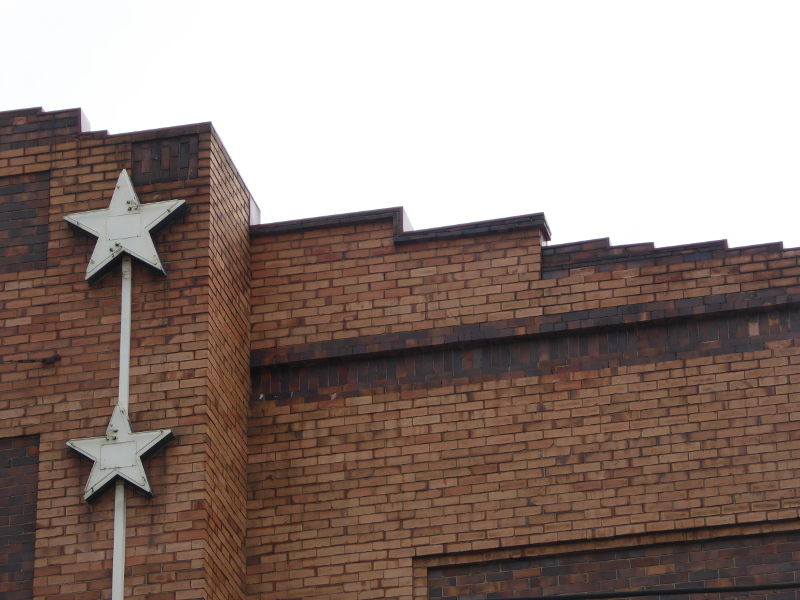 Being built in 1936, the Astor is quite late art deco, but the frontage has a few deco flourishes, both at the top of the facade, and in the start motif (partly covered by the Astor name, but then picked up in the more modern stars that run vertically down parallel to that neon-lit name. 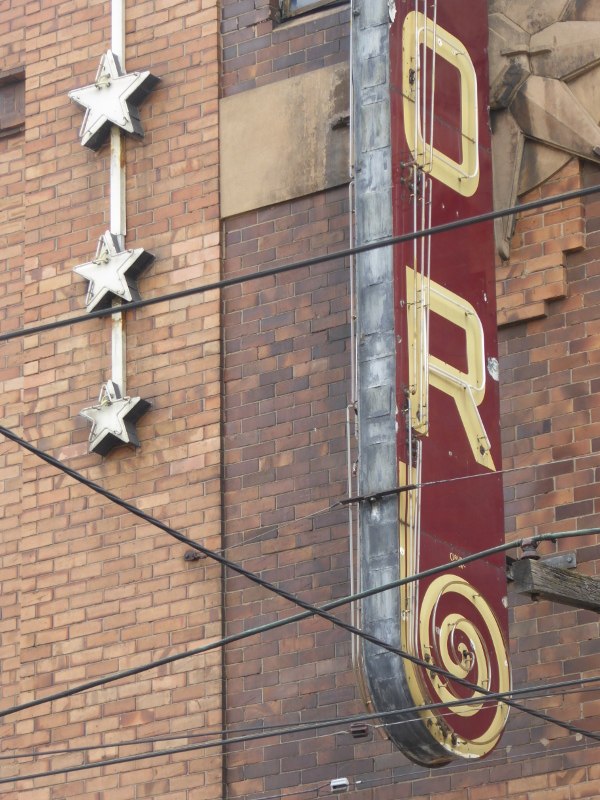 And they’ve kept the vintage feel in old lettering at the front, where new and old posters advertise what’s been before and what’s about to arrive at the Astor. 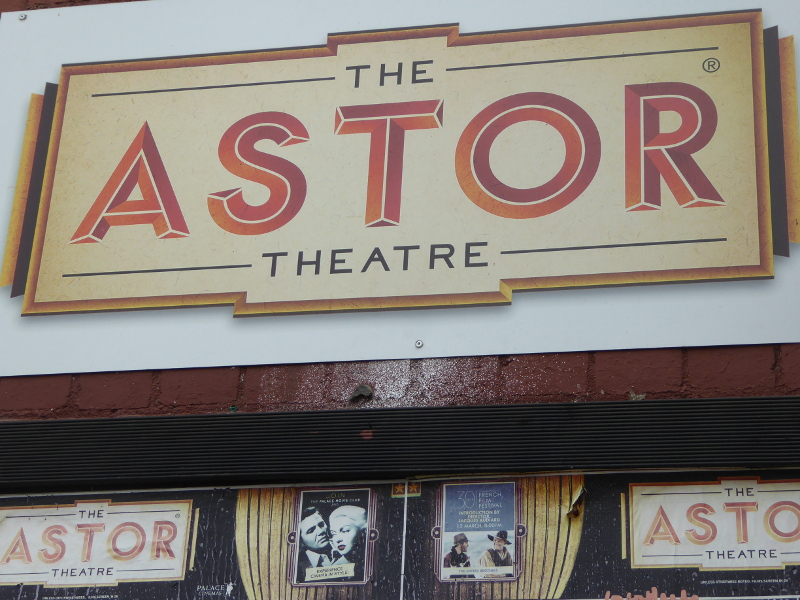 This is repeated on the inside, and I noticed that a film both of us are very keen to see, about two lighthousemen in America, is Coming Soon according to the latest posters on the interior walls. 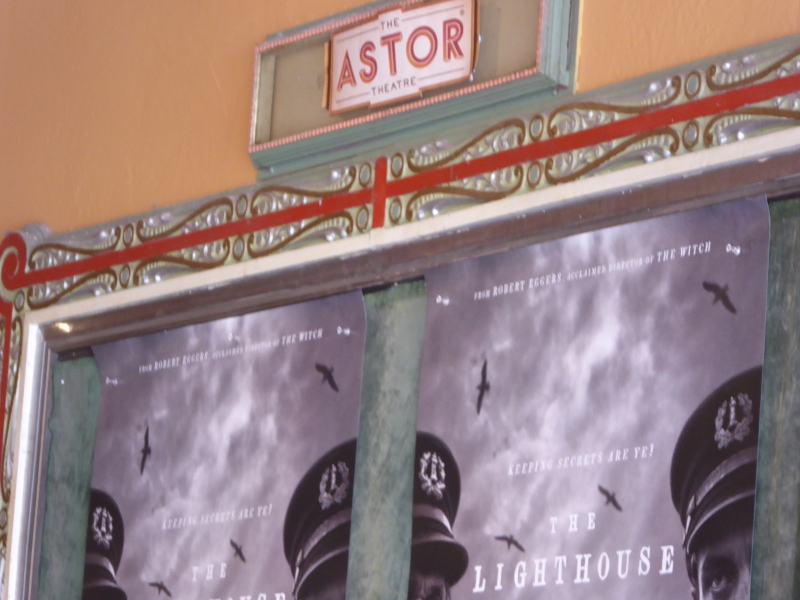 As with so many vintage cinemas, the foyer flooring is a marvel at the Astor, with that star motif picked up again. 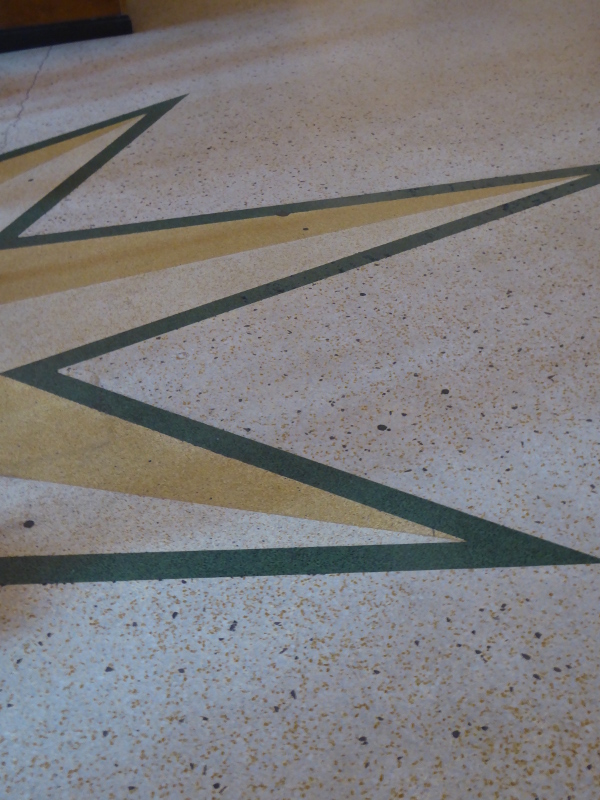 Overhead, you have the shapely oval balcony on the upper level. 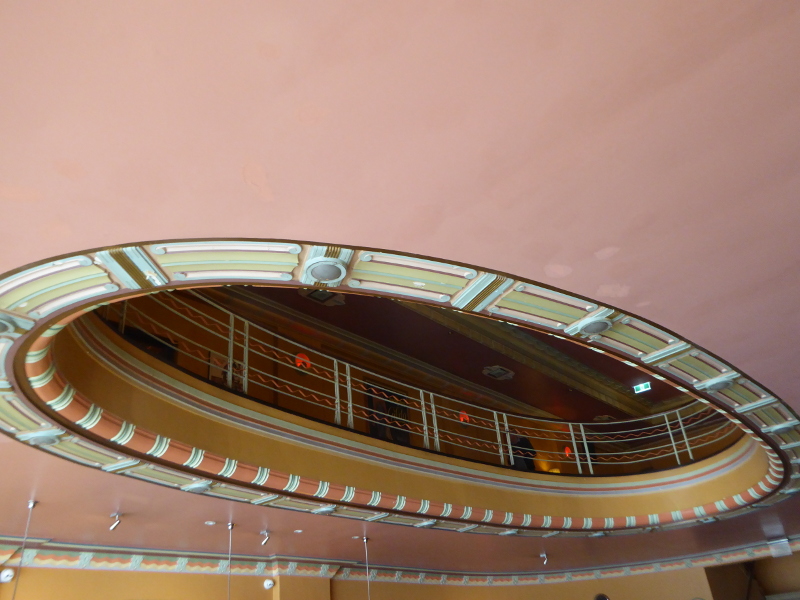 And all around, little original interior touches, from the flower in this wall decoration. 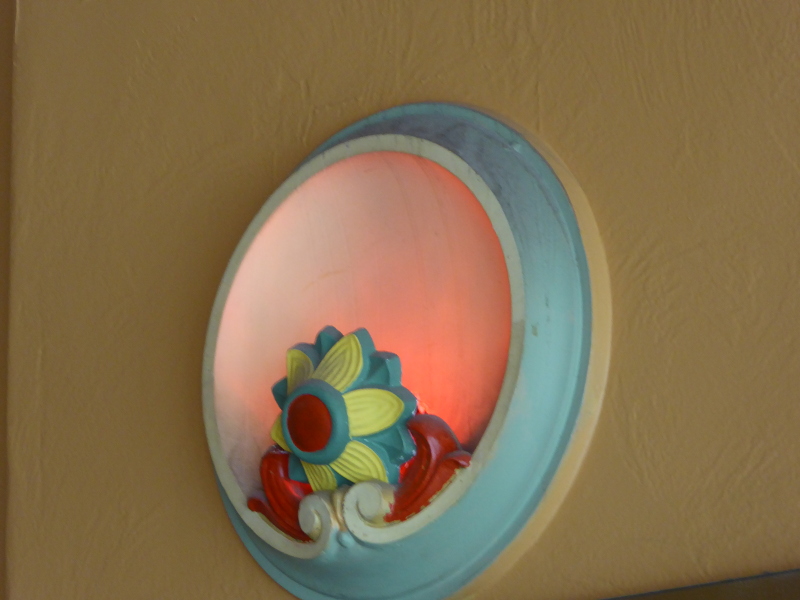 Or this old information board, no longer used for its original purpose, but left in place as another art deco touch. 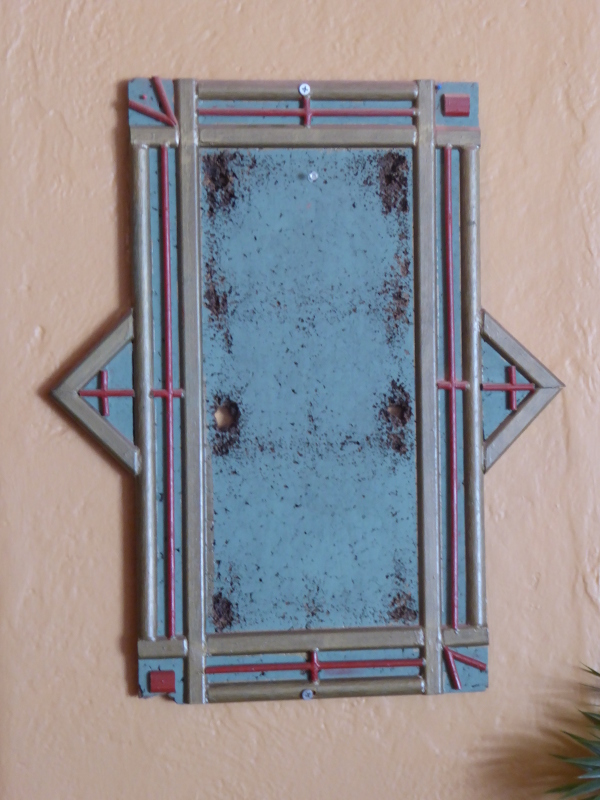 The staircase is not quite as grand as the one at the Rivoli, Camberwell, maybe, but the upstairs section is also a joy to walk around. There’s Atlas carrying his load on one pedestal (I never quite get why Atlas features so often in vintage cinemas?). 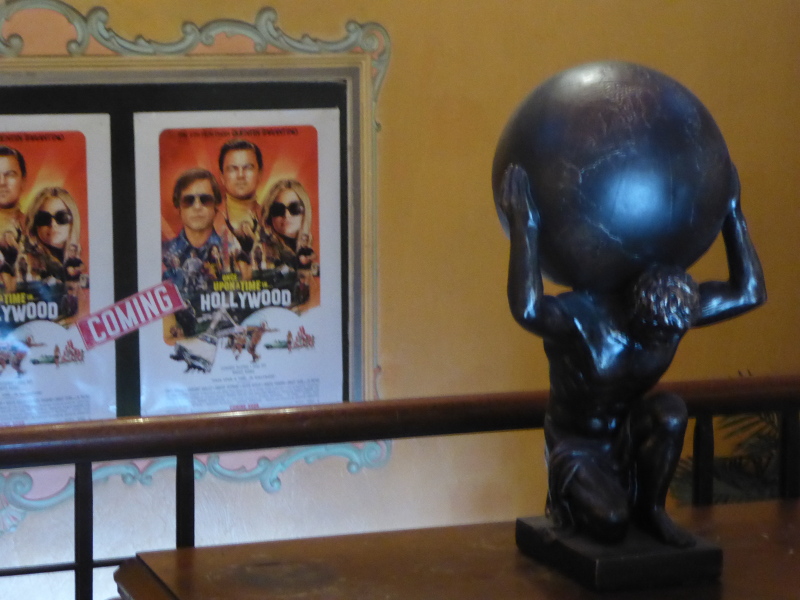 There are sofas and soft armchairs along the wall, under vintage film posters 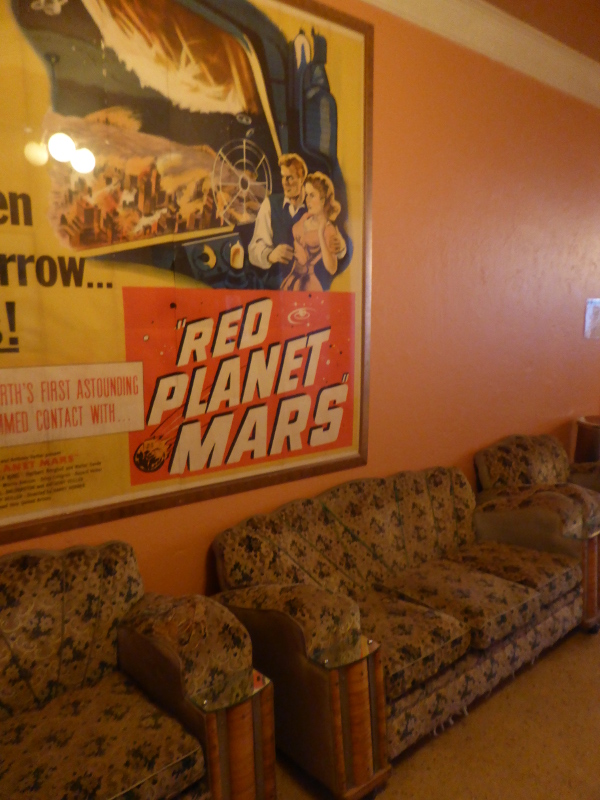 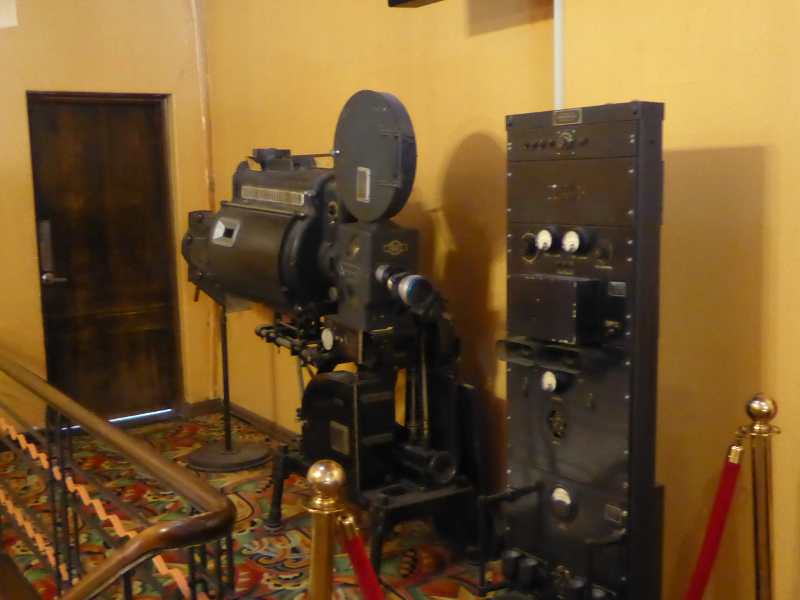 And of course, art deco mirrors, carefully placed to pick up the light and the colours to best effect. 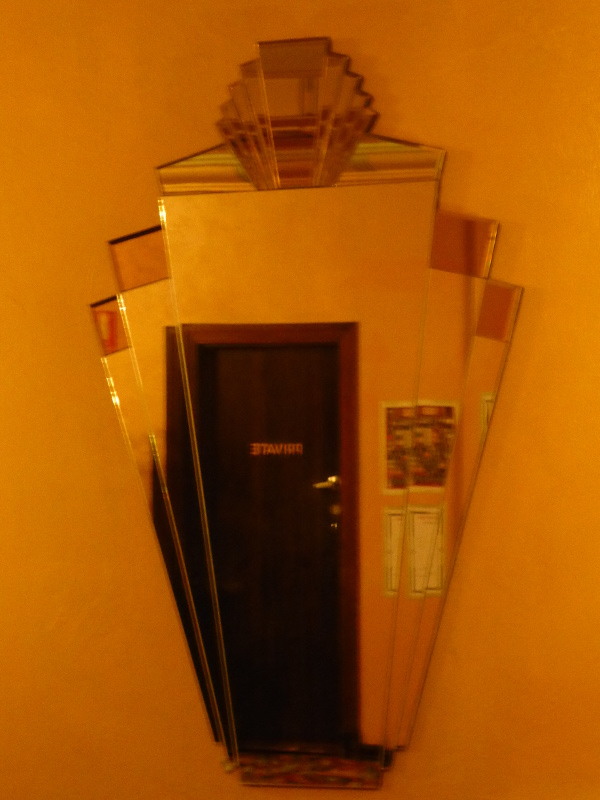 Inside the Dress Circle there was a buzz from the audience already building ahead of the curtain raiser.

The general soft lighting and curtains looked very similar to what I later read about on Trove when researching the Astor’s past, so it looks as if they have kept faithful to old features inside, too. 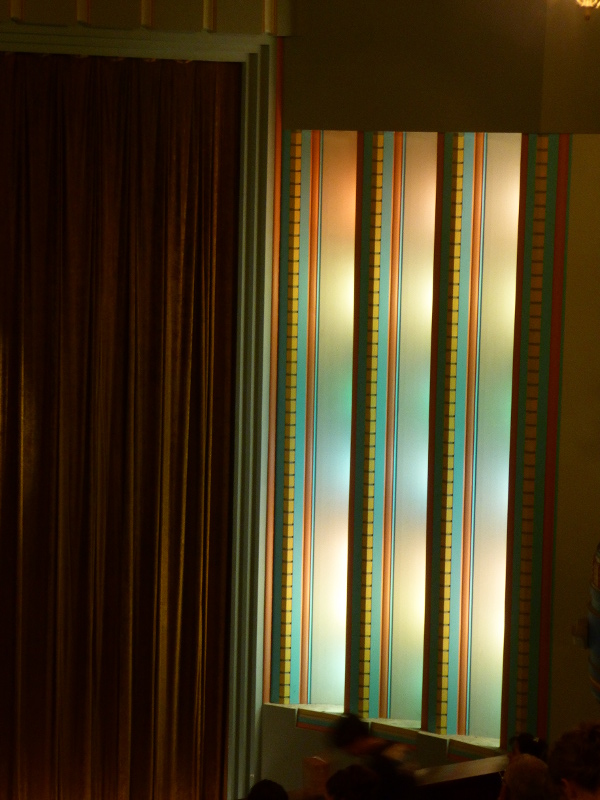 And finally, I was reminded of the Manchester Unity Arcade in some of the design features on the walls, though in the case of the Astor, again I’m not sure what the message is supposed to be in this one, for example? 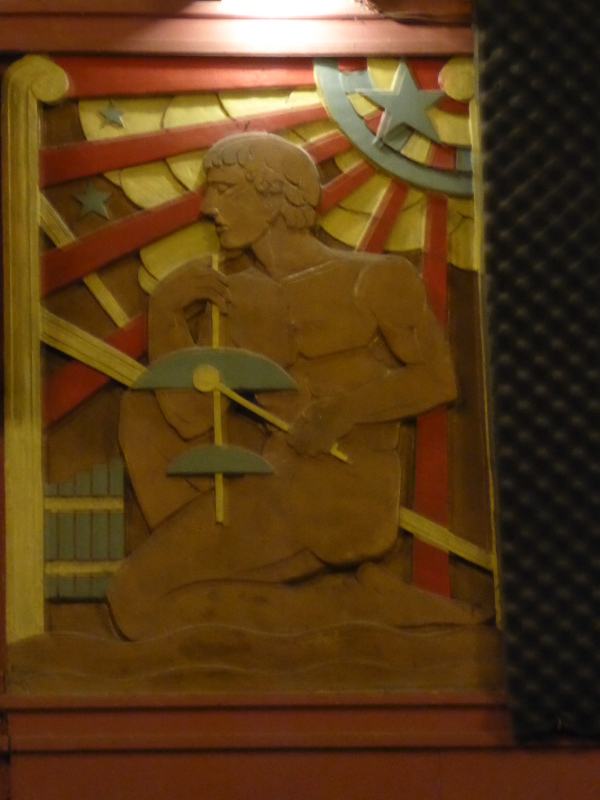 And then the film began. Well, actually they showed first some brilliant vintage animations with characters based on and 40s and 50s film stars, all very cleverly worked and adding to the atmosphere of the afternoon.

Casablanca was of course brilliant. Although there are sections where I could almost recite the dialogue as it screens, there are always new moments I haven’t seen before, or things that resonate differently as life experience takes us to a different perspective.

So, hats off to the Astor for keeping going, and thanks to all who have campaigned for that or bought into the venue (Palace Theatres seem to have been crucial more recently). I’ll be back as soon as I can, maybe for another classic movie screening.

Check out the toilets at the cinema – lovely fittings, tiling; even the sinks are vintage

History and stories about the Astor Theatre

The Astor Theatre was designed by the same architect as was used for the State Theatre (now Forum Theatre) in Melbourne, reviewed earlier by Vintage Victoria.

Even before the Astor Theatre in Chapel Street, St Kilda, first opened its doors to the public in April 1936, the newspapers were waxing lyrical about the place. In January 1936, The Herald mentioned that ‘neon indirect lighting’ would be used in the auditorium, ‘to create a rainbow effect’. I’m not sure what that really meant, but by opening night in April, The Herald was speaking instead of ‘soft, golden lighting’, ‘many attractive and novel features’, and ‘warm, beige tonings’. The usherettes’ uniform was in tangerine and green.

A young Harold Holt, who had just been elected to Parliament was the youngest MP at the time, was among the guest list for the Astor’s opening night. All this 30 years before he became PM and then disappeared off the coast at Portsea…The theatre opened with a Fred MacMurray and Carole Lombard movie, ‘Hands across the Table’.

The first year seemed to pass off fairly uneventfully with Trove news clippings only really showing the weekly programme of films being screened.

But virtually on the anniversary of the cinema opening, in April 1937, there was a break-in by a very organised gang who broke into the safe and ran off with the takings of the Easter weekend. They left behind their tools: gelignite, an iron bar and pistol cartridges. Lucky nobody was on the premises at 3.40am when the burglary took place.

The cinema held many fund-raisers over the years, during the second world war for a local battalion, and with various picture nights for local community groups and hospitals. For a while it sponsored the Astor Cup, for the ‘best and fairest’ St Kilda Aussie Rules footballer.

But I was most struck the story of Desmond Bradley, a young violinist from Essendon, whose early talent smacked of Mozart, with concerts at age 4, and performances with top orchestras by age 8. He left Melbourne to study in Paris, aged just 16, but he had the misfortune to have his wallet stolen not long after arriving, and ended up having to go to London to give concerts, just to have the funds to continue his studies, as his parents were ‘of modest means’. So various benefit concerts were organised around Melbourne, including one at the Astor Theatre, along with a premiere screening of a new film. The Astor event alone raised 1,000 pounds, which was a third of the overall target, and a fair bit of cash in the early 1950s!

In the 1960s the cinema was bought by a Greek movie chain and major refurbishments of the interior were made, reducing the seating capacity to 1200, but retaining the single screen and the stalls/dress circle lay-out, which hardly any cinemas had by that time.

In more recent years, there have been different owners and managers, but the overall concept and principle of the Astor has remained in place: to stay as a single-screen cinema showing classics and new releases.

I loved the listing from June 1995 of a screening, with new musical accompaniment, of a 1919 classic silent movie called ‘The Sentimental Bloke’, regarded by many in the Aussie film industry as the first great movie to come out of Australia. So the Astor already 25 years ago had a great tradition of screening classic movies and getting audiences in to see them. Casablanca in 2020, 78 years after being made, felt like a continuation of a great Astor idea!

And delving back through Trove press clippings, I noticed that another retrospective – in 1989 this time – saw a screening of two Marx Brothers classics. The listing even made it as far as the Canberra Times!

But the best sell-out show in relatively recent years has surely to be the screening of Strictly Ballroom, one of my favourite films of all time, which had people waiting for no-shows and going home disappointed during the 1993 Melbourne Film Festival. That’s a great turn-out in a massive single screen cinema like the Astor. But then if they can get 200+ for Casablanca in 2020…

Other links and writings on the Astor Theatre

This St Kilda website proudly owns the Astor as within its patch; so definitely not in Windsor, then, even if that is the nearer train station…

This Time Out piece from 2015 is about the then new manager Zak Hepburn.

This is the Cinema Treasures website entry on the Astor.

A Youtube video showing a clip from the SBS TV channel in 2010 on the Astor.

St Kilda Historical Society has more details on the history of the cinema and earlier buildings on the site.

The cinema came close to closing for good in 2015 but Palace Cinemas came on board and kept it running, thankfully – see this news piece on its relaunch at the time.

The Victorian Heritage Database has this entry on the Astor.

The Herald Sun newspaper announced the arrival of a new cinema cat in 2018.

What are your memories of the Astor Theatre?

What classic movie have you been to see at the Astor Theatre, and was it as well attended as Casablanca in 2020, or even Strictly Ballroom in 1993?

What’s your favourite thing about the Astor, which makes you keep coming back? Is it the films they show or more to do with the venue?

Has anyone got any stories to fill in my usual gaps from the 1950s onwards?