Gorgeous steam train running from Castlemaine to Maldon known as the Victorian Goldfields Railway. Through stunning eucalyptus bush so runs as a diesel in summer. Visible from our lounge room!

We can see the steam puffing up into the sky from our lounge room window and hear that satisfying chug that only steam trains make, the kind of sound kids used to mimic trains 50 years ago, and strangely enough still do today, even though the notion of choo-choo trains died with steam back in the 1960s. The drivers of this volunteer-run railway are also a bit trigger-happy on the train’s whistle, which has a happy tooting sound filling the air between Castlemaine and Maldon every day this service runs. 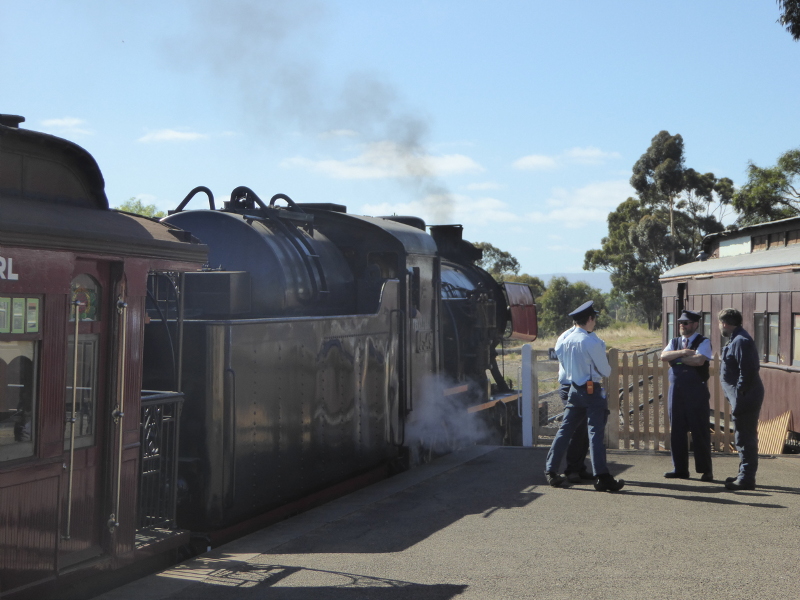 So we decided to take a ride over the Easter weekend and what a pleasure it was. Although we live in Castlemaine, we didn’t really want the two hours or so a Castlemaine-Maldon-Castlemaine run would have allowed us in Maldon, so we opted to ride the other way round, allowing us just 45 minutes for a quick coffee in Castlemaine and a chance to catch up with James, who runs the rather good coffee kiosk inside Castlemaine station (details below). 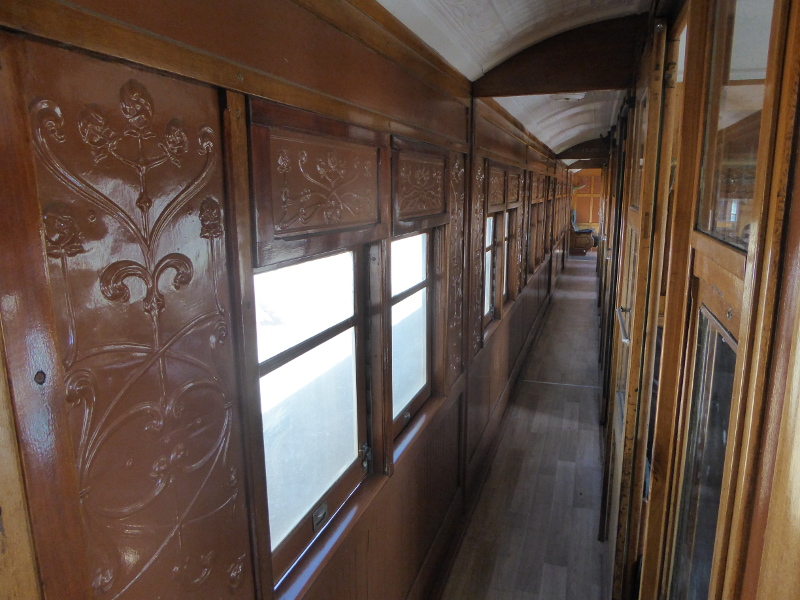 Inside the carriages, just enjoy the décor, whether you manage to get a small compartment to yourself or sit in the more open carriages. The wood panelling is somehow relaxing, with beautiful designs around some of the doors and along some walls. See how long it takes to work out how to open the windows, and then let the cool eucalyptus-filled air stream in – unless of course you sit on the side the steam trail might enter, in which case you risk a Brief Encounter-style encounter with smut, though look where that got people back in the 1930s…

The train trundles through beautiful bush, alternating with fields of livestock. We saw more cows than roos, though I guess some days passengers may well spot a kangaroo or deer from the train, so keep those eyes peeled. 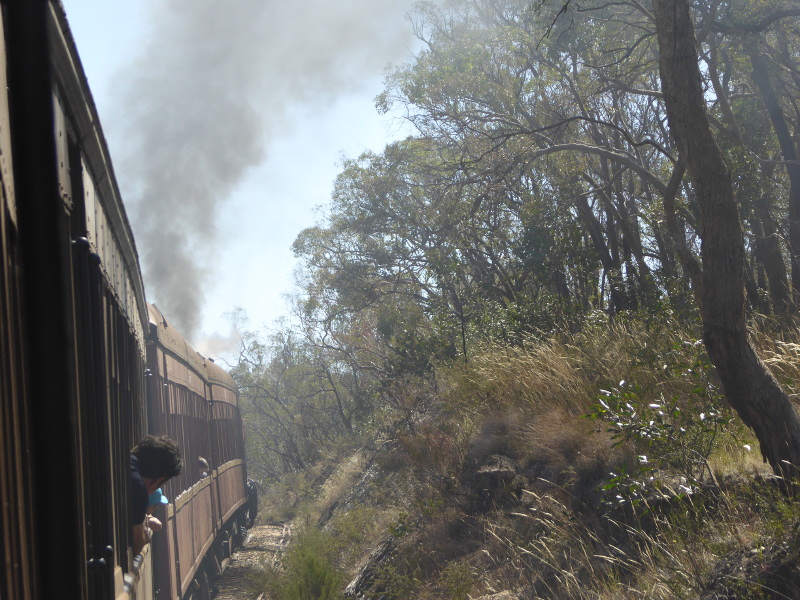 Muckleford is more of a halt than a stop, and there really isn’t much to get out for unless you are planning on doing part of the journey on foot or by bike. It made me wonder also when Muckleford was ever used in any regular way by locals, but I guess there must have been a reason to build the station, and it makes for a nice pause on the run between Castlemaine and Maldon.

I love the way people wave at steam trains. Those who live with their back yard right onto the track must have seen trains glide past for as long as they have been living there, but still they get out on their porch or lean on their fence and give the passing passengers a wave. And of course, we returned the favour countless times between Castlemaine and Maldon; it would have been rude not to.

We’ll do a separate post for the Maldon end of the line next up on Vintage Victoria.

It costs about $50 for a return trip on this railway, so it’s not cheap, and you can pay more in First Class.

Trains run every Wednesday and Sunday, plus more days during school holidays so check the railway website for details on times and days of departure.

The steam engines are replaced by diesel in the summer months, presumably due to fire risk from sparks or embers, though it was very dry even up to mid-April when we took the train, so if fire risk is the reason, they might want to rethink that strict calendar-based restriction!

The bike trail runs more or less alongside the track. We have cycled from Castlemaine to Muckleford and back, and were surprised actually at how undulating it was, so not a totally flat or inclined experience. But one day we will surely cycle one way and ride the train back.

The train stops in Muckleford so you could also get off there and join the trail for another section if that was your choice.

In Maldon, the station is a little way outside of the main shopping street so allow time to walk if you park in town itself. In Castlemaine, parking can be tight in front of the station, though there is an under-used new car park a little further along Kennedy Street, and ample parking behind the station.

History and stories from the Castlemaine – Maldon line

The Castemaine-Maldon line was built in the 1880s so the Trove website was again a great source of snippets at the time. I loved also how a news in brief reporting on progress building the track was to be found next to a small item reporting on Mr Stanley (of ‘Dr Livingstone, I presume’ fame) ‘recruiting his health in Nice in the south of France, before returning to the Congo’. It put the railway’s construction in the context of the times.

When the line opened in June 1884, the Mount Alexander Mail reported that the first train left Castlemaine at 10.30am with lots of dignitaries on board and arrived in Maldon at 11am (so, faster than today’s Goldfields Railway journey), including a halt at Muckleford. Bands played in celebration, school kids sang in the streets, there was a dance in the local hall, and much mirth, rather like Maldon on the Easter Monday we took the train, as crowds lined the streets for the 141st Easter Parade in 2018.

The article also reported on the many people along the line who waved ‘flags and handkerchiefs at the first passenger train to pass their doors’. So not much has changed now, then, except there were no flags or hankies that we could see.

At the height of the line’s usage, there were three return trips a day on this track, with talk in the early days of ‘excursionists’ (no tourists in those days) between Maldon and Melbourne.

By the 1930s, there was already talk of closing the line, but a 1940 public campaign kept it open. The discussion at the time was interesting, though, with some arguing that with roads running alongside the railway, ‘both could not survive’…And the road service – meaning public bus – was more popular among Maldon residents than the train, so by 1941 the decision was made to close the line..

Goods trains continued occasionally but bushfires in 1969 closed part of the line beyond Maldon and that saw the end of rail traffic between Castlemaine and Maldon in the 1970s.

Enthusiasts almost immediately began to campaign for it to reopen as a heritage railway, and the Victorian Goldfields Railway was officially opened at Easter 1986. By some extraordinary coincidence, I was staying with friends in the region at precisely that time, and can remember seeing the steam train one day, though I had no idea it had only just started operating again! But it didn’t extend to Castlemaine till 2004/5, so my viewing must have been near Maldon, indeed very near Maldon as the initial opening only covered about 1km of track.

No individual has stood out from my brief research into Trove or the Goldfields Railway website itself, but it would be great to hear from anybody who can still remember being at the initial meeting of the Castlemaine and Maldon Railway Preservation Society in 1976. 42 years on, we have a lot to thank those guys for and surely one of the older folk volunteering still today were around back at the start??

What are your memories of the Castlemaine-Maldon line?

Did you ever travel on the line when regular passenger services were still operating? Or any of your relatives who speak of the days when there was heated discussion over whether buses or trains were preferable to ply this route?

Have you been on the Goldfields Railway and got a good story to tell?

Anybody you know at that crucial 1976 meeting looking to reopen the line?

Other links and writings on the Victorian Goldfields Railway

I liked this piece by Melbourne writer Louise Reynolds who spent a weekend on the railway in 2016 and spoke to one of (relatively few) women volunteers on the railway.

The Vacation Dad blog went to Castlemaine and Maldon for the railway in 2017 – I think he needed our coffee tips, though, judging by what he wrote.

At the Castlemaine end, just go to the kiosk in the railway station ticket office where James will serve up a good quality coffee using the beans from local roaster Coffee Basics. If you’re lucky he might also have some muffins to nibble on before you get the train back to Maldon.