The peaceful Westernport village of Tooradin has had several jetties since the first was built in the 1890s. The current jetty and its fish shed were overhauled in 2021, now with good disabled access.

Tooradin is a peaceful little place, even on a weekend at the height of the Australian summer holidays (though it’s also hard to know how much the latest Covid outbreak has stopped Victorians getting out and about on a summer’s day). 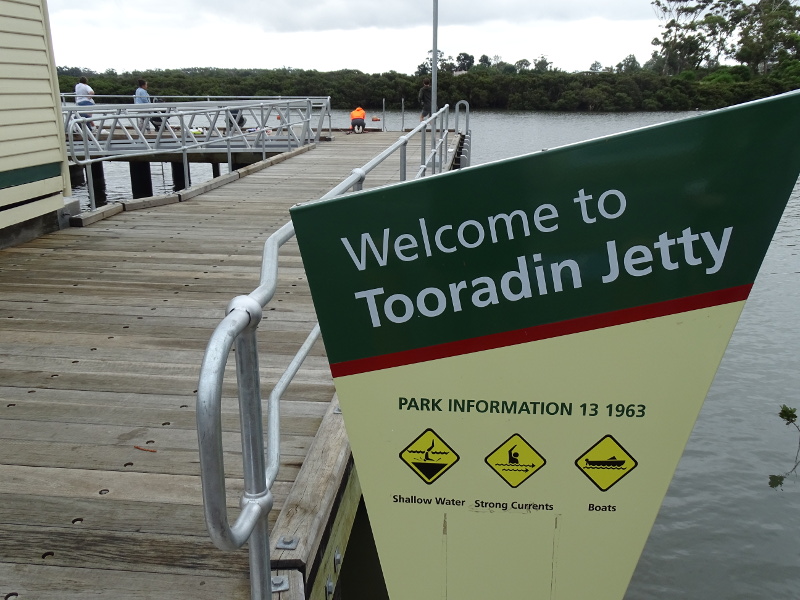 I wasn’t completely convinced that Tooradin Jetty warranted an entry on Vintage Victoria, either. The original (I think) jetty at Tooradin is long gone, just a line of short stumps remaining from this structure that seemed to run along the shore of this Westernport village rather than reaching out into the water, as most piers do. 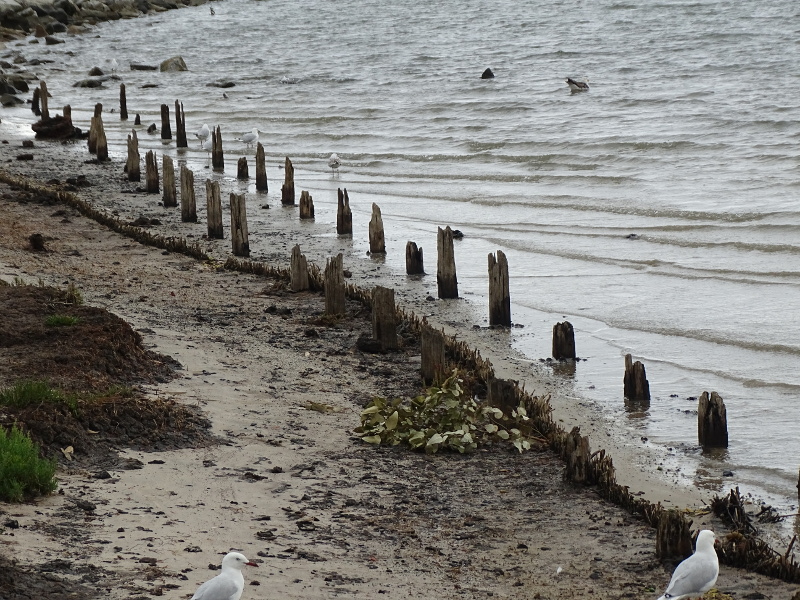 A couple of hundred yards back up the water is another jetty, though it too barely points its way far out over the water. The boardwalk here stretches maybe 50m out before taking a 90 degree turn to the left. 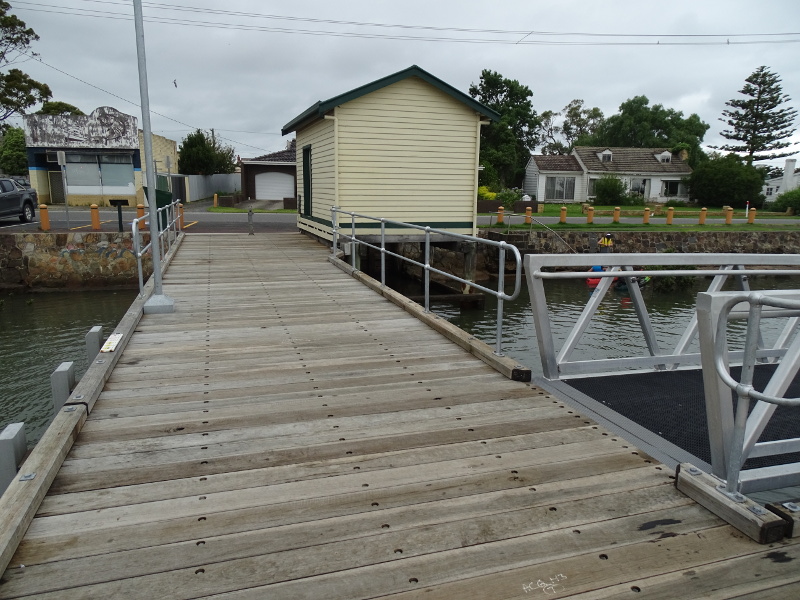 Tooradin Jetty makes it onto the piers of Victoria page, though, especially with its fishermen’s shed adding to the charm of the place. 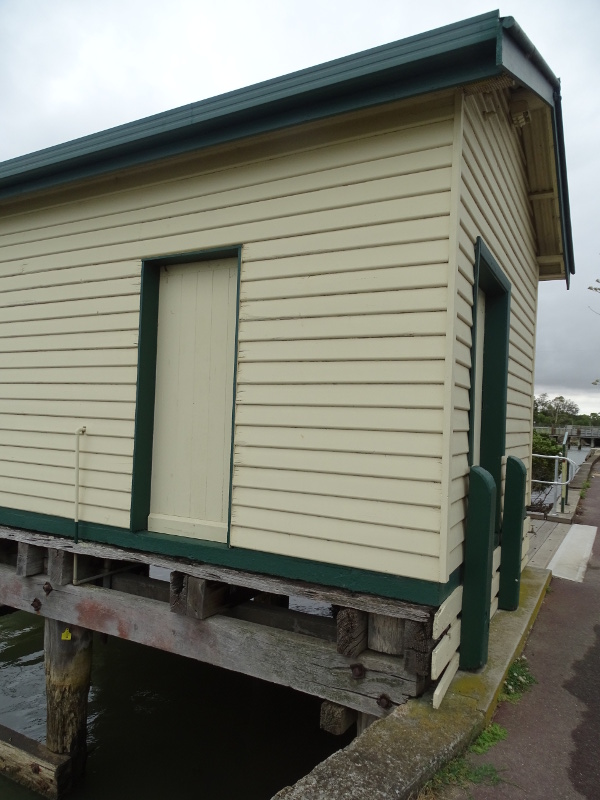 I was also pleased to find at least a couple of stories about Tooradin Jetty on the Trove website, unlike the nearby Warneet Jetties, which produced nothing of substance on my Trove search. 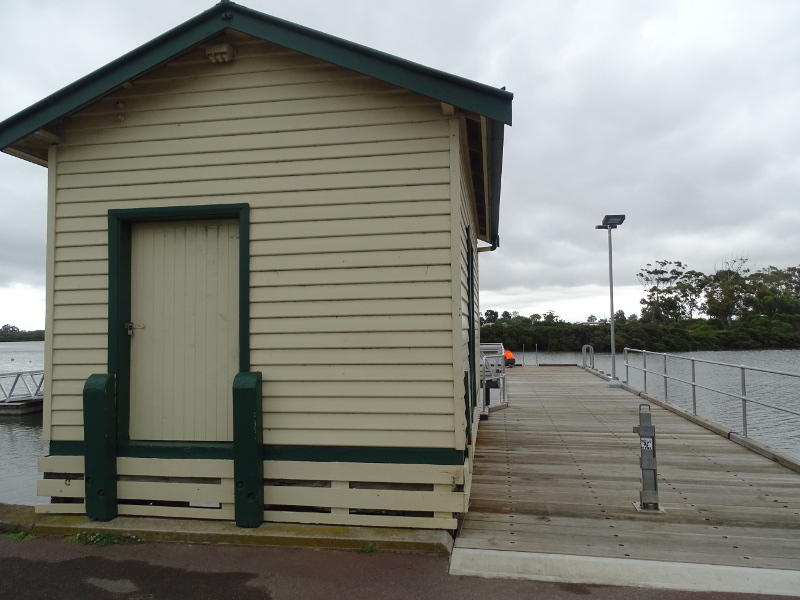 I am a bit confused still, though, on which of the Tooradin jetties came first – this information board by the existing jetty suggests that this structure has been in place since about 1890, but that would mean the stumps of piles down the water must be from the later-built structure, since my Trove search suggested that a second jetty was built around 1918. 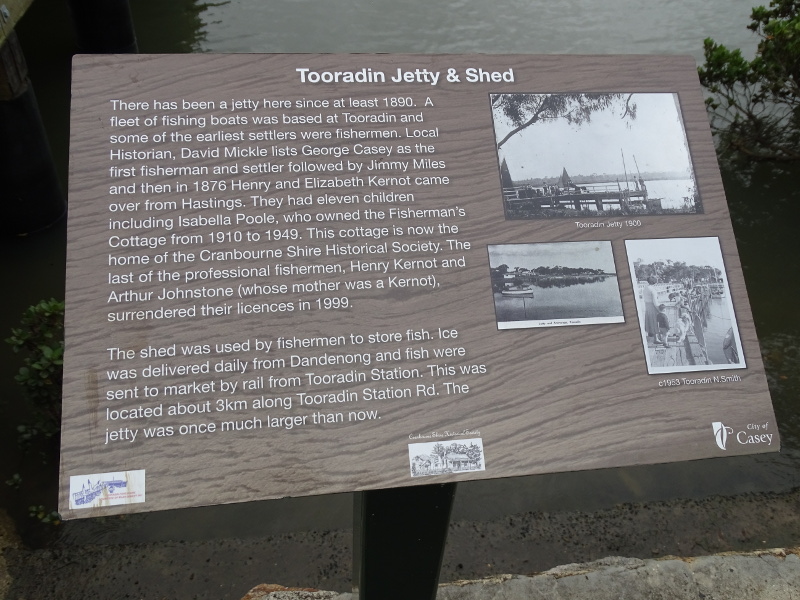 That 1918 work was also said to have been on the ‘low tide jetty,’ but without local knowledge, I have no way of knowing which of the two, the stumpy old one or the existing one, might once have been considered a ‘low tide’ jetty. If anyone can help shed some light, do let me know.

Talking of sheds, the information board helpfully tells us that it was used once to store fish and ice, though it’s a shame again that there is no mention of a date it was built (anyone?). At least we do find out from that board that the jetty was once a lot larger. 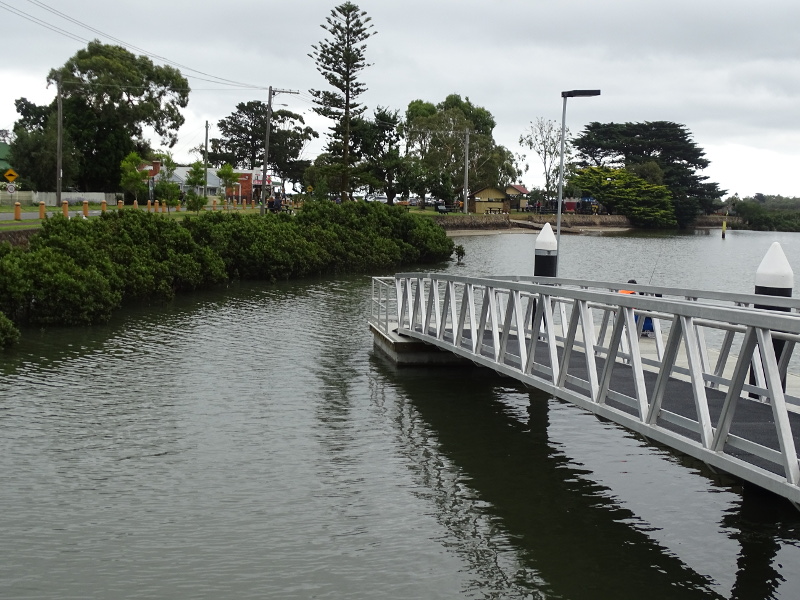 Tooradin Jetty didn’t really feel like the kind of pier people promenade along to take the air.
It still serves a purpose and was well-used on the day we visited by fishermen, young and old, trailing their rods and lines over the edge.

As I mention in the History section below, I am also intrigued by the reference to the ‘low tide jetty’ being built near a lighthouse.

There is no sign of a real lighthouse, but was there once a beacon here? Or is it just a coincidence that the kiddies’ playground between the two jetties has a lighthouse theme (and a red lighthouse slide as the centrepiece)? And then there is a carved lighthouse structure forming one of the attractive wooden sculptures along the shore back near the former jetty. 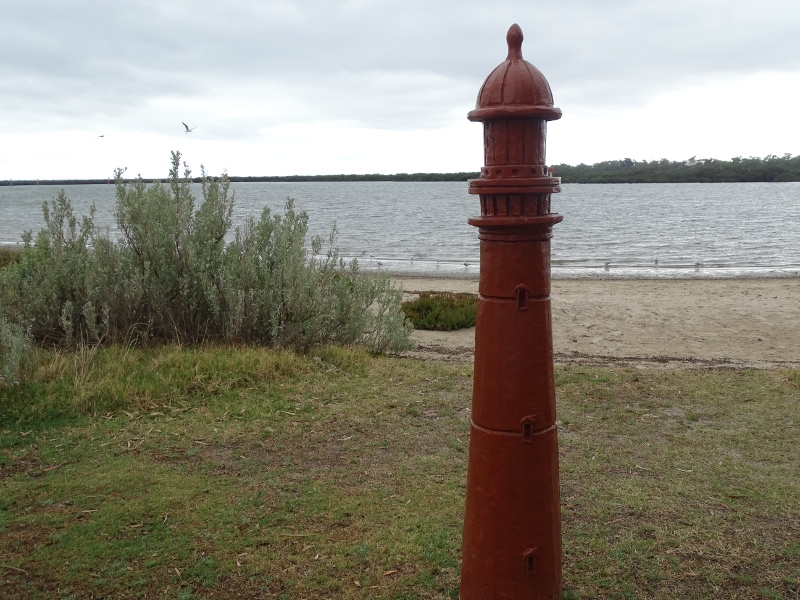 After a few days of relentless heat, we enjoyed the cool breeze blowing in off the water, making it almost too cold to eat our sandwiches on the benches on the foreshore (much to the disappointment of the eager seagulls). We just stayed a while to watch the graceful pelicans winging their way over the water – how do they manage to swoop so close to the surface without once getting their wings wet? 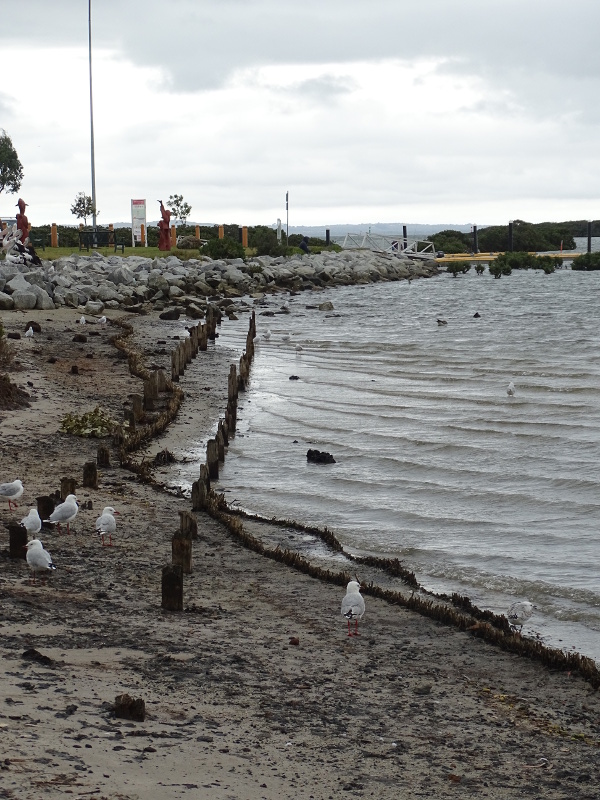 The old Fishermen’s Cottage – now home of the local historical society – is a lovely vintage presence, and in front of that another of those George Bills horse troughs – I think that makes three that have appeared on Vintage Victoria so far (just a few thousand more of those to find…).. 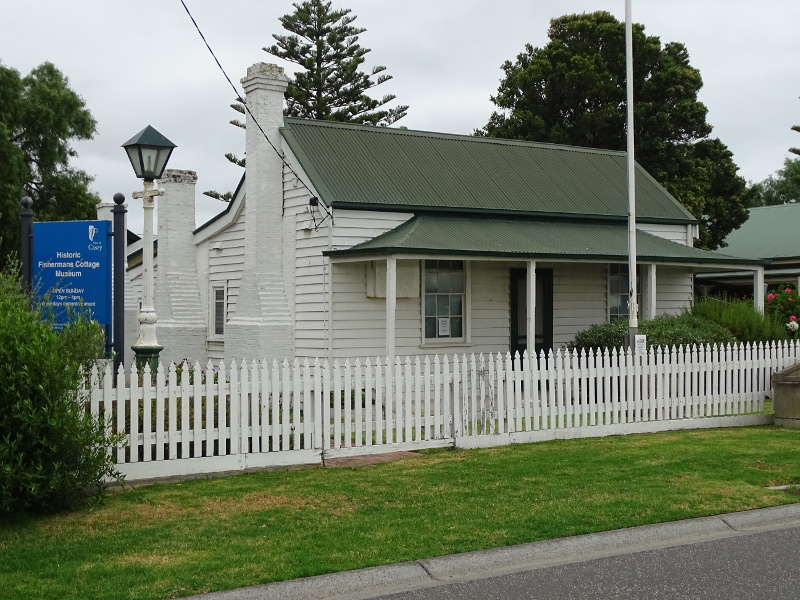 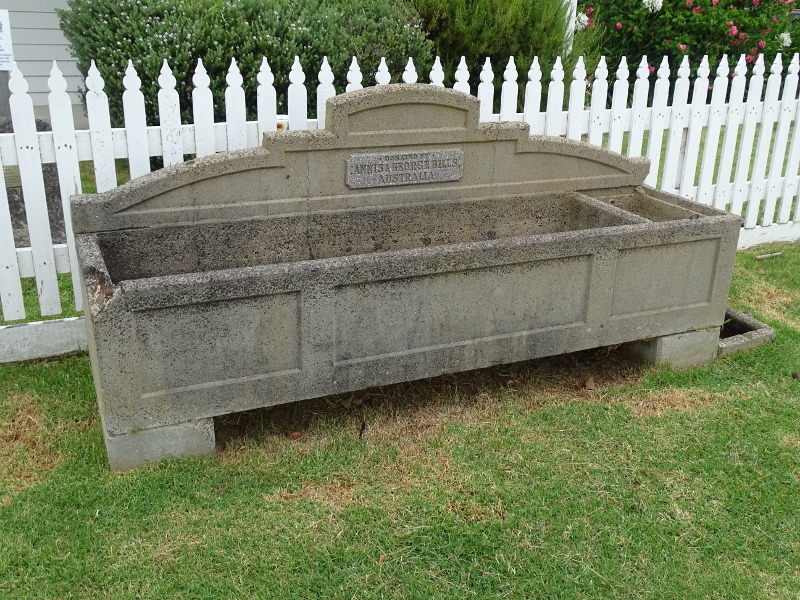 No benches on this jetty, and no shelter, but it’s not very far to run back for shelter if needs be

Toilets in the reserve near the jetty.

History and stories about Tooradin Jetty

February 1899 saw the first mention of the jetty on Trove. A church choir held its summer camp near the jetty in Tooradin. 20 boys received instructions in practical skills like treating a snake bite, rescuing from drowning, looking after a firearm (!). they held a carol concert one evening (yes, in February), and enjoyed a slap-up supper made by the Ladies of Tooradin in the evening. All sounds idyllic…

Tooradin was always a sleepy fishing village, it seems. When the new school teacher arrived by boat from Cowes, with all his furniture on board in 1917, it was said to be the biggest boat to moor at the jetty in 20 years, drawing quite a crowd of locals to witness the event, and welcome the new arrival.

Construction of a new low tide jetty was funded in September 1918, the new structure to be placed ‘near the lighthouse’. I found no reference to a lighthouse at Tooradin, but I wonder if any local reading this might be able to shed some light (no pun intended) on this, since there is not only the lighthouse playground near the water at Tooradin, but also a carving of a lighthouse on the foreshore not far from what remains of the old jetty.

Things weren’t always calm and peaceful by the Tooradin jetty. In September 1943, a local fisherman had lain his nets over the jetty railings, only to return and find somebody had poured acid over them. The CID detectives were involved, helping the local constable, but it’s not clear from reports whether the culprit was ever found.

But there were also tales of heroism at Tooradin jetty. In 1947 an 8-year old boy called Maxwell Coventry received a gallantry award at a ceremony in Melbourne after rescuing a drowning 9-year old girl Lenice Burns from the waters near the jetty. He jumped into the water and brought her up to the surface even though he couldn’t swim, and she almost dragged him under in the deep water near the jetty. They’d both be in their 80s if still around today. Anyone know them and do they ever tell the tale?

Other links and writings on Tooradin Jetty

I rather liked the sketches of this artist blogger down at Tooradin, including one of those stumps from the old jetty here.

This local newspaper article from March 2021 talks of the upgrade to Tooradin Jetty completed around that time..

And this is a nice Department of Transport YouTube video where locals talk of the change to the jetty in 2021, with improved disabled access, and a quick view of those herons in flight…

What are your stories and memories of Tooradin Jetty?

Does anybody have any stories from the past to bring Tooradin Jetty up to the present day from the date of my last story off Trove in 1947?

Can anyone help sort out the dates of construction, and confirm which jetty was the ‘low tide’ one? Also was there once a lighthouse or beacon at Tooradin?

Or just get in touch with a comment on your own experiences down at Tooradin Jetty, or in the waters around it, especially if you ever caught a boat or ferry off the now defunct jetty.

And can anyone help tracking down those kids involved in the 1947 rescue: Lenice Burns or Maxwell Coventry?