Seaford Pier is one of Victoria’s later vintage piers, the first plank being laid in 1929. It’s had its fair share of dramas in its near 100 years life, though.

I liked Seaford Pier. A proper, solid, finger reaching out some 175m into the bay – no frills here, but also none of the original workings I had read about in the history of Seaford Pier, like pipes for freshening the creek water or fishing nets laid out over the deck. 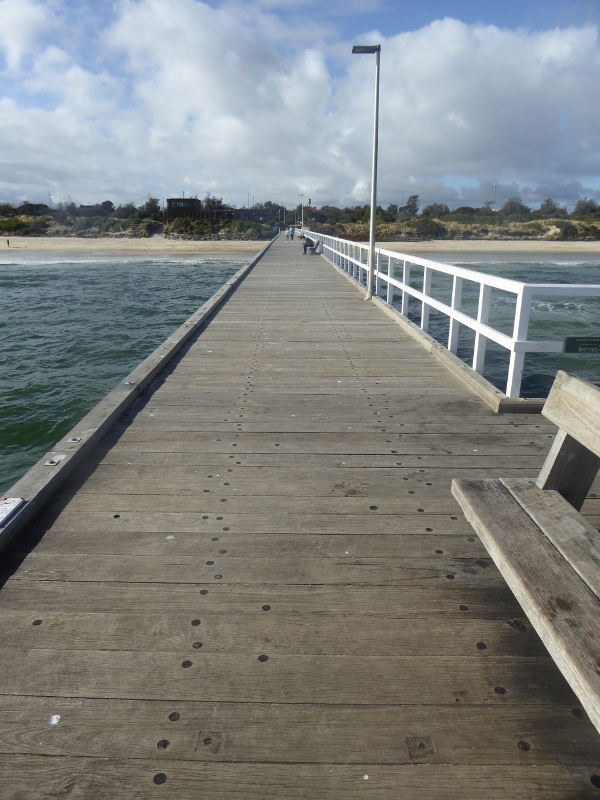 No, this was a simple, straight, boardwalked structure, which reached far enough out for me to need to hold onto my hat in the stiff breeze off the water. 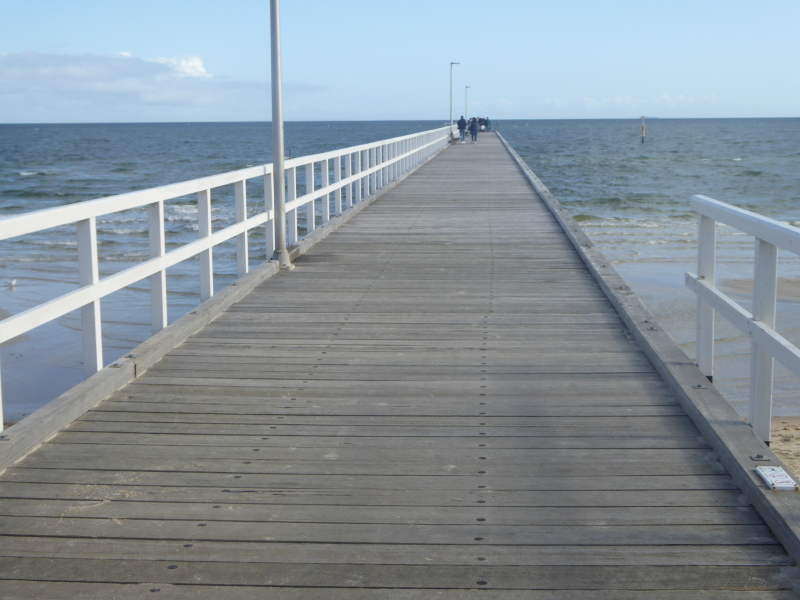 The south side of the pier has a white fence, while the northerly edge is bordered only by those ankle-high boards that seem so risky for a risk-averse country like Australia. 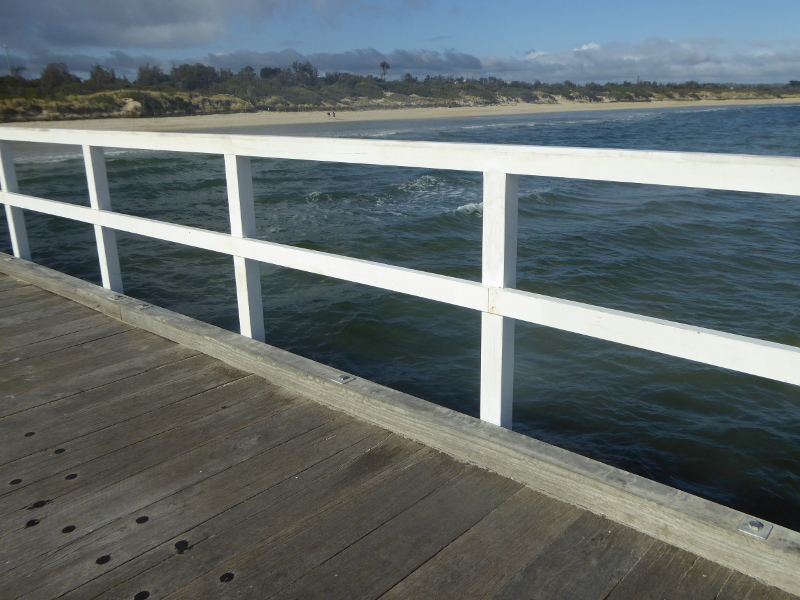 There are a couple of benches, facing north only, along the outstretched length of the pier. In bright sunshine, that north-face made it hard to sit comfortably, especially with sea gulls swooping in as soon as I opened my sandwich. 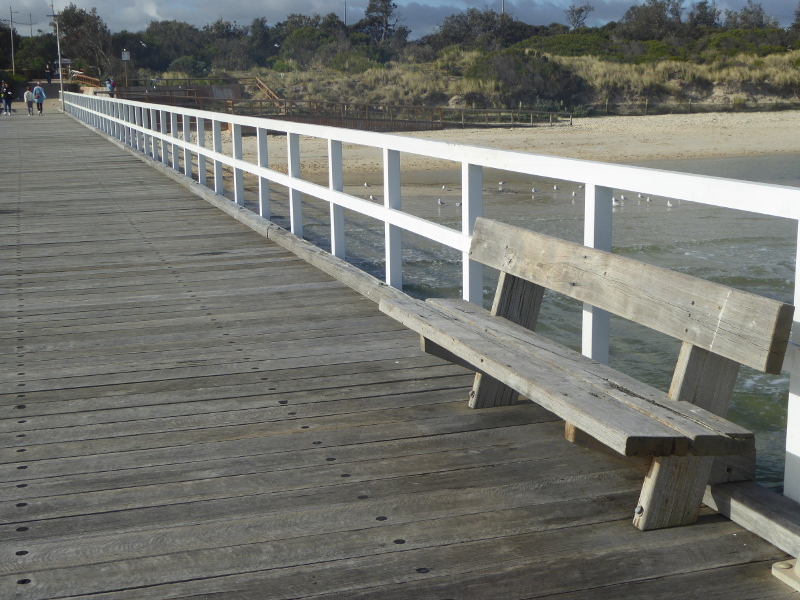 And then down at the far end are two benches, back-to-back this time, but another family had grabbed the south-facing one. 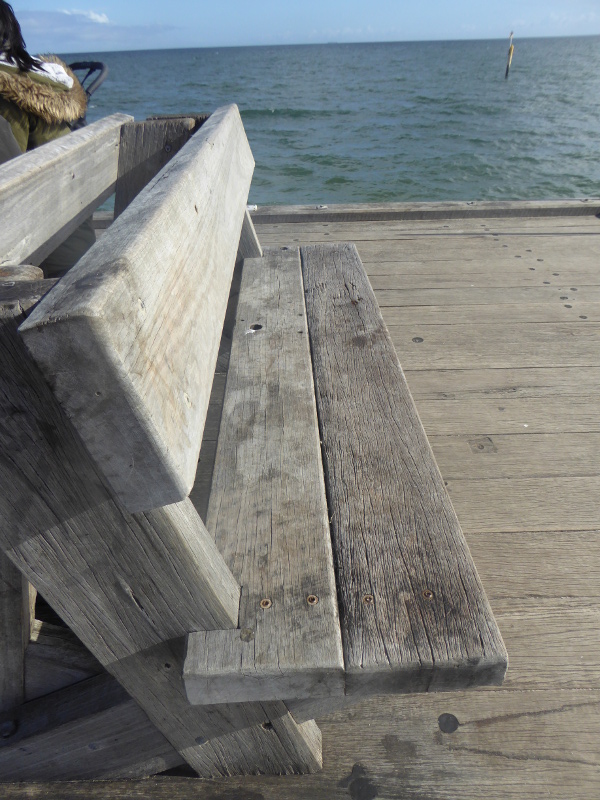 There’s no sign of mooring irons these days; just a couple of rusting metal steps down to the water on either side of the end section of the pier. 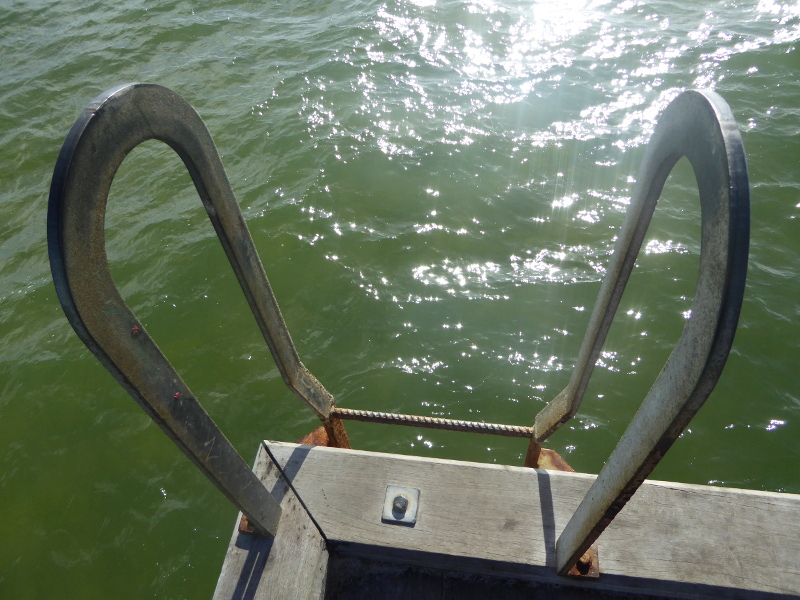 I think the whole pier must be a fairly recent re-build as the lamps also looked pretty modern, along with the very firm and solid boards. 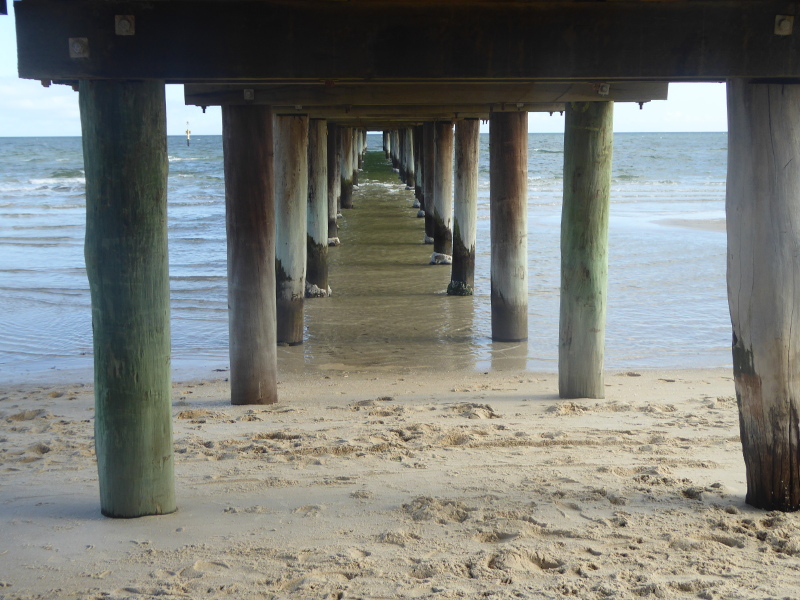 Back at shore, I ventured underneath, which always gives such an exciting perspective on a pier. The piles actually looked fairly old, so the new structure may have been built on the original foundations. Or, the tides have just weathered these piles already. 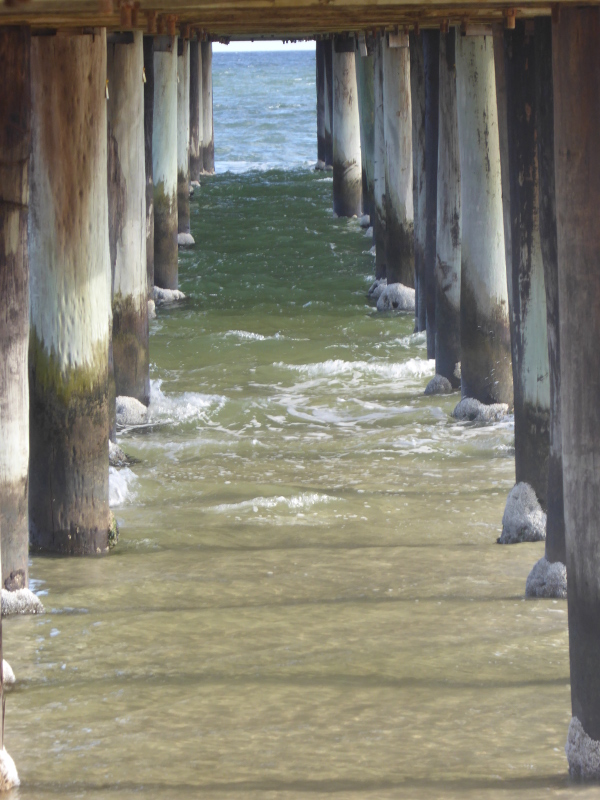 The waves were lapping in down towards the end of the pier on this day when I was there at mid-tide. The water looked deep enough from the end of the pier, though it’s always hard to tell from above, as shown by those diving and drowning accidents from earlier decades (see below). 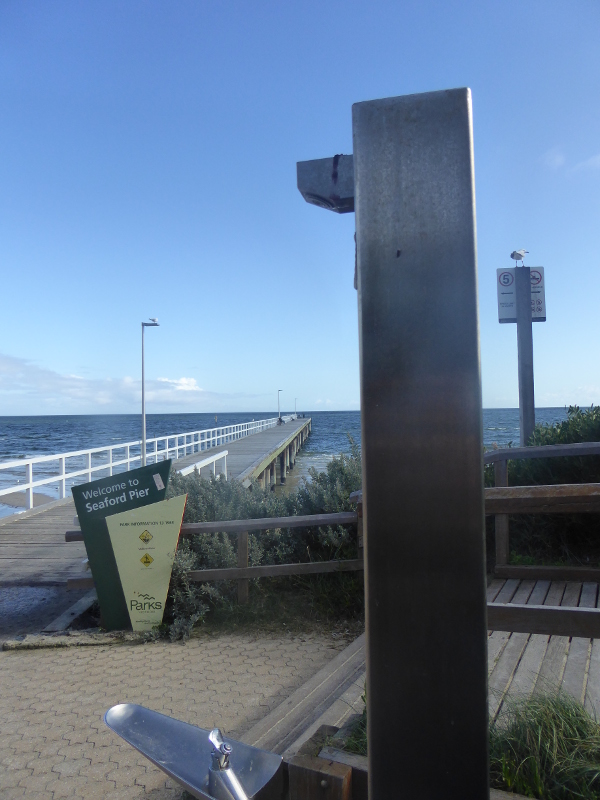 There was nobody in the water on this mid-winter’s day, in spite of the sunshine. The nice sandy beach does, clearly attract bathers, though, as there is a shower handily placed just yards from the start of the pier, under the eyes of the Life Saving Club. 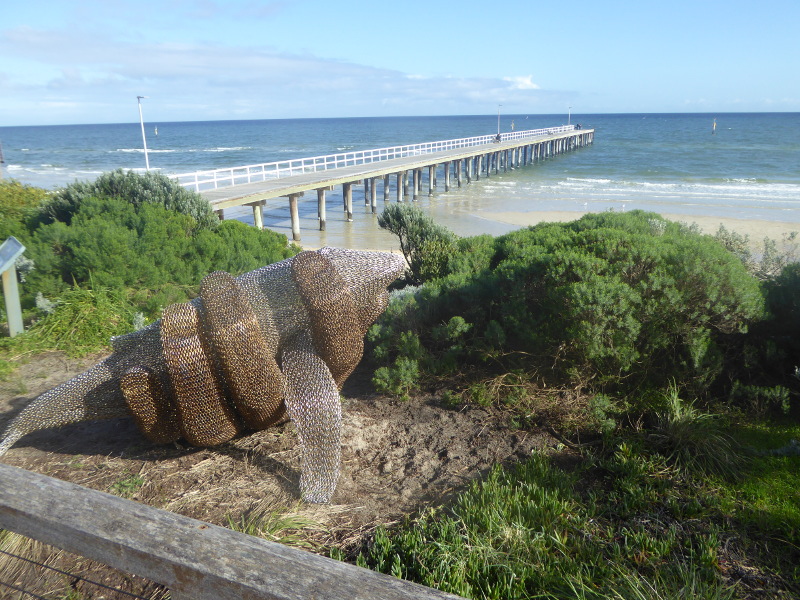 I quite liked the Sculpture by the Sea up here next to the club building, too. It’s by a Mike Van Dam from Queensland, and it represents the nurturing back to life of hump back whales along the coast since their near extinction in the 1970s. No sign of any such life near the pier for my visit, but I liked the concept and the intent of the sculpture. 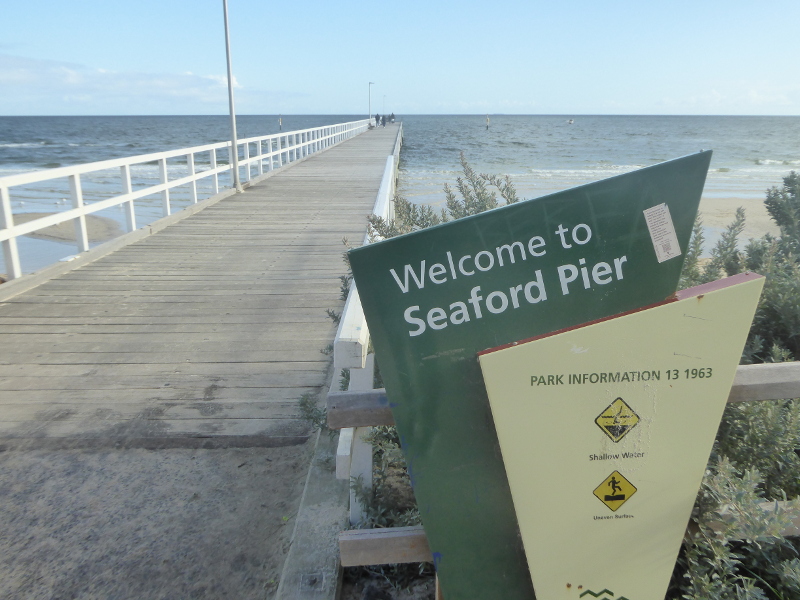 Seaford Pier was not busy by any means. But there was a steady trickle of human legs taking a stroll along it while I made my own way back towards the village itself. 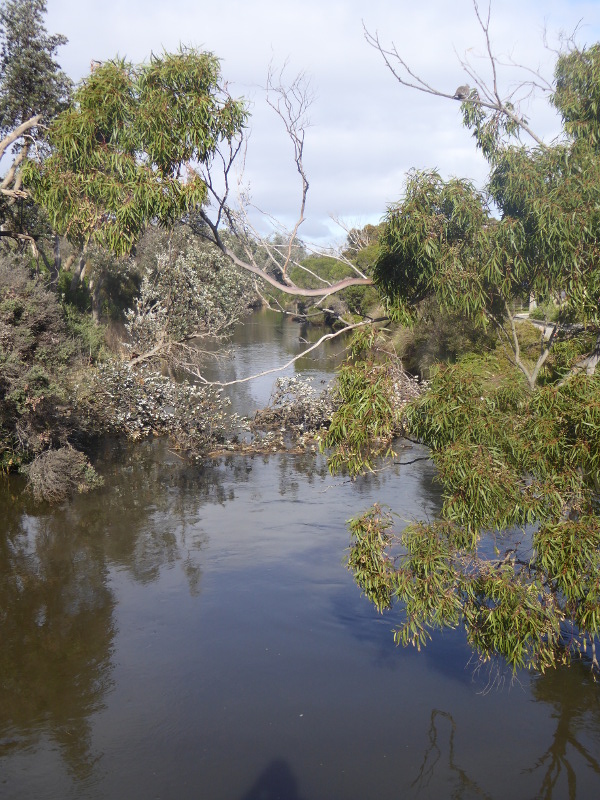 Here, I wanted to check out the Kananook Creek, which runs parallel to the sea, but obviously served settlers with its freshwater (hence the drainage pipes which used to run along the pier here). 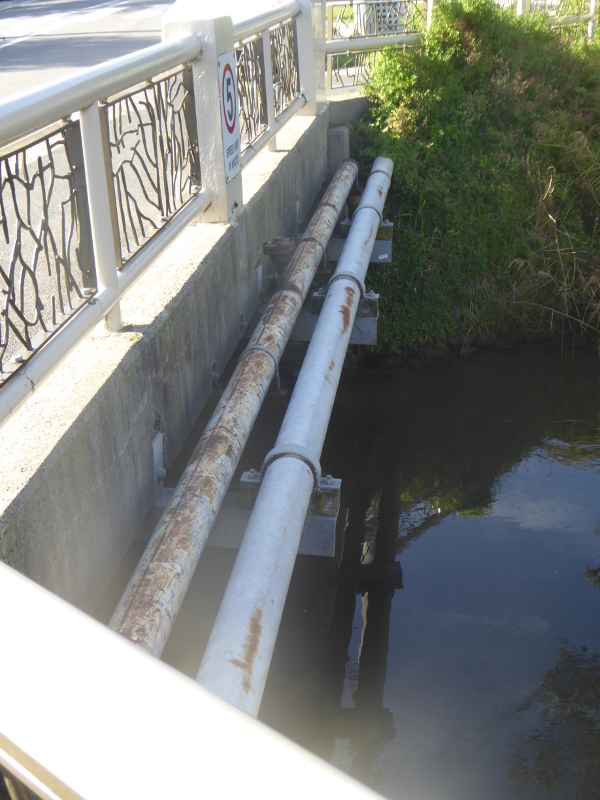 There were signs of small pipelines still running along the bridge over the creek. But I was also pleased to see the signage – and the bridge design – aimed at connecting back to the original owners of this land, who would fish for eels along the Kananook Creek.

Benches along the pier and at the end

History and stories about Seaford Pier

The Premier laid the first plank of Seaford Pier on 25 October 1929. There was a bit of a political crisis in Victoria at the time, with the then Premier about to lose office (having lost the support of a certain Robert Menzies). He was quoted as saying, as he hammered in the first 8-inch nail, “I wish this was a nail in the political coffin of my opponents,” (though it was not clear if that was aimed at Menzies or at Labor, who went on to win that summer’s election).

A teacher at the local school paid for the purchase of a lifebuoy to be installed on Seaford Pier in 1934 after witnessing a girl from her school get into difficulties near the pier one day. The girl was rescued, though her rescuer got himself badly cut up by knocking himself against the piles of the pier as she struggled in the water.

The September 1934 storm which wrecked many structures along this line of the coast, also nearly caused a tragedy at Seaford Pier. A local councillor and his two sons were desperately trying to tie extra mooring ropes to a yacht as waves crashed around them and almost threw them off the pier into the Bay. The yacht subsequently took off into the Bay with a crew of two on board, but got into difficulties and the heroic councillor put to sea in his own rowing boat to help tug the yacht back to the pier and relative safety. The owners decided to take the train back to Mordialloc that evening.

An extraordinary fight took place in 1936 on the pier between two groups, mostly from two local families (one of them, funnily enough the same father and son who had helped rescue the yacht 2 years earlier). The trigger seemed to be some positioning of fishing nets off the pier, but the severity of the violence and length of the brawl suggests this was an unleashing of deeper, long-held rivalries between two families, both looking for status and position in the community pecking order – almost Scottish clan like, by the sounds of it.

Even swimming can be hazardous near the pier. Three teenagers got into trouble 100 yards from the pier in February 1936. One managed to struggle ashore, one was rescued, but one sank and had drowned by the time his body was found.

Shortly after this tragedy, funds were raised to form a life-saving club at Seaford. All the existing clubs from Mordialloc to Frankston put on a life-saving display at Seaford Pier to help raise money. Sadly, even with a life-saving club in existence, another teenager on a picnic party drowned while swimming near the pier in 1939.

In December 1946 the same local councillor who had been involved in rescuing a yacht in 1934, and then the fight in 1936, was still active and vociferous on the council. “If the end of the pier wasn’t urgently repaired,” he said, “it would be the end of the pier.” Just weeks later, his fears were almost justified when three sharks were spotted near the end of the pier, the shark sirens were sounded, and 1000 people then rushed onto the pier to look. As the life-saving officials said later, the pier is not certain to be strong enough to take so many people at any one time.

The pier’s rotting state led to further vociferous campaigns for thorough repairs. Councillors argued that the pipes running along the pier were vital to the water purification system from the nearby creek, and if the pier collapsed, the whole of Frankston risked facing a health epidemic as a result.

By late 1949, planks on the Seaford Pier were still missing, the pipes had begun rusting, and disagreements continued over who should make repairs. It looks as if repairs were undertaken, as news clips about the problem dried up into the 1950s.

Tragedy continued to crop up near Seaford Pier, though. In 1954, a freak wave threw several school children off a sandbank near the pier. Two of the kids drowned, as did a teenager who dived in to try to help rescue them. The incident happened about half a mile south of the pier; 50 kids were on a supervised visit to Seaford from urban Richmond. Many were caught out by the freak wave but survived; the teenage girl had saved two but died when going back in to try to save a third, who dragged her under with him. It sounds like a horrendous accident. I wonder if anyone is still alive today who remembers that day?

Other links and writings on Seaford Pier

I didn’t find many people who have written about Seaford Pier. There is a piece on the Melbourne Playgrounds site.

The Poms in Oz page had a discussion board in 2012 about yet another boy who lost his life in the water near Seaford Pier.

What are your stories and memories of Seaford Pier?

Does anybody have any stories from the past to bring Seaford Pier up to the present day from the date of my last story off Trove in 1954?

Does anyone still alive have any recollection of the freak wave that caused such tragedy in 1954?

Or just get in touch with a comment on your own experiences down at Seaford Pier, or in the waters around it.