Inverloch Jetty still marks the entrance to Anderson Inlet. Steamers no longer drop passengers off, and surfboarders are now a more common sight than swimmers near the pier.

Inverloch Jetty is a discreet little pier between Phillip Island and Wilson’s Promontory. 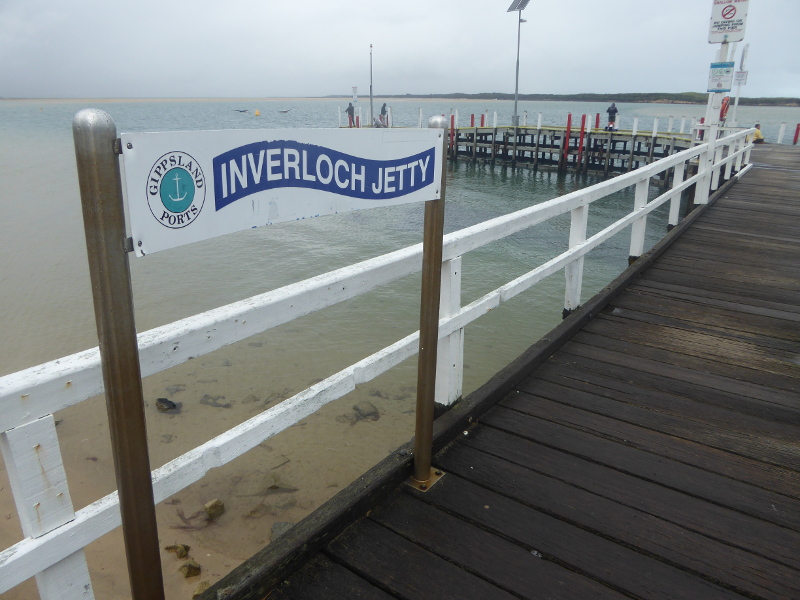 It’s not really the kind of pier you’d go to for a promenade, though a small group of people did just that as I ran for shelter from the rain shower that hit as I got to the end. 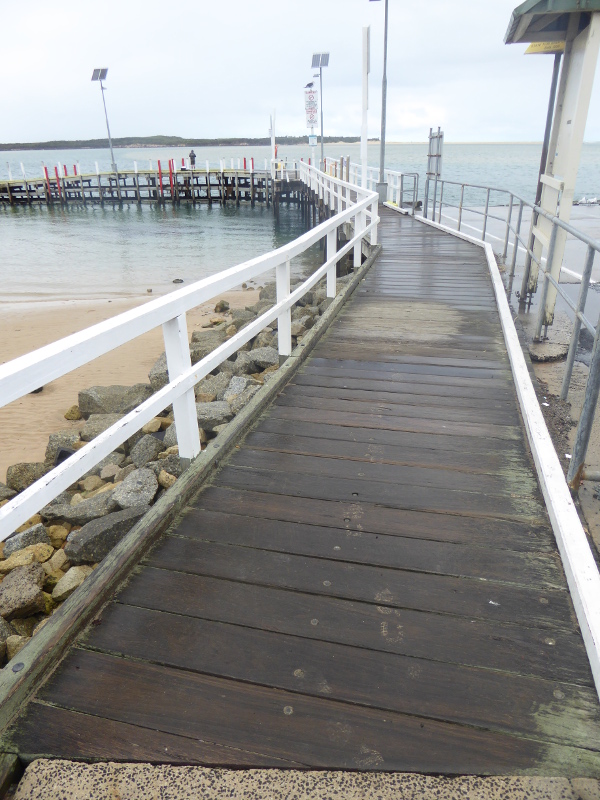 The jetty is less than 100m long, so it’s not a massive race to reach shelter if you are caught out. There is no shelter on this pier, and the nearest place to sit down even is back on shore near the car park, where there are a few benches looking out over the bay. 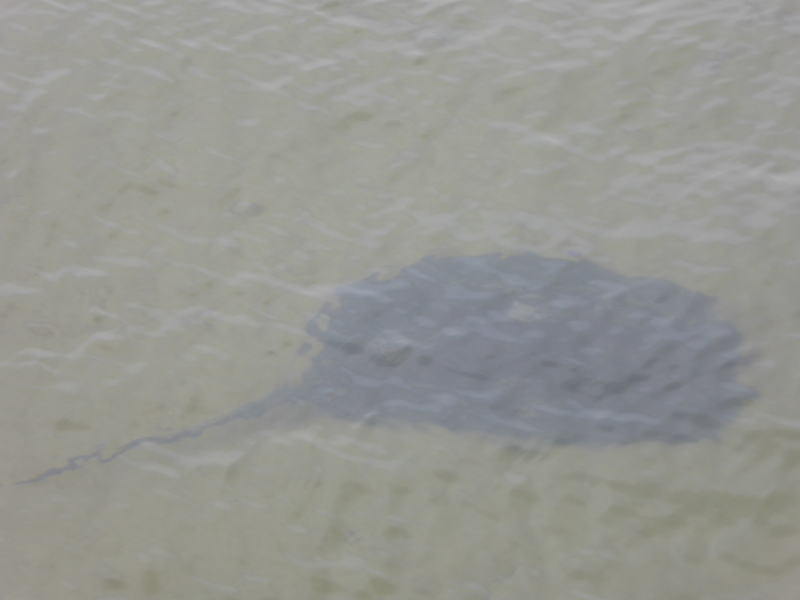 It was the wildlife I was struck by first at Inverloch Jetty. Just as I arrived on the boardwalk, this superb stingray glided underneath my feet (fortunately a good few metres below me, of course). 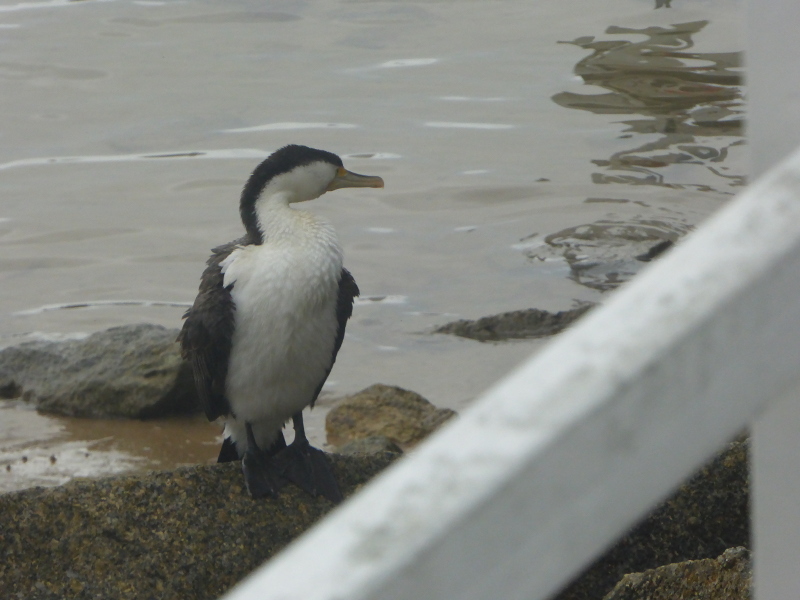 And some of the birds looked very much at home on and near the pier. 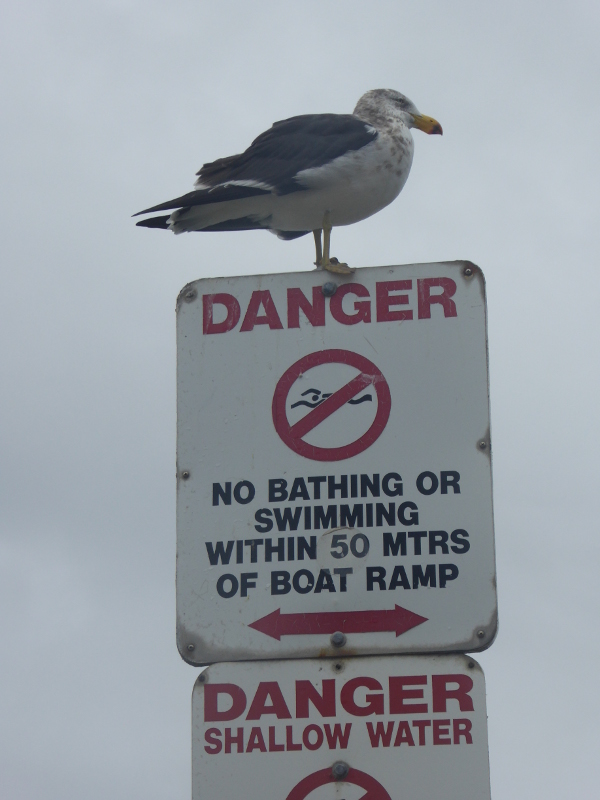 On this chilly morning, there was no need for the warnings about swimming here. The only other humans on the pier being a little cluster of fishermen. 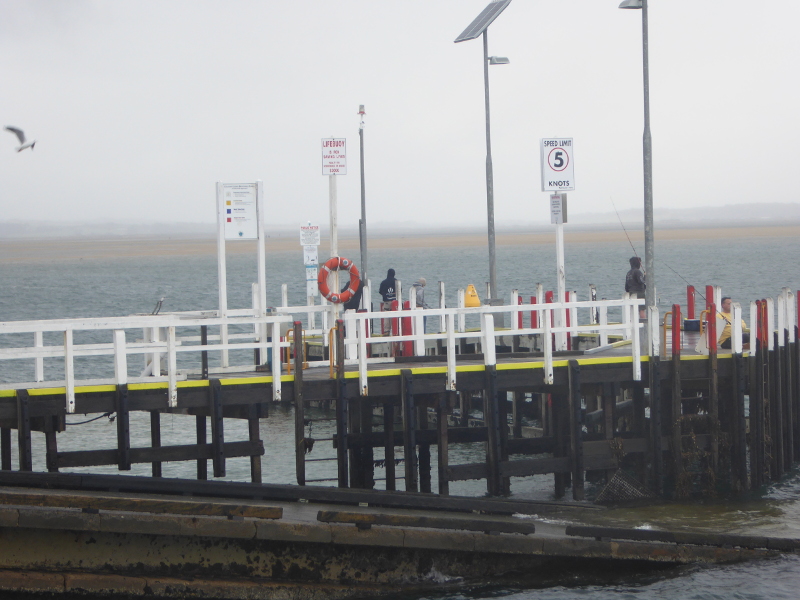 To be honest the place barely merits a mention here on Vintage Victoria, but having retained its boardwalk for the first 75m or so as the jetty curves slightly round to the left, it does meet my criteria, and it is placed at a particularly beautiful spot. 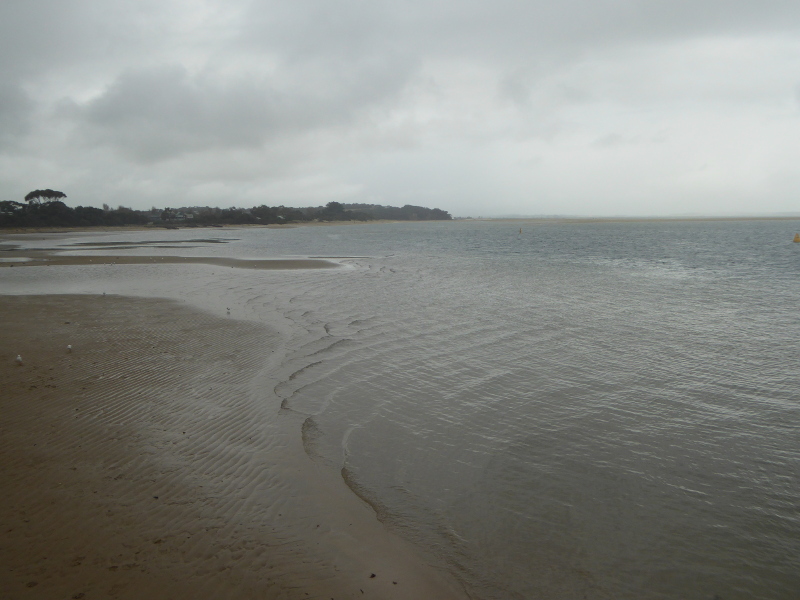 You see this is the entrance to Anderson (or ‘s) Inlet so Inverloch almost marks the spot where the inlet begins and the open seas end.

To the left as you stand on the pier is the Inlet, calm and open, a wide expanse of water leading up to Venus Bay and the Tarwin River, which flows into the Inlet. 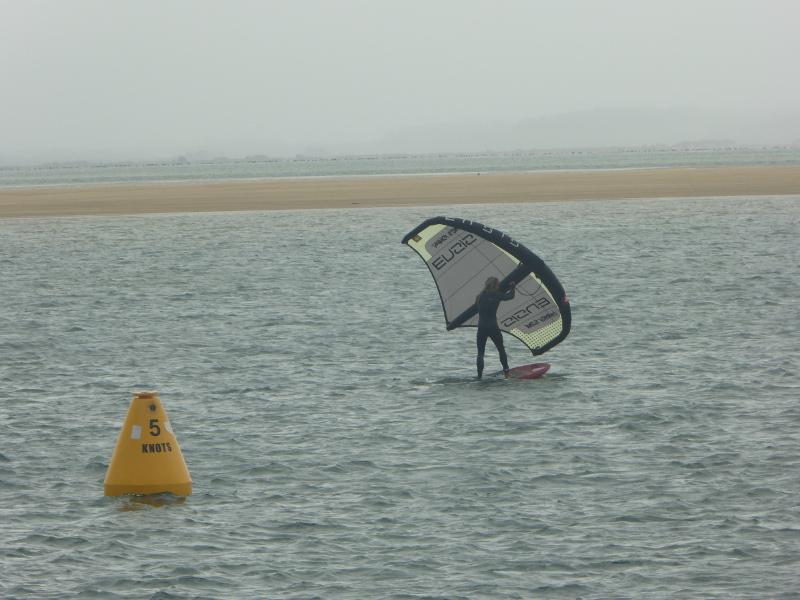 This surfboarder opted (wisely in my view) for safety and calm of the inlet waters, while a handful of fellow boarders took their chance in the open waters to the right.

Reading my history of Inverloch Jetty before coming, I knew how critical that choice can be, given that there had been a fair few tragedies hitting those who got caught up in the currents taking the waters out of the inlet towards the ocean.

You could tell from the strip of dark water right in front of the pier alongside the yellow tint to the water just to the right and the ocean side which suggested shallower sandbanks that the depth and currents round here must be quite deceptive. You can see how inexperienced swimmers might get into trouble. 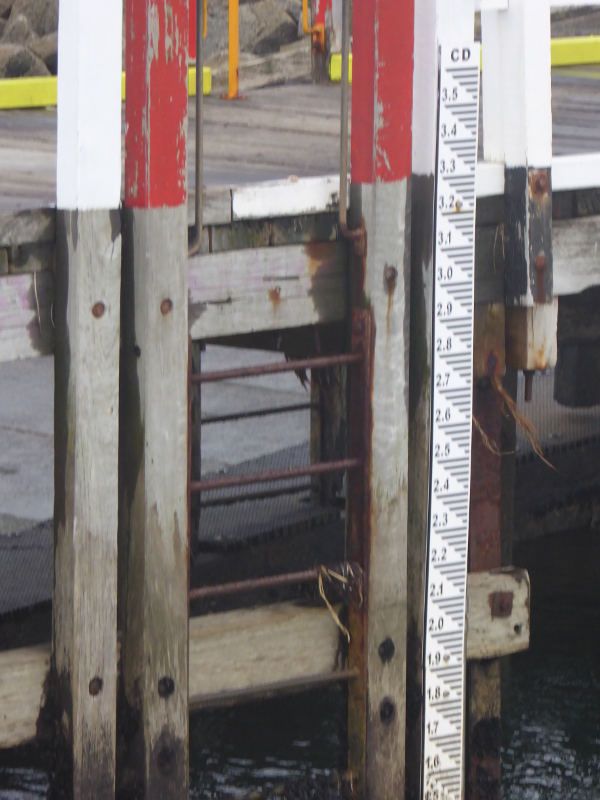 Judging by these depth markers, the water at the jetty can get pretty deep, mind you. And just by the carpark is a wooden staircase down to the sands which has been roped off due to damage by erosion, so the seas must also get fairly rough sometimes down here.

It’s hard to tell where the bathing enclosure used to be 100 years ago, and strangely there is no mention of sea baths at Inverloch in Bruce Bennett’s excellent compendium of Victorian Sea Baths. 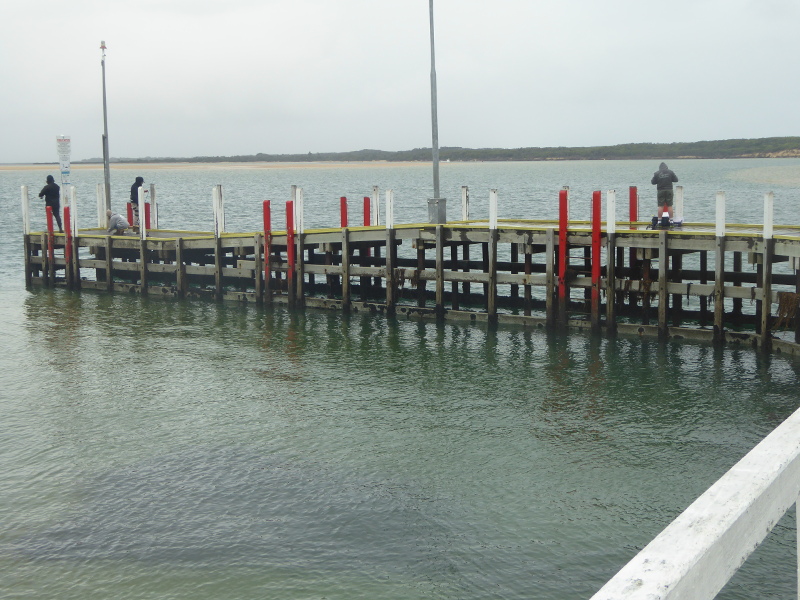 I’m glad I came to Inverloch, if only to see the entrance to the Inlet – and to see that stingray! It probably isn’t a ‘destination’ pier for real boardwalk buffs, but it’s a compact little structure, and it does have a history, so I was glad to be there for Vintage Victoria

No shelter or seats on the pier itself

History and stories about Inverloch Jetty

In 1897 a teenage boy drowned on Boxing Day when bathing about a mile from the Jetty but got caught in the current and was pulled under.

In 1904 a steamer ran onto rocks near the entrance to the inlet (called by many, including most newspapers at the time, “Anderson’s Inlet”, but according to the entry on Wikipedia, this is incorrect and it should be known as “Anderson Inlet” – now, I’m first in the queue of most pedants, but this does seem a small matter, especially as the apostrophised name seems to have been so widely used for over 100 years, but I’ll bow to those that know better than me…). Anyway, having been tugged off in high water, this boat got snagged again on rocks near the pier at Inverloch, so had to wait for another high tide before finally getting free. Little damage was incurred, thankfully.

In 1910 there were plans to widen the pier to help shipments of coal. Punch Magazine has a 1910 photo of bullocks drawing a cart full of coal onto the pier, with a steamer in the background, presumably ready to load up a shipment. (Punch Magazine 6 January 1910).

In 1932 a local teenager went fishing in the inlet while his parents were away, but a strong wind blew up and he was pushed out to sea. There was no sign of the boat or the youngster, who was presumed tragically drowned.

In 1935 there was the horrible murder of a 12 year old girl ten minutes walk from the jetty. Tragically the girl and her friend, who had been playing in and near the water at the jetty all day, decided to go and buy an ice cream from a shop 200 yards from the pier. They got separated in the crowd afterwards, and the poor girl was taken, and brutally murdered. There were an estimated 12,000 people in Inverloch on that New Year’s Day. I believe a man confessed to the crime some months later.

November 1938 saw a more positive story, when a 3-year-old girl fell into the water off Inverloch Pier. An unknown man dived in fully clothed and pulled the girl out. She was unconscious for 20 minutes but recovered after constant resuscitation. The Gippsland Times didn’t name the girl, though her parents were called Hutton and lived in Yallourn. I wonder if she is still around today and remembers the incident? And did she ever find out who saved her life?

Was Mr J P Dell that man? A news report in 1953, in telling of his death at the age of 77, remarked that three times in his life he had made rescues from water while fully clothed. One of those was said to be off Inverloch Pier…

Other links and writings on Inverloch Jetty

According to this local newspaper piece from 2017, the stingrays near the jetty are a local icon, and residents were upset when two of these fine beings were killed.

The Simple Things Traveller blogger visited in April 2019 – very different conditions that day from my experience.

The Inverloch Historical Society has some fantastic old photos of the jetty.

This short article from a local newspaper in February 2021 shows that swimmers still get into trouble in the water near the jetty even today.

Simon Hahnel caught the stingrays by the jetty on video and published this small clip on his YouTube channel.

What are your stories and memories of Inverloch Jetty?

Does anyone know if the little girl who fell into the water near the jetty in 1938 is still alive today? If so, can she remember the incident?

Does anybody know when Inverloch Jetty was originally built?

Or just get in touch with a comment on your own experiences down at Inverloch Jetty, or in the waters around it – any swimmers or surfboarders reading this?