An enormous fire destroyed the cinema which stood on this spot in 1929. The building they replaced it with still stands today as the Capitol Cinema, though it opened as the Warrnambool Theatre.

The frontage of the Capitol Theatre in Warrnambool is what makes this one of my favourite vintage cinemas in Victoria (well, outside Melbourne anyway). 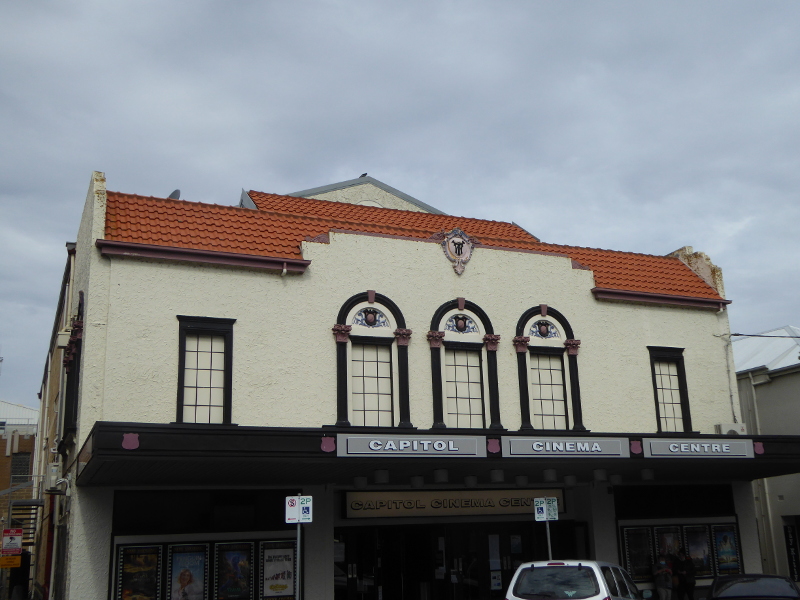 We made the most of the Labor Day weekend to go and see a film, something we’re managing a little more often in 2021 than we did in 2020. 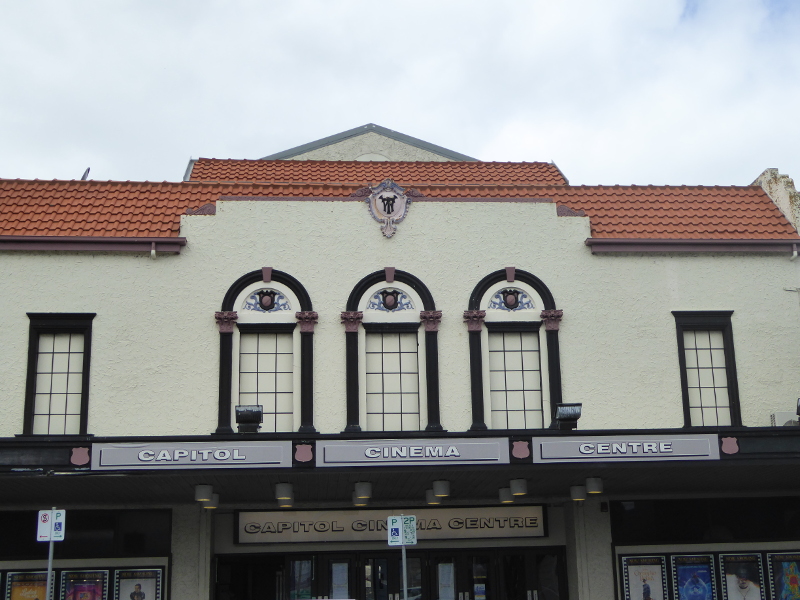 I wish, though, that I’d done my research into the history of the Capitol before our visit. I’d love to have known about how the building was completely rebuilt in 1929/30 after fire gutted the previous cinema that had stood here. 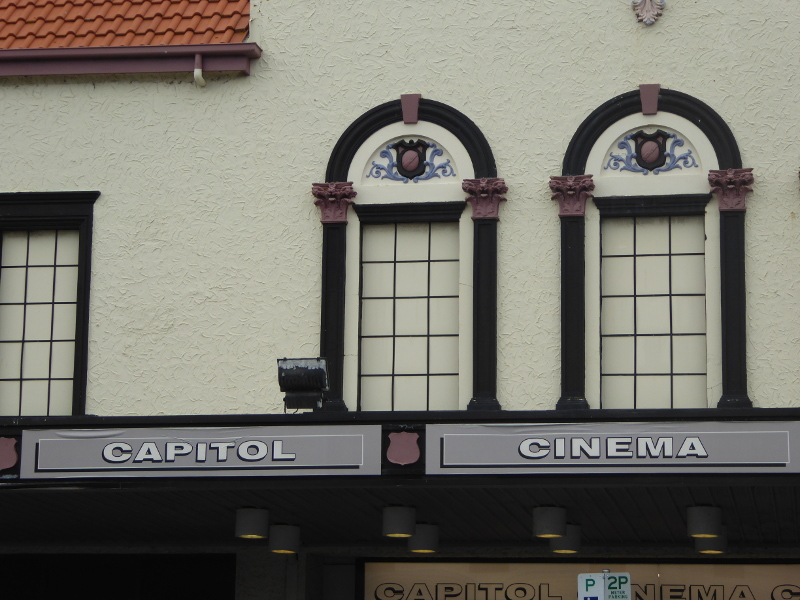 Thankfully that façade of the cinema remains still today, with its stylish windows, 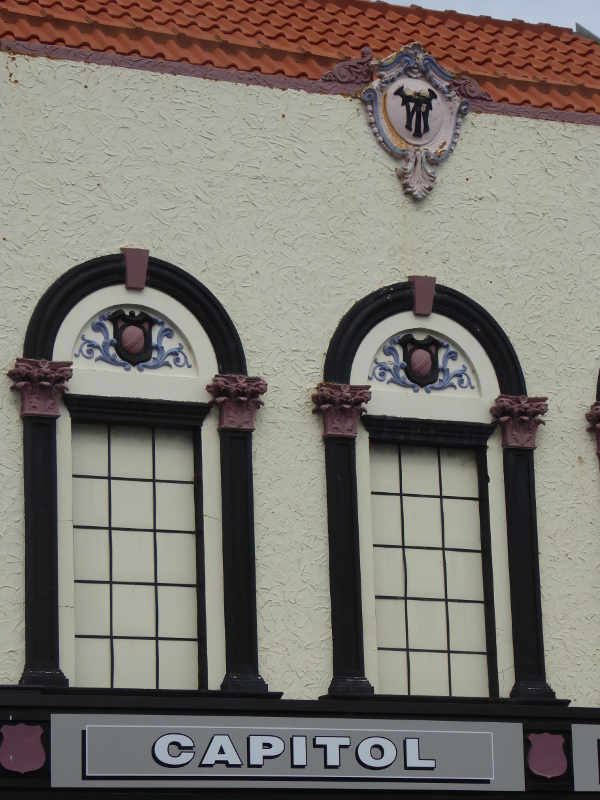 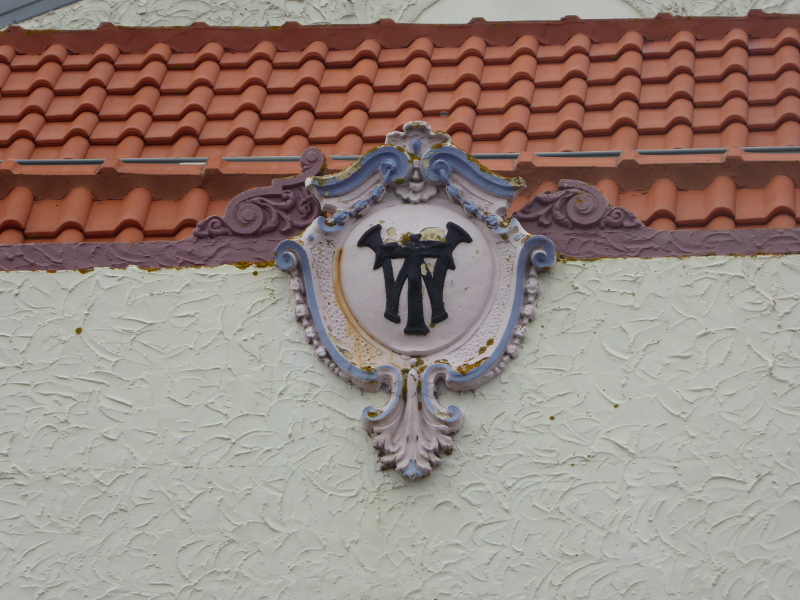 I’m also not sure what the design here represents, including the coat of arms – can anyone help? 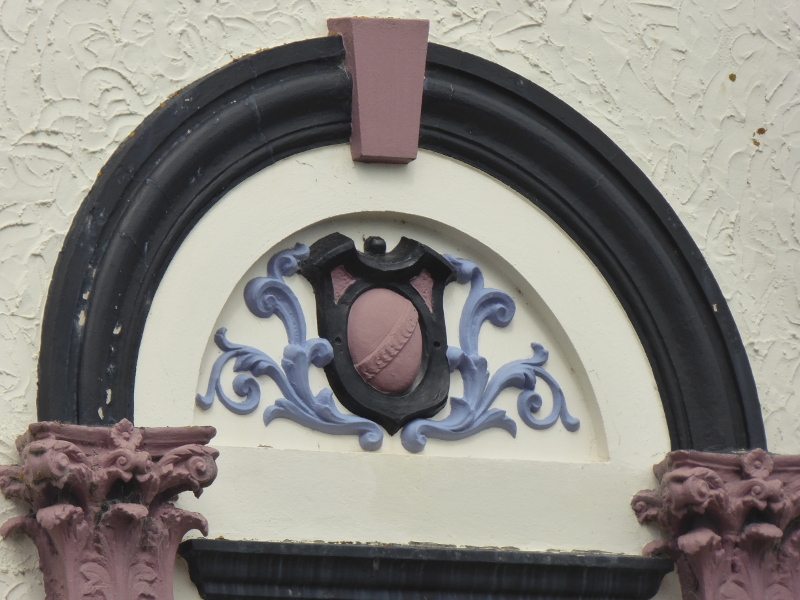 The whole building is just very easy on the eye in a way art deco always is. I love the way even the windows around the side wall of the cinema keep the same style, though I’m guessing this is because once upon a time these looked out from the upper floor leading into the dress circle. 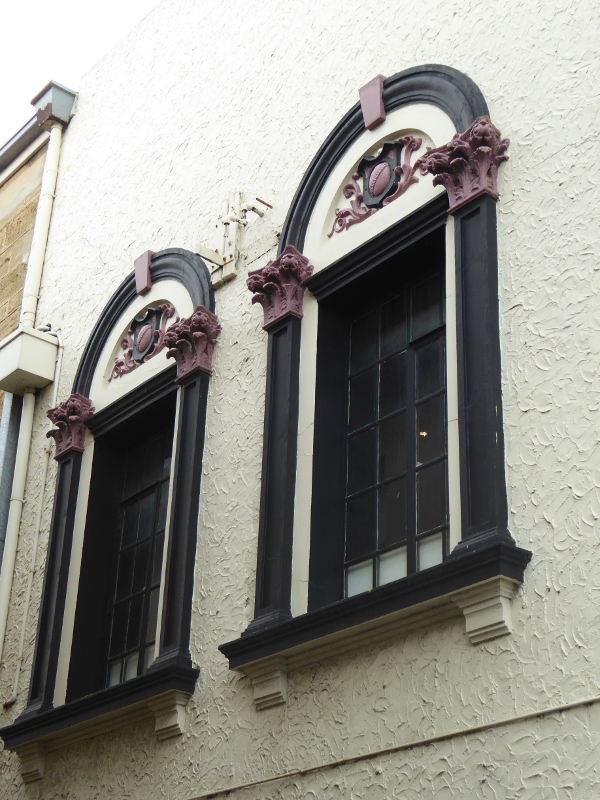 Now, I had a sneaky look at the Capitol Theatre’s Instagram site and spotted a couple of photos of the main screen room today, with many original features from that 1929 theatre.

Because the film we chose was down in one of the smaller rooms, which have been completely refurbished in more recent years, we had no vintage interiors to admire, so for our next visit, I’ll definitely be looking to see a film in Cinema 1, upstairs.

Actually, there must have been some kids’ animation film on at the time we visited, so as there was a regular to-and-fro of little ones to the toilets, I did sneak in here too for a brief look, and can confirm that this is the Cinema to go to if you love to sit among vintage features. 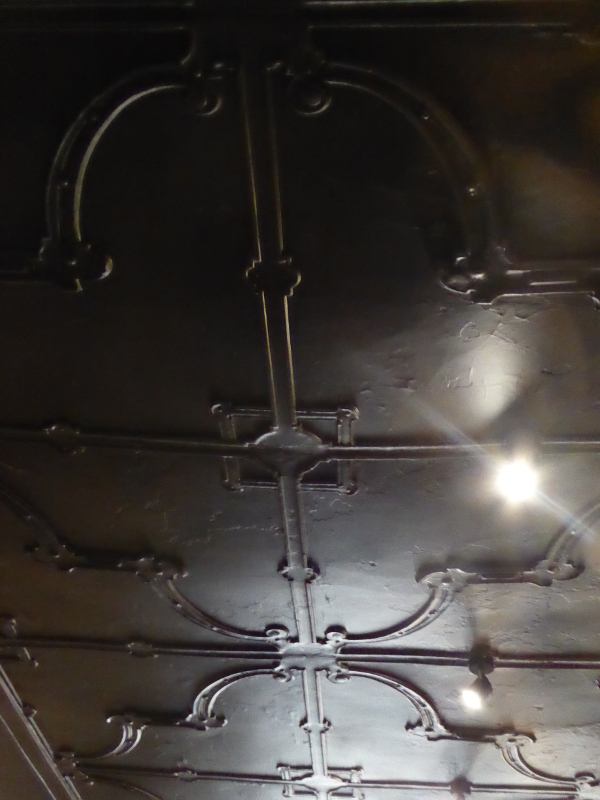 I had to make do with a brief photo of the ceiling up here on what must have been the dress circle entrance. 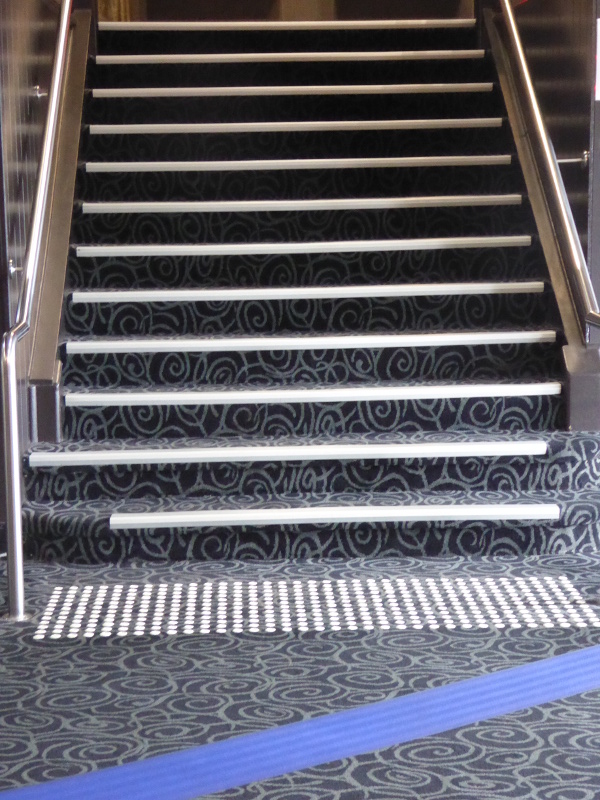 And I don’t think the staircase in place in 2021 is the original, unless they made the stairs unusually subdued for the period. 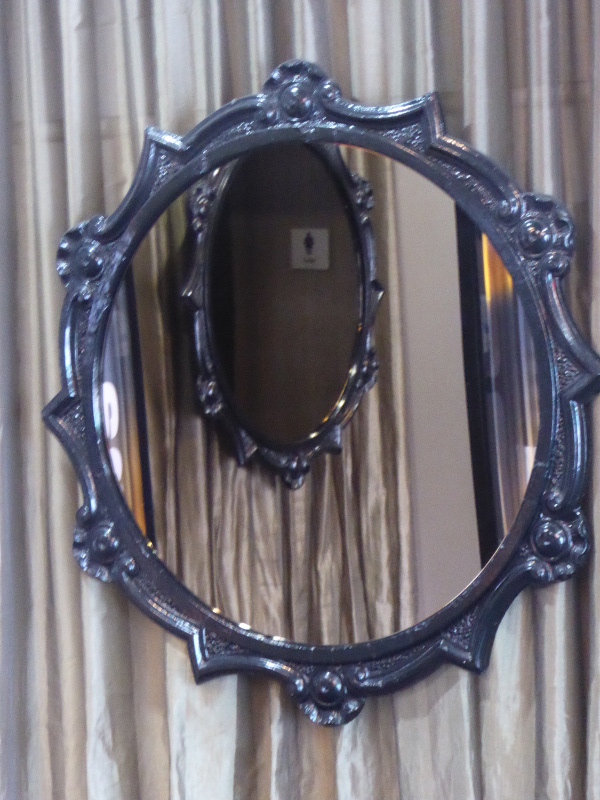 I did like the vintage touch the current management have put in place down in the foyer. These mirrors today (sorry for the unintended shot of the Ladies Toilets via the second mirror) were apparently the frames for noticeboards of films showing or upcoming (thanks to the Capitol Instagram page again for that snippet of information). 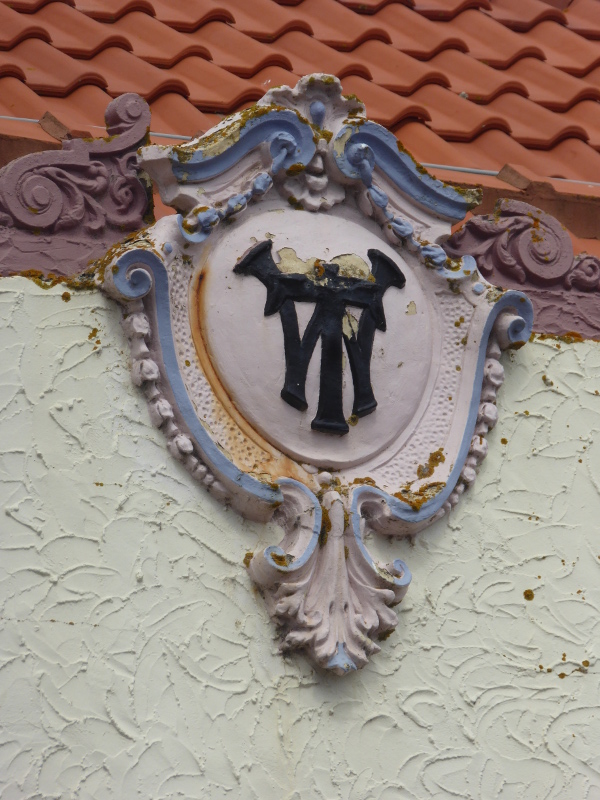 I think they’ve done a great job preserving this vintage cinema in Warrnambool. We thoroughly enjoyed our visit (and staff all really friendly); just make sure you get to see a film in Cinema 1 if you want the truly vintage experience…

History and stories about the Capitol Cinema, Warrnambool

“The most disastrous fire in the history of Warrnambool,” in February 1929, completely destroyed the hotel and picture theatre which had stood on the site where the Capitol stands today (and the hotel on the corner, which is clearly of a similar vintage to the cinema).

I haven’t seen photographs of the original picture theatre, but the destruction enabled a completely new start, with art deco architecture which has stood the test of time and still looks fantastic today.

The hotel on the corner was called the Mansions, and the Mansions Picture Theatre opened in 1920, so was running for almost 10 years before disaster struck. Interestingly, given problems faced by the Capitol some 30 years later (see last paragraph below), the Mansions had criticism from the Public Health Commission, which seemed to suggest the buildings had been built without the appropriate attention to public safety (the cynic in me wonders if somebody had a bit of a grudge against the cinema, since similar criticisms were made in the 1950s over the totally new building…In the 1920s it concerned a septic tank; in the 50s, the men’s toilets in the stalls…)

Work began quickly on replacing the buildings gutted by the fire, and within a few months artist’s drawings of the proposed new theatre were published. It was billed as being ‘a modern adaptation of the Mediterranean style,’ and it looks remarkably like the Capitol Cinema today. The New Warrnambool Theatre, as it was known at first, opened in April 1930, with seating for 1150. The opening night got a brief mention in Melbourne newspapers, but all they said was that the film shown on 12 April 1930 was a talkie – anyone know what they showed?

One article describes the ‘imposing staircase rising from the vestibule to the main foyer above and the dress circle.’ I’m not sure today’s staircase is the original as I would not describe it as ‘imposing’, but if someone knows better, please correct me. The stage was to be decorated with a large proscenium arch and ornamental boxes on either side. There was a big mural depicting Adam & Eve on the main wall of the auditorium.

By 1936 at least the theatre had become the Capitol, with an advert in that year billing the biopic ‘The Story of Louis Pasteur.’ I noticed the way the advertisers pushed the film was by playing to the needs of country folk not to lose touch with what the fine people of Melbourne are doing or talking about: the film had been playing to packed houses in the capital three times a day, said the billing for Warrnambool’s Capitol.

In September 1938 the theatre hosted a sacred concert party to raise funds for the Warrnambool Hospital appeal. Manager Mr Pearson authorised this.

In 1947, the Warrnambool, Hamilton and Camperdown bands gave a concert at the Capitol to mark the city’s centenary. And in one of the last stories available on Trove, the Vienna Boys Choir gave a performance here in 1954. Wouldn’t it be great if any of those boy members were still around today to remember the tour they made round Australia?

In 1949 the Capitol Theatre hosted the Warrnambool section of the “Queen of the South” beauty contest, with the local winners heading to a grand final in Portland, and the overall winner getting to spend a week in Mildura, with some prize-money to spend! Not sure that would encourage too many entries these days, but the Portland Guardian reported the motto of the competition as, “You’ve got to be in it to win it!”

The theatre got into trouble again in the mid-50s for not complying with orders to make changes required by the state Health Commission. There was a threat of closure in 1955 if the changes didn’t happen: these were, adding a men’s toilet for the stalls area; better ventilation; and an extra exit from the projection room. By 1955, Mr Thornley, who had previously managed the Capitol Theatre in Melbourne, had taken on the Warrnambool theatre, but Trove runs out of stories, and I have no idea how this story ended up, or when (whether) the cinema closed due to TV, like many others?

Other links and writings on the Capitol

This Cinema Treasures entry on the Capitol, Warrnambool speaks of a 2009 fire damaging part of the upstairs screen – I hope they didn’t lose too many original features?

Another ABC article ahead of the cinema reopening in 2010.

The Cinemas Project has a brief history of the Capitol also

CATHS the Australian cinema and theatre database has a lovely picture of the auditorium at the Capitol – the one I didn’t get into. I hope this is taken after the 2009 fire?

What are your memories of the Capitol Cinema, Warrnambool?

Have you ever seen a film at the Capitol? What’s your favourite memory of the place?

Can anybody reassure us that none of the original features were destroyed in the 2009 fire?

Can anyone update us on what happened to poor manager James Thornley in the 1950s when confronted with rules on toilets?

Is there anybody around still who can remember the ‘Queen of the South’ competition taking place at the Capitol?

What about the 1954 concert by the Vienna Boys Choir? Anybody remember attending? Or any Viennese who performed?

And finally, how about today’s staircase? Am I wrong and this is the original staircase of 1930; or if this is a modern replacement, can anyone remember the original being in place?